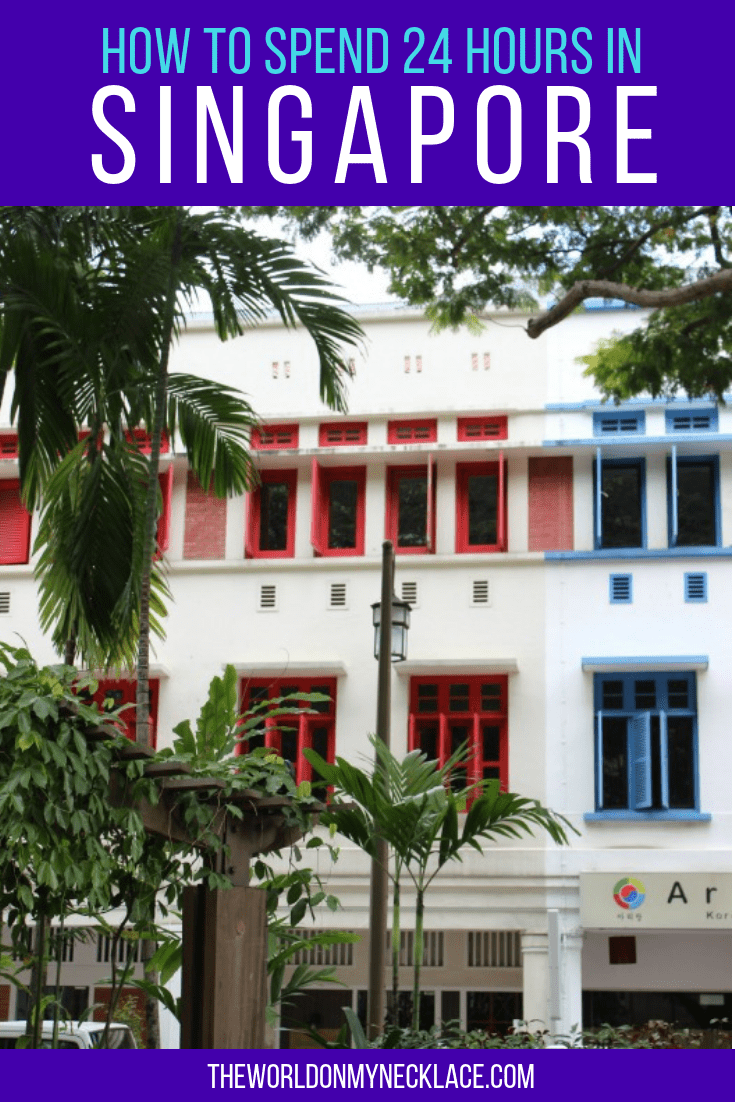 Flying anywhere around Christmas time is bound to be expensive. Flights between Sydney and South Africa were no exception.

After spending hours finding the cheapest flights possible, we ended up splitting it in half and getting return flights from Sydney to Singapore and Singapore to Johannesburg.

We knew it was cheaper to fly via Asia and as the only time I have stepped foot on the continent was 20 hours in South Korea a few years back, I knew it was about time I had myself an Asian adventure, if only a mini one to start with.

So we decided to spend 24 hours in Singapore on the way over to South Africa and then another four nights on the return leg. A cushion between long haul flights and a decent amount of time overall to visit a city that is generally popular for short stopovers. I was excited!

We arrived in the early evening, full of expectation but weary from the long flight. We have friends that live in Singapore who we planned on staying with on the way back but for our first short stop in the country we decided to treat ourselves to a fancy hotel stay.

There are so many incredible hotels to choose from in Singapore, and I found a great deal for the four star Dorsett Hotel located in Chinatown. As soon as we pulled up outside, I knew I had made the right choice.

Modern and elegant with a sleek interior, the hotel lobby was grand but welcoming, with a large Christmas tree taking pride of place in front of the Reception desk. A giant crystal chandelier hung from the ceiling and a piano played tunes in the corner.

What stood out to me the most about the hotel were the funky touches that gave the Dorsett a distinct personality that so many other high end hotels lack. Each guest room had a colourful camera with the room number on it outside the door, and modern artwork adorned the halls. Our room was reasonably small but I loved the dark décor which made me feel warm and cosy, like we had our own little luxury cave.

I am not a fan of Ikea and in regards to decorating, I dislike when it is all cream and white: it was so refreshing to see something different. It was almost masculine but I really liked that. The bathroom was beautiful with mosaic tiles and colourful complimentary toiletries, as well as a two way opening wardrobe that opened into the room as well as the bathroom, and contained fluffy bathrobes and complimentary slippers. Our friends were waiting down in the lobby for us otherwise I think I would have just stayed, drooling over the room, but it was time to see the Christmas lights along Orchard Road.

A busy shopping street lined with Malls wouldn’t usually be my first stop in a new city, but I do love Christmas lights and they were indeed impressive. Multi-coloured strings of lights with baubles dripped from the trees and were strung across the road in glittery displays. There was no doubt that Singapore celebrated Christmas in a BIG way and threw a lot of money towards doing so. The streets were crammed with Christmas shoppers and we virtually had to elbow our way along the footpath but it was still a worthwhile experience, especially because it ended with delicious dumplings at the Food Republic food court. It felt like I could have been in any first world city around the world on Orchard Road so I couldn’t wait to explore what made Singapore distinctly Asian the next day.

After a good night’s sleep, we ventured out to explore the surrounding Chinatown in the early morning hours. We took a quiet pathway through a green strip of parkland bordering the southern edge of Chinatown and I finally started to feel that we were in Asia. Large trees draped in vines rose up around the path, a brood of chickens pecked at the rich soil and a rooster crowed from his perch on top of a tree stump.

A few locals wandered slowly past us but otherwise there was no one around. Everything was so green. This felt more like the Asia I dreamt about. The Chinatown streets are lined with beautifully restored shophouses of various colours, many of them recessed on the ground story, so that you could walk under cover, through a tunnelled footpath. Very handy for when it rained.

We saw small shrines on the sidewalk, burning incense and offering various foods and drinks to a particular deity or ancestor. Shoes were haphazardly strewn in front of the intricately carved and colourful Sri Mariamman Hindu Temple, very similar to the temple we visited in Nadi: the owners of the shoes praying inside.

The streets were peaceful. We grabbed lattes at an expensive joint called The Alley then ate possibly the worst breakfast I have ever had, a fishy Mee Goreng at a small low budget Restaurant. We were lucky to have a late checkout of 12pm at the Hotel so we went back to enjoy some time by the pool as the temperature started to rise with the day.

The Dorsett’s pool was located in a quiet spot of calm in the city, with wooden decks and frangipani trees surrounding it. A swim in the beautiful blue and green tiled pool was exactly what we needed. Checking out at the very last minute possible, we took a walk along the murky waters of the Singapore River and to the famous Merlion fountain, with a view over to the even more famous Marina Bay Sands. I always enjoy seeing attractions that I have previously only seen pictures of, it gives you that “I made it!” feeling, but I much preferred ogling the regal Fullarton Hotel; a white washed colonial extravagance that dominates this part of the river.

I also enjoyed just wandering riverside and walking through the lush Fort Canning Park with its gnarled fig and banyan trees and shaded pathways. It all felt so exotic. The Malay Muslim neighbourhood of Kampong Glam was high on my list of suburbs to visit and it lived up to my expectations, despite us not having much time there.

Narrow streets wind through this vibrant community of trendy cafes, tightly packed shophouses selling textiles and Persian carpets, and colourful street art. The palatial golden domed Sultan Mosque peeks out in all its splendour above the building tops. I would like to explore more of the area’s hidden corners on my next visit. Our last stop during our 24 hour stint in Singapore was to Little India. I found it an area lacking in charm as we walked along the chaotic main street past numerous cell phone and sari shops.

It was frenetic and dirty, something I may have found exciting had I not been feeling the effects of the stifling heat after a day of walking in it. The male to female ratio was about 10:1 as there are a lot of male migrant workers that come over for better salaries so that they can send money back to their families. I will have to give it another chance in the future and perhaps look for quieter side streets to explore.

The heavens opened for the regular afternoon downpour, cooling everything down dramatically. Just in time for us to head to the airport.

Singapore Airport provided thrills of its own with its beautiful Butterfly Garden, complete with cascading waterfall, and its roof top cactus garden. I can definitely see why it is consistently rated the top airport in the world. My time in this world class city was short but sweet, and anything but boring. I couldn’t wait to get back and explore more a few weeks later. 18 Comments on How to Spend 24 Hours in Singapore