France
This post may contain affiliate links. If you make a purchase through an affiliate link, I will earn a commission at no extra cost to you. Thanks for your support. 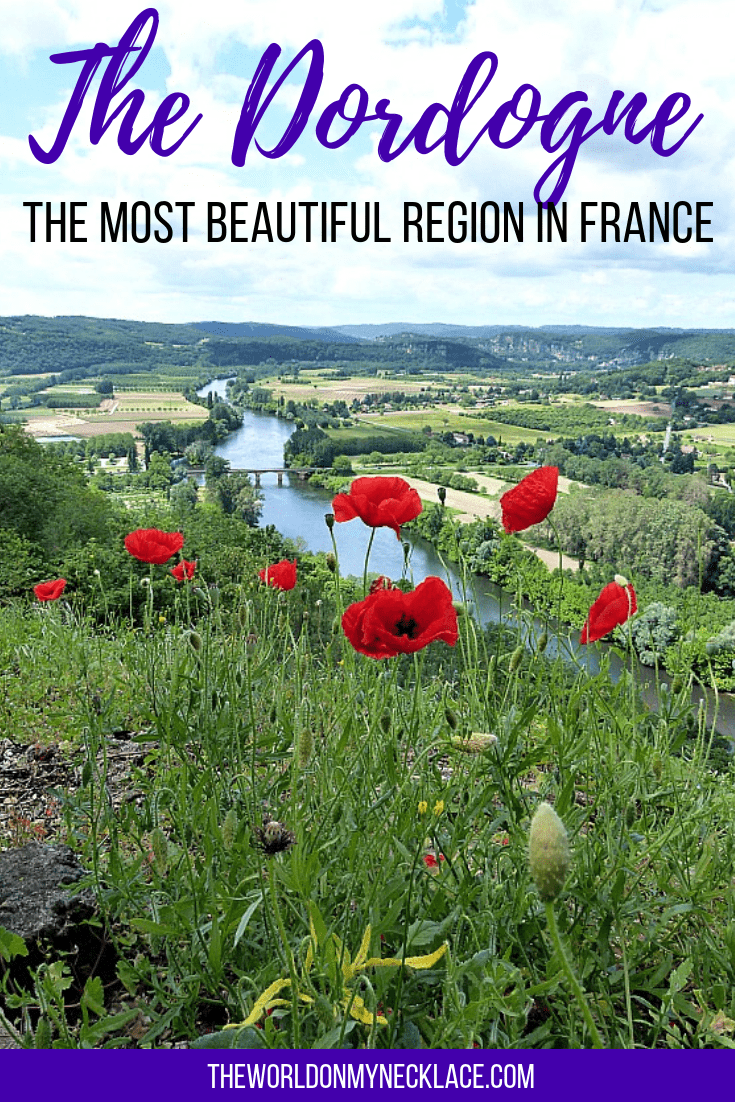 What do you think of when you think of France? Paris maybe? Or the Cote d-Azure? Or maybe even the D Day beaches of Normandy or the lavender fields of Avignon?

Me too. Well, until I went to the Dordogne. Now I think about the emerald green meadows, limestone cliffs, chateau dotted hillsides and the winding river of the same name that runs through it all. The Dordogne is where it’s at!

To be honest, although I have had a fascination with France from a young age, I had never heard of the Dordogne. It only popped up on my radar after living in London for a couple of years. A few English friends had holiday homes there and I was told by many people that it is the most beautiful part of France.

When my Mum and step-Dad were planning to visit in summer 2012 and said that they wanted to go somewhere in France, where Trav and I would then join them for a few days, I suggested a couple of different regions that incorporated beautiful scenery and traditional French villages. Lucky for me they chose the Dordogne.

They found an apartment to rent for a week in the small town of Bergerac. We joined them for four days of exploring, and what an amazing four days it turned out to be. Trav and I flew into Bordeaux and rented a car, driving the 90 minutes to Bergerac through rolling green hills and burgeoning vineyards.

Bergerac is a beautiful town with cobbled streets and a tidy main square lined with restaurants and boulangeries. Flower pots crowd the windowsills of half timbered buildings with colourful blooms.

A Big black Labrador was splashing around in a large fountain in the main square, watched over by an imposing statue of Cyrano de Bergerac – a dramatist of the seventeenth century who was immortalised in a play that centred on his unusually large nose. Souvenir Shops in Bergerac featured items relating to him and his snoz. The town sat on the banks above the Dordogne River, with the historic centre ringed by a modern, bustling hub of conveniences such as supermarkets and fashion boutiques.

We managed to find Mum and Robbie’s apartment which was a light filled and airy loft, overlooking one of the narrow streets and a busy restaurant in the historic centre. It was a scorching hot day so after dropping off our bags, we asked at the tourist office where we could swim nearby and were told there is a beach at Le Buisson, 60km away.

The ‘beach’ turned out not to be a beach per se, but a grassy spot beside the fast flowing Dordogne river, located beside a stone bridge and in front of a small restaurant playing music.

We joined a few other people and cautiously waded into the swift waters.  The current was strong but we managed to stay rooted to the spot lest we be carried swiftly downstream.

Swallows darted around us as we let the cool water dry on our skin, lazing in the hot afternoon sun. It reminded me of my childhood on the farm, swimming in the creek at the end of our neighbour’s property.

Back in Bergerac we sat in the main square at an al fresco restaurant, enjoying a couple of sundowners before eating at a nearby restaurant where the waiter was friendly and helped us with the menu.

I didn’t love my monkfish but I think that was testament to my general dislike of meaty fish. I probably should have ordered something else. Our further exploration of the Dordogne took us to the small village of St Cyprien, perched beside a magnificent rock with 12th century Bell tower perched on top. Luckily for us it happened to be market day and there was some incredible produce for sale down the long and narrow main street.

We bought some goats cheese and strawberries and sampled many other fragrant fresh cheeses and duck salami which was very good. We wandered leisurely up the winding roads to the bell tower at the precipice of the town.

There’s something special about getting lost in the winding lanes of small French villages. Further along the river is Castelnaud and it’s magnificent Chateau, one of over 1000 Chateau in the Dordogne. Mum and Robbie went into the Chateau but Trav and I were more keen to explore the impossibly cute town surrounding it instead. We meandered the narrow pathways to a small stone church with a spectacular viewpoint over the bucolic countryside of a deep, rich green. More than anything, I wanted to just walk out into those verdant fields of French beauty.

Road trips are great but sometimes you just want to STAY somewhere and really soak it in. In my opinion,this is best done by walking. I managed to restrain my wanderlust and we met Mum and Robbie back at the Chateau before heading to a nearby restaurant that offered affordable three course lunches.

We ate delicious goats cheese salads followed by a disgusting pork confit which was tough and jellied which reminds me all too much of cat food. Luckily dessert redeemed the meal and was a perfect creme brûlée. Cheese and desserts are my favourite things to eat in France anyway.

Possibly the most famous place in the Dordogne, La Roque Gageauc, just begged to be visited. My God, it was spectacular. It looked like a French Impressionist painting but with more vividity; a version of heaven on earth.

A small village perched on the side of a cliff overlooking the emerald waters of the Dordogne. Shuttered stone houses lined the river and traditional Gabarre, flat-bottomed wooden boats, cruised back and forth between the petite town and the cliff bound Chateau in the distance. We did the cruise which took an hour to lazily navigate the short stretch of river and back again. The Chateau in the distance was in fact the Chateau Castelnaud and it was an imposing sight, seeing it from below.

Perched high above, it became an impenetrable fortress. Along the way there was also an ancient fort built into caves high in the cliff side but it was closed to the public due to rock slips, otherwise I definitely would have wanted to go up there. Back on dry land we walked the cliffside paths past the elegant houses and flower filled gardens with the gorgeous views only growing in grandeur the higher we walked.

Trav and I got lost (on purpose) and ended up coming down a gravel path and past small farms before reemerging by the river where we started. Wild poppies framed the pathway, a regular sight in spring and early summer in the Dordogne, like daffodils in English villages. Another day in the Dordogne meant another road trip to discover the small villages and countryside of this beautiful region, and busy Sarlat was next on our list.

More of a bustling mid-size town than small village, we had finally found where all the other tourists in the Dordogne had been hanging out. It was packed. Despite this I thought it was stunning with the buildings hewed of honey coloured stone and accented with brightly painted wooden shutters and bursts of spring flowers. Wooden hand painted signs hung above shop doorways. The main streets may have been crowded but once we were exploring the small lane ways, the cacophony abandoned us. Another day, another three course lunch special and this time, all three courses were incredible.

Foie gras with onion jam and crostini, panfried white fish fillet with potato dauphinoise and walnut cake with custard sauce. All served in a beautiful courtyard draped in bougainvillea. It was worth the trip alone. Sated and ready for a return to the smaller villages of the Dordogne, we continued our journey to the sky-high Domme.

Domme sits on top of a rocky plateau, rising high above the countryside and overlooking the lush Dordorgne valley below.

The river looked like a tiny squiggle, sparkling in the distance. After the tight, winding streets of the other villages we visited, Domme felt a lot more spread out with wider streets on a grid system. We traced the town walls along the edge of a cliff and then down some small residential streets. It struck me as feeling almost English (Sacre Bleu!), mainly due to the grey stone cottages and the large number of roses in front yards. It had an unhurried and relaxed vibe that I liked very much. There was a smattering of tasteful souvenir shops selling home wares and crafts. Artists painted the valley below from the vantage point of a spacious square lined with park benches. Domme felt quite different to almost anywhere else in France I had ever been. It was the space. Our last stop in the Dordogne was to the riverside village of Beynac, where the film ‘Chocolat’ was filmed. The village is even more beautiful than it looked on screen.

A grand Chateau is perched high above town and houses squeeze close to the narrow roads that lead up to it. After scaling the heights we sat in the sun on a wall outside the Chateau with ice-cream in hand. A brilliant end to our Dordogne adventure. The fairytale villages and peaceful countryside of this gorgeous region of France utterly captivated us and I was very reluctant to leave. In a country that is already among the most beautiful in the world, we found its pure heart in the Dordogne.