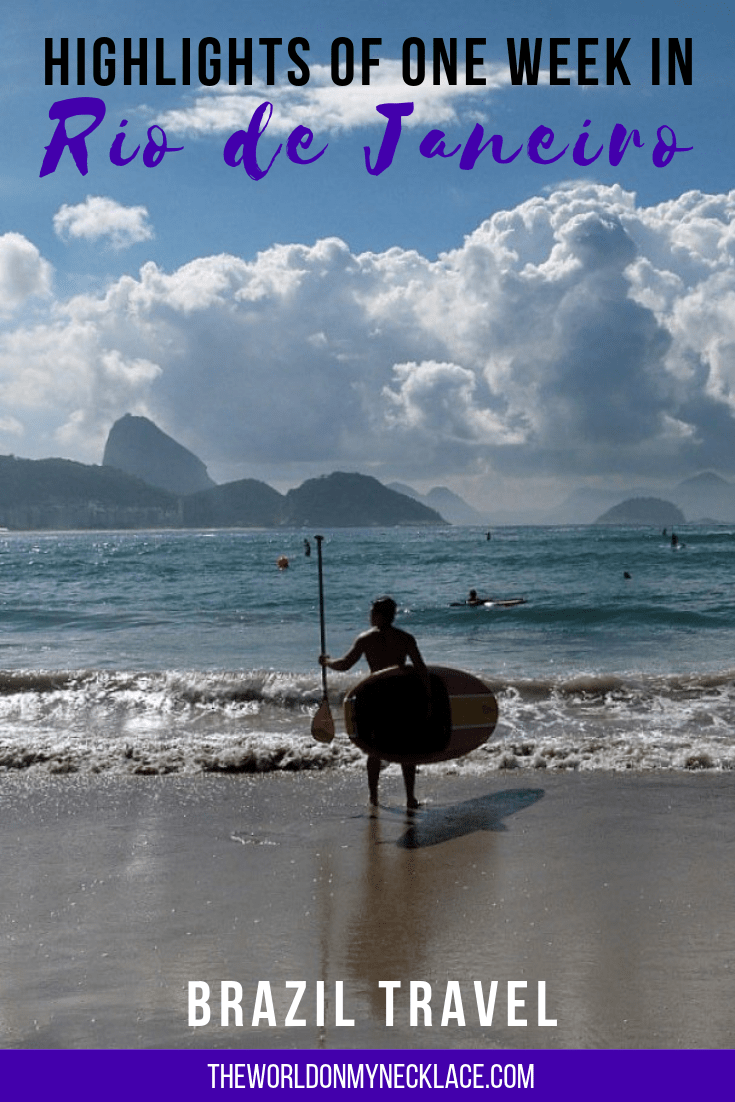 So because we only had a short amount of time left to us before our flight to Toronto, we decided to spend our last week in Rio, rather than rushing around trying to see more of Brazil.

Unfortunately before we could relax, we had to complete 18 hours on a bus to Sao Paulo then change for a 7 hour bus to Rio. This was the longest distance we have traveled in our trip to date and something I am not clambering to do again.

The bus we got to Sao Paulo was a big step down from the luxury we had experienced in Argentina, it was actually worse than a Bolivian bus and that is saying something!

Remember how I told you that in northern Argentina there were a lot of security checkpoints we had to stop at where our bags were searched? Well Brazil has followed suit but in an even bigger way.

We stopped at a big check point and an armed security guard boarded the bus and went through all of our hand luggage, then we had to take our big bags over to a table to be thoroughly checked too.

I thought that they were going a wee bit overboard as we had already crossed into Brazil, shouldn’t they have a more thorough check point at the border instead?

We were held up for a long time and we found out from another passenger that the sweet looking girl that was sitting behind us that was travelling with her teddy bear had a massive gun and a whole lotta drugs in her bag! Needless to say she didn’t join us for the rest of the bus journey and is probably in prison now.

The rest of the trip was very long and frustrating. We had to change buses and wait for over an hour for the new one because apparently there was something wrong with ours.

The new bus smelt like a dirty toilet and we had a very uncomfortable and smelly trip to Rio. We had an hour between buses in Sao Paulo then caught a luxury bus to Rio.

We arrived just before it got dark and it was raining. Not a great intro to a city known for its sun. We had to get a cab to our hostel in Copacabana and it was so expensive; a harbinger of things to come.

We hadn’t booked the hostel because it was low season and we didn’t want to get locked into a hostel until we saw it. Because it was the weekend we were told that the price for a dorm bed was US$28 instead of the normal US$17!

We were outraged but by this stage it was dark and pouring with rain so we paid for one night then booked the next five nights on Hostelbookers which was cheaper than booking through the hostel itself, pretty stupid.

At least caipirinhas were cheap during happy hour so I indulged in a couple of them before bed.

The next day there was brilliant sunshine. Eating breakfast at the hostel a cute little monkey got in the window and was sitting on the couch watching us. I had thought the squirrel monkeys in Bolivia were small but these little guys are half the size.

After breakfast we headed down to the world famous Copacabana beach to see what all the fuss is about. The beach was really beautiful and we were so excited to be by the sea again after a couple of months without seeing it.

You always hear about how dangerous it is in Rio, especially around Copacabana beach, but I didn’t feel that at all.

We walked almost the entire length of the beach then over to Ipanema and just saw people enjoying the sunshine, there was no one causing any trouble. 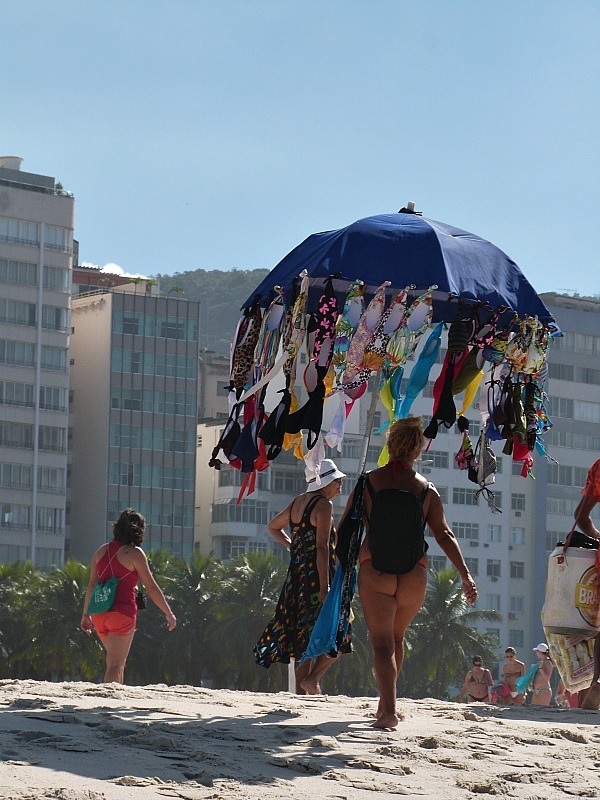 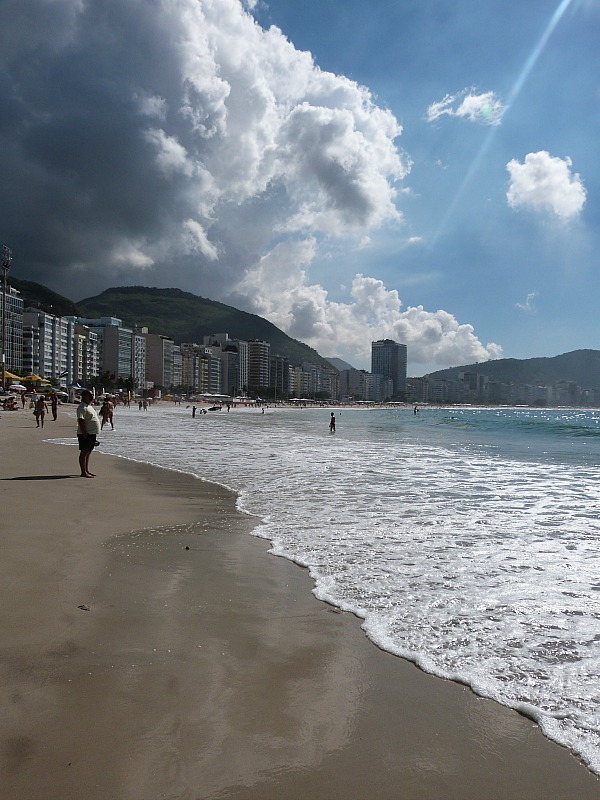 Both of the beaches have great beach front biking/walking paths and lots of little beach bars and restaurants. The beach and footpaths are really clean and with the lush jungled mountains framing everything, it really is stunning. 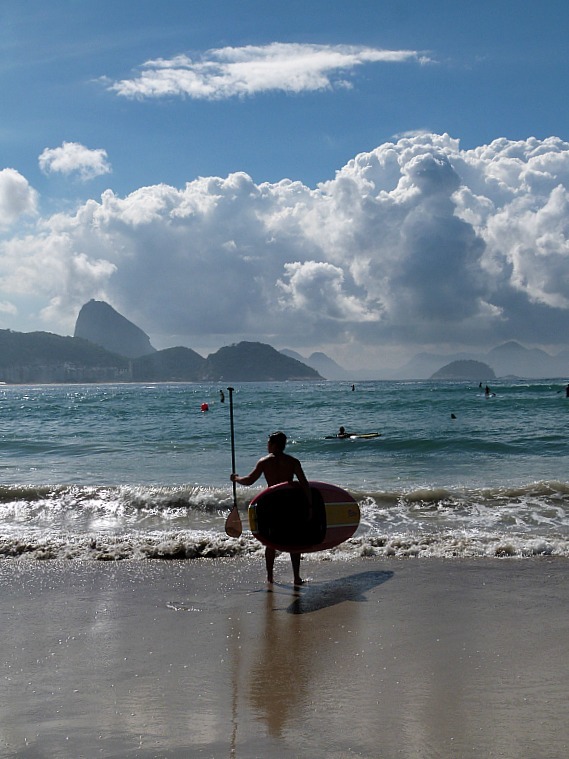 We wandered through the Leblon neighbourhood at the southern end of Ipanema beach for some delicious Portuguese Chicken and bought some new Havianas, the selection is amazing and I got a pair of great retro Donald Duck ones.

Rio has a massive amount of juice bars serving a wide variety of tropical fruits so I got to have my favourite Maracuya juice again. There is also some amazing pastries and cakes and I couldn’t resist trying one that was made with choux pastry, cream, custard and toffee – incredible.

We loved the beaches so much we spent the next day there too but first we bussed up to visit Christ the Redeemer, perched on top of his mountain overlooking the city and beaches. 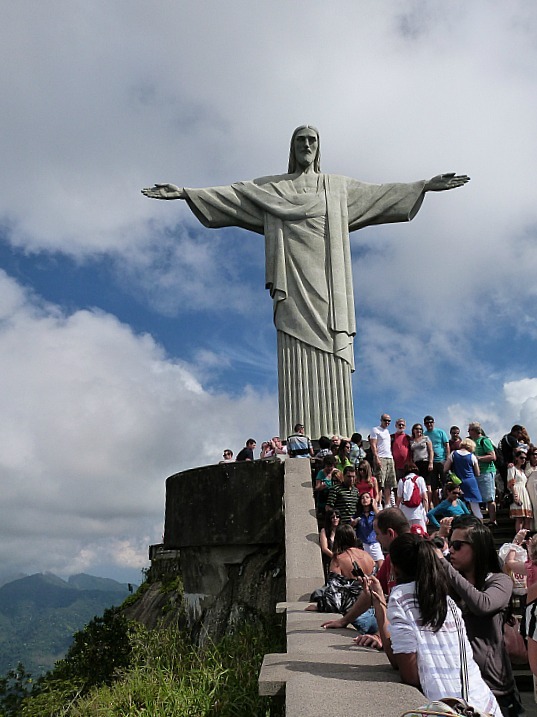 We stopped at a great view point first with spectacular views of the coastline then caught another bus up the rest of the way.

It probably is an overpriced attraction but I really enjoyed seeing it up close, the size is incredible! The view from the top is amazing too. Christ the Redeemer is such a famous Rio attraction, that I am glad that we saw it up close. 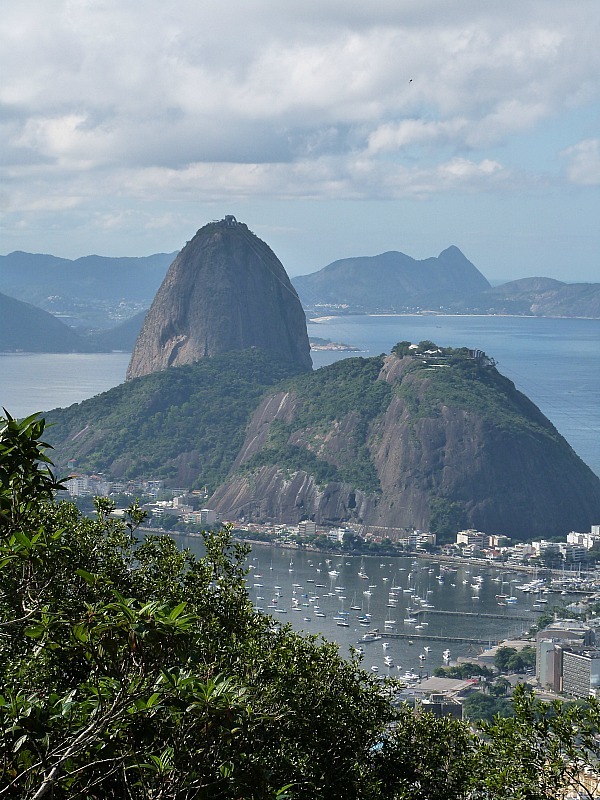 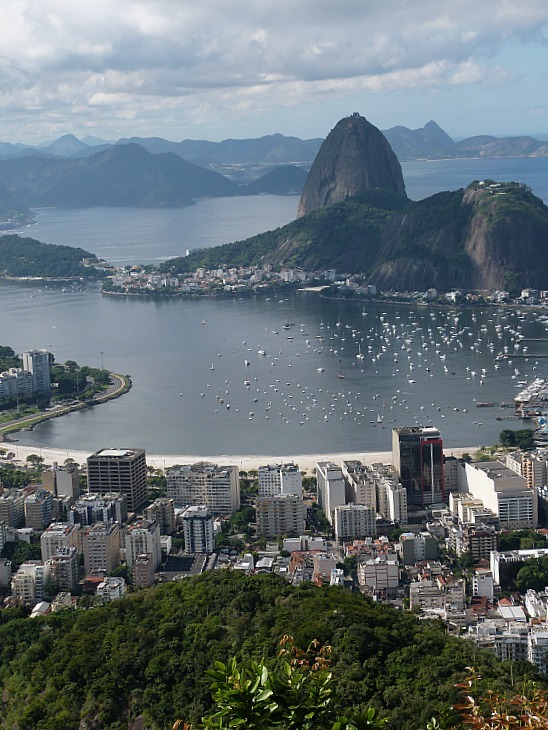 There is a hippy market at Ipanema on Sundays so we went there next and I bought a new bikini top then we sat on the beach the rest of the afternoon.

For me nothing beats a beautiful beach on a hot and sunny day. We rounded off a perfect day with a beer at one of the Copacabana beach bars. 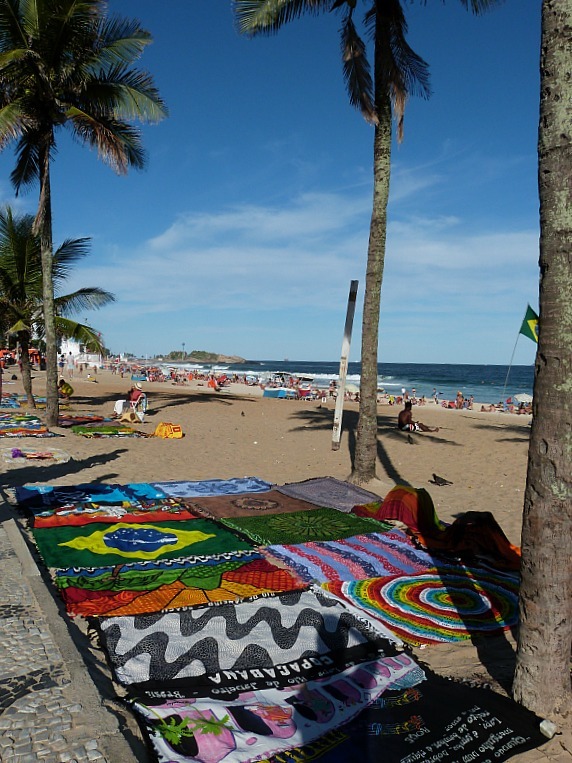 On our third day in paradise we spent the morning swimming at Leme Beach, which is at the far northern end of Copacabana. It is a bit more quiet and chilled there and there were hardly any people around, a big benefit of visiting Rio in low season. 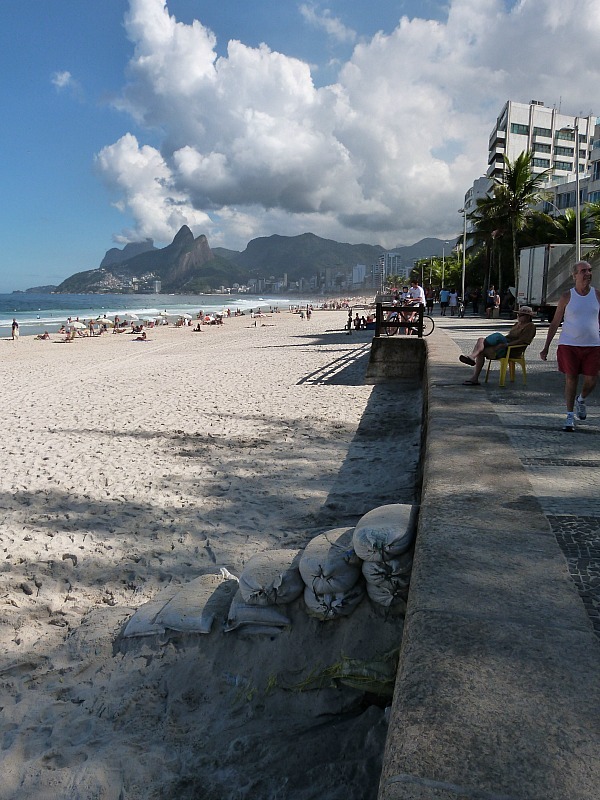 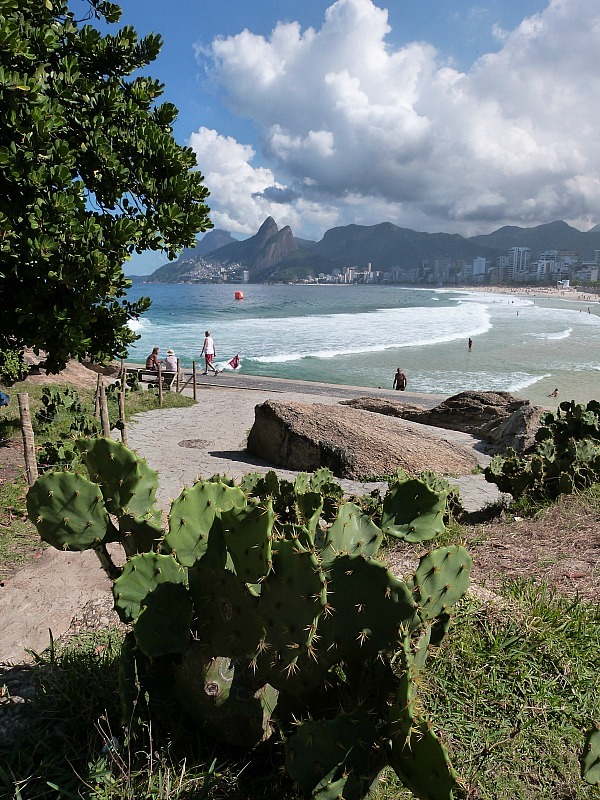 It clouded over in the afternoon so we took the train to Gloria, a central suburb of the city, and enjoyed lunch like the locals do, at a ‘per kilo’ restaurant.

The ‘per kilos’ are great value, you take what you want from a buffet and they weigh it and you pay at the next counter by the amount it weighs. Among other things, I tried some of the catfish which I had heard was really good. I wasn’t disappointed.

We walked up to the Santa Teresa neighbourhood which has great views from its hilltop vantage point along with cobbled streets and beautiful historic buildings. It was pretty much deserted and a nice place for a wander.

We saw loads more of the tiny monkeys that we first encountered at our hostel, running along the power lines. One woman was feeding them a banana from out of her window. 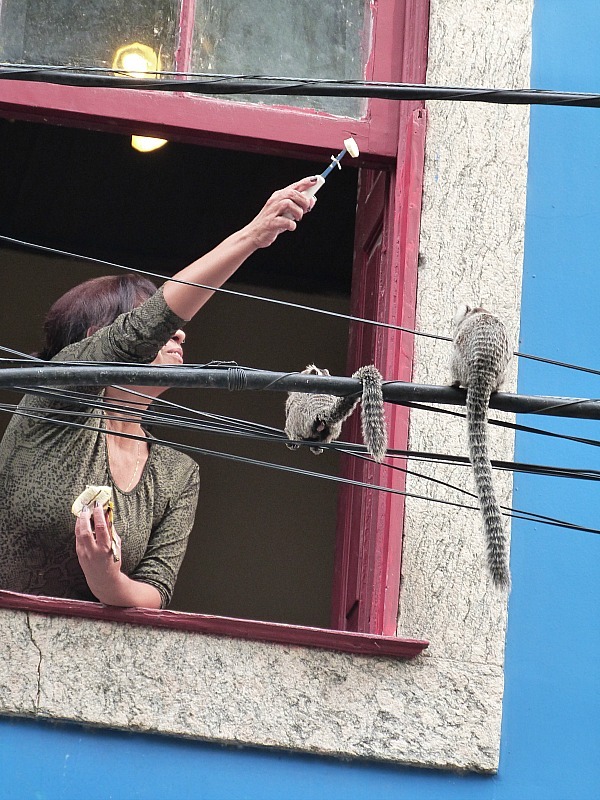 Another famous attraction in Rio is the Escadaria Selarón in Lapa. A Chilean born Artist, Jorge Selarón, has been transforming these stairs for years with brightly coloured tiles mainly in green and yellow to represent the Brazilian flag.

He has done an amazing job and it definitely brightens up an otherwise dull neighbourhood. 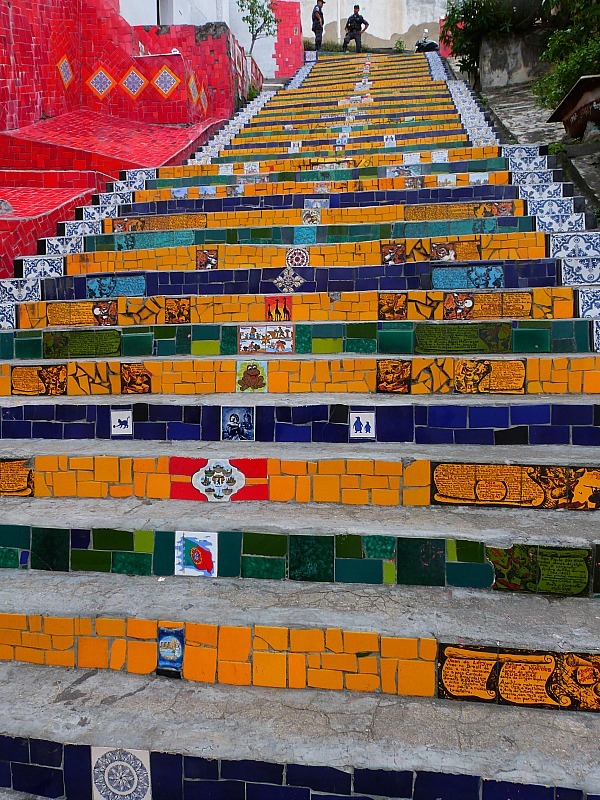 We wandered down to the beach in nearby Flamengo and through Flamengo Park which is full of stray cats that are either looked after by locals or the city as there was lots of food and water left for them all over the park, and there were even cushions for them to sleep on.

There were at least 100 cats in this park and the majority of them looked to be in good health.

They were obviously used to people as they were very friendly too. Herds of cats sauntered up to us for a pat and cuddle and I was happy to oblige them.

I loved this park. Cats are clean animals so they haven’t left any messes anywhere and if I lived in Rio I would come here for some cat time at least once a week. If you can’t have a pet this is the next best thing and I loved Rio even more after I saw the people’s love for the down and out cats of the city.

It was sunny again the next morning so we went back to Leme Beach for another swim and some sunbathing. We watched the body boarders and surfers doing their thing on some massive waves then, when the clouds rolled over, we walked over to Urca to take a closer look at Sugar Loaf Mountain. 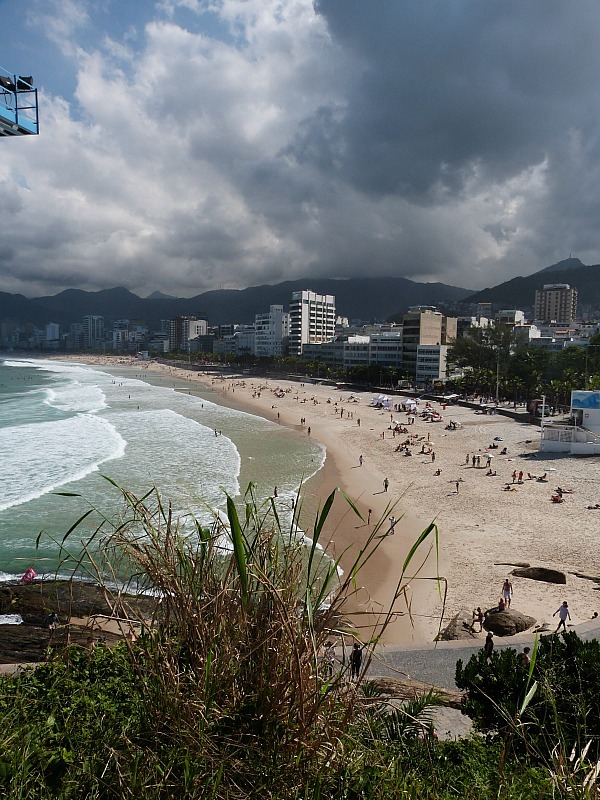 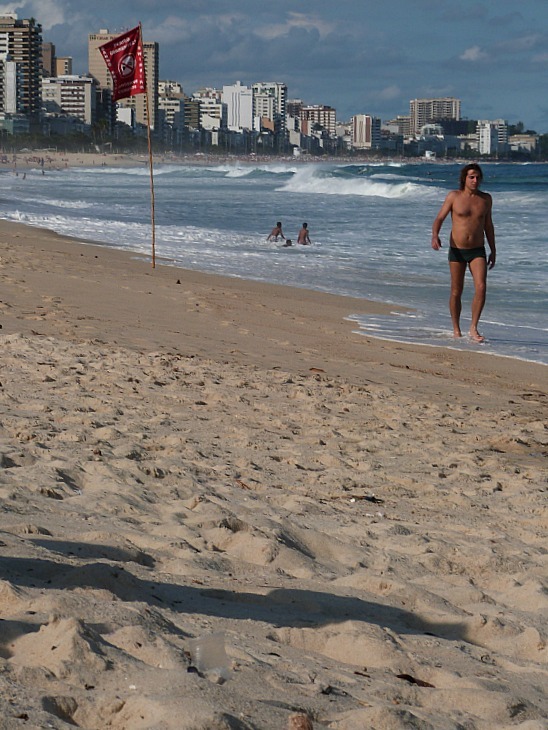 There is a great little beach right beside Sugar Loaf so we sat there for a while eating chocolate filled Churros (another common and delicious treat in Rio) then walked the pathway that goes around the side of the mountain.

We saw some more gorgeous little monkeys including one with two teeny tiny babies on her back. 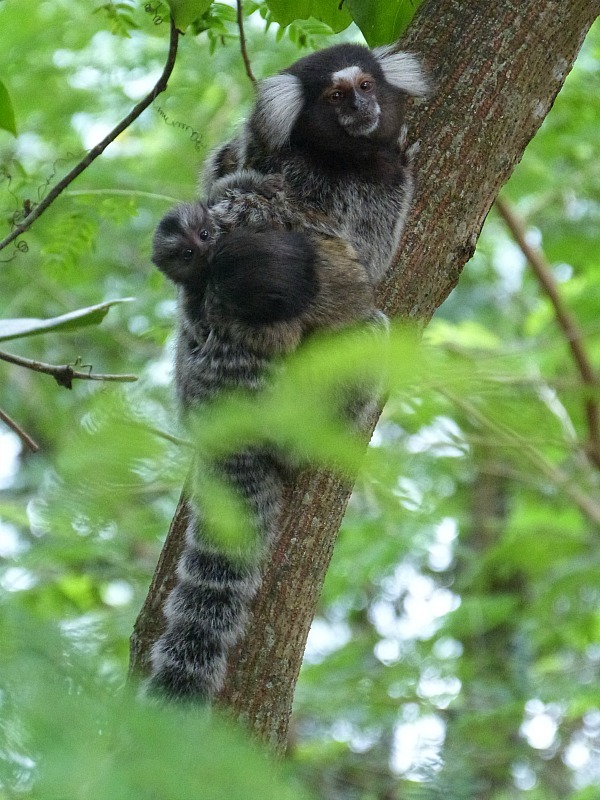 Back at the hostel, we thought that we should probably go out while we are in Rio as the night life is another thing that Rio is famous for. We had a couple of drinks at the hostel then when we tried to get more money out on Trav’s card it wouldn’t work in any of the machines. By that time it was quite late so we gave up and went to bed. Oh well, we tried.

Our last morning we spent walking the sea wall in Urca and sitting on a small beach watching the boats bob in the harbour. After lunch in Botafogo we headed back to the hostel and had a quiet afternoon. 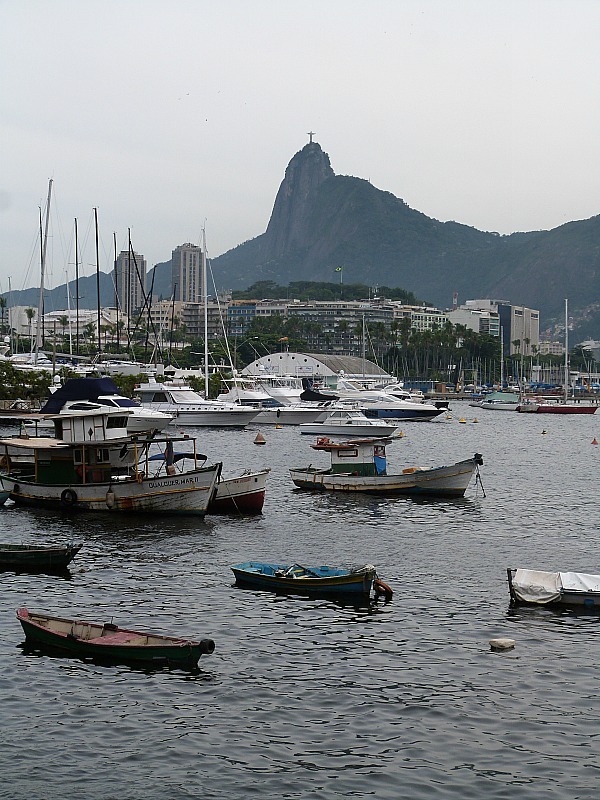 We flew to Toronto via Panama City the next day for a new chapter in our adventure and one I have been looking forward to very much: Canada.

We really loved the tiny corner of Brazil that we saw and will definitely be coming back for a long trip to explore this amazing country. 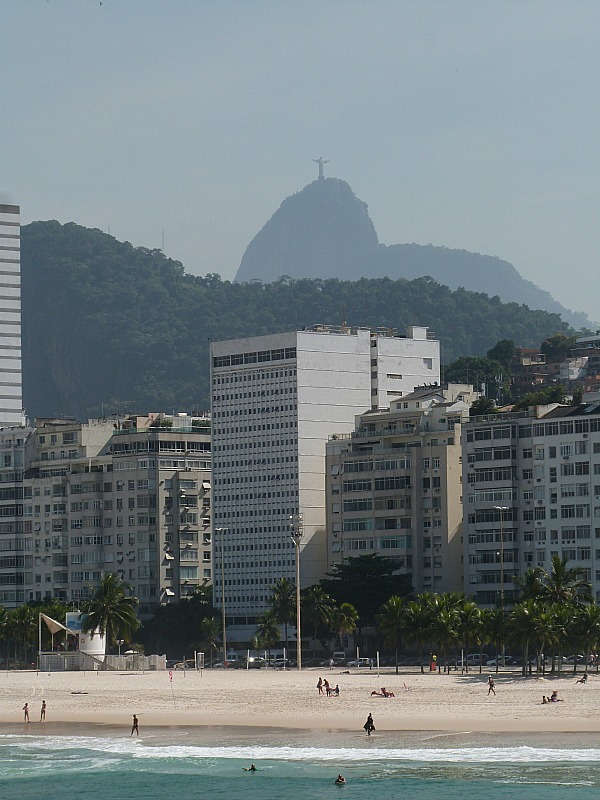 Reflecting back on our four months in South America, we feel very lucky for all of the amazing experiences that we have had and the great people we met along the way.

The good definitely outweighed the bad in the end. That’s all you can really ask for.

2 Comments on A Week in Rio de Janeiro: Machu Picchu by the Sea