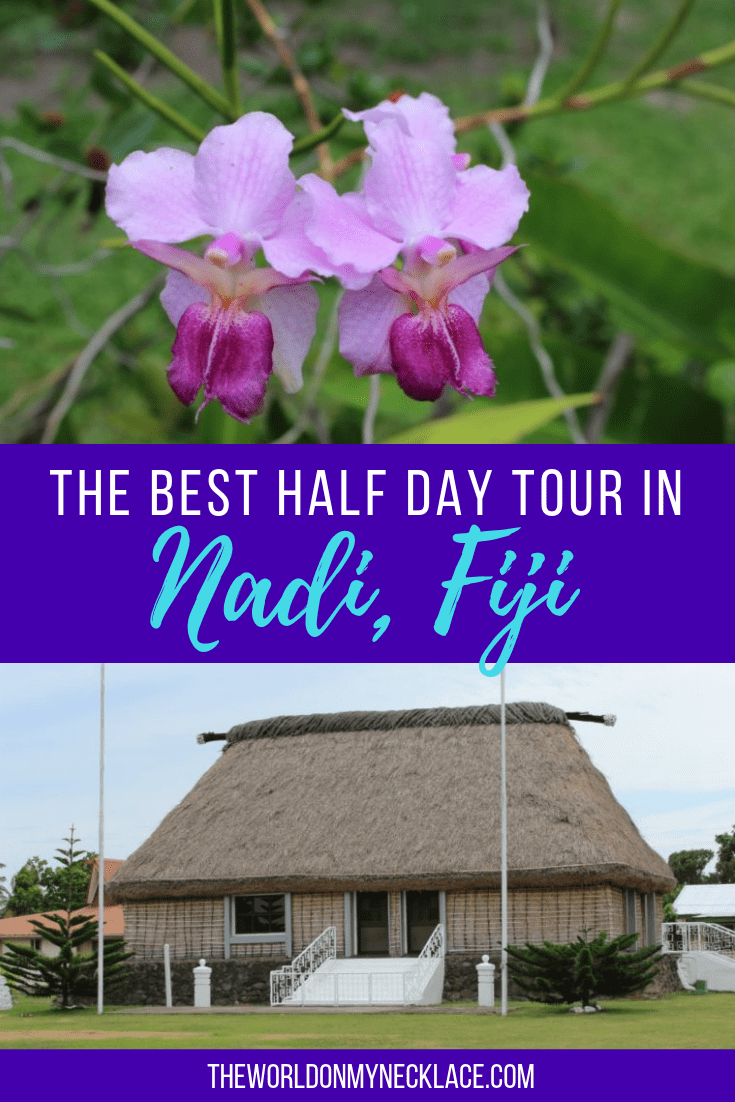 Sometimes it is the experiences that only come about in the last minute, with no expectations, that end up being the most rewarding. Such was the case on our last day in Fiji, where we ended up doing a half day Nadi tour.

Our flight was due out at 2.30pm from Nadi airport and we didn’t have much planned for our last morning in Fiji.

We had spent the night before at Smugglers Cove Backpacker Resort on Wailoaloa beach, after arriving back from the Yasawa Islands via the touristy Port Denarau. Although I won’t deny it’s beauty at sunset. Wailoaloa beach was unimpressive compared to the beauty of the Yasawa’s white sands but I liked the setup at Smugglers, and we enjoyed a lobster dinner and drinks on the moonlit patio overlooking the ocean.

Fire dancers entertained us and a guy proposed to his girlfriend in front of everyone. It was a great last night, despite the feelings of melancholy slowly seeping in when our thoughts turned to our impending return to reality. We woke up on our last morning and decided to get a taxi to the market in Nadi. Originally we thought we would just chill out at Smugglers Cove and swim in the pool but we could do that anywhere, including at the ocean pool five minutes from where we live in Sydney, so we decided to mix it up a bit and do something different.

I wanted to get a bit more culture in before leaving Fiji and I do love me a market. We caught a registered taxi outside the hostel and the driver, Khan, introduced himself to us. He was a chatty guy and when we were about 5 minutes down the road he told us he could do us a deal.

He would drive us around for the four hours before we had to be at the airport for only FJD$100, rather than the usual FJD$60 per hour that the cab company would usually charge hotel guests.

Considering it would have cost us about FJD$15 each way to the market then another FJD$30 – $40 to get to the airport later, it sounded like a reasonable amount to us for a personal chauffeur so we decided to go for it. There are a number of things to do in Nadi and this half day tour would take us to the best.

We drove back to the hostel and picked up our bags and then we were on our way.

Embarking on a Half Day Nadi Tour

On the way into Nadi, Khan told us about the new Government that had just been voted in and how change was coming to Fiji, in a good way.

I hope these changes come to fruition and that the promises that were made are kept. My fingers are crossed for Fiji.

Khan also told us about his family. None of his children live in Fiji anymore; it is just him and his wife. He has a son living in Auckland, New Zealand and two more sons living in Australia.

I asked him if he visits them and he told me that he can’t afford to do so, but that they come back to Fiji when they can.

Our first stop on our private tour was at the Sri Siva Subramaniya Temple in Nadi, the largest Hindu temple in the Southern Hemisphere.

The temple complex was an elaborate display of bright colours and intricate carvings made up of one large building and smaller shrines surrounding it. According to the Lonely Planet, it is one of the few places outside India where you can see traditional Dravidian architecture. More than a third of the population of Fiji is made up of Indo-Fijians hence the importance of this magnificent temple complex. It was particularly stunning against a backdrop of a bright blue sky. Nadi city centre was different than I expected. It was actually quite small with just one main street and a few smaller streets branching off it. Despite its size, it was chaotic and there were people everywhere.

We parked in a small car park and walked the short block and a half to the Nadi Produce Market. Some touters tried to get us into one of the souvenir shops and Khan yelled at them. Apparently it is illegal to tout in Nadi and he had reported people before. For a small man, Khan was feisty.

We entered the market hall where Kava was being sold in root and powder form, along with the half coconut cups to drink it out of and the wooden mixing bowls.

Kava is a mildly sedative drink that is drunk in social settings in Fiji. I knew it was popular but I had never expected to see a whole market dedicated to it. There was also a small kava bar where you could pull up a stool and drink it. Next door was the produce market which was bustling. Khan took us around and pointed out the different produce at each stall. There was cassava, taro, papayas, mango, coconuts, bananas, fresh eggs – big piles of island produce for sale and it was so cheap. We bought swirls of pineapple on a stick that was sweet and sticky.

The stall keepers were friendly and smiled their beautiful Fijian smiles at us. A lot of them travel a long way to sell at the market and would sleep overnight on the cold concrete, sometimes for days, until all of their produce is sold. A hostel has just been built with beds, toilets and showers so now they can stay in comfort at no charge.

There was a small tiled room off to the side of the market where a fisherman was selling the dozen tuna and trevally that he had caught the night before. Khan said that he would have been out fishing all night before coming straight to the market to sell the fish. He wouldn’t leave until they were sold.

After leaving the market, we drove to Jack’s of Fiji, a multi storey air conditioned souvenir shop. We bought a small souvenir drum, Trav got a couple of stubby holders and I bought a beautiful batik printed sarong, which was exactly what I had been looking for.

Heading back out into the countryside surrounding the city core, Khan told us more about his life in Fiji. He said that his boss is a fair man but that it has been a struggle to earn a decent living.

As well as being a taxi driver, he also works in sugar cane fields that his family owns in his spare time. Khan must have been in his fifties or sixties so I imagine that it would be back breaking work, especially at his age.

Next up was a visit to the traditional Viseisei village, said to be one of the oldest in Fiji. I was excited to visit another traditional Fijian Village after loving our first experience visiting a village in the Yasawa Islands.

On arrival we were invited to peruse the handicrafts laid out by the local women of the village, which included shell necklaces and batik cloth, then our guide then took us on a short tour. There weren’t many people around the small village, just a small team of men that were setting up a tent for a funeral. Our Guide said that it can take a week or more to set up for a funeral but the funeral itself is only for one day.

The Chief’s house was impressive in size with a neat straw roof and was much larger than the simple houses of the villagers that were scattered through the neat grounds.

Our tour ended with our guide singing a few hymns in the village church to show us the amazing acoustics of the building. He had an incredible voice and it echoed around the sacred space. The last stop of our whirlwind tour was to the place I was looking forward to seeing the most: The Garden of the Sleeping Giant.

Set against the side of a mountain range that looks like a man sleeping on his back, this tropical garden is known for its wide array of orchids, one of my favourite flowers. On entering, we walked down a covered walkway that was lined with different varieties of colourful orchids. Some were quite unusual and they varied greatly in size. Exiting the walkway we came upon a stunning lily pond surrounded by lush green plants and giant trees. A trail looped up into the rainforest on the mountainside and large vines hung down around us. It was a tropical paradise of peaceful green. We finished our outing with a complimentary tropical fruit juice, sitting on a veranda in big wicker chairs overlooking an expansive lawn.

I saw a mongoose while I was sitting there and sipping which was the first one I have seen since I was last in Hawaii a few years ago. What a magical place. I wish we had the time to stay longer. Khan dropped us at the airport with plenty of time and we gave him an extra FJD$50 as a tip. It was great to see some of the sites around Nadi and get a taste for the main island culture which is quite different than the Yasawas.

Khan is a character, that’s for sure. I feel lucky that it was his taxi that we got into.

Have you ever hired a private driver to see more of a place? Have you spent any time around Nadi?

If you are heading to Nadi and want a good rate on a half day or day tour of Nadi, send me a message and I will give you Khan’s number.

23 Comments on An Impromptu Half Day Nadi Tour