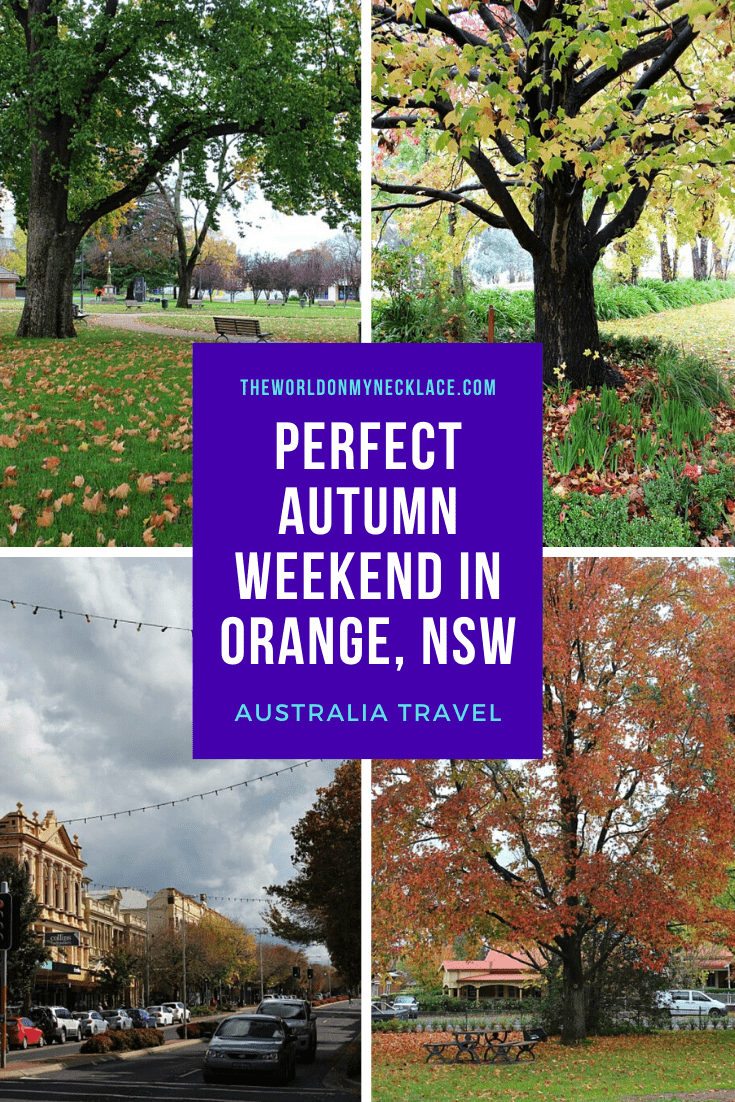 Looking for a colorful autumn getaway near Sydney? Then you can’t go past spending an autumn weekend in Orange NSW. Read on to find out more.

As well as being a color and a fruit, Orange NSW is also a small country town located in the central tablelands region, a couple hours drive from Sydney, Australia.

Known for its fantastic local food scene and autumn colors, Orange NSW was the perfect choice of location for a weekend away from Sydney in late April.

Embarking on our Weekend in Orange NSW

Finishing work early, we hit the road on a bright and sunny afternoon for the four-hour drive inland. As usual Sydney traffic was pretty horrendous and we had only made it as far as the Blue Mountains when the sunset, leaving us to drive the rest of the way to Orange in the dark.

Our first evening in Orange was spent eating Indian takeaway in our motel room, exhausted after a day at work and then the long drive.

Saturday was a special day with a very early start. It was the 25th April, or ANZAC Day, a day to remember the sacrifice of Australian and New Zealand Army Corps soldiers that fought and gave their lives for their countries in times of war.

On April 25th 1915, ANZAC soldiers stepped foot on the Gallipoli Peninsula in Turkey, the first day of what became a bloody eight month battle against the Ottoman Turks who were protecting their homeland.

The aim of the Gallipoli campaign was for the allied forces to gain control of the Dardanelles and Bosporus straits, capturing Constantinople, and opening a Black Sea supply route to Russia.

It ended up being a slaughter.

Landing at what is now known as ANZAC Cove at dawn, one mile from the planned drop off spot, the ANZAC soldiers were faced with  almost impenetrable cliffs blocking any advance, and nowhere to take cover.

There was a massive loss of life on both sides, and although the numbers pale in comparison to some of the battles that took place in France and Belguim during World War One, the Gallipoli campaign is a significant battle in the history of Australia and New Zealand as it is considered as marking the birth of Australian and New Zealand national identity.

My Great Great Uncle Arthur Verner was an ANZAC soldier and he died on the beach at ANZAC Cove. He was 31 years old and never had a family of his own.

His rosary beads that were on him when he died were sent back to his mother and then passed down my family line to my Grandmother. When my Grandmother passed away last year they were given to me.

I had never been to a dawn service before and I was determined to finally make it this year, on the 100 year anniversary. Luckily for us, the dawn service was being held in the park across from our motel in Orange.

My alarm went off in the early pre-dawn hours of Saturday morning. We layered up and braved the freezing temperatures to join the silent crowds gathered around the war memorial in Robertson Park.

I had my Great Uncle’s rosary beads in my pocket and my Grandad’s notebook of songs he wrote while stationed in Fiji during World War Two. Two of my prize possessions. I hate war but I respect the sacrifices they made to protect their country.

There was a feeling of expectation in the air. We heard a band in the distance with the music becoming louder as they approached us. The dawn service for ANZAC Day had begun.

Speeches, poems and bugle calls followed by the Australian then New Zealand national anthems put chills up my spine and tears in my eyes. It was very moving and I felt a very strong sense of national pride. 100 years ago our young nations really came into their own.

We had started to develop our own sense of identity separate to our British rulers. 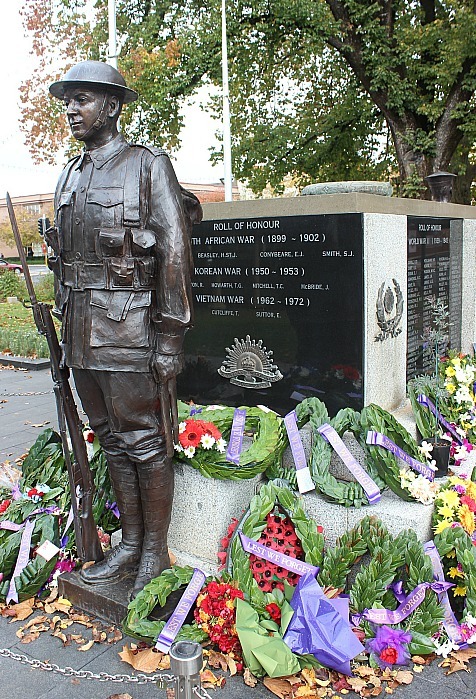 The service was over within 15 minutes but it stayed with me throughout the day. The Orange Country Women’s Association put on a complimentary breakfast at their small headquarters at the edge of the park.

We ate porridge with stewed apples and fruit toast on tables covered in lace tablecloths and decorated with vases of rosemary, a symbol of ANZAC Day in Australia.

I didn’t take any pictures out of respect but I will never forget my first dawn service. I can’t believe it took me 32 years to finally attend.

The day was still young by the time we left the breakfast. After showering back at the Motel room we walked along the main street of Orange, looking for a cafe that was open.

Orange, NSW is an attractive town with tidy historic buildings lining the main street and strings of lights with colorful bulbs crisscrossing over the road. A few trees were shedding their golden leaves. 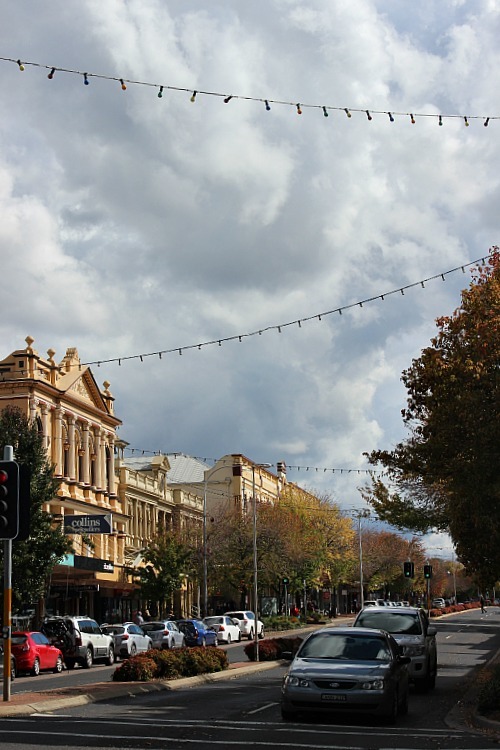 Leaving the town centre, we drove the gorgeous Pinnacle Drive through the countryside surrounding Orange. Glorious autumn color abounded as we drove to the top of Mount Canobolas, a dormant volcano and the highest mountain in the central tablelands region of NSW.

The view from the top was largely unimpressive due to the cluster of transmission towers dominated the summit. The wind was cold and relentless so we quickly set off on a 6km return hike to Federal Falls. 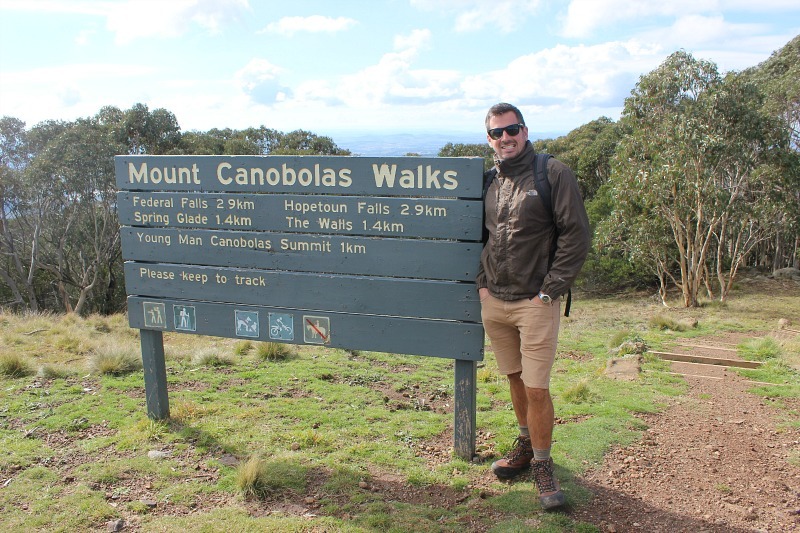 The hike took us primarily through Eucalyptus forest. With the washed out colours of yellow grass and pale green leaves, I found it all a bit bland. We reached the Falls and found them to be little more than a sprinkle. Despite the disappointing scenery it was still good to be outside stretching our legs. 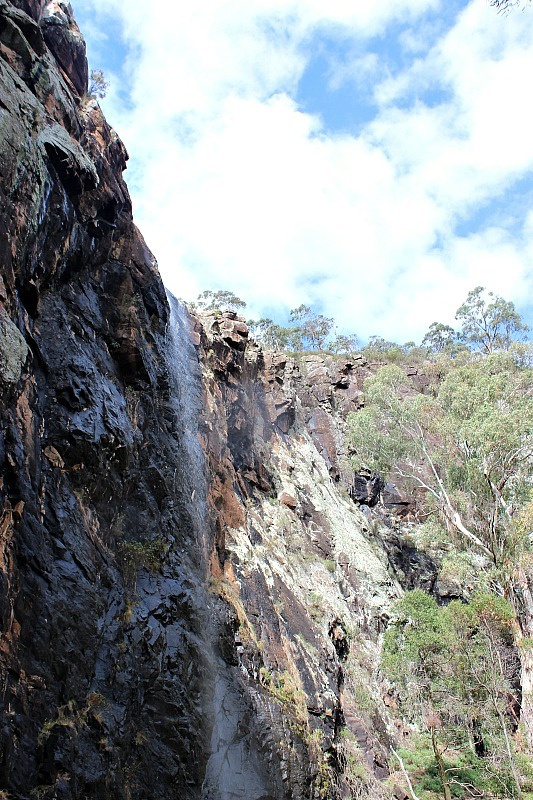 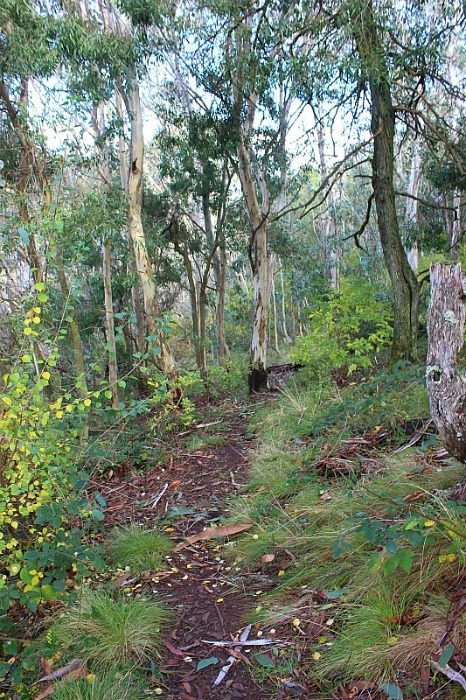 We were absolutely shattered by the end of the hike as the last 2km was uphill. I wasn’t sure if I was going to make it and had to take frequent breaks. We are generally pretty fit, especially for hiking, but I think it was the super early morning that did us in. 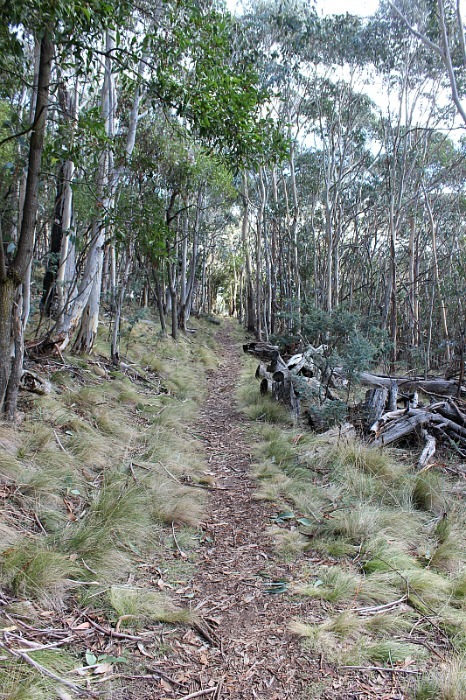 Heading back into town we grabbed lunch at the Hotel Canobolas near our motel. It was packed full of people celebrating ANZAC Day with a lot of midday drinking. It was a bit too loud for our worn out states. The food wasn’t anything special and we left as soon as we had finished eating.

We were surprised to see that it was hailing outside.

The afternoon was spent cosied up in bed with the heater on, alternately napping and watching movies while the heavy rain and hail raged outside our window.

In the evening the rain had finally given way to a steady drizzle so we dragged ourselves out of bed to go and find something for dinner.

I had heard so much about the food scene in Orange and although we couldn’t afford to eat at the best restaurants, it would be a shame to not experience at least one beautiful meal during our short time there.

I couldn’t find much information online for where we should go and knowing that a lot of places wouldn’t be open anyway, we just strolled the streets looking for a restaurant that looked nice but not too pricey. We found it in Percy’s Bar and Kitchen.

A funky pub and restaurant, Percy’s Bar and Kitchen had a cosy but classy atmosphere and a great menu. We weren’t that hungry so we got a couple of dishes off the starter menu with Trav having the pork cheek with colcannon and a cider glaze while I went with the soft shell crab tacos. Both dishes were divine.

Sunday dawned grey but dry. It was time for some leaf peeping, starting with Robertson Park where we had been for the ANZAC Day Dawn Service the day before. 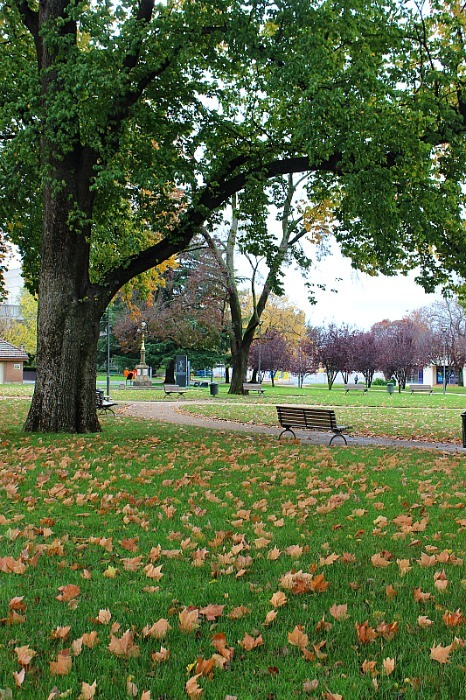 With it’s symmetrical pathways, wooden park benches and band rotunda, Robertson Park reminded me of a town square in New England. Trees with leaves of purples, browns, greens and yellows graced the park but not my favorite of the fall color spectrum unfortunately: red. 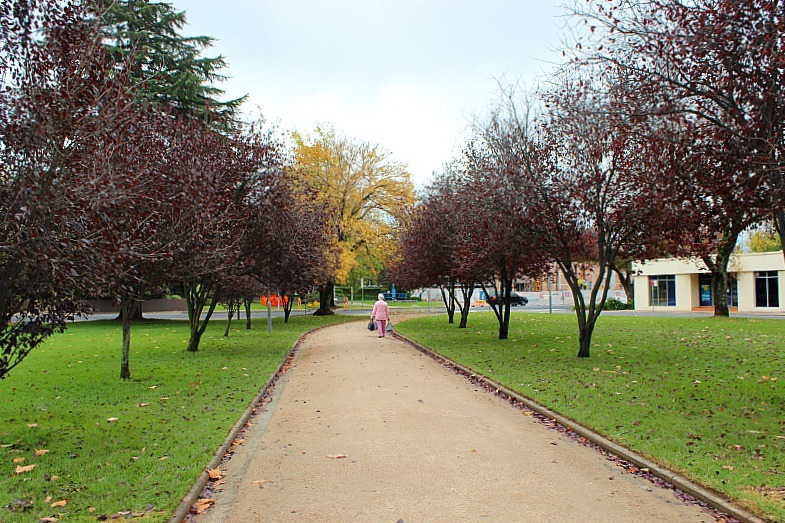 The Botanical Gardens were disappointing with not much fall foliage there at all. It was very cold and the clouds were dark and threatening rain. 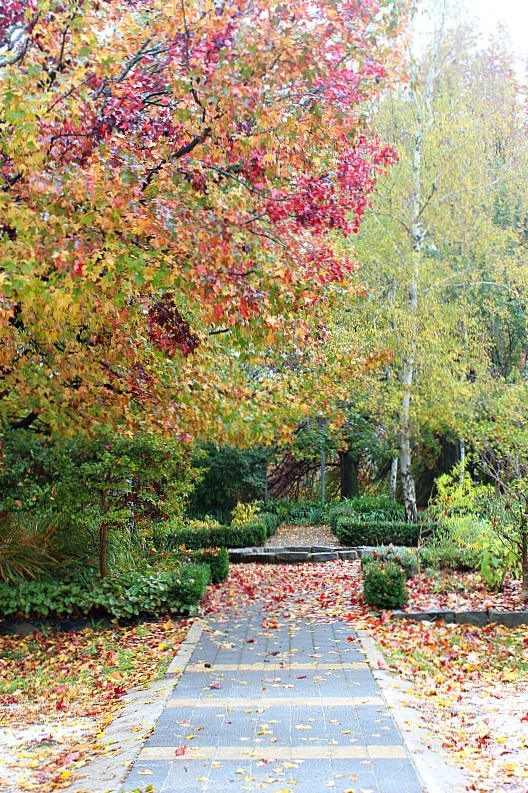 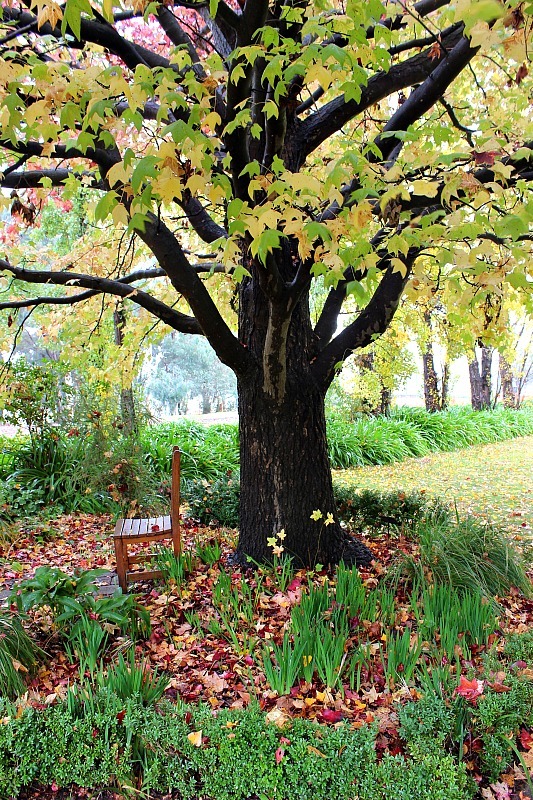 Cook Park was out last stop on the quest for autumn. This Victorian park had many beautiful old trees, a duck pond, and an aviary with various native birds, but not a lot of fall foliage. 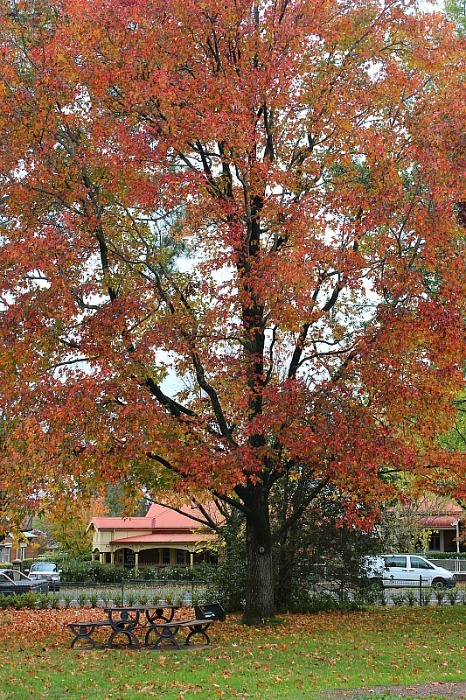 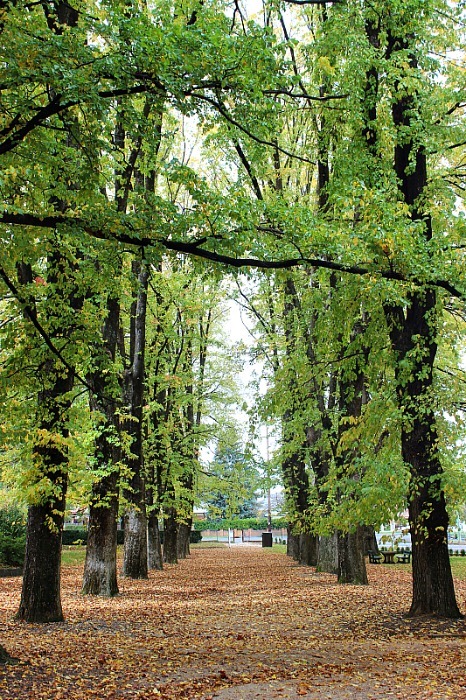 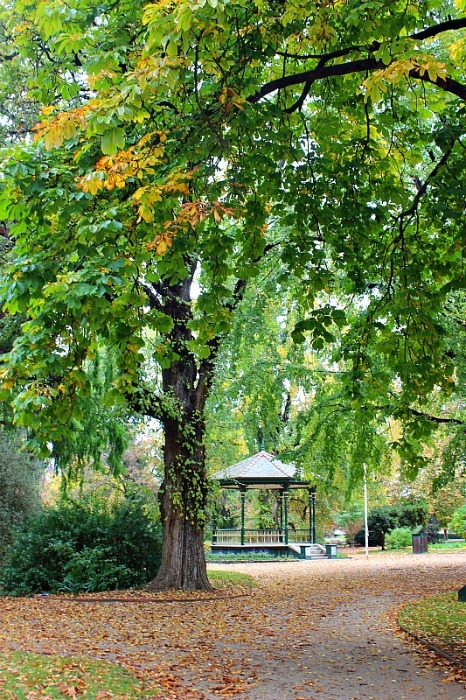 Feeling disappointed in the lack of color and the abysmal weather, we left Orange NSW in the late morning to begin the long drive back home.

A pull-out off the main road caught my eye as we drove out of town. I saw a sign for Chinamans Bend Cemetery. Parking up I followed the short pathway to an open paddock just beyond the rest stop.

There were a couple of historic gravestones standing alone, but there were many more unmarked graves in this field, the headstones long since lost. The people buried here were some of the early settlers of the area. 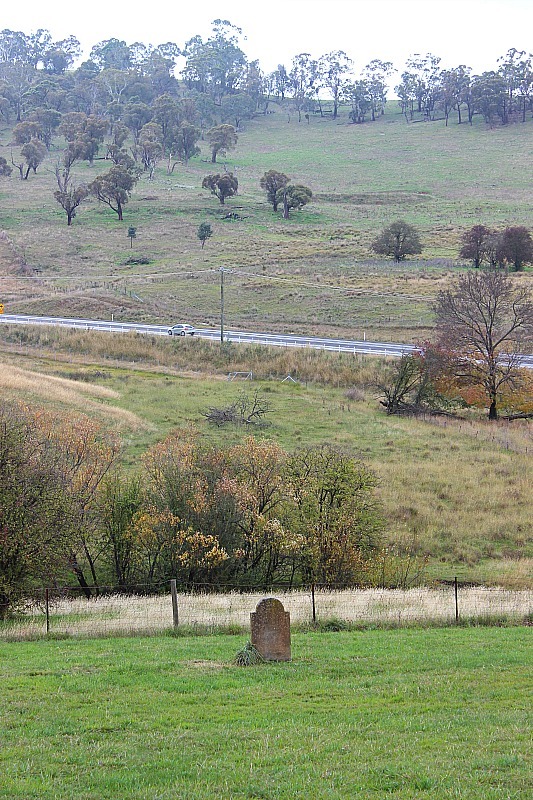 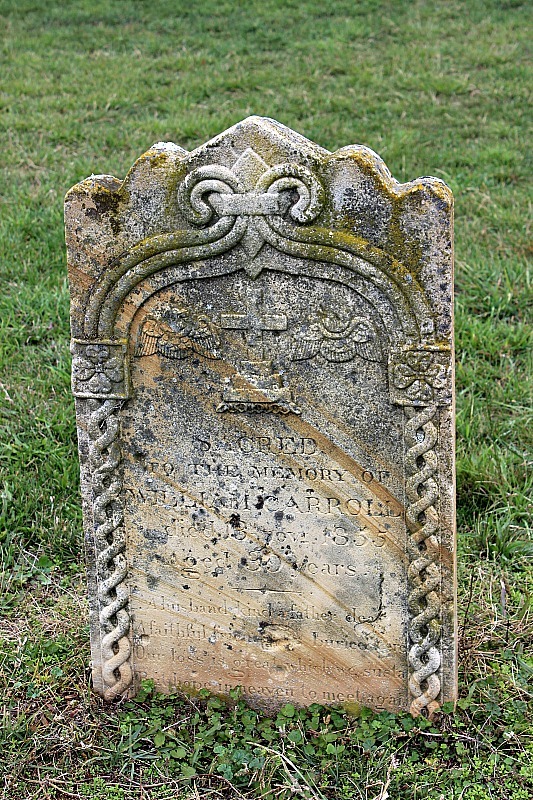 As the bad weather set in we decided to stop in the small country town of Millthorpe, a small detour off the main road. Attractive historic buildings along the main street housed a couple of nice cafes and boutique shops.

The fog surrounding Millthorpe gave it an eerie quality as though it was stuck in time. There wasn’t much to the town and after a quick bite to eat we were on our way again. 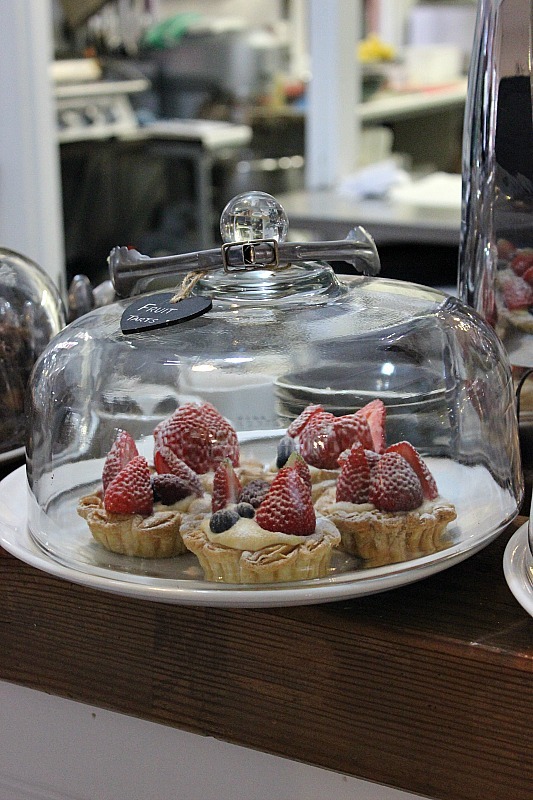 Now even a month after our visit I still have mixed feelings about Orange. The main reason I wanted to visit was for the autumn colors which were unfortunately not in full swing when we were there. I found the hiking on Mount Canobolas boring and the view from the top was unimpressive.

Ultimately I don’t feel that the long drive out to Orange was worth it for me which is a shame.

But there was something very peaceful and calming about this tidy and attractive town. I loved the food at Percy’s and having the opportunity to experience my first Dawn Service in this small and friendly community was quite special.

If I was passing through that way again I would be sure to visit the nearby wineries and to further investigate the best places to eat.

I have a feeling that Orange deserves a second chance.

6 Comments on A Perfect Autumn Weekend in Orange NSW