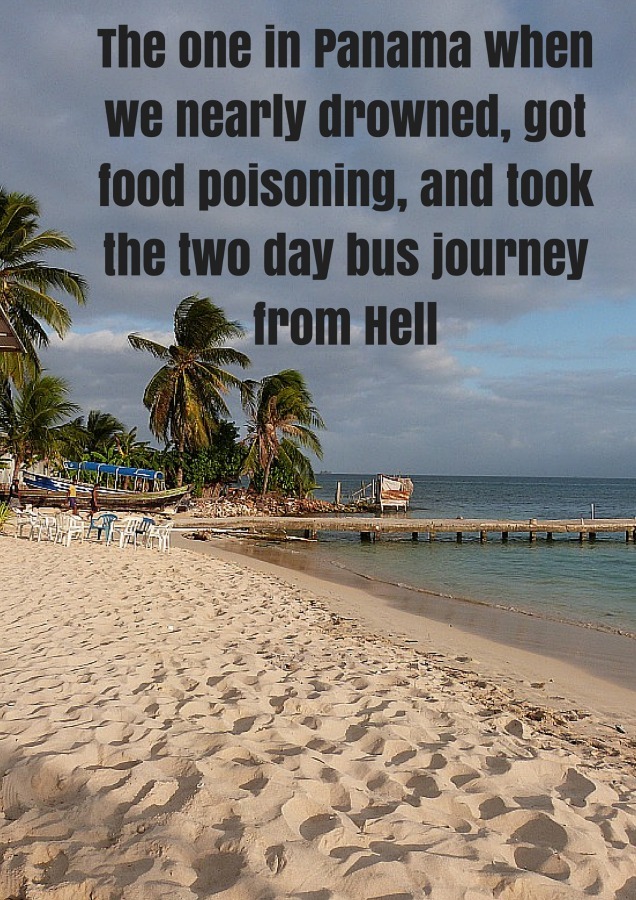 So I left off last time with a brief mention of our epic journey from Managua to Panama City. We had decided that, as we are on a tight budget, we would take a bus across three countries in two days as it was a quarter of the price of a flight; turns out it wasn’t our best idea.

Don’t worry we didn’t get robbed again (yet) unless you count getting robbed of sleep.

It all began with our first bus from Managua to San Jose,Costa Rica at 7am. This bus trip was pretty uneventful and we got to San Jose at 5pm.

We had 6 hours between buses where we fitted in a visit to Pizza Hut and the supermarket and chatted to a fellow traveller in the Tica Bus café.

Exhausted by the time our bus left at 11pm, we were looking forward to catching some sleep on the bus, but alas it wasn’t to be.

First of all they had seated me and Trav apart so I had no one to lie on to make sleeping easier (boyfriends are great for this), just an annoying girl who kept shoving her feet in my personal space.

The bus driver made everyone get off the bus to wait for two hours in a line, sleeping on the dirty concrete, until the border opened at 6.00am.

I was surprised how extensive the border formalities were, it took over an hour to get through and they hand searched all of our bags. Finally on our way again, we then had to brave another 9 hours until we arrived in Panama City. So painful!

We spent four nights in Luna’s Castle Hostel, a legendary place in the beautiful and crumbling Casco Viejo district of the city, full of pastel coloured churches and sea views. 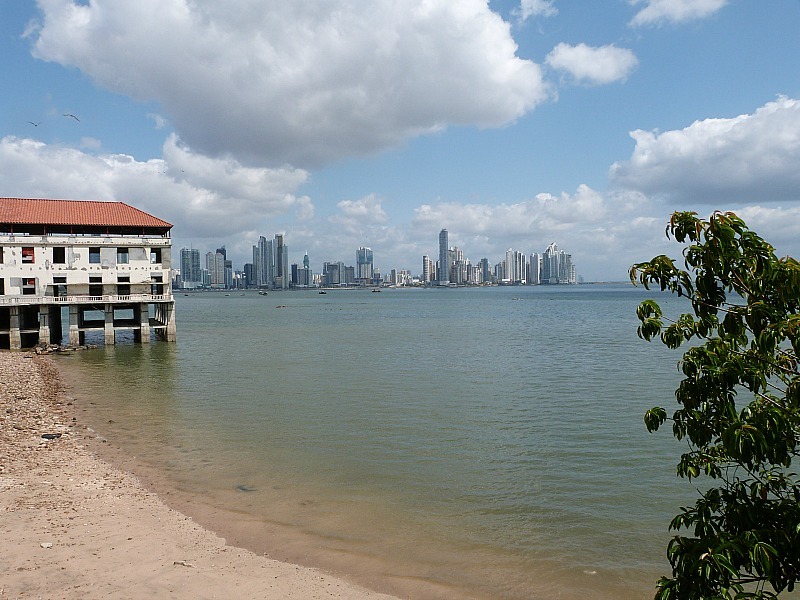 We explored the neighbourhood, visited the Panama Canal to wave at people passing through on a cruise ship (it’s all the rage, everyone was doing it) and walked along the waterfront to the Miami-esque skyscrapers in the new part of town. 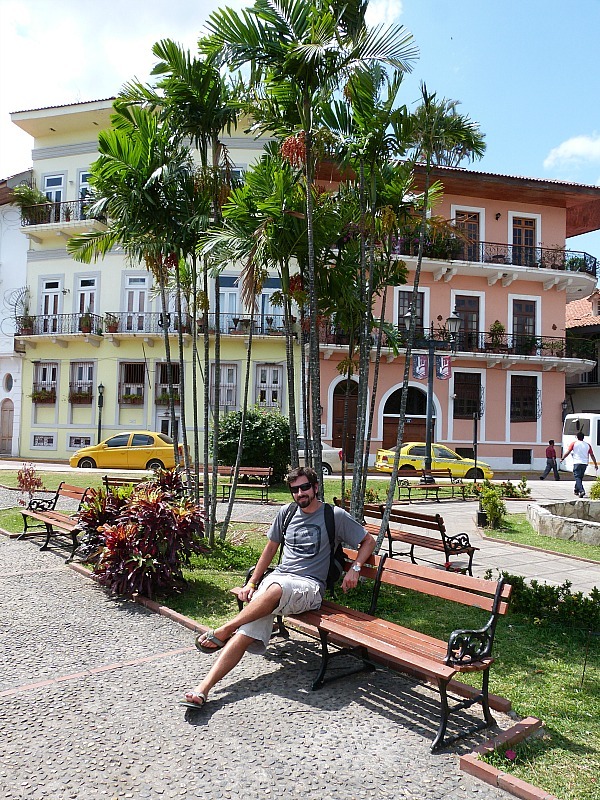 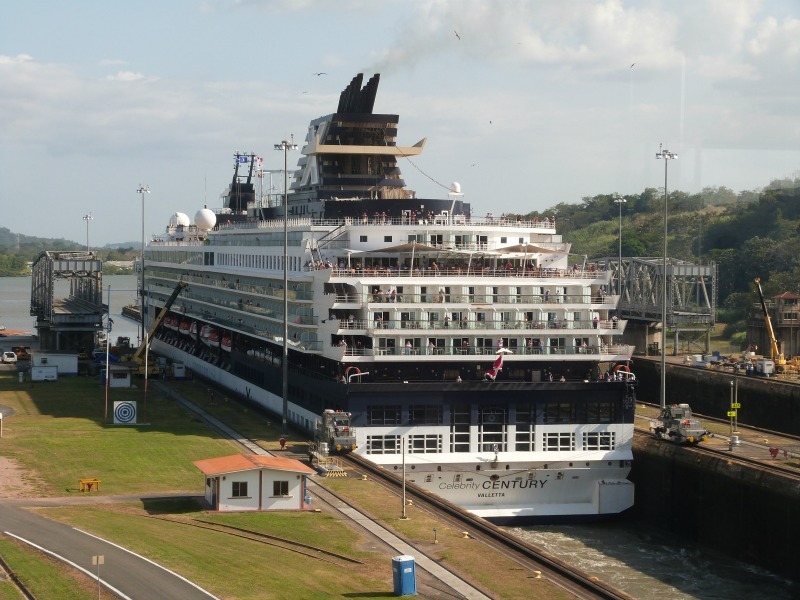 Unfortunately I got a bad cold (the damn bus trip strikes again via its ridiculously cold air con), so my last day in the city was spent with a trip to the supermarket for supplies for our boat trip to Colombia, and then the rest of the day sick in bed. 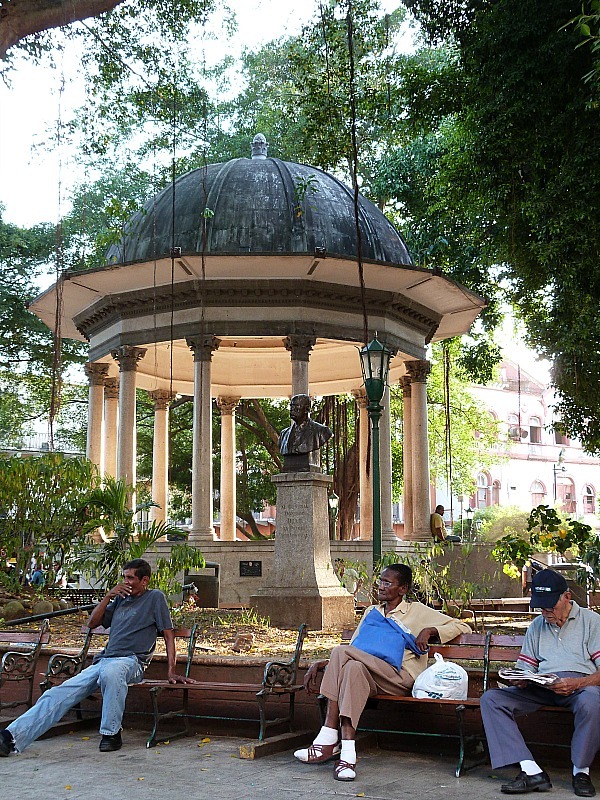 Our next hectic journey began with a very early start. We got picked up at 5.30am by van to drive 3 bumpy hours to Carti, the gateway to the Guna Yala or San Blas Islands. 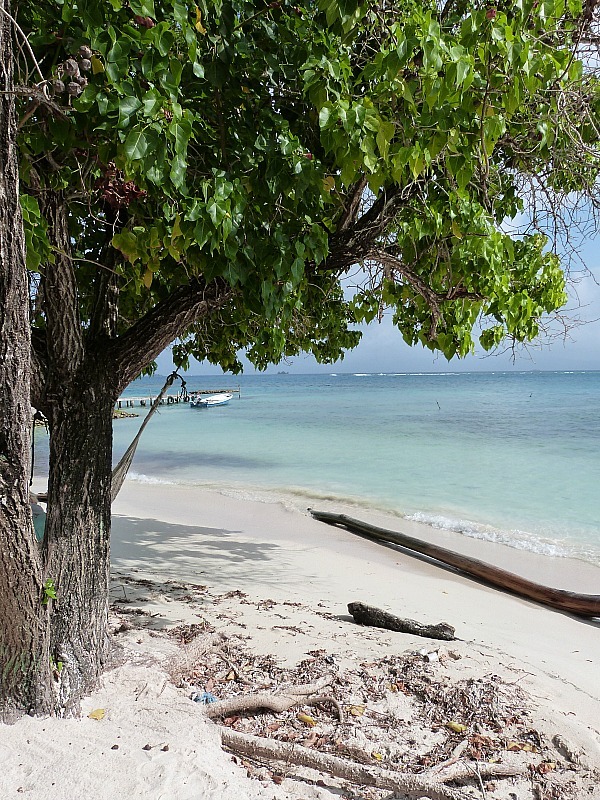 Everyone got acquainted on the van and once we got to Carti we met our Captain, Marco, and the Leader of our trip with San Blas Adventures, Adam.

The first couple of days were great, we stopped at some beautiful islands for a swim (one tiny island was just a couple of palm trees, a white sand beach and turquoise water), snorkelled with colourful fish and coral, had dinner with a Kuna family, toasted marshmallows over an open fire and camped out on a deserted island. 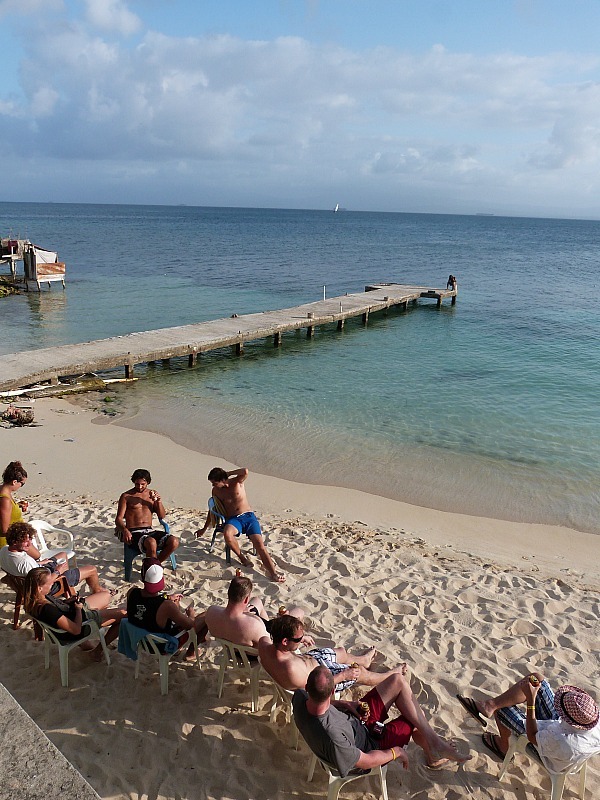 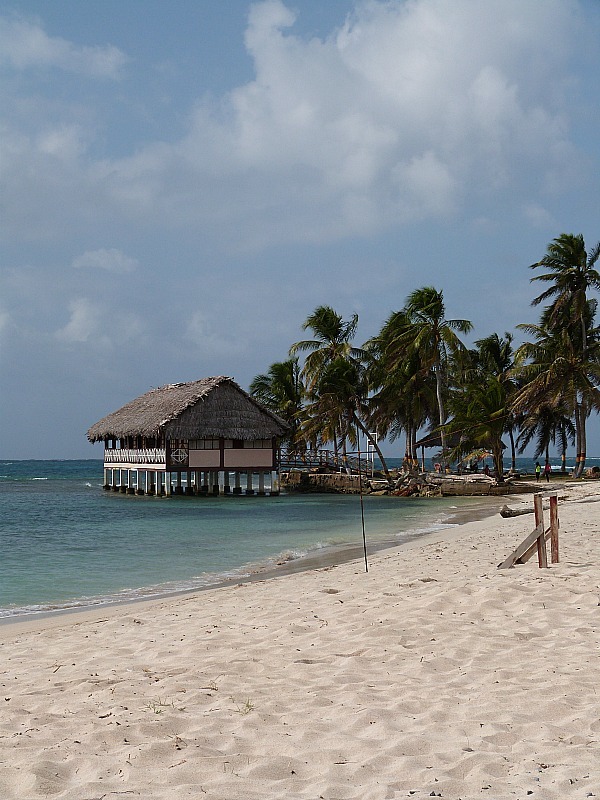 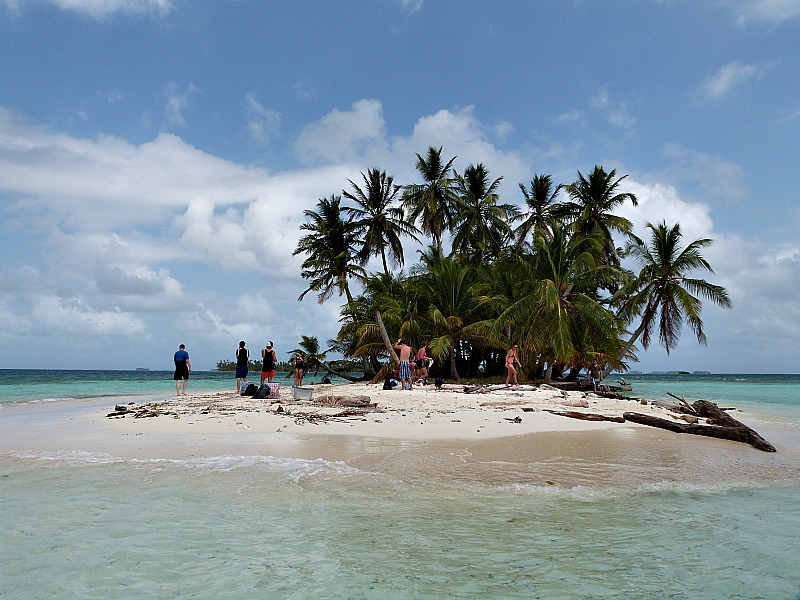 The Kuna have the most colourful traditional dress that I have seen on my travels with bright flowers and colourful head scarves, arm and leg wrappings.

About half of the Kuna women wear the traditional dress and the other half wear more westernised outfits like tank tops and mini skirts.

Another thing that we noticed was all of the rubbish on the beaches and in the water where the Kuna live. I know I can’t judge them by that as they have no proper means for rubbish disposal, it’s just a shame.

There were also long drop toilets out on small jetties where the waste dropped directly into the sea, sometimes only metres from where people would be swimming. Not ideal. 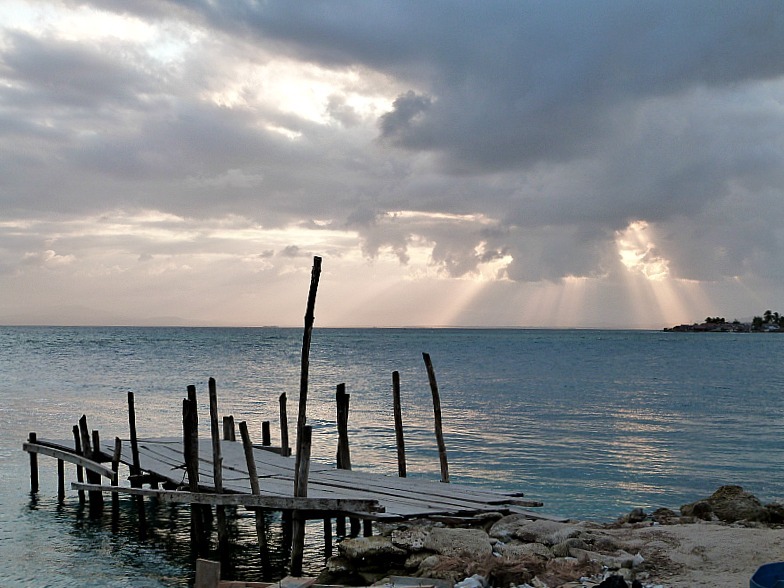 We were warned before we booked that it is the windy season so sometimes travel plans can change at the last minute due to bad weather, so we were expecting the sea to be rough when we weren’t sheltered by the islands.

Despite this warning, I did get quite scared as our boat was only a small motorised lancha, and it was quite rough the first couple of days, but it was also kinda fun ploughing through the waves. 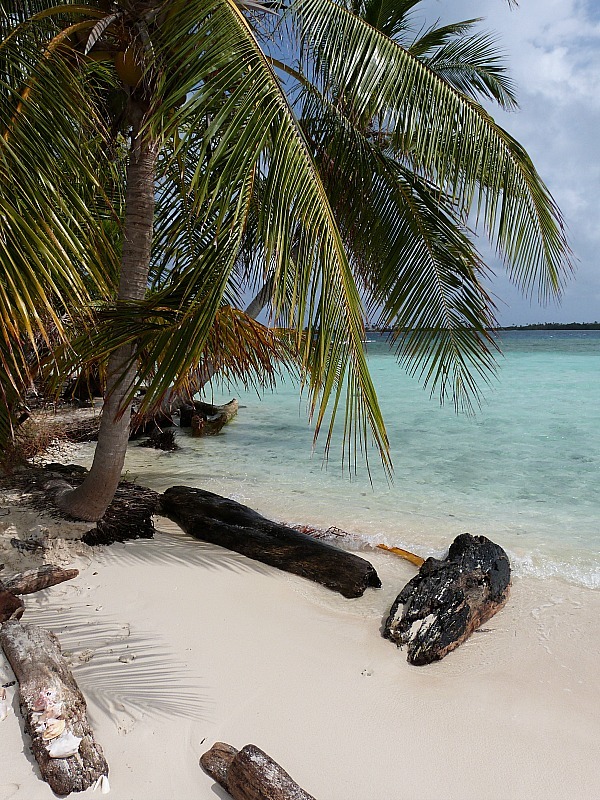 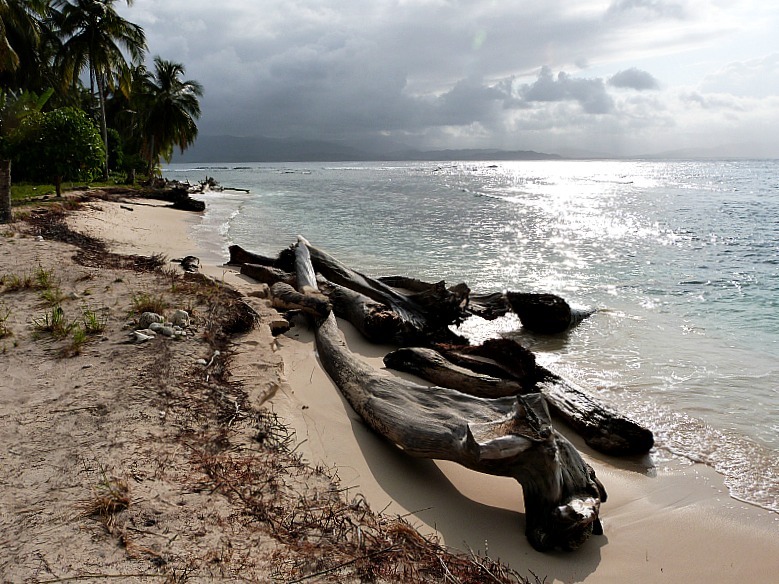 So all in all things were going really well. 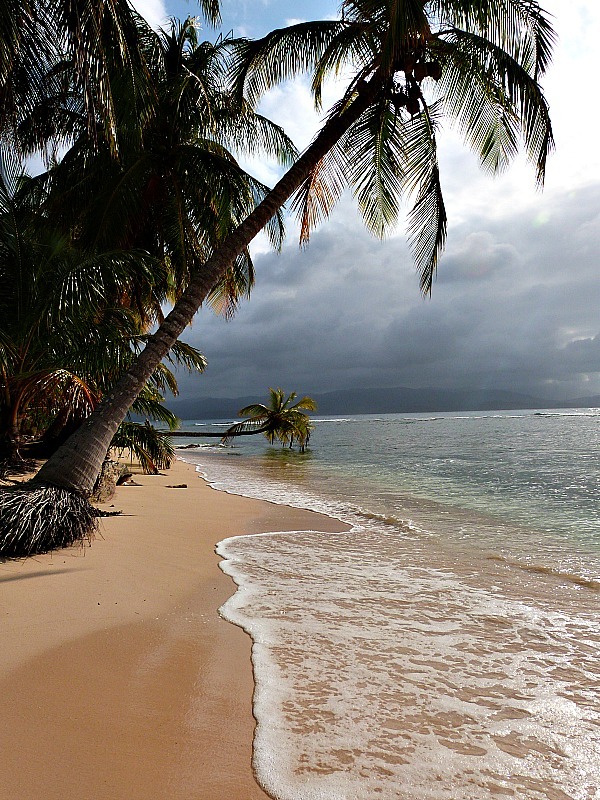 Until we awoke early on Day 3.

Trav and I, along with another 5 or 6 people in our group, had food poisoning. It can be said that food poisoning is no fun at the best of times but take my word for it that having food poisoning on a deserted island where there are no toilets, not even a long drop, is an even more trying experience.

That afternoon we also had 2.5 hours on the boat in big swells which was just the icing on the rotten cake. We were so relieved when we finally got to the island for our last night. We managed to eat a little bit of dinner then went to bed at about 7.30pm, waking up the next morning feeling a lot better.

The last day of our trip looked at the outset to be pretty simple which we were relieved about, only one hour to Immigration on the mainland where we had to get our passports stamped to exit Panama, then 20 minutes more to La Miel, a beautiful beach on the Panama/Colombia border where our trip was ending. 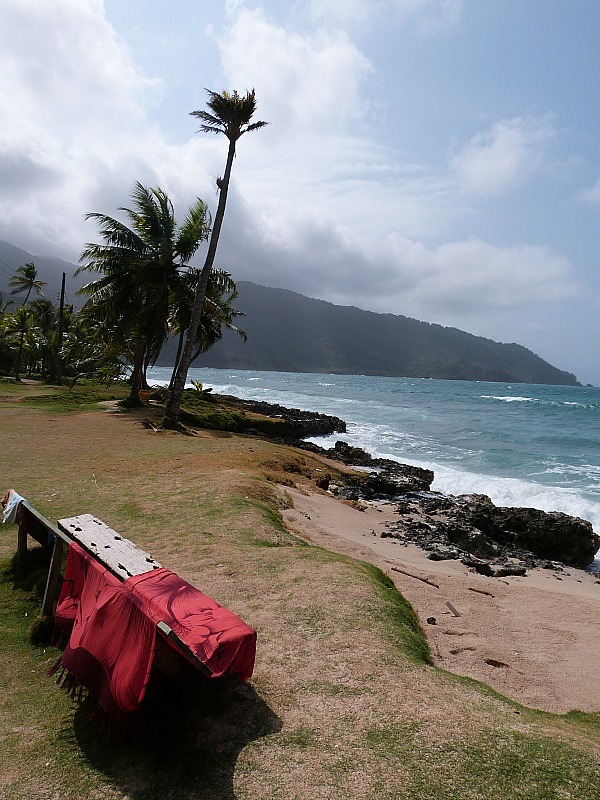 Unfortunately it turned out that the sea was at its roughest that day and it ended up being an ordeal which I am sure I will find funny one day although I’m not there yet.

The sea was way too rough to dock at the Immigration port so after smacking into the Border Police boat a couple of times, our Captain decided to tie the boat between the dock and the beach which meant we had to swim to shore.

I wanted to get the hell out of the boat as it was getting pitched around like crazy so me and Trav were first in the water followed by the others.

It was quite scary as the waves breaking onto the shore were powerful and there were sharp rocks everywhere so a lot of people were bleeding afterwards.

Once on shore, Trav noticed that there was about 5cm of water in the bottom of the ‘waterproof’ container that our passports were in. Everyone’s passport except for Trav’s, safe in its passport wallet, was wet. This included my lovely new passport that took me weeks to get and that I had only had for a couple of weeks!

Immigration wouldn’t stamp our passports until they were dry so we had to sit around for ages in the sun drying them out then, after finally getting them stamped, we swam back to the boat.

There was an art to the re-boarding process. It was important to time the boarding right so that the boat didn’t smack you in the head and knock you out when hit by a wave – exciting stuff.

Once we were finally back on the boat we still had a bit more adventure in store for us as the waves we were in for the last 20 minutes were by far the worst yet and at one point we nearly tipped completely.

When we were back on dry land I vowed to myself I would never set foot on a boat again, then I realised that I in fact had to take another boat that day and then another one still the day after as there is no other way to get anywhere on the mainland in either direction other than walking into the malaria infested jungles and FARC fighting zone.

I think if Trav would have let me I might have risked my life doing that instead of getting on another bloody boat.

After lunch in La Miel, half of the group stayed on a night and the rest of us walked over a very steep hill with our bags; crossing the border from Panama into Colombia, or, Central America into South America.

The border guards completely searched our bags once at the top, taking EVERYTHING out. I am sure you backpackers out there will understand how frustrating that is when you have spent ages packing everything in tightly to fit.

He also helped himself to a tip of US$40 for his troubles which I discovered was missing later that evening, hmmm welcome to Colombia?

I wish I could say that that was it for the day but we then had to take a 20 minute boat ride from Sapzurro to Capurgana in an exceedingly tiny boat with only a little old man at its helm against giant monster waves.

We thankfully survived although at one point we were doubting we would when one of the giant monster waves nearly broke on us. I swear I aged about 10 years that day. 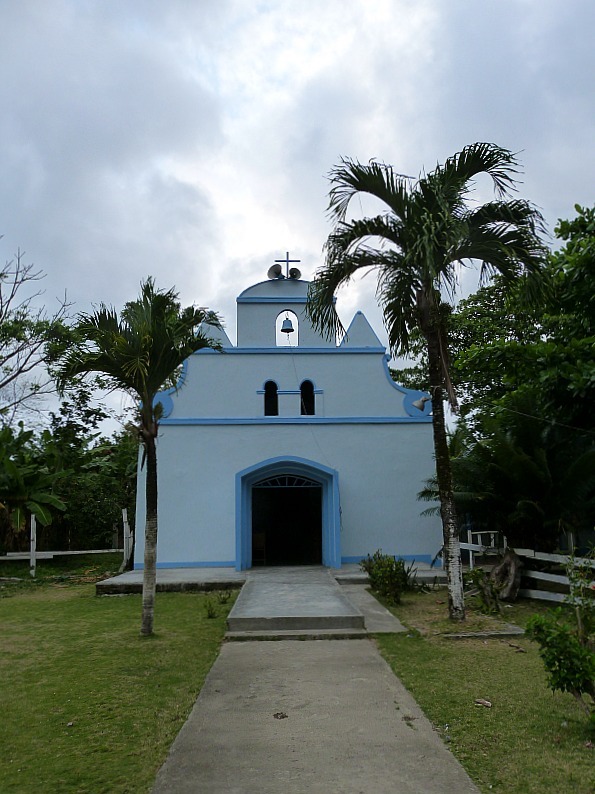 Capurgana had a very Caribbean flavour to it and I am sure I would have quite enjoyed myself there if it wasn’t for the comedy of errors leading up to our short time stay. What a shame.

The next morning after a night in a shitty hostel in Capurgana (which the rest of the group stayed at the night after us and got their stuff stolen), we got the boat to Turbo and bussed up to Cartagena, thankful to be alive and for the ordeal to be behind us.

Taking the cheap route may not always be comfortable but it sure is an adventure!

17 Comments on A Really Bad Luck Week in Panama