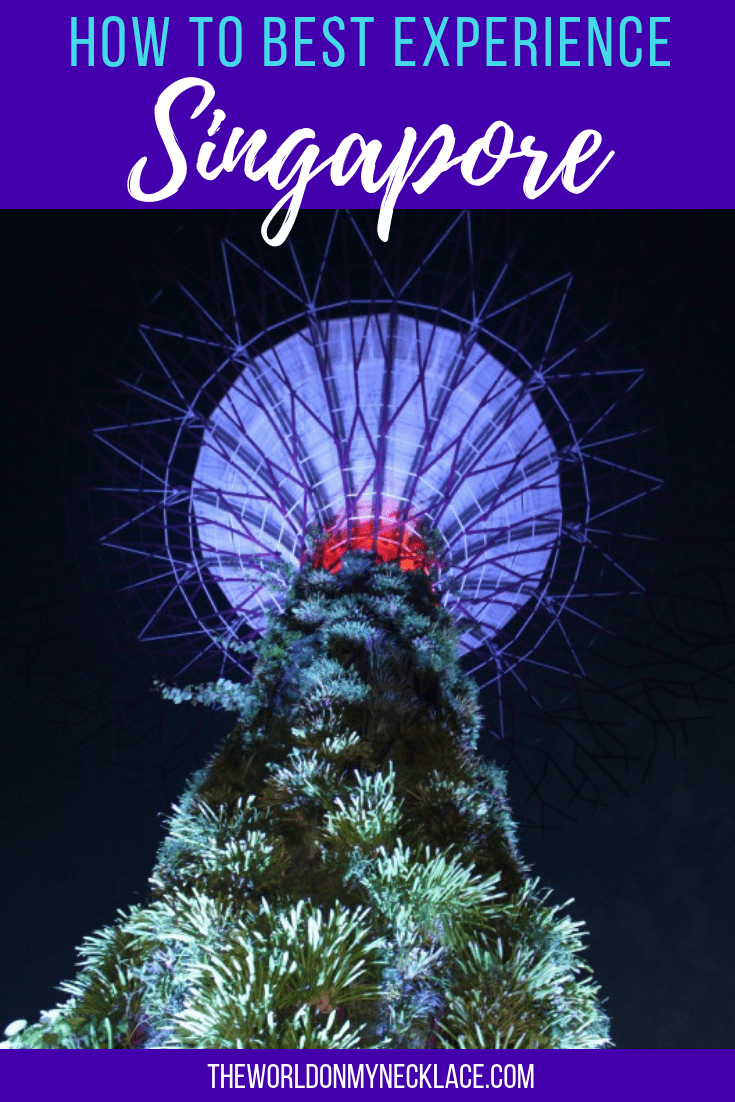 Singapore is a juxtaposition of the old and new.

Between the gleaming skyscrapers there are beautiful colonial buildings, among the shopping centres there are jungled parks. Basic hawker centres sit beside world class restaurants. I love the diversity and the contradictions of the city. It makes Singapore vibrant and exciting.

Along with enjoying the natural aspects of Singapore that are surprisingly prevalent, we also enjoyed the fact we were in a truly international city. More than anything, this was reflected in the cuisine.

The food in Singapore is simply incredible. There are so many people from all over the world that live here, in particular from other Asian countries, and they have brought their cuisines with them. We didn’t have a massive budget during our time there but nearly every meal we had during our five days there was extremely delicious.

We tried a lot of dishes from the local hawker centres, which are basically a bunch of street food stalls under a big roof. There are quite a few of them scattered around the city and they are a lot cheaper than eating at restaurants.

There were also food courts in the many shopping centres which, although not as cheap as the Hawker Centres, were still delicious and convenient. 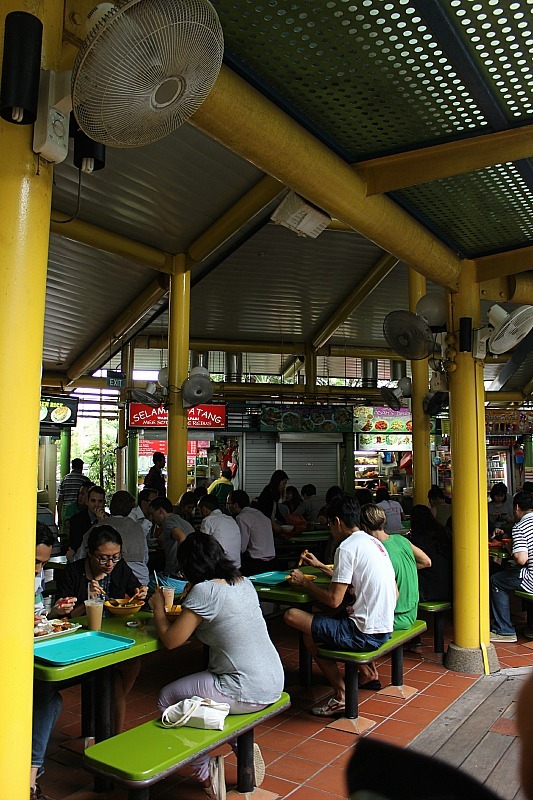 The main dishes I knew I had to try during our time in the city were the iconic Singapore specialties; Chilli crab and curry puffs. I ate a lot of curry puffs, which are little pastry pies filled with delicious curried chicken and boiled egg. They were cheap and satisfying and great to snack on.

We were told to try Chilli crab at the chain seafood restaurant, Jumbo. Eating it was a messy ordeal; we knew it would be when we were given a whole crab slathered in sauce.

I got it everywhere, including some of it actually in my mouth. I am not an experienced crab cracker and although it was kinda fun to start with, it quickly got old the hungrier I became. I definitely need to practice more! 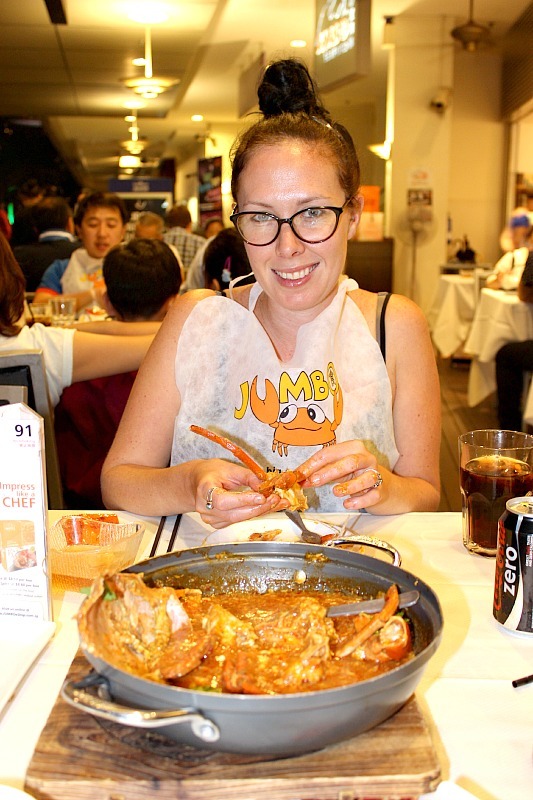 Overall, I wasn’t a fan of the slimy bits of crab in the sauce but the sauce flavour was delicious and the chunks of crab that I managed to pry free from the shell were tender and buttery.

Other favourite eating experiences included sitting by the river at Gardens by the Bay where we ate sticks of chicken and prawn satay that were cooked on an open grill and eating the best Xiao Long Bao I have ever had at Paradise Dynasty Restaurant in the airport.

A lot of my memories of our time in Singapore revolve around food. They are very good memories.

We stayed at the apartment of one of Trav’s friends from South Africa, about half way between the city and the airport along Singapore’s East Coast.

He lives in a massive apartment complex complete with gigantic pool, BBQ huts, shops and even an onsite restaurant. The view from the deck was stunning, especially at night when we could see the lights of the many container ships anchored out in the Singapore Strait.

Swimming in the pool was a great way to escape the intense humidity and there were a couple of resident kitties that hung around down there so I dropped by a few times to cool off. 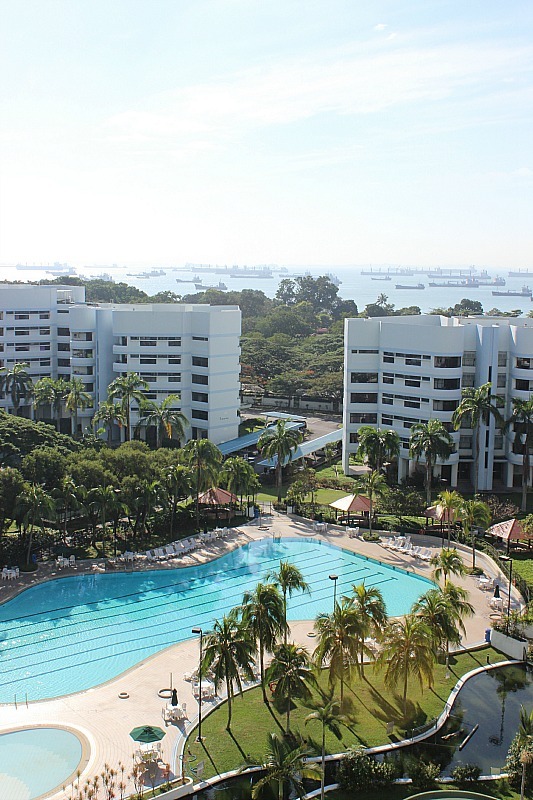 I’m not usually much of a shopper, even less so when I am on holiday and would rather be out enjoying the sights, but I couldn’t resist the siren song of Orchard Road.

Swanky and high end, this homage to materialism was home to a few of my favourite UK chains, in particular H&M and Forever 21, as well as some great international food courts where we grabbed some pretty stellar dumplings. The mall air conditioning may also have had something to do with lingering in this shopping mecca.

We spent one rainy day in Chinatown, firstly eating at the brilliant Maxwell Road food centre then venturing to the beautiful Buddha Tooth Relic Temple, which is a Chinese Tang Dynasty style temple that is also a Museum teaching about Buddhism.

It is a calming place and is very beautiful, with many Buddha statues in the ground floor temple. The top storey is a sacred room that houses what Buddhists believe to be one of Buddha’s teeth, recovered from a collapsed temple in Myanmar in 1980.

There is no photography allowed in this special room and it has a hushed aura of spiritual energy that is palpable. The large canine tooth is on display in a stupa that is composed of 320kg of gold, donated by devotees. 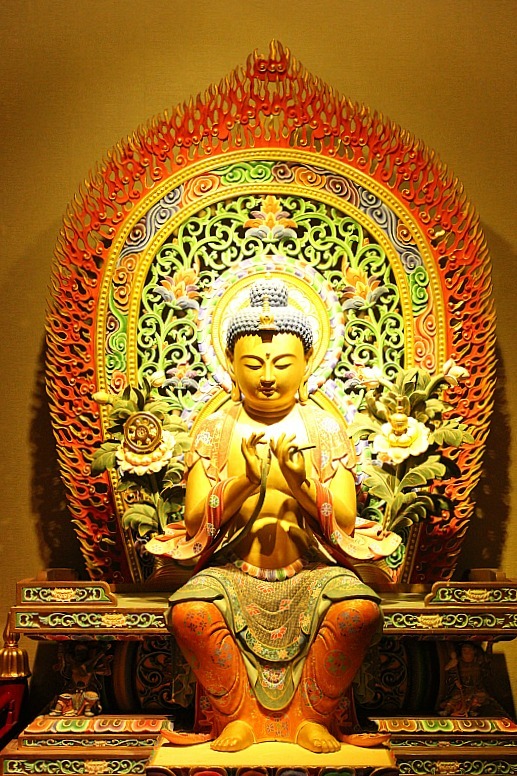 There are other temples around the world that also claim to possess Buddha’s tooth, including the Temple of the Tooth in Kandy, Sri Lanka. Who knows if it is really his tooth or not but the place certainly feels like hallowed ground.

The museum was very interesting also, and I came away with a deeper understanding of this peaceful and beautiful religion. 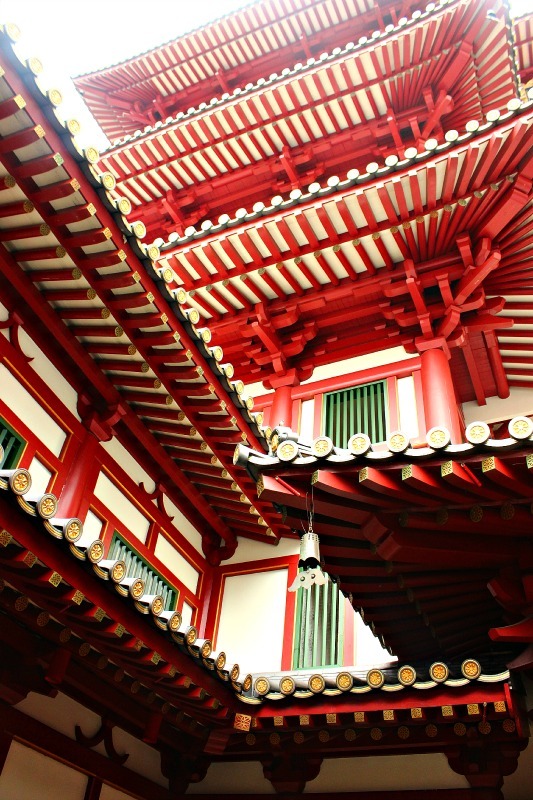 Out of the calming temple and back in to the frenetic pace of Chinatown, it was still raining buckets.

After buying an umbrella, we wandered along the open markets lining the streets that sold waving cats and other random trinkets of red and gold: The colours of Chinatowns around the world. 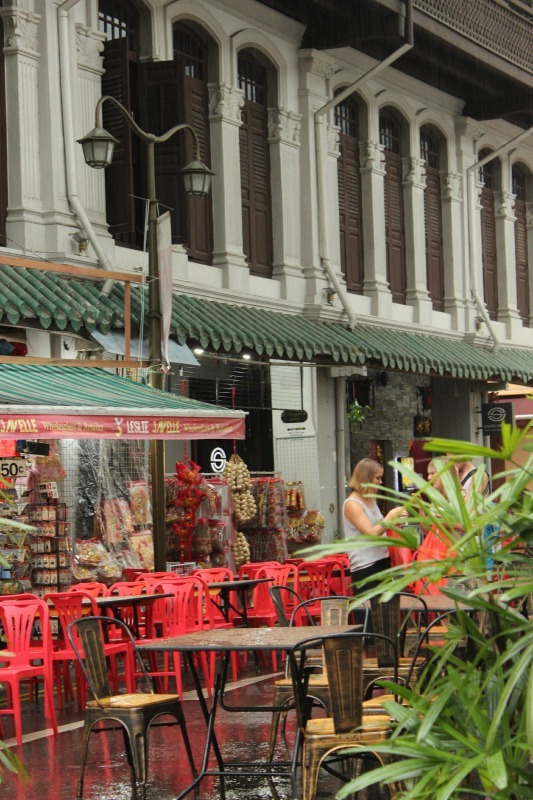 Red and gold lanterns swayed on lines strung in zig zag patterns above the rainy streets; lined by terraced shopfronts with shutters rimmed in vibrant colours. 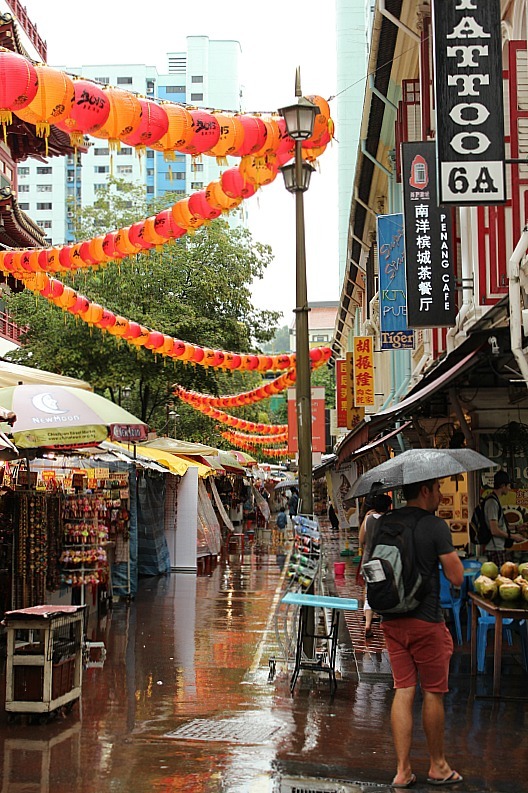 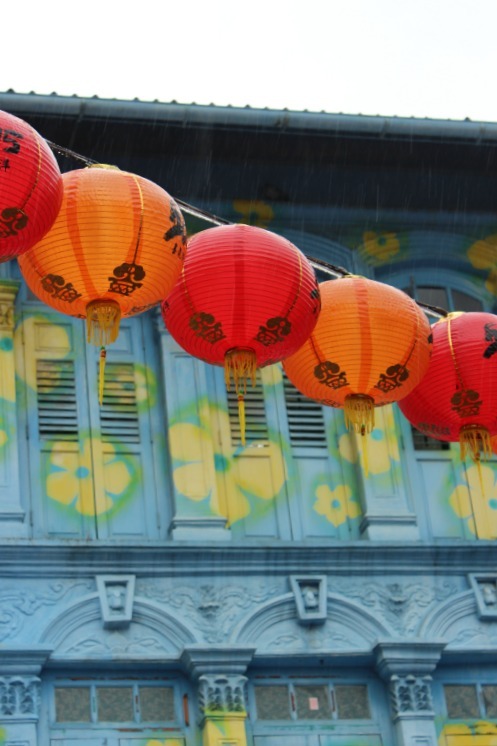 Probably the most famous building in Singapore, the Marina Bay Sands sits across the water from the downtown core. This luxury hotel is made up of two tall towers with what looks like a surfboard perched on top and is known for its infinity pool with an incredible view. I would have loved to stay here so I could experience it for myself but at a price tag of over $400 per night for a standard room, it was well out of our meagre budget.

We made do with the view from the cocktail bar next to the pool where we met one of my old work mates from London and her husband for an afternoon catch up drink. The drinks were overpriced but we avoided the steep observation deck fee so it was definitely worth it. 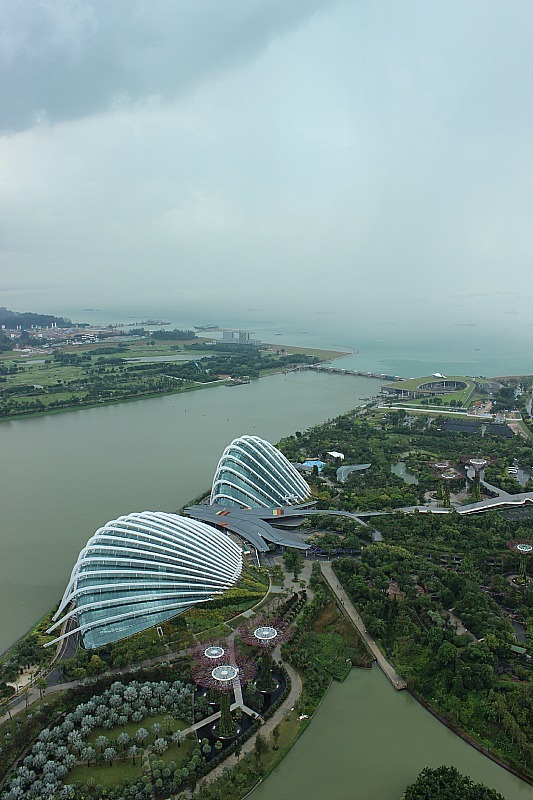 Wandering riverside was one of my favourite things to do in Singapore, especially at night when the air was cooler and the buildings were brilliantly lit up. The imposing and regal Fullarton Hotel was a favourite landmark, which along with the famous Raffles Hotel is a relic of Singapore’s colonial past. 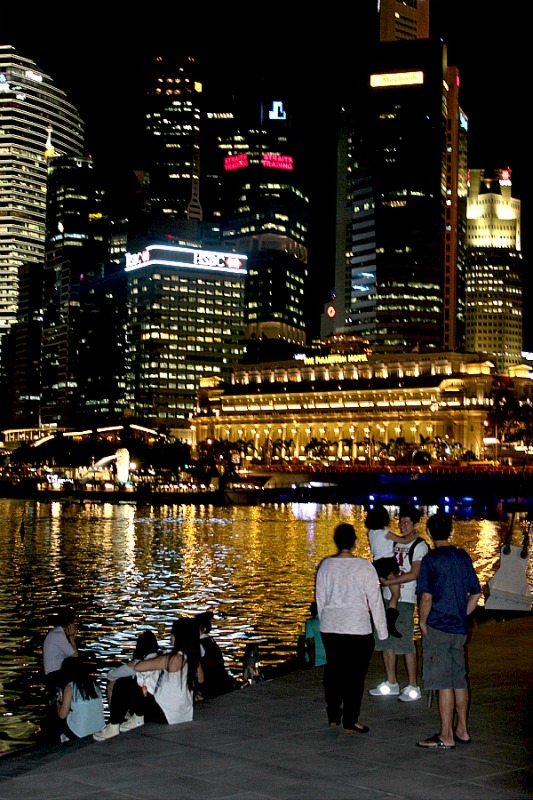 We had planned to visit Raffles for the iconic Singapore Sling cocktail at the Long Bar but then I remembered that I hate gin, and so we just wandered into the inner courtyard for a look instead.

Next to the grandeur of buildings such as these, the rowdy Clarke Quay and Boat Quay seemed gaudy and over the top.

Lined with Irish Bars and chain restaurants, it felt like I was back in Vegas but on a much smaller scale. Business suited corps spilled out of bars and onto the pavement, getting their drink on after a hard day pushing pencils. 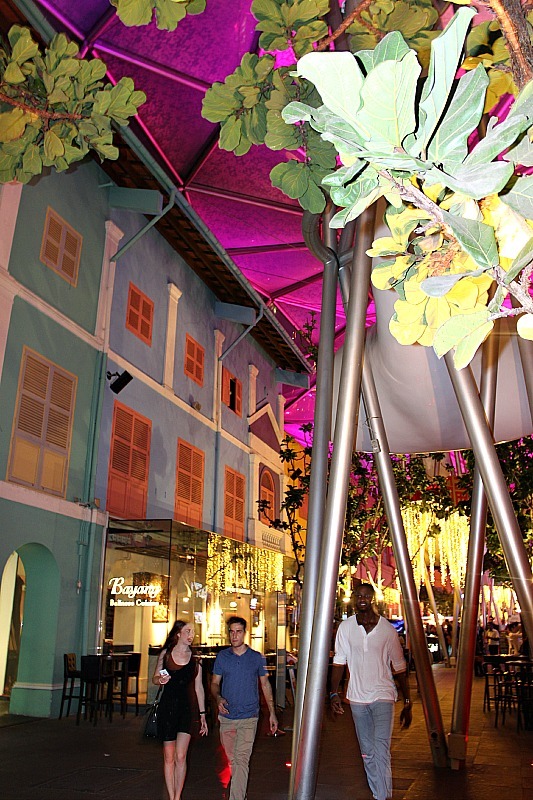 Clarke Quay is the flashier of the two and is basically a pedestrian mall that is sheltered by giant futuristic umbrellas. Visiting at night, there were colourful lights strobing above the pedestrians and music blaring out of every establishment along the mall. Not really my cup of tea but worth visiting for the show of lights.

The cleverly designed Helix Bridge was one of my favourite spots in the city at night. Beautifully accented with electric blue LED lights, the bridge has viewpoints along its length that afford lovely views of the city across the water, the imposing structure of Marina Bay Sands and the bridge itself. 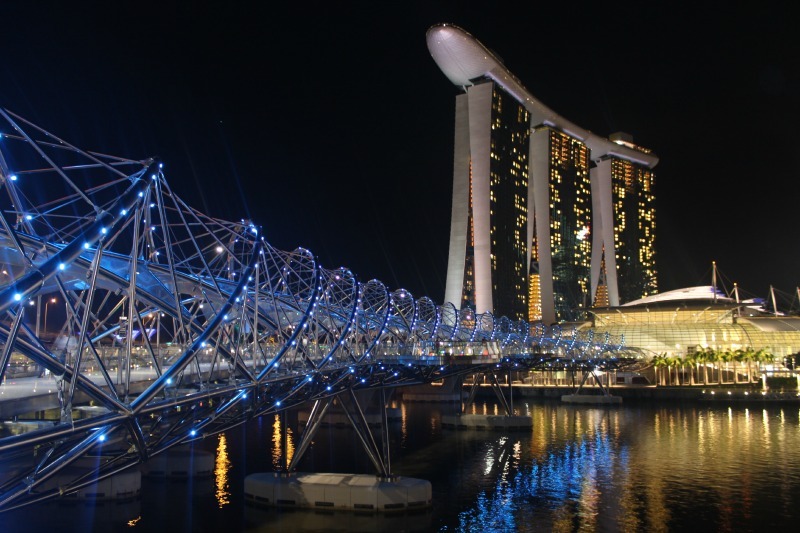 I never thought I would find the Super trees at the Gardens by the Bay so enthralling, but I did. After exploring the beautiful gardens before the light began to fade, we headed straight for the Super tree grove as soon as the trees lit up.

Their sheer size is a big reason for their impressiveness, and when coupled with the brilliant colours that pop out of the night sky, it is hard not to be impressed. I sat among them, marvelling at their massiveness; giant beacons in a darkening night sky. 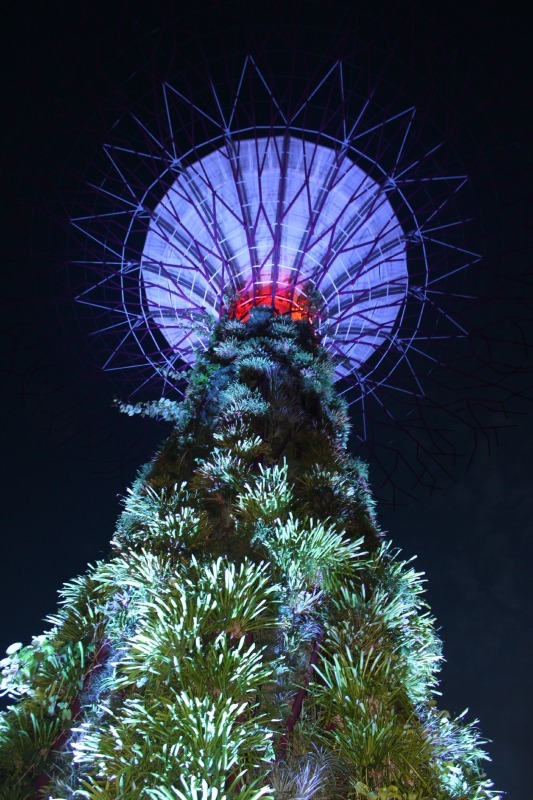 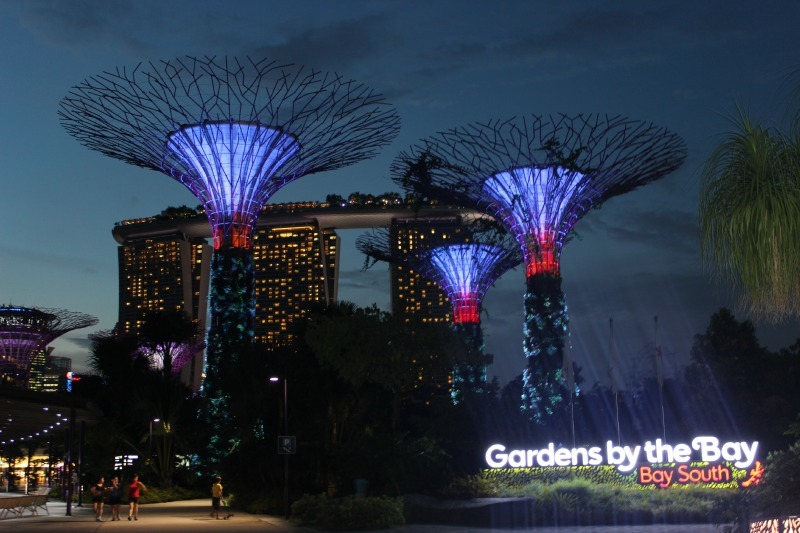 Just as we were about to leave music filled the air. We didn’t know there was a light show every evening and it was pure serendipity that we were around to see it. The trees changed colours, synchronised to full effect with the music. It was a grand display and a definite highlight of my time in Singapore. 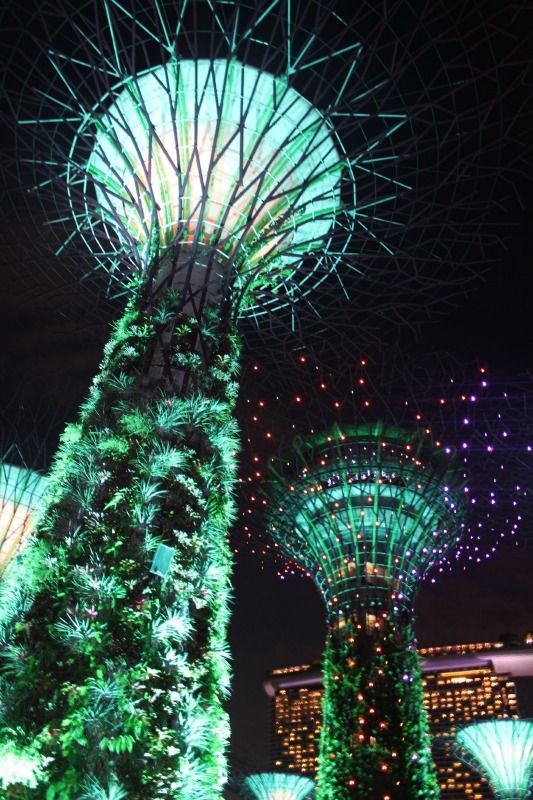 Mostly Singapore came off as classy lady who was modern in most respects but still retained her old world charm.

But she definitely has a seedy side.

One evening our hosts took us to a hole in the wall Karaoke bar (known as a KTV bar) away from where most tourists would frequent; east of the city core.

The singing was pretty bad and hilarious but what I noticed after enduring the musically challenged singers for a while was that there were pretty young hostesses literally hanging off the guys at each table.

I found out from our host that depending on what street you are on, they would in fact be prostitutes that work in the bar.

Apparently we were in a street where the Karaoke bars were in fact just that, with the hostesses only flirting with customers and not giving them a ‘special’ service if they paid extra.

It was definitely an eye opener as I hadn’t heard how rampant prostitution is in Singapore.

I thought that five nights in this small country would be enough but it wasn’t even close. There is so much going on here and I didn’t sample nearly enough of the incredible food. I am still dreaming about the dumplings.

It turned out that Singapore isn’t perfect, but it was pretty close.

6 Comments on How to Experience Big City Life in Singapore