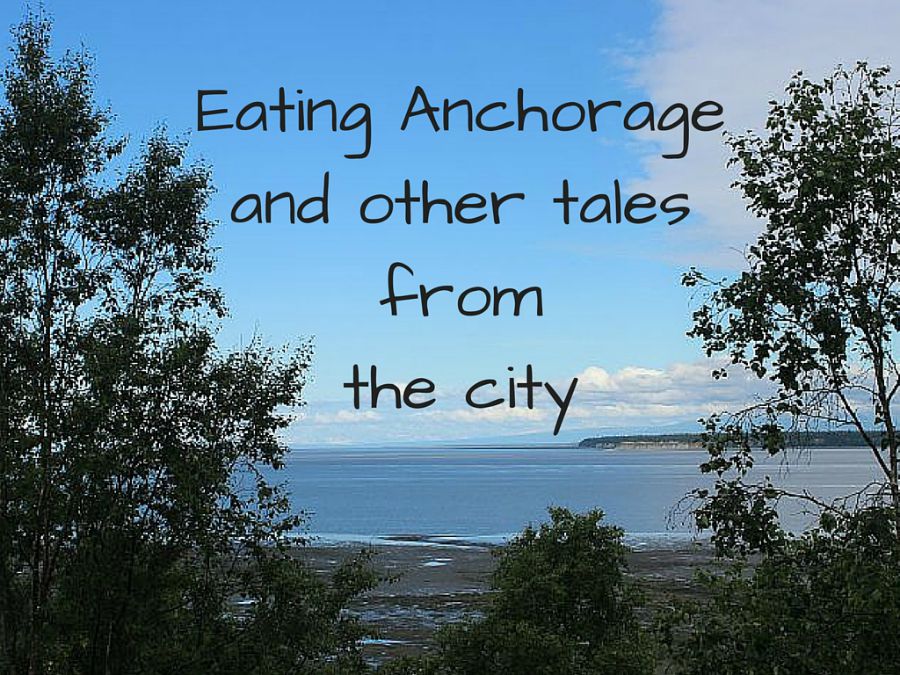 Anchorage was the first stop on my Alaskan odyssey and although the city itself wasn’t that exciting, I still enjoyed my four nights there. And the biggest highlight for me? The food!

For a city with less than stellar weather, Anchorage needs to have lots of indoor options to keep people busy when the weather is not cooperating and what is better on a cold, rainy day than stuffing your face with delicious food? Not much I’d say.

There are lots of fantastic food options to choose from in the Anchorage restaurant scene, and although I only tried a fraction of what was on offer, I had some very memorable meals during my time there.

The Best Food in Anchorage

One of the most popular Anchorage restaurants, especially for breakfast, the Snow City Cafe is in fact so popular that President Obama even visited on his recent tour of Alaska.

Super cosy inside with comfy booths and a upscale diner decor, the Snow City Cafe welcomed me on a drizzly, cold Anchorage morning.

There is usually a long wait for a table but as I was by myself I grabbed a seat straight away at the counter. For my first meal in Alaska I went with the Kodiak Benedict, eggs benedict with the main feature being two large Alaskan king crab cakes.

It was hands down the best breakfast I have ever had and my favourite meal in Alaska. You may think that crab cakes for breakfast is weird but trust me on this one, it really works. 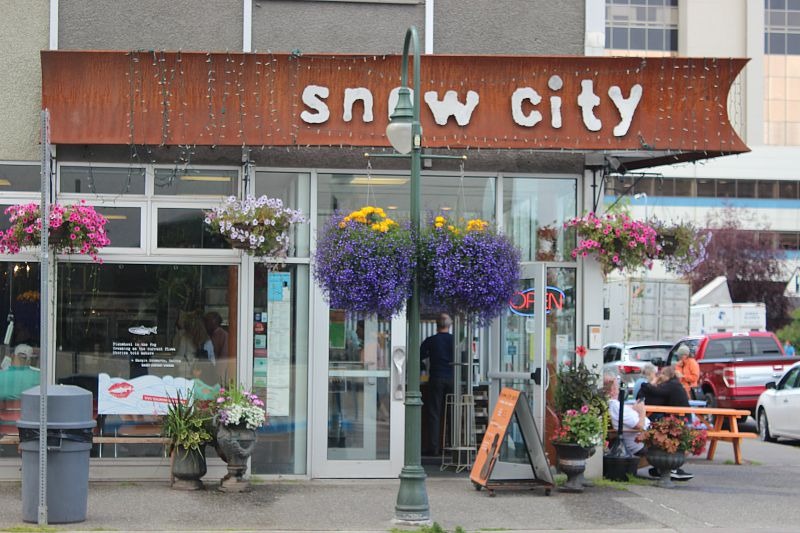 I first saw mention of Humpy’s on Man V Food a few years ago when Adam Richman ate a crap load of King Crab and Reindeer sausage there. It looked like a fun place that is popular with locals as well as tourists and I have wanted to go ever since.

I sat at the counter and chatted to a couple from Texas while trying a couple of the local craft beers. My favourite was the delicious Broken Tooth Raspberry Wheat beer that is brewed locally in Anchorage.

I wasn’t that hungry so I ordered a couple of starters; the soup of the day which was a smoked cod stew and the Alaskan King crab nuggets. Both were delicious, especially the King crab nuggets which had so much flavour and were utterly addictive.

I loved the fun vibe of the place and would definitely go back if (when) I am in Anchorage again. Definitely an Anchorage Restaurant worth a visit!

There are many hot dog carts around the downtown area but I went with one that was highly recommended online: M.A.’s Gourmet Dogs. The owner, Michael Anderson, is known for his brusque manner (think the Soup Nazi on Seinfeld) but the hot dogs are apparently the best in town.

I went with the Anchorage special: a reindeer dog. I am not a big red meat eater and I didn’t know if I would like it but it was surprisingly good and pretty much just tasted like a good quality chorizo hot dog to me.

I topped it with everything on offer: pickles, relish, sauerkraut, sauce, cheese, and grilled onions caramelised in coke. The owner may be rude but he knows his dogs.

I am a big fan of dumplings and the Russian ones on offer at the cute log cabin style Nane’s Pelmenis were simple but delicious, served with hot sauce, spices and sour cream. I went for the potato filled dumplings and they were very similar to pierogi but boiled instead of fried. Great for a light lunch.

Anchorage: Other than Food

A close second to the food, my other highlight of Anchorage was the excellent Anchorage Museum. I ended up going twice, once for free as it is included in the ticket price for the Park Connection bus travelling from Seward to Denali.

The Anchorage Museum has hands down the best First Nations/Indigenous exhibits I have ever seen. There is a massive exhibit on the various tribes throughout Alaska including the Haida people of Haida Gwaii in northern British Columbia.

With traditional clothing, art, and other artifacts on display in large glass cases as well as various videos talking about the tribal traditions, it was very interesting and informative.

Another exhibit detailed the history of Alaska including lots of information about the indigenous groups, Russians, and Americans who came there. With detailed dioramas and displays on how each group lived, it gave me a better understanding of Alaskan history and what has shaped the State.

There was also a temporary exhibit on Captain Cook and the North West passage including his log book and original drawings by the botanist on board. I spent four hours in total at the Anchorage Museum and easily could have spent more.

Another small museum that is worth a look is the quirky Alaska Law Enforcement Museum. As it has free entry I popped in there a couple of times when it was raining and watched the dated video and looked over the hodge-podge of exhibits that included uniforms, news articles, photos and even a restored 1952 Hudson Hornet.

Anchorage isn’t the prettiest place but there is a small walkable downtown with a lot of gift shops that are worth browsing as a way to pass the time when it is raining. And it rained pretty much the whole time I was there. 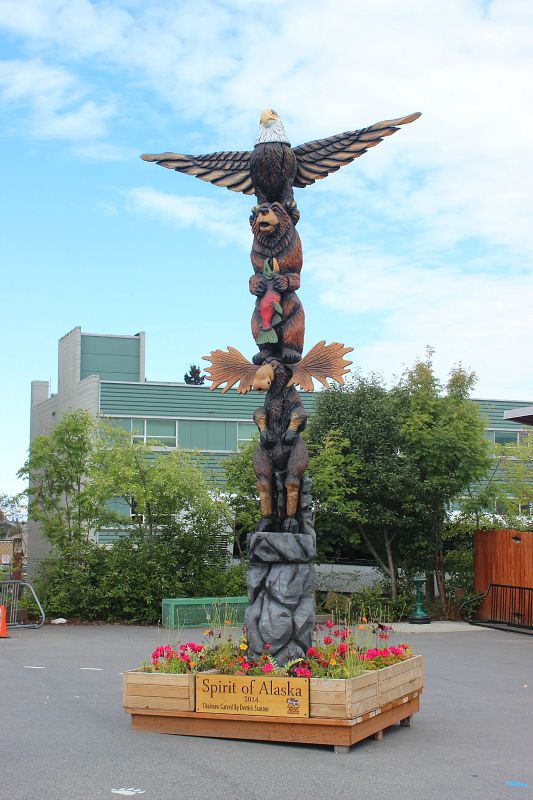 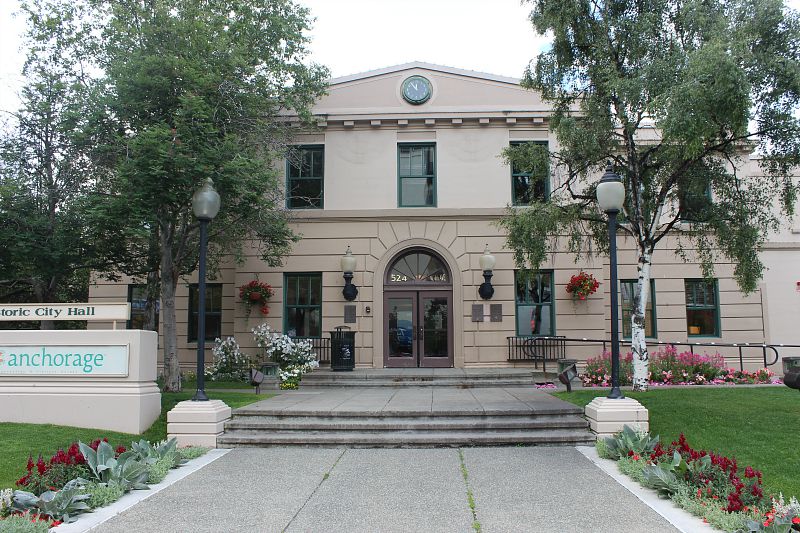 I spent a lot of time in my cosy hostel, the Bent Prop Inn, meeting fellow backpackers in the lounge and catching up on my reading and blogging. But I did go for a rainy walk one afternoon when I was going stir crazy from being cooped up inside.

Starting at the Cook Monument which has a commanding view over the coastline, I then walked down to the Westchester Lagoon, past beautiful houses in quiet neighbourhoods. 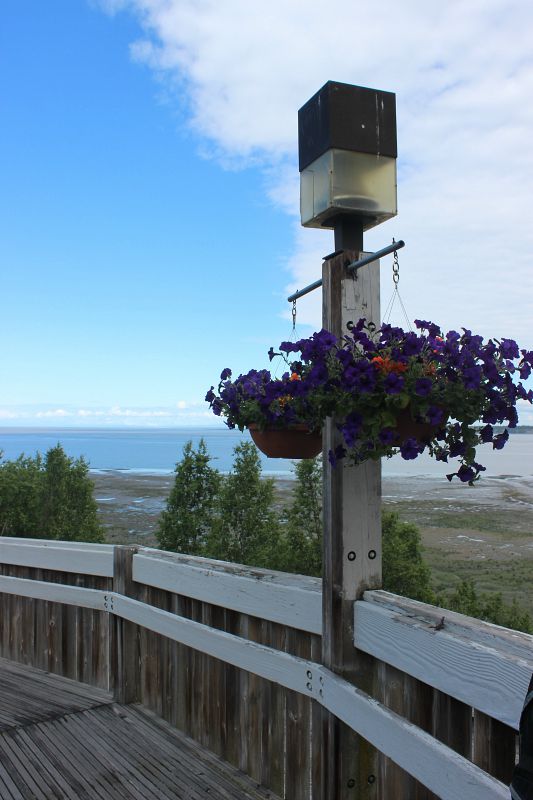 The peaceful waters of the lagoon were dotted with a couple of small islands. Long grasses grew along the banks at the water’s edge and flocks of ducks waddled around the shoreline in the drizzly rain. 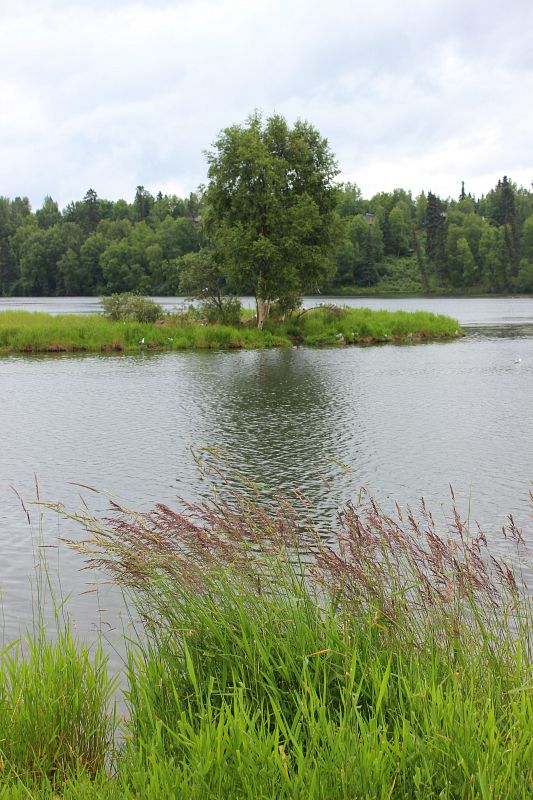 There are walking trails along Chester Creek from the lagoon that lead through tranquil forest, a world away from the strip malls that surround Anchorage. I finally saw a different side to the city. 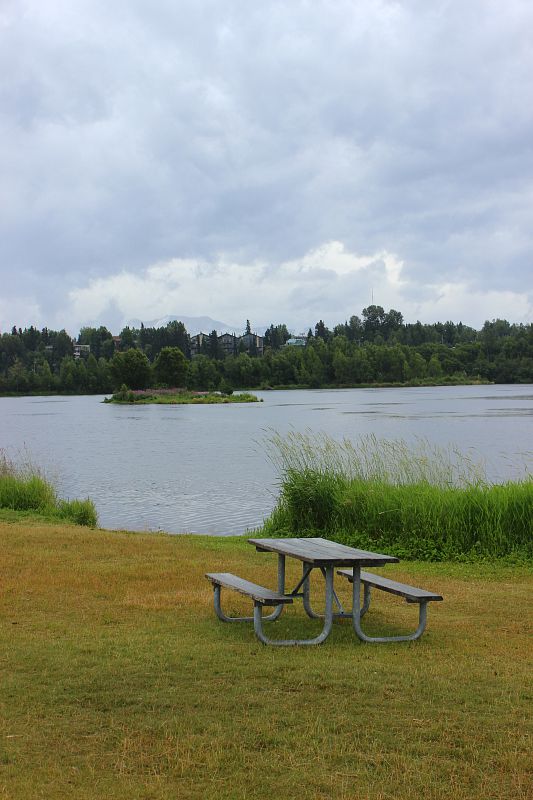 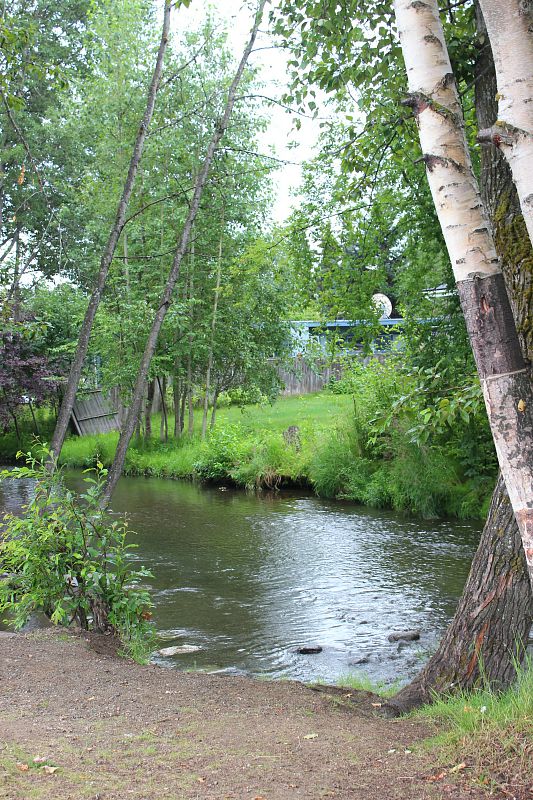 I also did a half day trip to hike up the most climbed mountain in Alaska – Flattop Mountain. But that’s another story.

Although I loved eating Anchorage and exploring the city, what I will remember most about my time in Anchorage is the excitement I felt about being in Alaska, a place that I had wanted to visit for such a long time. A surreal feeling that the next few weeks held so much possibility, with so many incredible experiences yet to come.

I had finally arrived. 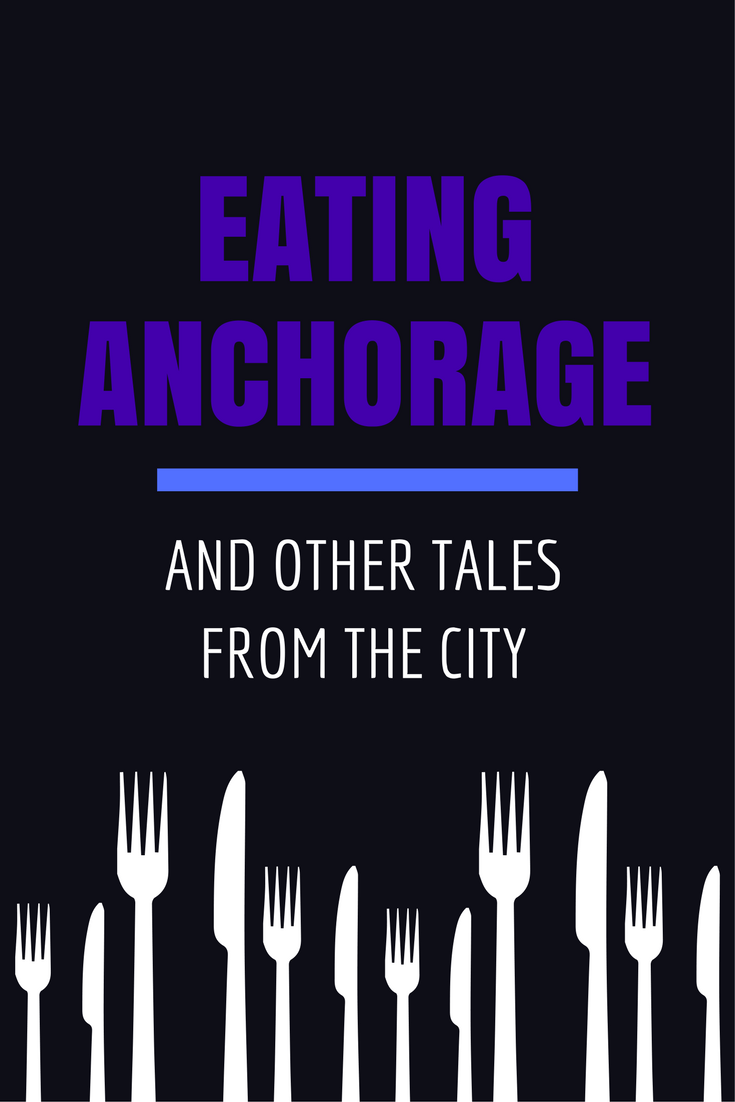 6 Comments on Eating Anchorage and Other Tales From the City