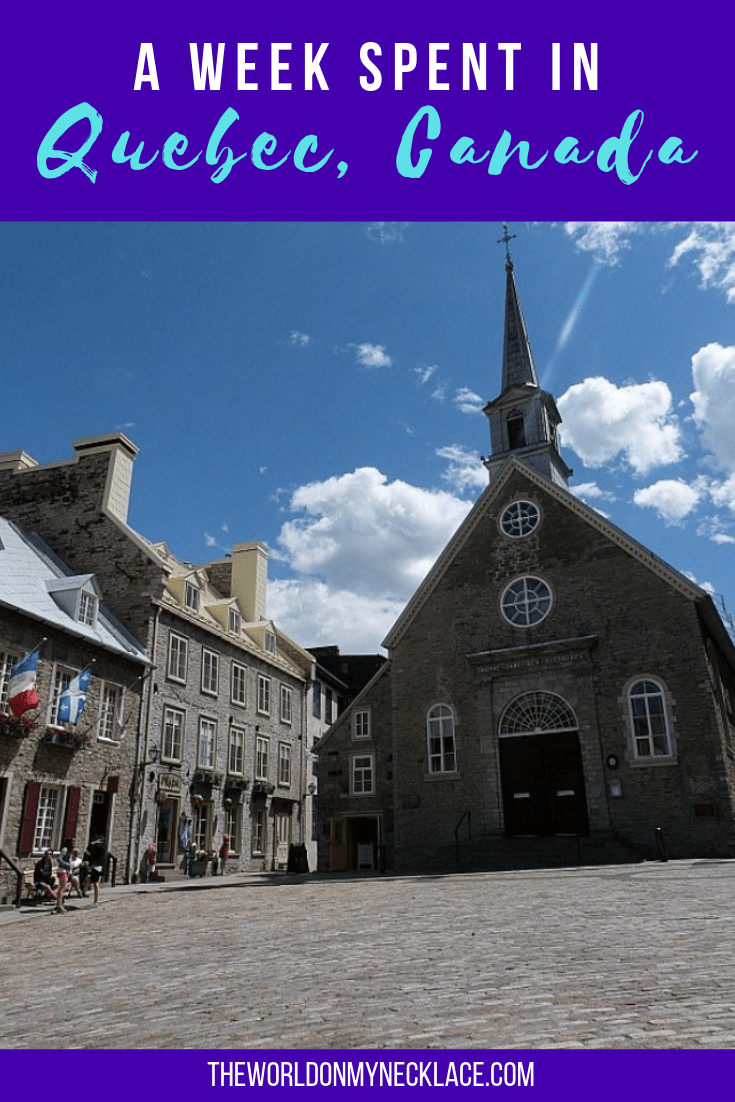 I have been interested in visiting the province of Quebec for a long time, intrigued by what life is like in Canada’s Francophone province.

Our first stop was Montreal. We had set up couch surfing with Mat and Marie, a French Canadian couple living in Verdun, a suburb on the outskirts of the city.

Mat picked us up from the Metro station and drove us back to his place. We met his lovely girlfriend Marie and had a couple of delicious craft beers out on their deck while they made us a lovely BBQ dinner.

Another lovely couch surfing couple living in a friendly, leafy neighbourhood. We were given our own room in their basement and met their gorgeous Siamese cat, Pong, who tried climbing into bed with us a few times. Two weeks later I still have her hair on my clothes!

Mat and Marie took us on a night driving tour of the city, we saw some beautiful churches and old houses, drove across a bridge with great views across the water to the city lights and drove up to the view point on Montreal’s treasured mountain, Mont Royal, for even more spectacular views of the city at night. 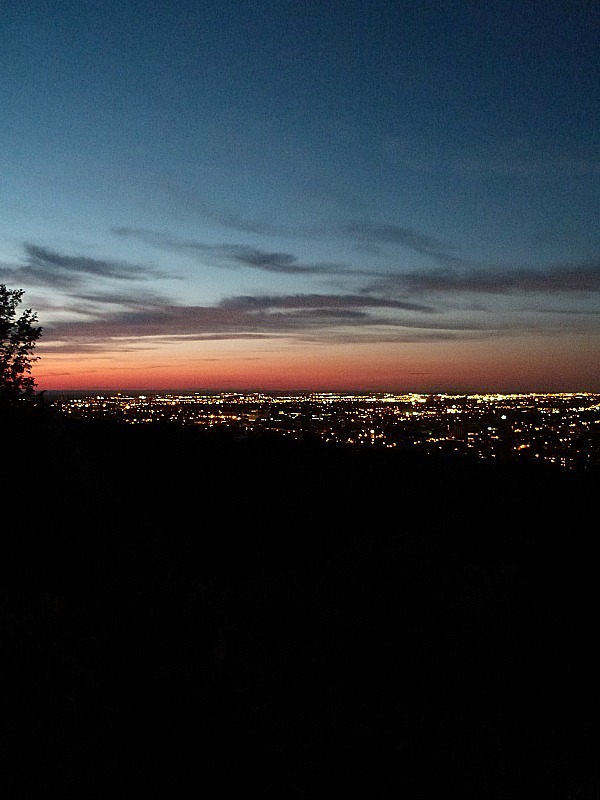 This is one of the many reasons I love couch surfing, we wouldn’t have been able to do this if we were just staying in a hostel unless we paid a lot of money for a taxi or rental car.

We walked to the metro the next day through a beautiful park and went exploring in the city. The downtown has the modern feel of a North American city but we did notice a lot of beautiful 19th century architecture amongst the glass covered high rises. 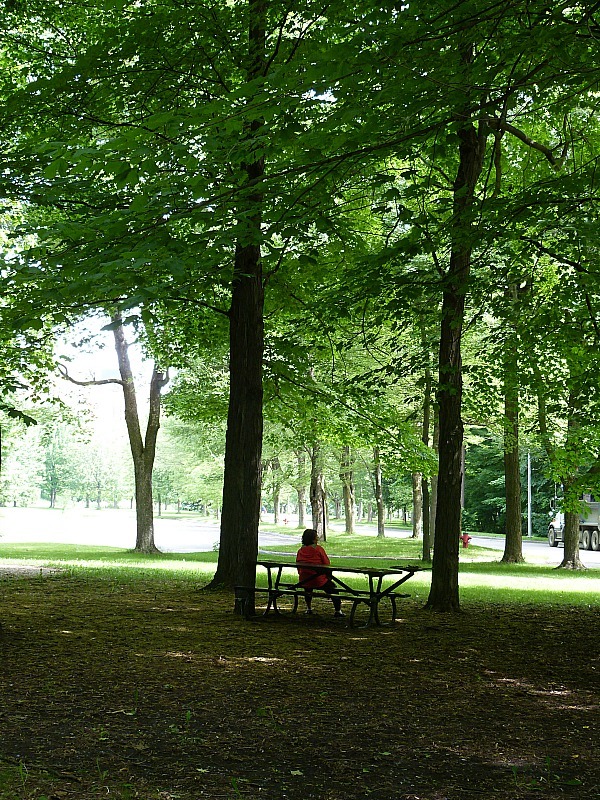 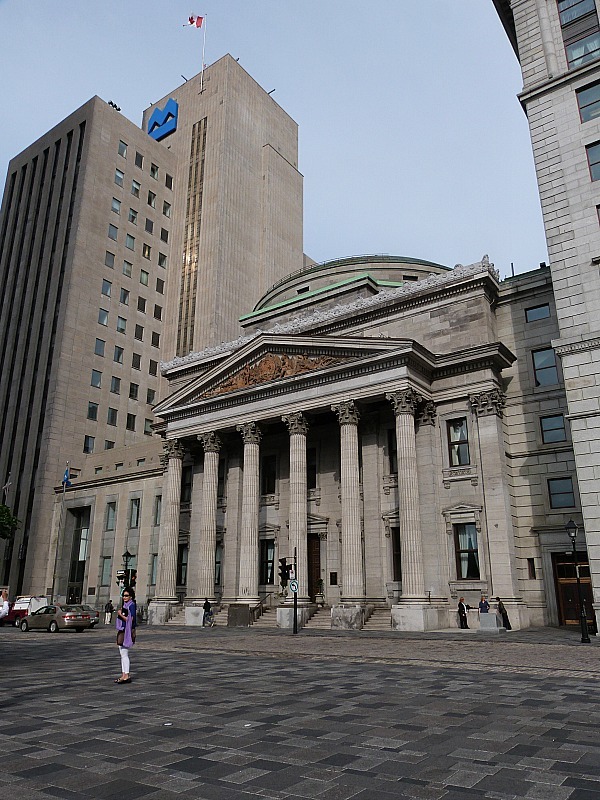 My favourite part of Montreal that we visited was Vieux Montreal: The Old Town and Port. It was like walking through a bustling village in France.

It definitely lives up to its tourism potential with lots of expensive French restaurants on the main plaza, Place Jacques Cartier, as well as a lot of souvenir shops. Despite this it truly is a beautiful place and has such a happy, vibrant feel. 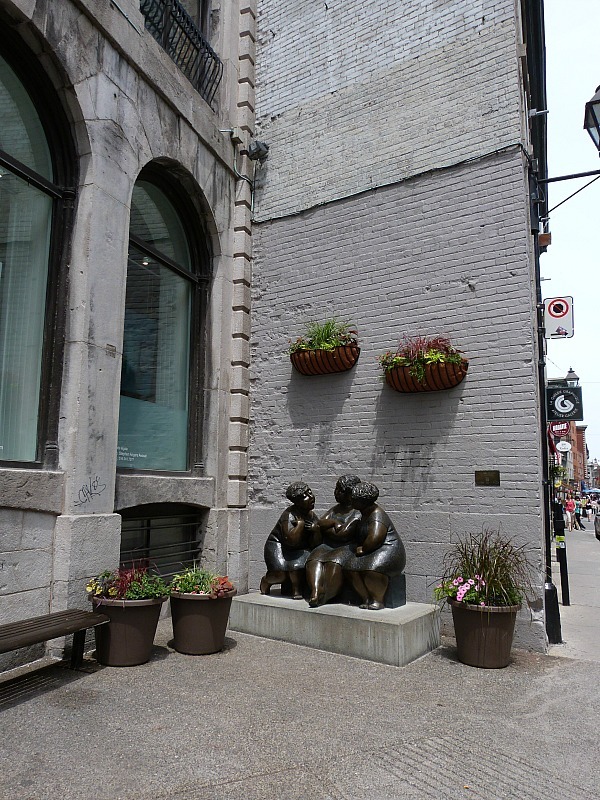 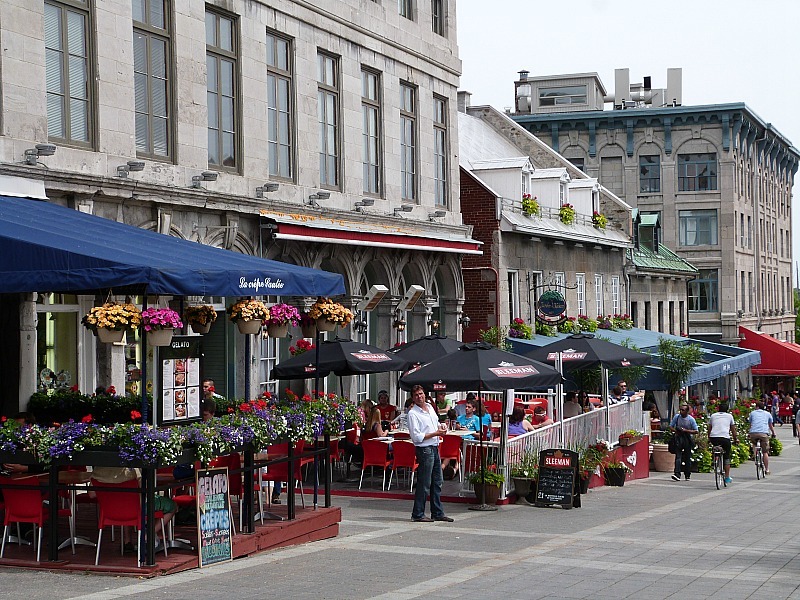 We walked along the riverside at the old port where people were spending their lunch break on the many benches and grassy spots among the flowers. There is a white clock tower overlooking the river so we climbed up there for a nice view (and some exercise). 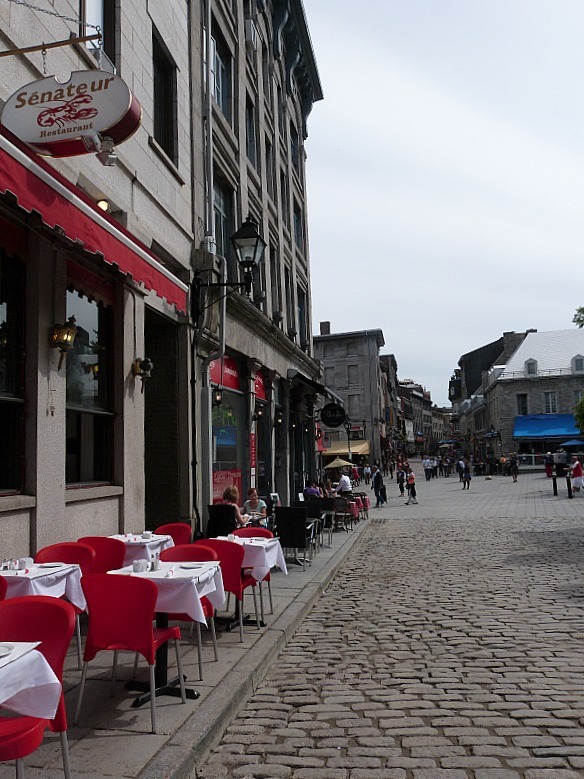 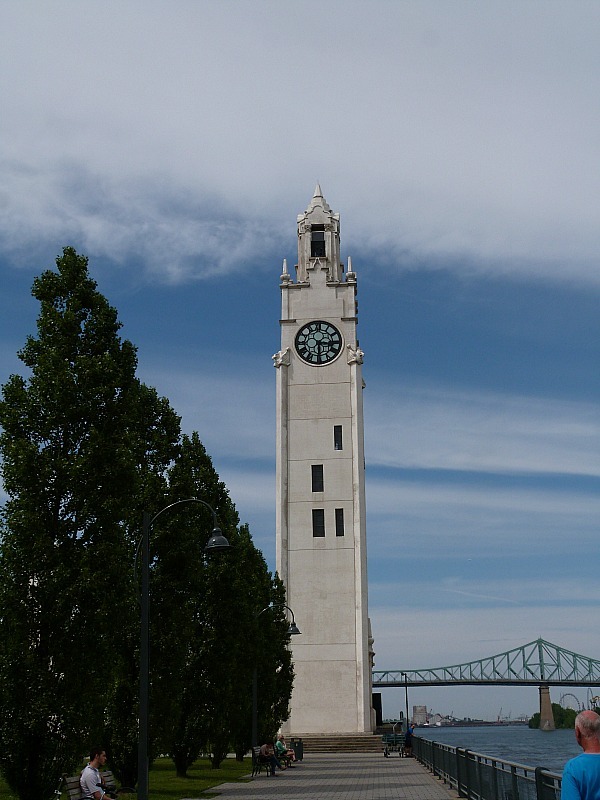 Montreal is actually an island at the confluence of the Ottawa and St Lawrence rivers. It is quite a big island so we couldn’t really tell even from our vantage point at top of the tower.

We headed to Chinatown for a delicious dumpling lunch, enjoyed a Maple ice-cream in Vieux Montreal and I finally replaced the PJ pants I left in Cusco with some moose print ones – I love them! 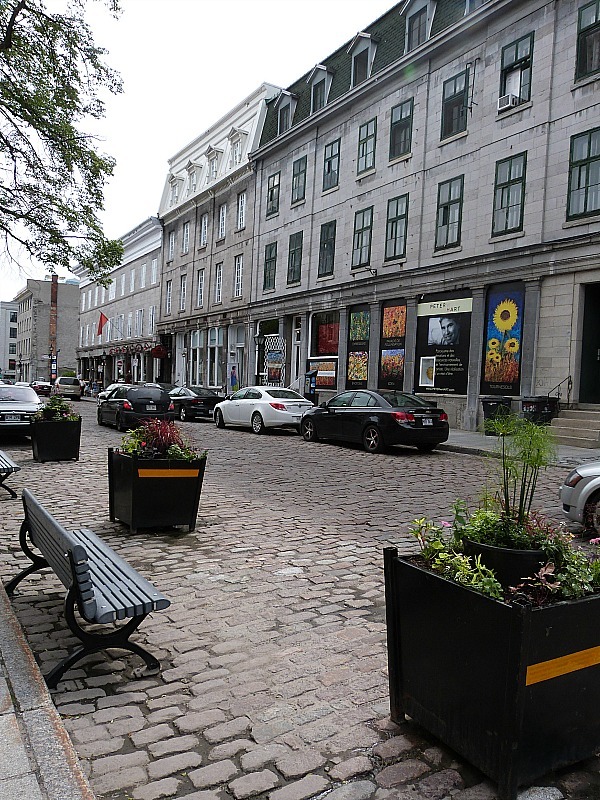 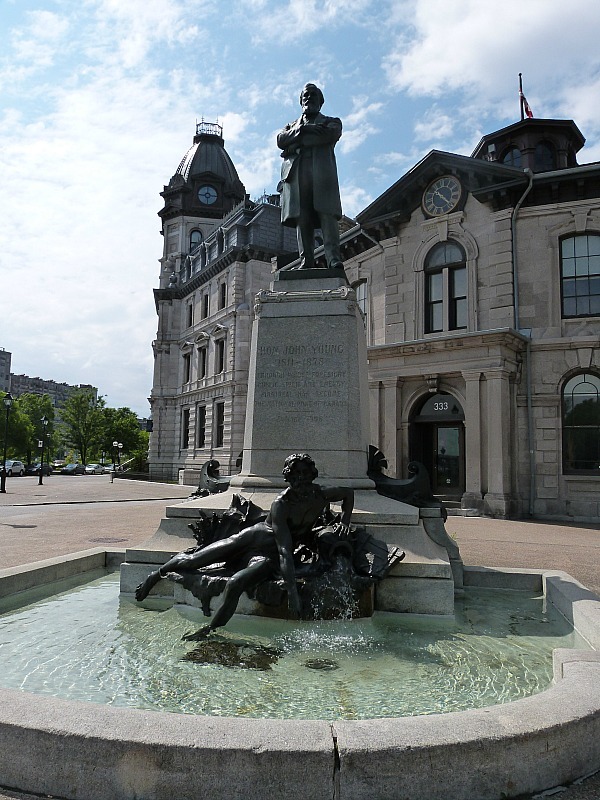 We met Mat back near his place after he finished work and went for a couple of drinks at a new microbrewery. Mat is really into micro-brewed beer and it is something that Trav and I are becoming quite interested in too. There are some really great ones that aren’t too expensive in Quebec. 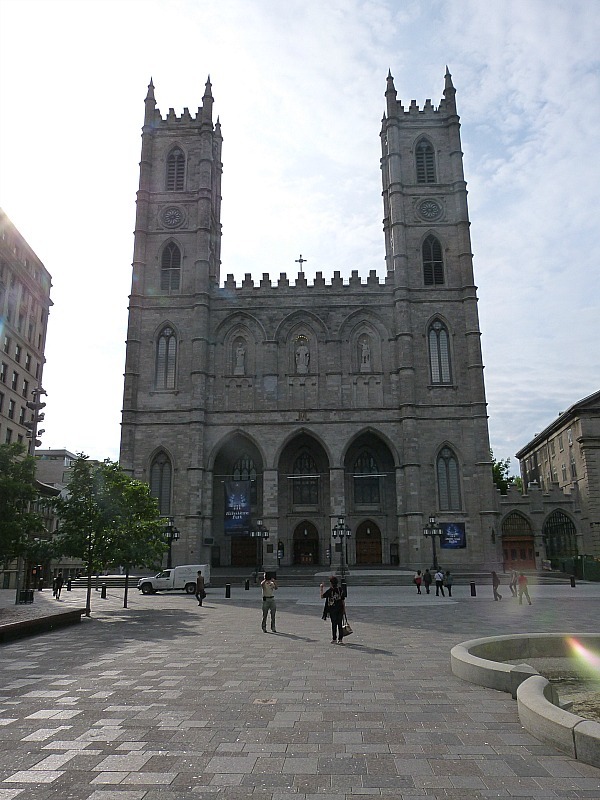 It was raining the next day so we hung out with Pong at the house, then went into the Plateau neighbourhood beside Mont Royal for a delicious thai lunch and a bit of an explore of the funky shops. 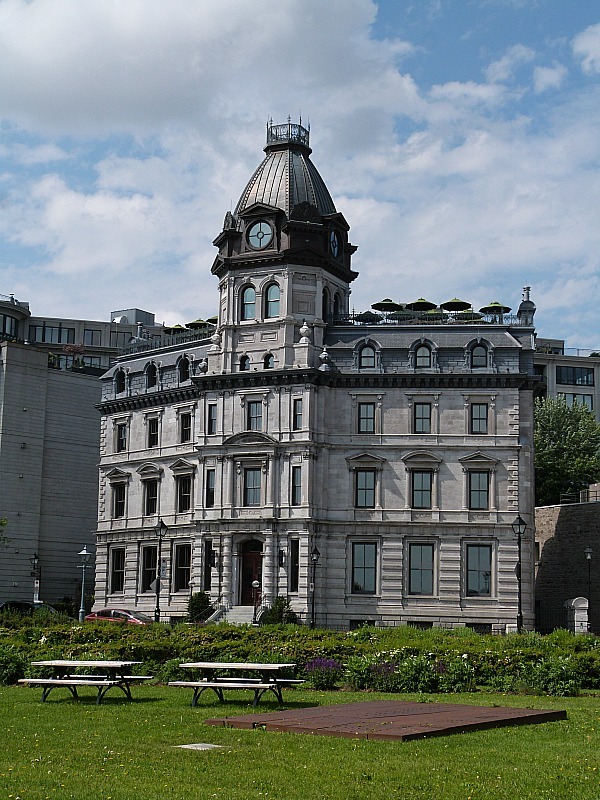 Mat met us at his work downtown in the afternoon and took us through the underground tunnels that people use in the freezing winters to get between office blocks, malls and metro stations. One of the truly unique things to do in Montreal!

We wandered around for about 2 hours, through mall after mall. They had everything down there.

We met Mat’s friends for dinner at Dunn’s, a restaurant that specialises in deli food and smoked meat. I tried the Parisien poutine which was with peppercorn sauce instead of gravy.

Trav had a poutine with shaved smoked meat on top. Tuesday is half price movie night so we joined the throngs and went to see ‘Now you See Me’ – such a good movie!

We left early with Mat and Marie the next day and left our stuff at Mat’s work so we could look around a bit more before our ride share at 1pm.

Wandered back to Vieux Montreal, we enjoyed a ridiculously cheap lunch in Chinatown before picking up our stuff and catching our ride to Quebec City.

It was our first ridesharing experience and the lady was so nice. Her name is Hakima, a Moroccan living in Quebec City. She also had two other ride sharers, two Buddhist Monks!

It was a very nice ride, we were chatting to the monks and learnt a lot more about what it means to be a Buddhist and what their lives are like as Monks. They were a lot less serious than I thought they would be and we had a laugh.

Hakima dropped us at a coffee shop right by where we were doing our next couch surf, in the lively Saint Jean Baptiste neighbourhood. We had a couple of hours to wait until our hosts, Joee and Gabriel, would be home from work.

Joee and Gabriel are such a lovely young couple. They cooked us a delicious dinner and we shared some local Quebec wine with honey and cranberry.

Gabriel had the following day off work so took us for a walking tour through the Upper and Lower Old Towns. I really liked the Old town in Montreal but Quebec City’s is something else. So beautiful and it is the only walled city in North America north of Mexico City. 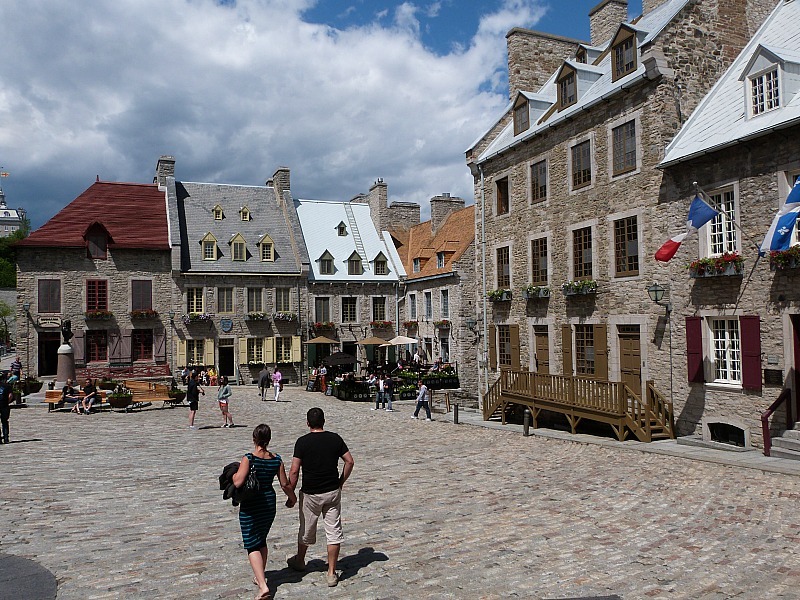 There are some stunning architectural gems including Le Chateau Frontenac, apparently the most photographed Hotel in the world. It is a Fairmont Hotel so like the others it resembles a grand castle and has great views from the top floors. 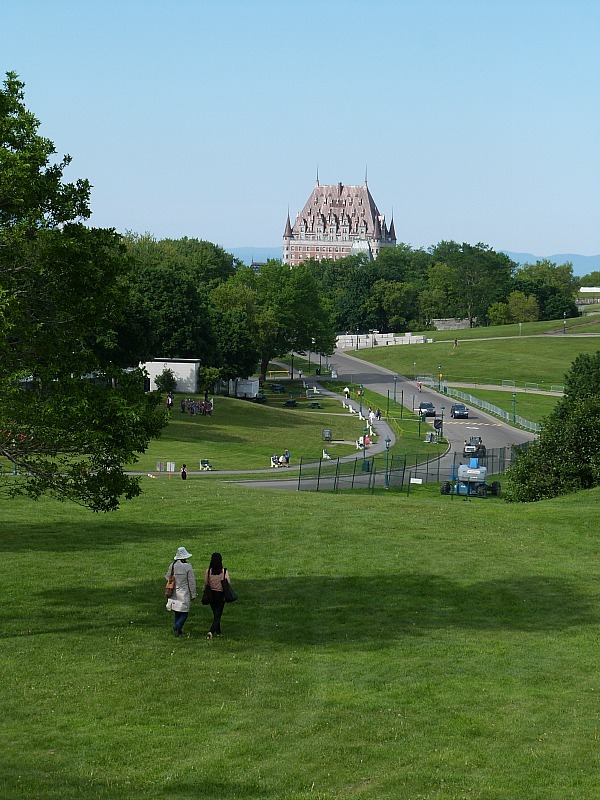 We walked around for a couple of hours admiring our historic surroundings. We visited the flower and produce market in the Old Port, strolled along the Terrasse Dufferin high above the river below and had poutine at one of the places that claims to have invented it, Chez Ashton.

We rounded off our perfect day in Battlefields Park. It is a beautiful park with nature trails as well as the famous Plains of Abraham where the French and the English fought it out in a bloody battle that the English won, despite a lot of casualties on both sides. 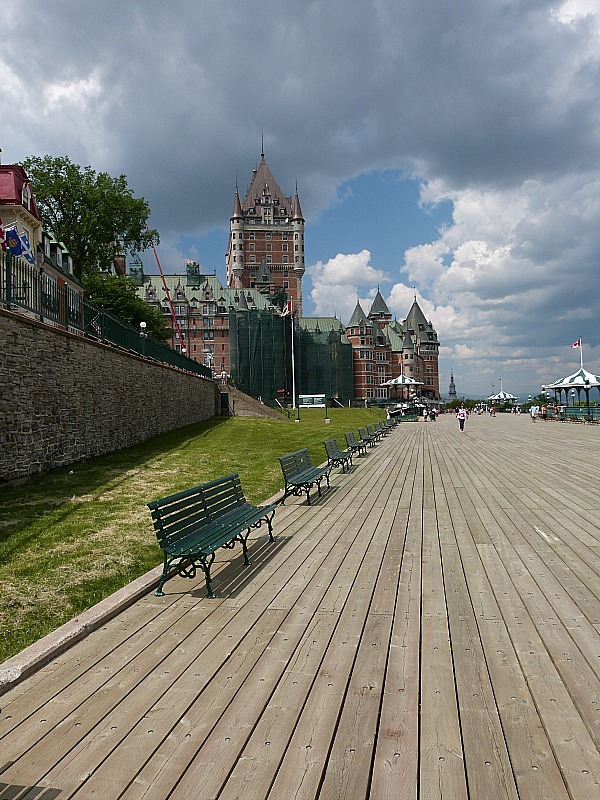 We bought some delicious Quebec Unibroue Rousse craft beer and drunk it while making dinner for our wonderful hosts. 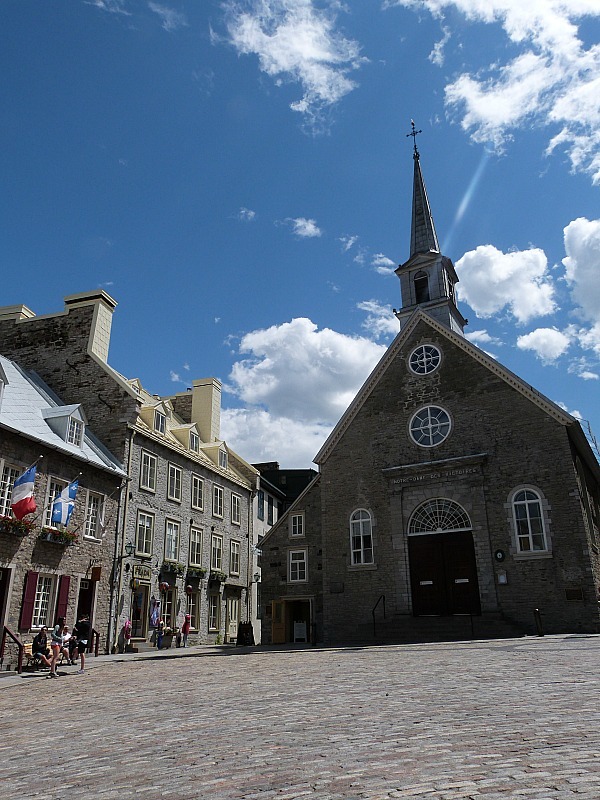 We were lucky enough to have Gabriel with us the next day too as he didn’t start work until the evening. He drove us to Quebec’s answer to Niagara Falls: Montmorency Falls, only 12km from Quebec City. 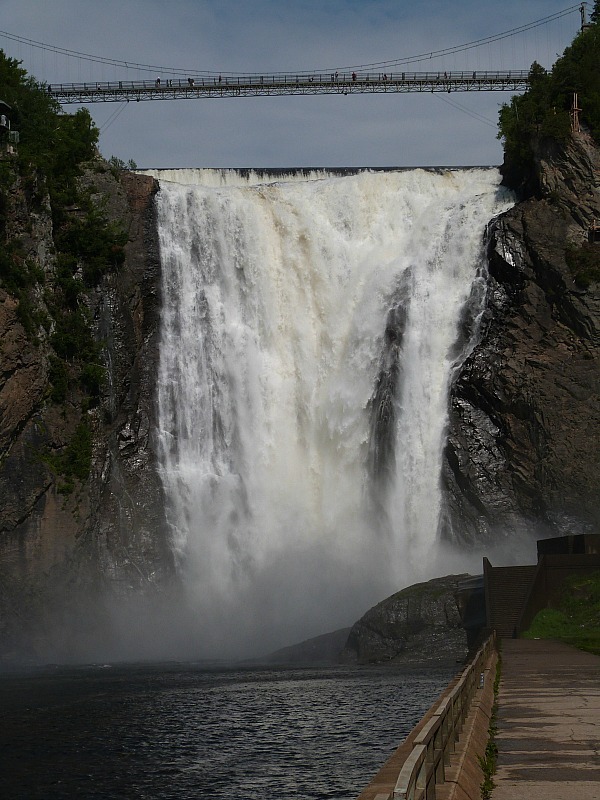 Montmorency Falls are actually higher than Niagara but not as powerful. 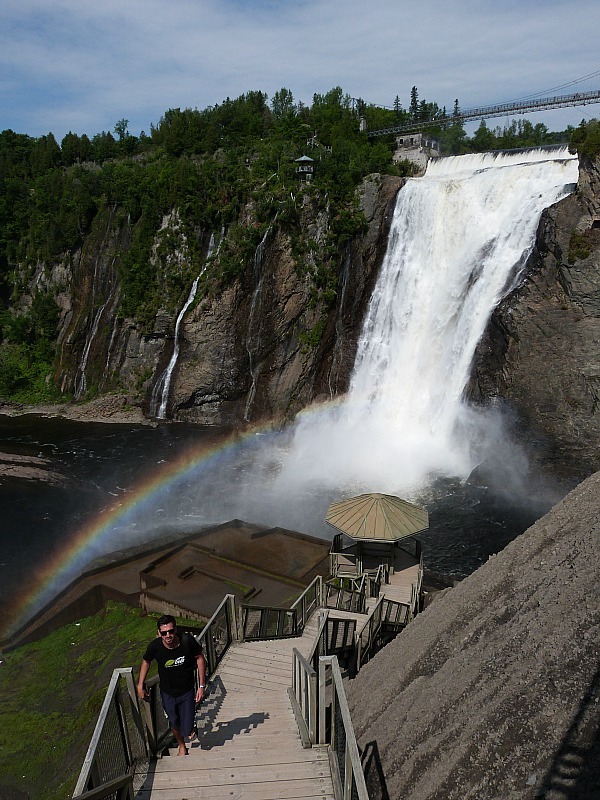 We climbed to the top of many stairs and walked over the bridge above the falls for a different vantage point. Afterwards, we drove over to Ile d’Orleans, a large island known for its strawberries, for a walk along the shore and a drive through beautiful countryside, so close to Quebec City but like another world. 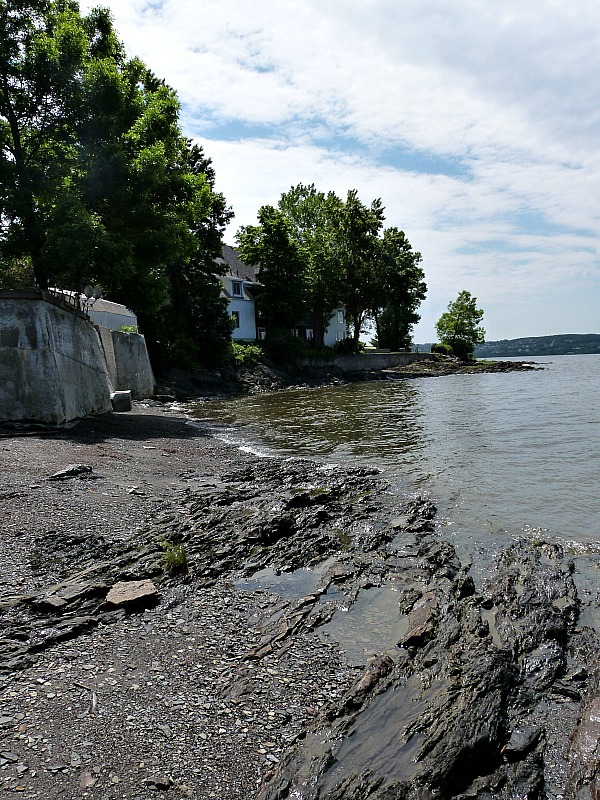 We spent the afternoon back in the Old Town (I could seriously spend days there), walking the fortifications around the city in their entirety and visiting the ruins of a Chateau under the Terrasse Dufferin. We then headed to Saint Jean Baptiste for some authentic Italian gelato and a nice stroll. 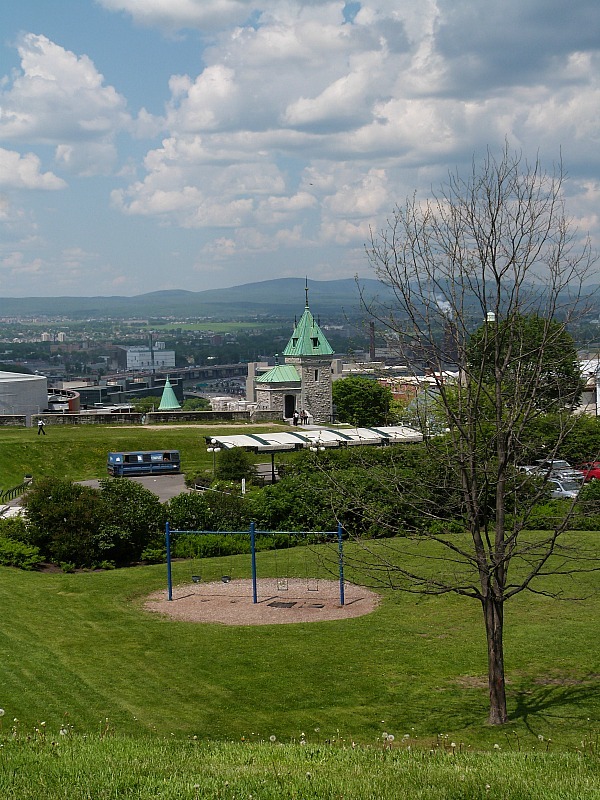 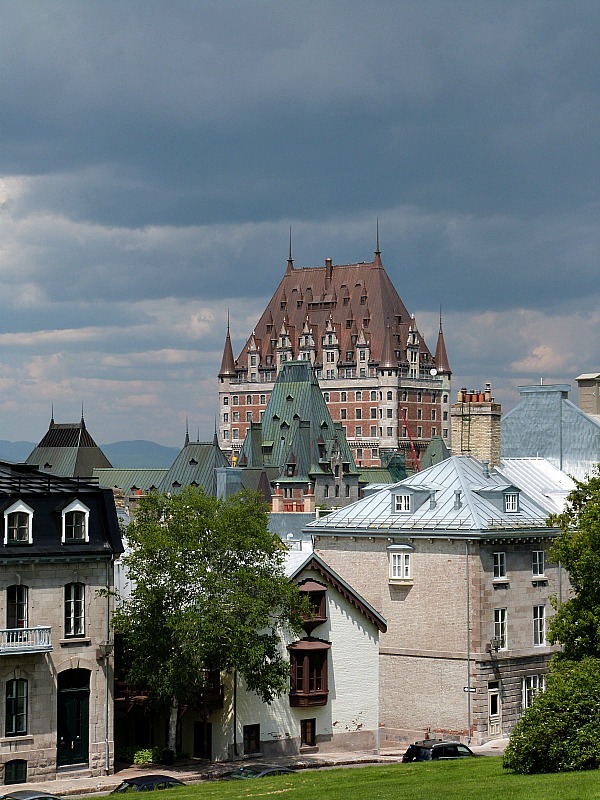 Our last day in Quebec City we had some crazy weather, windy and cold one minute, violent hail the next, then sunny and hot.

We spent some more time in the lower Old Town, trying some free samples of delicious maple products and enjoying the buskers in Place Royale, then went back to Saint Jean Baptiste where they had closed off Rue St Jean to cars for a market day.

There was lots of great live Quebecoise music, such a nice place to while away a sunny afternoon. 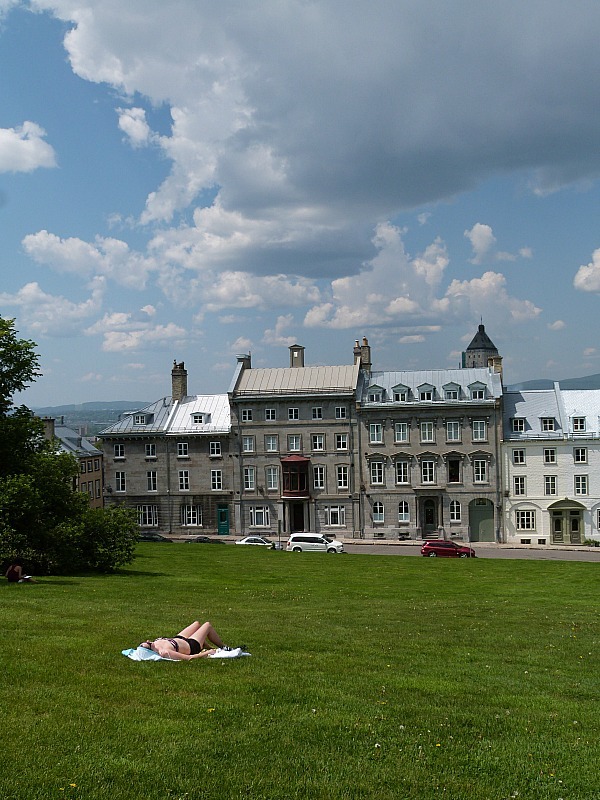 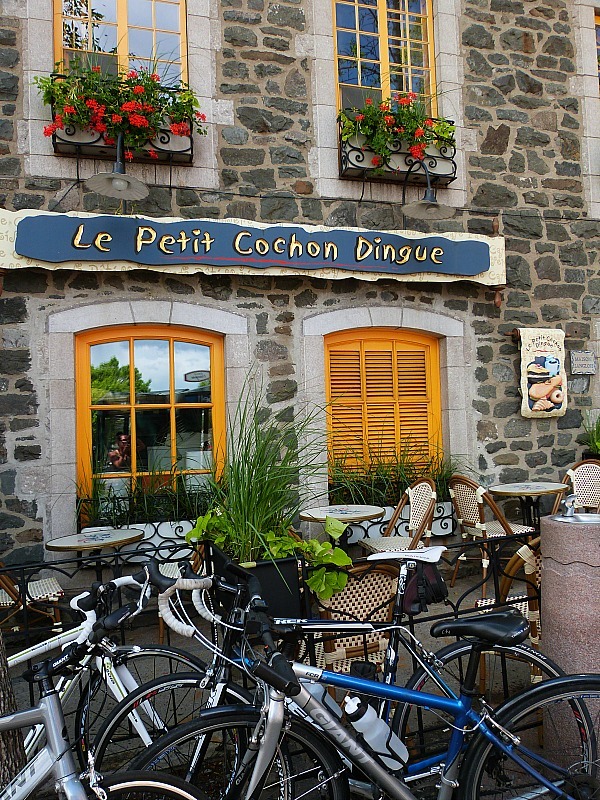 We both really loved our time in Quebec City, it is definitely one of my favourite cities I have visited and it would be a great place to live. 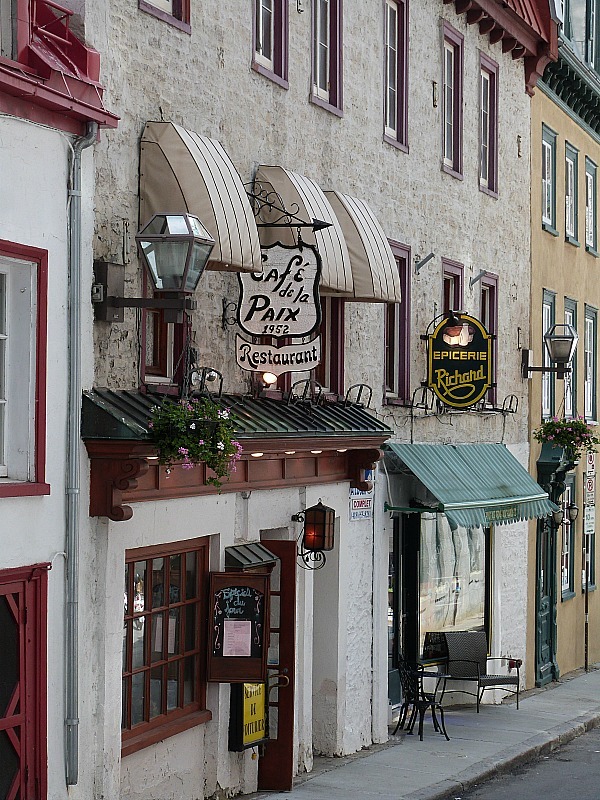 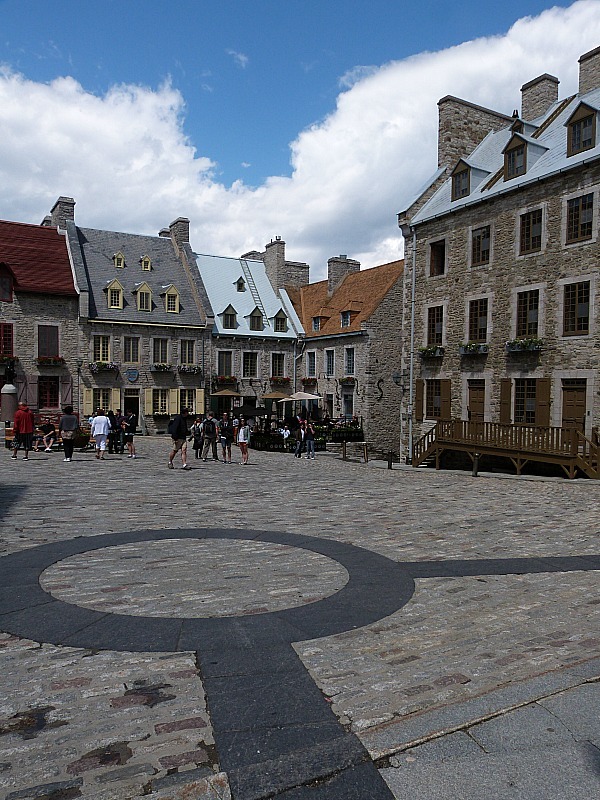 Montreal didn’t capture our imagination as much but we had a great time nonetheless, largely thanks to our great couch surfing hosts.

There is so much more I would like to see in the province of Quebec and we will be heading back this way again in July for another week.

Still on budget and thoroughly enjoying ourselves!