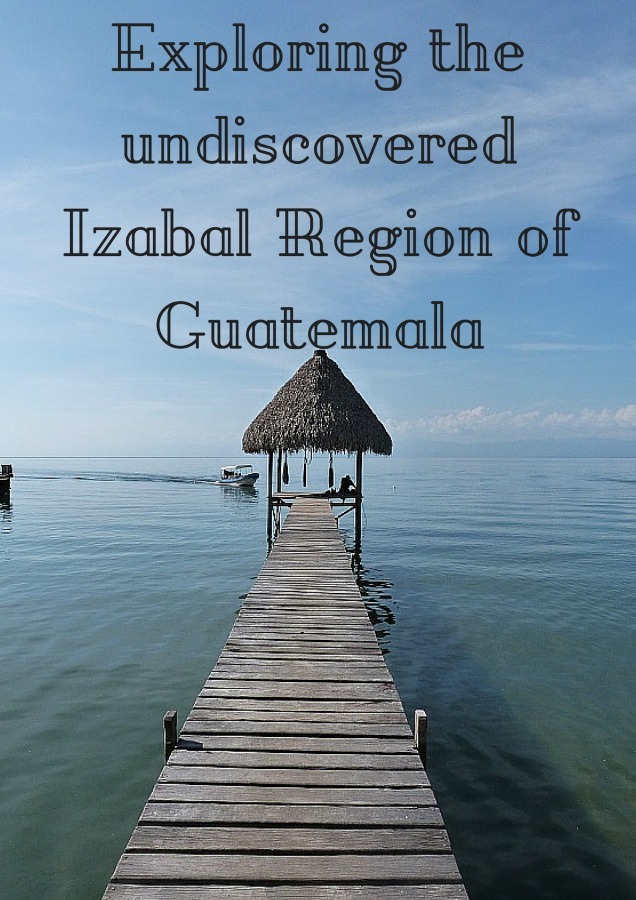 We met up with our friends Lynn and Pete in Rio Dulce, a small but busy town named after the Rio Dulce, a river that runs from Lake Izabal to the Caribbean sea at Livingston.

The Izabal region of Guatemala is densely jungled and very humid, quite a shock after the dry weather and cold nights in the mountains. I arranged with a hotel on the river to have my passport sent there so that was our base for our 2 weeks in the area. 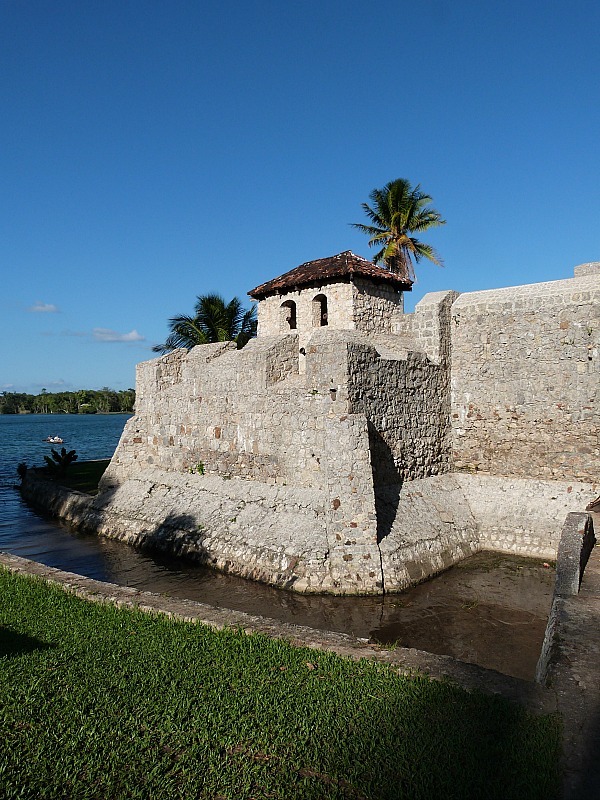 Firstly we spent four nights at the hotel, enjoying the gorgeous river view and cuddling the resident pregnant cat, Desayuna. The Hotel Vista Rio is run by two American Yachties J & J and is frequented by other elderly American Yachties. 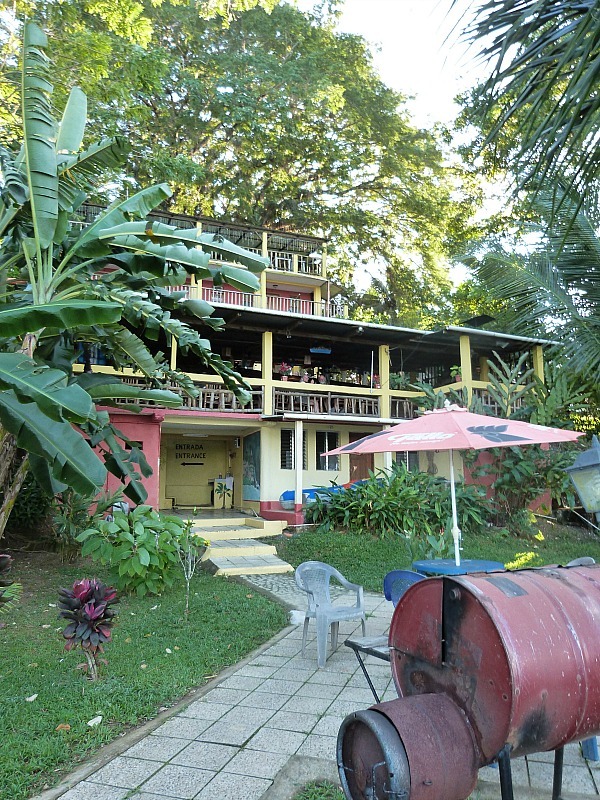 In fact the whole town of Rio Dulce was full of these people who have somehow managed to get stuck there, some for years and some waiting out the storm season to then go out sailing in the Caribbean again.

Because of their presence there, we had a different experience than the rest of our time in Guatemala, we met some real characters and also quite a few weirdos, escaping society by hiding out in a Guatemalan backwater.

There are a couple of sights in the area, we visited a Fort/Castle up river towards the Lake which had a spectacular setting but the most impressive outing was to Finca de Paraiso, an amazing hot waterfall.

You swim in the warm pool beneath the waterfall, have a hot shower under the falls, swim into the small cave behind the falls for a natural sauna and lather yourself in hot mineral mud for smooth skin – a very cheap and natural day spa. 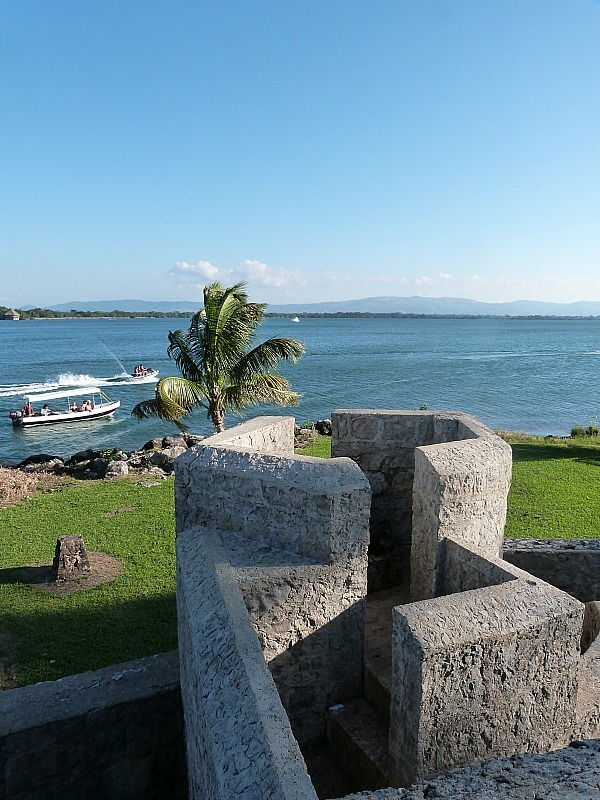 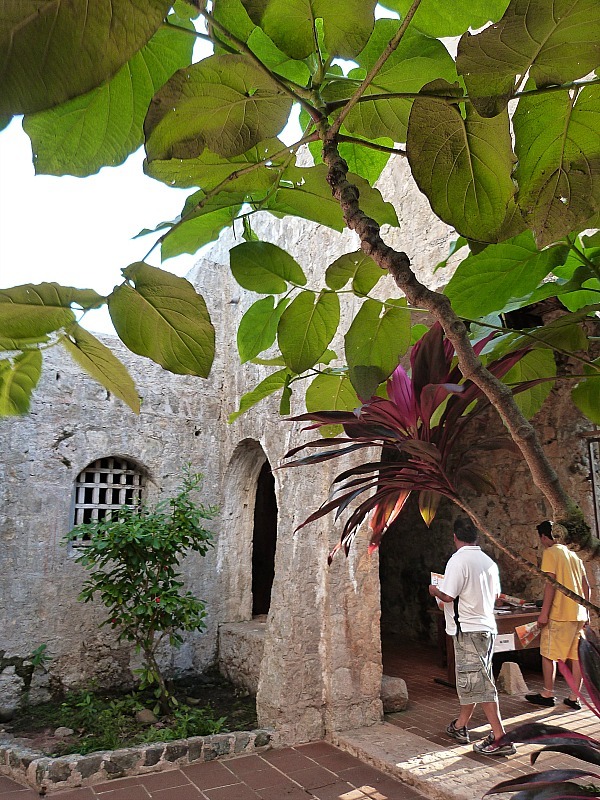 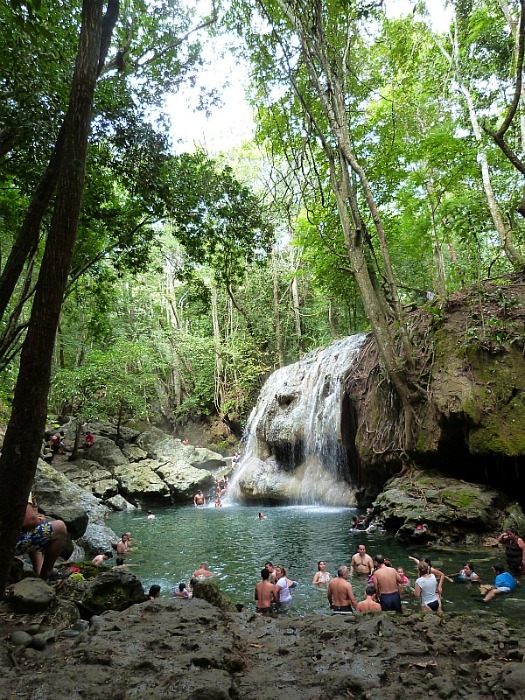 We hitched a ride on the back of a chicken feed truck with some other travellers up the road further to visit a canyon we had been told about by J & J.

It was an interesting experience which included three kids under the age of 10 taking us on a small boat with a hole in it up stream to the canyon and back.

The littlest kid’s job was to use his hand to plug the hole although it didn’t do much good as there was a lot of water in the bottom by the time we got back.

We decided to spend New Years at a remote beach resort called Denny’s Beach, owned by a Canadian guy (Yes his name is Denny). We hired a private lancha to get there, going up the Rio Dulce and across Lake Izabal.

It is a lovely quiet place with a little sandy beach, a restaurant, a motel and not much else. 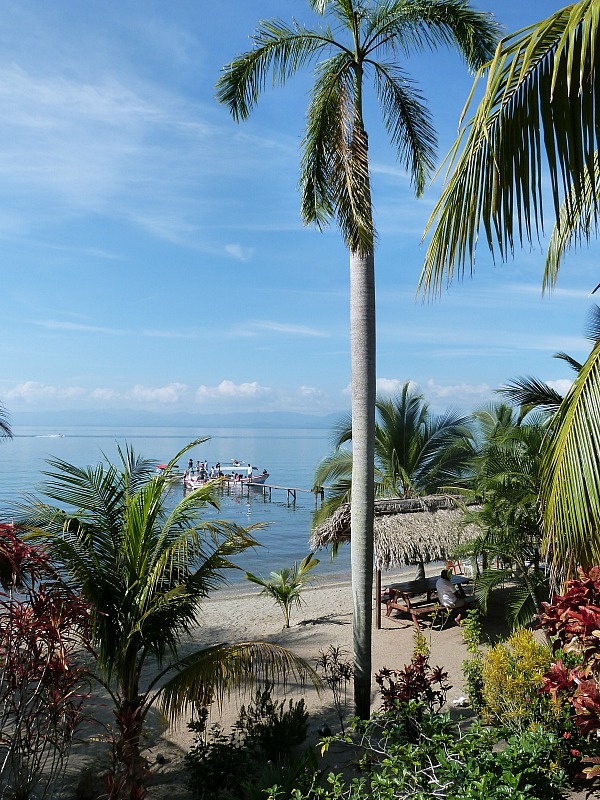 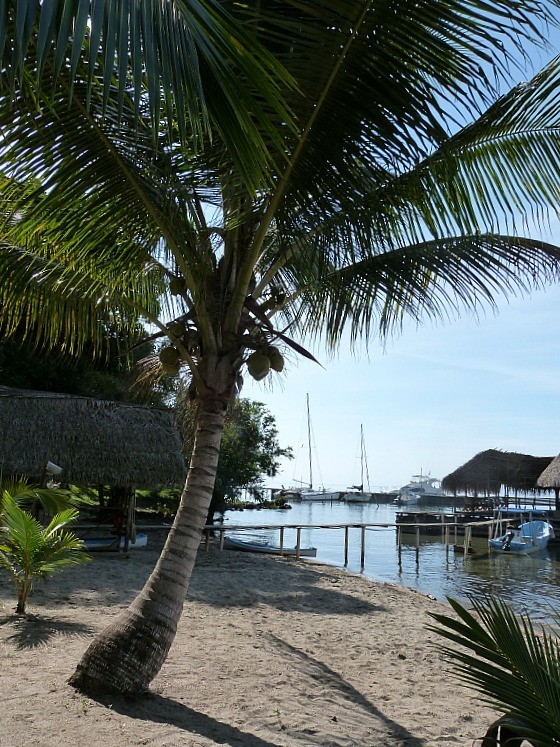 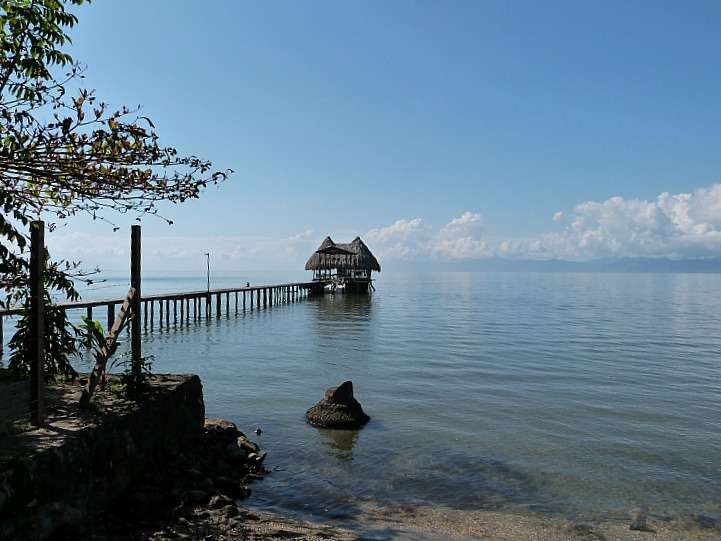 We arrived on New Years Eve and spent it drinking by the beach and watching the fireworks around the lake at midnight.

Trav and Pete fished while Lynn and I relaxed on New Years day, then the second day we decided to do a 4 hour horse riding trip up into the hills behind the lake with a local guy. 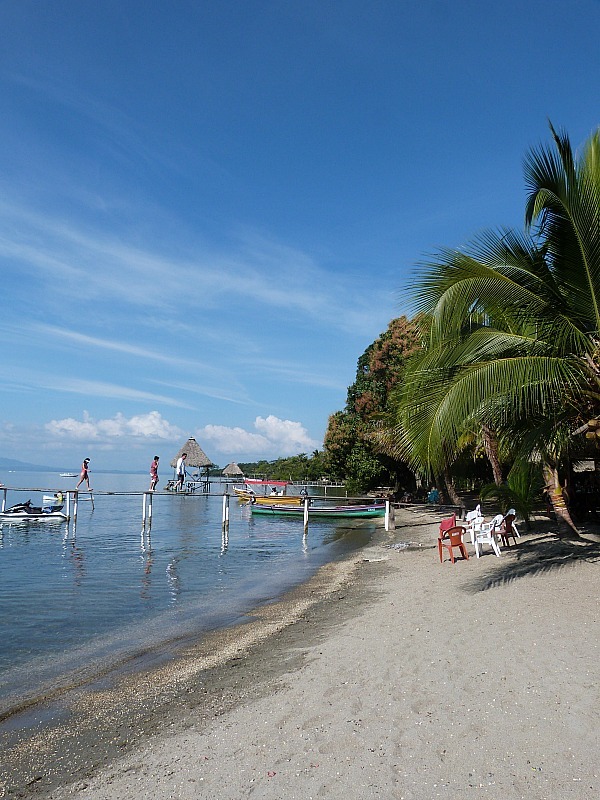 It was the first time in years that I had been on a horse and Trav’s first time ever. The horses were a bit stubborn and parts of the trip were quite punishing for them but we enjoyed it (despite the aches and pains suffered).

My favourite part was riding through the tiny village where the guide lived. There was no road connecting it to anywhere. Chickens gathered on the dusty trail alongside the modest but tidy homes of the handful of residents.

Leaving Denny’s beach, we said goodbye to Pete and Lynn and got numerous collectivos and boats to get to Livingston on the Caribbean Coast. 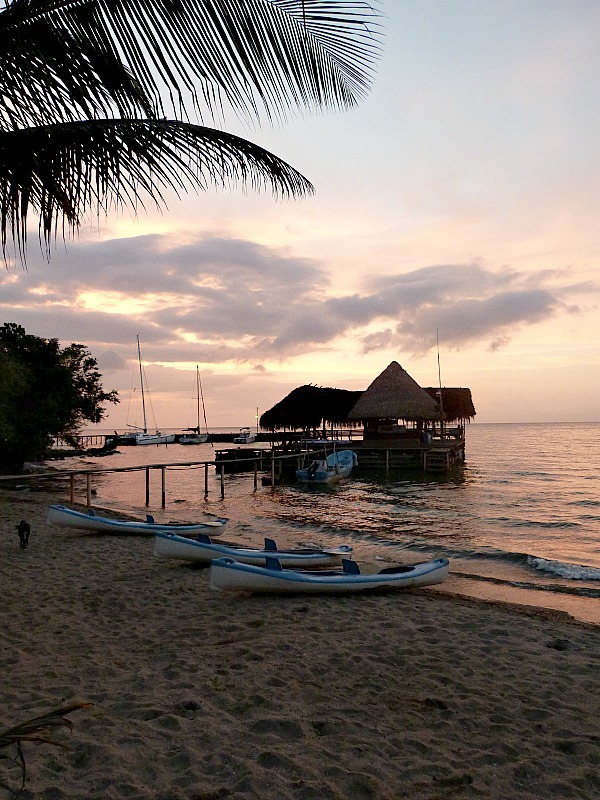 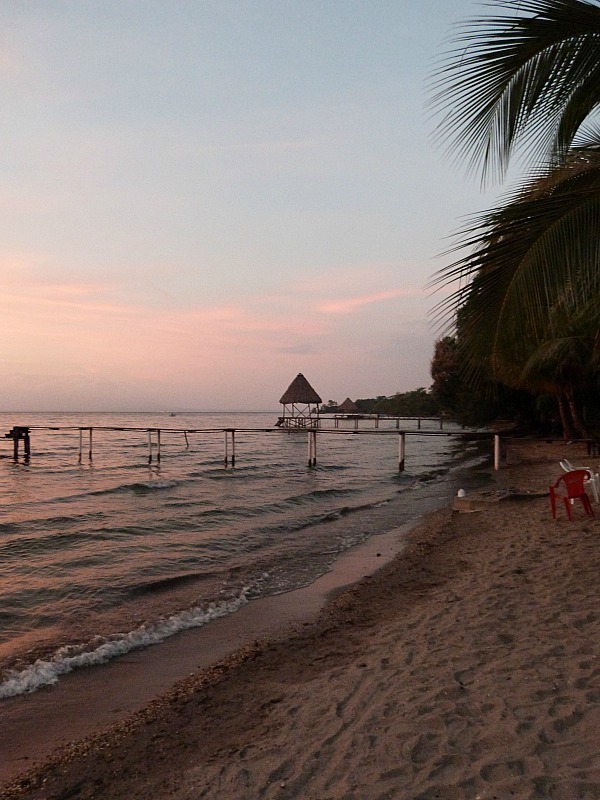 Livingston is a small and isolated town with the only way to get there being by boat. It has a Caribbean laid back flavour to it despite the beaches not looking very ‘Caribbean’.

The beaches around town only have a small, dark strip of sand ringed by palms and the water looks muddy and is very shallow. 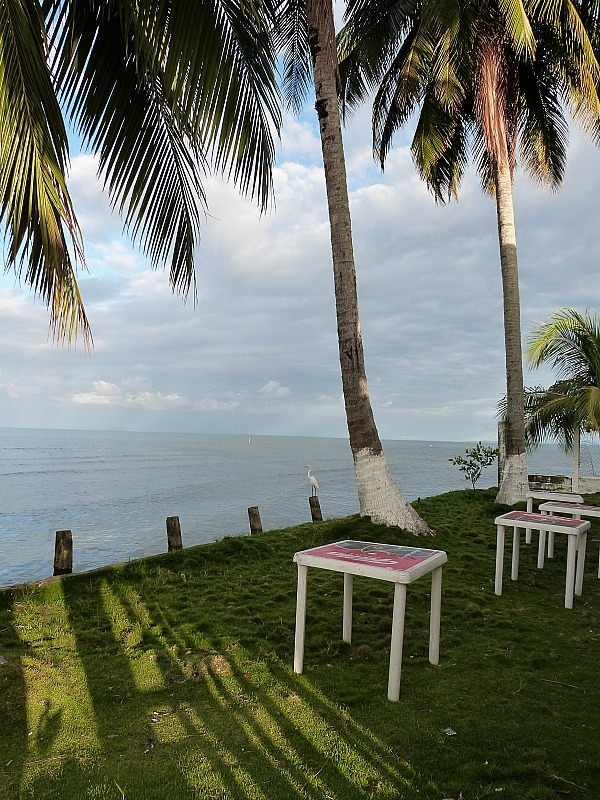 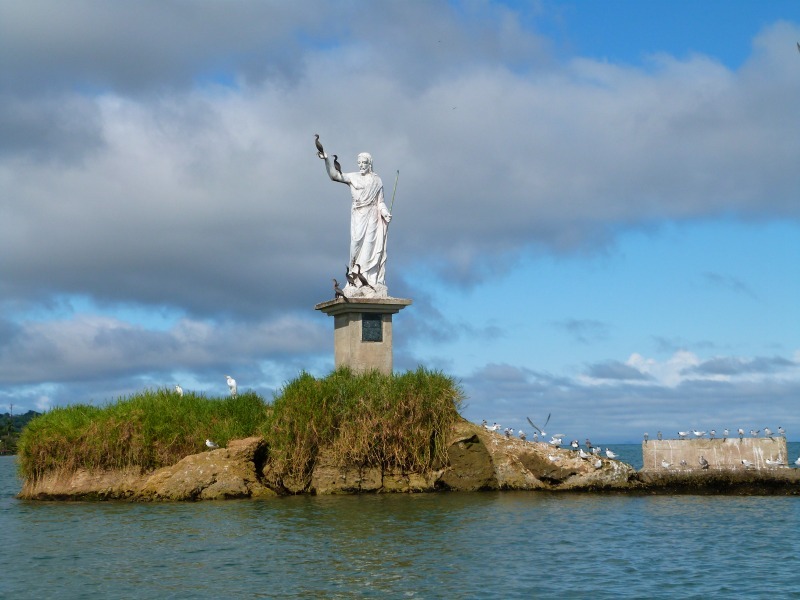 Livingston is an interesting place to visit despite its drab beaches as it is home to the only settlement of the Garifuna in Guatemala. The Garifuna were descended from African slaves thought to have been shipwrecked in the 17th Century on a small Caribbean island.

They then moved to Saint Vincent in the Caribbean and intermarried with the natives there. In 1797 when Saint Vincent came under British rule they were sent to live on Roatan, a Honduran Island.

As Roatan didn’t have enough natural resources to sustain their growing population, they petitioned to be allowed to settle on the mainland and there are now Garifuna populations in Belize, Guatemala, Nicaragua and Honduras.

We enjoyed walking around the town, walking along the beaches, watching the pelicans and fishermen offshore and sampling the seafood. 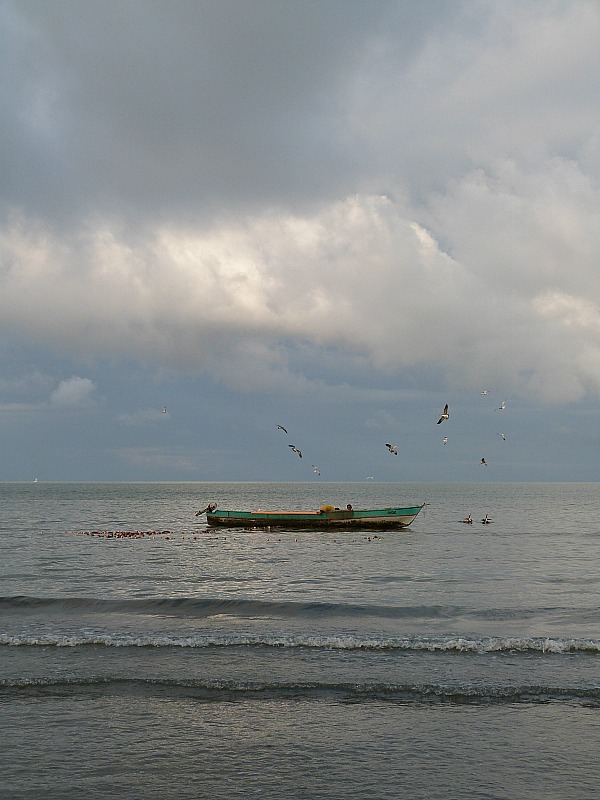 Because of the low standard of beaches in Livingston we did a day trip to a white sand private beach called Playa Blanca which, although beautiful, still had nothing on the Mexican Caribbean.

We also visited a series of waterfalls called Los Sietes Altares which were nice but we weren’t overly impressed. 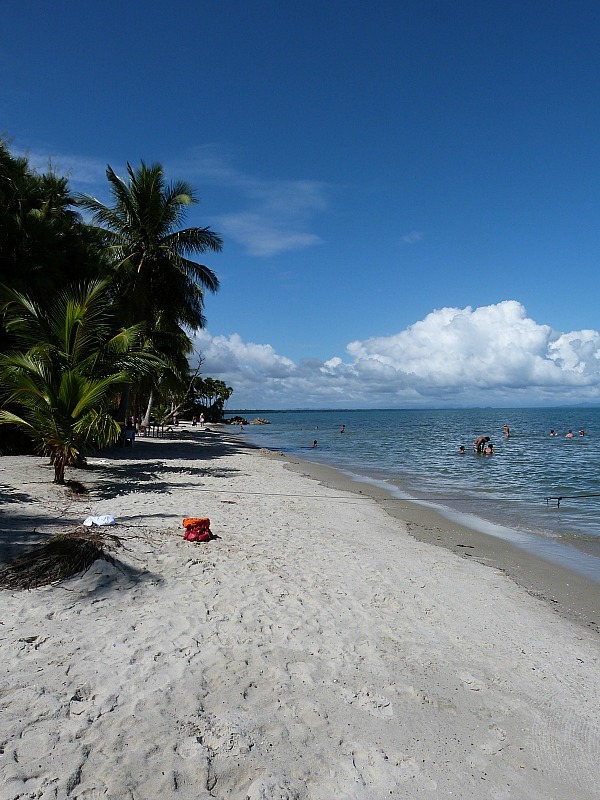 The low point of our three days in Livingston was when Trav was pickpocketed. Luckily there was only cash in his pocket and he can claim it back on his travel insurance so it could have been worse.

To get back to Rio Dulce we caught a collectivo lancha boat down the river. It is meant to be an amazing trip as you go through a canyon, but because of our bad mood due to the pick-pocketing and the rain, we didn’t enjoy it much.

Back in Rio Dulce, Trav got a police report and we had lunch at our favourite Restaurant in town, Sun dog (best Pizza and Vege burgers in Guatemala!) then got picked up by lancha and taken to Hotel Kangaroo, a remote river Lodge that can only be reached by boat. 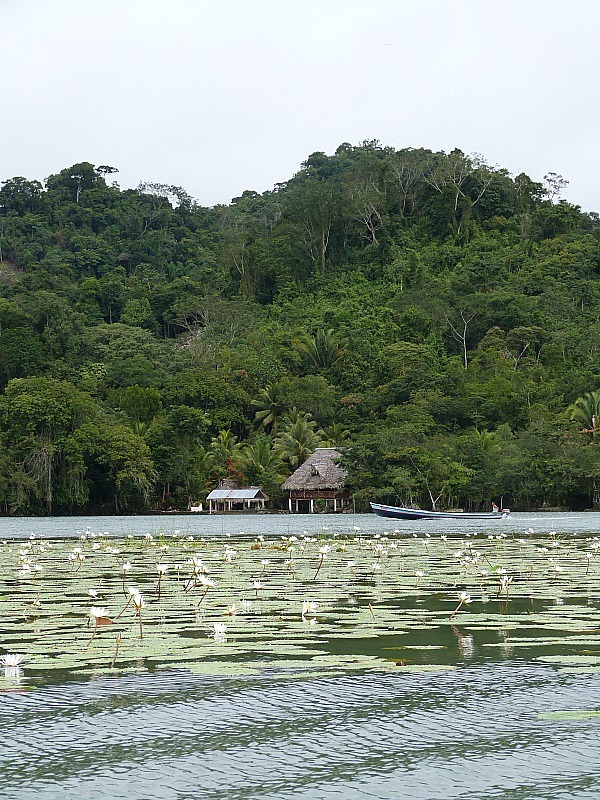 The Hotel Kangaroo is a beautiful wooden lodge, the kind of place that looks like it might be expensive to stay at with handmade wooden furniture and lots of cozy lounge areas to relax in.

Luckily for us it was very affordable, even more so because we didn’t venture out to do any activities the whole time we were there.

We spent three days relaxing; watching movies and reading our books while the rain poured down outside. 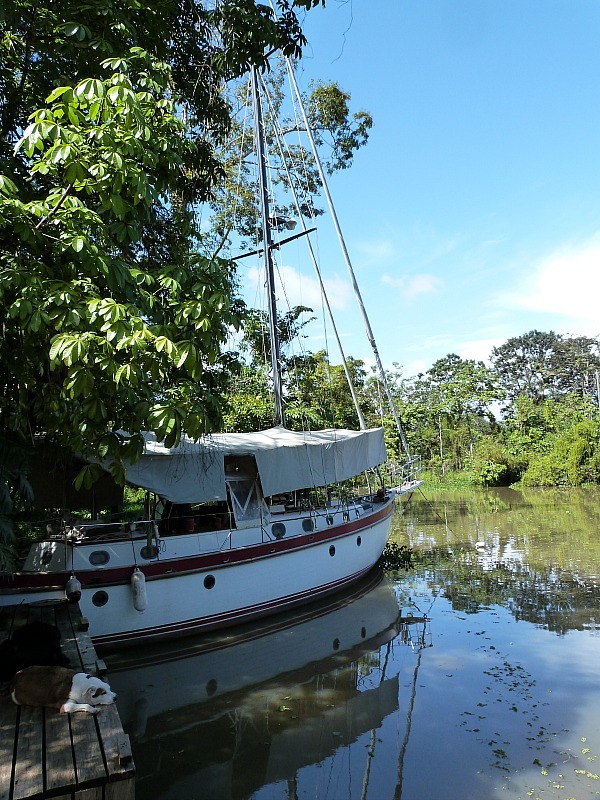 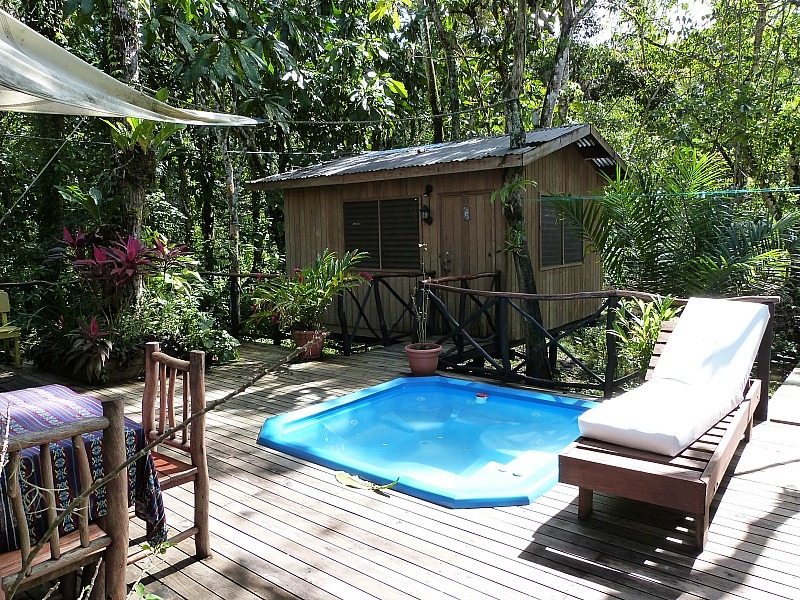 Our last two days in Guatemala we spent back at Vista Rio until finally my passport arrived after three weeks of waiting – It was a magical moment, I can tell you!

We said goodbye to Desayuna and wished her well with her impending motherhood then got on a bus to the most dangerous city in the world for gun crime – San Pedro Sula, Honduras.

I really enjoyed the Izabal region but I was dying to move on in the end. I think if you are trapped anywhere, even if it is a paradise, you start to get itchy feet after a while.

2 Comments on Exploring the Undiscovered Izabal Region of Guatemala