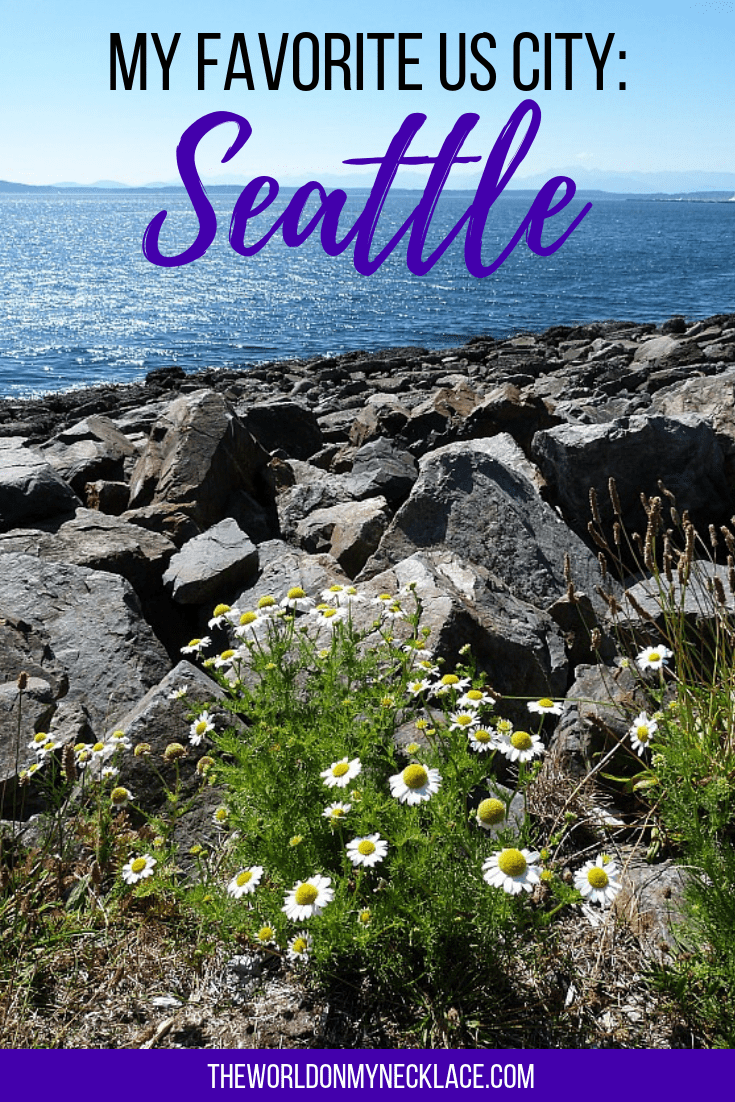 I hadn’t planned on visiting Seattle again so soon.

I have visited Seattle twice before. The first time was for only two nights back in 2010 when I was traveling with my Dad. We only saw the downtown and while I enjoyed visiting Pike Place Market and eating at the Crab Pot, I didn’t love the city.

I thought the waterfront was underutilized, especially compared to downtown Vancouver with its miles of biking and walking trails, parkland, and beaches right in the city.

Seattle fell short of the mark in my opinion.

My second visit to Seattle was when Trav and I couch surfed in North Seattle for four nights during our 13 month Americas trip two years ago. This time I got the chance to visit some of the neighborhoods surrounding the city.

We sampled brilliant coffee at local cafes, browsed markets, and wandered waterside parks. I really liked Seattle on this visit but I still thought that it didn’t hold a candle to my beloved Vancouver.

I wasn’t really that fussed about visiting again.

But fate (and cheap air taxes) worked to get me back to Seattle for the third time. When I was looking at the cheapest way to get from Sydney to Vancouver I realized that the most cost-effective use of my air miles was to fly into Seattle from Honolulu, where I could then take a Greyhound bus the five hours up to Vancouver.

It would be a bit of a pain but would save me a couple of hundred dollars so I booked it. I decided to spend a couple of nights in Seattle to break up the journey and I was lucky enough to be able to couch surf with the same host from my 2013 trip again, Sam.

Sam was living in Greenwood in Northern Seattle the first time but has since moved with his girlfriend Lindsay to Green Lake, a suburb of Seattle I hadn’t visited before. Green Lake is also in northern Seattle and is named for the large suburban lake that makes up a big part of the neighborhood.

From the airport, I took the bus up to Green Lake. On the way, I passed leafy neighborhoods and colorful wooden houses. The air was fresh and pine-scented. So many trees. It felt great to be back in the Pacific North West.

After dropping my bags at Sam and Lindsay’s beautiful apartment, Sam and I caught up with a hot drink and a walk around Green Lake. The sun was out and there were loads of smiling people walking their dogs, jogging, and enjoying the unusually warm weather. 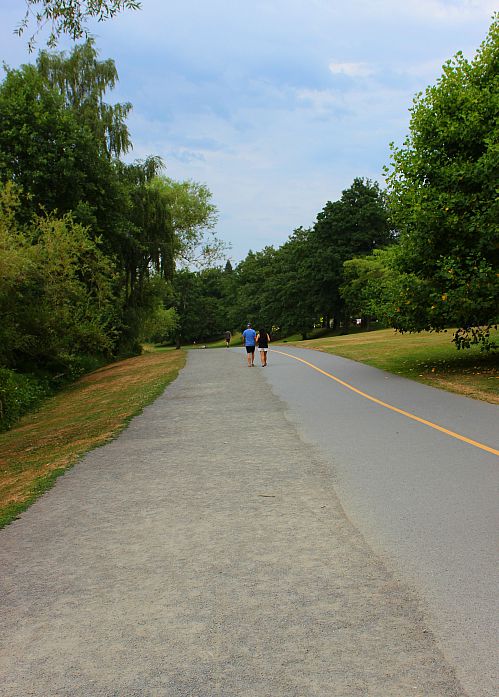 Green Lake was a gorgeous sight, shimmering in the bright morning sunshine. I hadn’t slept on the plane but I was feeling good. Seattle was beginning to work it’s charms on me.

Back at the apartment, I met Lindsay for the first time and we instantly hit it off. What an awesome girl! Both Sam and Lindsay weren’t working so they suggested we go to Greenwood where there was a vintage car show on. I didn’t have any plans so off we went.

First stop was for lunch at a wing place in Greenwood where the staff knew Sam and Lindsay by name. We had a couple of beers with our wings and although I’m not the best day drinker, I was having fun.

Vintage cars lined the main street in Greenwood which was closed for traffic. There were some pretty cool vehicles with my favorite being an ambulance station wagon from the 1970s with its original interior. 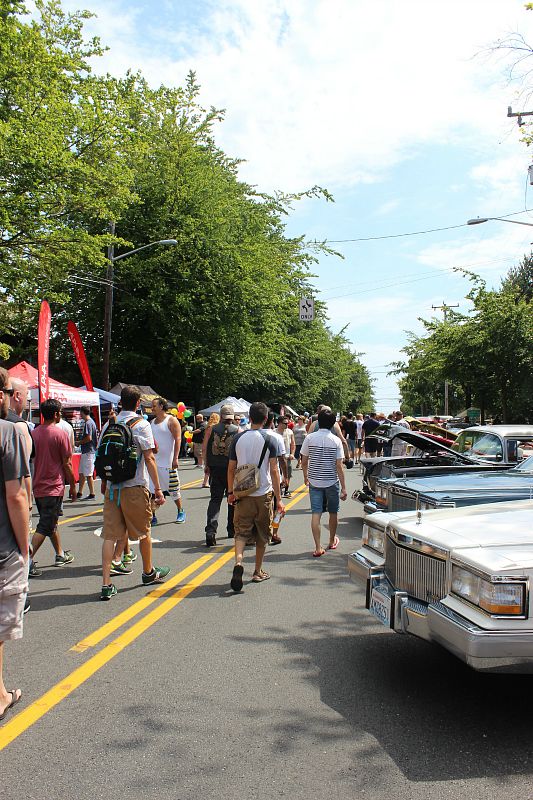 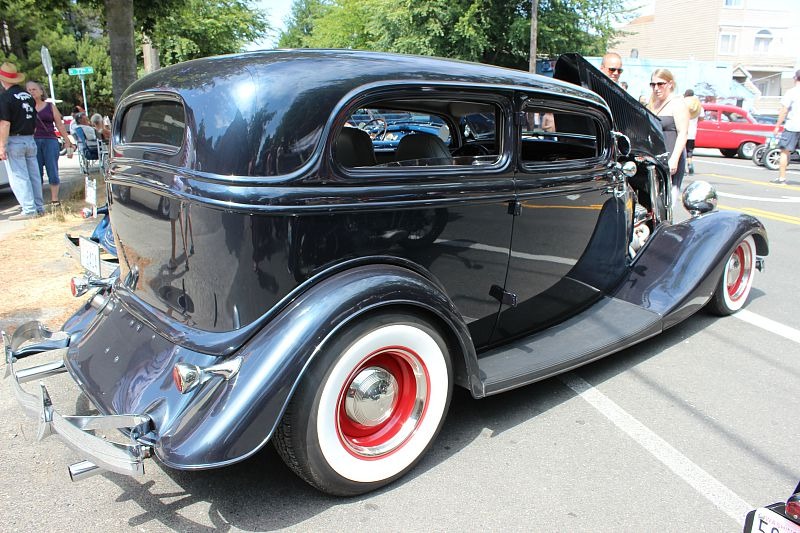 The day was a scorcher. The Pacific North West has been in the grip of a heat wave for a few weeks now and it felt like I was on the humid East Coast rather than the usually temperate West.

We stopped by a busy dive bar for another drink then met Sam and Lindsay’s friend Chris at the Iron Bull Bar in Wallingford. From there it gets hazy but what I do remember was how much fun I was having and what awesome people Sam, Lindsay, and Chris are. It isn’t too often when you meet people that you instantly connect with. 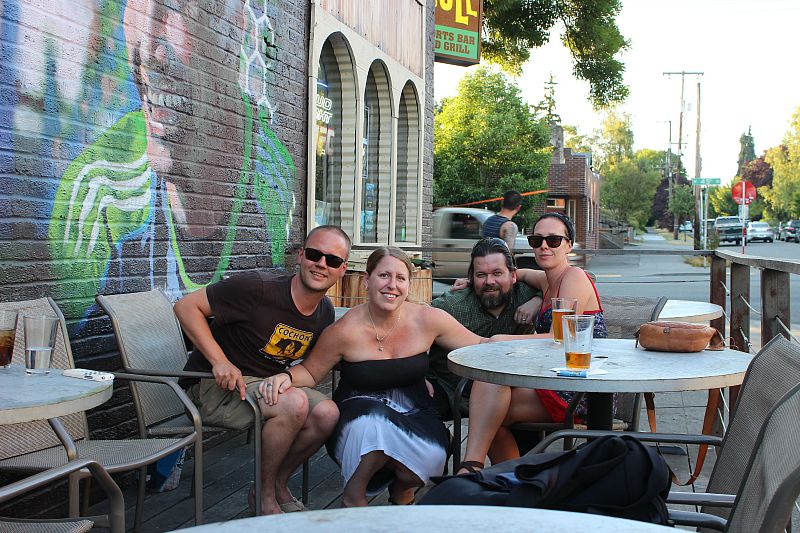 It wasn’t my usual idea of a fun day out. I am generally not that bothered by cars, I don’t really like wings that much and I don’t like drinking in the day. But it ended up being my favorite day of my trip so far. It all came down to the company.

I woke up with one hell of a hangover but it was worth it.

I only had two days in Seattle so despite the hangover I made sure to get out and explore on my second day. There was no time to waste.

It was Sunday and the Fremont Market was on so Fremont, my favorite suburb of Seattle, was my first stop of the day. I really enjoyed browsing the stalls and eating at the food trucks last time I was in Seattle with Trav and it was just as good this time around.

With so many wonderful stalls I couldn’t resist buying something and I settled for a printed Emerald City singlet. If it was the end of my trip rather than the beginning I would have bought a lot more as there were so many gorgeous handmade necklaces, clothing, vintage maps, fresh produce and everything else you can imagine. 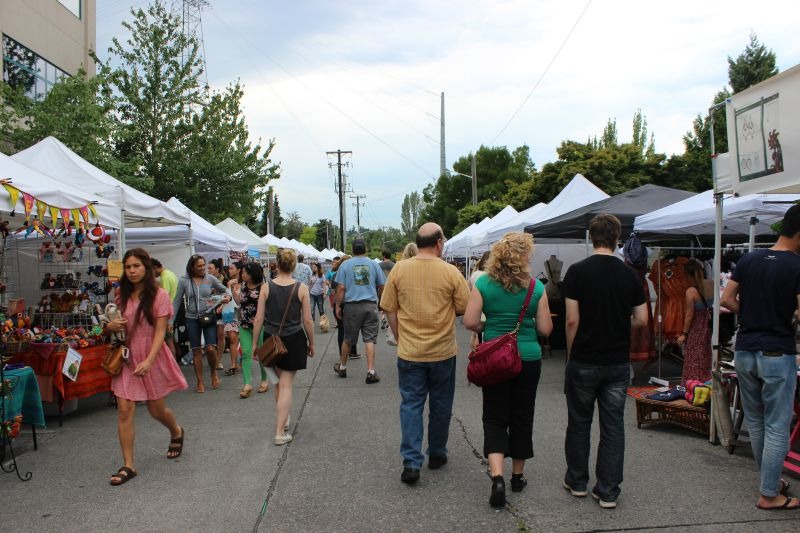 I ate a falafel pita from one of the food stalls then caught the bus to Ballard. Ballard started out as a Norwegian fishing village when it was first settled over 150 years ago but now it is a hipster enclave filled with great eateries and bars.

The Ballard Locks are a popular stop to picnic in the gardens and watch boats passing between Puget Sound and Lake Washington. There is also a fish ladder where you can view salmon making their way upstream from underwater viewing windows.

Discovery Park is a thirty-minute walk through a quiet suburban neighborhood from there. Last time around I didn’t know about Discovery Park but after seeing pictures of the lighthouse and beach online, I knew I had to visit this time around to hike.

Discovery Park proved to be hard to get into. I was following the fence line for quite a while, concerned that I was going the wrong way. I couldn’t see any signposts and was starting to think that maybe I should turn back when I came across the entrance.

Once in Discovery Park there was an information board and free maps with marked trails. I decided to walk the loop trail part of the way around then break off to visit the lighthouse and beach.

Entering the cool forest carpeted with fallen logs and pine needles, I instantly felt calm and relaxed. The nature in this part of the world has a way of doing that to me. The forests feel ancient and mystical. 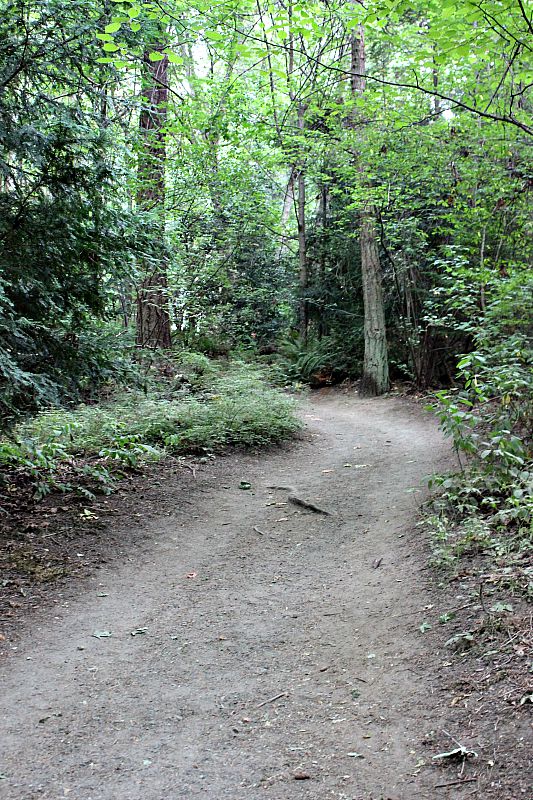 The path wound through the woods then out into an open corridor between the trees. Brightly colored wildflowers grew amongst the overgrown grass edging the pathway. 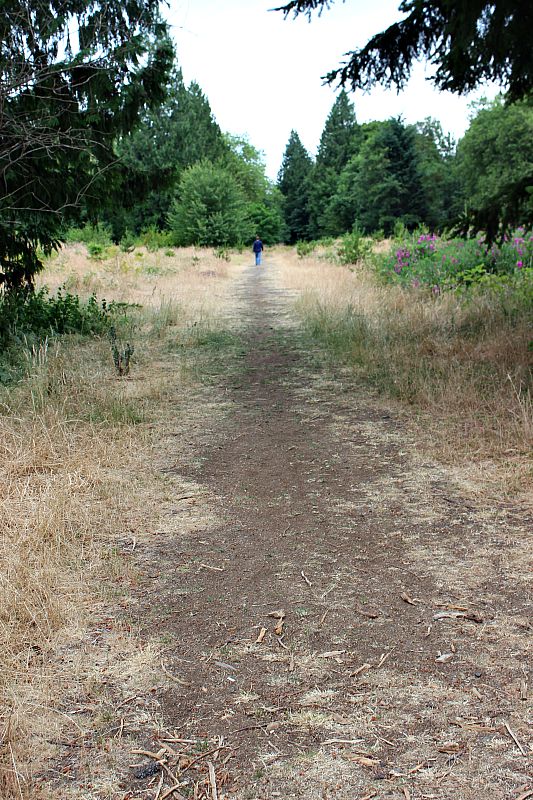 With a lack of signage, I wasn’t sure if I was on the right track but I just kept walking, hoping for the best. After thirty minutes I ended up back at the entrance of the park. I must have taken a wrong turn and looped back around on myself. My map reading skills could definitely do with some work.

It was getting late so I started to head back. Even though I didn’t make it to the beach or lighthouse it was a beautiful walk. And there is always next time, and I definitely want to add some other hikes near Seattle to my itinerary next visit too.

On the way back I found a big patch of wild raspberry bushes with lots of ripe red and black berries. A delicious consolation prize. 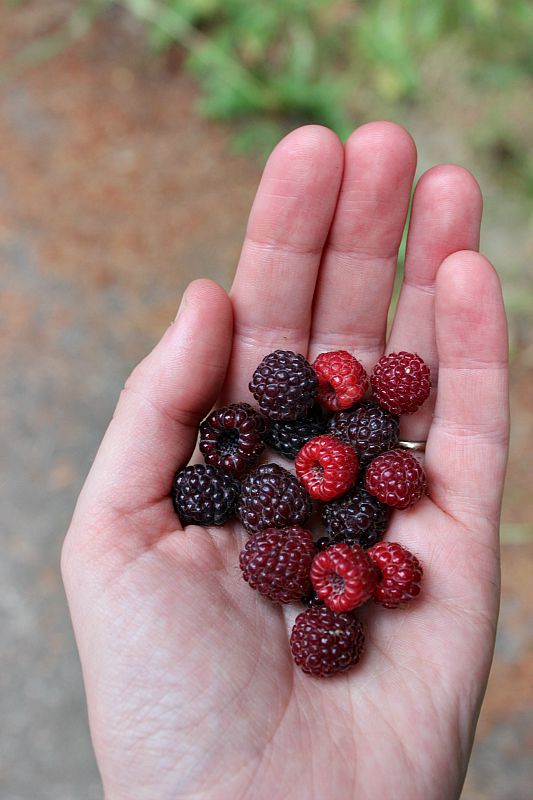 Back in Fremont I treated myself to Pho Ga for dinner from an inconspicuous Vietnamese Restaurant. There are so many dining options in Fremont but I can never resist good Pho. And it was very good.

With room for dessert I stopped off at Phinney Ridge to grab dessert at A La Mode Pies. Their marionberry and hazelnut pie was incredible and definitely worth the detour. 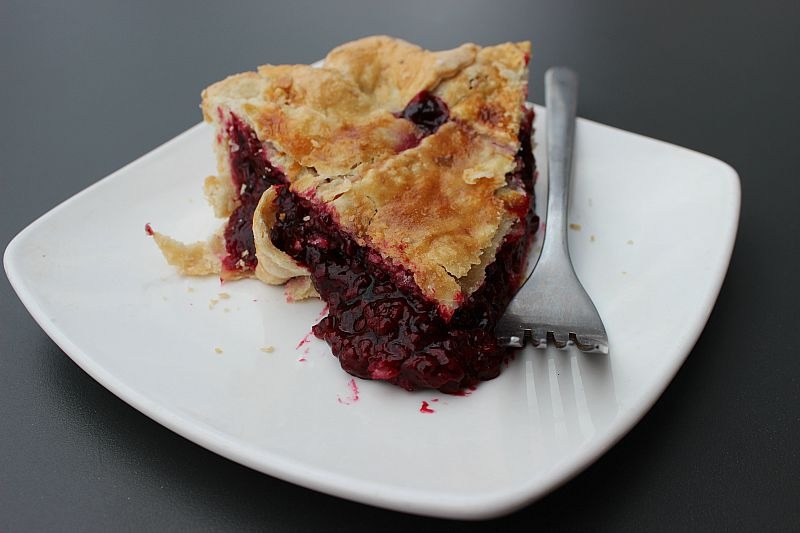 Full of pho and pie, I walked back to the apartment through Woodland Park where music from an outdoor concert drifted out into the evening sky.

I fed Canada Geese with my leftover pita from lunch at Green Lake and I thought about everything I had experienced in Seattle this time around. 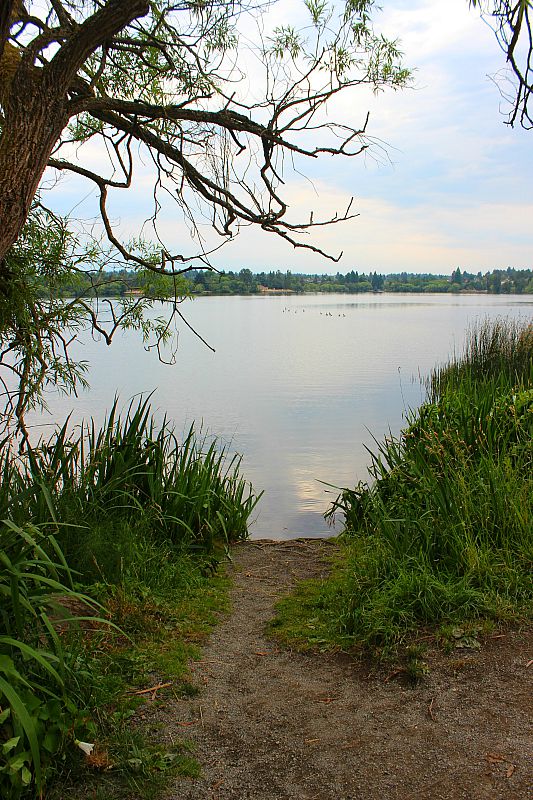 One of big things I noticed this time was the goodness of people here. On three separate occasions I encountered people helping out the homeless community of Seattle. A couple of ladies gave money to a homeless lady which was nice but they were also so warm and engaging, treating her like a friend.

I saw a family taking a plate of food down to a homeless man in a park and a man on his bike stopped to give change to another man that was hanging around the bus stop to buy a bus ticket – he wasn’t even asked. It gave me the warm fuzzies.

I realized that I finally got why people love this city so much and I had stopped comparing it to Vancouver. Although they have their similarities, they are different. They are both wonderful for different reasons.

I will be back in Seattle again to visit Sam and Lindsay and to explore more of the city in September for a couple of days. I am already looking forward to it.

I felt an affinity with Seattle this time around that I didn’t during previous visits. We had finally clicked. I may have only spent two nights in Seattle but by the time I left I had fallen in love with the Emerald City. Finally.

I guess third time’s the charm.

Have you been to Seattle? Would you visit again? 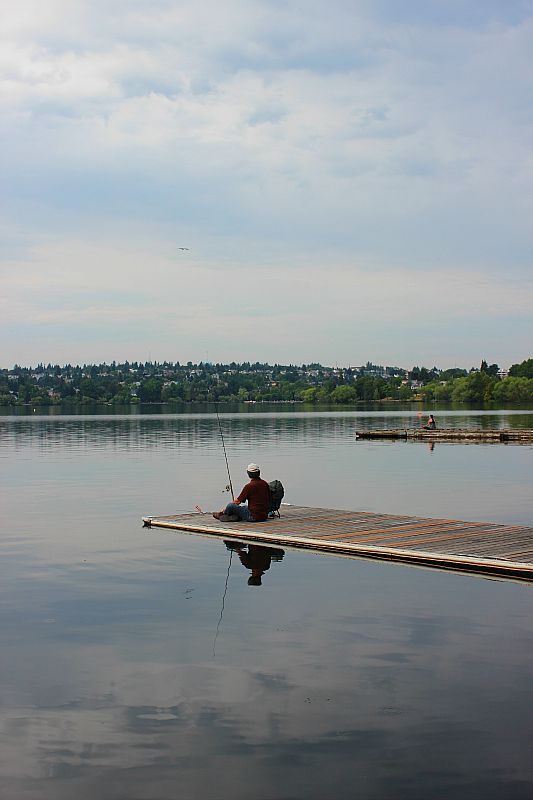 6 Comments on Finally Falling for Seattle