Australia, Islands of the World 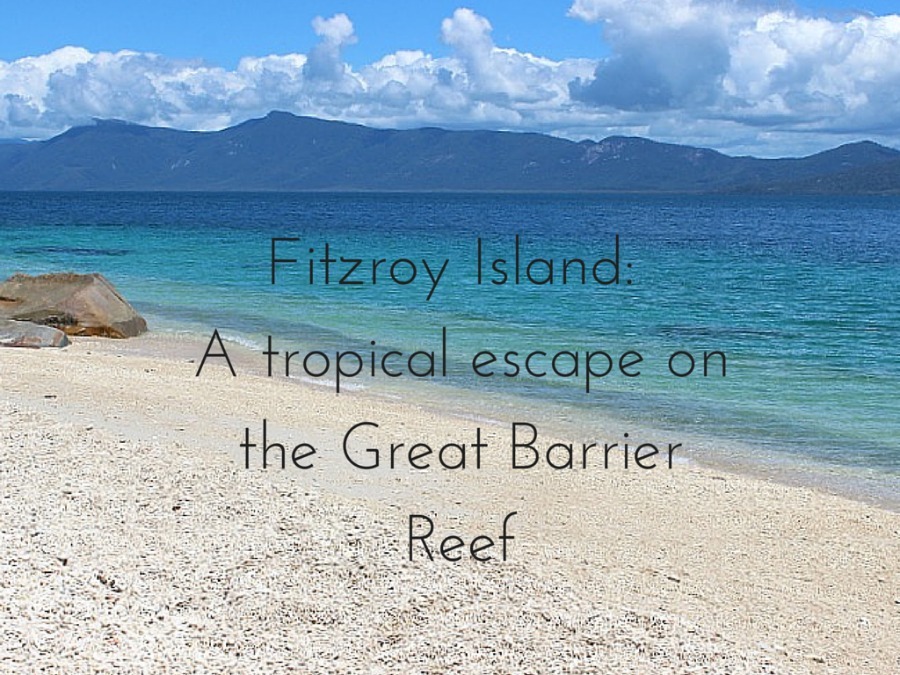 It was hard choosing an island to visit during our short four day stay in tropical North Queensland. Really hard.

On one hand there was Green Island, a sand island with white sand beaches and offshore snorkeling. Then there was the larger, mountainous Fitzroy Island with its rainforest walking trails and budget friendly resort.

They both have beaches although Fitzroy Island has coral beaches and Green Island has sand.

I love beaches and Green Island’s sounded better but the island is quite small. I also love hiking wherever I go and Fitzroy Island was perfect for that. I ummed and ahhed for a while then decided to go for Fitzroy Island after reading a lot of reviews on TripAdvisor and because of the hiking.

I am SO glad we chose Fitzroy Island. 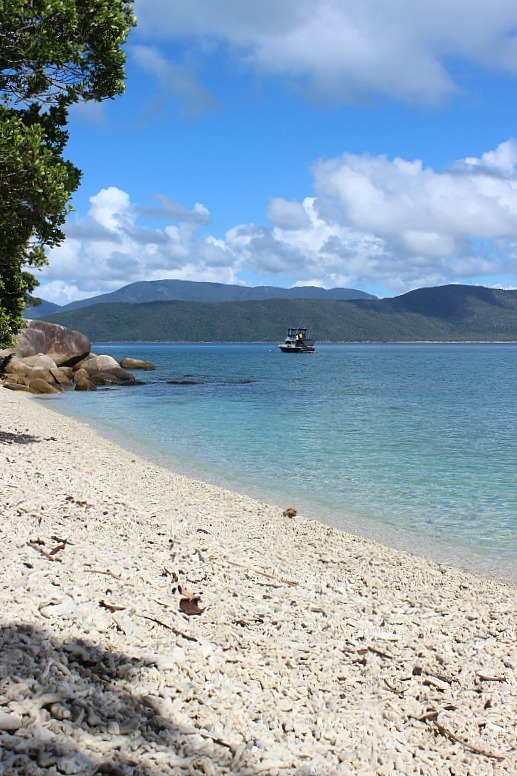 We never would have been able to afford to stay on Green Island as the resort is a pricey one and after talking to a few locals about it during our trip, it turns out Green Island is completely overrun with day-trippers, of which we also would have been.

On such a small island it would have been impossible to escape the crowds. We were also told that the reef around the island has massively degraded due to the large number of people that visit it daily.

I’m sure it’s still very pretty but I am not a big fan of crowds so I don’t think it would have been the island for us.

Fitzroy Island gets day-trippers too but not to the extent that Green Island does and if you stay overnight like we did, you can experience it in a different way.

Wanting to make the most of our time on Fitzroy Island, we booked on the first transfer of the day at 8am which meant another early wakeup call.

Only 45 minutes away by fast catamaran, Fitzroy Island felt worlds away from the crowds of the Cairns Esplanade. The island rose above us in its jungled glory and the murky waters of the harbor lightened in color and clarity as we zipped closer to our destination.

Disembarking from the ferry it felt like we were back in Fiji. Crystal clear water and impossibly lush tropical jungle welcomed us to our island home for the next 40 hours.

Schools of colorful fish swam close to the surface as we walked along the wooden pier. A stretch of white coral beach spread to the left and right of us with only a handful of people refreshing themselves in the calm waters. 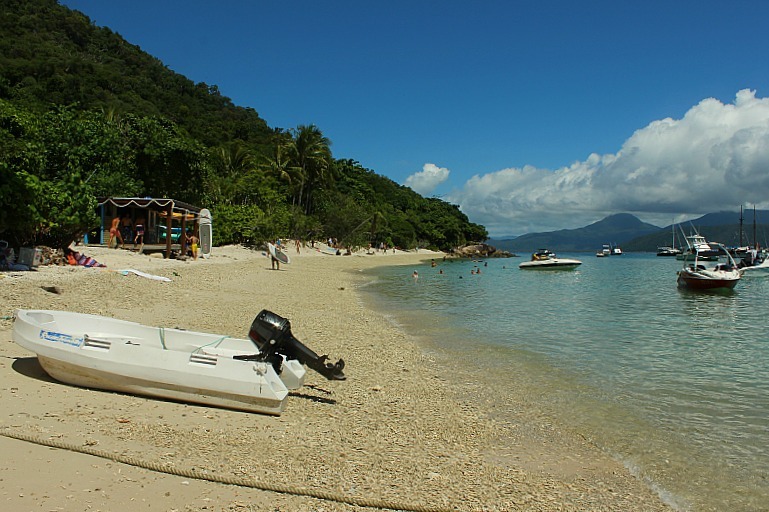 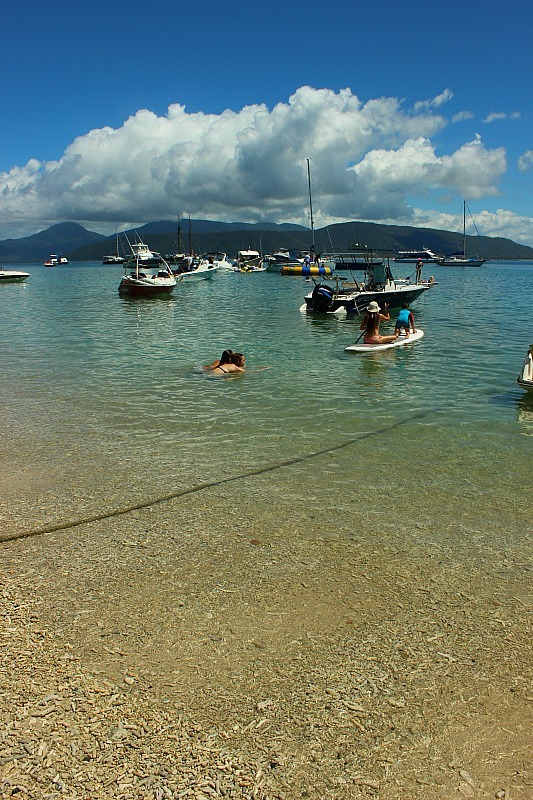 After rushing around for the couple of days previously it finally felt like I was on holiday.

We don’t stay in hotels all that often as we like to travel as much as possible and that involves doing it on a budget. When I do stay in hotels, I appreciate every second of luxury.

As soon as we stepped into the open reception area at the excellent Fitzroy Island Resort I started buzzing with excitement. Next to the reception was the stunning pool with swim up bar, surrounded by palm trees and overlooking the beach. 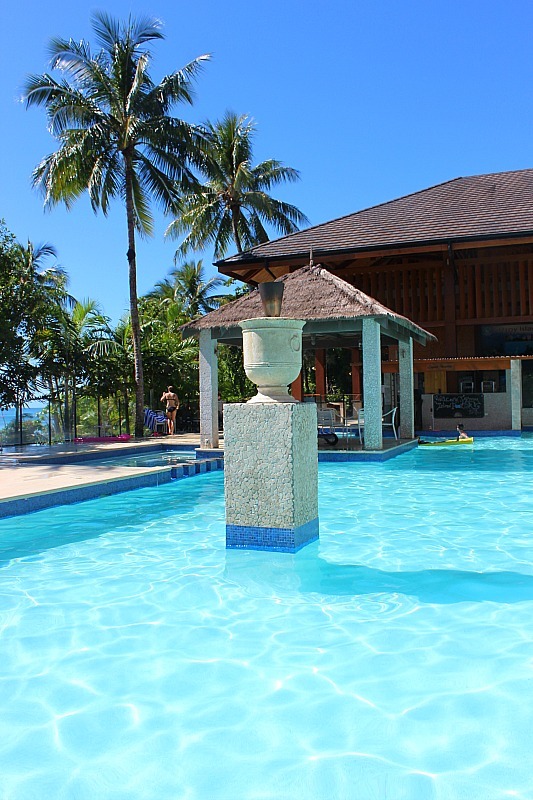 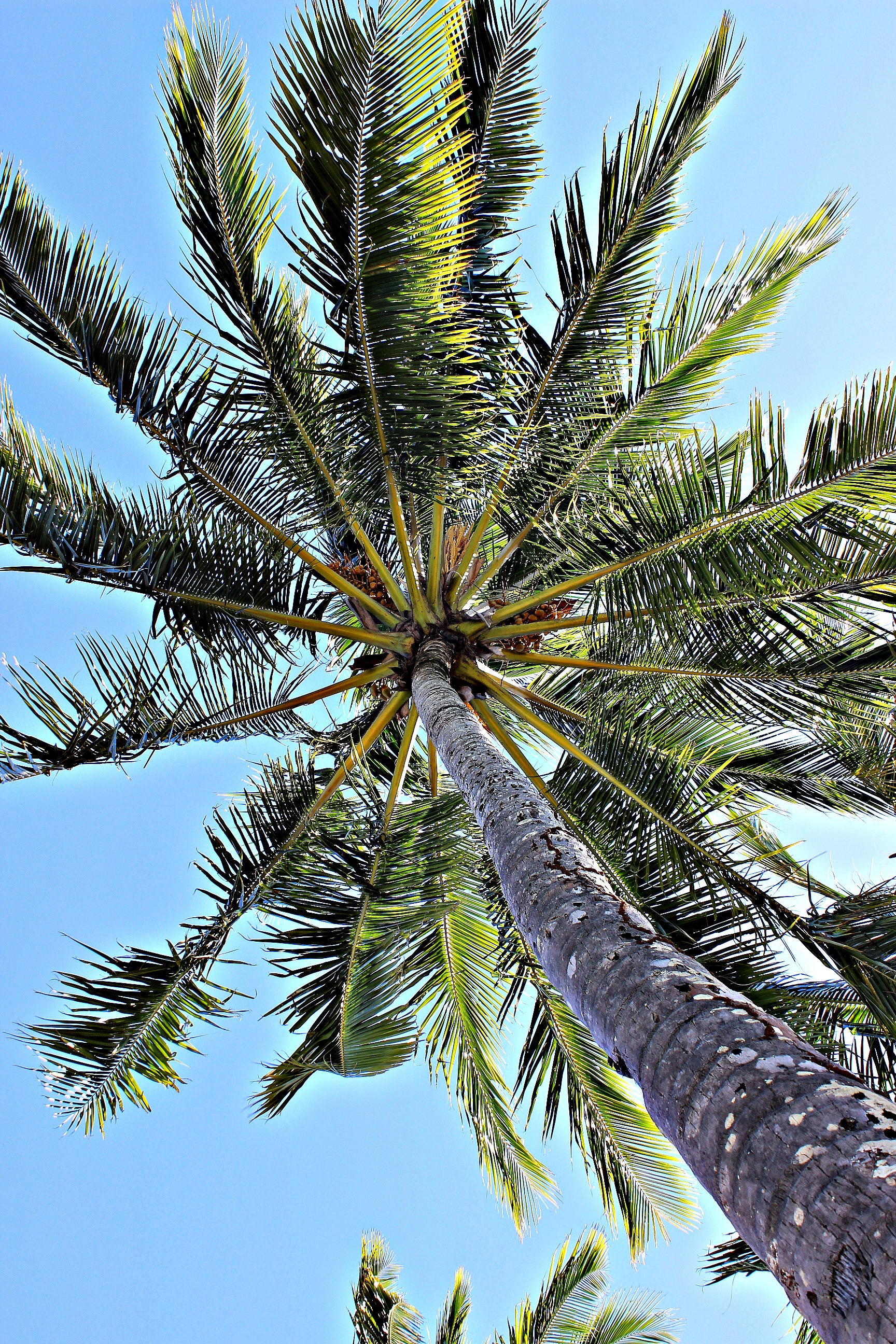 Walking through the park-like grounds was a serene experience. Everything was so green and glossy. The design of the Fitzroy Island Resort was very open and airy, reminding me that nature was all around. 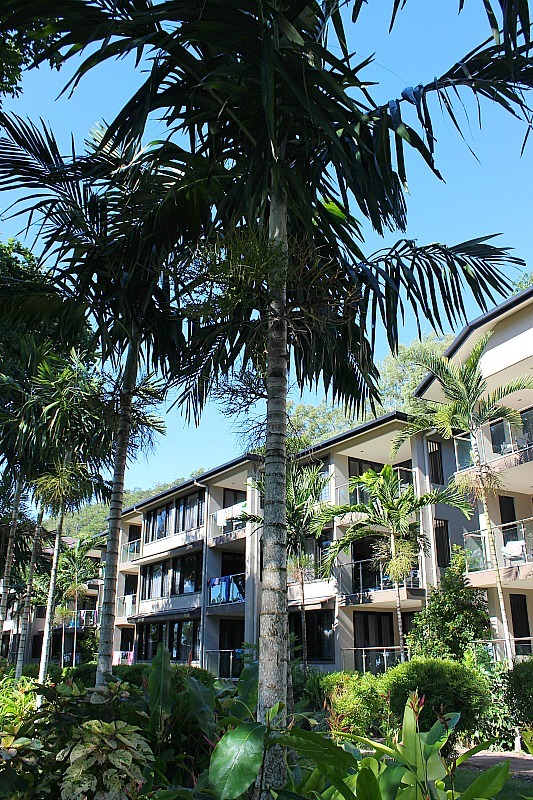 My jaw dropped when I opened the door to our room. I hadn’t been told we were being upgraded so I was expecting a lovely but small resort studio but we were upgraded to a fully self-contained ocean suite. It was just so BIG!

We made sure to check with reception that we were in the right room before fully making ourselves at home. I don’t think I have ever been upgraded for anything in my life so it was such a nice surprise. 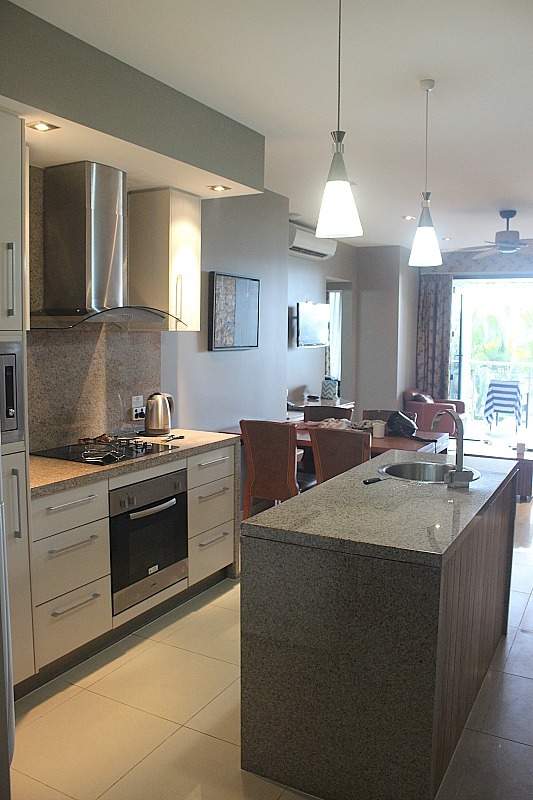 It was hard to leave our apartment. There was a big comfy bed, a cute private balcony with two chairs perfectly positioned overlooking the gardens, and there was Air-con – really powerful Air-con.

Don’t underestimate the attraction of good air-con in the tropics. It cannot be overstated. 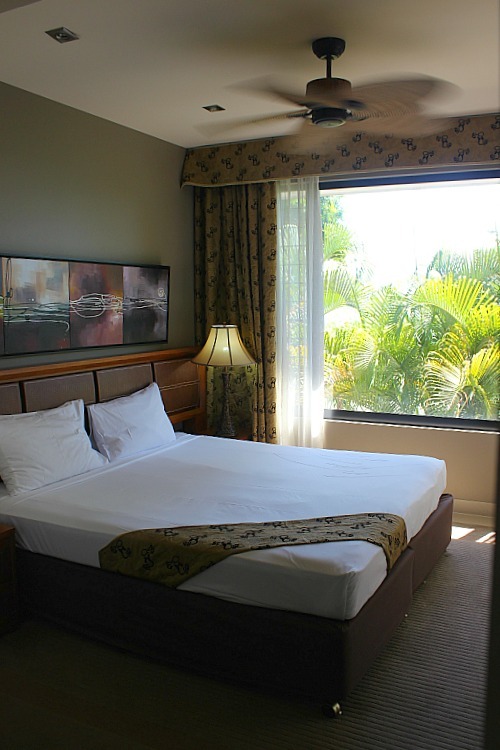 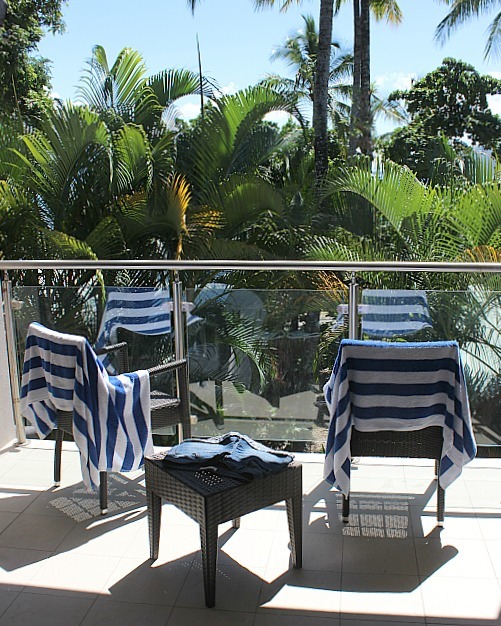 After running around the apartment for a while in glee, we finally pulled ourselves away to brave the heat and further explore.

It wasn’t long before I made myself comfortable in Fitzroy Island Resort’s pool area. I have been obsessed with swimming pools since I was a kid and as we never had one, it is an obsession that has followed me into adulthood.

I have sneaked into many a hotel pool during my travels but it can be hard to fully relax while doing this as you are always on guard. It felt good to know that I was allowed to be there.

All of the loungers were taken but all I wanted to do was get in that perfect pool anyway. I grabbed a fruity drink from the swim up bar and felt pretty damn pleased with myself. I wish I could afford to stay in hotels more often, especially if they were all like this one. 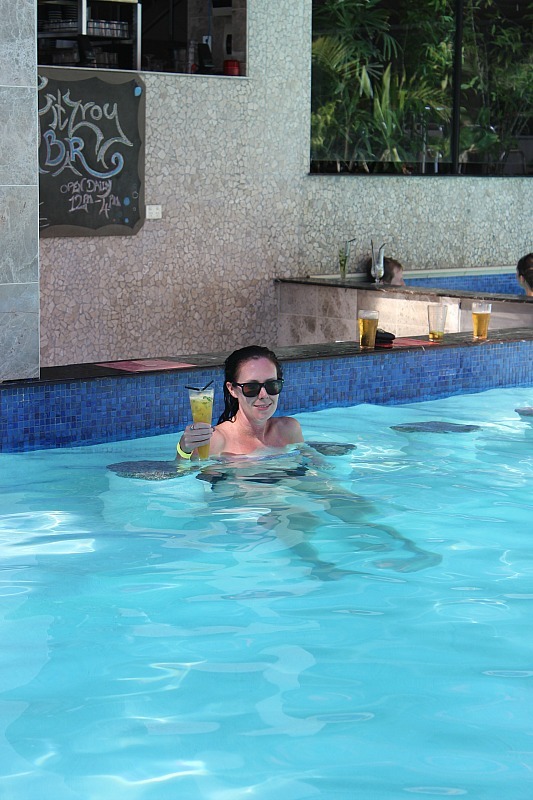 There was a buffet dinner in the Fitzroy Island Resort’s restaurant during our night on Fitzroy Island so we decided to treat ourselves to a night out. The restaurant overlooked the beach and the moon was large and bright; almost full. Its silver reflection shimmered on the water.

We were seated out on the front deck and could hear the waves lapping on the beach in front of us. It was the perfect setting to gorge ourselves on giant prawns, fresh salads and profiteroles. 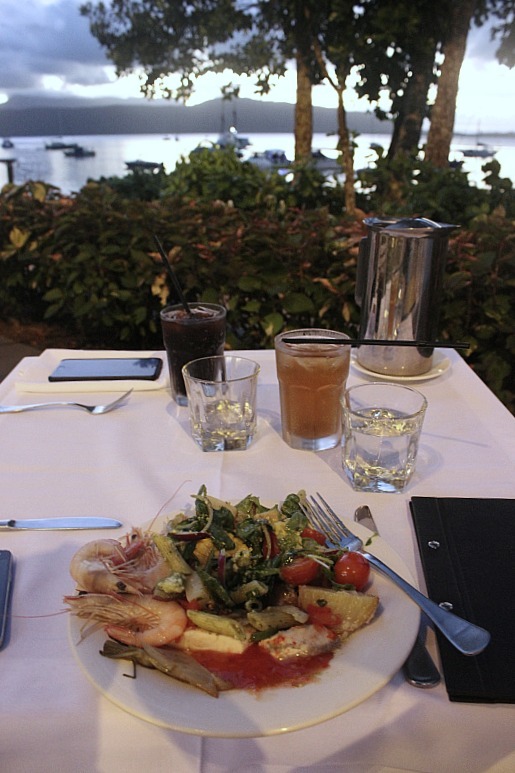 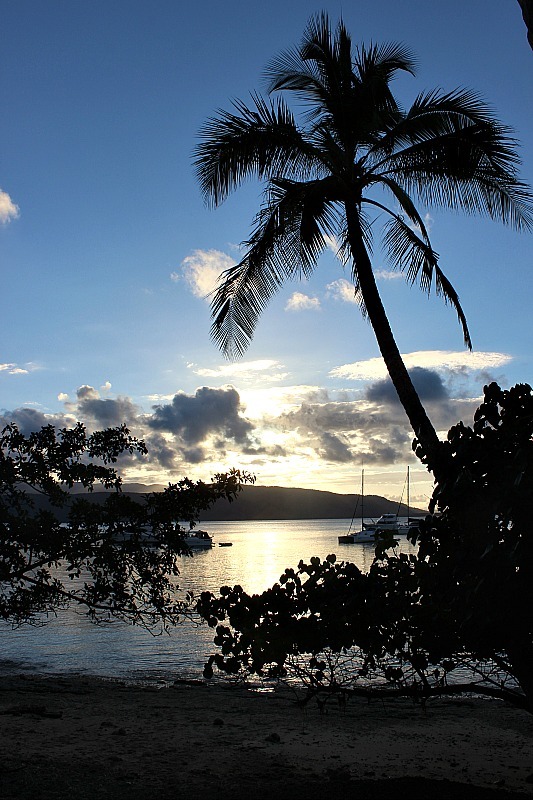 We loved nearly everything about the Fitzroy Island Resort. The only dampener on our time there was the rude staff member at the dive shop where we hired snorkels from.

He was arrogant and seriously lacked in customer service skills. All of the other staff that we encountered were fantastic so it was a shame that one rude person let the rest of the team down. 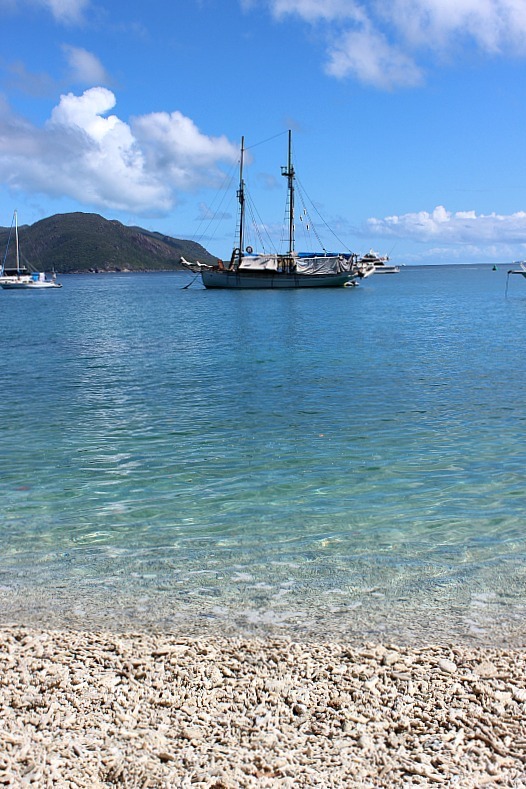 The beach fronting the Fitzroy Island Resort was gorgeous but there were quite a few boats anchored just off shore making it a busy place to swim. We heard that a 15 minute walk through the jungle would take us to a quieter beach that was meant to have good snorkelling, the misleadingly named Nudey Beach.

Nudey Beach is in fact not a nudey beach although it once was an un-official one before the nudity was put to a stop by the new owner of the Fitzroy Island Resort back in 2010.

Walking through the cool jungle along a rocky path then clambering over some slippery boulders we made our way to the beach. 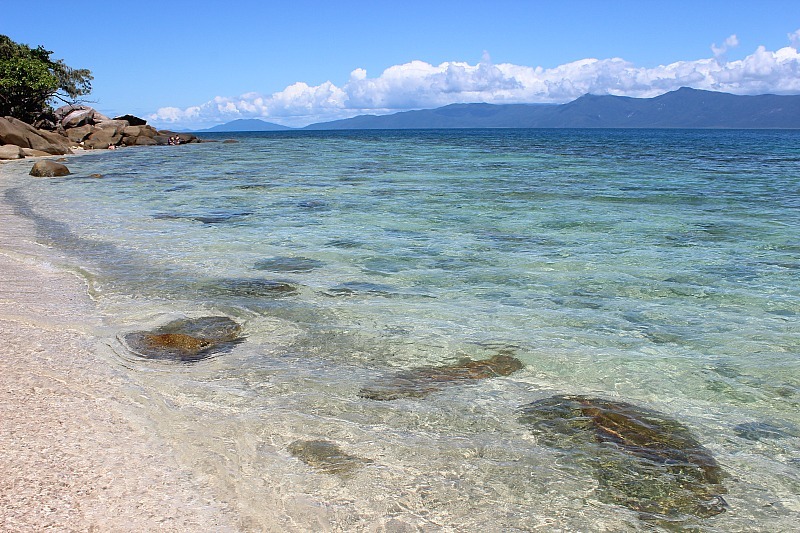 It was stunning. The coral beach was even whiter and the water was even clearer than the resort’s beach. I realized then that my worries about choosing Fitzroy Island over the white sand beaches of Green Island were completely unfounded.

The coral was really beautiful although a little bit rough on the feet, and it set the beaches on Fitzroy apart from all of the other amazing beaches in the area. The coral made it special. 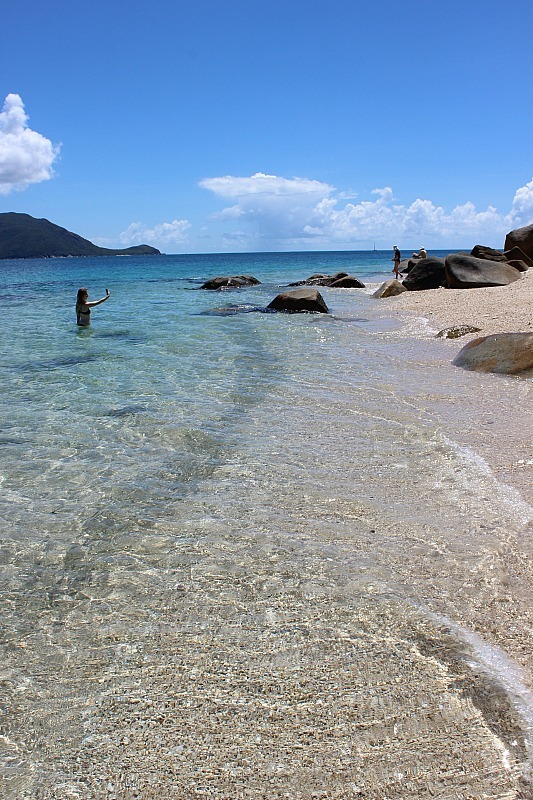 I was a bit nervous about jellyfish as it was still technically stinger season. We didn’t see anyone wearing the embarrassing looking stinger suits that you could hire from the dive shop but when we did go in the water, I was very vigilant about what was around me. 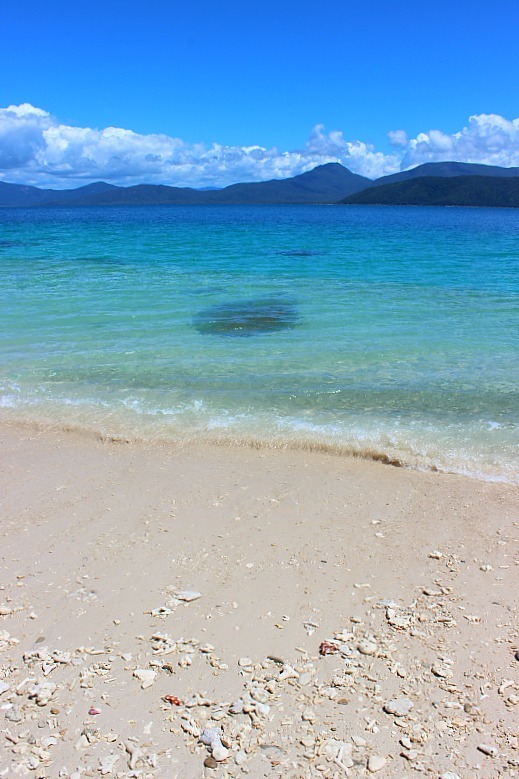 Sticking close to shore in waist deep water, I glanced back at the waterline and saw a dark shadow passing underwater between us and the beach. A first I thought it was a stingray but it was in fact a green turtle! I couldn’t believe how close it swam to us.

Trav had the snorkel and mask on so he followed it for a bit while I watched from the shore. I certainly hadn’t expected that.

I snorkeled around some sad looking coral off-shore where there were a few tropical fish hanging about but it was pretty disappointing after snorkeling the outer Great Barrier Reef the day before. It didn’t matter. I was happy just sitting in the warm translucent waters or soaking up the sun on the beach.

I really wanted to hike to the summit of Fitzroy Island but we didn’t bring any appropriate footwear: all we had were our sandals. We decided to give it a try anyway, but we waited until later in the afternoon when the sun had lost some of its intense heat. 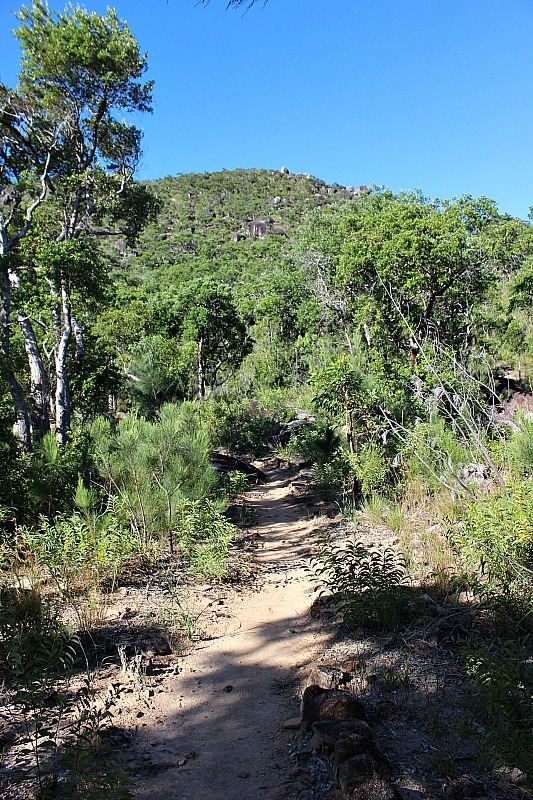 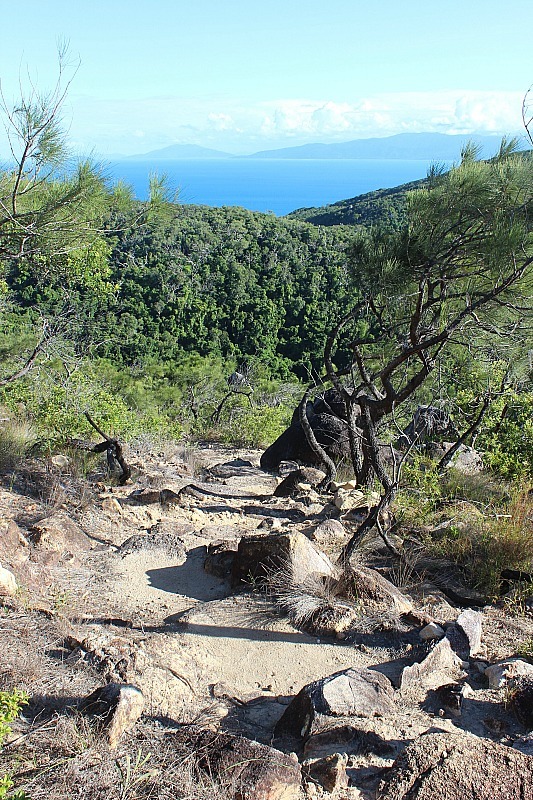 The first part of the hike was up through the jungle before emerging into a drier, Mediterranean like landscape with dried pine needles coating the sun-baked path. The path became steeper but the views were panoramic.

We stopped often to catch our breath and to drink water to stop from overheating. 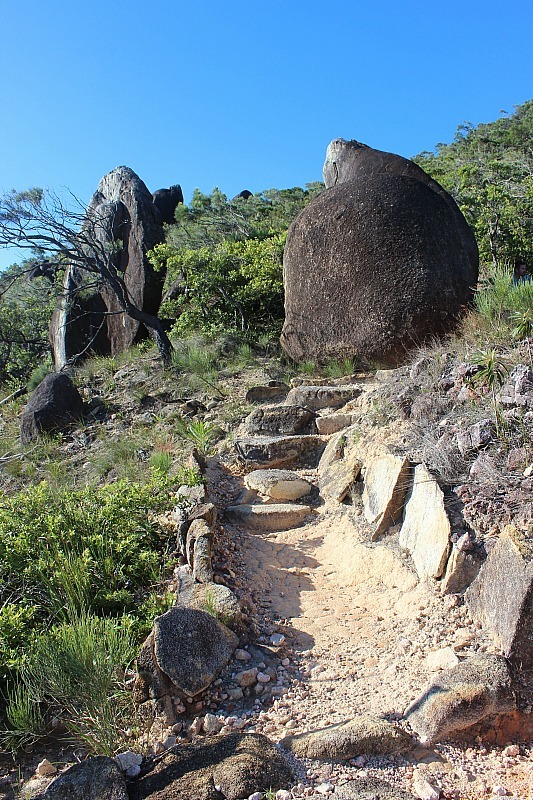 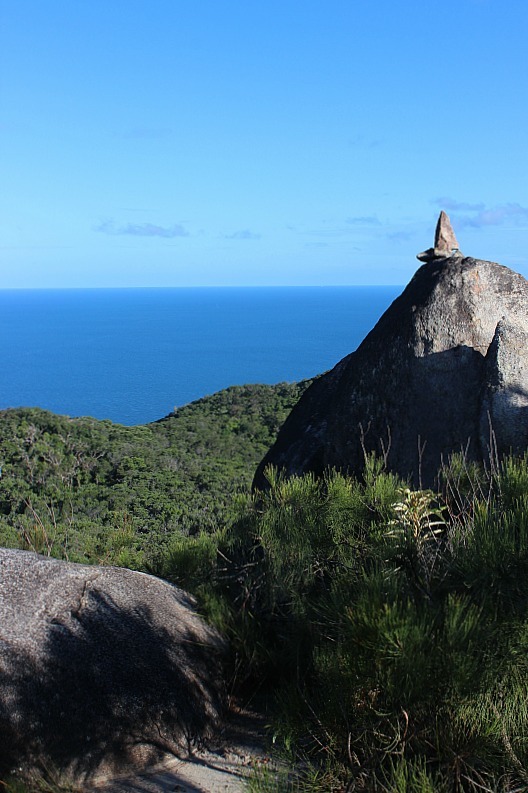 After reaching the viewing platform at the top we could see in all directions. There were a couple of small sand islands further out on the reef with small boats travelling between, leaving white foam trails on the ocean behind them. The mountains of the mainland were prominent in the distance. 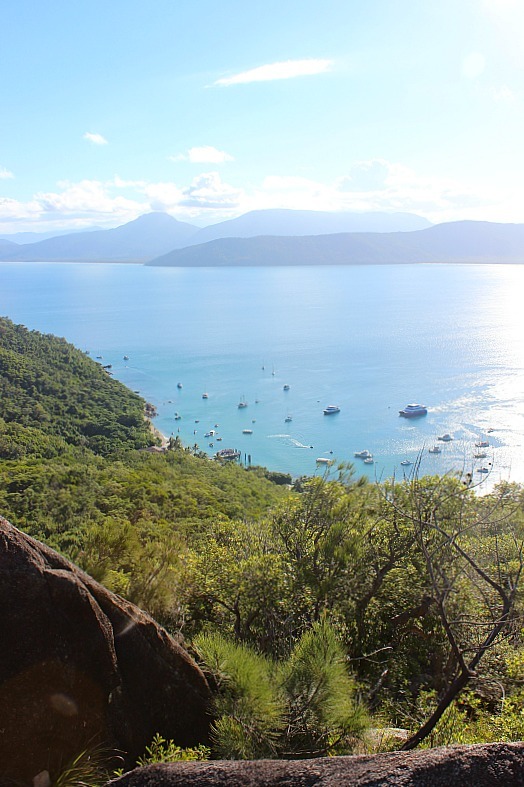 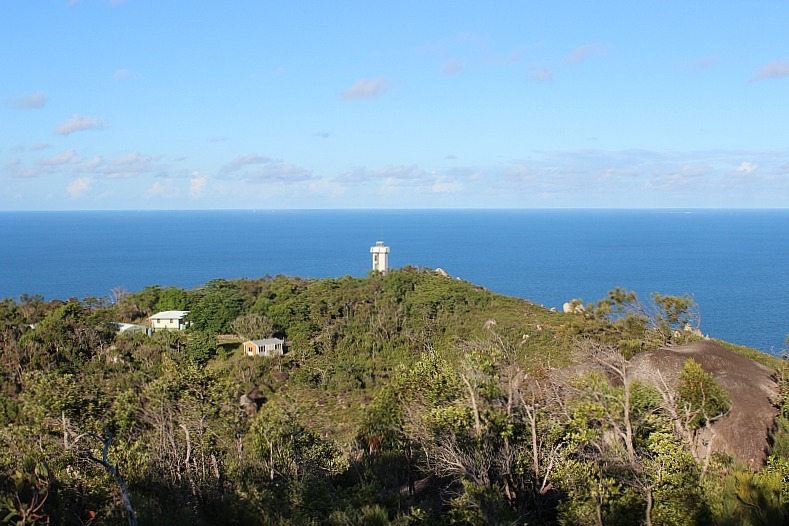 The lighthouse hike met up with the summit path just down from the viewing platform so we took that down to make the hike a loop.

We took the short detour to the abandoned lighthouse. It looked like it used to be a popular tourist destination for day-trippers once but now the information signs were illegible and peeling from the harsh sun. The weeds were knee-high and old rubbish was strewn around. 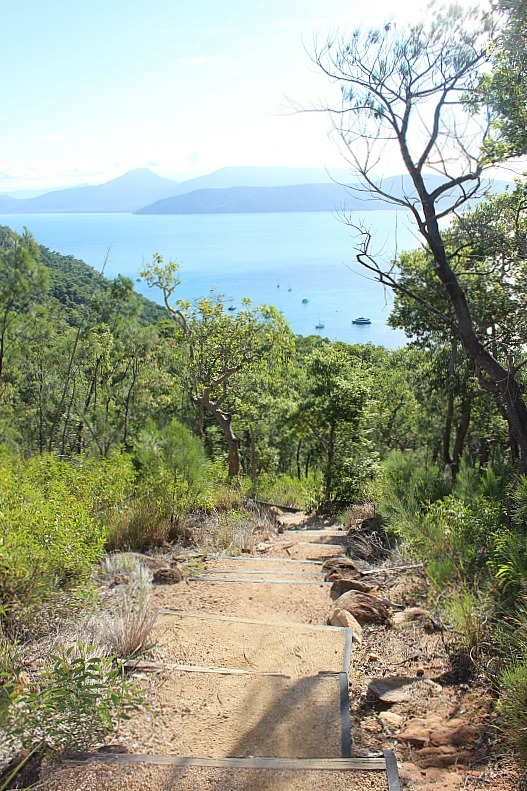 We got back just before it got dark. It was a beautiful hike and like on most hikes we do, we didn’t see any other people until we were within a kilometre of the resort.

It only took us one hour and 45 minutes at a leisurely pace rather than the two and a half hours we were told it would take. And it was easily done in our sandals.

Another short hike on Fitzroy Island is the Secret Garden walk. It is not actually to a garden but takes you along a boardwalk into the rainforest. It was short and sweet and was an easy way to get some alone time in nature. 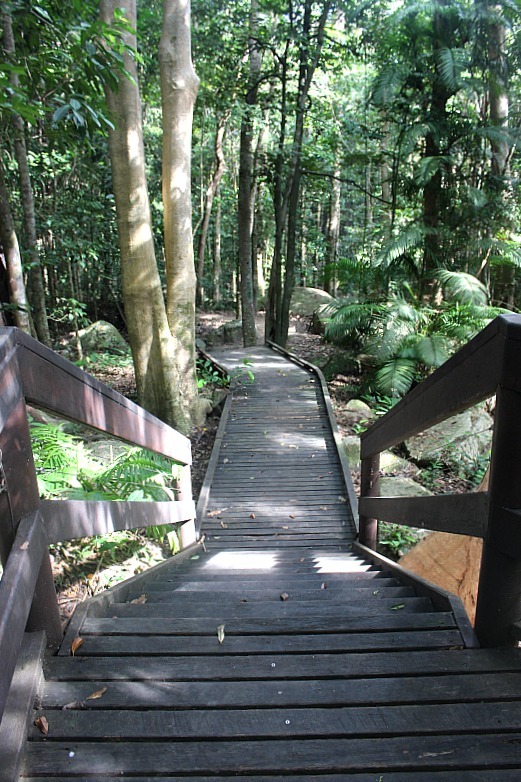 Fitzroy Island turned out to well and truly exceed my expectations. A true island paradise within one of the busiest tourist regions of Australia.

Thanks to the Fitzroy Island Resort for discounting our return transfers and for the amazing upgrade! 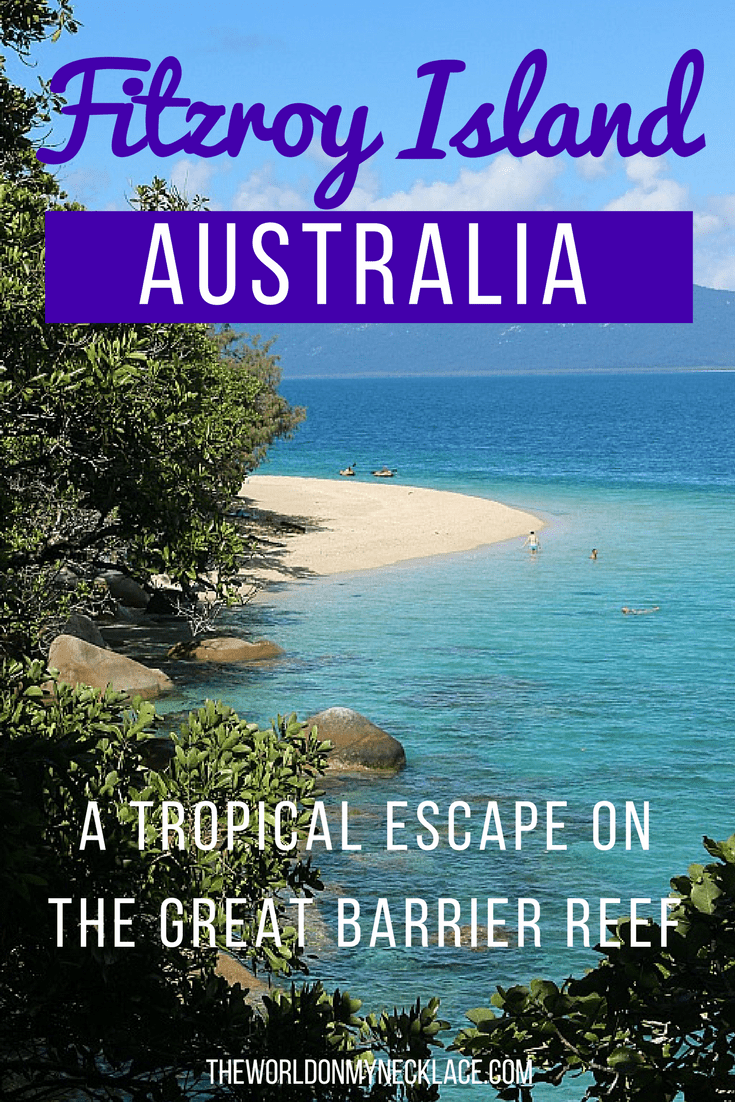 10 Comments on Fitzroy Island: A Tropical Escape on the Great Barrier Reef