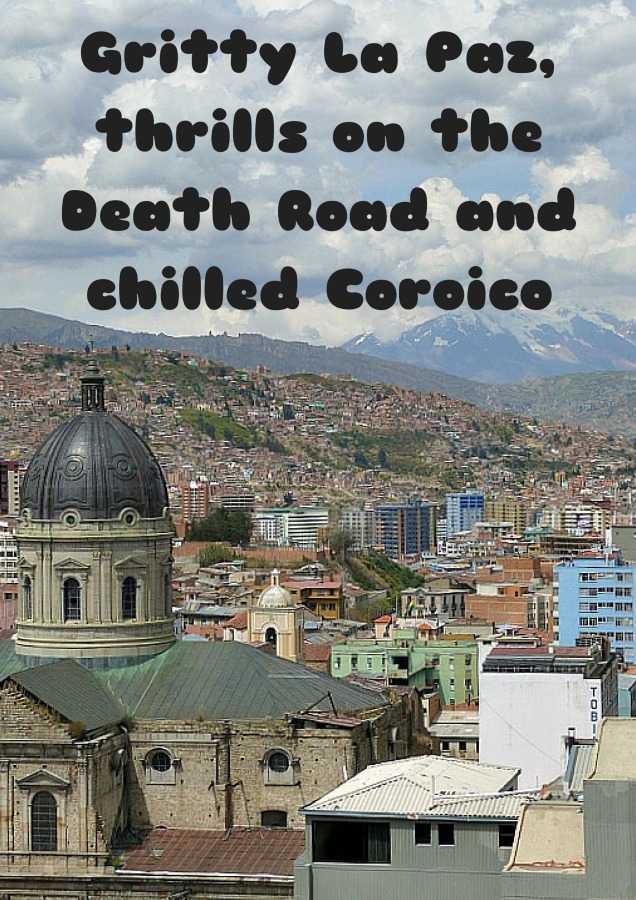 La Paz is a big, dirty city but what makes it different than most is its spectacular setting, in a natural bowl surrounded by high mountains to protect it from the harsh climate.

I wasn’t overly impressed by La Paz on my first day looking around. There aren’t a lot of obvious attractions and I didn’t see any of the beautiful plazas, green spaces and colonial architecture that a lot of other Latin American cities possess.

We ended up doing a bit of bar hopping with new friends and found a great Mexican place for dinner (and two of Robbie’s friends from home!) so despite a lackluster introduction to Bolivia, we had a fun first night.

We heard about a free walking tour of La Paz from Rob’s friends so we met at the Plaza San Pedro the next morning. It is a beautiful plaza and is very interesting too as it is where the infamous San Pedro prison is situated.

For all of you that have read the book ‘Marching Powder’, you will know the prison I speak of and its unusual modus operandi. Basically the inmates have to pay their own way.

If they are rich, they can afford to rent a luxurious penthouse suite with a jacuzzi and if they are poor they may have to share a dank cell with other unfortunate inmates.

The inside is like a small village with shops, restaurants etc, and a lot of the inmate’s wives and children live inside the prison with them as the inmate can’t afford to support his family on the outside as well as pay his way inside.

The children are escorted to school every day (which is located on the otherside of the plaza) by guards and brought back in the evening. There are legal and illegal ways that the inmates make money in the prison.

One of the illegal money makers is producing apparently the best cocaine in Bolivia. Tours used to be conducted inside the prison but we were told by our Guide this is now highly illegal and very unsafe.

Trav took a photo of the outside of the prison and immediately a guard stormed over and made him delete it. They are apparently very strict about not letting photos be taken of the building, incase people are casing the joint and looking for weak areas where the inmates may be able to stage a break out.

Next we were taken to the open markets and told about the local indigenous women, known as Cholitas, and how some of the richer ones spend thousands of US dollars on handmade Italian hats, silk shawls and handcrafted dresses for special occasions.

They also like a bit of bling and wear expensive jewellery and get gold teeth. When they are going out in all of their finery they often hire bodyguards to ensure nothing is stolen.

We were taken to the Witches Market where people that are building a new house can purchase llama foetuses which need to be buried under any new construction for superstitious reasons.

There is an urban legend that if a very large building is being constructed, a man or a couple need to be buried alive under the building site for good luck.

Locals say that a homeless alcoholic will be lured with alcohol and when they pass out they are buried at the construction site. Pretty scary and a good reason not to get too drunk while in Bolivia! 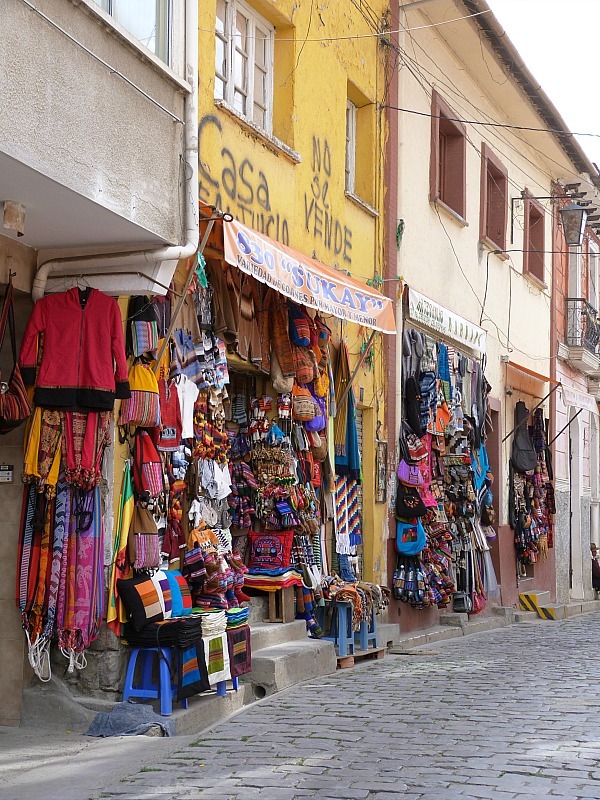 After visiting the Plaza San Francisco and Mercado Lanza, we headed over to the Spanish side of town and the stunning Plaza Murillo where the Seat of Government is located. 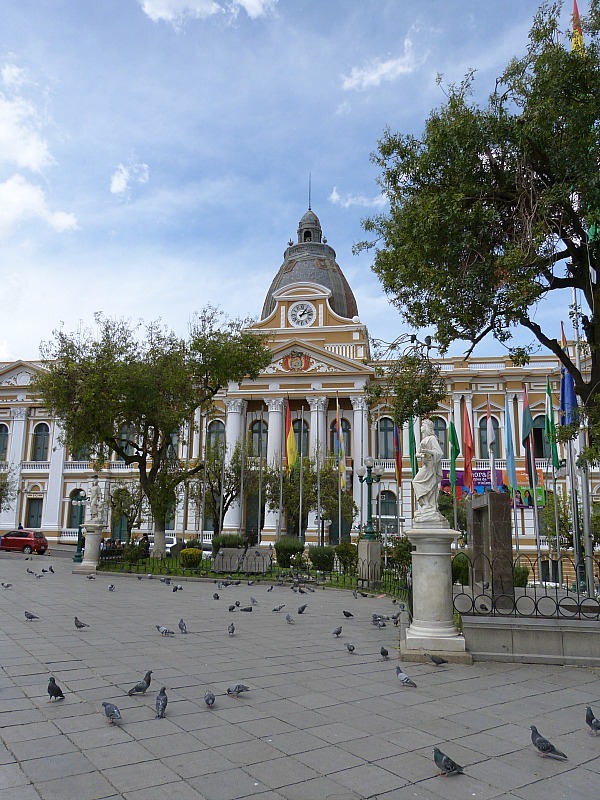 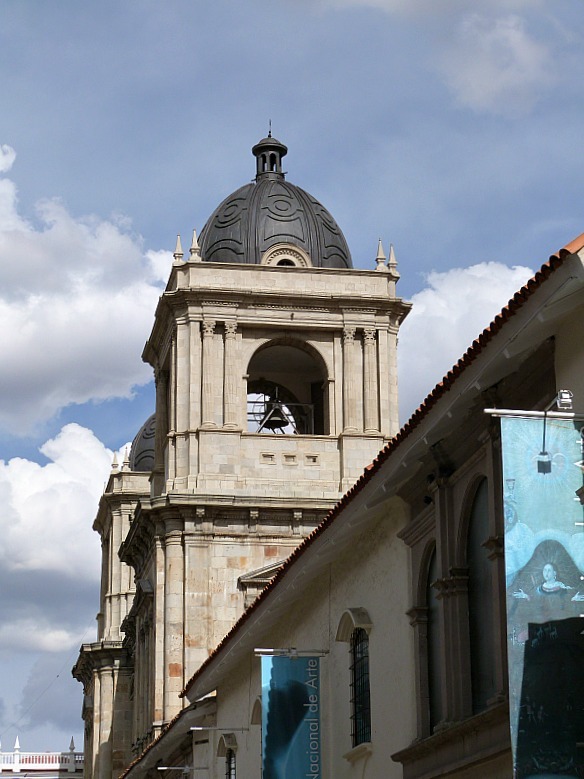 We saw the changing of the guard and heard about the corrupt past Presidents of Bolivia, including the idiot who gave away two fingers worth of the country on a map to Brazil for a white horse that he liked.

Bolivia has in fact lost a lot of land to Chile, Brazil and Argentina over the last hundred years. 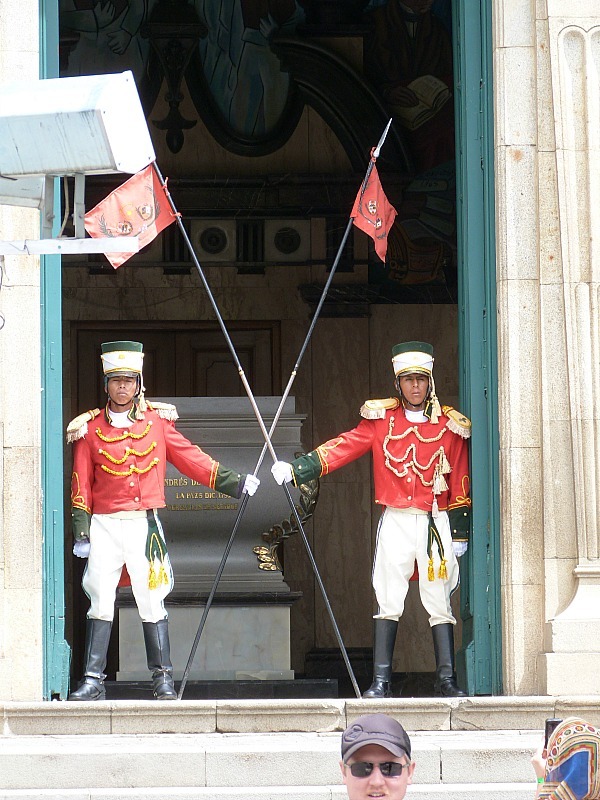 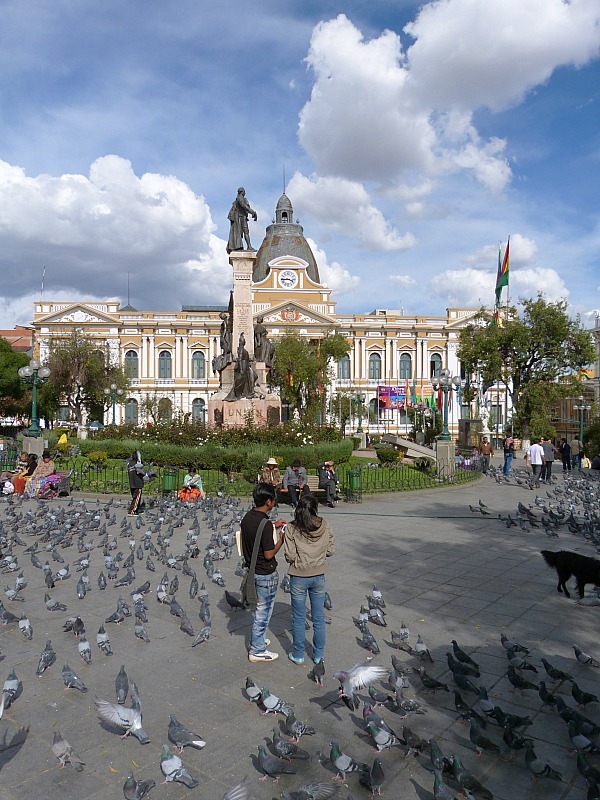 The tour ended at the top of a five star hotel with great city views.

The tour definitely changed my mind about La Paz and is a great way to learn about an intriguing city with a lot of history. I feel quite familiar with it now after hearing its darkest secrets.

The afternoon was spent further exploring the Witches Market where Rob brought a Charango, a traditional instrument similar to a Ukelele, and I got some more cute woollen finger puppets (my South American vice – I have 8 now!) including a kiwi. I never thought the local Cholitas would even know what a kiwi is but there you go.

We booked Death Road Biking for the next day and our pampas tour and flights for a few days time. We also had a fantastic cappuccino at Pepe’s Coffee – simple pleasures.

The next day we were picked up to go biking on the Death Road. This is something that I have known about for years as it is a very popular excursion from La Paz and a few of my friends have done it in the past.

The road is known as the Death Road as it had the highest death count of any roads in the world due to its narrowness, sharp corners and sheer drops. It isn’t used much by cars anymore as another safer road has been built, and I think we only saw about 2 other vehicles on our descent other than the biking support vans.

The start point for the day’s biking is at 4700m above sea level. We got kitted out with loads of padding then biked through beautiful mountain scenery for 26km down a paved road.

I absolutely love downhill road biking and it is one area where I am not a big scaredy-cat. There is nothing like zooming down an endless hill going as fast as you can.

It was snack time after that then the vans took us and the bikes to the official start of the Death Road. The weather quickly turned cloudy the lower we got in elevation and it started to rain a bit. The next 35km was downhill on a bumpy gravel road, being careful to take the corners slowly so not to plummet off a cliff to our deaths.

I started off pretty slowly as I am not as confident on gravel, but after about an hour I threw caution to the wind, started hooning it down and had so much fun! I nearly skidded off my bike a couple of times but came away from the Death Road unscathed in the end.

No one was seriously injured out of our group although one guy scraped his arm. I don’t know the last time I have had so much fun! Seriously thinking of mountain biking being my new hobby.

Unfortunately I didn’t get any photos of my crazy descent as I wasn’t nuts enough to carry my camera with me as it would have very likely have been broken. You will have to use your imagination. Or google image it.

We all got the obligatory ‘I survived the Death Road’ t-shirts and were taken to a hotel for a celebratory buffet lunch and swim in the pool.

Descending from 4700m to about 2600m, the landscape had changed immensely, from snow covered peaks to lush tropical jungle, in a short space of time.

Our team decided to stay in nearby Coroico instead of the 3 hour drive back to La Paz so we were dropped at a nearby town and caught a collectivo the rest of the way. 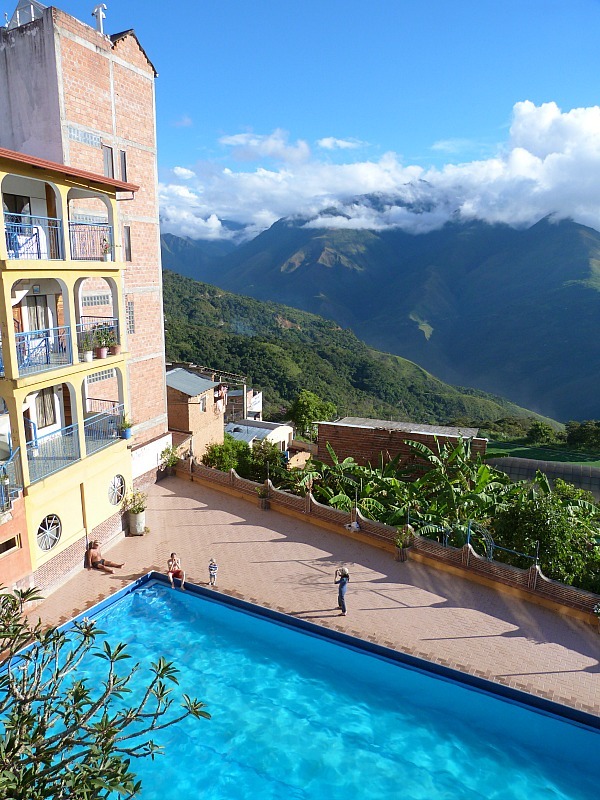 Our first night we stayed at a cheap hotel with a great pool and amazing views over the valley and mountains. I had a great pizza for dinner at a friendly Pizzeria on the Plaza. Coroico definitely felt very relaxed compared to chaotic La Paz! 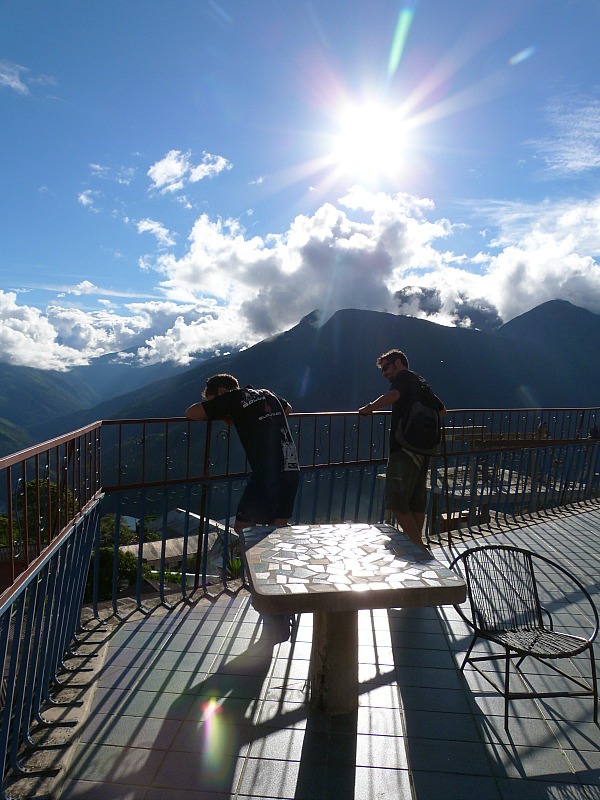 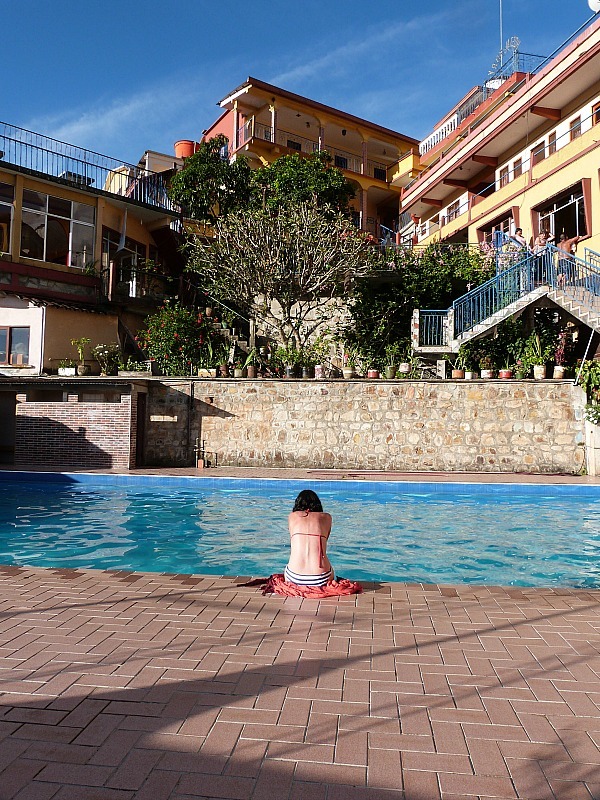 The next day we explored the sprawling weekend market, had possibly the best chicken empanada I have ever tasted and moved to more remote accommodations about 20 minutes walk into the hills from town.

Bozo had been recommended the place by a friend, it is called Sol y Luna and is set on a large plot of land with a pool and walking trails. 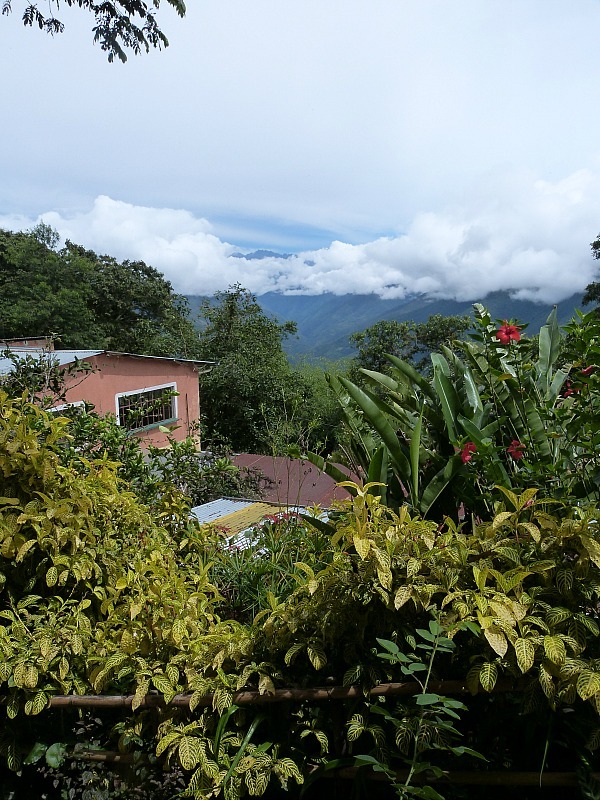 After dropping our stuff, we decided to do a hike to three waterfalls which was certainly an adventure as the path got very overgrown in places and my legs, and Austin’s arms, were criss crossed with very sore scratches from the long grasses, ferns and bushes.

The weather soon turned grim, with low menacing clouds. The first waterfall was unimpressive but we decided not to quit and to carry on to the others. We got a collectivo from a tiny town to the last two.

We went past the second in the collectivo and didn’t bother stopping. The third waterfall was definitely the best but we didn’t stay long as we wanted to get back before the rain began.

Bozo, being the the fearless Croatian that he is, swam in the freezing water. 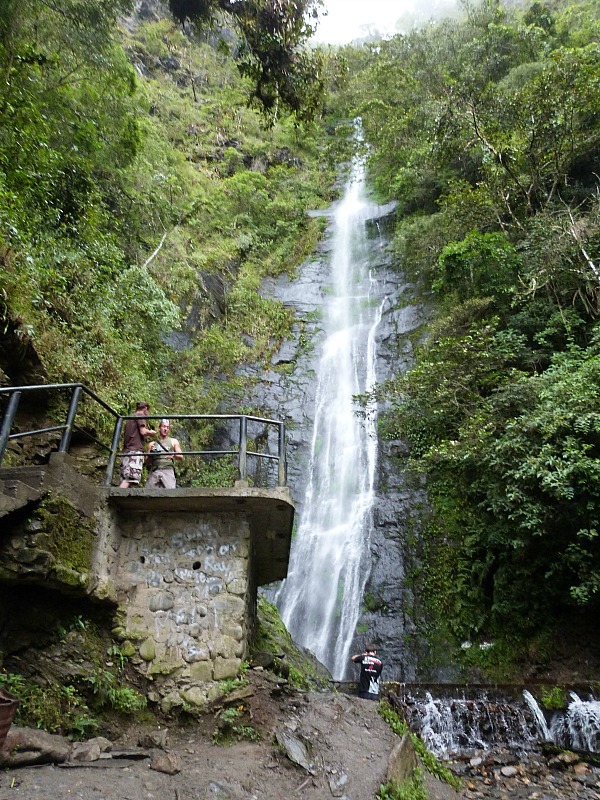 We had to wait for ages in the cold for a collectivo to pass but finally caught one back into town. Once we got back to Sol y Luna, we were cold and exhausted so we spent the rest of the afternoon and evening wrapped up warm in bed.

The following day there was nicer weather and we explored the beautiful grounds of Sol y Luna. Lots of exotic plants and flowers and we saw a capybara, the largest rodent in the world.

I am not a huge rodent fan but the capybara is kinda cute. We also saw a gigantic fist sized snail. 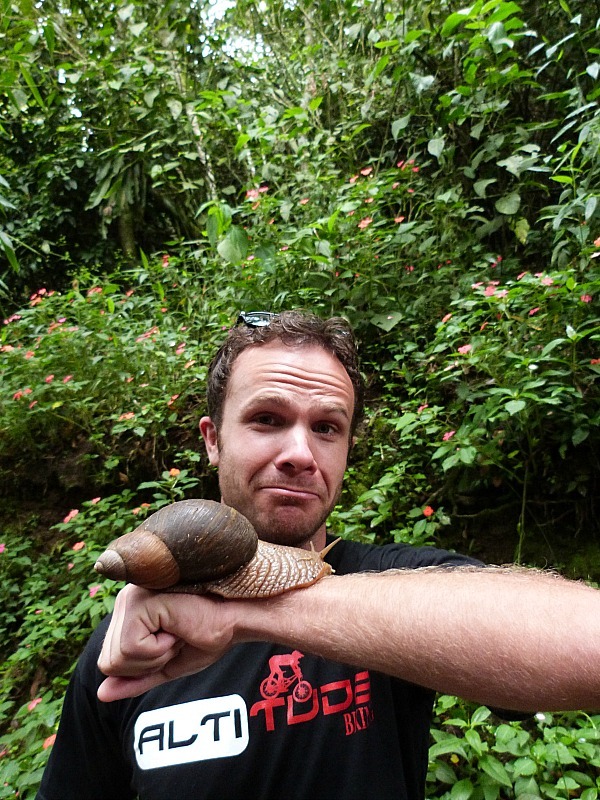 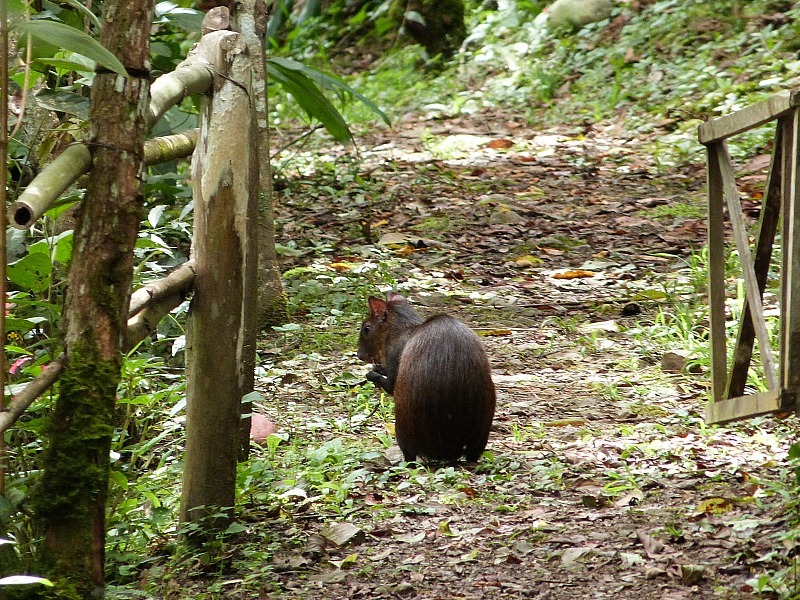 In the afternoon we headed back to La Paz, where we had a night before our flight to Bolivia’s slice of the Amazon Basin: Rurrenabaque.

It was nice to be back in La Paz and we had another walk around the markets followed by a delicious dinner at La Paz’s most famous fast food joint – Pollo Copacabana. There are no McDonalds in the whole of Bolivia and who needs it when you have amazing fried chicken.

Our first week in Bolivia definitely caught our attention, and we were looking forward to learning more about this superstitious and traditional country.