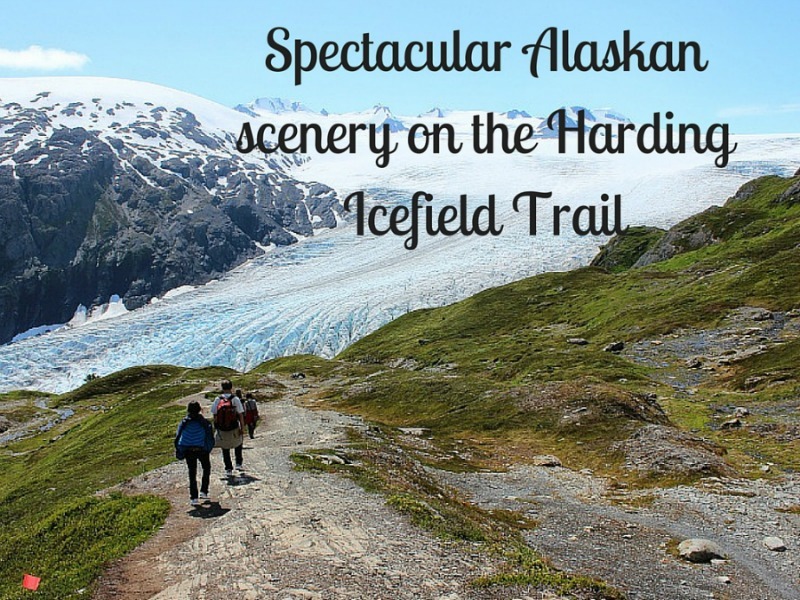 The sheer wildness and diversity of the landscape coupled with the emptiness of the State make it a dream destination for nature wanderlusters like me.

The iconic Harding Icefield Trail in the Kenai Fjords National Park ended up on my radar pretty early on in my Alaska planning. A hike through temperate rainforest, alpine meadows, and high above the mighty Exit Glacier to a viewpoint over a gigantic ice field: Yes please! 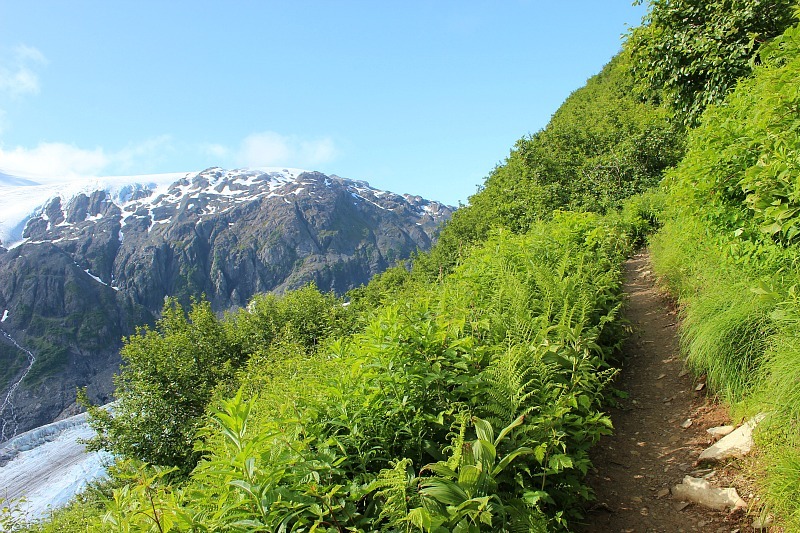 Arriving in Seward I was a bit nervous about doing the hike by myself, mostly because of the abundance of bears that live in the area, so I signed up to do a Ranger led hike which was conveniently taking place the day after I arrived in town.

With the trail being 13km return with almost 1000 metres of elevation gain, I knew I was going to be in for a long day of hiking. And I was bubbling over with excitement about it.

I ended up making friends pretty easily at my hostel in Seward and three of those new friends were also planning to do the Ranger led hike so we booked the shuttle to the Exit Glacier together for the next morning.

We arrived just as the two Rangers that were leading the hike had started their debrief. There were a lot of people that had turned up to do the trail and we all listened intently, laughing nervously when one of the Rangers was describing what to do if a bear attacks you. Apparently you don’t start fighting back until it literally starts eating you. Hmmm.

Setting off along a flat paved path was definitely not a sign of things to come. After five minutes, the long ascent to the ice field began.

The trail led us upwards through cottonwood and alder forest, only a narrow pathway cut through the thick greenery. At clearings along the way we stopped to regroup and take photos of the unfolding views over the glacier and down to the valley below. 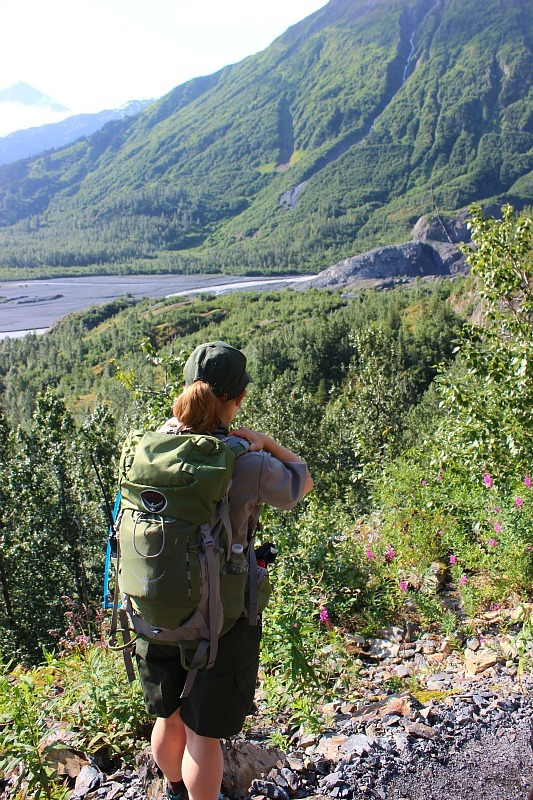 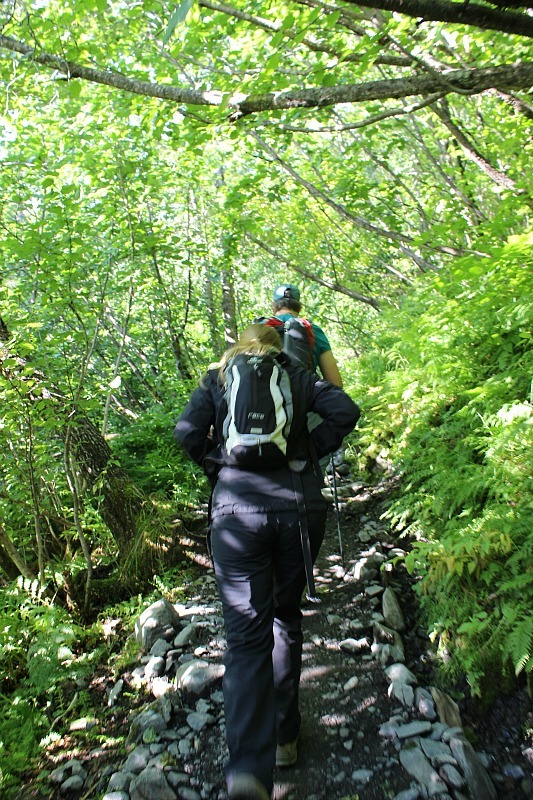 Our guide was very informative and pointed out all the edible wild berries along the trail. I tried salmon berries and watermelon berries. Unfortunately they both didn’t have a lot of flavour.

The trail wasn’t as steep as I had envisaged it to be but it was still an uphill slog. We lost half our group by the half way point – many just giving up, others falling way behind.

After a couple of miles we reached an alpine meadow above the tree line that was bursting with colourful wild flowers and had incredible views over Exit Glacier. The scenery was astounding and we stopped for a million photos. 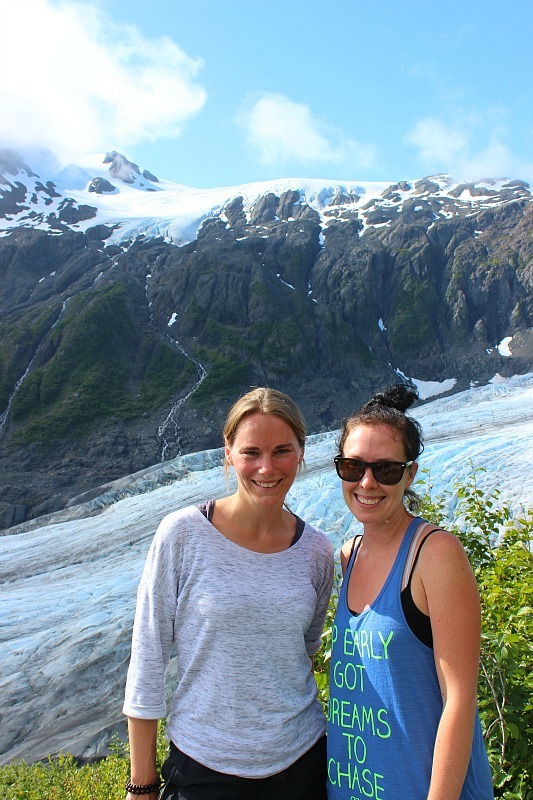 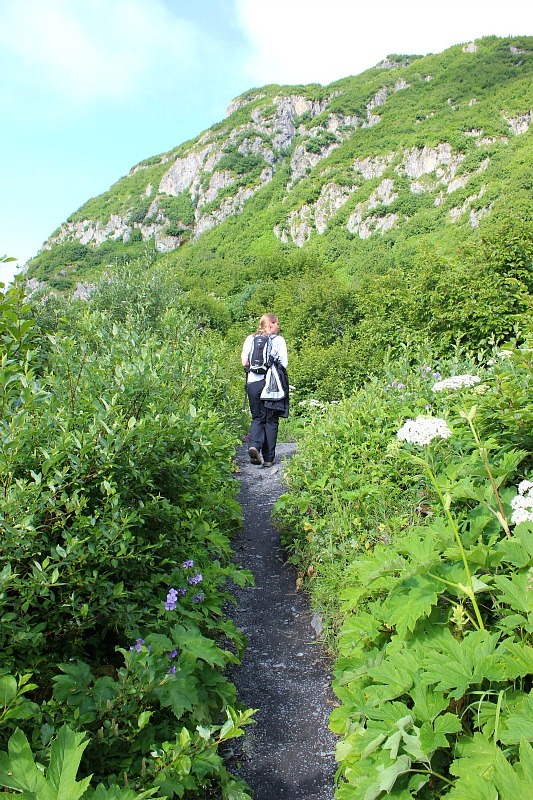 The hardest part of the hike was still to come: the steep switch backs on rocky exposed terrain that led up from the meadow.

With small loose rocks and scree, it was easy to slip as we gained altitude. Cascades of glacial water tumbling over the trail allowed me to top up my water bottle. It was some of the best water I have ever tasted, and it was ice cold. 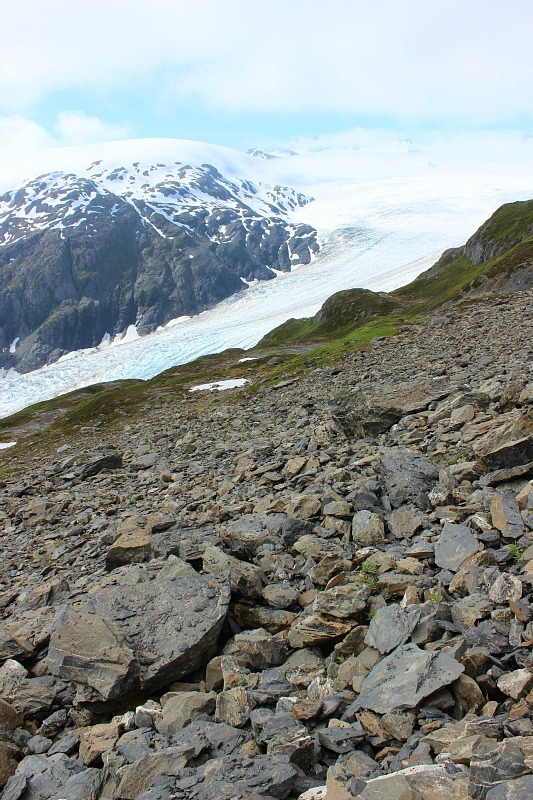 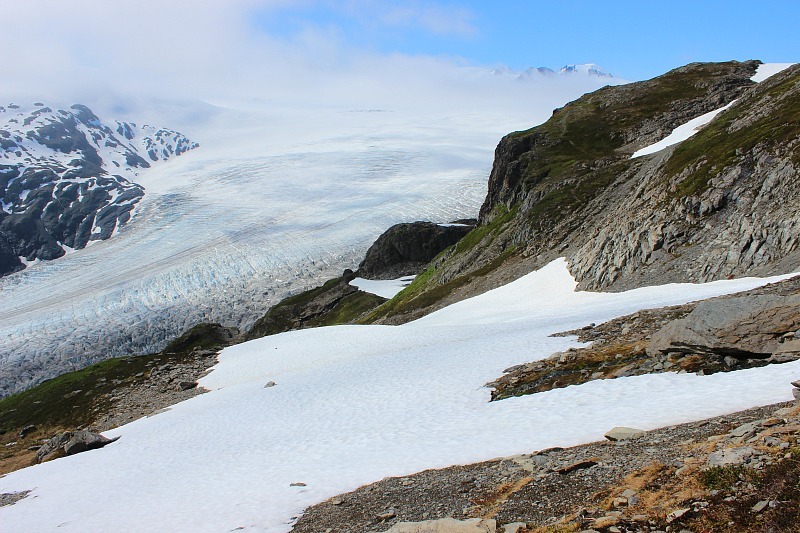 Lazy marmots stretched out their furry girth on flat rocks above the path.

The trail began to pass patches of snow as we neared the top and then we were hiking through it. The pure white blinding and spectacular under a bluebird sky.

We reached an emergency hut, just a shell to take shelter in if you were stuck up there in a storm. After a short break we tackled the last part of the hike, through increasingly larger fields of snow to the viewpoint over the Harding Icefield. 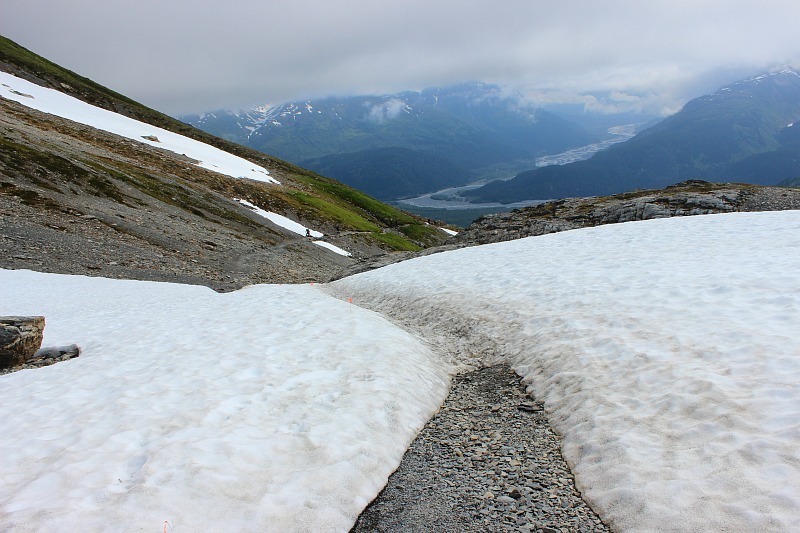 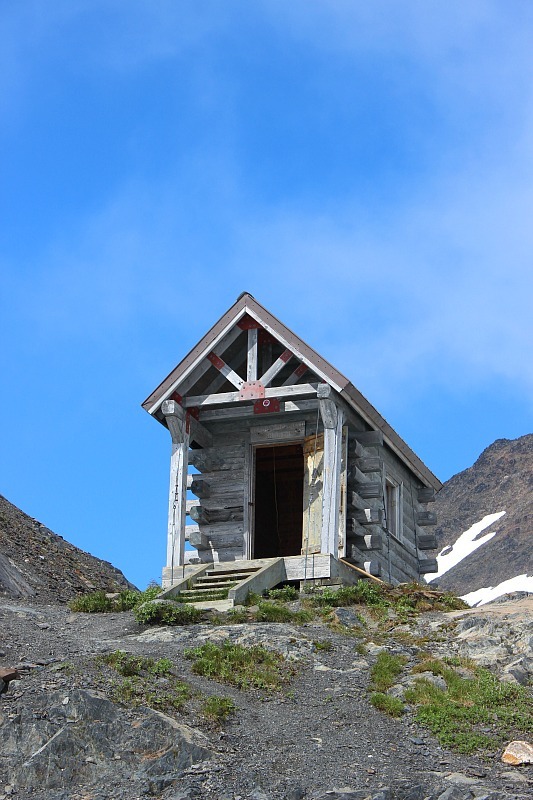 Endless ice stretched to the horizon in front of us, vast and wonderful: 700 square miles of blue white punctuated with lonely rock peaks.

The Harding Icefield is one of the largest non-polar icefields in the world, and the largest entirely within US borders. It is prehistoric, forming 23,000 years ago at a time when ice covered one third of the earth.

Rachel and Guy were still up there so we sat with them for a while, silenced by the majesty of it all. 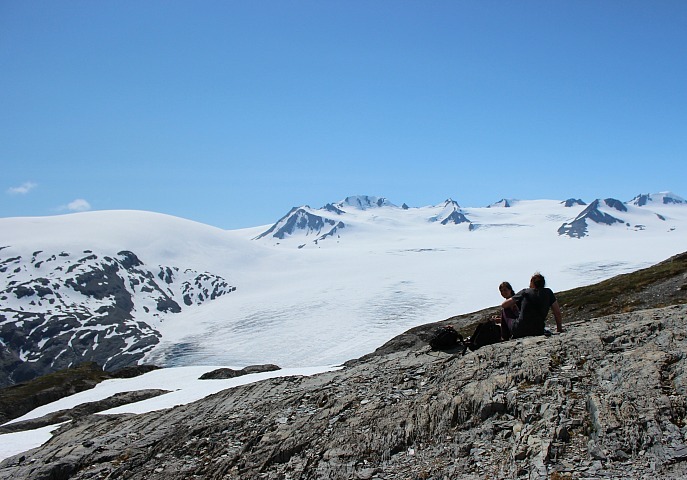 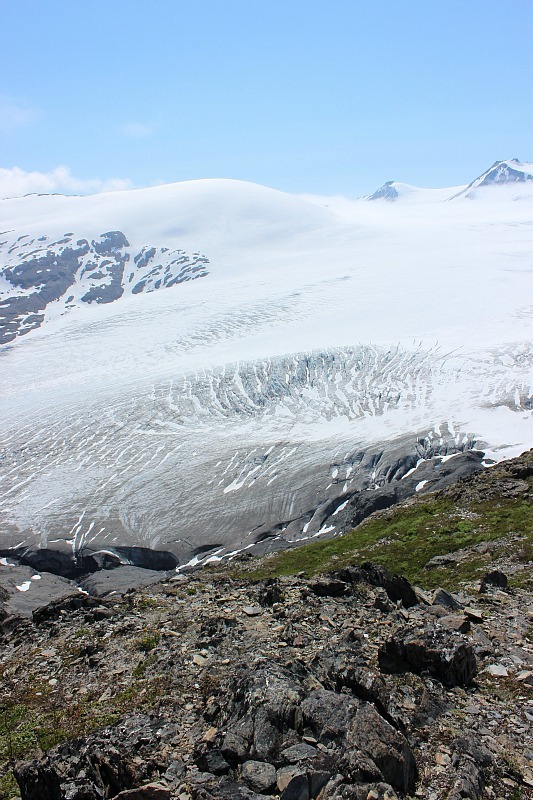 A couple of Ptarmigans, Alaska’s State bird, were hanging around. One of them already had its white feathers which apparently means winter is coming, a bit disconcerting as it was only mid July.

The groups had split up at this stage so the four of us decided to head back down by ourselves as Rachel and Guy both had bear spray and we hadn’t seen any bears on the way up. 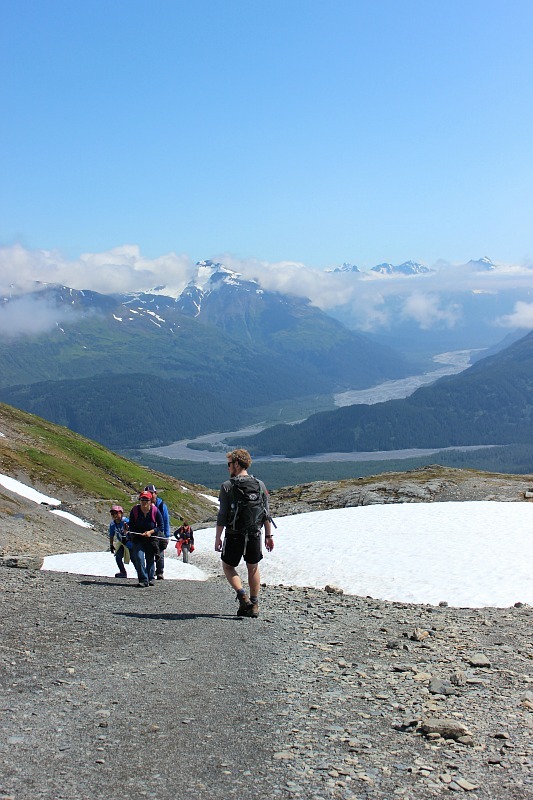 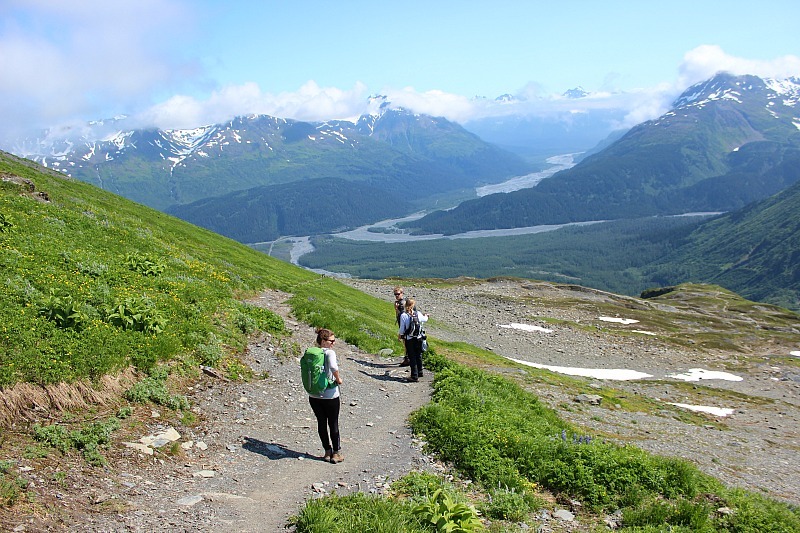 It was so much faster coming down. It always is. I slipped over in the snow a couple of times but otherwise we arrived back to the valley floor unscathed and uneaten by bears. Not being eaten by bears is always a win.

And so ended a fabulous day, hiking one of my new all-time favourite trails.

The Harding Icefield trail has such varied terrain that truly gives you an idea of the diversity of  Alaska’s incredible environments. Alpine meadows, scree slopes, snow, glaciers, rainforest, waterfalls, and an ice field. And all in a 13km hike.

Pretty impressive if you ask me. 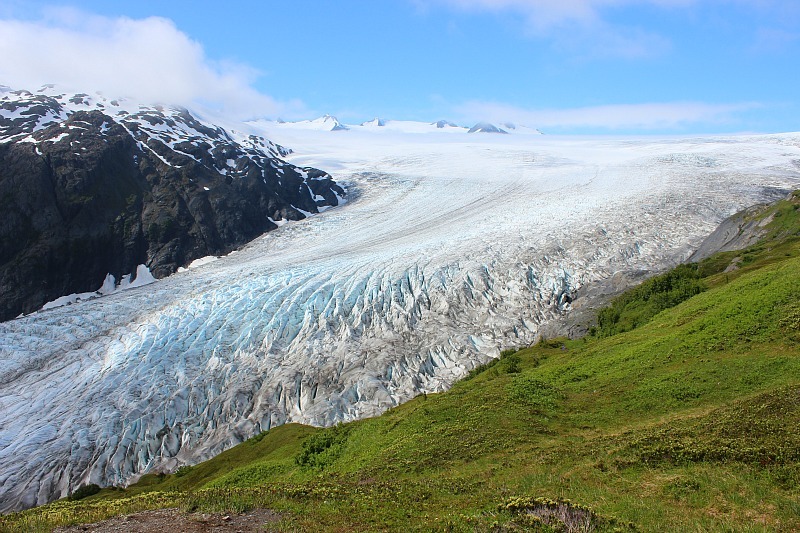 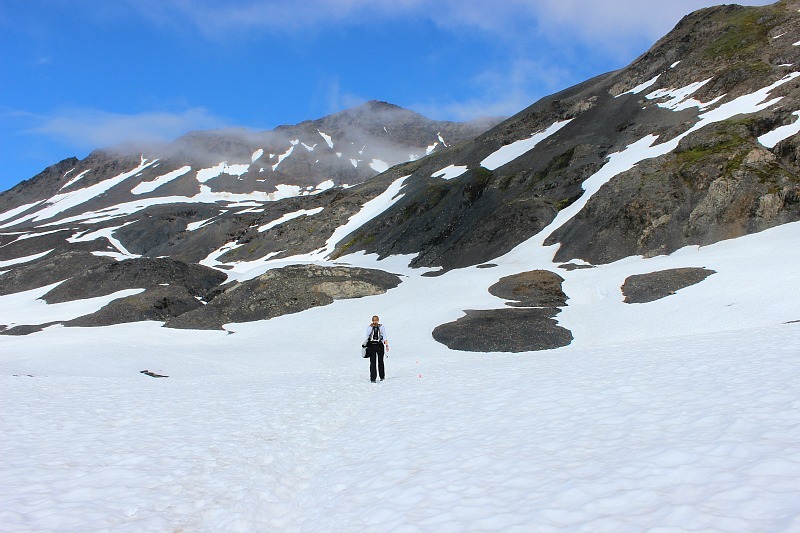 How to Hike the Harding Icefield Trail

Getting to the Harding Icefield Trail

To reach the beginning of the Harding Icefield trail. you can either drive and park at Exit Glacier Car Park or take the Exit Glacier Shuttle that costs $10 return with a few different times to choose from.

Difficulty of the Harding Icefield Trail

If you aren’t much of a hiker then I would rate the Harding Icefield trail as difficult. It was easier than I thought it would be but it still involved a 6.5km slog of reasonably steep uphill hiking. And then you have to go back down. My thighs burned a bit the next day.

Length of the Harding Icefield Trail

There are Ranger led Harding Icefield hikes from 9am on Saturdays in July to August. They are free to join. 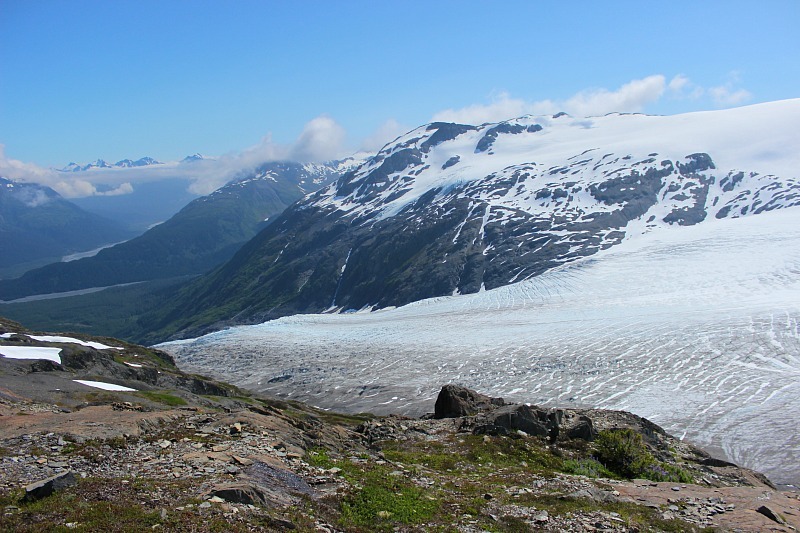 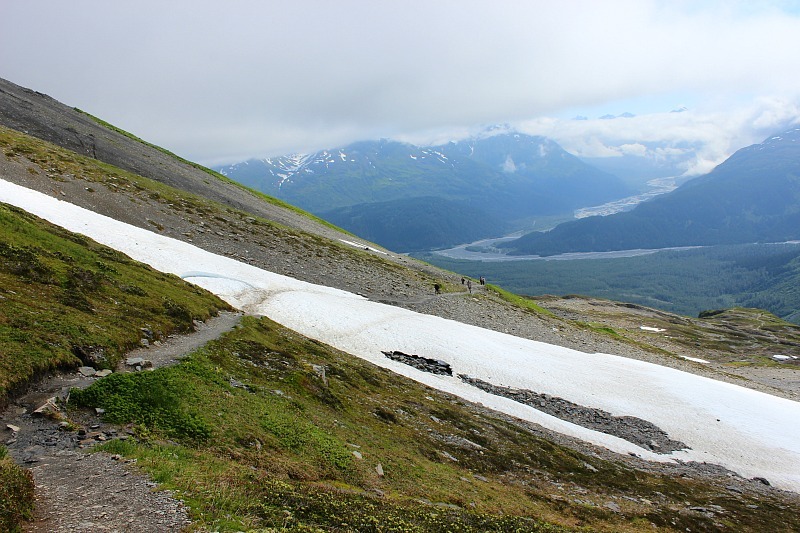 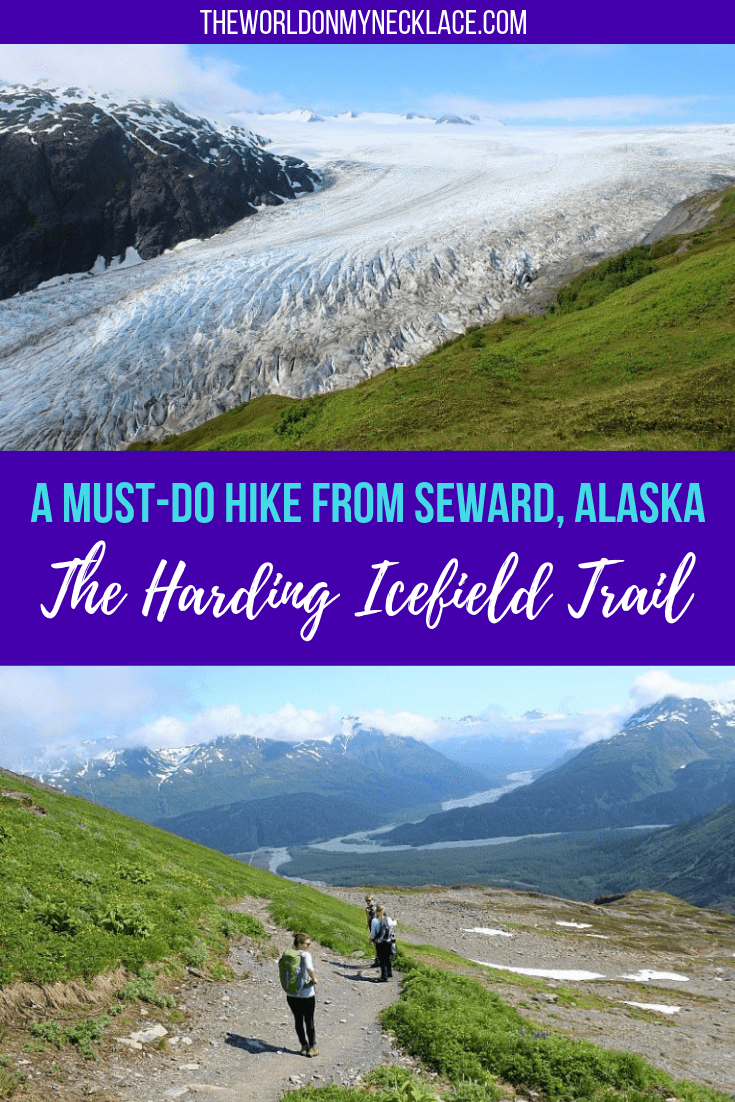 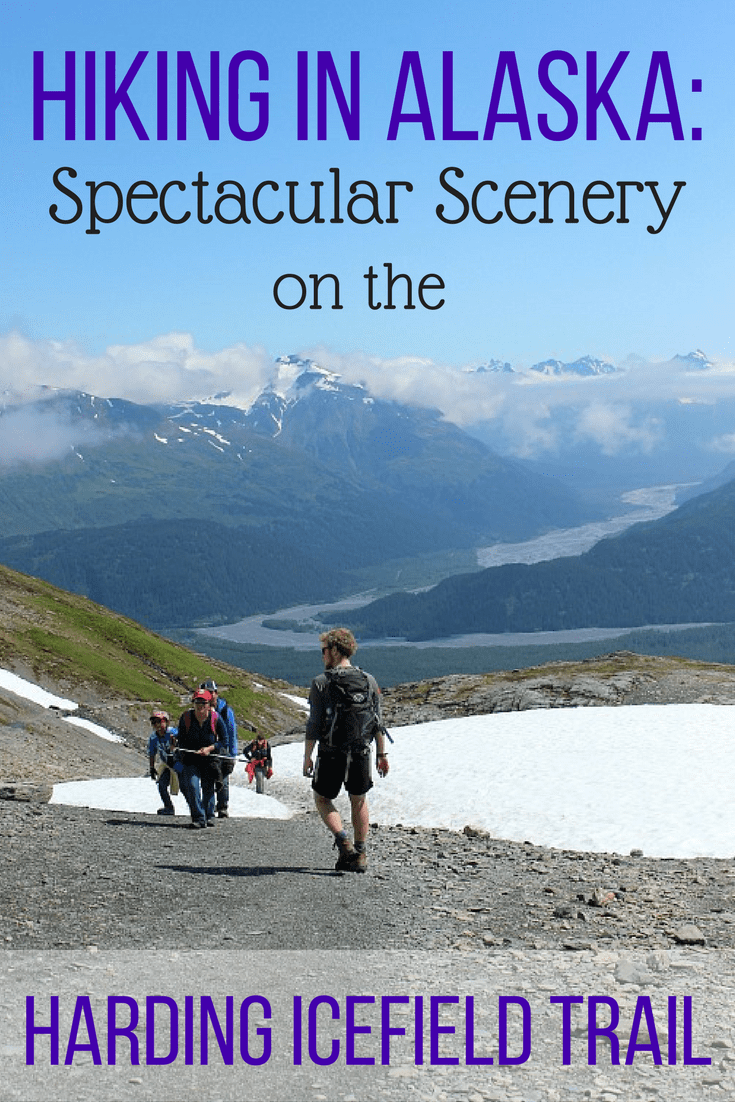 4 Comments on Hiking in Alaska: Spectacular Alaskan Scenery on the Harding Icefield Trail