Of the 14 National Parks in New Zealand, Mount Aspiring National Park has got to be one of the most awe-inspiring and remote.

There are three access roads to enter Mount Aspiring National Park, all of which barely penetrate beyond the park boundaries. Dad and I were staying in the scenic small town of Wanaka so we chose to drive the road to Raspberry Flats car park from there to do one of the more popular day walks in the park: the Rob Roy Glacier Track. A relatively easy but visually stunning hike to the massive Rob Roy Glacier, it sounded like the perfect introduction to Mount Aspiring National Park and not too strenuous for my usually non-hiking father. It is rated as one of New Zealand’s greatest hikes for a reason.

I could definitely see how this arrestingly beautiful part of New Zealand was used to represent Lothlorien and Isengard in the Lord of the Rings Trilogy. We started to catch glimpses of the mighty Mount Aspiring itself the closer we got to the park. I love how in New Zealand you can see working farms right next to jagged mountains and native forest. The farmers out here are bred tough and resilient, you would have to be to farm in this remote part of the country that bears the brunt of the often harsh and changeable mountain weather.

The last 33km of the one hour drive to the Matukituki Valley was gravel and there were several rivers we had to ford to reach the Raspberry Flats car park within Mount Aspiring National Park.

Technically we weren’t meant to do this in a rental car, but Dad and I don’t let little things like rental car restrictions stop us doing things that we want to do. Luckily it was a beautiful day and the water level was low so we had no issues.

I definitely wouldn’t have attempted it if the weather was bad, that journey would be a different beast altogether. Once we reached the car park in one piece, we hit the short 15 minute trail to the swing bridge over the Matukituki river, the official starting point of the Rob Roy Glacier Track.

It may have taken me a bit longer than 15 minutes as I stopped often to try luring the super cute lambs from the surrounding pastures. Unfortunately, they wouldn’t play ball. Then, over the glacial fed river and into the forest we went.

Sheltered from the increasing heat of the sun, the Rob Roy Glacier trail took us through a native beech forest that followed the pools and eddies of the clear river. Thick undergrowth of ferns and mosses covered the damp forest floor. Native bird song abounded. Hearing it always feels like home. A couple of kilometres in after steadily climbing, we reached a viewpoint over the river before heading back under the canopy of ancient trees again. The forest was still. The river gurgled below. Wooden stairs led us further upwards to another clearing where we caught our first glimpse of the glaciers in the distance. As the forest gave way to more open alpine terrain, we stopped for a snack. Dad wasn’t sure if he was going to hike the last part to the Rob Roy Glacier itself. I told him that I didn’t think it was much further but if he didn’t want to do it I would meet him back at the car, then I set off for the glacier.

The last section of the hike was far and away the most magnificent. A rocky trail through tussock grasses with mountain views abounding. The sound of the glaciers calving that I had heard at a distance earlier was magnified. Like a plane flying close overhead or a thunderstorm, a sound that reminds me of my time in Alaska and one that I am always happy to hear.

A wall of glaciers came into view as soon as I left the clearing. Ribbons of water spilled down the mountainside from the icy behemoths and onto the rocks far below. Chunks of ice tumbled, shattering to nothing before reaching the ground. The closer I got, the better the view. And then I was at the end of the trail and the Rob Roy Glacier was before me.

Sun glinted off the virgin white snow. Jagged peaks penetrated the bright blue sky. I sat on a rock, trying to take all of the beauty in. Mount Aspiring National Park was incredibly inspiring. Then Dad showed up. I was so pleased he decided to do the last part of the hike and so was he when he saw the view. We could have sat there all day soaking up the tranquility of this special place.

The hike back was downhill and went so much quicker than the way in, doesn’t it always?

Driving back to Wanaka I am pretty sure I had a big smile plastered on my face. This was one of those hikes that you know you will remember in years to come. Back at our hotel we rewarded ourselves with a soak in the Jacuzzi, thinking back on how incredible our taste of Mount Aspiring National Park was. It’s a tough life.

For my first time in the pristine wilderness that is Mount Aspiring National Park, I was suitably impressed. The beauty made my soul sing and if that is what I can see around the park boundaries, it makes me want to explore the furthest reaches of the park even more.

It was also a great warm up to the three day Kepler Track hike that I would be undertaking a few days later.

I am coming for you again Mount Aspiring National Park. I don’t know when, but I am coming. Getting to the Rob Roy Glacier Trail

To reach the Raspberry Flats car park in Mount Aspiring National Park you take the Mount Aspiring Road from the centre of Wanaka. The last 33 kilometres are unpaved and there are nine streams that you will need to ford to reach the car park.

Most rental car agreements will not allow you to drive their vehicles here and I would not advise it if the water level of the streams are high.

From the car park it is a 15 minute walk to the Matukituki bridge where the trail begins.

I would rate it as easy as the elevation gain is gradual and the path is well maintained. Do keep in mind that it is 10km return though. If you aren’t used to hiking this distance, then it will be harder.

If you liked this post, check out some of my other South Island and New Zealand hiking content: 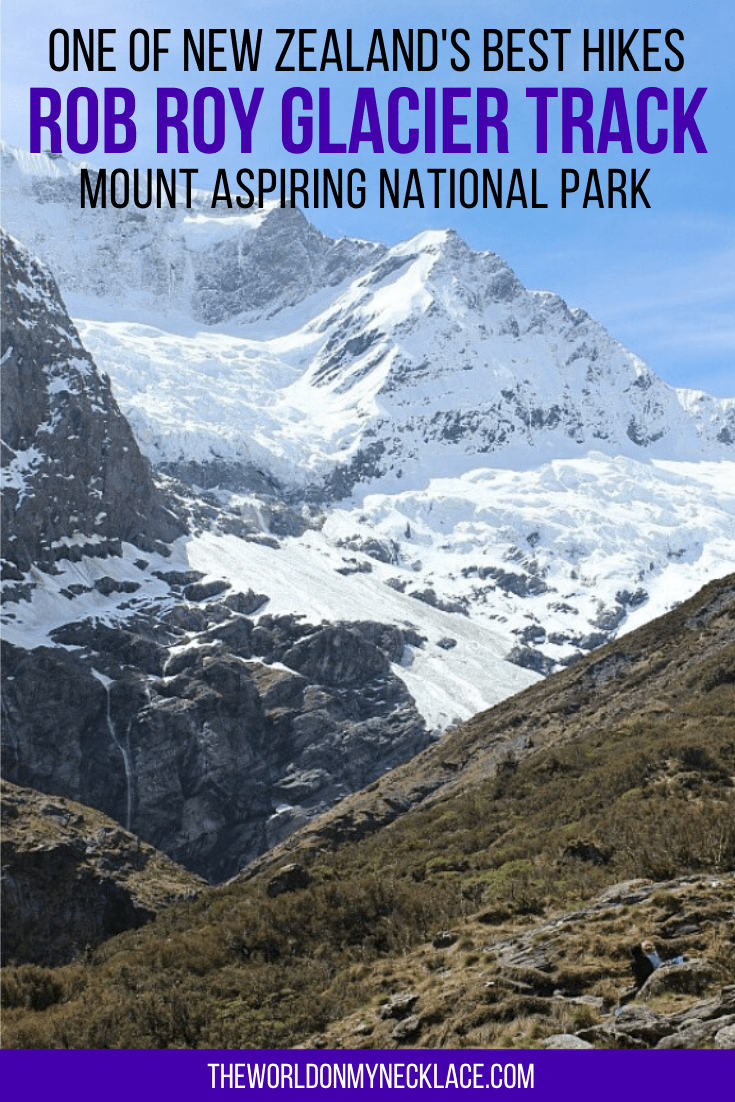