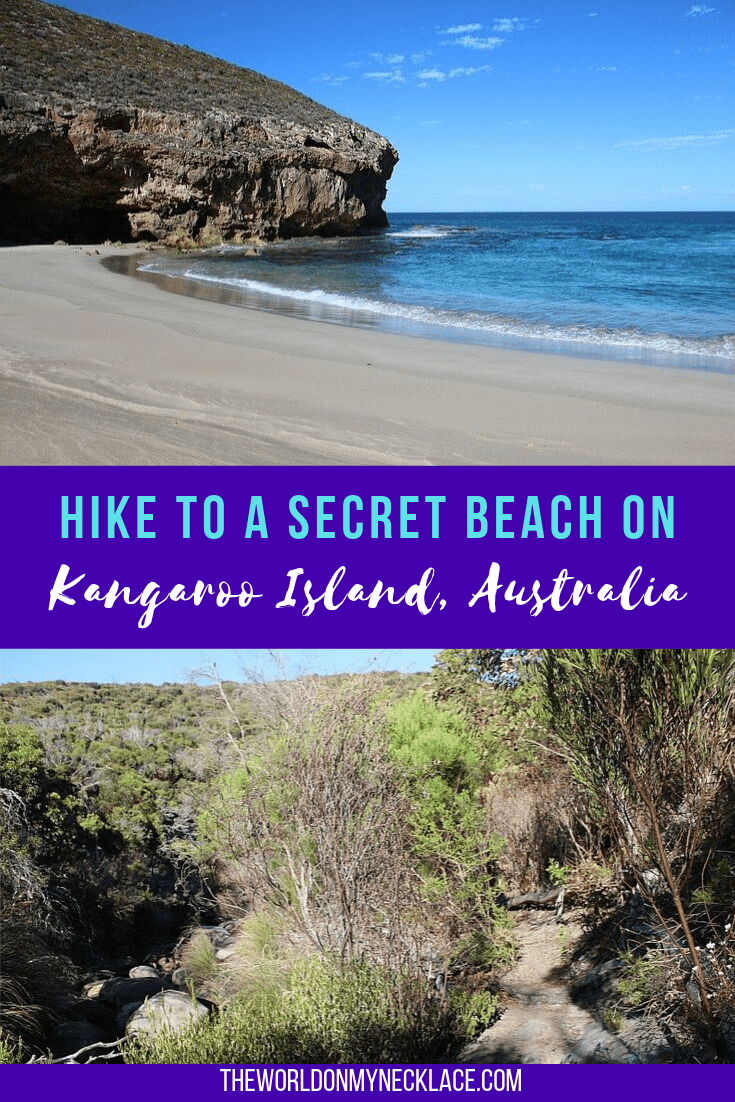 If you are planning to go hiking on Kangaroo Island, then you should definitely do the Ravine des Casoars hike to a beautiful and secluded beach! Read on to find out more.

I fully believe that the best way to experience the natural beauty of a place is to go hiking, there is simply no better way to immerse yourself in nature and to wholly appreciate your surroundings.

There are a couple of multi-day hikes that looked amazing and if we had more time I would have loved to tackle one of them, but as we only had two days in total on the island they just weren’t feasible. There were so many other things we wanted to do as well as hiking.

Luckily there were a number of shorter Kangaroo Island walking trails too. I read about the Ravine des Casoars and the 7km return hike through the ravine to a remote beach and it sounded like the perfect Kangaroo Island wilderness trail. 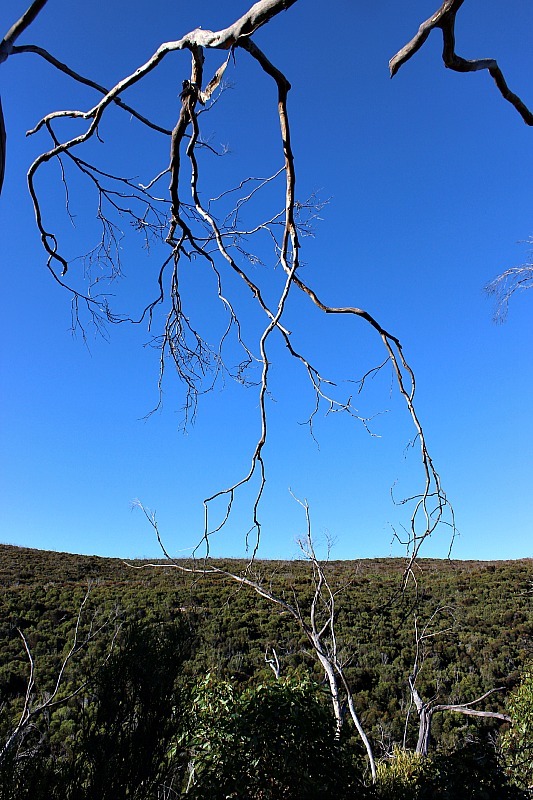 The Ravine des Casoars Wilderness Protection Area is located near where we were staying in an old lighthouse keeper’s cottage at Cape Borda, on the largely uninhabited western side of the island.

The ravine was named by Nicolas Baudin, a French Explorer who mistook the now extinct Kangaroo Island Emu for another large Australian bird the Cassowary when he discovered the Ravine on his 1800-1803 expedition to map the coast of Australia.

I had read online that this Kangaroo Island walk was meant to be difficult with steep inclines and an uneven trail but after fire damage to the area in 2007, the trail was rebuilt and it is now more gentle with fewer inclines. It was also shortened by a kilometer.

We set off early from our cozy cabin to drive the rocky road to the Ravine des Casoars car park where the hike begins.

The trail began in thick native bush where a number of spider webs blocked our pathway, as we were the first people on the trail that morning. I found a large stick which I held out in front of us to break the webs as we walked.

Believe me, you don’t want to walk into spiderwebs in Australia. 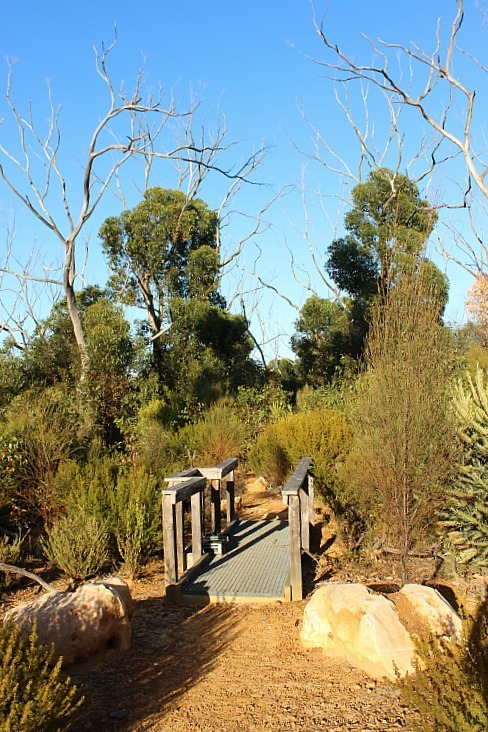 The trail was surrounded by large trees where we saw flocks of black cockatoos nesting in the branches. We could hear kookaburras chattering in the distance, their calls like the laughter of a madman.

Rounding a bend we came across a large black tiger snake, which is indigenous to the island, coiled in the middle of the path. I only caught a glimpse of it before we both jumped back but it was the largest snake I have ever seen in the wild. It definitely got our blood pumping!

We weren’t sure what to do as it was completely blocking our path so I threw the stick in its direction and luckily it quickly slithered away. After living in Australia for over a year, I have seen many spiders but this was my first snake.

Moving on cautiously, the trail started slowly descending into the ravine as the thick brush opened up to views across the ravine. It was a gentle slope and the trail switch-backed till we got to the river at the bottom. 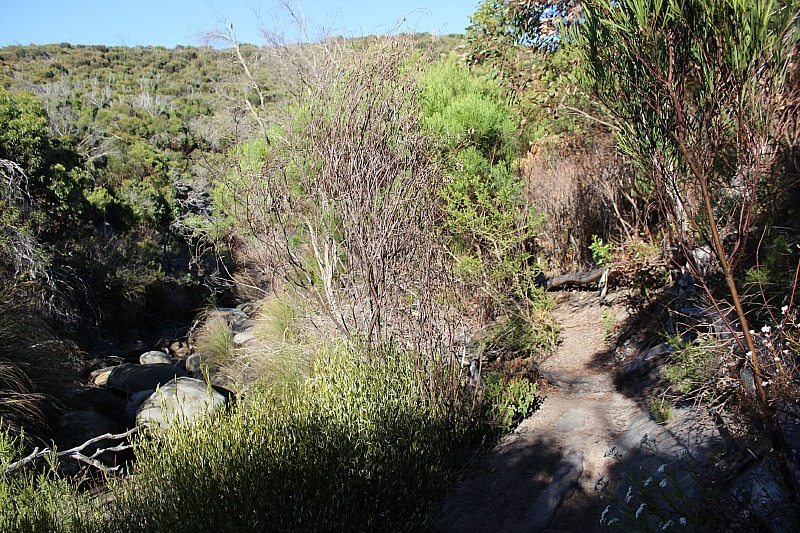 Following the river for a while, the bush suddenly stopped and the sand started. We crossed over a lopsided bridge that spanned the now sandy riverbed. A kangaroo was busy digging in the wet sand, making itself a cool hole to sit in to escape the hot day. 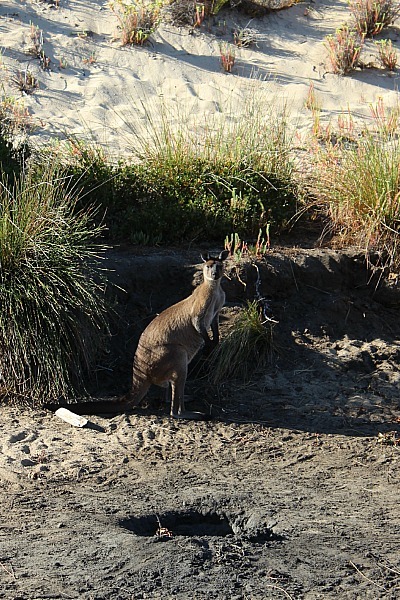 Walking over the hot sands, we were surrounded by a headland on both sides with sand dunes reaching upwards on each side of us. The sound of crashing waves became louder until we caught sight of a beautiful beach with pale blue water and not a soul on it.

A large sea cave sat at the southern end of the beach where we sat on low rocks, looking out on the heavenly beach. It was cool and damp in the cave; a welcome respite from the sun. 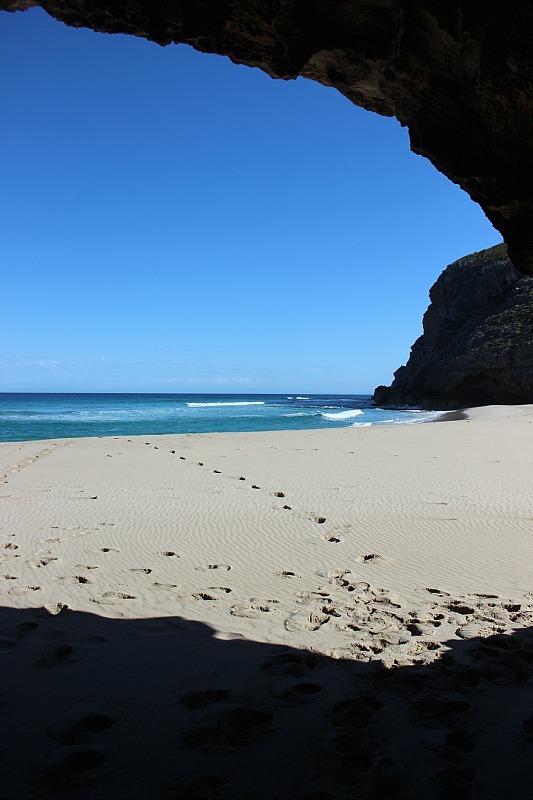 Leaving the car in the morning, we didn’t think about packing our swimsuits as it was still quite chilly but now the day was hot and I wanted to get into that perfect looking water.

We hadn’t encountered any other people during our hike and you could see anyone coming from about 800 meters away from the beach.

So we decided to skinny dip.

I have never really done it before and it felt weird to strip off at a beach in the brilliant sunshine, but it was also exhilarating.

We took one last look from the cave towards the trail and with still no sign of anyone, we rushed into the waves. 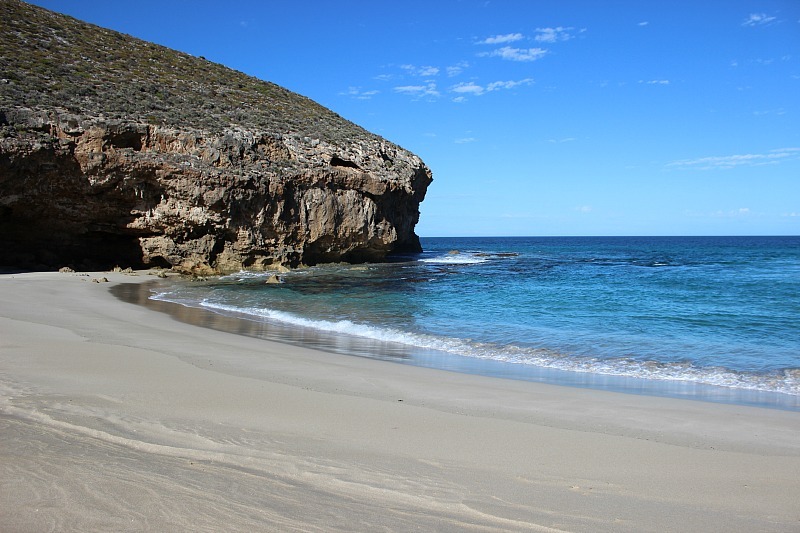 I can see why some people choose to be nudists. It is such a beautiful, natural feeling to swim in the ocean and feel the water against your skin. Doing it nude heightens the experience.

After a quick glance back to the trail, we ran out of the water and back into the cave where we reluctantly put our clothes back on after drip-drying for a couple of minutes and feeling the cool wind on our skin.

It is definitely something I would do again.

As we left the beach, a seal was surfing in the waves just off the coast. It all felt a bit unreal.

The trail seemed to take less time on the way back, I find that with most walks I do. The kangaroo was still digging its hole but jumped away warily when we passed, watching us for a couple of minutes before hopping back to resume his digging. 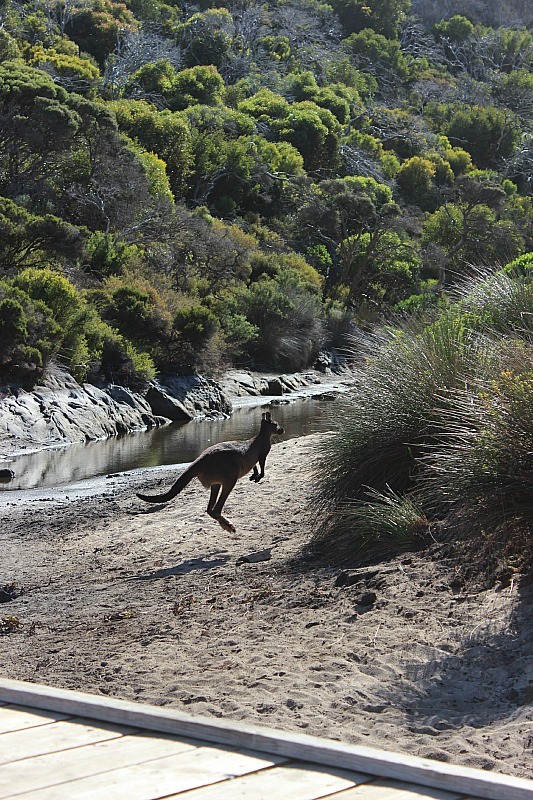 Getting back to the car, the car park was still deserted. The trail had been solely ours on this late summer’s day, as was the beach. A true wilderness walk to a private beach.

Our secret place at the edge of Australia and one of the best Kangaroo Island trails to hike if you don’t have a lot of time.

Where To Stay on Kangaroo Island

A great budget option for accommodation is to camp on Kangaroo Island. There are numerous campsites around the island, including Vivonne Bay, Emu Bay, Kingscote, and Stokes Bay.

If you would rather rent a vacation home, here are my pick of the most highly-rated, affordable, and well-located homes:

The Best Travel Insurance for your Kangaroo Island Trip

Make sure you get travel and health insurance before your Blue Mountains trip, just to be on the safe side. Safety Wing is my go-to and they are cheap and easy to claim with. 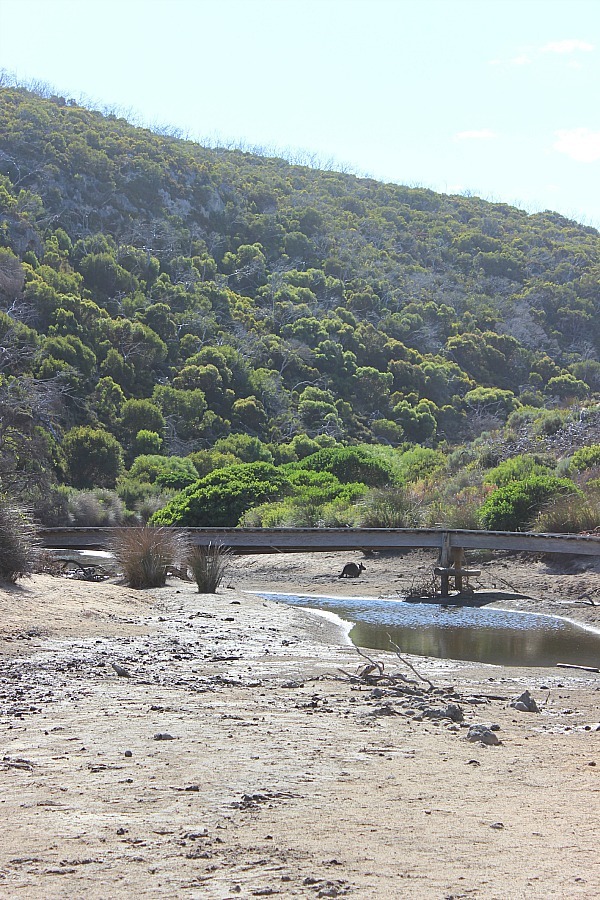 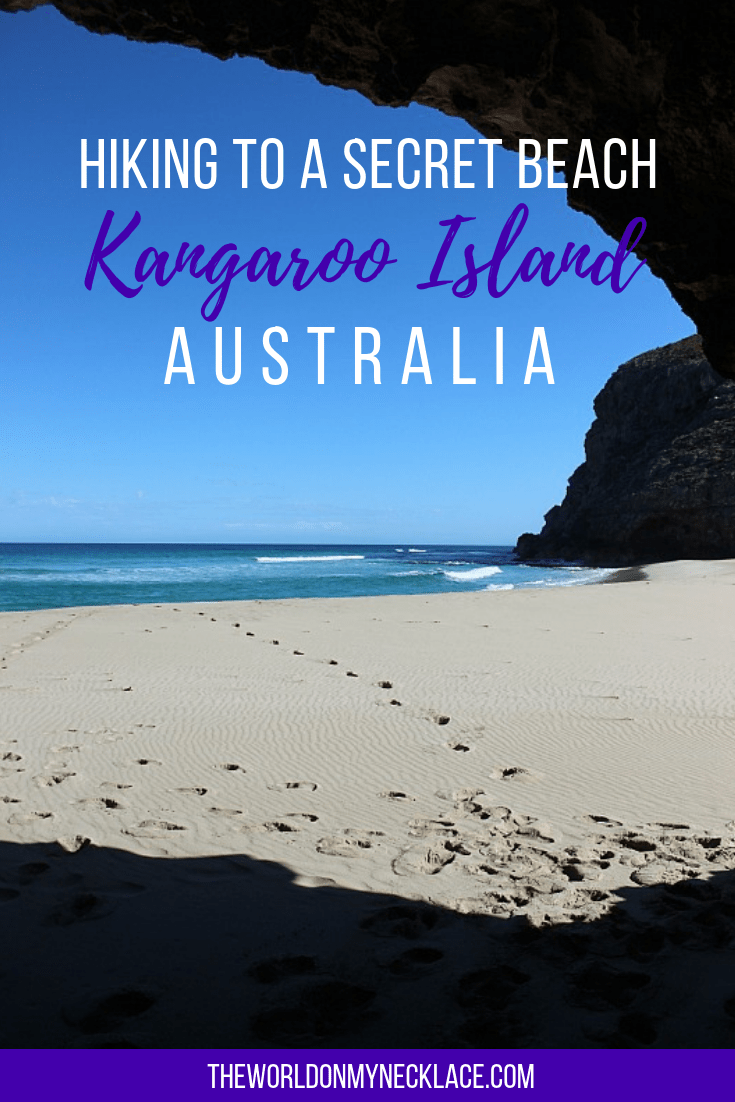 14 Comments on Hiking on Kangaroo Island to a Secluded Beach