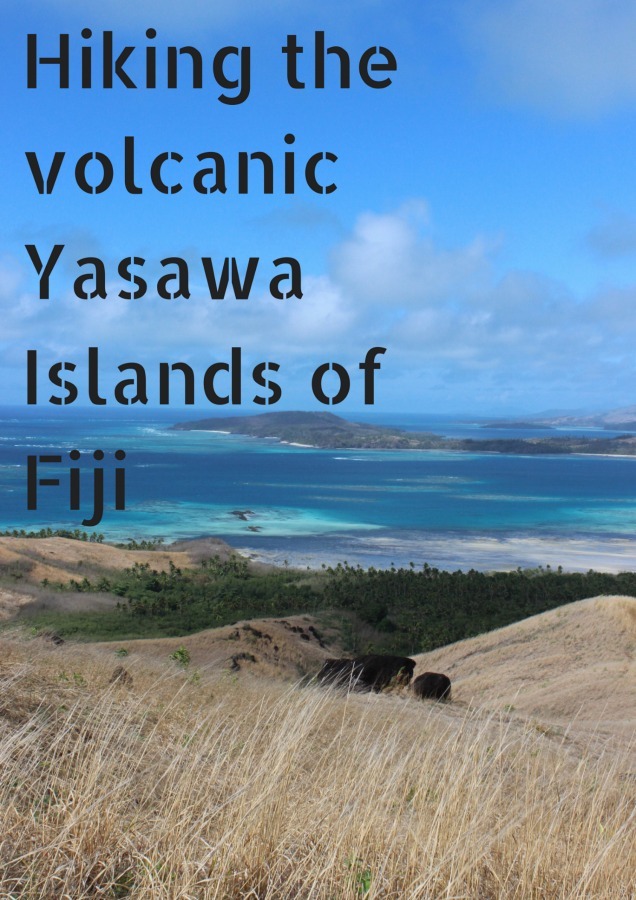 Fiji may not be the first place that you would think of when considering a hiking destination. You just lie on the beach in Fiji right?

Wrong. Well, not wrong as it IS the perfect place for beach lounging, but there is so much else you can do in Fiji, including hiking the volcanic peaks of the Yasawa Islands.

This is by no means a definitive guide of the hiking trails in the Yasawas as there are approximately twenty islands that make up the chain and I only visited two of them. I am no expert. I just wanted to share my limited experience hiking a few different trails while we were there.

Hiking on Nacula Island in Fiji

On our first full day at Blue Lagoon Resort on Nacula Island, we decided to go for a morning walk to a secluded beach, only twenty minutes away. There are only a couple of trails from the resort, one going up to a mountain peak and the other to the nearby beach.

We planned to do the free guided hike up the mountain the next day so we were left with the beach hike.

I had wanted to walk to two resorts that were further around the southern end of the island from Blue Lagoon, Nabua Lodge and Safe Landing, but we weren’t sure how to get there and how long it would take.

Following the path through a dry mangrove swamp, we saw massive holes dug by crabs in the dry earth. We passed mango trees and coconut palms and crossed a few rickety log bridges that would help to keep your feet dry if there had been any water in the dry stream beds.

We reached the beach at low tide and the water had receded so far we could barely see it. A massive field of mud flats stretched out in front of us. A man and a woman rounded the rocky point to our left, walking towards us. We decided to walk along the beach in the direction they had come from as we weren’t ready to head back after such a short walk. Walking across the muddy sands, we dodged the black volcanic rock that jutted out of the sludge. Hermit crabs ran away from the sounds of our footfalls.

We rounded the bend and walked along another long stretch of coastline until we reached a small island that was connected to the beach at low tide. There was a young backpacker walking to the island from the other direction and as we got closer, I saw some buildings set back from a beach further around the point.

I asked him where he was coming from and it turned out we had walked to Nabua Lodge. It only took us 45 minutes to walk there from Blue Lagoon. The beach in front of Nabua Lodge didn’t compare to the perfect sands in front of Blue Lagoon and the accommodation looked a lot more basic.

Walking past a small tea house that is known for its freshly baked cakes (unfortunately not open when we went past), we took the path up a small hill to the neighbouring Safe Landing Resort. Safe Landing is a cute Bure village on a gorgeous beach. It still isn’t quite as beautiful as Blue Lagoon’s tranquil cove, but beautiful nonetheless. I saw a sign at the edge of the grounds for the Old Village, intrigued we followed the path through a beautifully overgrown cemetery with aboveground white concrete tombs, and up to the top of a promontory of land sticking out into the ocean. The view from the top was stunning. We could see further along the coast to a Fijian village and there were locals collecting some type of seafood from around the reef.

When you think there can’t possibly be even more shades of light blue on the planet, you see the view from above Safe Landing and you realise that Fiji is just getting started. It truly is the land of vibrant turquoise tones. It was hard to tear ourselves away from our peaceful vantage point but we decided we had better head back before the tide was high, making the beach impassable. The next morning after breakfast, we joined our local guide for a short hike up the nearby mountain summit for more spectacular island views. It was a really windy morning, but thankfully not cold.

We hiked through the jungle for a short time before the path rose in elevation and we found ourselves slowly making our way up sloping hills of dead grass with black rocks emerging from the dry earth. Stopping a couple of times for people to catch their breath, the view kept getting better and better. Like the day before, there were commanding views of the multi turquoise shades of the surrounding ocean and hidden bays along the eastern coast of the island. There weren’t any trees on the mountain tops, just the yellowed grasses and low shrubs. After taking many, many photos, we completed our hike by making our way across a ridge then looping down the other side of the peak and back through the jungle to Blue Lagoon.

It was a fantastic hike but shorter than we would have liked at only one hour return. Later in the week we hiked the trail to the peak again, but continued along the trail to another peak higher up, which had even better views of the rest of the island.

The overcast day toned down the array of colours and gave the island a feeling of desolation. It felt like we were at the end of the world, and I liked it.

Small birds hovered above us, waiting to eat the bugs that we disturbed as we walked. The wind nearly pushed us over the steep drop a few times, so we were sure to take each step slowly and carefully.

Once at the highest point of our hike, we could see the traditional village around the coast from Blue Lagoon that we had visited the previous day. The chain of mountains continued to the northern tip of the island. It looked as if there were trails crisscrossing the whole island. I would have loved to spend a couple of days walking them and camping out under the stars but I don’t think that you are allowed to. We didn’t have the gear anyway.

Nacula Island was a great place to do some small scale hiking and I think that we got a more in depth feel for the island by walking a few of its rugged trails.

Hiking on Barefoot Island in Fiji

Our second island, Drawaqa or ‘Barefoot’ Island, was a lot smaller than Nacula. It was so small in fact that we kayaked around it one day and it only took us a little over an hour.

There was only one hiking trail on the island, to the top of a peak, which was about forty minutes hike each way. The landscape was dry and yellowed like it had been on Nacula Island. As we left the Barefoot Island Resort and the trail started to slowly gain in elevation, we saw some startled goats including two babies.

There is nothing cuter than a baby goat. I was hoping to get closer but they were terrified of us and ran off, bleating loudly. We reached the first lookout point relatively quickly and stopped to catch our breaths. Despite it being an overcast day, it was stiflingly muggy and we were already dripping with sweat from the mild exertion. We could see over to Mantaray Island on our left and Naviti Island loomed large on our right. The usually vibrant colours of the Pacific were muted with the grey sky backdrop, but the view was still beautiful. Continuing on, we walked through a forest of green and along a ridge until we couldn’t walk any further. We were really hoping that we would find an ‘unofficial’ trail to get to a beach at the other end of the island that we had seen from the boat, but alas it wasn’t to be. There was only a steep drop off into the forest below. We had to turn back and hike the way we came.

It didn’t turn out to be the most exciting hike, but there were some decent views and it felt good to stretch the legs.

So Fiji may not be high on your list for a hiking holiday, but if you do find yourself there for the brilliant beaches, make sure you leave the white sands to explore some of the trails, if only to help work off the three course meals.

If you think that the water is stunning from the beach, you will like it even more from a higher vantage point.

There is nothing like the view over turquoise waters from above. 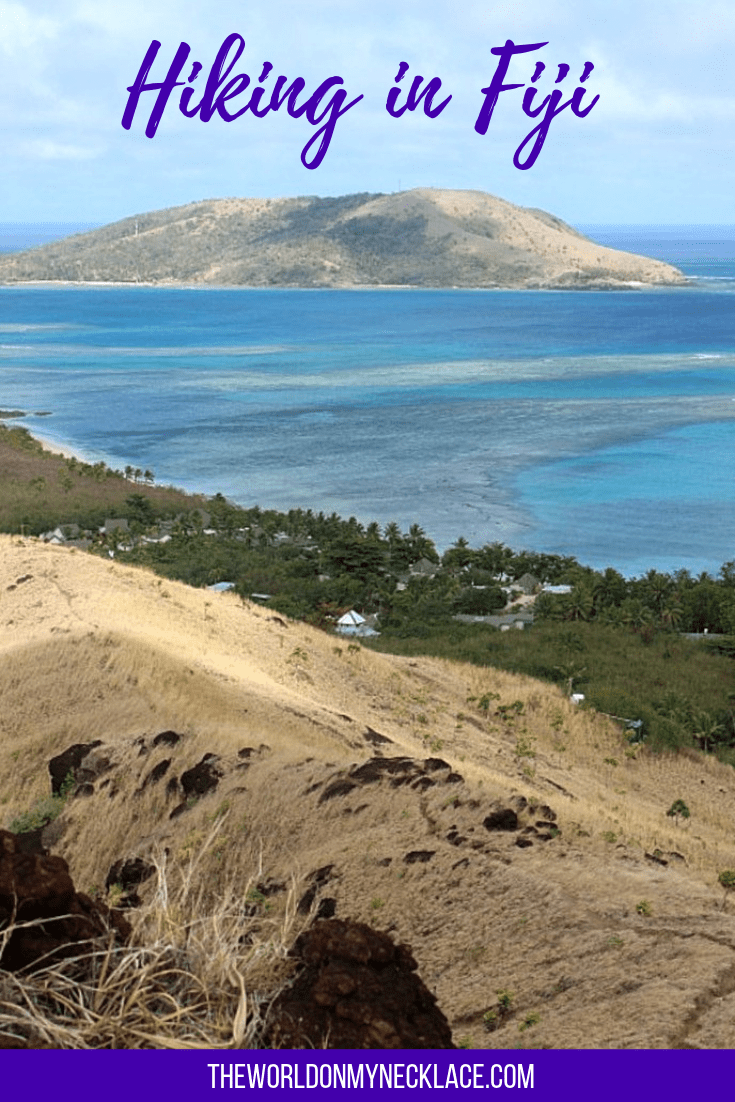 11 Comments on Hiking in Fiji: Why you Should Hike the Yasawa Islands