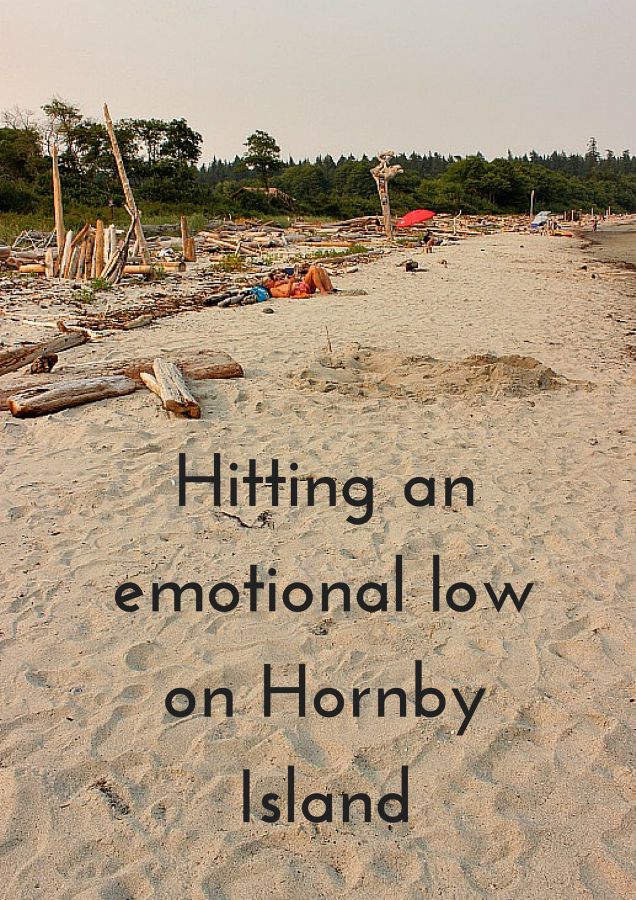 My time on Hornby Island should have been different.

I envisioned laying on the famous white sand beach and swimming in the clear waters of Tribune Bay. Hiking through the temperate rainforest and enjoying carefree summer days on a beautiful island paradise. Unfortunately my experience there couldn’t have been further from what I imagined.

It wasn’t Hornby Island’s fault that my experience there turned out to be so emotionally scarring. Maybe my little breakdown was bound to happen anyway, no matter where I was. All I know is that Hornby Island turned out to not be a good place for me.

Let me start from the beginning.

Hornby Island is one of the Northern Gulf Islands and is located in the Salish Sea between Vancouver Island and the mainland. A popular getaway for Vancouverites, the island is known for it’s fine white sand beach and warm waters; not common in these parts.

I booked a couple of nights at a Hornby Island camping ground right by the beach at Tribune Bay. The photos I had seen looked amazing and I was so excited that I was finally getting to visit. My expectations were sky high. This is never a good thing. 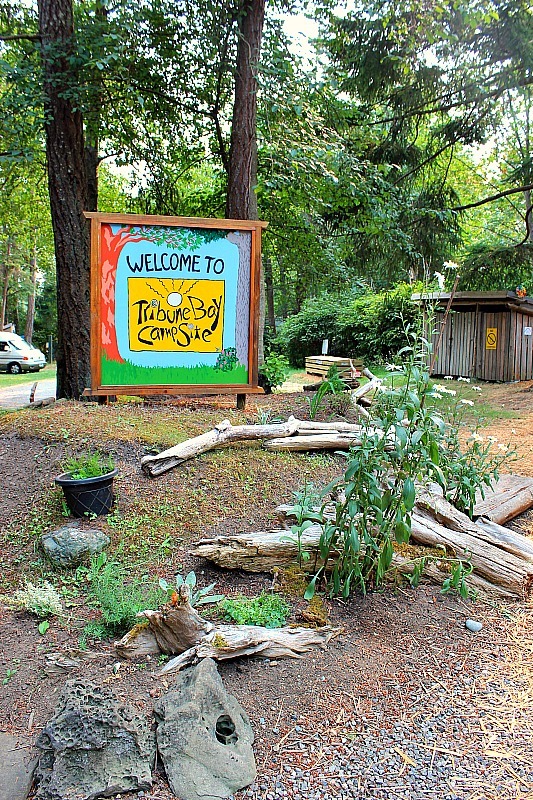 My long journey to Hornby Island started with an early wake up call in Vancouver then involved a train into the city, a bus to Horseshoe Bay then a ferry over to Nanaimo on Vancouver Island.

Smoky skies from the many British Columbia wildfires lent a weird almost sinister edge to the day. I was exhausted by the time I got to Nanaimo and a niggling sense of doom began to form. I tried to ignore it.

From Nanaimo I caught the Greyhound to Buckley Bay then the short journey on the Denman Island ferry to Denman Island. And from there I had to do what I was dreading the most: hitch. I am fine when hitching rides with someone else, like when Trav and I hitched during our super budget 2013 Canada trip, but it isn’t something that I am comfortable doing when travelling alone. I knew that if I wanted to visit Hornby Island that I would have to hitch as there are no buses on either Denman Island or Hornby. So I just had to suck it up.

I started walking up the quiet road from the ferry to Denman Island’s small town centre. By the time I had walked off the Denman Island ferry and crossed to the right hand side of the road, all of the cars disembarking the ferry were already gone. Just past town I got a ride with a local lady who dropped me about half way to the Hornby Island ferry.

I walked along the shoulder of the long stretch of road through long grass and wild flowers. Hornby Island was visible offshore to my left. Another ride with a friendly guy who had a summer house on Denman took me to the Hornby Island ferry. I was nearly there with just one ferry and another 10km of hitching to go.

I befriended an older lady that was waiting with her husband to board the Hornby Island ferry. They offered me a ride to Tribune Bay and I gladly excepted.

I had been travelling for 10 hours when I finally walked into the Tribune Bay camping ground. 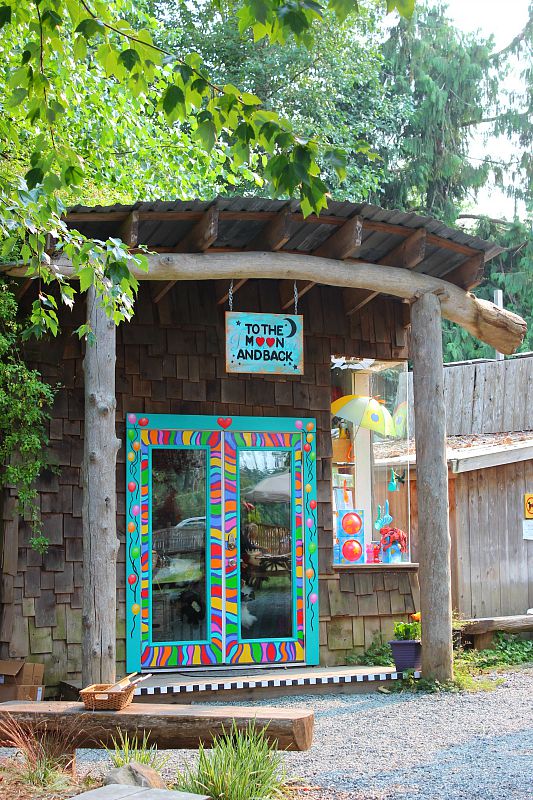 Road weary but happy to finally be there, I started to assemble my tent, the first time I had ever done so. One of the two poles was broken – the elastic holding the collapsible poles together had snapped.

I managed to stretch the remaining elastic through all the pole segments but one and continued with trying to put together my tent. Then when I was trying to force the other pole into its slot it snapped. Two out of two poles were now broken.

I started to feel really desperate now but struggled on, wrestling the broken parts into something that resembled a half deflated parachute, only a little bigger than a person and as claustrophobic as a coffin. My home for the night.

The sense of doom that been hanging around me all day had now settled upon me.

Surrounded by happy families that didn’t even know I existed made me feel so completely alone, more so than I can ever remember feeling before. A darkness gripped me and I couldn’t hold off the tears anymore. I began to cry and didn’t really stop for the next 12 hours. I felt hysterical and out of control, helpless and hopeless.

What the hell was wrong with me?

There was no WiFi at the camping ground and the only cafe nearby that offered it was closed for the day. I couldn’t talk to anyone to make myself feel better. I wanted to ring Trav so badly but I was alone in this. There was no one that could help me.

The island felt like a prison. I was so far away from the people that care about me and I couldn’t stand it.

Why was I doing this? I just wanted to go home to Trav and never travel without him again. I was adamant that in the morning the first thing I would do was change my flights. The thought of continuing on with my travels was daunting. Instead of feeling excited that I would be flying up to Alaska soon, a dream of mine, all I felt was dread.

I had to leave the campground to get away from the sad and depressing sight of my failed tent. I bought a simple dinner at the Co-op then headed down to the famous Tribune Bay beach. 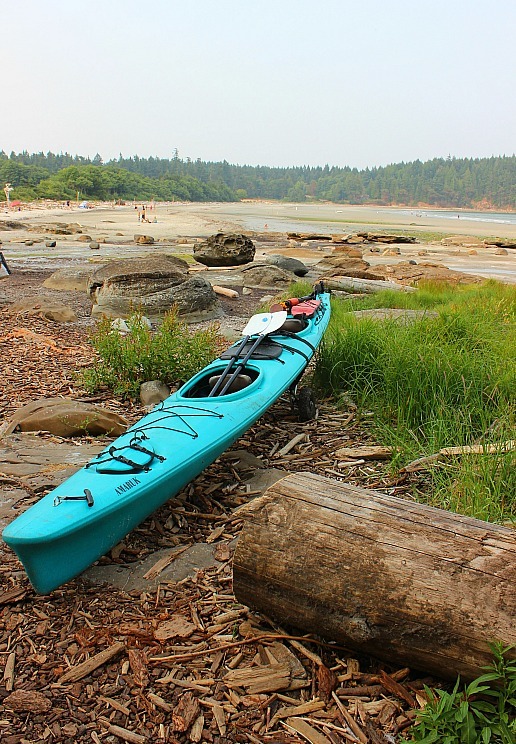 The tide was out and the beach was smelly and seaweedy. Mud sucked at my feet as I walked to the tiny strip of white sand that was littered with driftwood and dry kelp. A dead seal lay rotting on the sand, a massive hunk torn out of its neck and dried blood splattered around it’s remains. This was not at all what I was expecting. 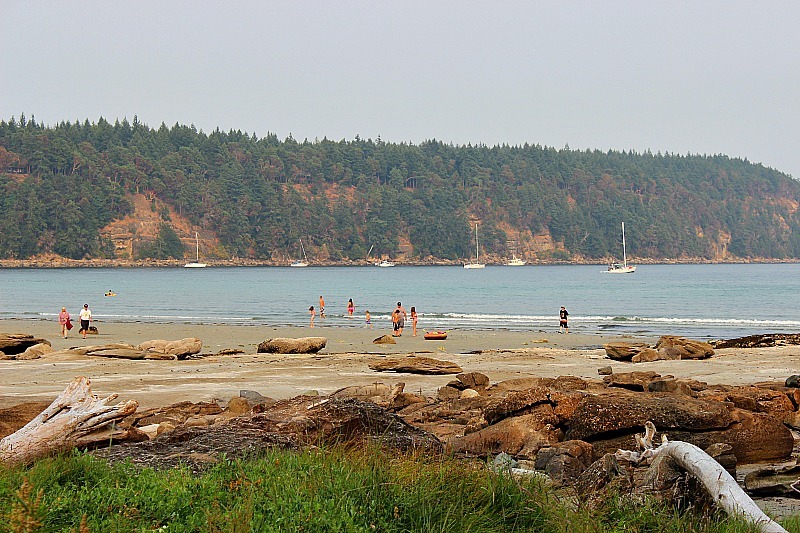 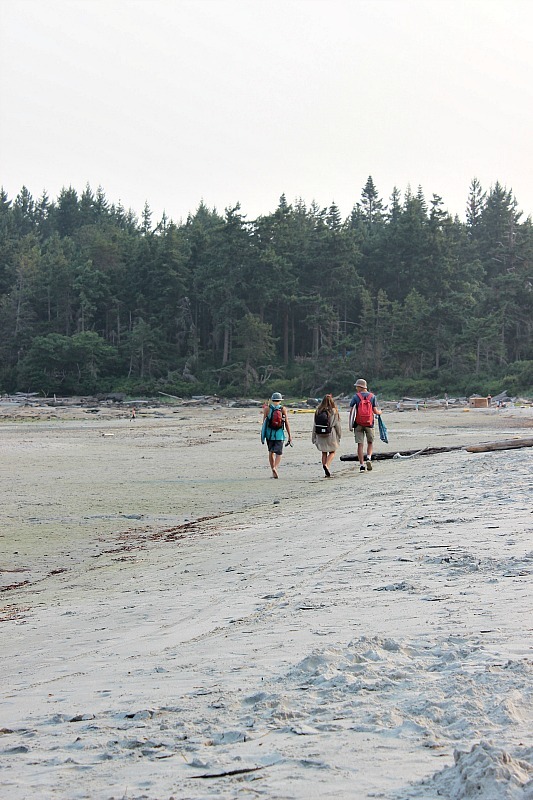 I sat forlorn on a log full of spiders and ate my pathetic dinner of crackers with tomato and cheese. I felt numb. I watched the sun begin to set and didn’t know what to do with myself. With no other options that I could see, I headed back to my tent.

After a sleepless night of endless crying and being constantly frightened at every noise I heard outside my tent, I emerged into the sunshine feeling exhausted and deflated, but glad that I survived one of the worst nights of my life.

Sunshine streamed through the window at Jan’s Cafe in the tiny village-like Ringside Market. After coffee and a cooked breakfast I started to feel a bit better.

As the cafe began to fill, the lady sitting at the table next to me said I could join her to free up space for incoming customers. Her name was Vanessa and we started talking. 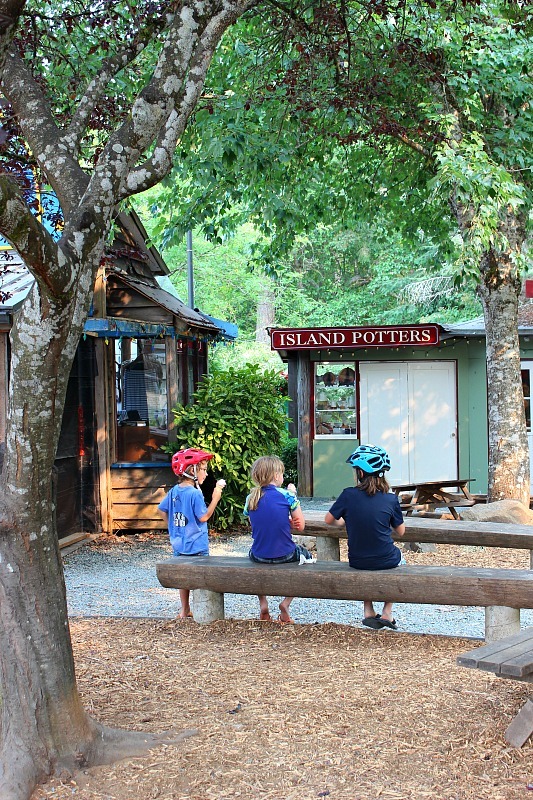 I needed to tell someone how I was feeling and she patiently listened to me. She convinced me it would get better and that I need to hang in there. I wasn’t completely convinced but I clung to her words of reassurance like a lifeboat in rough seas.

If it wasn’t for her I would probably be back in Australia now, wishing that I had been stronger, that I had gripped onto my dreams with both hands and not given up at the first hurdle. Meeting her was very fortunate and she helped me immensely.

After breakfast I went back to Tribune Bay beach and I finally saw its beauty. It definitely wasn’t the white sand paradise I was expecting but it was beautiful in the way that a lot of Pacific North West beaches are: rugged and wild. 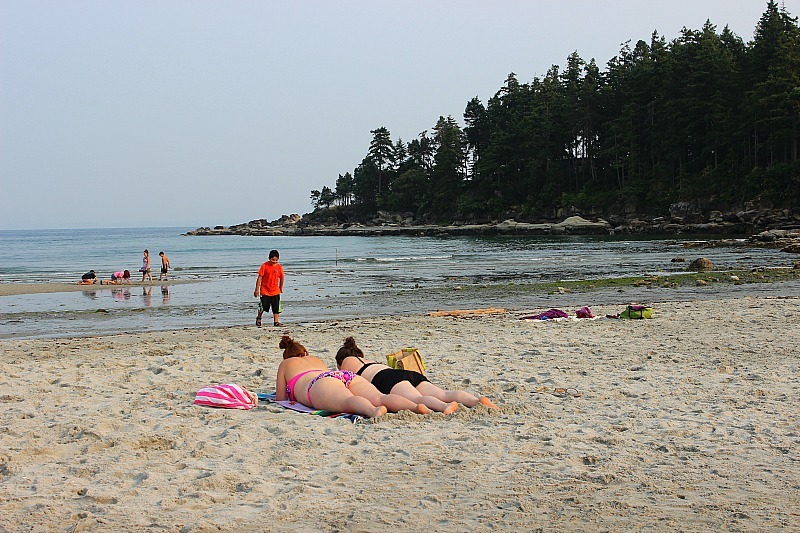 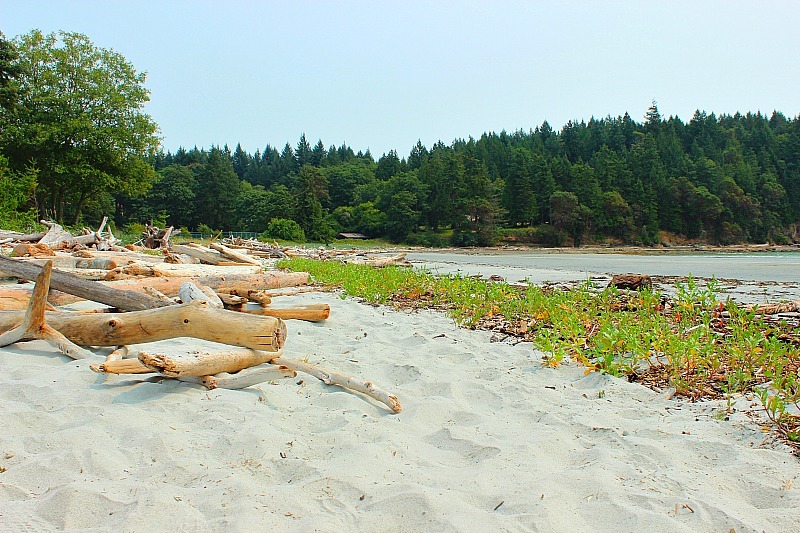 I was feeling more like myself. The hysteria had subsided and although I still felt sad, I was in control again. Maybe I could get through this and keep going after all.

I had lunch at the Ringside Market, a delicious and nourishing wild shrimp taco plate at Vorizo with homemade lemonade. My confidence was returning and I decided to walk to Whaling Station Beach, a few kilometres from Tribune Bay. Vanessa had told me about it and said it was her favourite beach on the island. 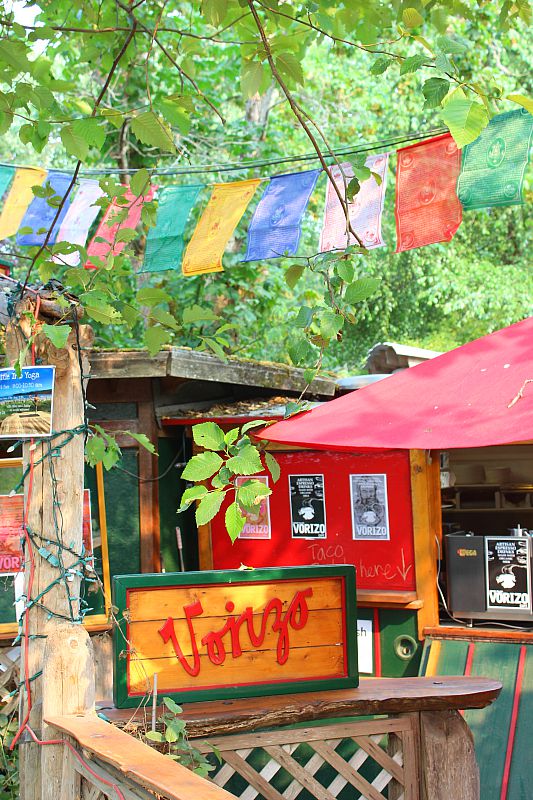 Walking along the wooded trail that ran parallel to the road, the cool forest started to work its healing charms on me. 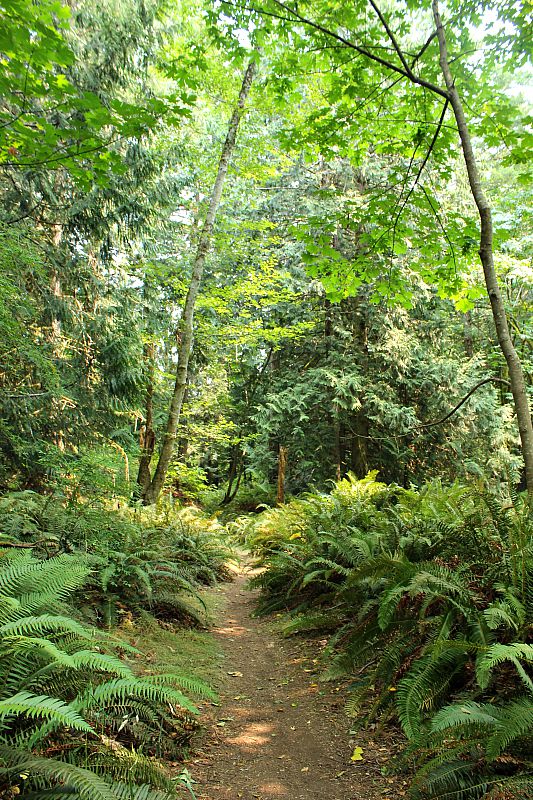 Whaling Station beach was much nicer than Tribune Bay in my opinion. The sand wasn’t blighted by seaweed and the water was calm and clear. I lay on the beach and read before paddling in the chilly sea.

It was a little taste of what could have been, if my experience on Hornby Island had turned out how I hoped it would and if I hadn’t had my mini breakdown. I am thankful that I at least got a taste. 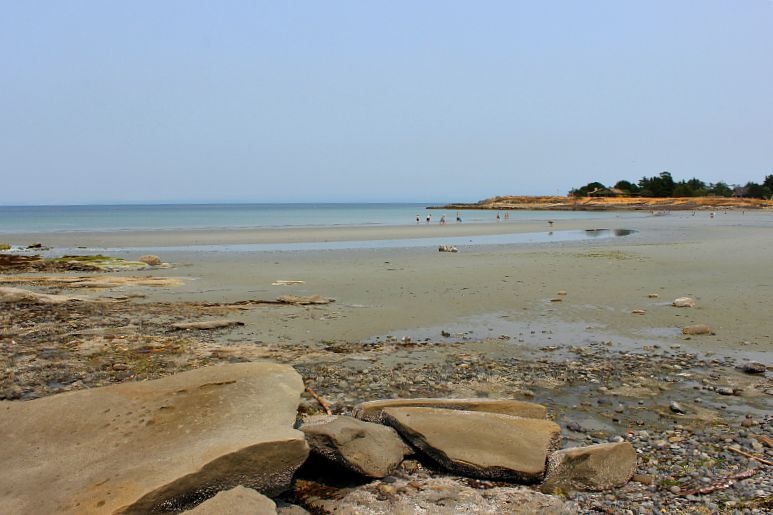 I decided to hitch back to Tribune Bay as I was hoping to hear back from my friend David on Denman Island to find out if I could arrive to stay at his place a day early. I couldn’t cope with another night in that claustrophobic tent.

Who should pick me up but Vanessa. She invited me to watch the sunset with them at Grassy Point. Maybe I would have gone too if I had decided to stay on Hornby Island but I still really felt the need to leave Hornby Island for Denman Island. I needed to put some distance between myself and the massive low of the previous evening.

Back at the market I spoke to Trav which helped with my fragile state of mind even more. I couldn’t get hold of my friend David on Denman Island and I couldn’t bear to spend another night in my broken coffin tent so I decided on a whim to book into the guesthouse in Denman Island village for the night.

I quickly packed up my things back at the Tribune Bay campground then managed to hitch a ride straight away to the ferry wharf on the other side of the island. Sitting in the sun while I waited for the Denman Island ferry, I knew I made the right decision about leaving a night early.

Hornby Island is a beautiful place but I needed to get away. Going back to Denman Island felt comfortable and familiar, like a home away from home. Exactly what I needed in my still fragile state. 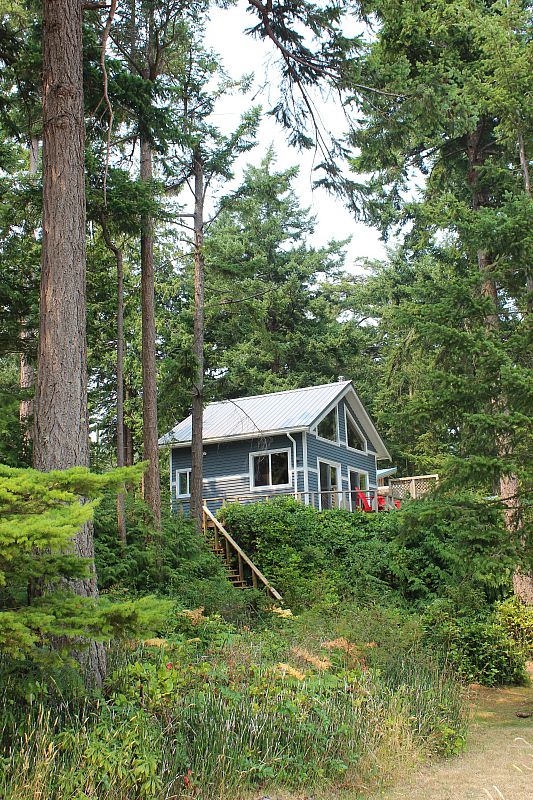 Maybe I will go back to Hornby Island one day to give it another shot and to see more of the island. In a different head space I think that I could really enjoy spending time there.

But I can’t shake the feeling that Hornby Island will always be the place where I lost my mind for an evening.

18 Comments on Hitting an Emotional Low on Hornby Island