Islands of the World, Massachusetts 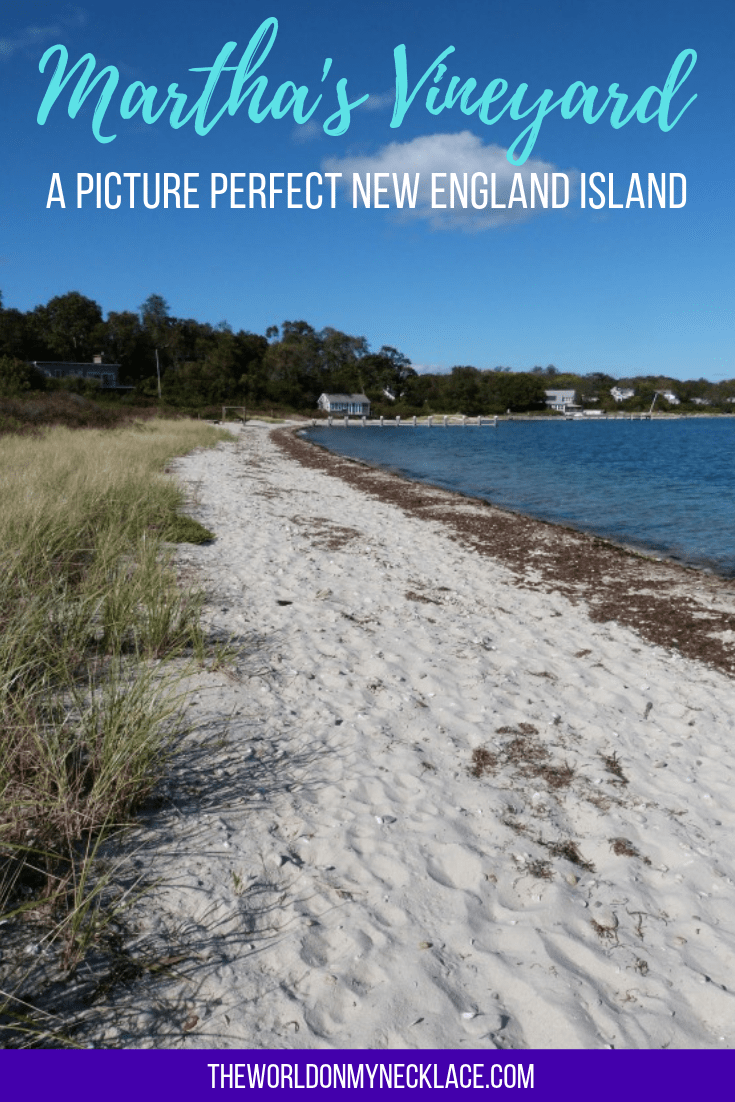 For me, it conjures up images of the Kennedy’s, windswept beaches, red and white striped lighthouses, bright red lobsters and beautiful yachts anchored off shore. A playground for the moneyed elite of America’s East Coast. 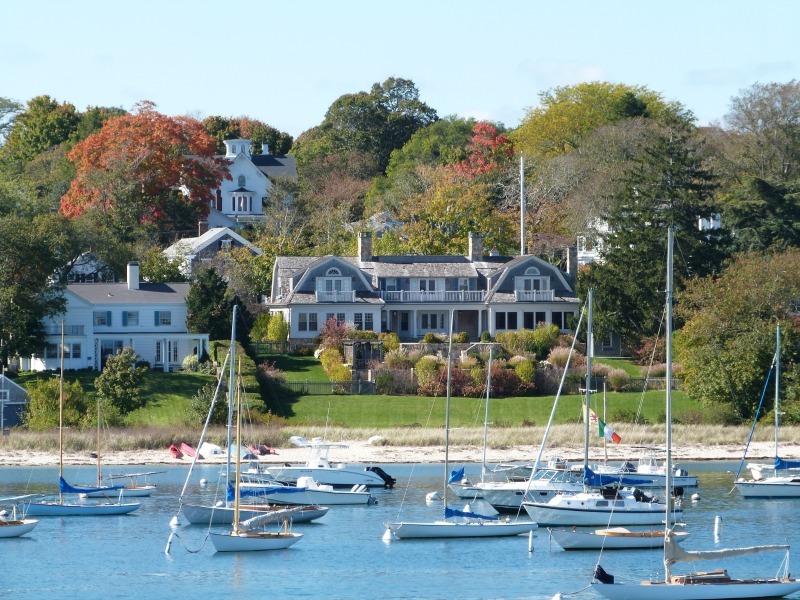 I was definitely intrigued by this glamorous island.

Also, as a lover of anywhere that is mildly maritime-y, Martha’s Vineyard placed very high on my list of places to visit when we spent a month on the East Coast of the US in Autumn 2012. 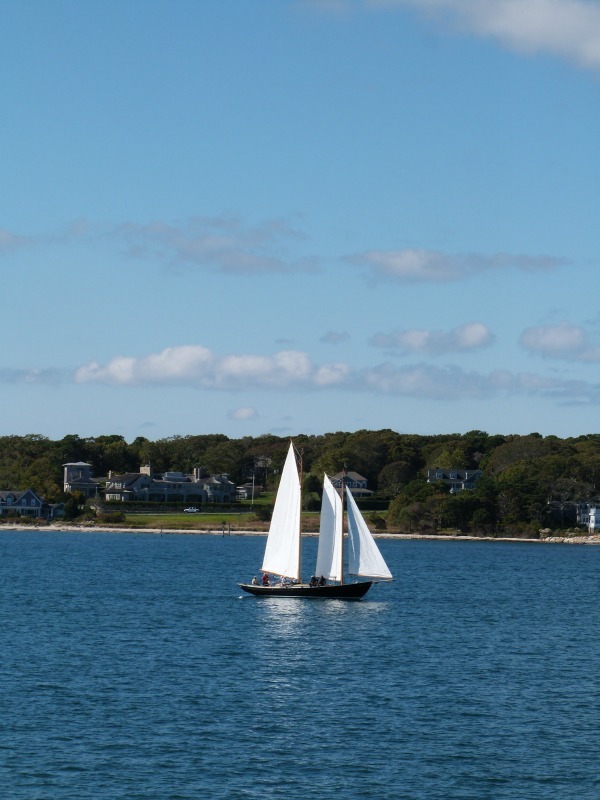 Martha’s Vineyard was originally the home of the Wampanoag, who were all but wiped out within a century of the first English settlement in the mid seventeenth century.

It was only in the nineteenth century that the island rose to prominence as a whaling center, along with the neighboring island of Nantucket.

When the whaling industry collapsed later that century after the discovery of petroleum, a much cheaper fuel source than the expensive whale oil, Martha’s Vineyard slowly developed into the affluent summer colony that it is today. 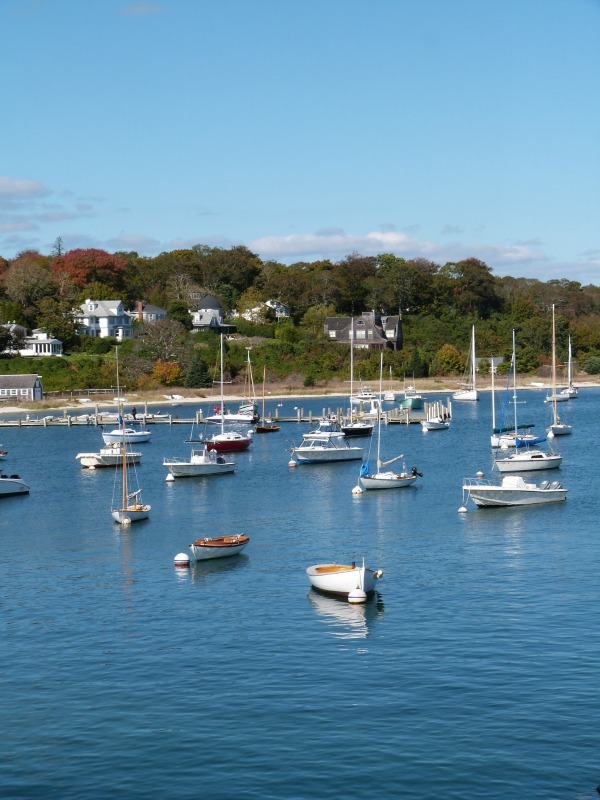 The island only has a year-round population of around 15,500 but that swells to over 115,000 in summer, a massive jump in numbers. At 100 square miles in size, Martha’s Vineyard is the third largest island on the East Coast and the largest island that is only accessible by boat or air.

Jaws was filmed here, with the parts of Chief Brody’s sons played by two local boys with a lot of other locals bagging roles as extras in the film.

After a frantic dash from the tip of Cape Cod to catch the 11 am ferry (we missed it and had to catch the next one), we were on our way to the island getaway for well to do East Coasters. 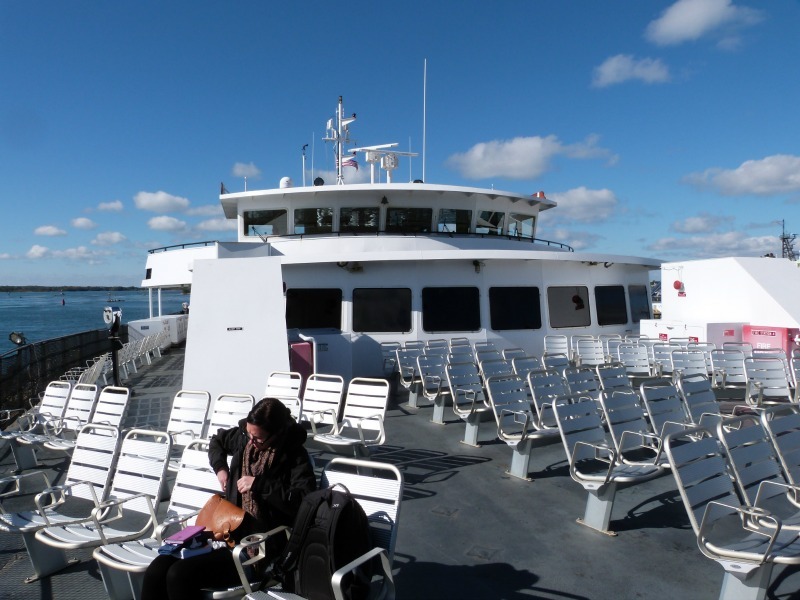 The ferry itself was a great experience. We sat on deck for the 45 minute ride and enjoyed the cool sea breeze. Seagulls surfed the air pressure wave from the ferry, gliding along effortlessly.

As we got closer to the island, we passed anchored yachts and pleasure boats in the sheltered waters of the harbour. 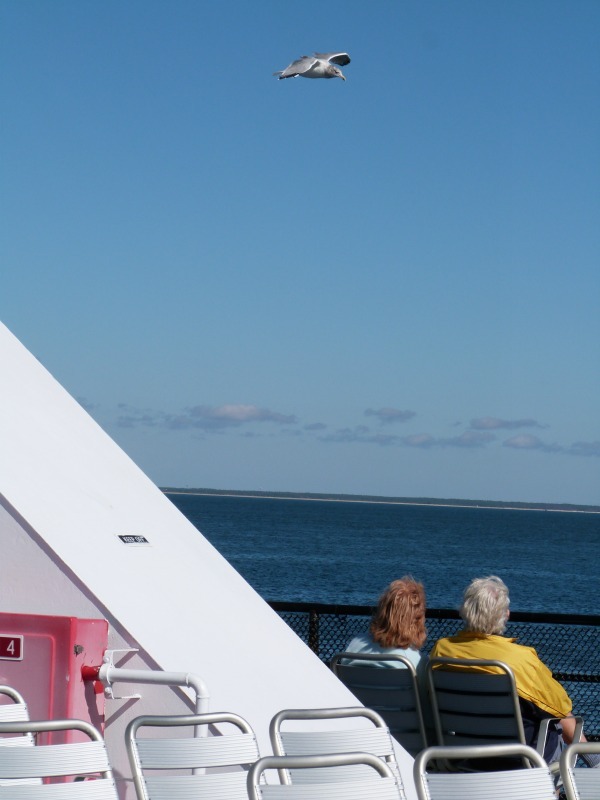 Wooden Cape Cod style houses with shingled A-frame roofs peeked out from the tree line on the low slung hillsides that were edging up from the still waters of the harbour.

Everything looked so perfect and serene. I would imagine it would be a very different story if we had been there a couple of months earlier, in the height of summer. 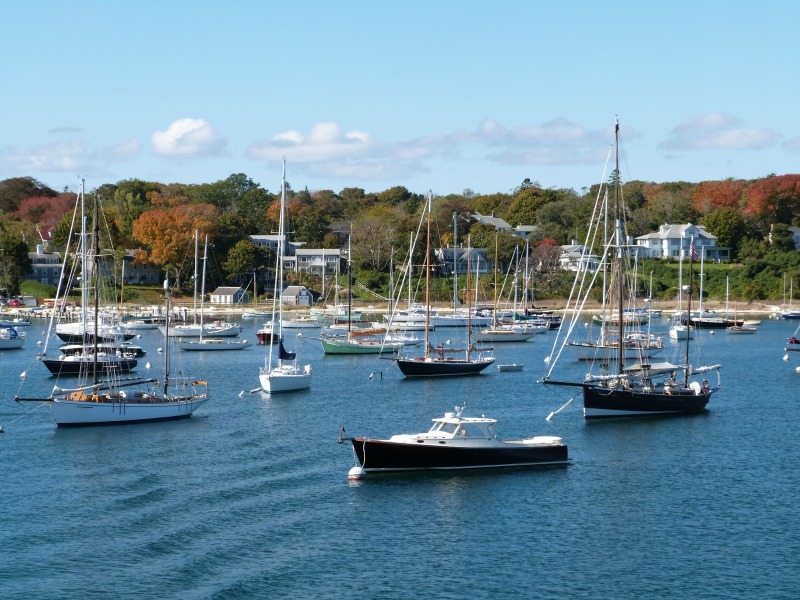 Disembarking the lumbering ferry in the township of Vineyard Haven, we wandered down the tidy main street. The street was lined with boutiques, old fashioned cafes and cosy gift shops, housed in tidy white houses with awnings and horizontal wooden panelling.

Old fashioned lamp posts lined the street, along with wooden planters full of colourful flowers. Decorated signs hung above doorways and the stars and stripes sprouted proudly from many buildings.

It was the picture of a perfect New England seaside village. 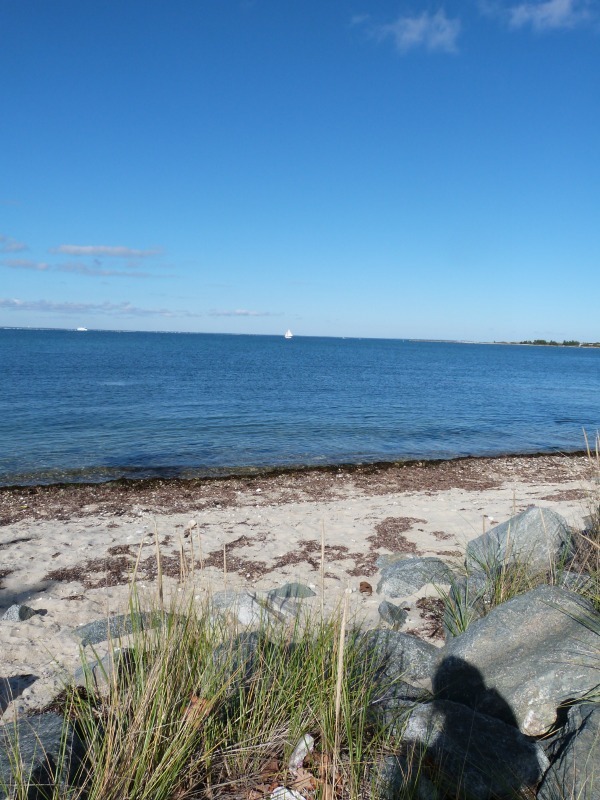 It all felt a bit too twee and a tad too shiny, but I loved it all. I think there is a 65 year old woman with a purple rinse inside me, just waiting to get out.

We ducked into the Marketplace café where I had the most incredible turkey chilli and cornbread for lunch. The chilli had large hunks of tomato through it and there was so much flavour, paired with the buttery cornbread it was lunch perfection. I still dream about it.

Full and happy, we went for a wander down to the beach, one of many beautiful beaches on Martha’s Vineyard. It was stunning. Yellow hued sea grasses, dried brown seaweed, brilliant white sand and aquamarine ocean. So many colours.

Along with the unseasonably warm weather, it felt like we were on a Caribbean Island rather than New England in Autumn. One of my biggest surprises from a month on the East Coast was how beautiful the beaches were. 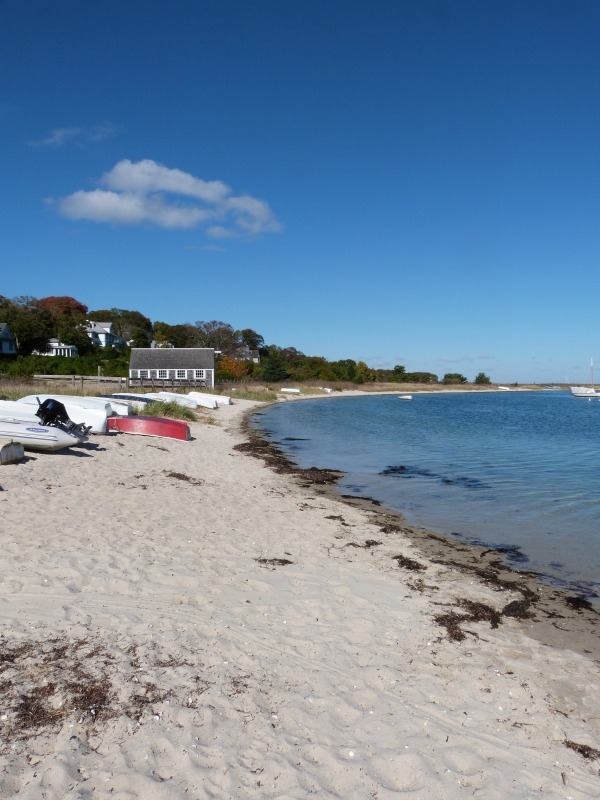 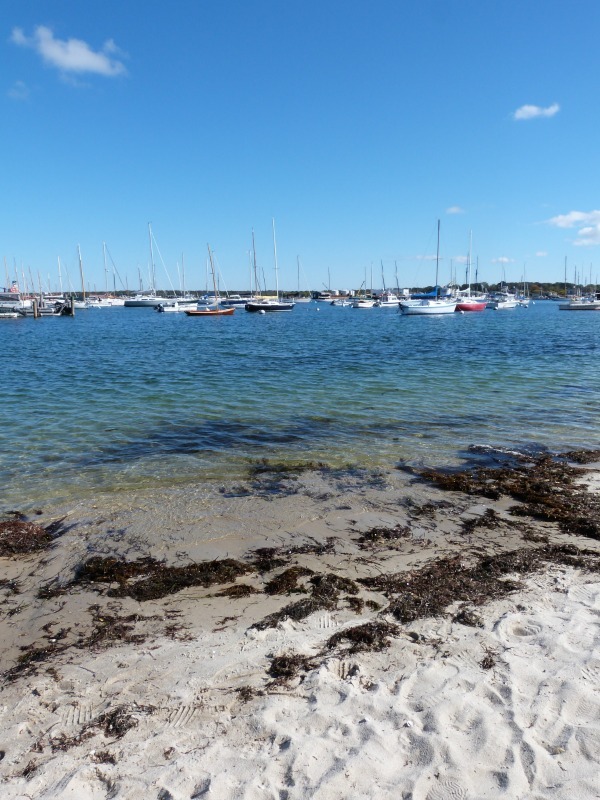 I sat on the wooden jetty where there were a few boats moored. There weren’t many people around, just a couple of boat owners. A friendly black dog joined me, putting his paw up on my lap.

He gazed up at me with his big brown eyes and my heart melted a little bit. His owner passed us on the way to his boat and said that the dog likes girls. 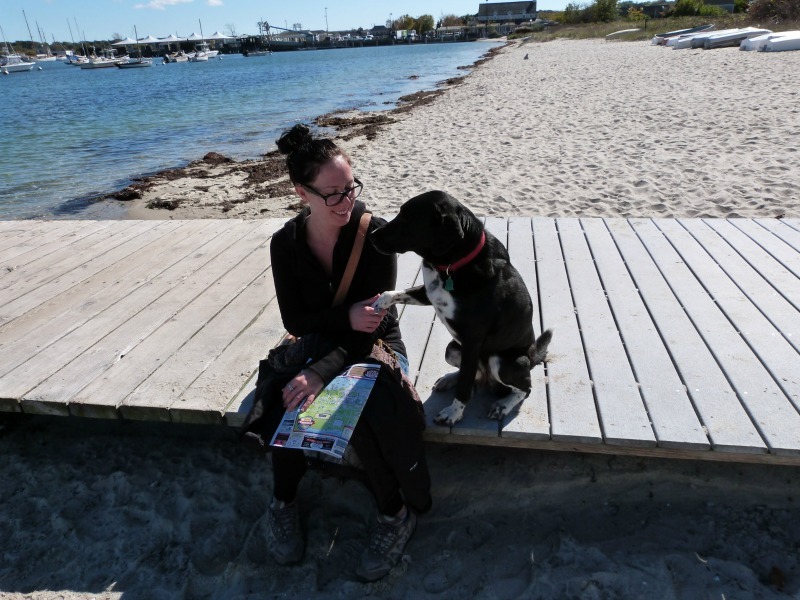 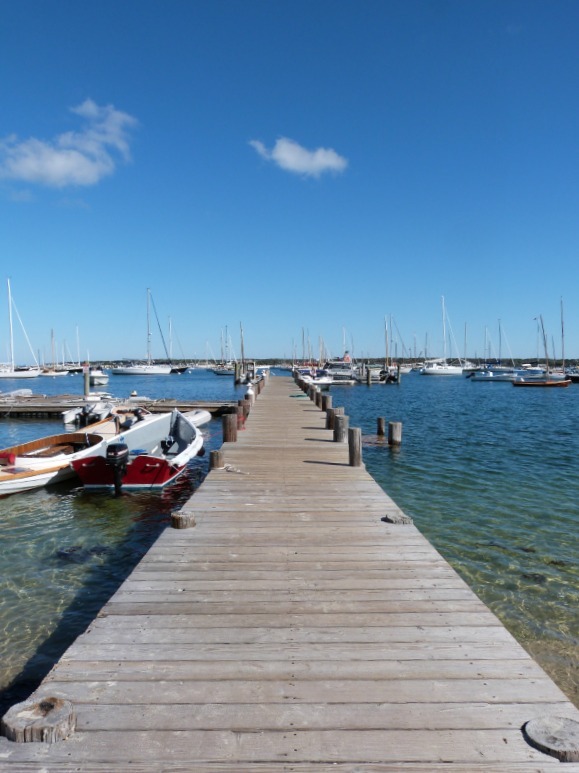 I farewelled my new canine friend and walked further down the beach, past beachside summer cabins. There were some beautiful shells and pieces of driftwood worn smooth from the ocean, scattered along the sands.

I found a crazy looking crab shell with spikes protruding down both sides of its back. It was not like any crab I had seen before. Turns out it was a horseshoe crab and we had only found part of its shell. They are crazy looking things and look more like mini armoured sting rays than crabs. 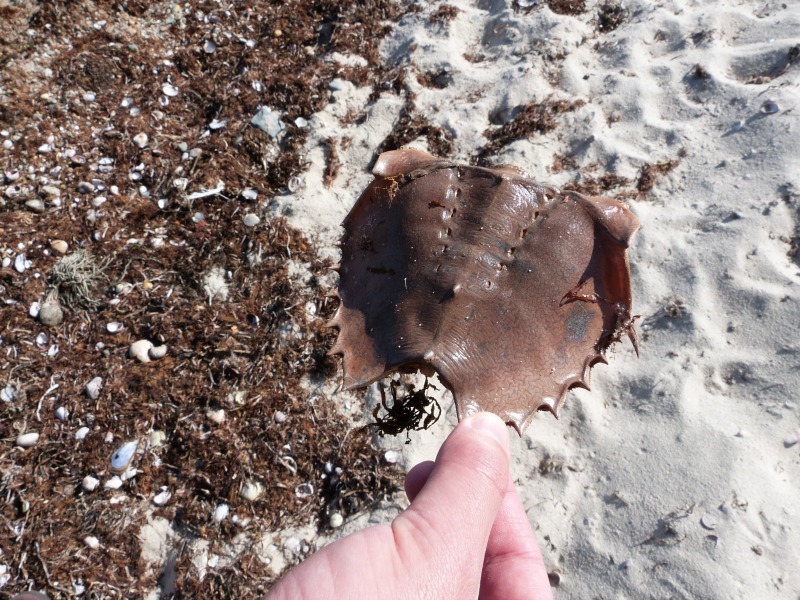 After a while we reached a fenced off private beach so we turned back the way we came. It felt amazing to be in the sun after a very chilly road trip through central New England where the temperatures had been colder than the norm. 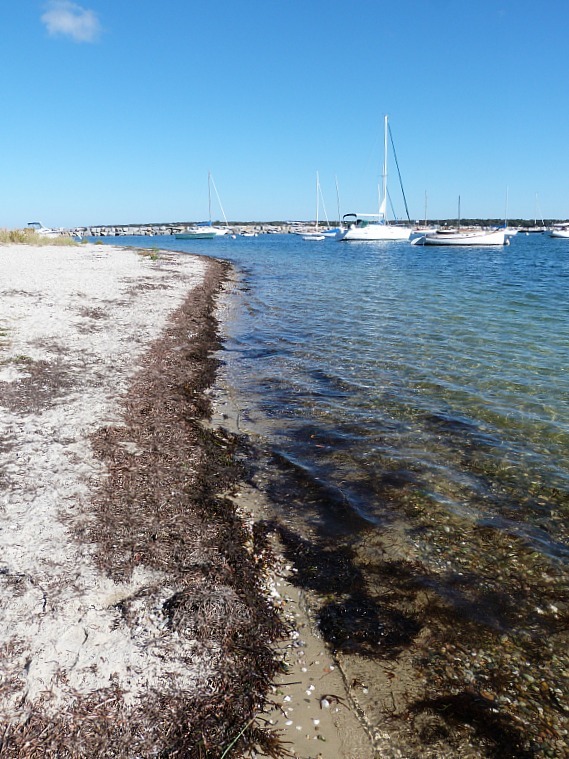 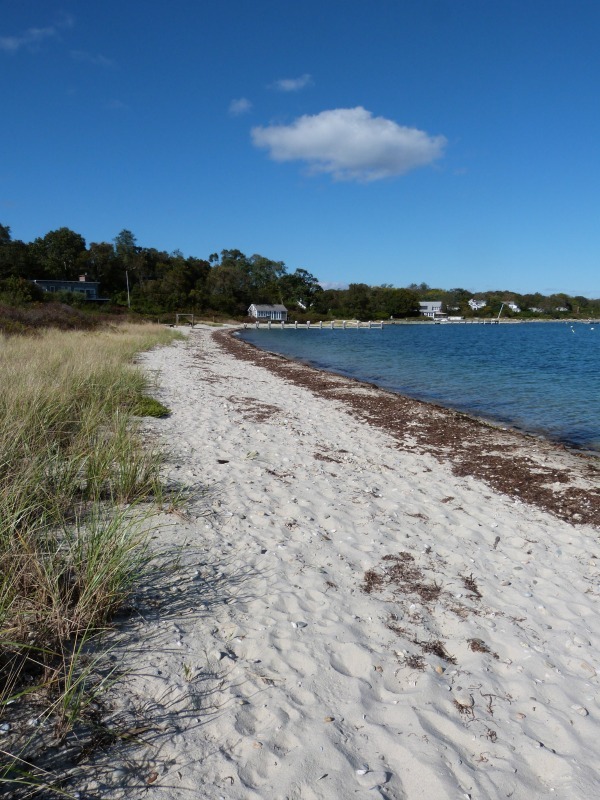 Once we were back in town we still had a couple of hours until the last ferry back so we decided to walk the four miles to the small town of Oak Bluffs, further east.

There was no walking path as such (as it is all over the US), but armed with a vague map of the island we managed to find our way. 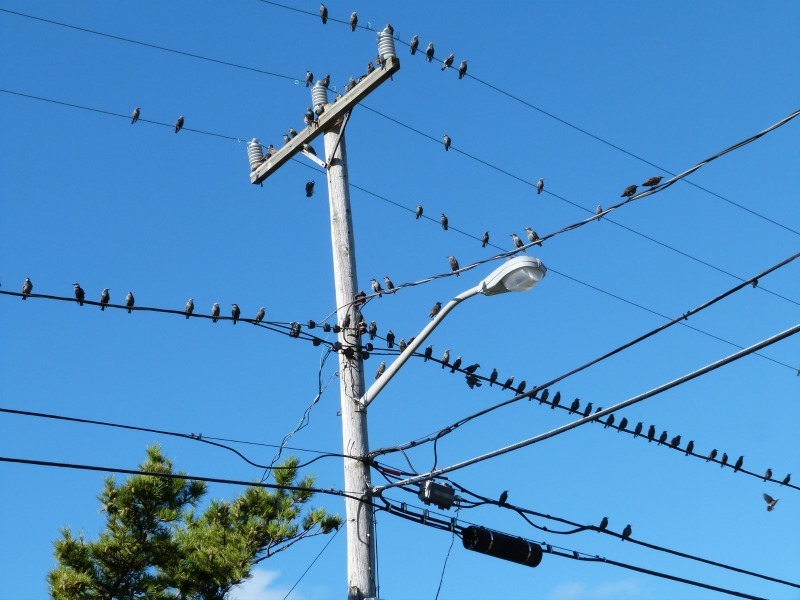 We followed the side walk until it ended then, cautiously, walked along the side of the road. We walked across a really long bridge and past fishermen casting off, into the waters below. Once on the other side of the bridge the sidewalk started again.

We passed cute cottages in a quiet leafy neighbourhood on the outskirts of Oak Bluffs. 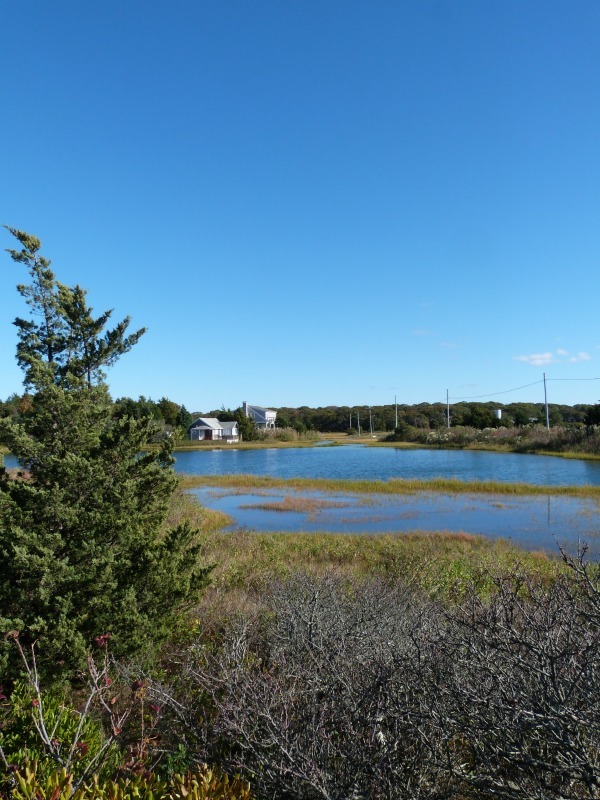 I saw a couple of small shops that were joined to people’s homes but we didn’t see another soul. I imagine that a lot of the houses were empty, their owners back in Boston or one of the other cities along the Eastern Seaboard, in a boardroom or picking their kids up from school, dreaming of when they could come back to their favourite home, the one on the island.

Finally after walking for nearly 90 minutes, we emerged by a green park with a duck pond. 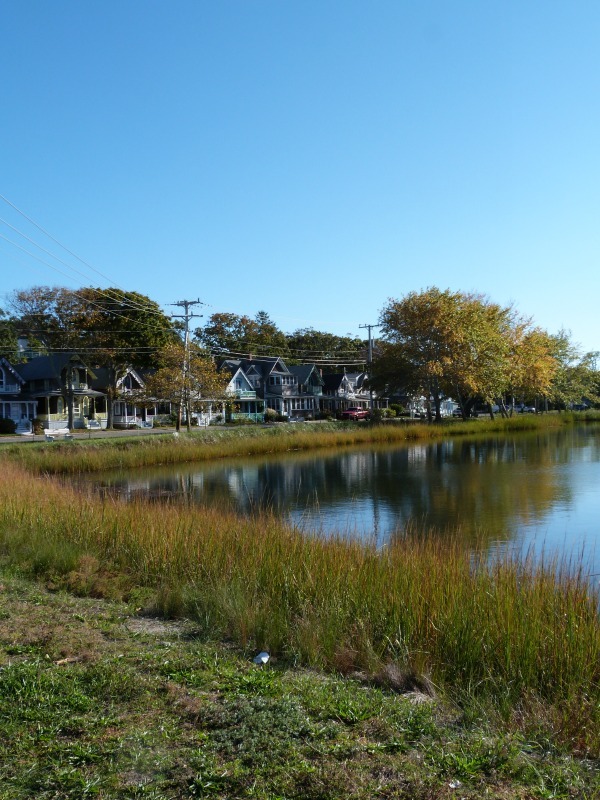 Oak Bluffs is quiet in the off season, even quieter than Vineyard Haven. We walked the boardwalk at the marina, past waterside boutiques and eateries. I could imagine it would be thriving in summer but I kind of liked the quiet. It felt abandoned. 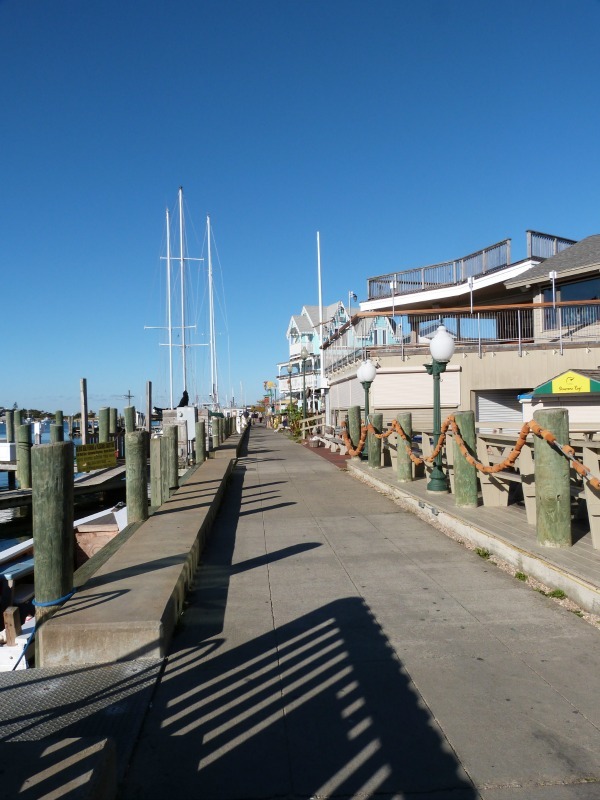 There was another large grassy park on the other side of the marina, Ocean Park, with a regal gazebo complete with a weather vane with an whale on top. Droves of Canadian geese covered the lush grass, frantically searching for food in the soil.

We wandered briefly above the rocky shoreline of the harbour before it was time to catch our bus back to Vineyard Haven. 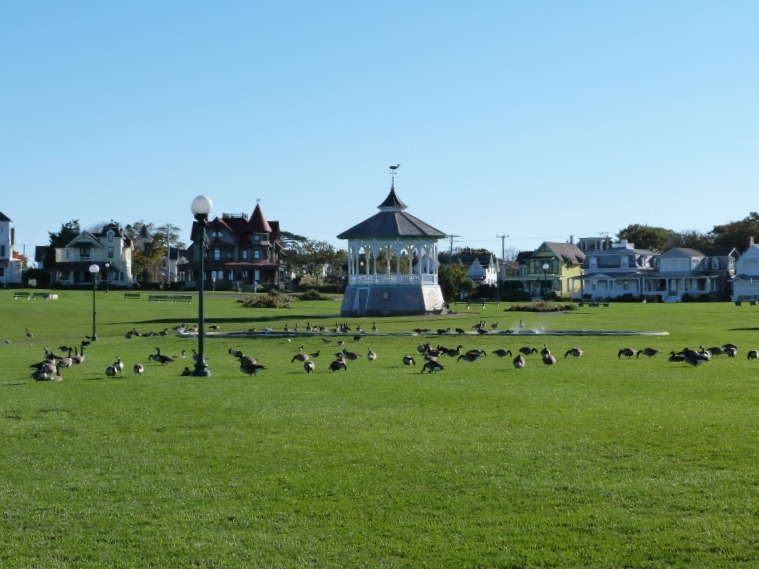 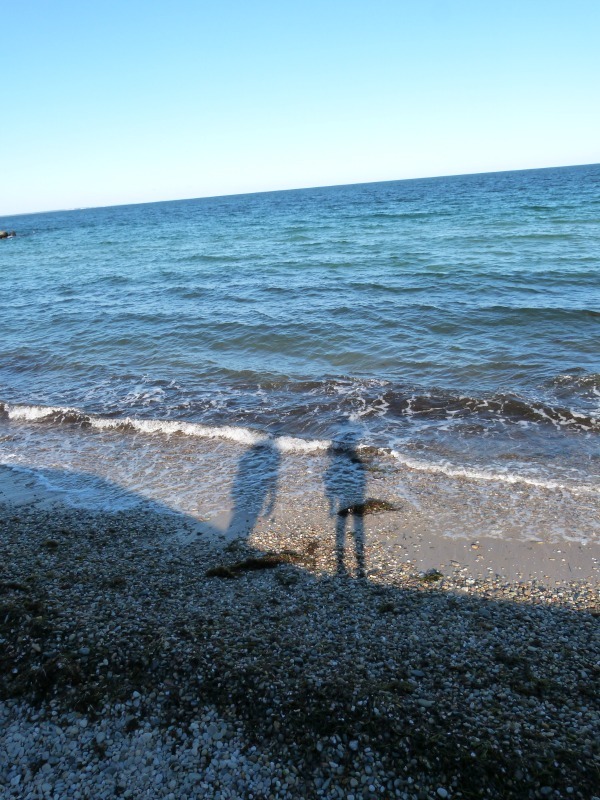 And that’s all we got to see of Oak Bluffs. I would have loved to stay longer as I really liked the feel of this small town that values its green spaces, but it was fast approaching the scheduled departure time for the last ferry off the island and we couldn’t afford the steep price of a night in a Martha’s Vineyard Hotel.

I would like to return for a few days one summer, when we could camp or stay in the summer only hostel. This island definitely deserves more time. 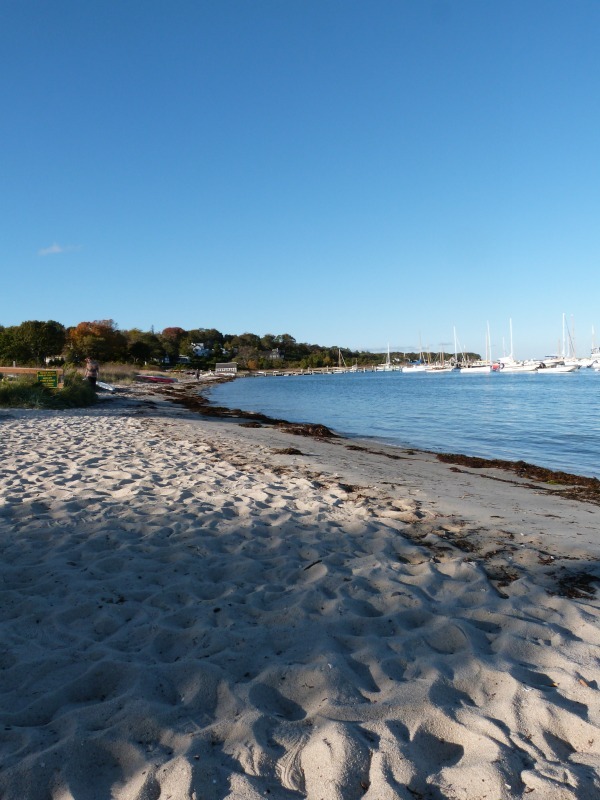 The sun set as we were plying the orange waters of dusk, heading back to Woods Hole. A perfect ending to our short excursion. 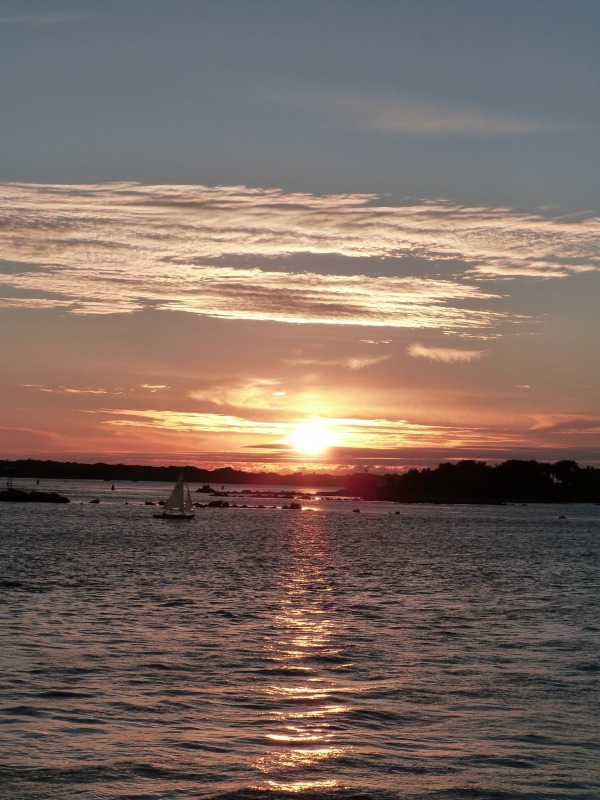 We were only on Martha’s Vineyard for a mere few hours and there is so much more to discover, but I loved what I did get to experience. It is very refined and elegant, not a hair out of place, but you could also feel the strong connection to the sea.

Martha’s Vineyard was very maritime-y indeed. Just as I was hoping.

Where to Stay on Martha’s Vineyard

Stay at Isabelle’s Beach House, an oceanside bed and breakfast in Oak Bluffs. Only 5 minutes walk from the ferry, the rooms at Isabelle’s are bright and beach-themed, and select rooms have ocean views and balconies.

The best Airbnb options on Martha’s Vineyard are this colorful one-bedroom suite in Tisbury with a harbor view, the charming Arrowsmith Cottage in Oak Bluffs, and this contemporary cottage on a private wooded lot in Tisbury.