Hawaii, Islands of the World
This post may contain affiliate links. If you make a purchase through an affiliate link, I will earn a commission at no extra cost to you. Thanks for your support. 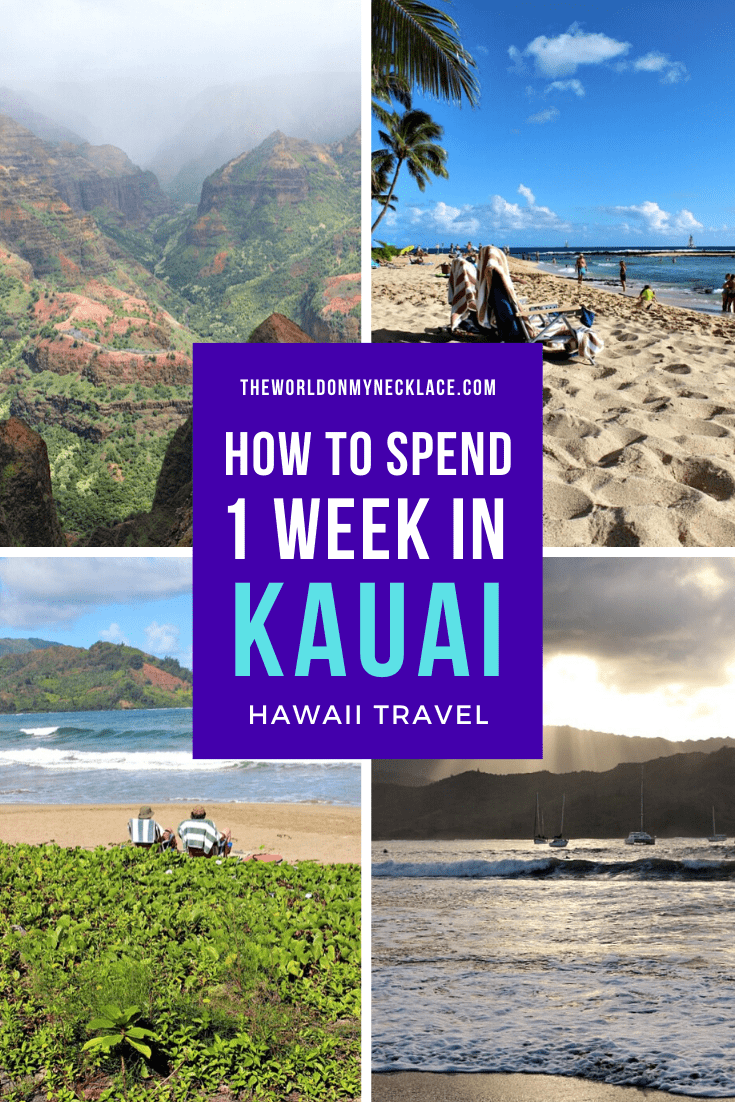 I always suspected that Kauai, known as the Garden Island, might end up being my favorite Hawaiian Island. It was a sneaking suspicion based solely on what others had to say about it.

It was the greenest island. It has the most beautiful beaches. It is more laid back and less touristy than the other large islands.

I believed it all. I should have known better than to form an opinion about a place that I was yet to visit. That is never a good idea.

As it turned out, it wasn’t my favorite island, but I loved my one week in Kauai all the same. 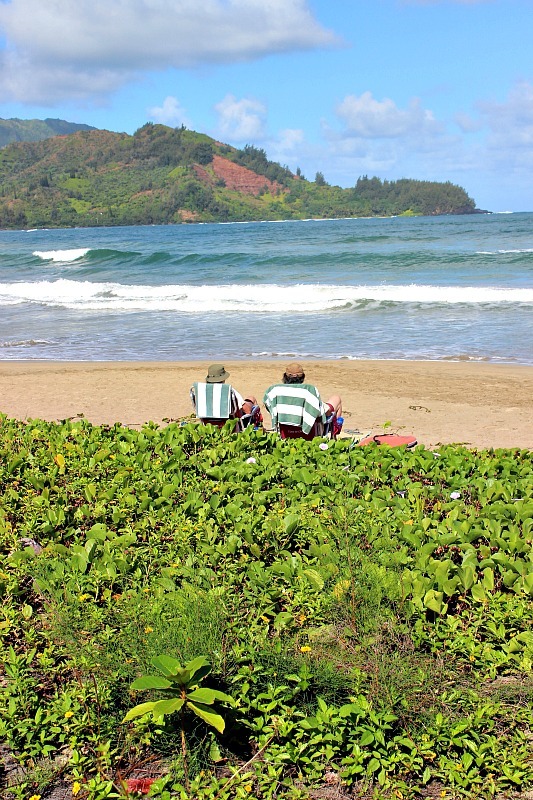 If I had to try and pinpoint exactly why I prefer the islands of Maui and Hawaii (The Big Island) over Kauai, I think it had a lot to do with the overall vibe of the place. It was a weird one that I found hard to read.

Some locals were incredibly friendly and I met some awesome people, both locals and travelers alike during my eight days on the Garden Island. But there were times when I felt unwelcome. I thought maybe it was just me but I spoke to a couple of other travelers and they had the same vibe. It felt a bit.. off.

And although there are certainly some stunning beaches on the island, I didn’t think they were any better than what I have seen on Maui, Hawaii and Oahu. Beautiful sure, but not the most beautiful. 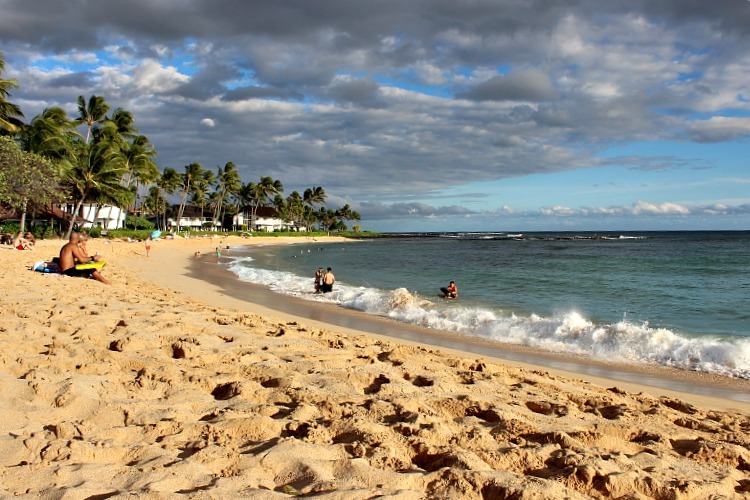 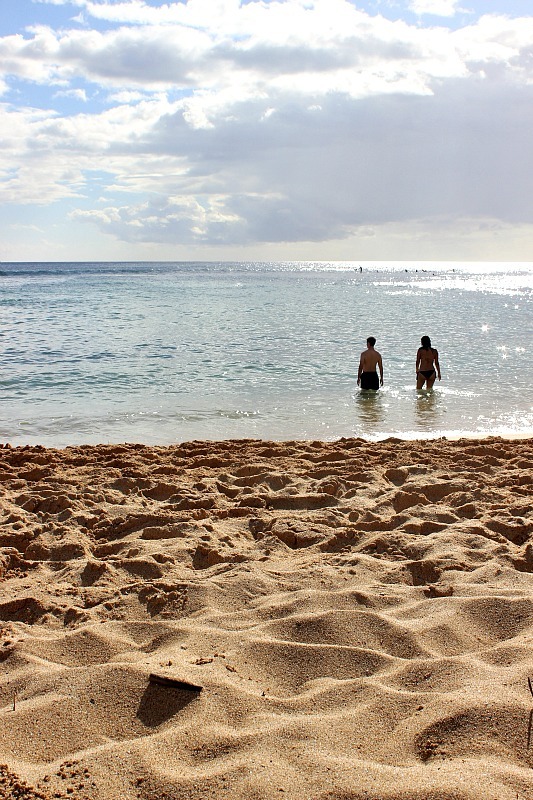 Cloudy skies dominated about half of my stay and I’m sure that didn’t help. Maybe my head space had something to do with it too. I was on my way home after over three months away and I was dealing with some personal stuff.

Who knows exactly why but I just wasn’t feeling the full aloha spirit on Kauai.

Kauai is so Green!

One thing that I realised straight away was why Kauai was known as the Garden Island. I don’t know if I have ever been to a place so abundantly green, and I’m from New Zealand! 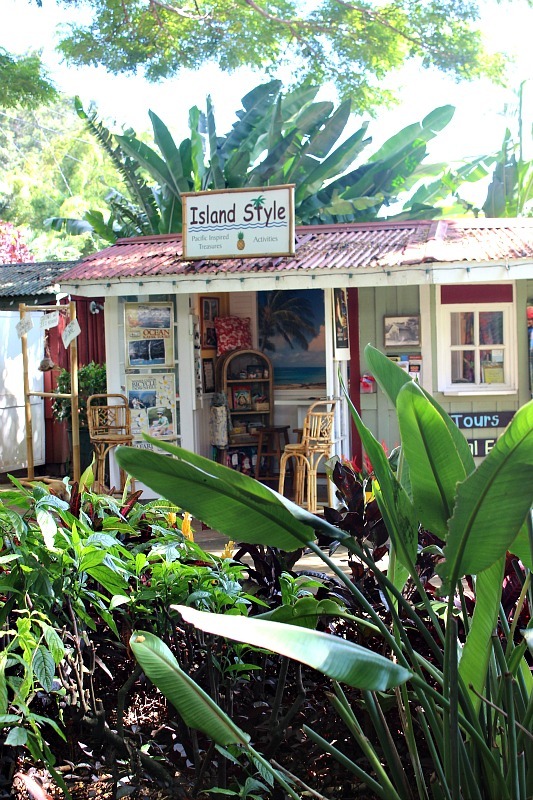 Everywhere I looked there was overgrown jungle, towering trees draped in vines, tall stands of sugarcane lining the roadside. Dense foliage covering every patch of earth that hasn’t been concreted.

The island is incredibly lush, like all of the vegetation is on some kind of plant steroids. 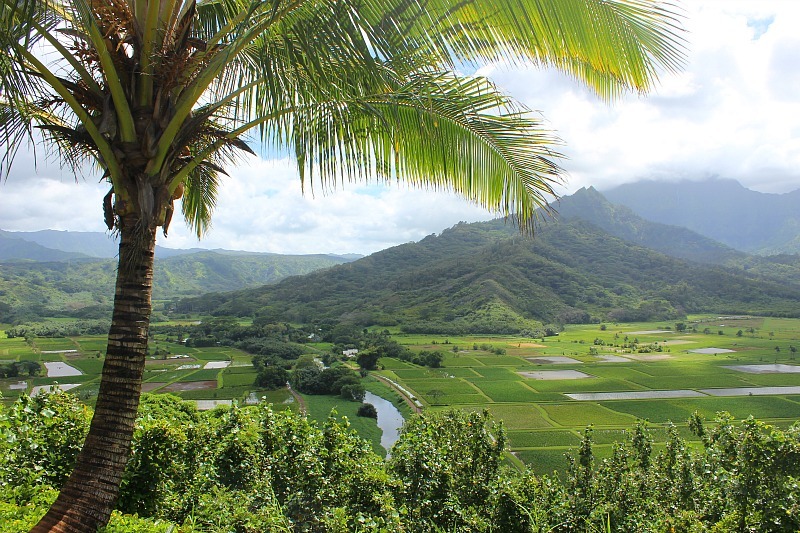 It felt like nature was encroaching on the settlements that had been carved out here, trying to reclaim back the island for itself.

There were also more wild chickens on the island than anywhere I have been before. In carparks, on beaches, in the bush, on roads: seriously, they are everywhere. They must outnumber the locals at least ten to one.

The feral chickens are part of Kauai’s identity and they are in fact protected under law. It is a criminal offence to harm one, and believe me you may want to as the roosters crow at all hours of the day and night!

Want to know how much it costs to travel in Hawaii? Check out this post with a detailed breakdown of average costs. 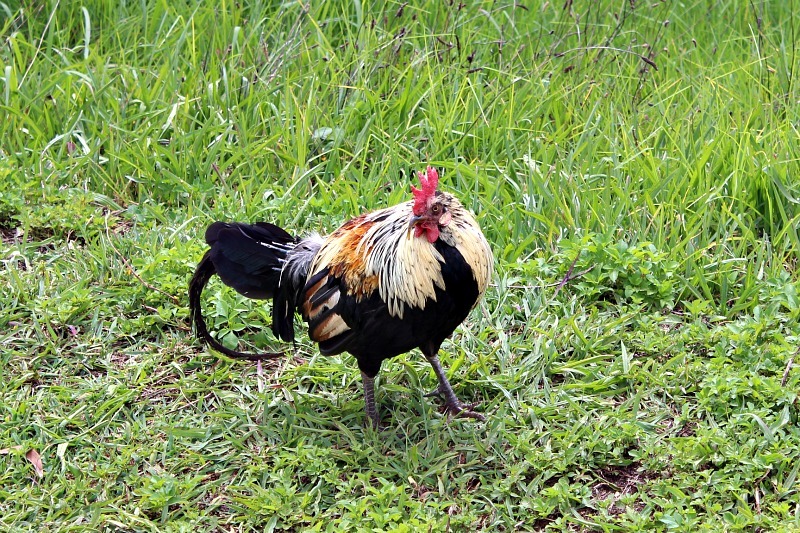 Despite being a mere speck on the map, Kapa’a is in fact the biggest town on the Garden Island. It is also the only place on Kauai with hostel accommodation so I ended up basing myself there the majority of my time on the island.

If I had been traveling with someone else I would have definitely considered camping on Kauai, as it is easy to do there, but I didn’t feel comfortable doing it by myself.

As soon as I checked into the hostel I met a great group of girls. One of them, Amelie, had rented a car and we ended up all hanging out and driving around the island for a few days together.

Slowly our group got smaller as girls left to go home and it ended up being just me and Amelie. 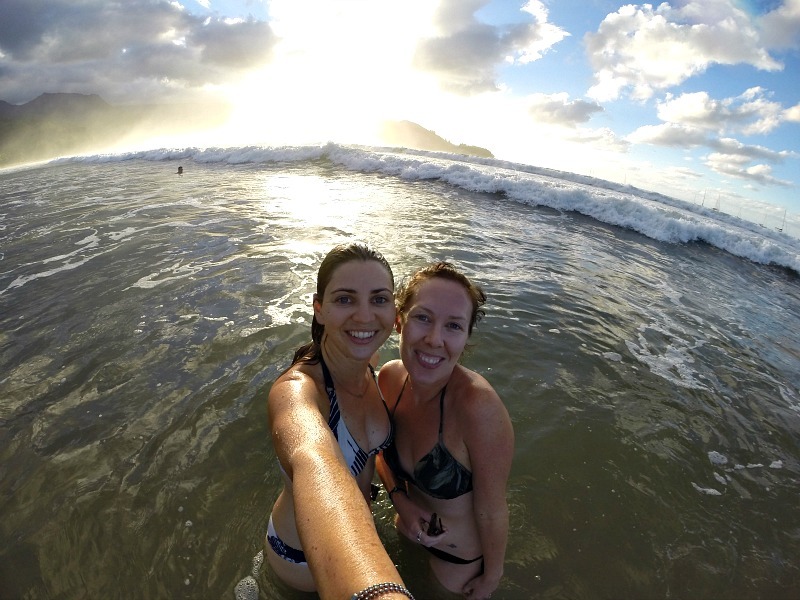 I ended up quite liking Kapa’a. It had some great eateries, a few low key souvenir and clothing stores, and a number of excellent food trucks but the best thing about it is that it feels like a real town, not a town built for tourists. It had a slight grittiness about it. It felt lived in. I liked that a lot.

I was lucky enough to be in town for one of their biggest festivals, the Coconut Festival, a one day event celebrating the mighty coconut. I ate coconut cream pie (delicious), listened to local school kids singing Hawaiian songs, watched polynesian cultural performances and browsed the markets. It was a fun afternoon.

Kapa’a Beach Park is a nice spot for a swim. You might even get to see a rare monk seal checking you out from the waves like I did. But my favourite beach near Kapa’a is Kealia beach. 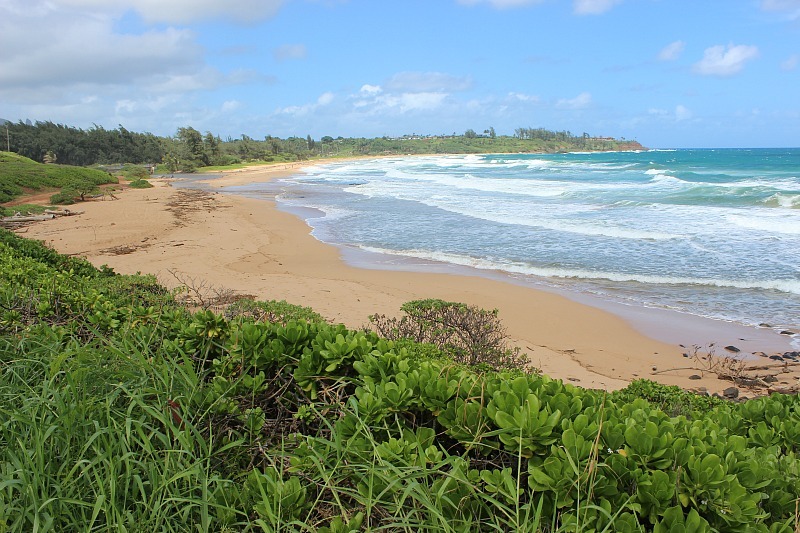 My first day on the Garden Island I walked the coastal trail 1.8 miles to the golden sands of Kealia for a swim and some sun baking before continuing on another mile to Pineapple Dump, a structure that was used by the Hawaiian Pineapple Canning Company to dump the scraps leftover from the canning process into the ocean.

It’s a great little walk (or bike ride), especially if you don’t have a car to get around the island. 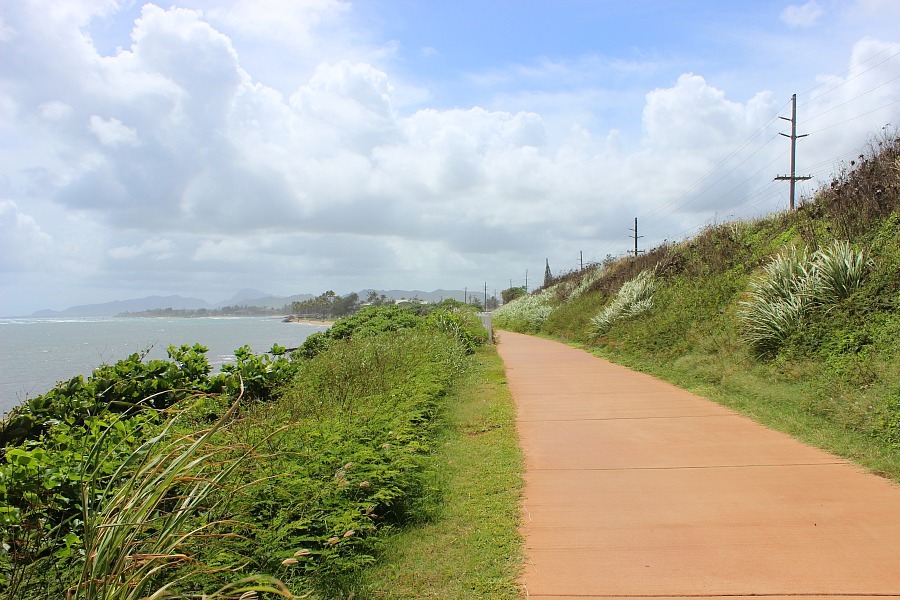 Kapa’a is a nice town but my favourite small town was unassuming little Hanapepe, a historic town located in Kauai’s south. The town is home to a number of buildings that look like they have been transplanted from the Wild West and it is for this reason that a number of TV shows and movies have used it as a backdrop. 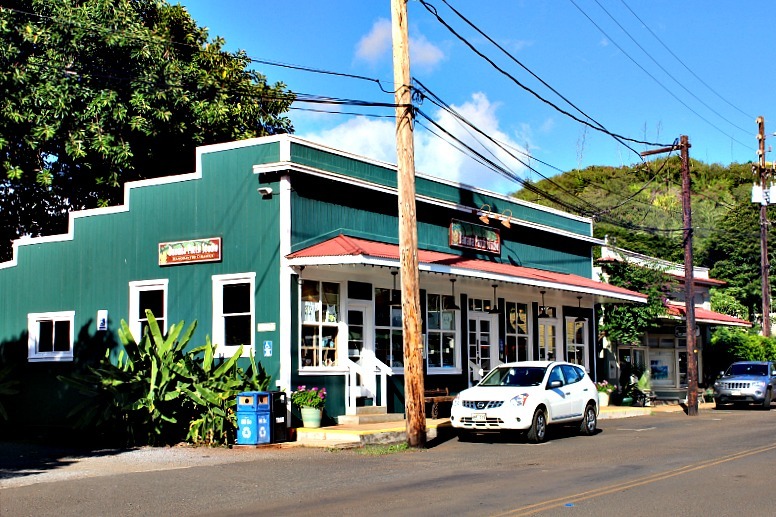 Tiny Old Koloa Town was also a favourite with its restored plantation buildings and overgrown banyan trees. The avocado poke at Koloa Fish Market was one of the best things I ate during my time on Kauai. And I ate a lot of delicious things. A LOT.

The food in Hawaii never fails to disappoint and Kauai was no exception. With numerous food trucks serving up filling plate lunches and fish tacos, I also ate the best hawaiian burgers I have ever tasted from Bubba Burgers in Kapa’a, towering stacks of honey toast with cream and macadamia ice-cream from Uncle’s Shave Ice in Poipu and the succulent Korean Chicken Plate from Kilauea Fish Market which was incredible. 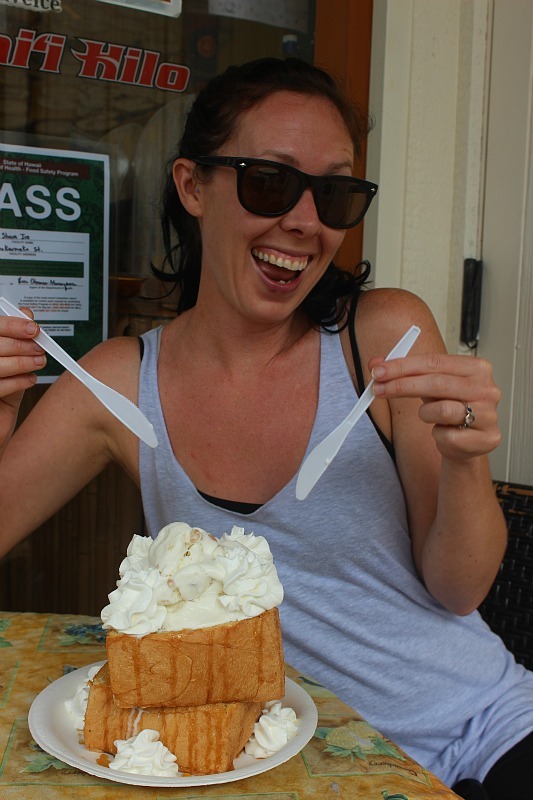 And that’s not to mention the abundance of tropical fruit growing on the Garden Island, a lot of it wild. I ate so many guavas that we just picked off trees that were growing everywhere, my favourites were the small red ones.

Then there were the wild passionfruit that Amelie and I found while hiking above Waimea Canyon, the longans we gorged on at our Guesthouse in Kilauea, the star fruit, the custard apples, the pineapple. All so good!

Along with staying in Kapa’a, I also splurged on a three night stay at a Sanctuary Spa and Guesthouse in Kilauea, where Amelie ended up joining me. The owner gave off a bit of a weird vibe, but other than that I loved our time there. 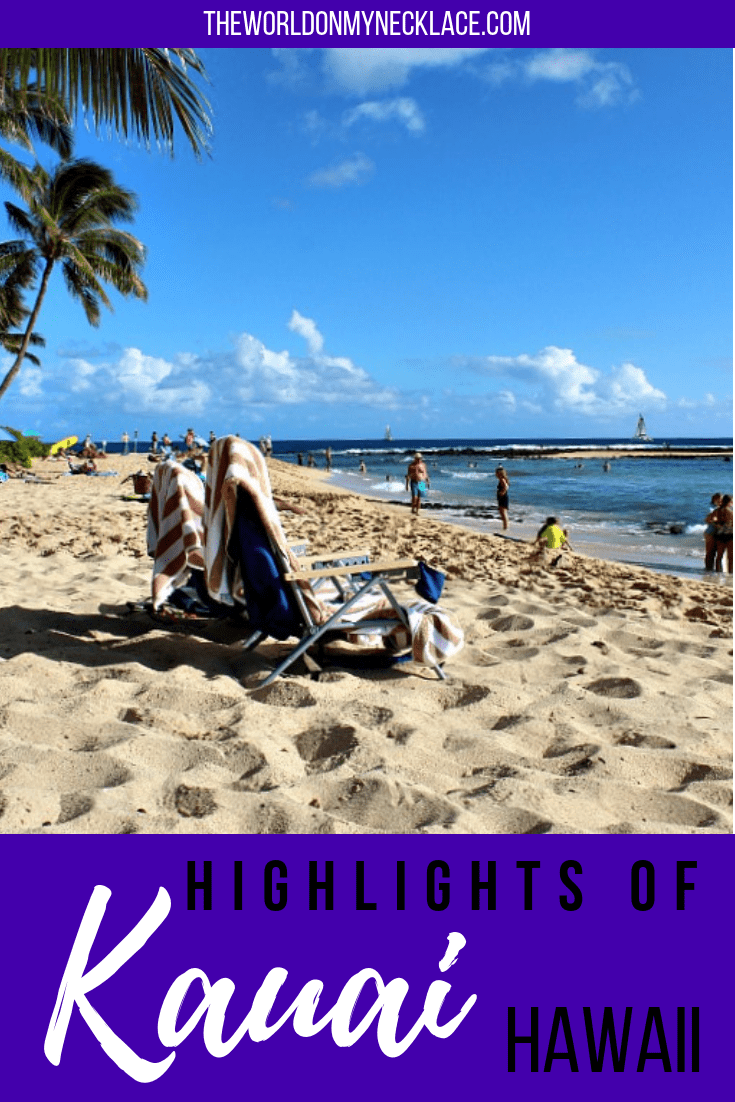 It was a beautiful house with a large deck overlooking the fruit orchard below. We sat on the day bed in the evenings with a craft beer and gazed out at the millions of stars in the clear night sky.

A gorgeous kitty, unfortunately named Isis, joined us for cuddles and we met a couple of cool guys on a soul journey, one of which was making a documentary. It was a peaceful spot to chill out. 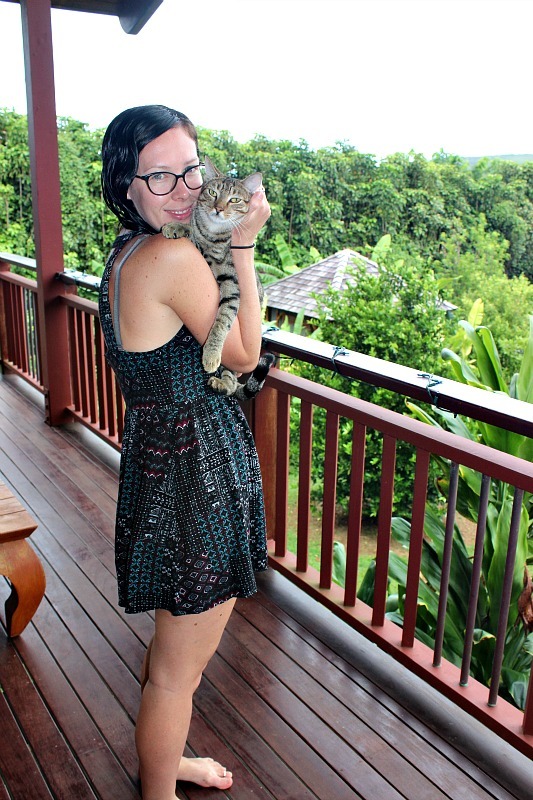 Kilauea itself was a nice little town and we headed in there a few times to grab goodies and coffee from the fantastic Kilauea Bakery. The Healthy Hut was also a great spot to get local craft beer and healthy snacks.

The Beautiful Beaches of Kauai

The North Shore has a more relaxed vibe than the resort dominated south coast and the busier feel of the central coast. Hanalei encapsulated that vibe. It is a truly magical spot that I first became aware of when watching one of my favourite movies ‘The Descendants’.

The town itself is full of surf shops and restaurants which are worth a look, as well as a simply gorgeous little church, but the real magic of the place lies at the beach. 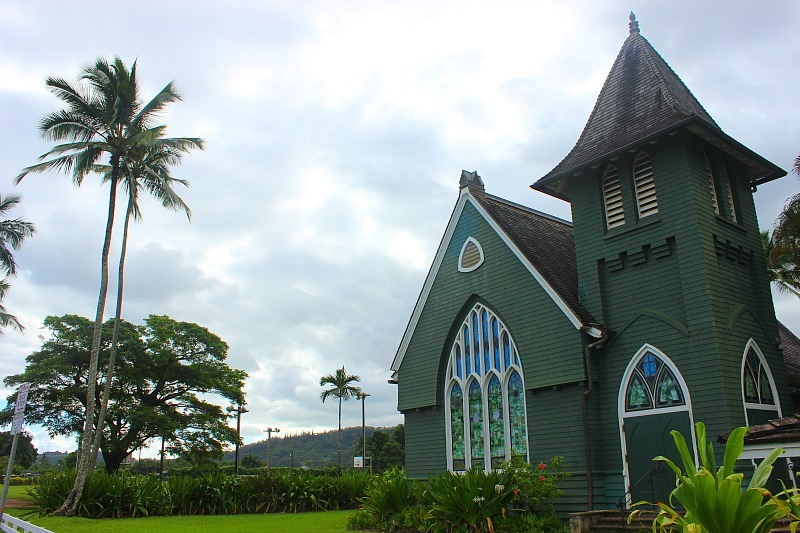 I spent an incredible afternoon/evening there when the gaps in the clouds allowed light to spill in beams down to the wavy ocean below. Amelie and I frolicked in the surf as the sun set in a bright bath of orange light. Pure magic. 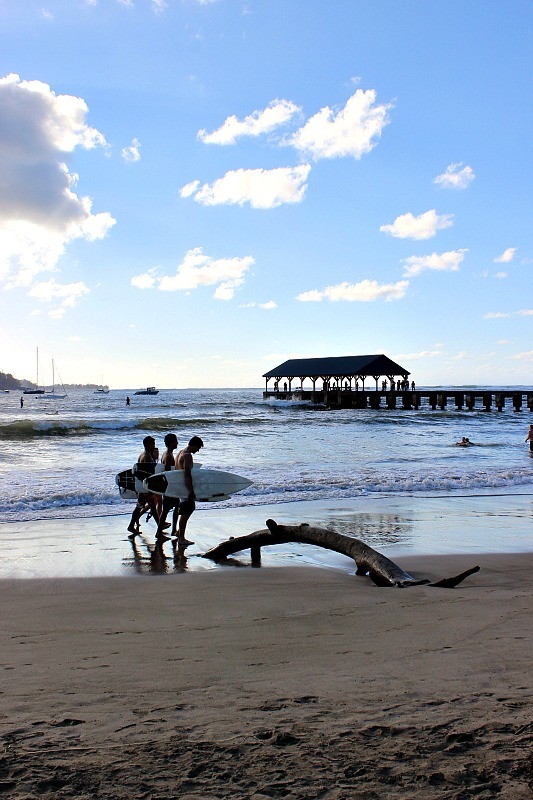 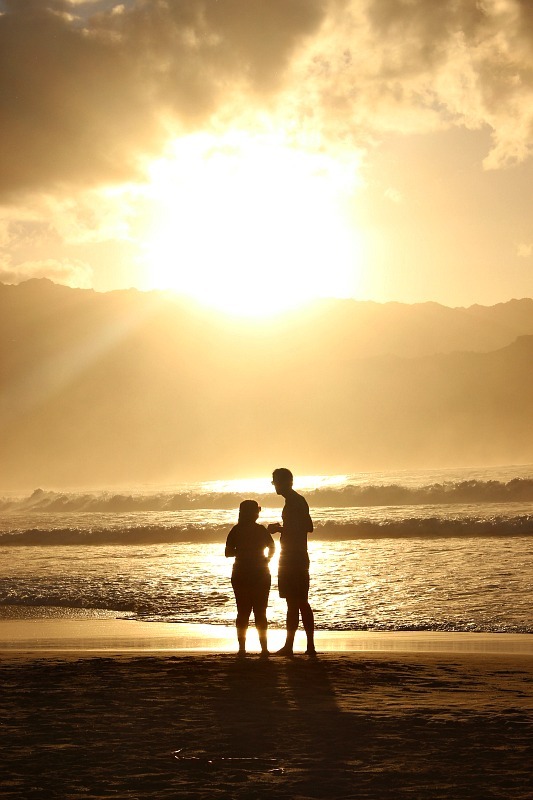 There are a number of beautiful beaches in the north shore of the Garden Island including the vast expanse of white sand at Lumihai beach and the beautiful cove of peaceful water at one of my favourite beaches on the island, Ke’e. 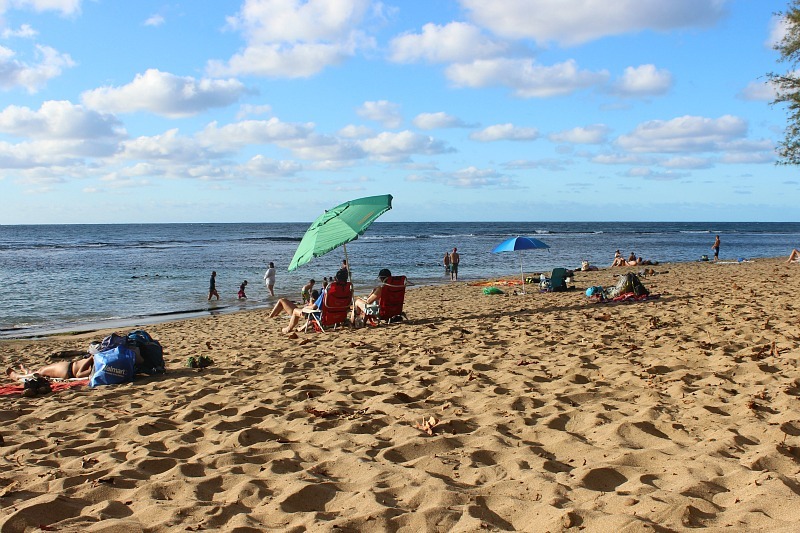 Poipu beach in the south was also a favourite and was one of the best swimming beaches I came across with clear water, gentle waves and deep water without having to wade out too far. I saw my second monk seal of the trip lounging on the beach when I was there. 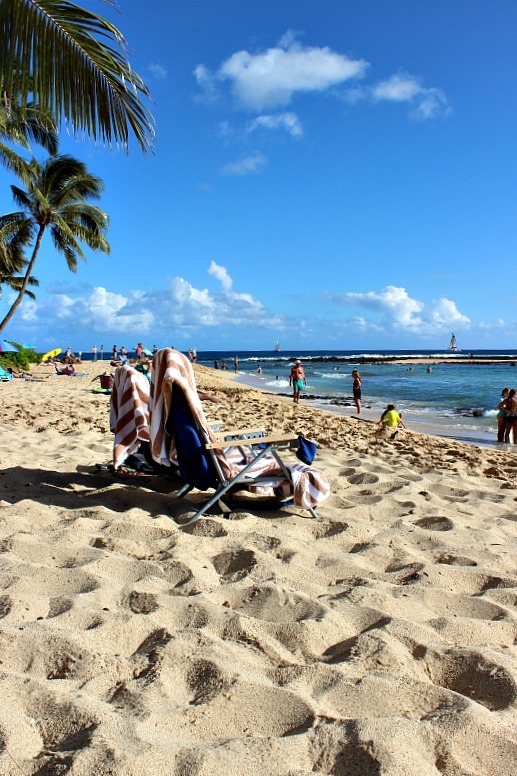 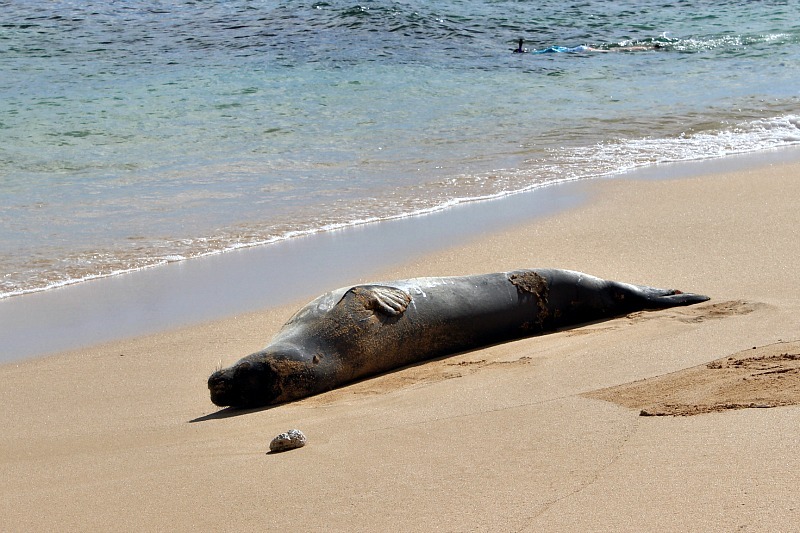 For a change from beaches we also headed to Queen’s Bath in the resort community of Princeville. Queen’s Bath can be a treacherous spot for swimming when the swell is big but it wasn’t bad the day we went.

After a short walk over the rocks from the carpark a beautiful pool of sparkling, still water came into view. I love a natural rock pool and this one was a beauty. 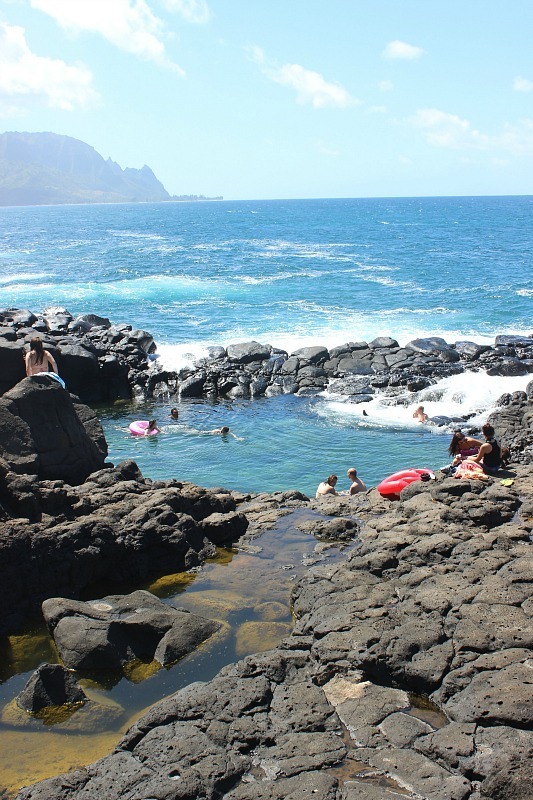 Away from the gorgeous coastline, Waimea Canyon is one of the main reasons a lot of people choose Kauai over other islands and I can definitely see why. Think the Grand Canyon on a smaller scale but a lot greener.

Waterfalls tumbling to the canyon bottom, craggy red rock outcrops, a dense canopy of trees lining the canyon rim. It was moody and beautiful the first day we drove out there under a sky thick with dark clouds. 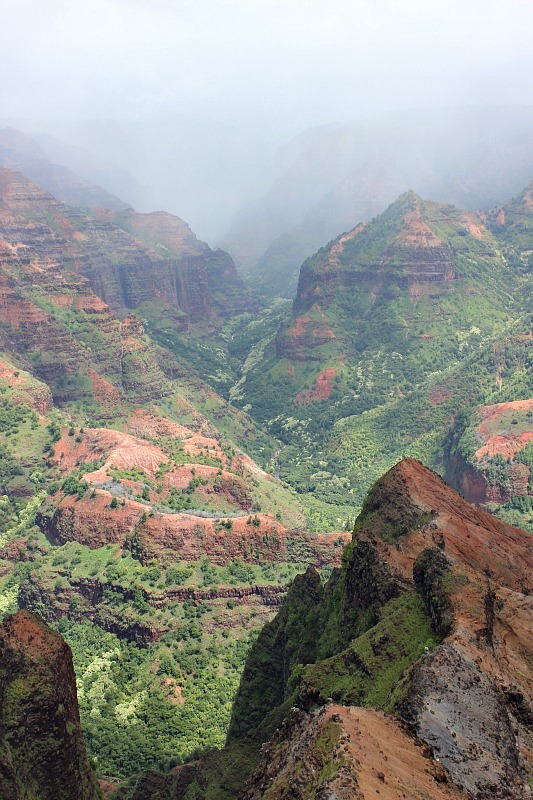 Amelie and I went back there a few days later when the sun was shining to hike and it was even more beautiful. The colours were spellbinding. It was my favourite Kauai hiking adventure.

I did a lot of Kauai hiking and it is absolutely one of the best ways to discover the natural beauty and diversity of the Garden Island.

Through mud and along sheer cliff faces to waterfalls, through dense jungle filled with wild guavas, around a working farm near Kilauea, along a dramatic coastline of wave-battered beaches, as well as along the rim of the majestic Waimea Canyon.

I enjoyed the Kauai hiking so much, I wrote a separate post about it. 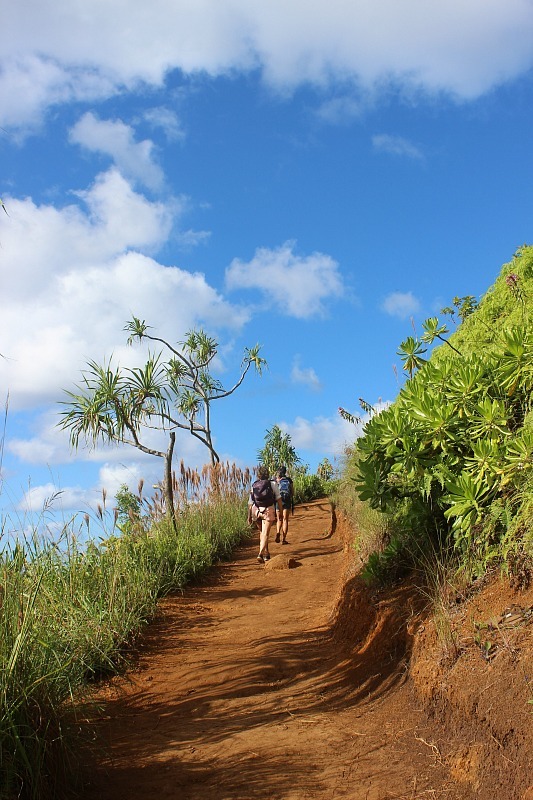 It’s funny, in hindsight my time on the Garden Island was pretty damn amazing. It may not be my favourite island but that doesn’t mean that I didn’t appreciate the experiences that I had there. It has a lot to offer a visitor.

Would I go back? Yes I would. But it just wouldn’t be my first option.

Have you been to the Garden Island? What were your impressions? 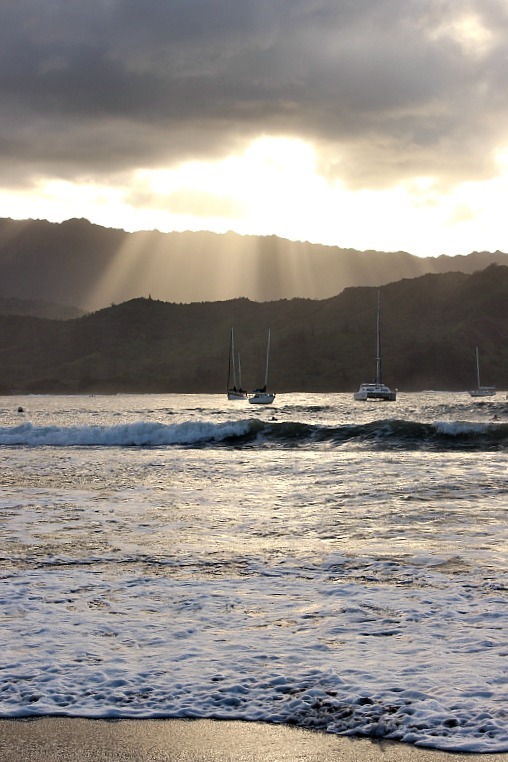 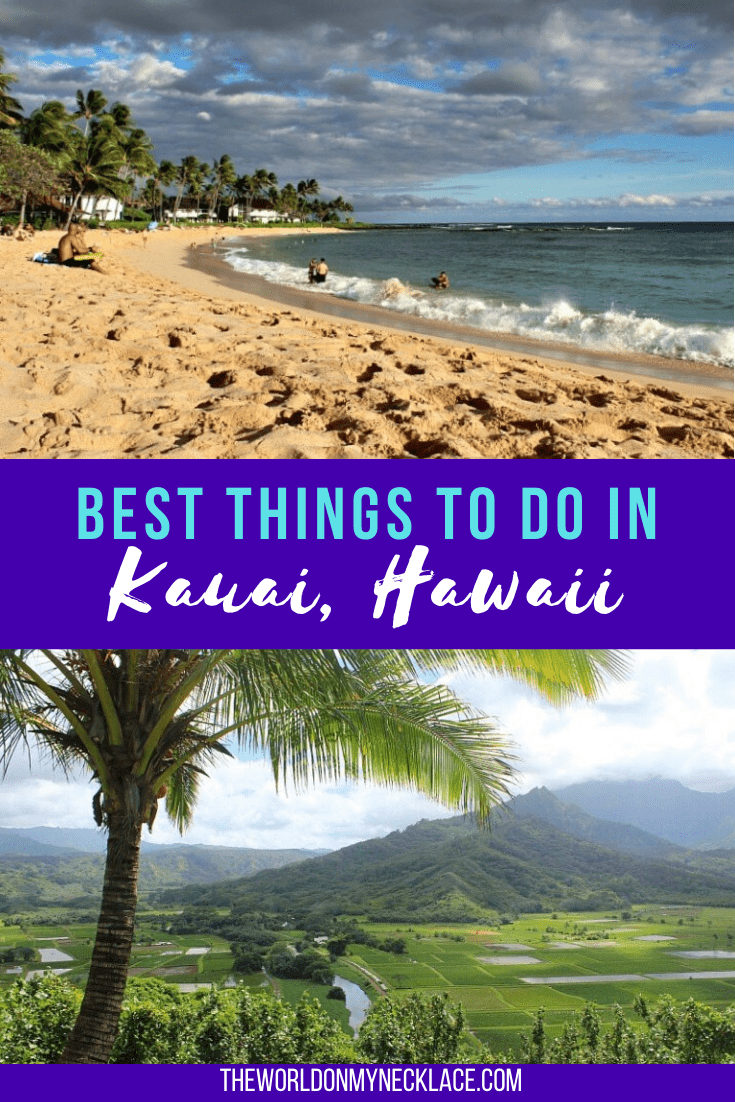 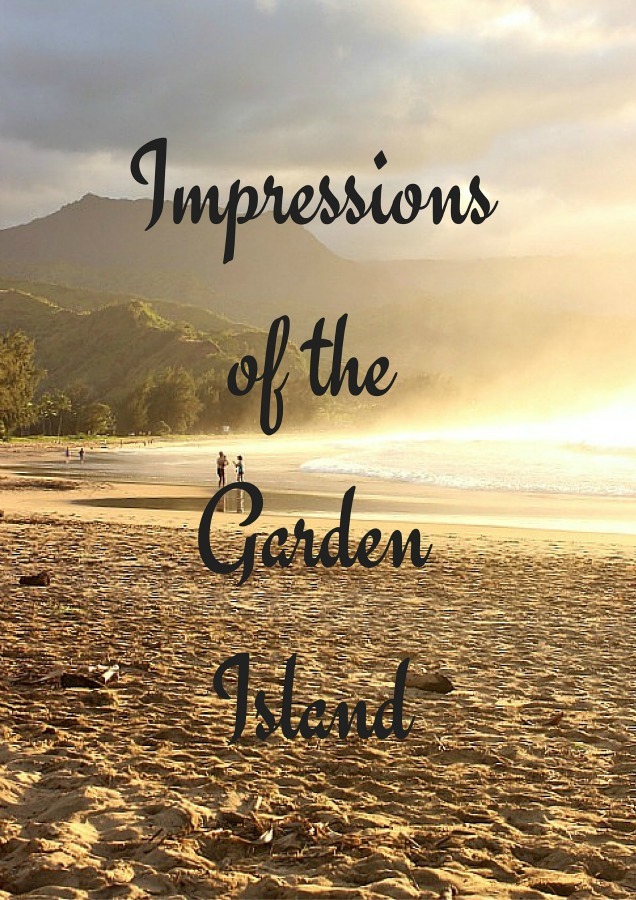