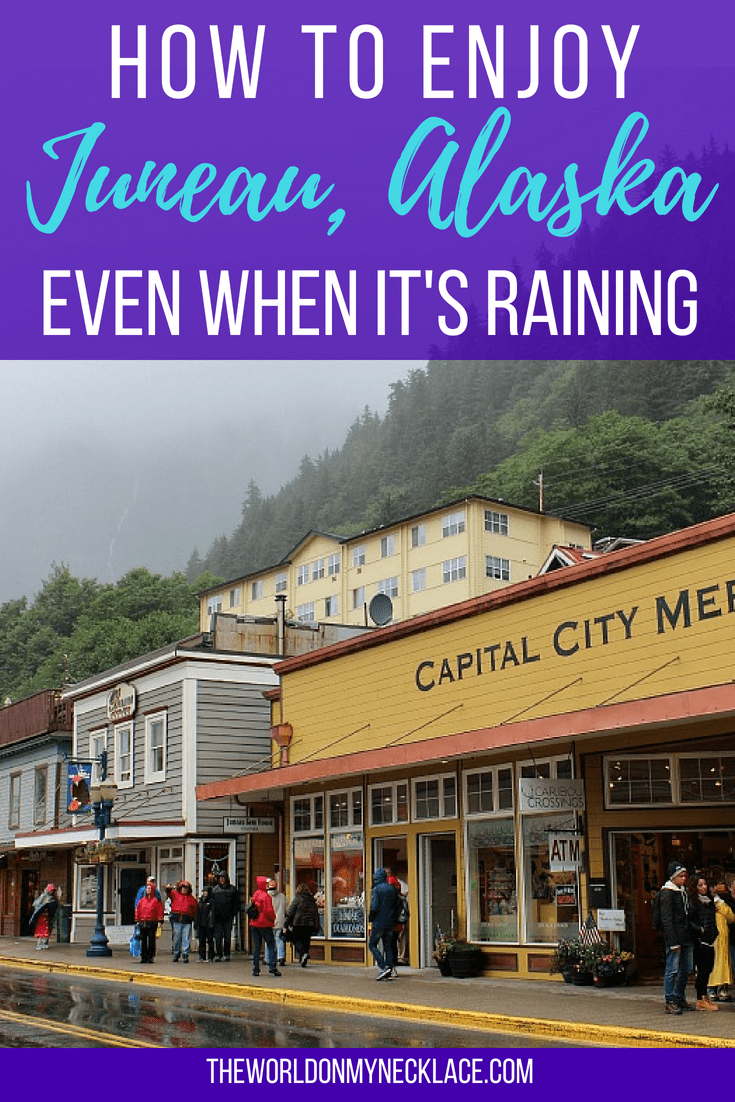 If you are visiting Juneau and it looks like it will be raining during your time there, read on to find out the best things to do in Juneau when it rains…

Experiencing Juneau in the rain is a more likely occurrence than not. It is one of the wettest US cities after all.

After two weeks of mostly sunny skies, my luck with the weather ran out in Juneau. I finally got to experience the cold and rainy weather that has ruined many a trip to Alaska.

It was cold, it was wet, the rain was unrelenting. Did I wish that it had been sunny? Of course. But I still managed to enjoy my time in Juneau in the rain. Well most of the time. 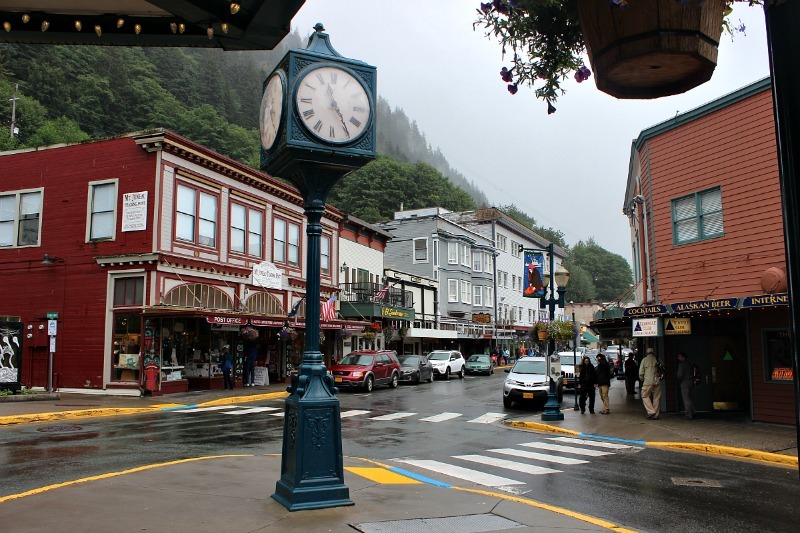 Table of Contents show
Interesting Facts About Juneau, Alaska
Best Things To Do in Juneau When it Rains
Hanging Out at Cafes and Bars
Checking out the Mendenhall Glacier
Touring the Alaskan Brewing Company
Hiking to the Mount Roberts Tramway
Where To Stay in Juneau

Juneau is an interesting city to say the least. It is Alaska’s State Capitol and the only State Capitol in the US that can’t be reached by road. It is also the most geographically isolated.

To get to Juneau you have to either fly in or take a boat – a lot of Alaska cruises come through Juneau and it’s on the ferry route, and that’s the way that a lot of the inhabitants of Juneau want it to stay.

Even the Mayor contested having a road that leads anywhere. Alaskans are quirky like that, and I love them for it.

Juneau is Alaska’s third largest city with a population hovering at just over 30,000 souls. It is also one of the most beautiful cities in Alaska with historic houses climbing the slopes of Mt Roberts and Mt Juneau which tower over the city; a network of staircases connecting the mostly wooden buildings.

Thick temperate rainforest encloses the city and waterfalls fall from mountain peaks. The downtown is quaint with colorfully painted shops and restaurants. 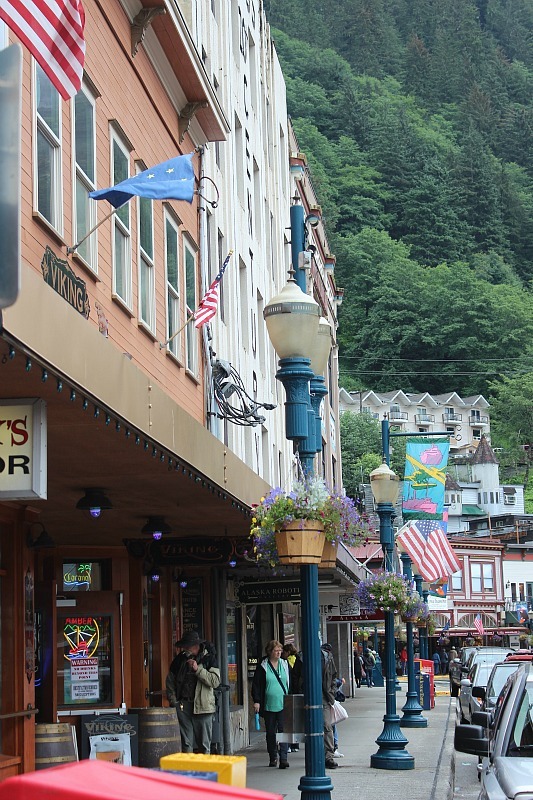 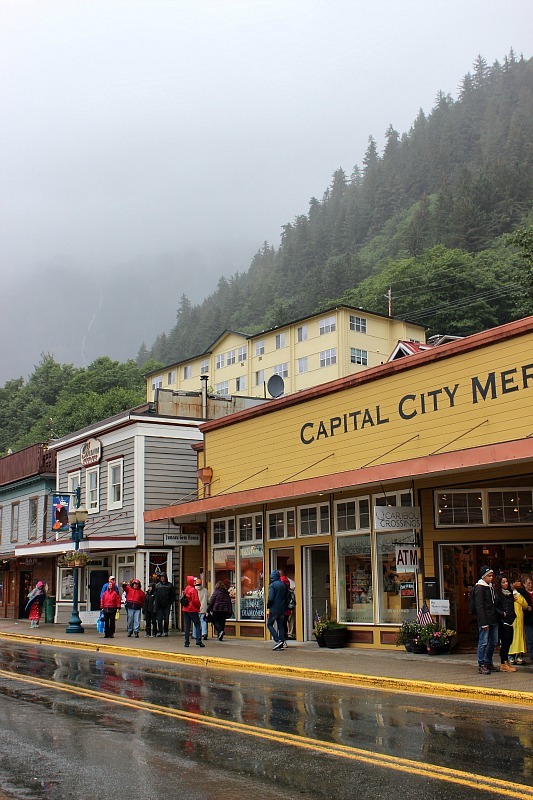 Throngs of cruise ship passengers clog the roads around the harbor but if you venture a few streets back, you can easily escape the crowds.

Best Things To Do in Juneau When it Rains

Hanging Out at Cafes and Bars

During my four days in Juneau, I straddled the line between blatant tourist and local – visiting a couple of popular sights as well as spending a lot of downtime in the various cafes dotted around town.

I loved The Rookery for their coffee and breakfast burrito and the Heritage Coffee Roasting Co was a cozy spot to hang out. A great way to spend a day in Juneau in the rain. 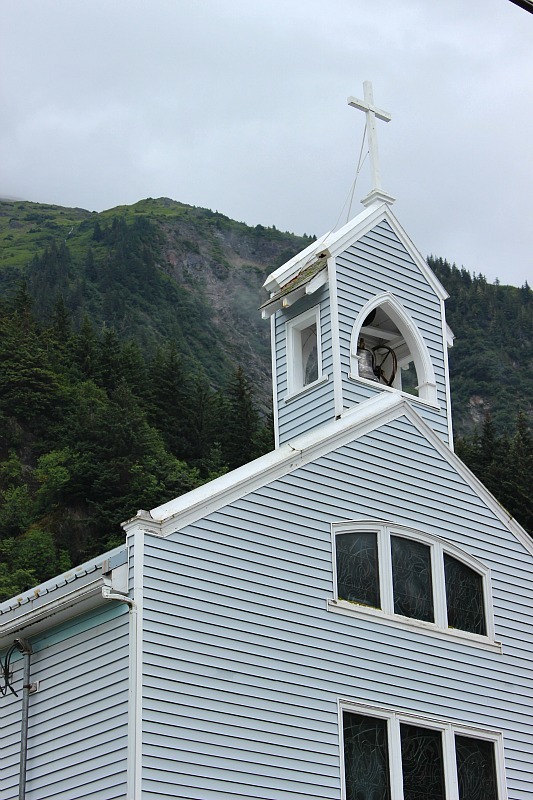 I even spent a couple of afternoons reading in the library while it bucketed down outside. Looking out onto the slopes of Mount Juneau with various waterfalls in sight, I have never been to a library with such amazing views.

The super cheesy Red Dog Saloon with its over-the-top Wild West decor was a fun place to have lunch and the food was surprisingly good. There was a guy playing old-time tunes on the piano and the atmosphere was frenetic.

Rainbow Foods was my favorite spot for a cheap lunch. This organic food supermarket had amazing freshly made pizza slices and a hot and cold salad buffet where you could get a healthy and filling meal for cheap.

It was the exact opposite of the Red Dog Saloon with a very chilled-out vibe but I enjoyed them both for different reasons. 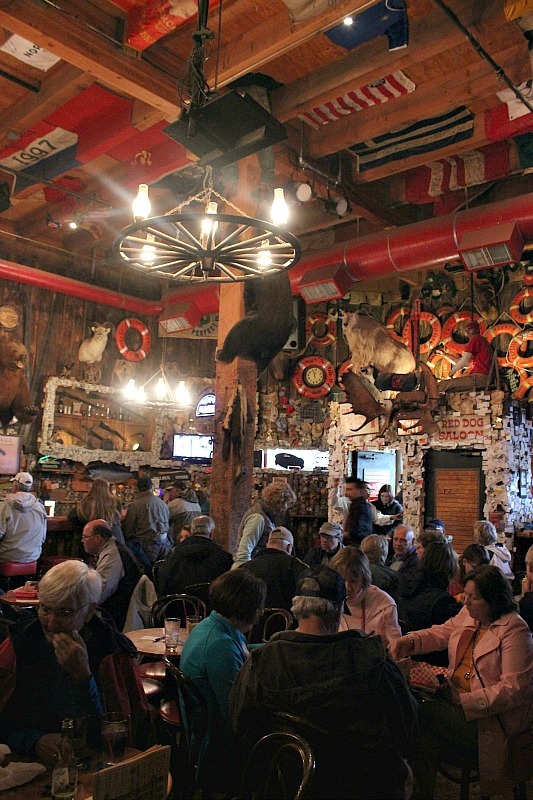 Checking out the Mendenhall Glacier

I had been hoping to do some hiking in Juneau, particularly the hike to the Mendenhall Glacier ice caves, but it was just too cold and wet and I didn’t have anyone to hike there with anyway.

I caught the shuttle to the glacier from the harbor and froze my ass off walking around a creekside track where you could see a few sockeye salmon that were running early, and to a viewpoint over the glacier.

I struggled to feel excited in the freezing cold, surrounded by more people than I had seen anywhere in Alaska thus far. There were multiple tour buses and shuttles pulling up throughout the time I was there and the sheer number of tourists was staggering. 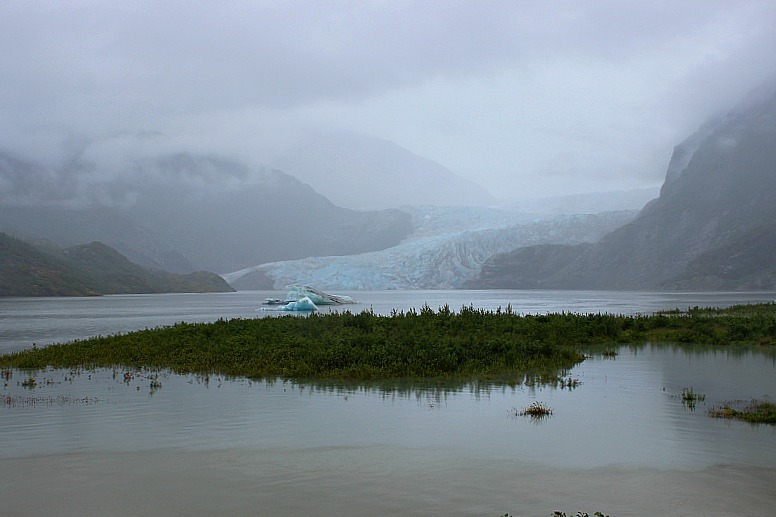 In the Mendenhall Glacier Visitor Centre, it was so crowded that it was hard to make my way through the exhibits. I watched a film about the Tongass National Forest and the glacier through time then I got the hell out of there and caught the next shuttle back to town.

After the incredible glaciers in Kenai Fjords National Park and landing on one in Denali, I was pretty disappointed with the whole Mendenhall Glacier experience. It would have been different if the sun was out I am certain.

One of my favorite things to do in Juneau when it rains is to join an Alaskan Brewing Company tour (not currently being offered but the tasting room is open). I caught the shuttle there and back from downtown and the driver pointed out points of interest along the way.

We passed the State Capitol building and the Alaska Governor’s Mansion which was being renovated as well as numerous bald eagles that were perched in the trees along the Gastineau Channel.

Once at the Alaskan Brewing Company, we tried three different beers in the tasting room and were talked through our experience as well as the history of the brewery.

Alaskan Brewing Company was founded in 1986 and despite humble beginnings it is now one of the most award-winning craft breweries in the country. It doesn’t ship outside of the US but you can find it in 17 states thus far. 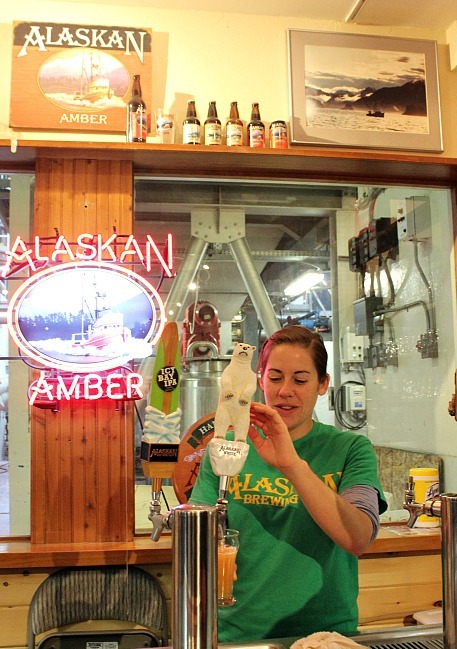 After our time was up in the Alaskan Brewing tasting room we relocated to the on-site bar for more tasters of three beers of our choice. My favorite was the smoked porter which had a very smoky flavor.

Happy and slightly drunk, the shuttle took me back into town. 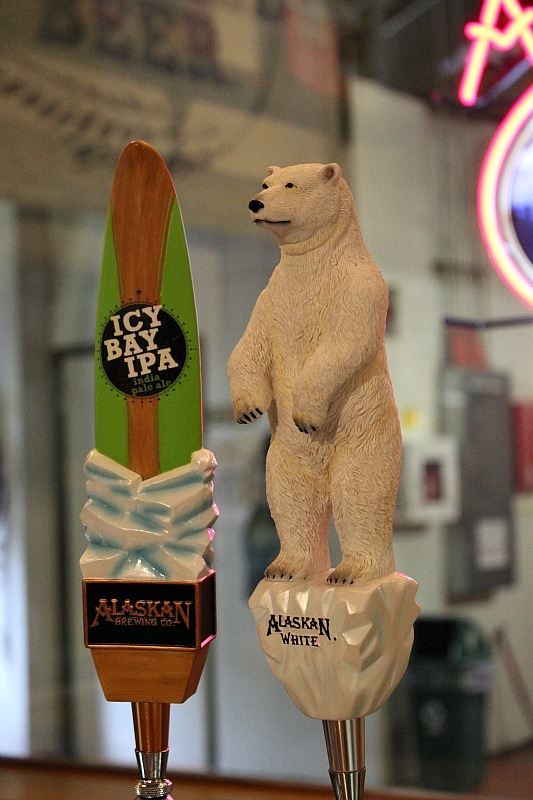 Hiking to the Mount Roberts Tramway

On my third day, the constant rain had finally stopped with only a couple of drizzly showers throughout the day. It was much warmer too so I finally had a chance to do one of the hiking trails around Juneau. My sights were set on the short but steep hike up to the top of the Mount Roberts Tramway. 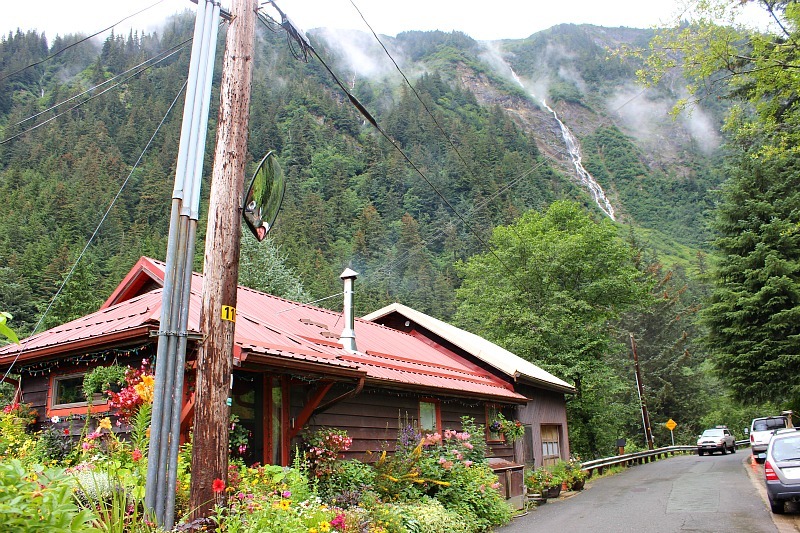 After walking through a beautiful part of town that led into the valley between mountains I began the hike that would take me through the temperate rainforest to the tramway, 1800 feet up Mount Roberts.

Low clouds hung above the trees. Droplets of rain from previous days clung to the lush foliage, sparkling in the rays of sun that were peeking through the thick cloud cover. The trail was muddy with damp roots protruding through the mossy undergrowth, closing in on both sides of the path. 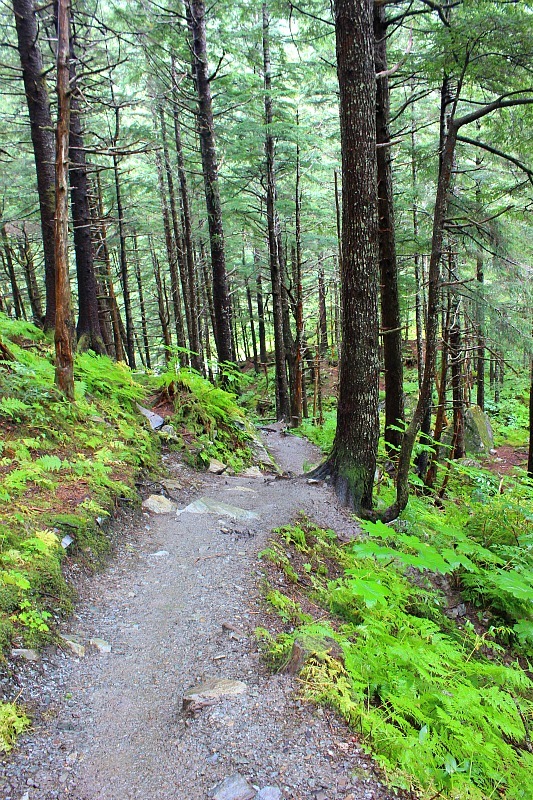 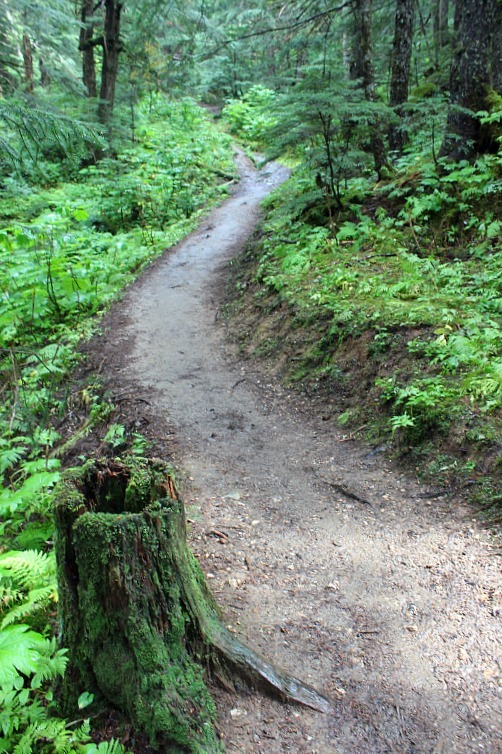 I only passed a couple of people on my way up, the quiet solely interrupted by babbling waterfalls trickling down the mountainside.

I reached the tramway, grateful for the chance to rest after over an hour of hiking steep switchbacks.

I browsed the souvenir shops, visited the one-eyed bald eagle in captivity (her name is Lady Baltimore) and watched the excellent film about Tlingit culture before pushing on further up the mountain.

From the tramway, the trail quickly opened out into an alpine landscape devoid of trees. Fireweed and wild blueberries lined the trail and fat marmots waddled between the jagged rocks, standing to attention with quizzical looks on their faces when I blew my whistle at them. Poor confused creatures. 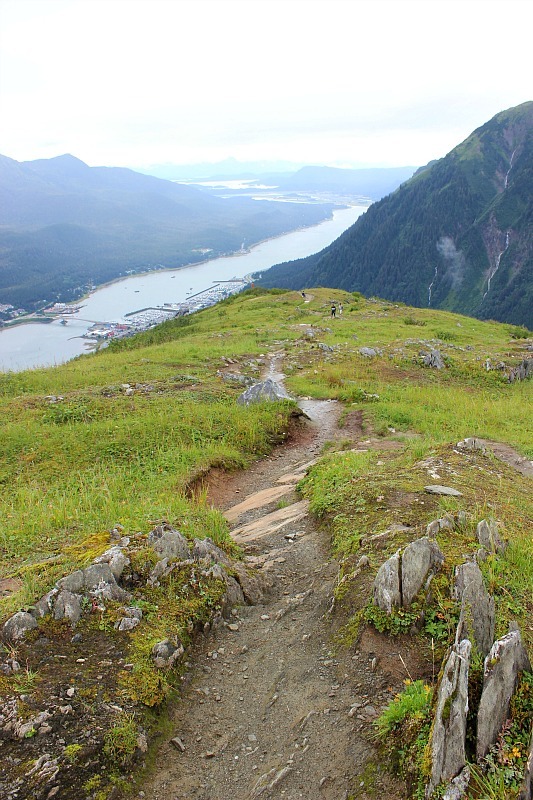 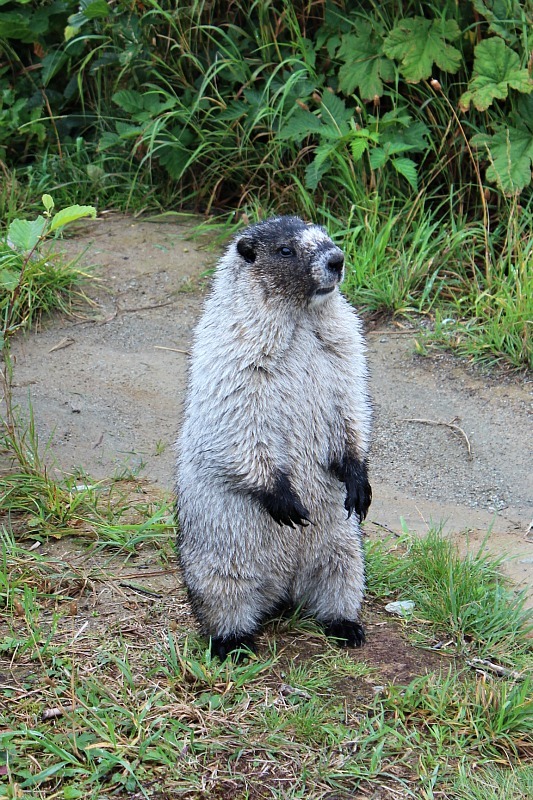 It was getting late so I only walked about another kilometer, past a cross with a view over the Gastineau Channel, the city, and the heavily wooded mountain on the other side of the water. 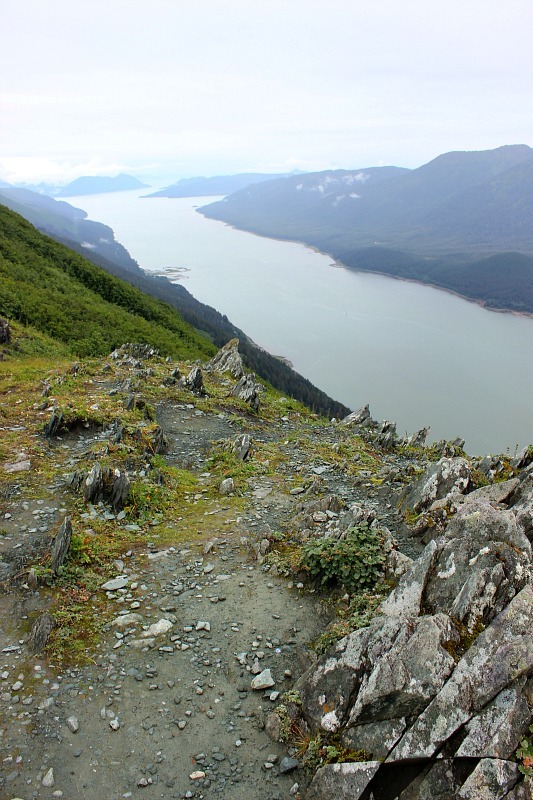 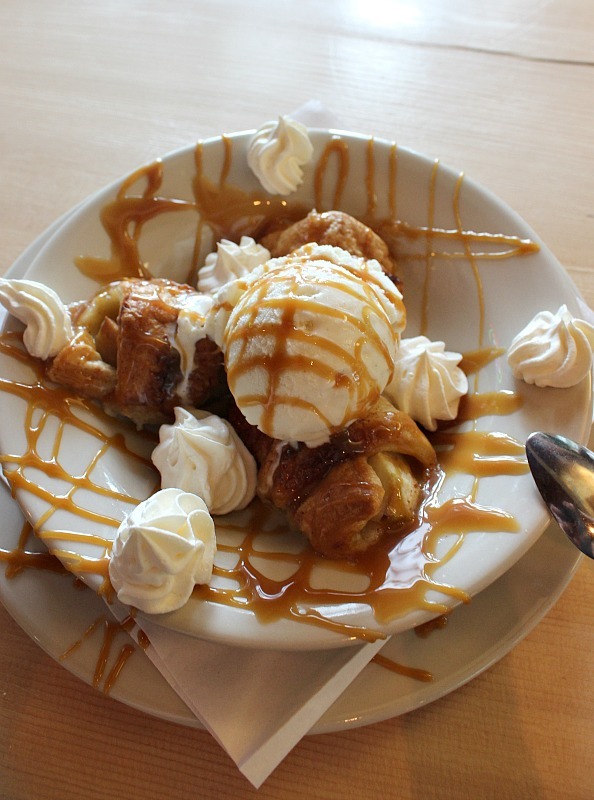 My last day was my favorite in Juneau and redeemed the rainy city for me. After disappointing weather, I was happy that I got to at least experience some of the stunning outdoors that Juneau is known for. That I only got to do one hike simply means that I have to return again. I’m good with that.

When I think back to Juneau now I remember the deep green and the misty darkness of the rainy days that I spent there. Juneau in the rain wasn’t so bad after all.

A fitting memory for a city that rains for two-thirds of the year.

Have you been to Juneau? If you have did you experience Juneau in the rain or did you luck out with some sun?

Where To Stay in Juneau

I stayed at the only hostel in town, the Juneau International Youth Hostel, which was super old school in the fact that the prices are reasonably low ($30 a night for a dorm bed) as guests were expected to do a chore each day.

There was also an eight-hour lock-out during the day which was a bit of a nightmare when it was rainy and freezing. You could choose your chore when you rechecked in each evening and most of them only took about 10-15 minutes so I was fine with that. I folded laundry and cleaned the kitchen.

The hostel itself was a beautiful old wooden house within a few minutes walk from town.

If you are looking for something a bit more luxurious, there are a number of hotels in town. The best rated are Alaska’s Capital Inn Bed and Breakfast, Juneau Hotel, and Silverbow Inn Hotel & Suites.

There are also a number of affordable vacation rentals like the cute Blueberry Cabin, this cozy two-bedroom apartment, the Kelli Creek cottage, and the Whale Song Cottage. 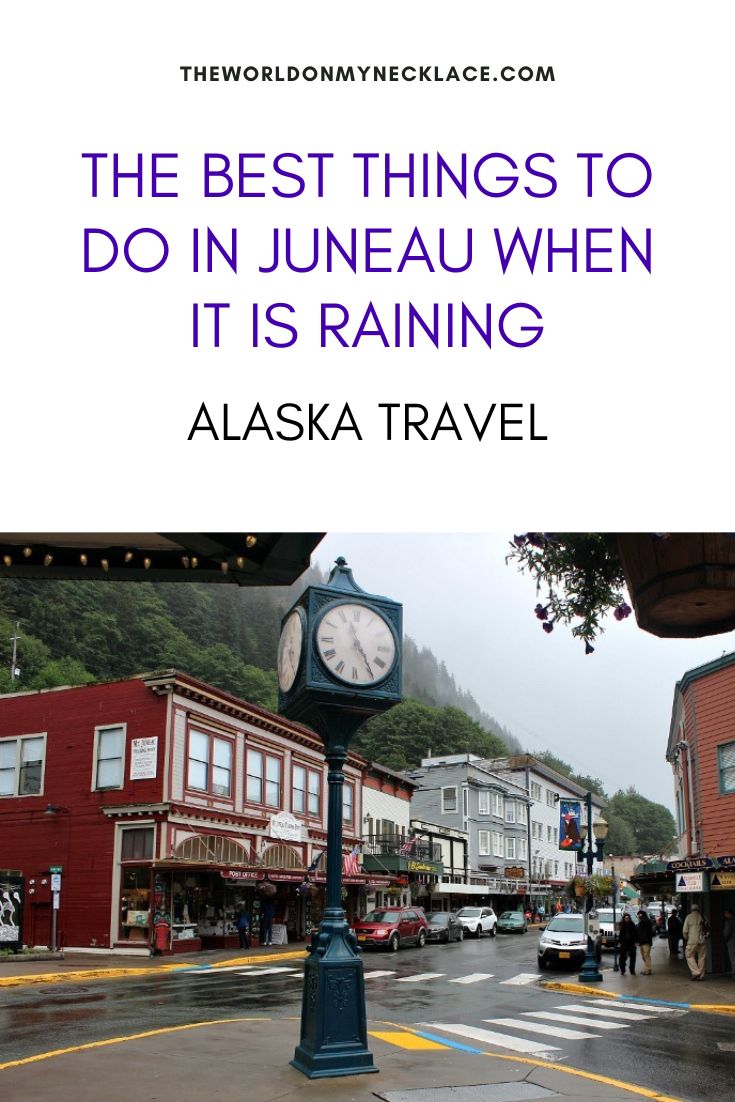 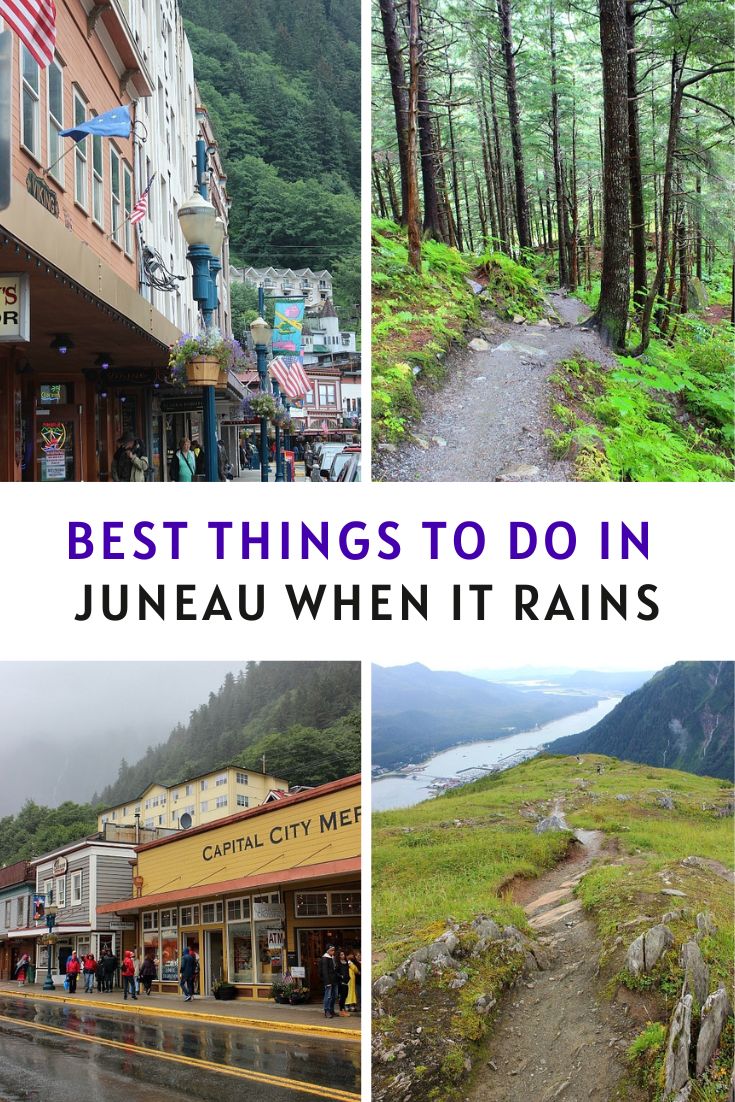 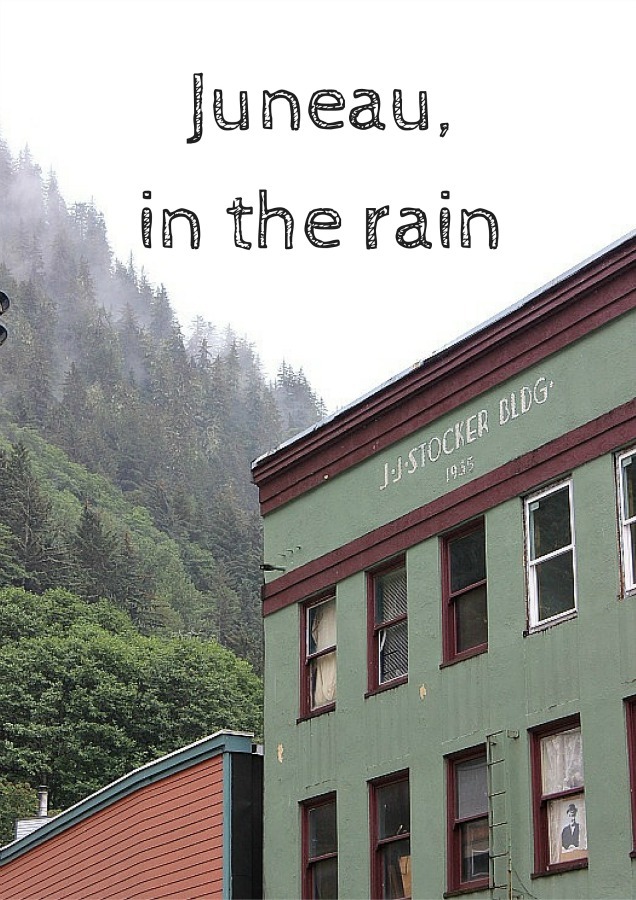