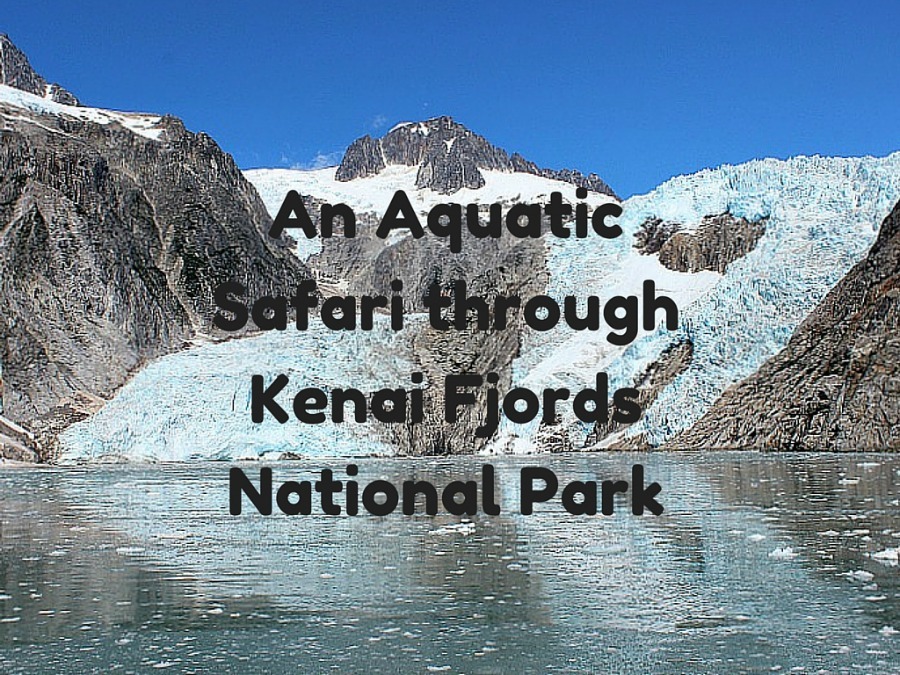 Alaska has been a dream destination for me for so long.

The reason I had put off going there until now was because I wanted to be able to afford to do a few of the incredible activities on offer, and they don’t come cheap.

I decided to finally bite the bullet this summer and go there anyway, despite not (yet) winning the lotto.

I may not have been able to afford to do all of the activities that I would like to but I did make sure I had some extra money set aside to do a couple of big ticket day tours. With so many to choose from, I kept changing my mind. Hiking to ice caves beneath a glacier or flying in a tiny plane and landing on one? Gee, life is so hard sometimes.

But one activity that I did know that I definitely wanted to do was a day cruise in Kenai Fjords National Park.

With the chance to see a large array of marine life as well as breathtaking coastal scenery, not to mention a crap load of glaciers, Kenai Fjords National Park sounded incredible. 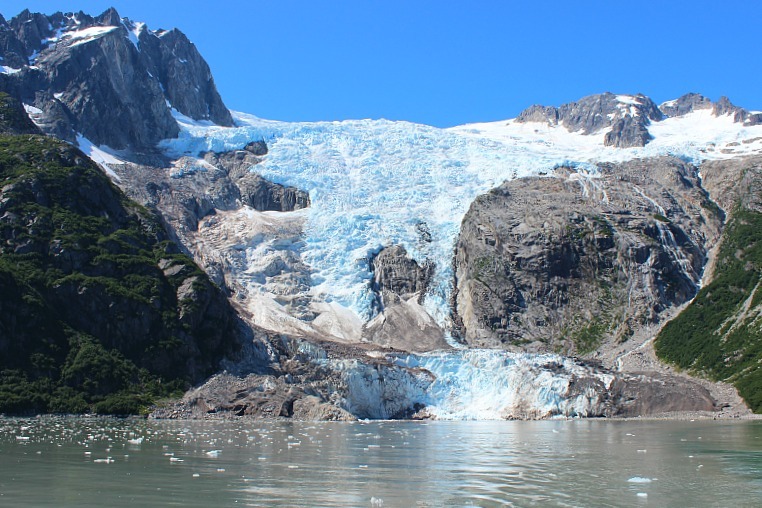 Kenai Fjords National Park was created in 1980 to protect 601,839-acres of pristine wilderness that encompasses rainforest, glaciers, fjords and the largest ice field entirely within US borders.

Sixty percent of the park is covered in snow and ice. With little development in the park and only one short road accessing it by land, the easiest way to see the park is from the water. So that was what I wanted to do.

This definitely appealed to me as the thought of being surrounded by other boats the whole day would take away from the feeling of being in the wilderness.

Setting off on my Kenai Fjords National Park Adventure

I was picked up by the Kenai Fjords Tours courtesy bus at the early hour of 8am after an evening of imbibing maybe one too many craft beers with hostel friends.

I marvelled at the beauty of the harbour as I waited to board the boat. The day had dawned bright and sunny, a god send for a day spent on the water in Alaska where temperates can rapidly drop with the onset of rain. 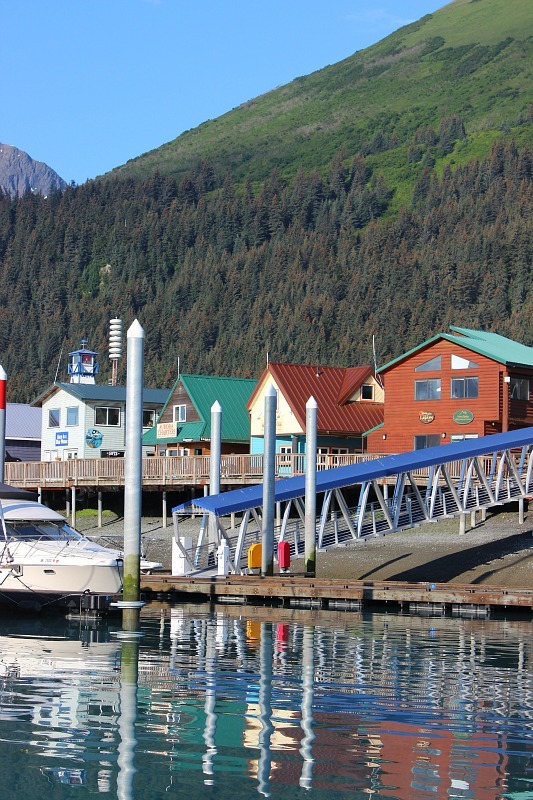 Our tour boat, the Alaskan Explorer, was a modern vessel with a small cafe downstairs, a wrap around deck, and indoor and outdoor seating over two levels. I nabbed myself a prime spot outside.

The sea was calm as we set off but as I had heard it can get quite bumpy I had taken two doses of motion sickness tablets. The rest of the day was a fight to stay awake as they ended up making me REALLY sleepy. Luckily the tour was so amazing which made it easier to keep my eyes open. But only just. Those tablets are strong.

I dosed myself up on coffee and complimentary hot cinnamon rolls as we cruised through the calm waters of the bay. 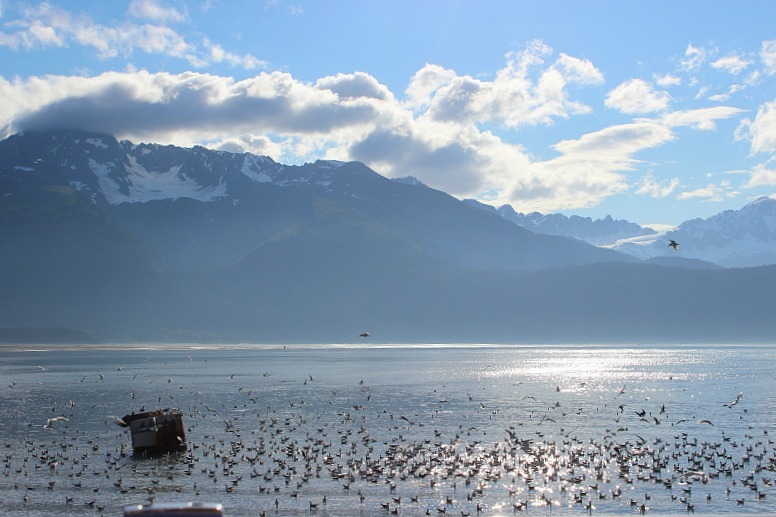 We were barely out of the harbor when we saw our first critter of the day, a lone sea otter, lying on it’s back and staring up at us as we passed by. They really are so furry and cute, how could you not love a sea otter? We saw a few more throughout the day, bobbing on the surface. 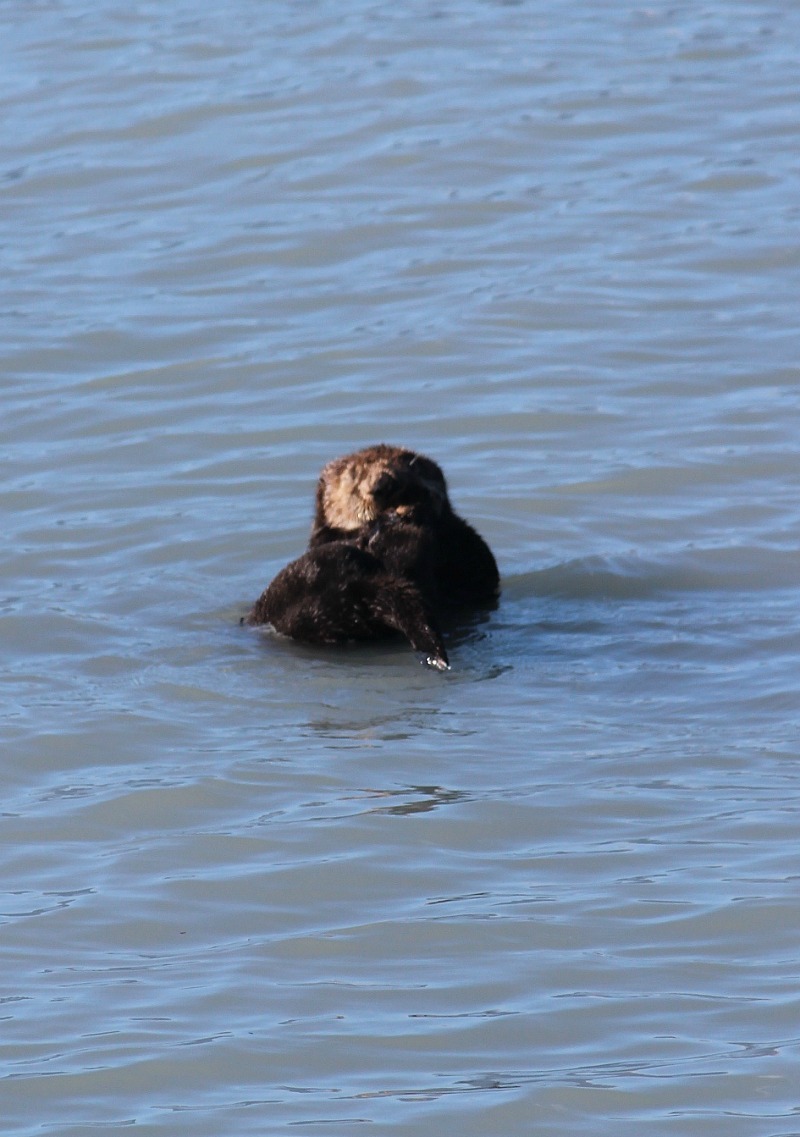 After a brief stop at Fox Island where the Kenai Fjords Wilderness Lodge is located, we were off into the heart of the pristine fjords. 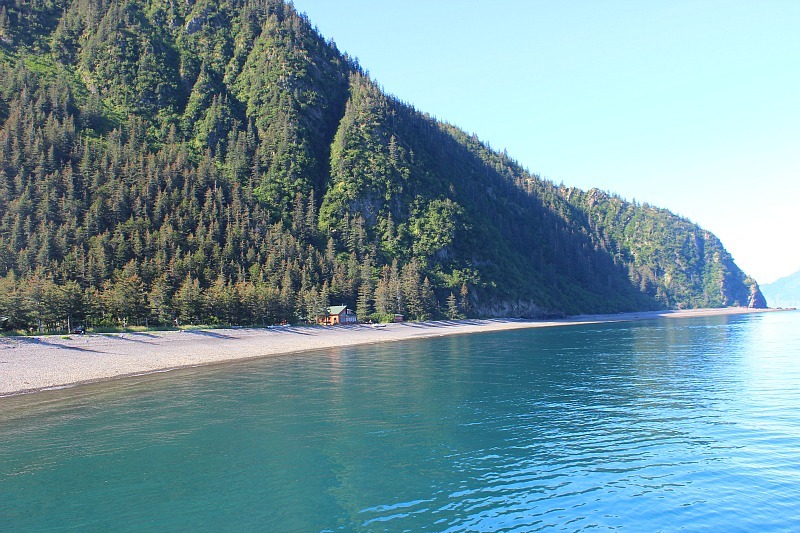 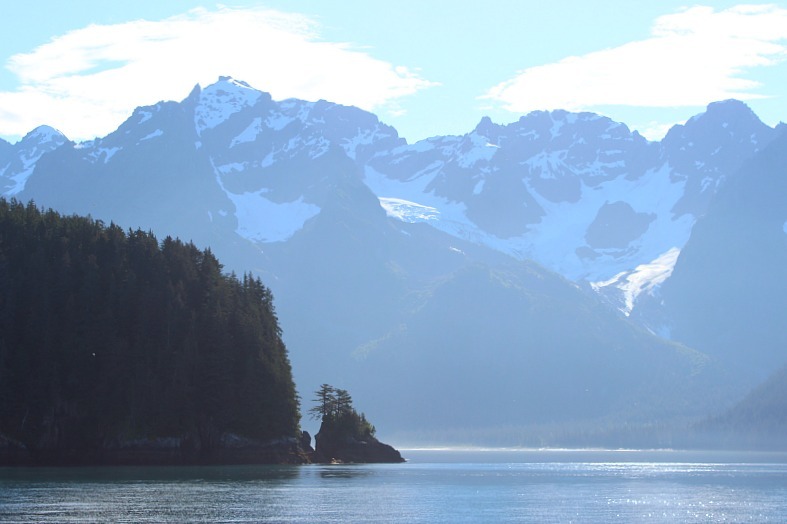 All around me there were beautiful coastal mountains rising out of the deep blue water. It reminded me a lot of Fiordland in New Zealand.

As we picked up speed the light breeze became a bone-chillingly cold wind despite it being a beautiful sunny day in the middle of summer. I couldn’t imagine doing the tour later in the season on a rainy day.

Luckily I had worn a lot of warm layers but I was still slightly regretting getting a seat outside. The cold did help me to stay awake though so that’s something.

The Captain of the Alaskan Explorer, Captain Dan, gave us loads of information about what we were seeing along the way as well as cracking a number of well-timed jokes. He definitely kept us entertained throughout the tour with his quick wit.

Resting humpbacks floated close to shore, lying on their backs with their bellies in the air.

Steller sea lions and spotted seals lazed on the rocks surrounding small offshore islands, sunning themselves, not bothered by the chill in the air. 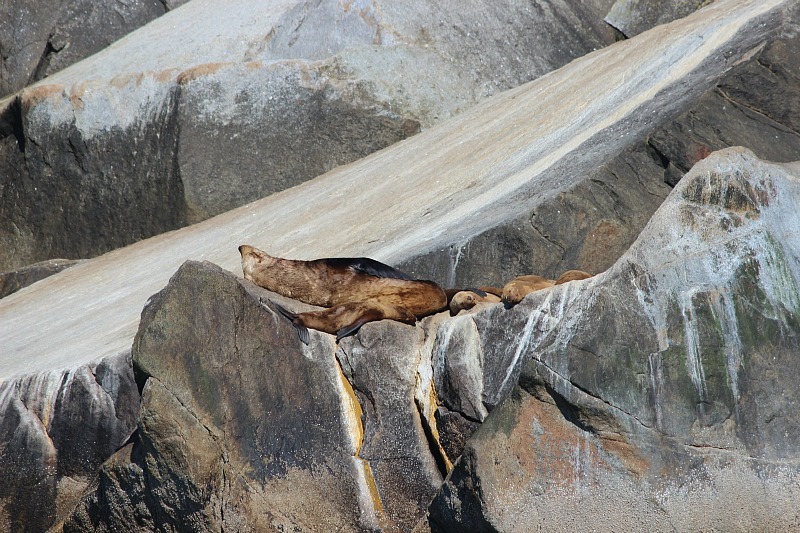 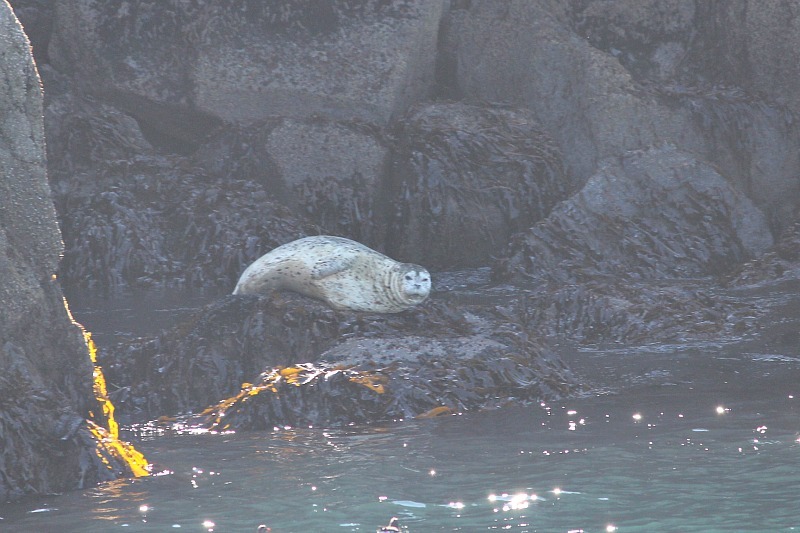 As we quietly cut through the calm seas, pods of Dall’s porpoise and dolphins followed our boat, surfing in the bow waves. Almost close enough to touch. 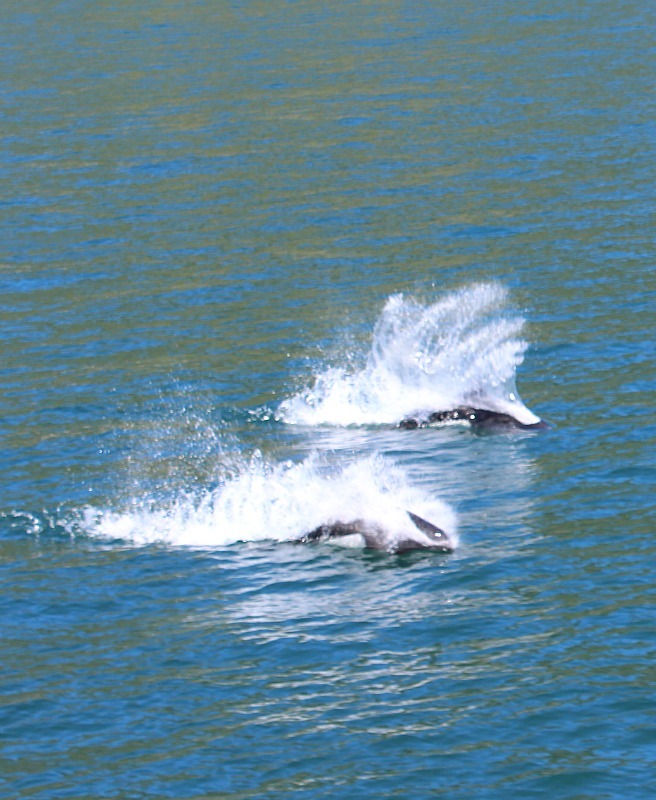 I knew within 15 minutes that I had made the right decision choosing to do a boat tour of the Kenai Fjords. I have never seen so many marine animals in such quick succession before.

As we approached a cluster of granite islands rising at steep angles out of the bay, I could see some crazy looking birds flying above us and to their nests in the island’s rocky alcoves.

They were puffins, and there were hundreds of them. There are two different types of Puffins that live in the Kenai Fjords: Tufted puffins and Horned puffins. They are such comical little birds – flapping their little wings in earnest, about as graceful and portly as flying pigs. 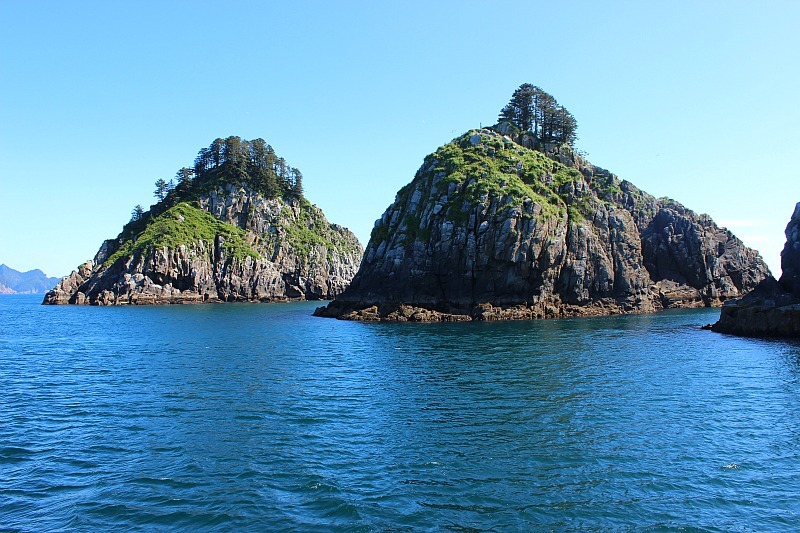 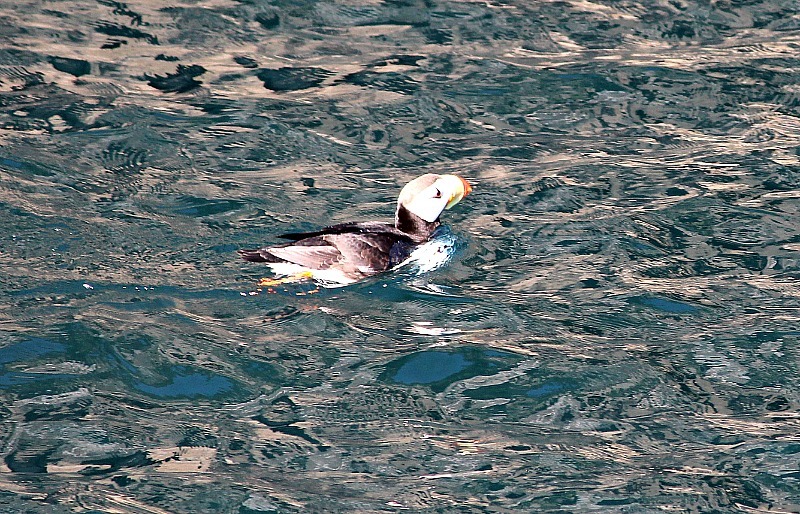 Perhaps my favourite marine life spot of the day was the pod of orcas we saw near the entrance to one of the fjords that we passed. I find orcas such majestic creatures and watching them slowly glide along the coastline was enchanting.

At one point one of them was coming straight towards our boat before disappearing briefly then reappearing on the other side of us. It was pretty special. 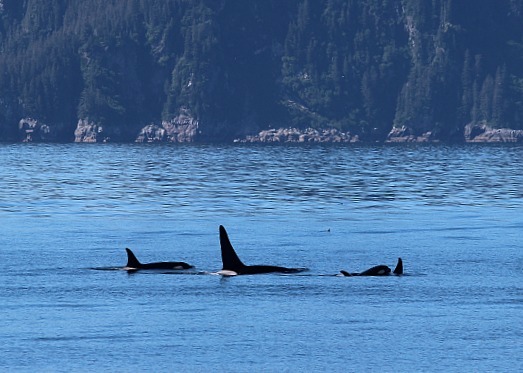 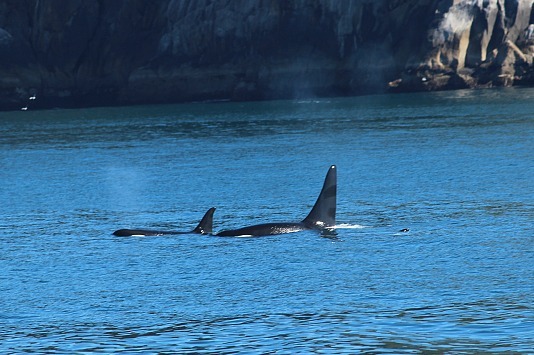 Lunch was a chicken caesar wrap, sun chips and a granola bar. Nothing fancy but we weren’t there for the food.

Leaving the handful of other tour boats behind, we began the journey into Northwestern Fjord. This is what I had been waiting for.

There were glaciers on either side of us as we traveled deeper into the fjord, but the Northwestern Glacier at the end of the fjord was the most impressive. Small icebergs began surrounding the boat the closer we came to the icy cliff face.

Seals floated on some of the larger icebergs around us, occasionally glancing up from their slumbers to curiously stare at us. It all felt surreal. 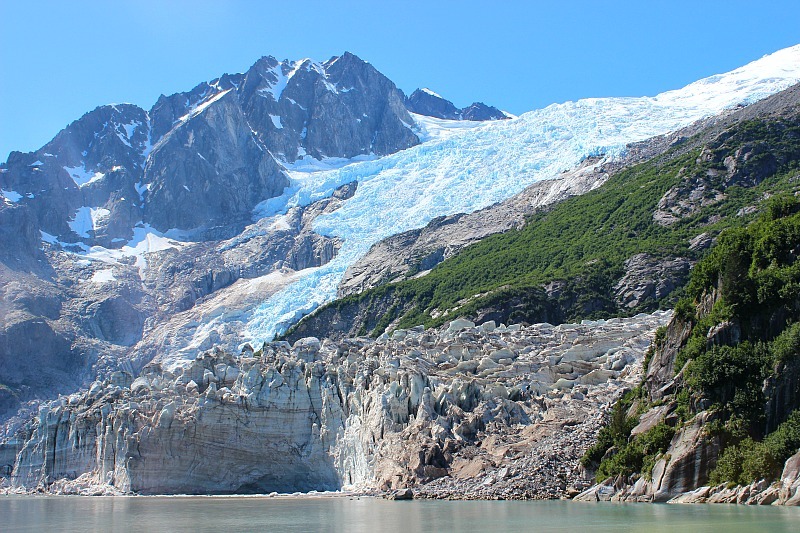 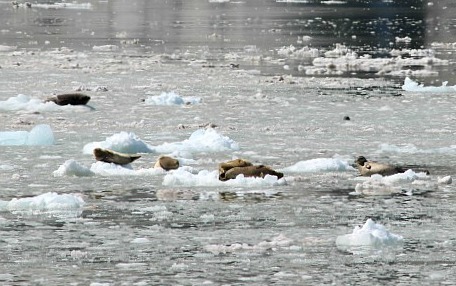 Once in front of the mighty glacier the sheer size and grandeur of it was almost impossible to comprehend. Every few minutes we would hear a roar like thunder – it was ice breaking off the glacier face and careening down into the icy water below.

We watched the glacier face for about 20 minutes and saw ice calve off it about five times. I will never forget that sound. 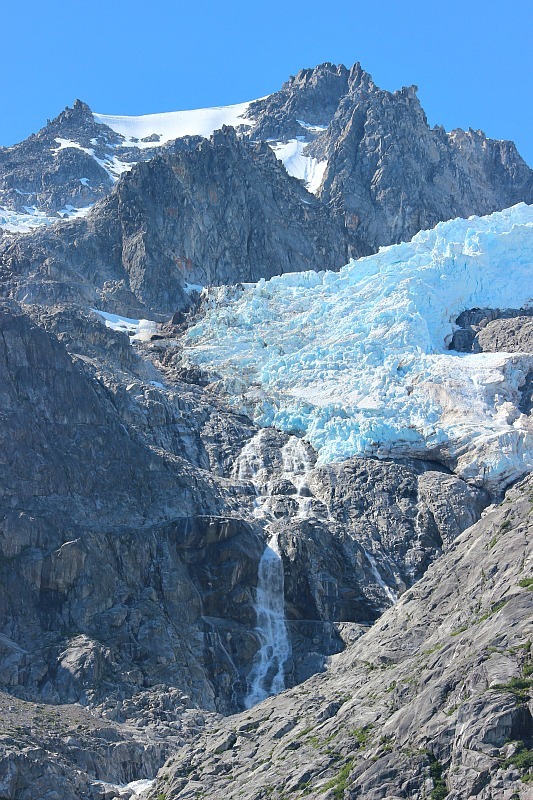 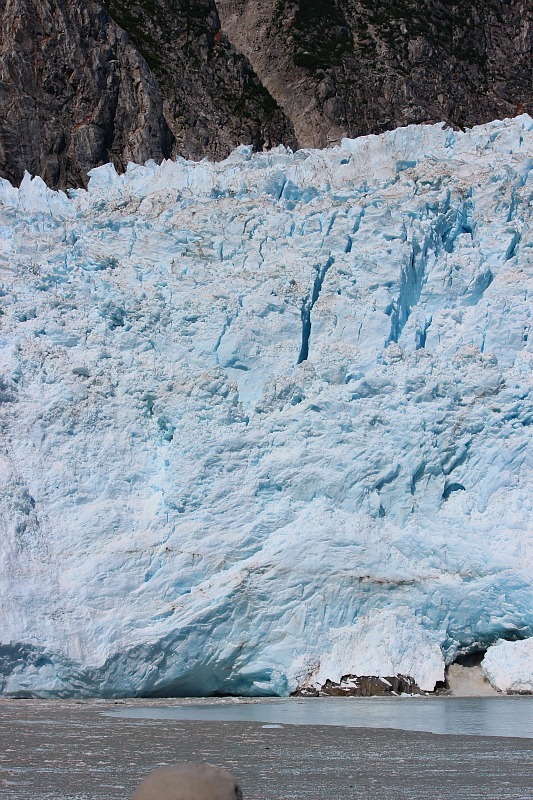 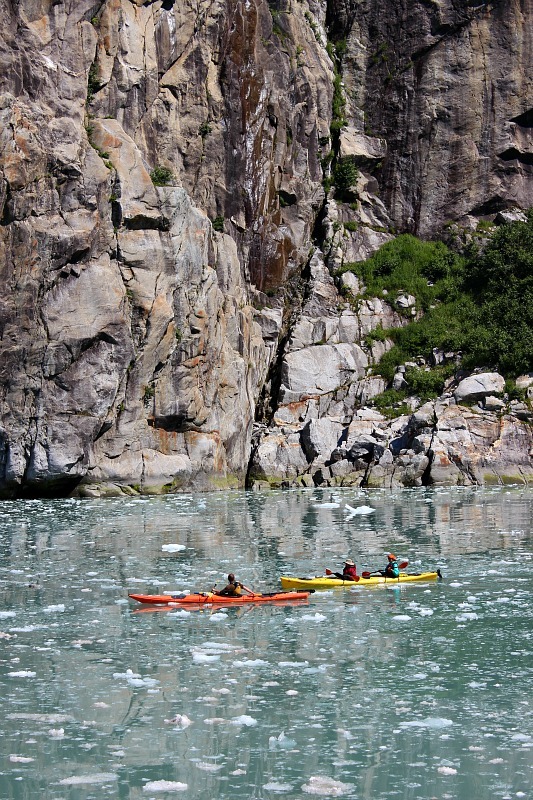 Captain Dan said we could see even more calving if someone was willing to jump in the water with a wetsuit and a crow bar. Funnily enough, nobody volunteered.

On the way back out of the fjord we passed tiny forested islands. The boat pulled into Cataract Cove, a small inlet with a waterfall. We got right under it, straining our necks to look at the water cascading down the rock face from above us. 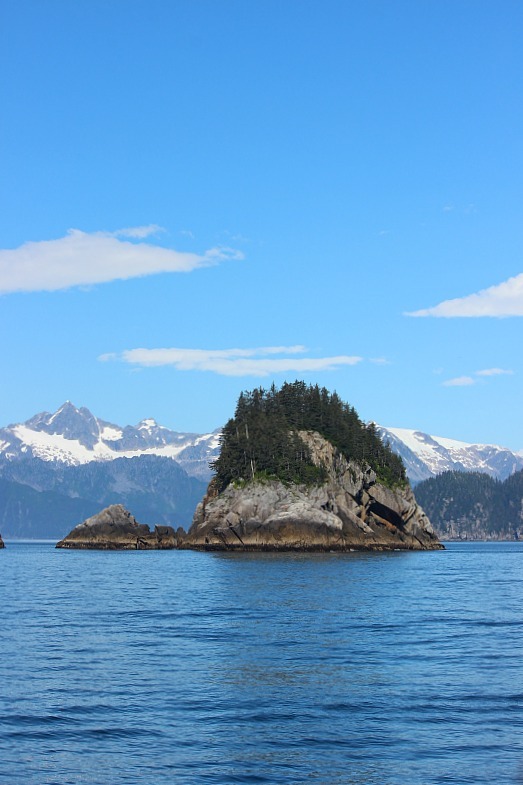 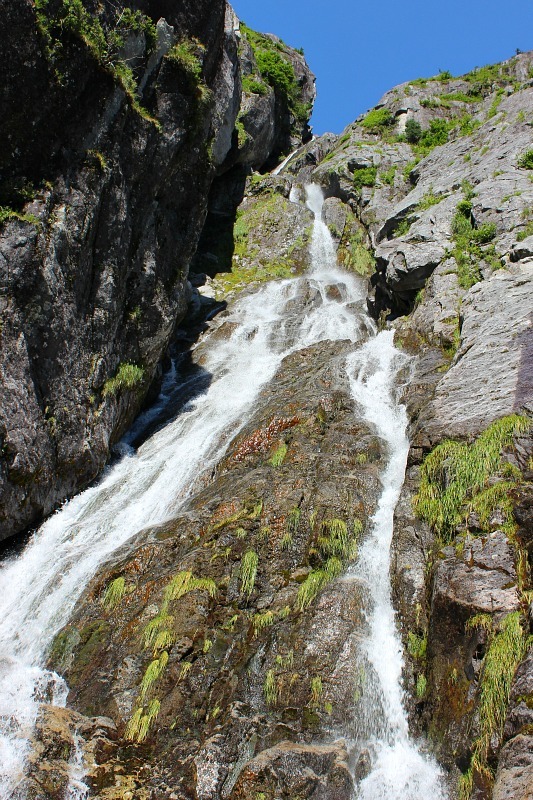 At this point I couldn’t fight the urge to sleep anymore so I retreated inside to take a little nap. A short time later a commotion woke me: Fin whales had been spotted.

Apparently it is unusual to see them so close to shore as they are usually further out at sea. We even saw a fluke, where whales raise their tails out of the water like they are waving, which is also not normal behaviour for Fin whales. Lady luck kept shining on us that day. 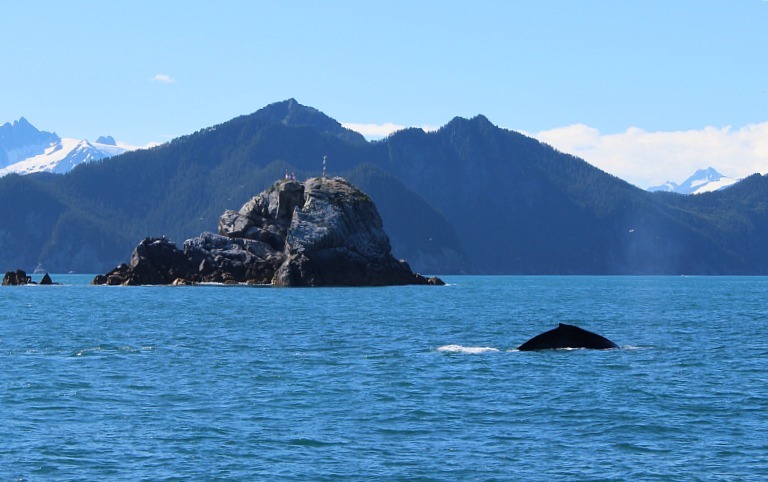 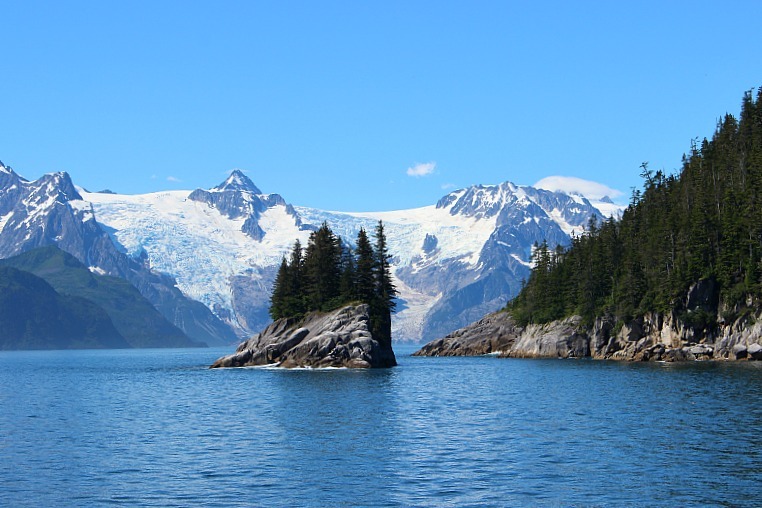 We also saw a pod of humpbacks on the way back but no flukes which is unusual for them as they are usually fluking all over the place. Oh well, you can’t win them all.

Arriving Back to Civilization

And then we were back at the dock, our heads spinning from the amazingness of the day. I still can’t quite believe the diversity of marine life I was able to see. It really was like going on an aquatic safari.

I honestly don’t know how any boat trip could possibly compare to my experience cruising the Kenai Fjords – what can beat seals floating on icebergs? Glaciers calving in front of my eyes? Pods of orcas frolicking within spitting distance of our boat?

Not much I suspect.

Thanks to Kenai Fjords Tours for the discount on the Northwestern Fjord Tour. All opinions are honest and my own. Seriously, it was freaken amazing. 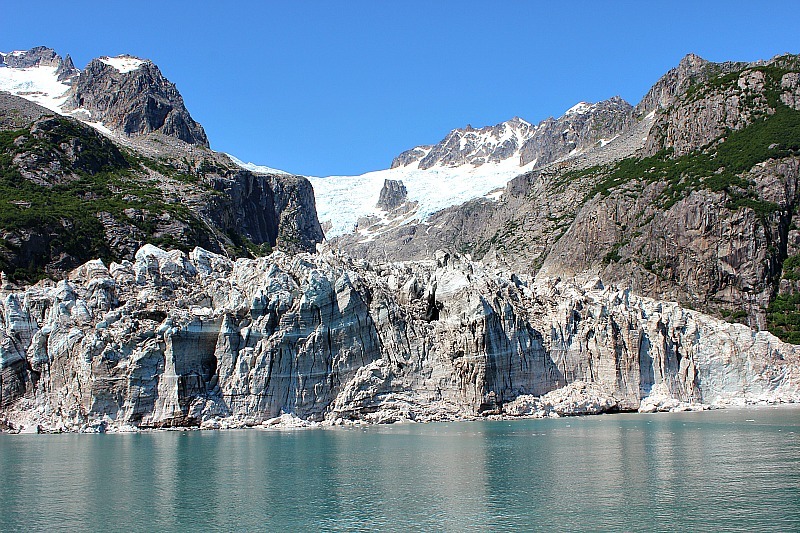 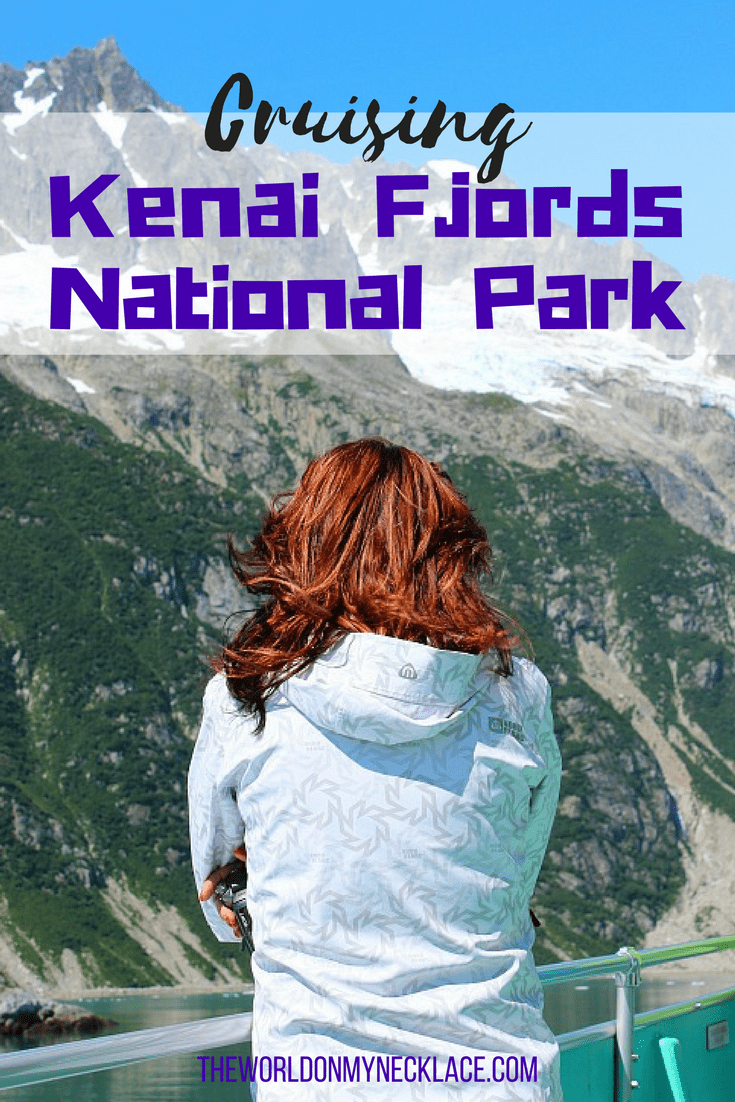