Islands of the World, Thailand
This post may contain affiliate links. If you make a purchase through an affiliate link, I will earn a commission at no extra cost to you. Thanks for your support. 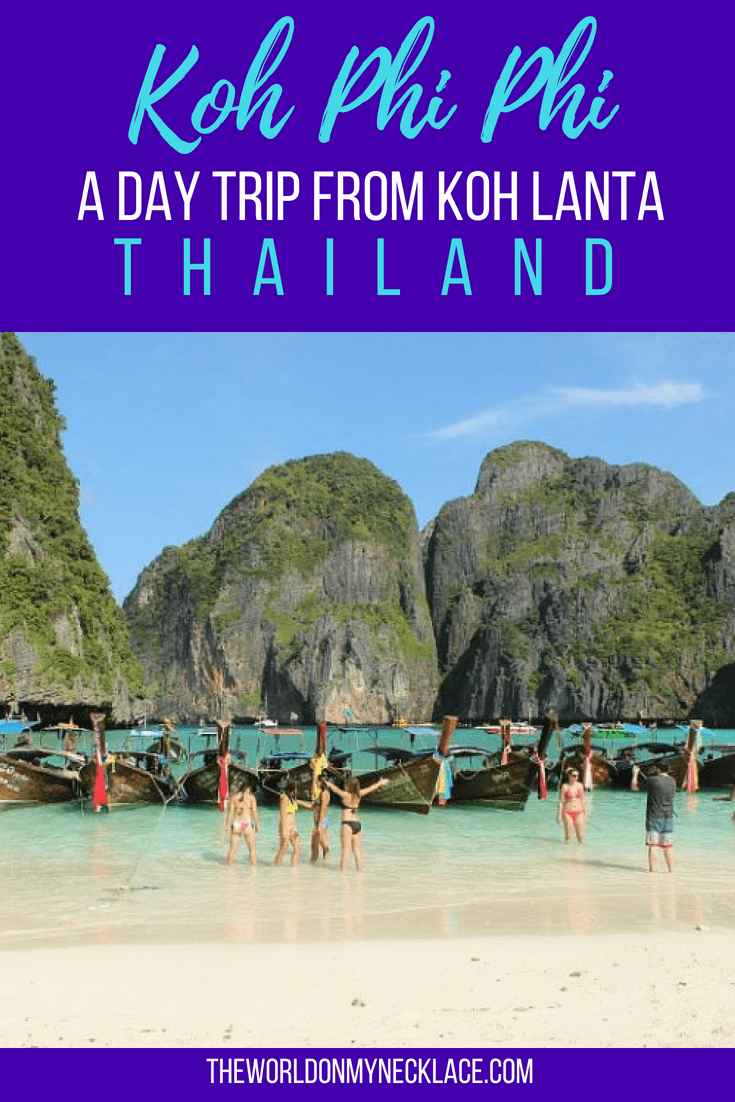 When I first travelled to Thailand I had a few ideas of places I wanted to go and things I wanted to see, and a Koh Phi Phi Island tour was definitely on that list.

I knew it would probably be a mistake to stay on Koh Phi Phi, an island made famous by the movie ‘The Beach’.  What was once a quiet island paradise was quickly destroyed by the consequent tourism boom that followed the fame of the movie.

But I REALLY wanted to see ‘the’ beach. 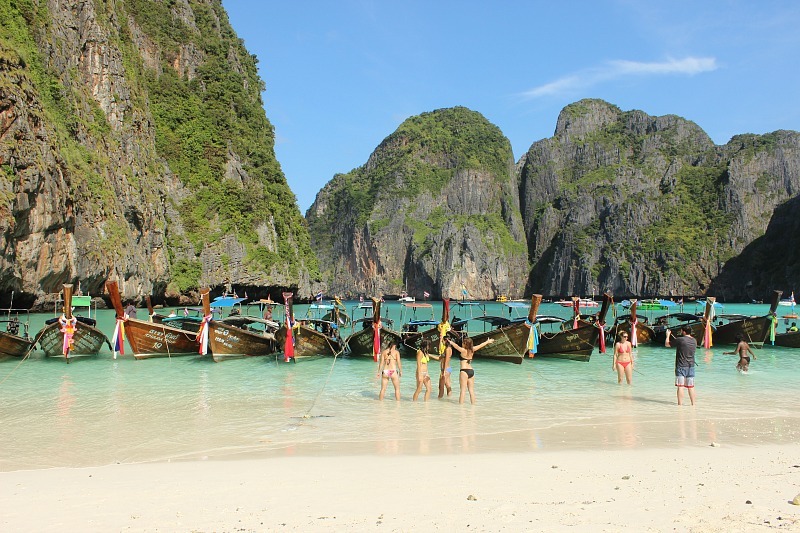 Koh Phi Phi is actually six islands. Koh Phi Phi Don is the largest island and is home to the horrors I mentioned above. Koh Phi Phi Leh, the second largest in the archipelago is home to Maya Bay, where ‘The Beach’ was filmed, and is a National Park.

Although there is very little development on the island, a ridiculous number of day trips are allowed to visit.

And in the end that is what I decided to do. Do a Koh Phi Phi Island tour that visits Maya Bay as a day trip from Koh Lanta.

There are a few different Koh Phi Phi Island tours to choose from, but I ended up picking one of the more expensive ones that went by speedboat rather than long tail.

After my scary experience a few days previously on the Four Island Tour, I wasn’t so keen to get back on a long tail again so soon.

The Koh Phi Phi Island tour would visit Maya Bay on Koh Phi Phi Leh, Bamboo Island and lastly, Koh Phi Phi Don. I didn’t want to stay there but I was interested to see if it was as crazy as I had been told.

The speed boat picked me up right from Long beach, pulling up to the sand. Then we were hurtling towards the first stop of the day, Maya Bay on Koh Phi Phi Leh. 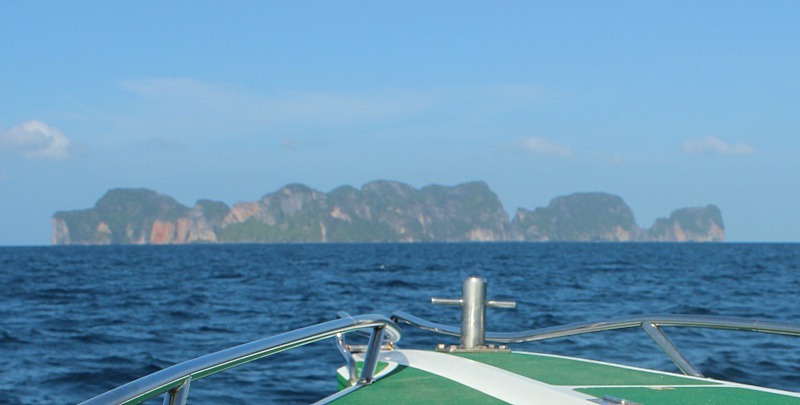 We bounced across the waves, the iconic island looming large as we approached. Rounded limestone cliffs coated in green towered around us as we entered the calm waters of the bay. Other boats crowded the shore as we pulled up to the beach. THE BEACH!

I couldn’t believe I was finally there, seeing it in the flesh. It looked just like it did in the movie except for all of the boats and people of course. 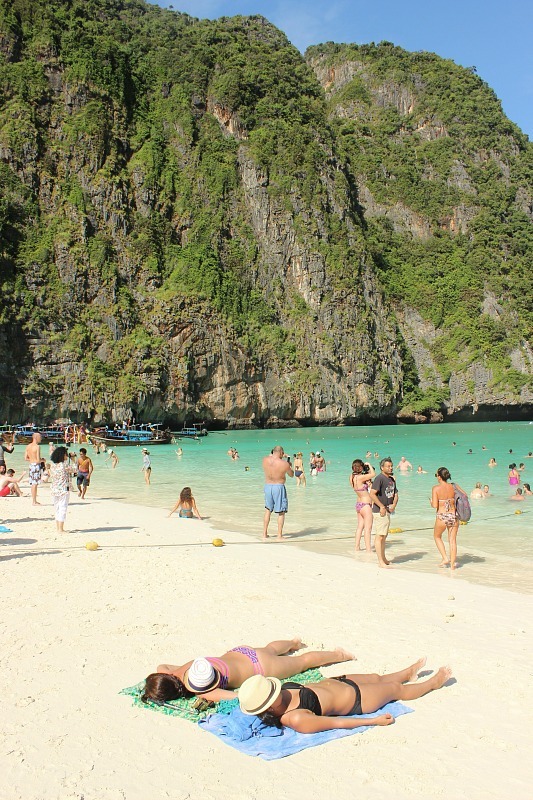 And there were lots of boats. We arrived around 9.30am and I had heard that the crowd peak is around midday. The beach was crowded but it wasn’t impossible to get away from other people. Of course it would have been better with fewer people but it didn’t ruin the experience for me.

The place was just so damn beautiful.

We had about an hour there and I used that time to swim, sunbathe and wander around the back of the beach where there was a short trail through the jungle.

There was no one else back there. Along one side of the beach were overhanging caves and the sheltered beach around there was also devoid of people. 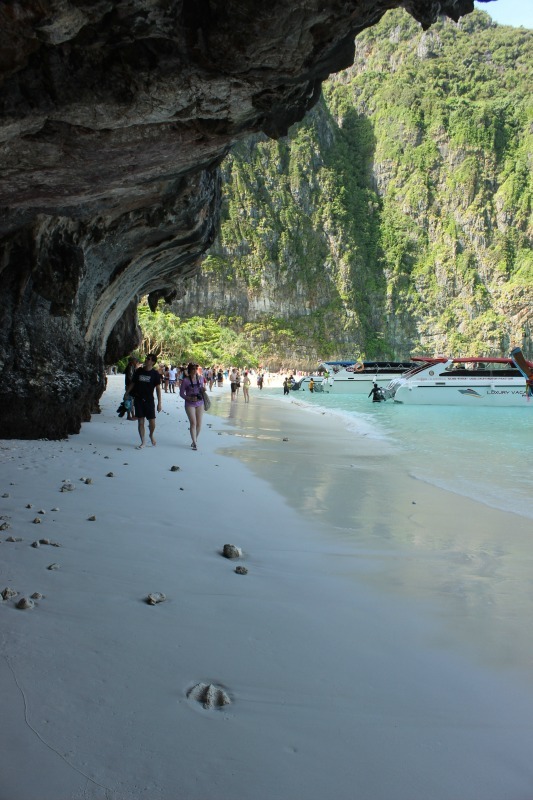 And then it was time to meet back at the boat for the next stop of the Koh Phi Phi Island tour: Snorkelling off the shores of Koh Phi Phi Don.

This stop was the most disappointing for me and actually quite sad. Murky water with lots of rubbish floating around, zero coral, and barely any fish in sight made snorkelling there a lacklustre experience and not worth doing.

I imagine that these waters may have once matched the pristine underwater environs around Koh Lipe but now, after years of overuse and rampant, unchecked development on Koh Phi Phi Don, the waters were now desolate of life.

After that sad little stop-off we continued on to Bamboo Island, home to a gorgeous white sand beach that stretched around the tip of the small island. Like Maya Bay, there were a lot of other tour groups there which wasn’t ideal. 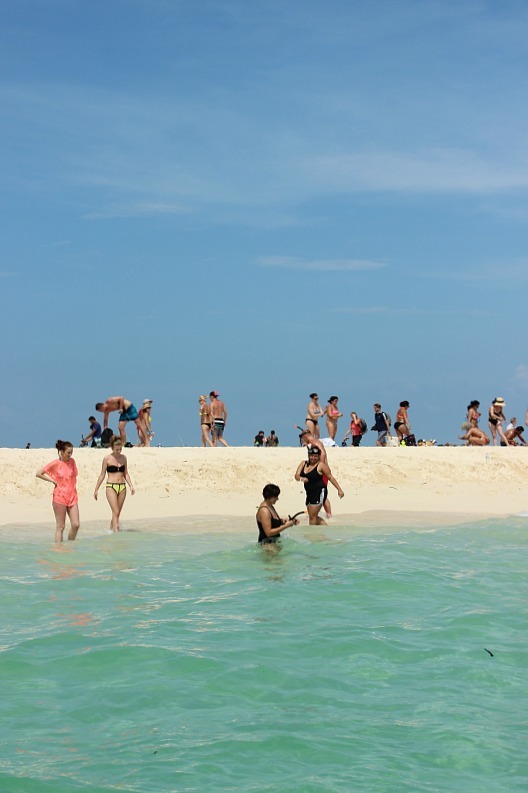 The guides set out a delicious massaman curry with fresh fruit on the beach for us for lunch then we spent the rest of the time on the island swimming, sunbathing and walking around the beach.

I tried to imagine what it would be like empty and quiet but that was a hard feat. I bet it would be a peaceful paradise if you somehow managed to find it deserted. 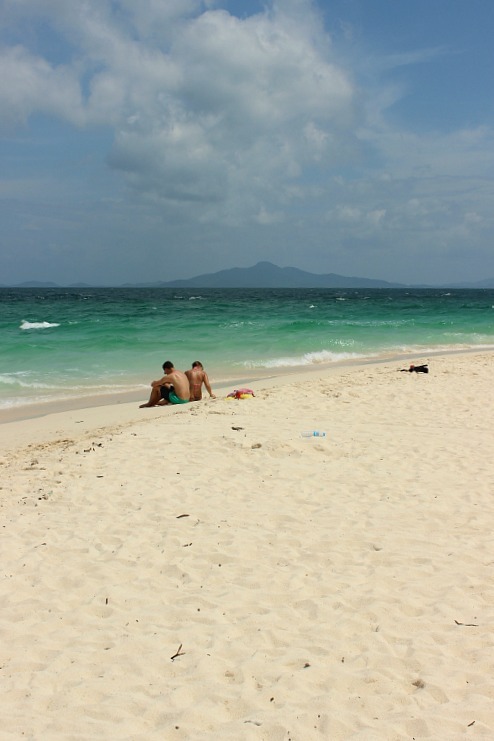 The last stop for of the Koh Phi Phi Island tour was big, bad Koh Phi Phi Don itself. We only had an hour there so my plans to climb up to the viewpoint over the two bays were quickly laid to rest.

Instead I wandered the main street with the hoards, dodging touts along the way. The place was rammed with shops, everyone trying to make a buck off the many tourists that come here. It reminded me of the culture wastelands of Europe like Magaluf and the south of Tenerife. 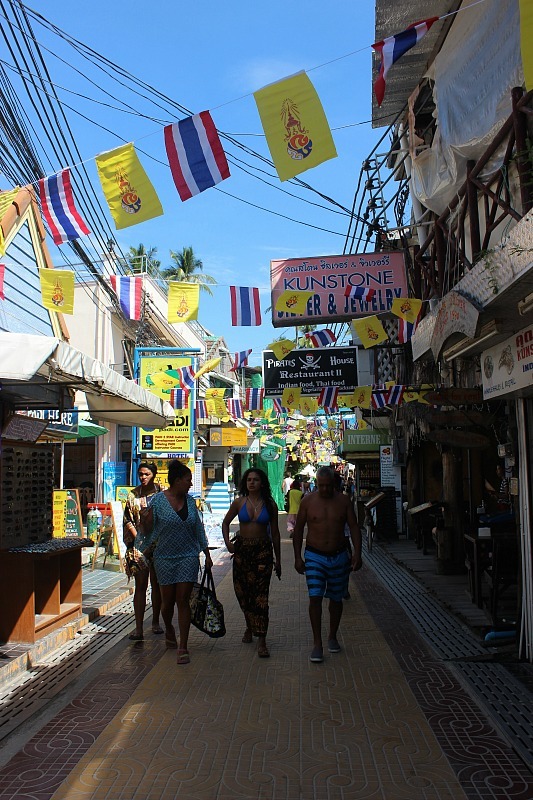 After the unhurried and casual vibe of Koh Lipe and Koh Lanta, this was a nightmare.

But it was a beautiful spot and if it had been managed in a more sustainable way, I could definitely see myself staying there. Such a shame.

One last dip in the ocean from a beach near the dock on Koh Phi Phi Don concluded my day trip, then we were on the way back to the sleepy shores of Koh Lanta. I was glad to go. 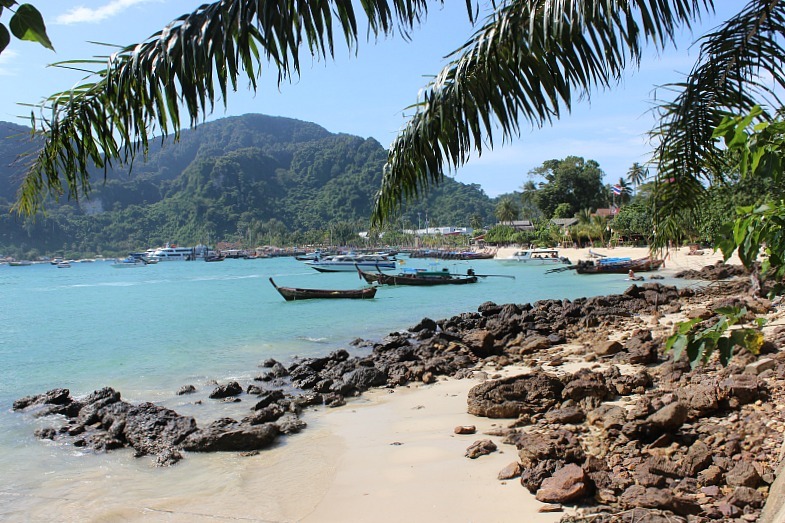 It may have been crowded but I am so glad I got to see Maya Bay, it really was as beautiful as I hoped it would be. Maybe one day they will limit the boats visiting this place, then it would truly be magical.

And Koh Phi Phi Don: I won’t be seeing you again anytime soon unless you change your hedonistic ways.

Have you done a Koh Phi Phi Island tour? Did you love it or were the crowds too much?