I had heard good things about Koh Lanta. How it wasn’t full of tourists and that it wasn’t overly developed. That the locals were still friendly, not jaded like on some of the islands that have been engulfed by tourism. How it had a peaceful vibe, great food and beautiful scenery.

It sounded like my kind of place, and it was. But I didn’t love it straight off the bat.

Unlike Koh Lipe, an island I loved for its diminutive size, its astoundingly beautiful beaches, and its attractive walking street, Koh Lanta didn’t seem so enticing when I first arrived.

Koh Lanta is a much larger island, in fact at over 30km in length it is one of the largest Thai islands in the Andaman Sea. For affordable accommodation, most backpackers stay in the Long Beach area which is where I decided to base myself.

Other than visiting the beach and doing day tours, you really need to hire a scooter to see more of the island. An alternative is to catch a tuk tuk or taxi, but for longer distances this isn’t exactly cheap. It is definitely not a walkable island.

Kerry had left to go back home to South Africa the same day that I travelled from Ko Lipe to Koh Lanta and as it was my first time travelling alone in Thailand and because I was going to be arriving in the evening, I booked two nights in a dorm room at the Metallic Hostel in Long beach. On first impressions, Long Beach was nothing to look at. There wasn’t really a town centre as such, just a strip of ugly restaurants, mini marts etc along a busy highway. I was disappointed but I was yet to see the beach.

On a more positive note, the guy that worked at the Hostel was super friendly and I made friends with my hostel dorm mates pretty quickly, going out for dinner with a group of them on my first night.

My first day on the island, me and one of the girls I had met went over to the beach for lunch and a swim. The beach was nice but it had nothing on the beaches of Koh Lipe.

The sand was more of a dirty yellow and the water was not as clear. That afternoon it rained for hours so I was stuck in the hostel to escape the deluge. Koh Lanta was still yet to wow me. I didn’t know if I wanted to stay much longer on the island.

On my second night, a few of us went over to a small and popular restaurant across the road from the hostel for dinner and there we met a German girl that we started talking to. She was staying in her own bungalow at a small family run place called Coconut Home.

It had a private bathroom (with hot water!), a small deck with hammock, and wifi for the same amount I was paying to stay in a six bed dorm. And it was closer to the beach.

I checked out the place the next day and loved it, paying for two nights up front. After a disastrous day on a Four Island snorkelling trip where we encountered cold, wet weather and survived a scary boat trip on angry seas, I was relieved to check into my own little house that evening, where I could relax my frayed nerves. Turns out that Long beach does have an area with more of a community feel and Coconut Home was right amongst it. Smile Cafe next door did excellent coffee. The mini mart was a fun place to buy cheap beers and sit outside meeting other travellers.

There were a handful of rustic restaurants and bars, travel agents, cheap accommodations and even funky boutiques along the dirt road heading towards the beach.

Along the beach there were also a lot of great spots with amazing pizza at Mr Wee’s, and fire dancers performing every night outside Why Not bar. Away from the strip mall along the main road, Long beach was pretty cool.

Liam, one of the guys I befriended at the hostel, moved over to the bungalow next to mine and we made friends with a couple of German girls in the bungalows adjacent to ours. I ended up staying five more nights on the island in that little bungalow and it was my favourite accommodation of all of the places I stayed during my one month in Thailand.

I sat for hours on my private deck, catching up with stuff online and reading when it rained my entire third day on the island. The weather Gods had not been on my side thus far but I didn’t mind when I had a comfortable spot out of the rain.

A brilliant red woodpecker provided entertainment when it consistently tried to peck a hole in one of the bungalow windows across from me throughout the day.

The next day I woke up to more rain. I started to think that maybe I should move on but then finally, in the afternoon, it started to clear. It was time to see more of the island.

There were kitties everywhere when we pulled up, some in good health and others, not so much. I spent a good hour just making my rounds with them, giving them lots of love. If you arrive early in the morning you can take one of the dogs for a walk but as it was the afternoon, we just hung out with some of the dogs in their kennels instead. Then we got to meet some gorgeous puppies.

Unfortunately our soothing visit was cut short when two of the puppies started attacking each other, and I mean REALLY attacking. It took four people to get them off each other with one of the girls getting bitten in the process. Both of the puppies had big wounds where they had latched on.

Who knew puppies could be so vicious!? I am still very much in the cat camp, even more so after that.

We cruised along roads bordered with long grass and fragrant flowers, through small settlements where locals and tourists mingled, and through lush green jungle. Finally I saw what the fuss was all about with Koh Lanta and I was so glad that I stayed to uncover its charms. We stopped near Kantiang in the south of the island to do a short hike through the jungle to a waterfall. The hike itself wasn’t spectacular, neither was the waterfall, but it was nice to be stretching my legs and I was happy to be outside without being rained on.

That evening it was Loy Krathong, an important Thai festival held on the night of the twelfth lunar moon, which is usually in November. To pay respects to the goddess of water, people gather to release lotus shaped boats, decorated with candles, incense and flowers, into bodies of water.

On Koh Lanta, celebrations for Loy Krathong were being held in Lanta Old Town so Liam, the two German girls and I arranged a taxi to drop us off and pick us up so we could be a part of this traditional festival. We arrived early to check out the Old Town. There is a long wharf where fishermen and tour boats depart from and a short main street filled with 100-200 year old teak buildings, some on stilts over the water.

The buildings were quite beautiful and like nothing I have seen before. There was a parade down the main street to the festival grounds near the wharf. I loved the elaborate costumes and traditional music. We spent time browsing the souvenir shops then had a drink as the sun was setting at a roof-top bar overlooking the harbour. Then it was time to check out the festival.

The festival grounds were bustling with people; locals and tourists alike. There was a lot of delicious street food, market stalls selling all kinds of things from kitchen utensils to cheap clothing to souvenirs, and even a fashion show.

We had imagined that there would be a mass release of the lotus boats but after waiting around for a while, we noticed that a lot of people were just doing their own thing.

The German girls released their lotus boats into the water from the wharf steps, making wishes, lighting the candles, and then watched them float away. My favourite day of my week on Koh Lanta ended up being the last day that I spent on the island. I hired a scooter for the whole day, first driving south to the sleepy hamlet of Kantiang, perhaps my favourite village on the island.

The Drunken Sailor is a fantastic cafe there with hammock chairs and chill out sounds that does great coffee and breakfast, and the beach is one of the most beautiful on the island.

After breakfast I headed to the southernmost point of Koh Lanta: Mu Koh Lanta National Park. The park is home to a perfect golden crescent beach, overlooked by a simple white lighthouse.

There is a short (but strenuous in the sticky heat) two km one-way hiking trail through the jungle which is a great little hike to stretch your legs. The monkeys and giant monitor lizards hanging out in the park are also pretty cool to see, with the lizards definitely the biggest I have ever seen! Bamboo Beach, between the park and Kantiang, was my lunch spot for the day. I loved the quiet jungle backed beach with its calm waters; perfect for floating in. I parked my scooter at the top of the bay and walked down and around the flat rocks jutting out of the sand. It was my favourite beach on the island. And the perfect end to the perfect day? Watching the sunset back on Long beach. With just the right amount of clouds in the sky, the sunsets at Long beach were unbelievably beautiful. It is worth coming to the island for them alone. Although I ended up spending a week on the island, the longest I stayed anywhere in Thailand, I could have happily spent more time there. Even if it was just to return to Kantiang and Bamboo Bay day after day. And to catch more spectacular sunsets at Long beach.

It may not have been perfect but damn, I had a great time on Koh Lanta.

I can’t wait to return.

Have you been to Koh Lanta? Did you manage to see more of the island than just Long Beach? 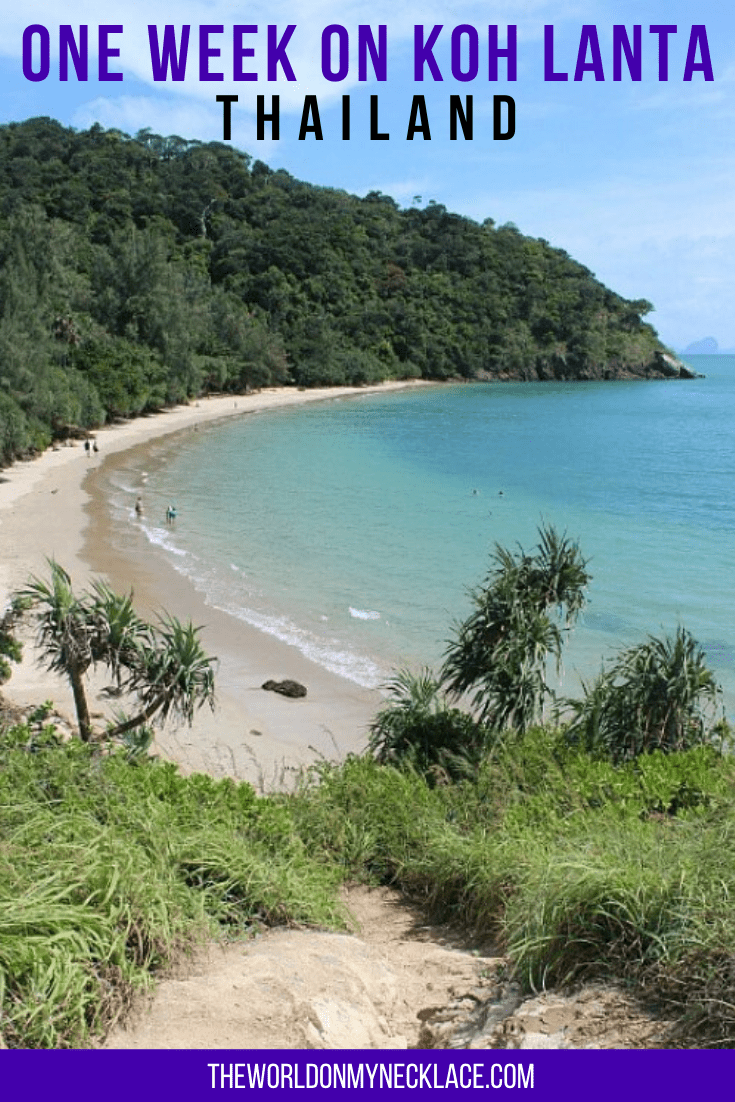 2 Comments on Koh Lanta: The Imperfect Island of my Dreams