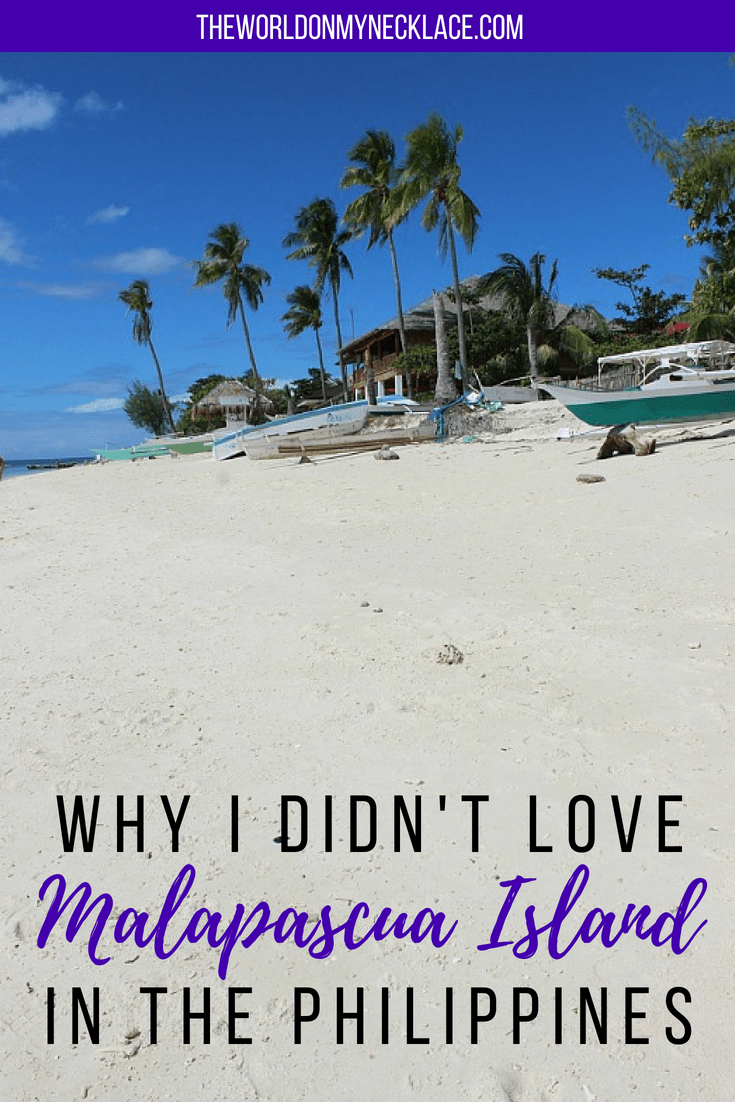 The first time Malapascua Island in the Philippines popped up on my radar was when a British expat, who lived on the island and owned one of the dive shops, was murdered there.

This didn’t stop me wanting to visit, but it could be one of the reasons why my time there felt clouded with unease and figurative black clouds. But there were other reasons too.

Our long journey to the island began with a taxi ride to the airport in Manila then an early morning flight to the island of Cebu. Arriving in Cebu we had to catch another taxi to the bus station then a bus to the northern tip of the island. From there, boats leave regularly, once full, to tiny Malapascua Island. 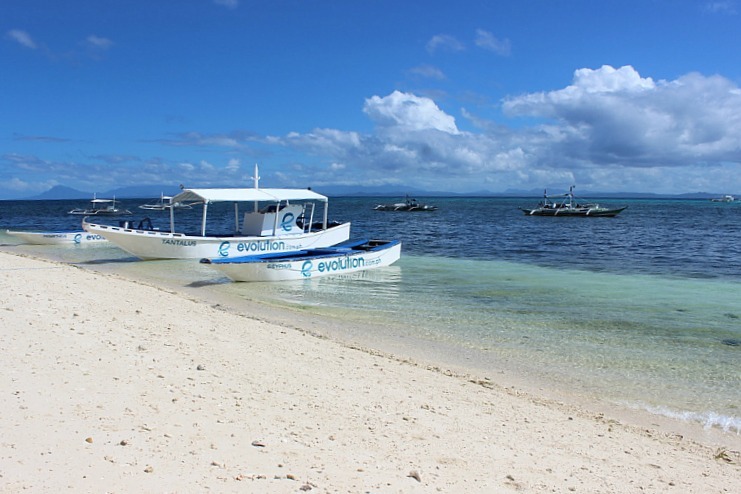 It was a long day of travel and it wouldn’t be without its issues. But more on that in a moment.

The Philippines is made up of thousands of islands, each offering something different in regards to scenery, culture and activities. Malapascua Island’s main draw: diving with thresher sharks.

This small, mostly undeveloped island, only 3km by 1km in size, is one of the best places to dive in the Philippines and that is why most people visit.

But I’m not much of a diver. I have my Scuba Diver PADI certification – this is the lowest PADI cert you can get. I have dived in South Africa and Egypt, and I enjoyed those experiences. But I never really fell in love with it. I just don’t think that diving is for me.

So you may be thinking, why did you go to a small island that is primarily known for diving and that is difficult to get to when there were thousands of other islands to choose from? 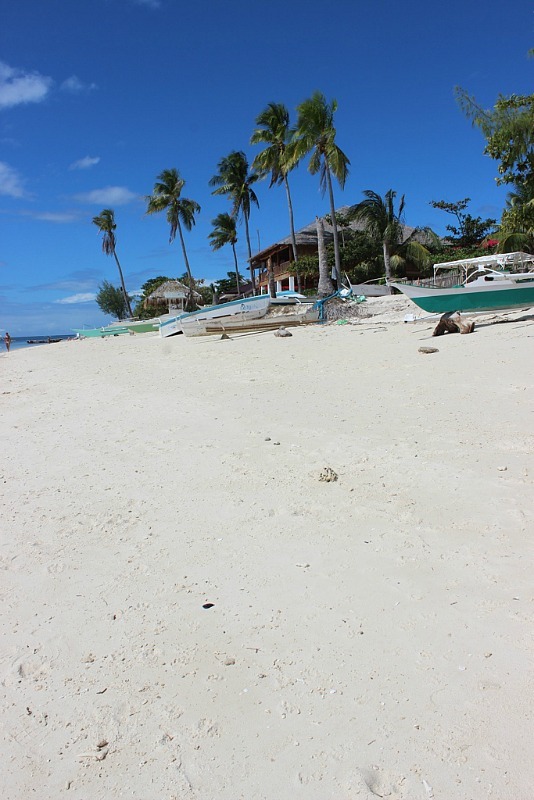 Malapascua Island’s beaches. I had seen pictures of the stunning white sand beaches and invitingly calm waters in travel guides and on blogs. The flights were also reasonably cheap to Cebu in comparison to most of the other islands that I was interested in visiting.

So it was done, we were to spend four nights on this tiny diving island. 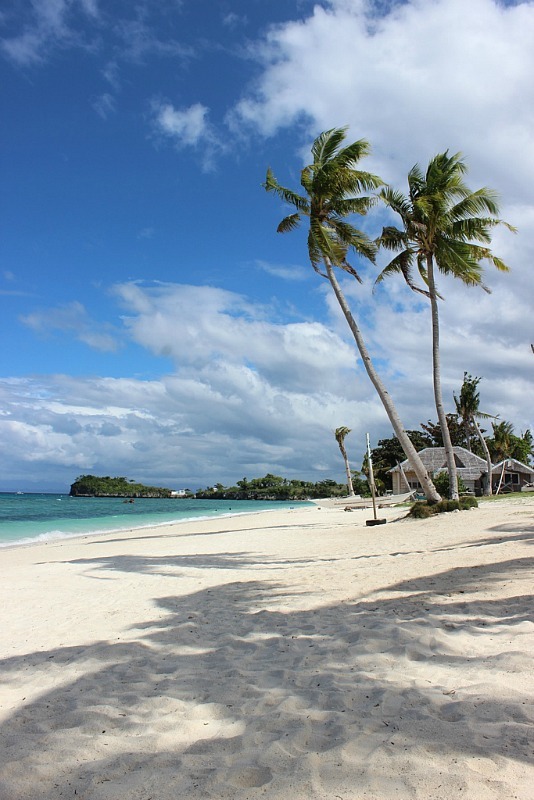 Now back to those issues of getting there. Everything was going well, with us catching our connections in a timely manner, and enjoying beautiful views along the coast of Cebu from the bus window. But then we got to the boat dock.

There was a sign at the dock stating that the one way journey over to Malapascua Island was 100PHP per person. We understood that we would need to wait until the boat filled up before leaving and there weren’t many people around.

After waiting a while the captain said we could leave right away with a half full boat if we all paid 200PHP each. We reluctantly agreed, not knowing how long the wait would end up being otherwise.

So we paid up…. and then we continued to wait. After about 20 minutes a whole bunch of locals got on, not paying anything. I don’t mind paying more as a tourist but we didn’t think it was fair that we paid double the going rate, the locals paid nothing, and we still had to wait despite being told we were going to be leaving immediately.

Tempers flared and it ended up turning into a heated argument, a Russian backpacker really going at the captain with the rest of us chipping in. But he refused to budge and wouldn’t give us back the extra money we paid.

He even tried to charge us more to take a small boat from where the larger boat had to anchor due to the shallow waters of low tide, but we steadfastly refused to pay any more and he ended up swallowing that cost at least.

It wasn’t a great start to our time on Malapascua Island.

The beach we landed on was a crescent of dirty sand crisscrossed by ropes, anchoring the many boats in the harbour to the shore.

The sun was beginning to set as we walked through a village bustling with people, sitting out the front of shops and houses, shooting the breeze.

Random chickens wandered freely while beautiful cocks were tied to poles by a string attached to their feet; prized possessions of their owners. Stray cats lounged against the sides of buildings, still warm from the sun. 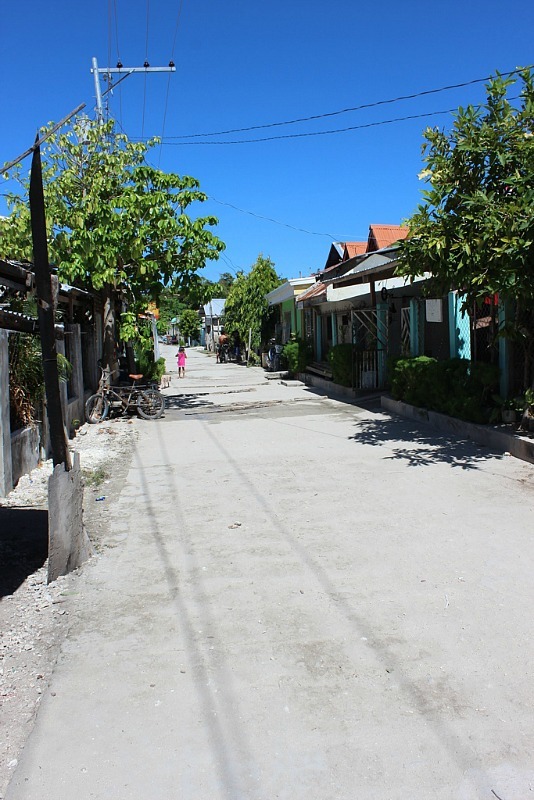 We quickly became lost in the sandy maze of pathways lined by simple houses and shopfronts. People stared as we passed. I felt somewhat uncomfortable and not very welcome.

With hope dwindling that we would find our guesthouse before sunset. We asked one of the locals for directions and were pointed where to go – only another 50 metres away.

Over the next few days we mainly based ourselves on Bounty Beach, the white sand tourist beach that stretches around the south east corner of Malapascua Island. It was an obligatory tropical beach paradise, you know, all turquoise water and powdery white sand. 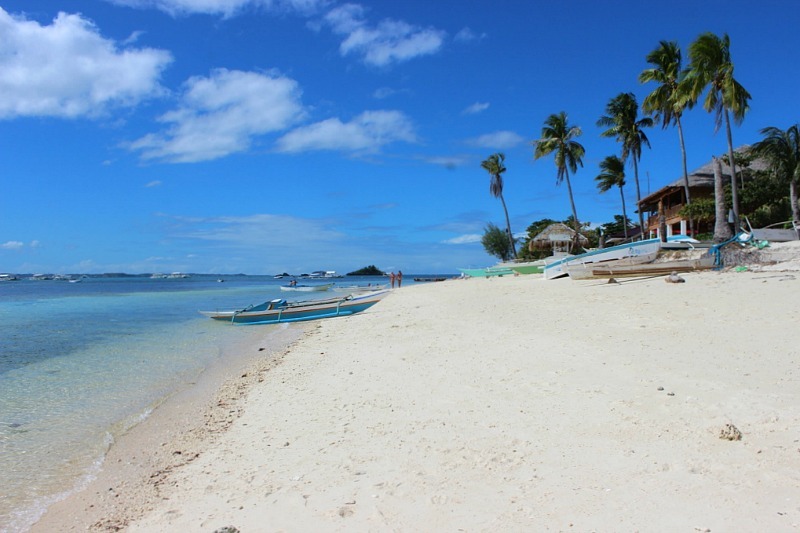 Beach restaurants and dive resorts lined the beach, a palm tree fringed, sandy pathway linking them. This was the tourist heart of the island and I was surprised how quiet and unassuming it was, especially compared to some of the Thai Islands. Tourism is a lot newer on Malapascua Island, and you could tell. 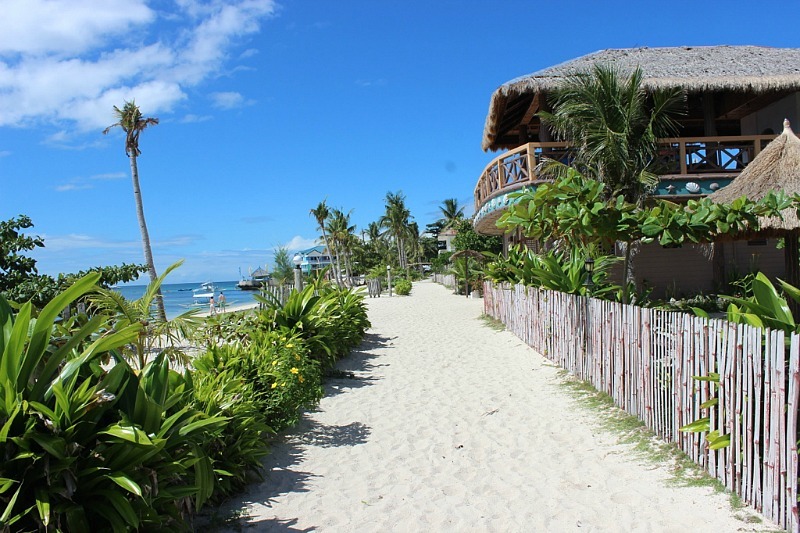 Between frequent showers we swam in the warm ocean and lay in the soft sand, warming ourselves in the sun. When it rained we hung out in the restaurant at our guesthouse or at one of the covered beach bars, looking out at our rain-drenched surroundings. We drunk cocktails on bean bags on the beach, watching a colourful sunset light up the sky.

Those cocktails and that sunset is one of my favourite memories from Malapascua Island; one of those perfect travel moments. 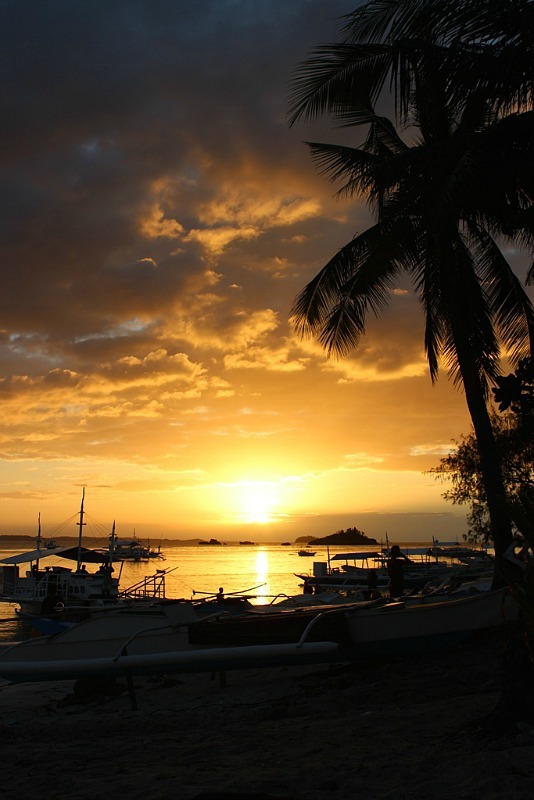 But we didn’t just beach lounge…

One sunny morning we decided to check out more of Malapascua Island by walking it length to length. After walking Bounty beach to its southern terminus, we cut through the village to the less-groomed local beach where the boats from Cebu land, and then we were northward bound.

Inland we encountered palm trees and fragrantly scented tropical flowers along a dirt path cushioned by long, swaying grasses. It was peaceful away from the busy village streets.

We passed a deserted rocky beach, bought sodas from a small shop to cool ourselves down, before entering a smaller, quieter village in the north of Malapascua Island.

Through the village to the coast we found a long, mostly deserted stretch of white sand beach with no restaurants or dive resorts in sight. Dark clouds out at sea edged closer as I soaked up the sun. After a quick dip it was time to go; the sky darkened further. 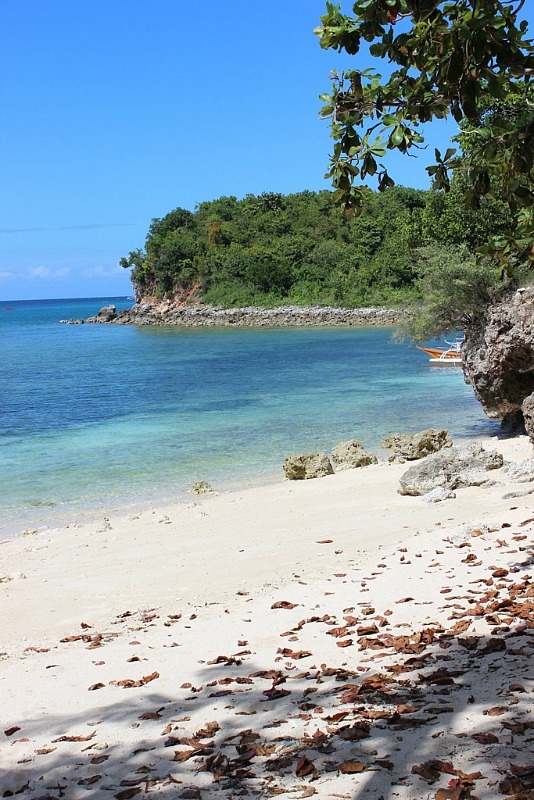 About fifteen minutes later the storm clouds reached us and a mighty deluge rained down. With nowhere to take shelter, we simply just kept walking. Within minutes we were soaked to the bone, water dripping off our foreheads and into our eyes.

The rain energised then exhausted me and the walk back seemed to take a lot longer than it had originally when the sun was still shining.

On the surface things our time on the island was going reasonably well, apart from the boat rip off and being rained on, but I felt a deep sense of unease during my time on Malapascua Island. A large part of that was the relationship issues we were dealing with.

After being apart for much of the previous six months, I felt disconnected from Trav. At night, I cried uncontrollably without really understanding why. I attacked Trav with cruel words for no reason. I wasn’t happy. I felt lost. I didn’t know how we would be able to make it work anymore, when the lives we truly wanted were so different. It would only be three weeks later that we broke up.

A scary return journey from our day trip to Kalanggaman Island also didn’t help. And then there was the murder playing in the back of my mind.

My memories from Malapascua Island are tinged with sadness. I remember the dark skies, and my dark mood. Being ripped off and rained on. Feeling helpless and lost. But I also remember the turquoise waters, powdery white sand and that one special sunset when I thought that everything would be OK.

Maybe my experience on Malapascua Island it was just a case of the right place at the wrong time. And the wrong person.

Have you been to Malapascua Island? What did you think? 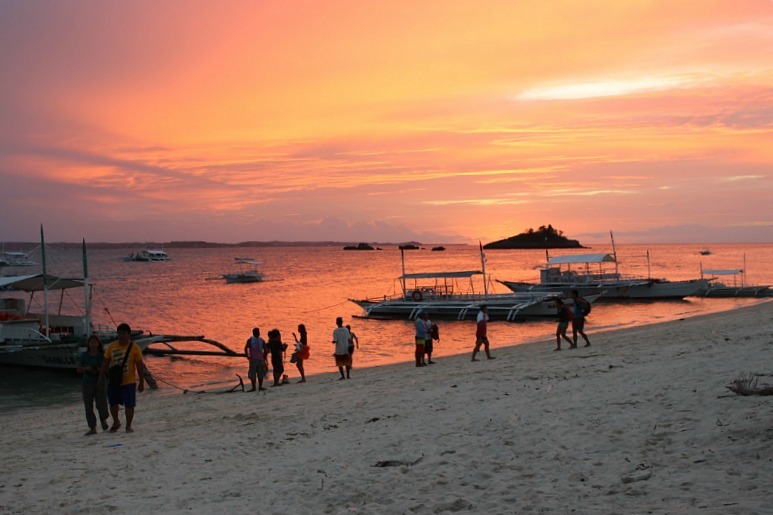