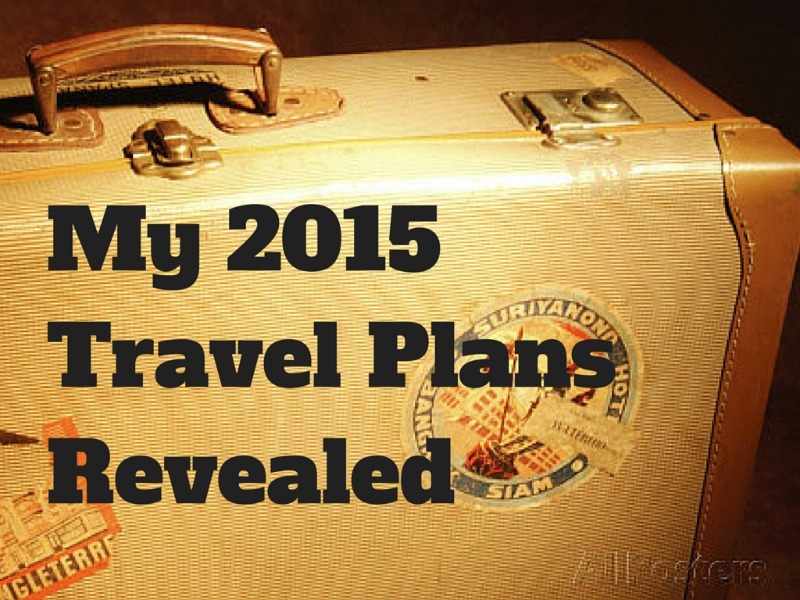 So my travel plans for next year aren’t exactly a secret. I have mentioned them on numerous occasions to friends and family and even a bit on my social media channels, but I haven’t laid it all out in one place as yet.

There is still a lot to confirm (i.e. EVERYTHING) but I have a pretty good idea about what the plan is now and I am well on track with my savings to pay for it all. I will be finishing my contract in mid-June and the epic travel plans will begin from there, but I also have a few smaller trips planned while I am still working which I am also very excited about.

The shorter travel plans are set in stone now as I have already booked the flights, but the big plans? Well, there has been a lot of brain storming but the plans are yet to make it into reality.

I will probably be starting to book my flights and some other travel arrangements early next year, but I want my longer term travel plans to be flexible as much as possible so I won’t be booking too much.

I will pretty much be travelling in the same style as my 13 month Americas trip, where we booked our first couple of flights and first few nights’ accommodation then left most of the rest of it to chance. I am keen to travel slower this time though, and stop off longer at places that I really like to recuperate.

So without further ado:

We will be ringing in the New Year in one of my favourite cities in the world, Cape Town! On the 2nd January we will be flying up to Pretoria to spend three nights at Trav’s brother’s place then we will be in Singapore for five days before getting back to Sydney, and back to work, after four weeks away.

At the end of the month we are taking a four day weekend and will be flying to Melbourne where we will have two nights and one day to explore, before driving and camping along the Great Ocean Road for three days with friends.

I have spent time in Melbourne before and have done all the touristy stuff that I wanted to do so this time will be about the amazing food and coffee, which Melbourne does so well. I will DEFINITELY be visiting the Cat Café also. How could I not?! As well as enjoying the fabulous summer weather in Manly, we will be heading to Adelaide and Kangaroo Island for another four day weekend.

I have heard such good things about Kangaroo Island and despite the ridiculously overpriced ferry to get there, I am excited for some camping, hiking and kangaroo chasing.

We will spend one night and a morning in Adelaide before flying back to Sydney, which is not nearly enough time but we hope to get a little taste of Radelaide, as the locals call it.

March should still be sunny and hot (hopefully) so I definitely want to have a weekend away in a cabin down the south coast of New South Wales at Jervis Bay. The beaches look incredible so my fingers are crossed that it will be hot swimming weather.

I would also like to get away to Royal National Park in March or April, as we weren’t able to go in November due to time constraints. I want to walk the two day coastal trail, staying a night in a back country camping ground on the beach. Hopefully Trav won’t fall off a cliff this time.

Over Easter we are visiting friends and their new baby in Cairns for five days. As well as a long overdue catch up, I am so excited to finally get out to the Great Barrier Reef, either snorkelling or diving.

With the current Government in Australia’s complete disregard for environmental issues coupled with the predicted effects of climate change on the reef, I want to see it while it still exists.

There are a few tropical islands off Cairns so I would like to get out to one of them as well while we are up there, as well as swimming in the Esplanade lagoon pool, exploring some of the northern beaches and maybe heading up to Port Douglas, a small resort town north of Cairns.

I would also love to make it up to Cape Tribulation and the Daintree Rainforest but I think I will save them for another trip.

We will likely go away for a weekend somewhere within a couple of hours drive from Sydney in May but I’m not sure where yet. I am interested in going to either Kangaroo Valley, Orange or Mudgee which should all have spectacular displays of Autumnal colour, something that I miss living in Sydney.

My last trip while still working in my current job, I will be heading back home to New Zealand for eight days at the beginning of June. It will be one year since I was back for my Grandmother’s funeral and I’m looking forward to spending some time at my Mum and Step Dad’s new house by the beach in Papamoa and seeing my Dad in Auckland, as well as friends between the two.

Hopefully I will squeeze visits in to Hamilton to see a good friend and her lovely family and up to Matakana to get my perfect Kiwi country town fix. There will also definitely be a visit to a thermal pool or two, my favourite Kiwi winter activity.

But I guess the biggest travel news that I have is that from mid-June, I am planning to take a year off to travel!

I am so freaken excited! (and scared and nervous)

There will be a couple of different trips making up my year off and the first one will involve three and a half months of solo travel through British Columbia, Alaska and Hawaii. It will be the longest solo trip I have ever done!

I’m not sure of the itinerary yet as it depends on volunteering opportunities through Help X, but the main objective of the trip is to make my way up through the Inside Passage from British Columbia in Canada and onward into Alaska.

This is the route that the cruise ships take and I love the idea of doing it by ferry. I have a few ideas in mind of what else I would like to do on this trip which include:

I am really hoping to partner up with some fantastic tour companies and accommodation providers along the way, preferably eco conscious businesses.

There are some incredible lodges and some quirky HI Hostels that I would love to stay at so I will begin contacting them in the New Year. Wish me luck! Sometime at the beginning of October I will be back to see my fiancé in Sydney as I am sure I will be missing him a lot by then! I am planning on being back for about a month and I am hoping to pick up a bit of temping during that time, to help with funds for part two of my epic adventure.

If there is nothing available then I will enjoy all of the free activities Sydney has to offer including hiking in native bushland and along spectacular coastlines, visiting the many eclectic markets and doing a bit of urban exploration.

I will probably need some downtime too so there will be a lot of catching up on TV programs and just chilling out with Trav and friends.

At the beginning of November I will be continuing with my travels by spending about two weeks in New Zealand, mainly in the South Island.

I have been dying to visit Wanaka in summer since I was first there in winter 2009, so I will definitely be visiting the cute alpine town on this trip as well as doing one of the Great Walks; it’s a toss-up at the moment between the Routeburn track and the Kepler track.

I also hope to revisit Queenstown and spend a few days in the Catlins if there is time.

From New Zealand I will be heading to Asia to finally explore this exotic continent. Other than a 30 hour stopover in South Korea and an upcoming 5 day trip to Singapore, I haven’t dipped my toes into the wonders of Asia so I am so excited to finally be travelling there.

The plan is to spend between 7-8 months in total, travelling in South East Asia, India, Nepal and Sri Lanka. I will most likely start in Chiang Mai, Thailand, hopefully in time for the free Yi Peng Lantern Festival, although dates aren’t released until closer to the time. I will hopefully be travelling with one of my closest friends most of the time in Asia but there may be a bit of solo travel involved as well.

Another close friend is going to join us in India for a month and Trav will be meeting me along the way in the Philippines and Sri Lanka for a couple of weeks at a time.

I’m not too sure of the order I will be visiting each country and how long I will end up staying as I want to leave it up to chance, but the countries I would like to visit at this stage are:

This really is just a rough outline as I can’t help myself planning just a little bit, but nothing will be set in stone. One of the good things about living in Australia is that if I decide to stay longer in a country and skip others that I had planned to visit, then I can easily go back another time.

The countries that I am most looking forward to going to are Thailand, Philippines, India and Sri Lanka so as long as I get to them over the 7-8 months, I am happy.

God knows some of these plans will change along the way, especially the longer term ones, but that is all part of the fun.

I’m nothing if not indecisive.

What are your travel plans for next year? Are we going to cross paths at all? I would love to meet up with any fellow bloggers or readers along the way!

61 Comments on My 2015 Travel Plans REVEALED