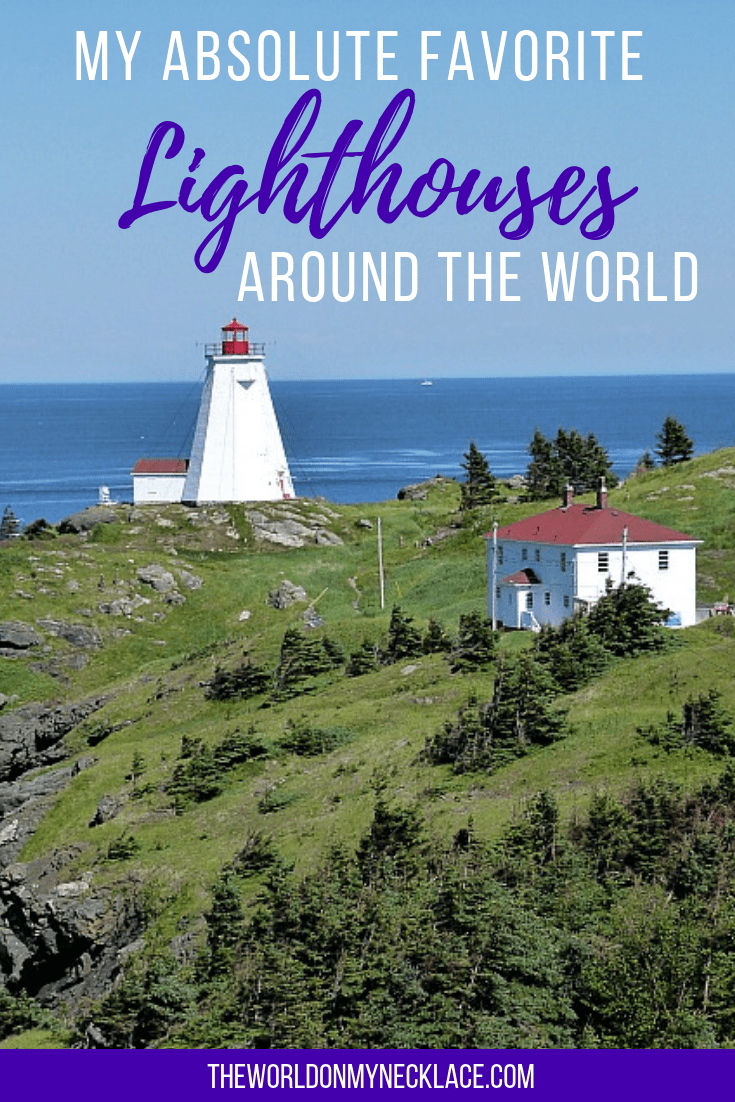 I don’t know what it is about lighthouses that make them so intriguing and beautiful to me. It could be that there weren’t any where I grew up – well only boring small ones that don’t even look like lighthouses.

Or maybe it’s just because they look cool. Maybe I was a lighthouse keeper in a past life. I don’t know why, but I like them a lot.

Because of my love for them, understandably I tend to gravitate towards them when travelling and I have now visited an impressive amount over the past 14 years of travel.

The best lighthouses to me have a cool history, a great location and they look the part. Tall and conical with red and white colouring are my favourites.

There are still so many more I would like to visit but so far, these are my favourites – what I think are the best lighthouses around the world.

The Best Lighthouses Around the World

Built in the late 18th century and added on to over the years, the iconic Portland Head Light is a striking sight with its long white body and black hat, perched on rocks above the crashing waves.

A small and interesting museum in the red-roofed former lighthouse keeper’s quarters is definitely worth a visit for the excellent interpretive displays and to learn about the past lighthouse keepers and their families.

Entry is only $2 and there is also a small gift shop. We topped off our time there with a visit to the nearby Lobster Pound at Two Lights for a Maine specialty: Lobster dinner with Blueberry pie for dessert. 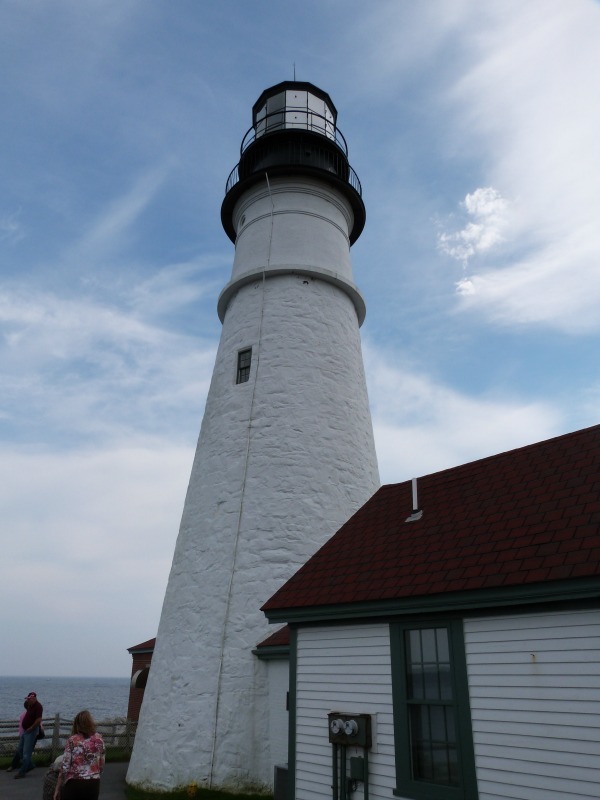 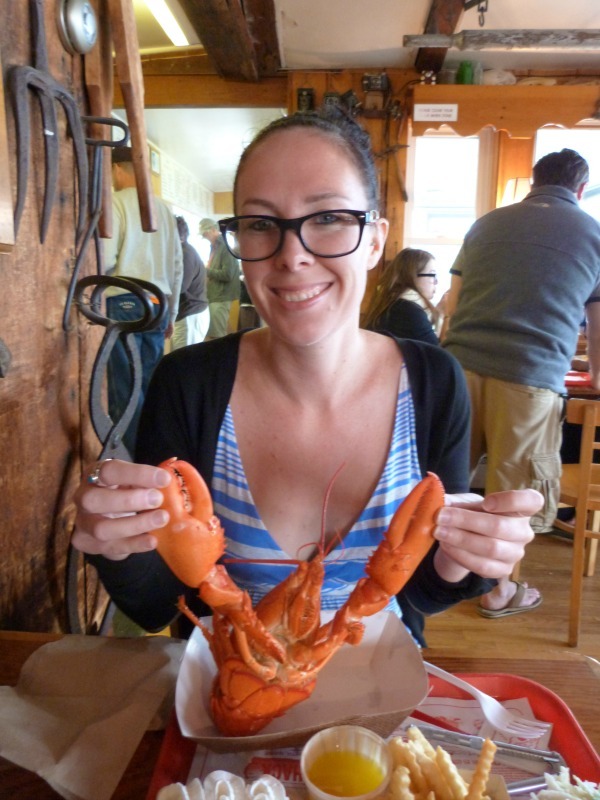 I have passed this red and white striped lighthouse daily on the ferry to work since I moved to Manly in August 2014. Standing guard over the harbour entrance, it looks like a candy cane sticking out of the cliffs.

A 40 minute return hike will take you from the seaside suburb of Watson’s Bay to this attractive lighthouse with stunning views over the Sydney coastline and over to my home, Manly.

Still used today, sometimes the only thing I can see when I am taking the ferry on a moonless night is the lighthouse beacon flashing, alerting me to the fact we are about to cross over the rocky waters at the harbour mouth. 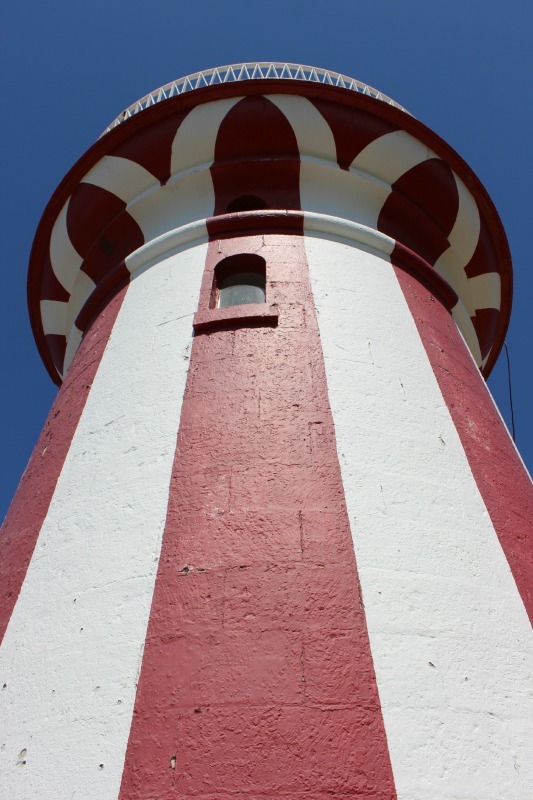 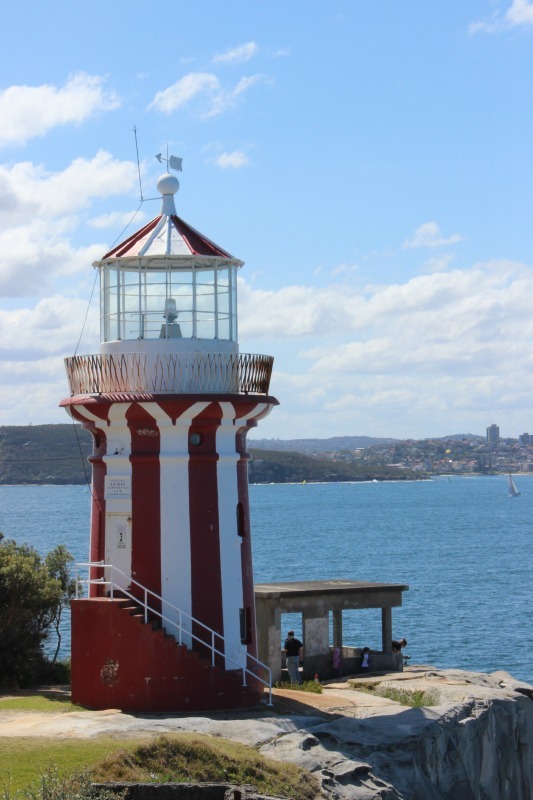 Possibly the most famous lighthouse in New Zealand, this squat white lighthouse commands an awe-inspiring position on a wild coastline at the northern tip of New Zealand. Built in 1941 to replace another lighthouse that was located on a treacherous island offshore, the Cape Reinga Lighthouse has not been manned since 1987.

It would be pretty hard to see the lighthouse without any tourists and when we visited in early January, there were busloads of people. The crowds really didn’t distract from the beauty of the area and the lonely lighthouse sitting at the end of long cliff, protruding out into the sea.

We hiked a short trail down to a rocky black sand beach for more spectacular views of the impossibly coloured coastline and managed to escape the crowds quite easily. 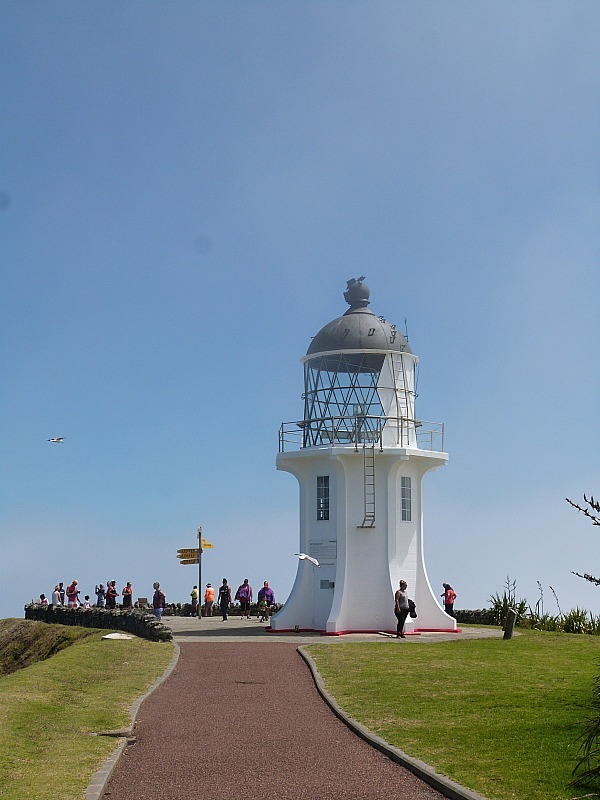 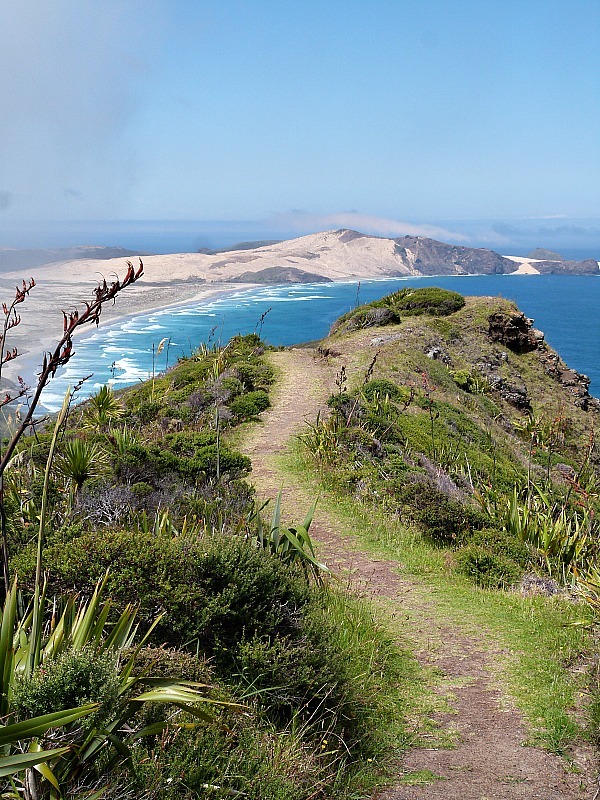 Peggy’s Cove Lighthouse is one of the most photographed lighthouses in Canada, and it’s not hard to see why. One of the most beautiful lighthouses I have visited, it is the classic red and white colour combo with little windows up the side of its octagonal body.

There was a low fog pervading the area when we were there and it gave the lighthouse a mystical quality. Sitting upon smooth granite rock, it is a treacherous place in big surf with many people slipping off the rocks and into the freezing cold water, some to their deaths.

The quaint fishing village of the same name is a great spot to explore with weather-worn lobster boats bobbing in the small harbour and piles of fishing nets and lobster pots everywhere. 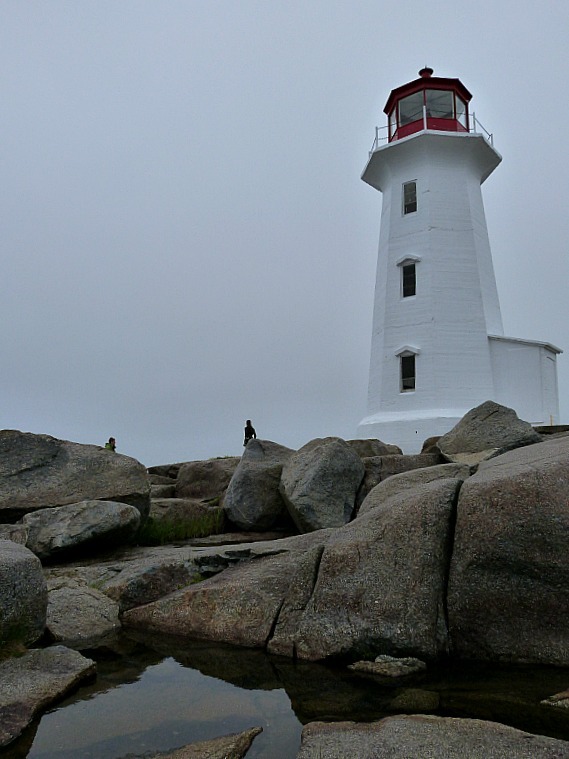 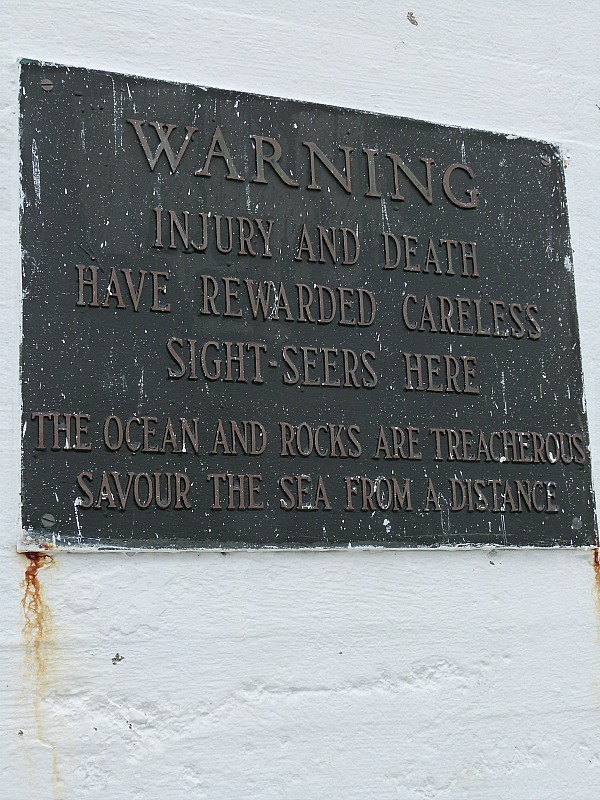 Another beautiful red and white lighthouse, Heceta Head Lighthouse looks out over a rocky cove and is surrounded by dense green forest. Built in 1894, this historical lighthouse has recently been restored and has the strongest light on the Oregon Coast. A Bed and Breakfast operates out of the former Assistant Lighthouse Keeper’s house nearby.

It is particularly striking on a misty day, which are common on the Oregon Coast. It definitely has one of the most picturesque settings for a lighthouse that I have seen.

There is an interesting Interpretive Centre with old photos and belongings from past lighthouse keepers on the ground floor of the Keeper’s house and we were able to enter the lighthouse itself on a tour. 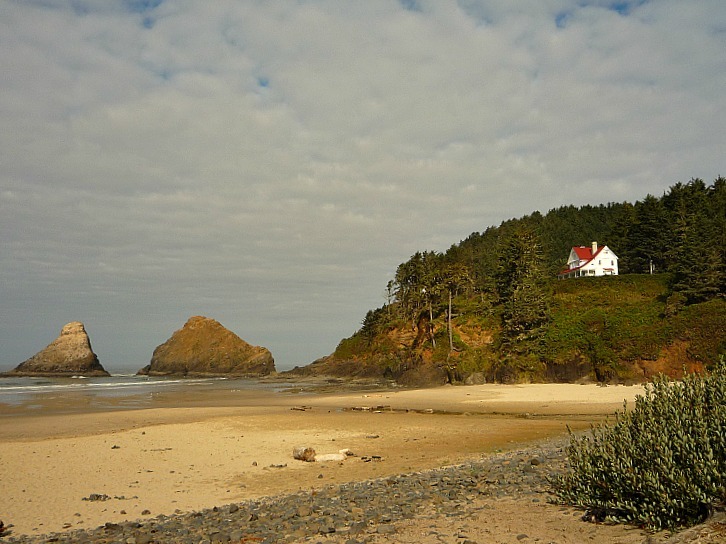 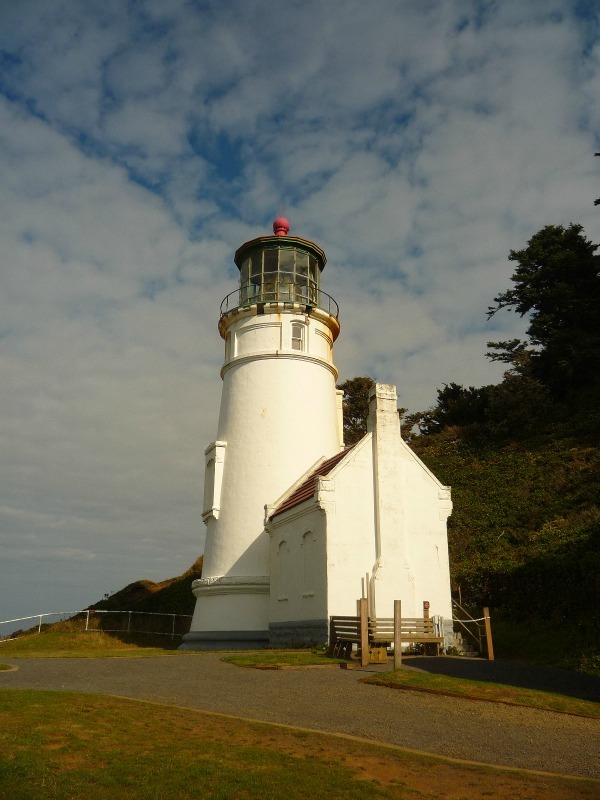 This squat white and black lighthouse with attached cottage stands among the trees right on a cliff edge in Maine’s gorgeous Acadia National Park. You aren’t allowed to enter the vicinity of the lighthouse as it is the private residence of a local coastguard member and is family.

For the best view, there is a short walk down to the rocks where you are then looking back up at the lighthouse and along the coastline. Like everywhere in Acadia National Park, the setting is beautiful. 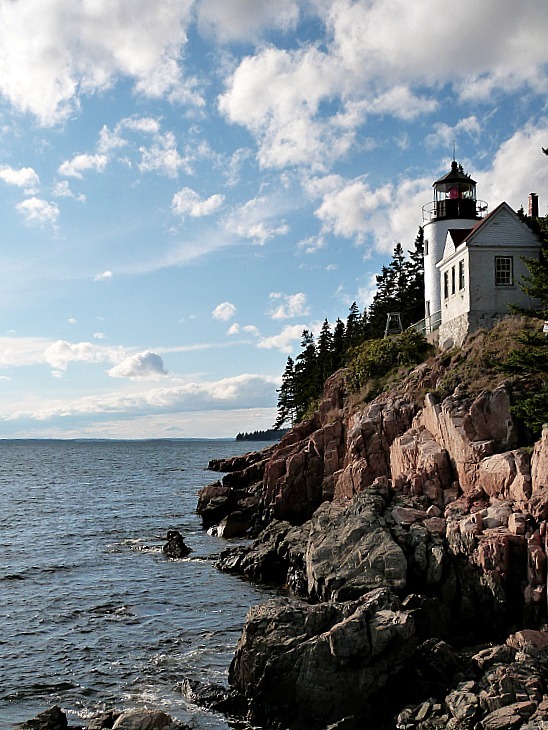 I loved how tall and skinny this lighthouse was, quite different to the shorter fatter ones I have usually seen. It is one of the only remaining lighthouses in the world to be manned by a lighthouse keeper.

We didn’t realise you could actually pay to climb to the top of the lighthouse which is meant to have spectacular views, but it was pretty impressive just seeing it from afar like we did.

There is a lovely waterside path you can walk from the lighthouse to the small seaside town of Kommetjie, which ended up being one of my favourite Cape Town villages. 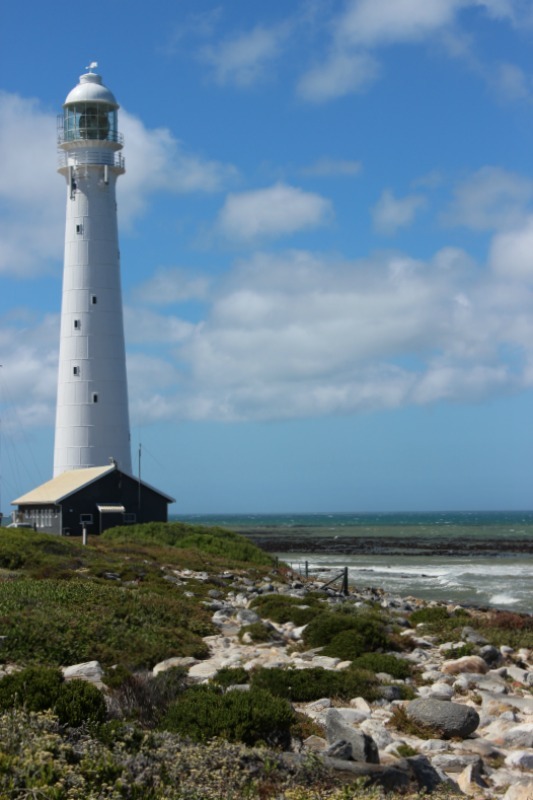 It was a small and simple hut with no bathroom and limited kitchen facilities but we loved it. The best part was sipping red wine under the lighthouse while we watched the sky turn a brilliant pink when the sun set, then as soon as it got dark, watching the beacon switch on automatically.

It is a spectacular spot overlooking the ocean at the end of Australia. 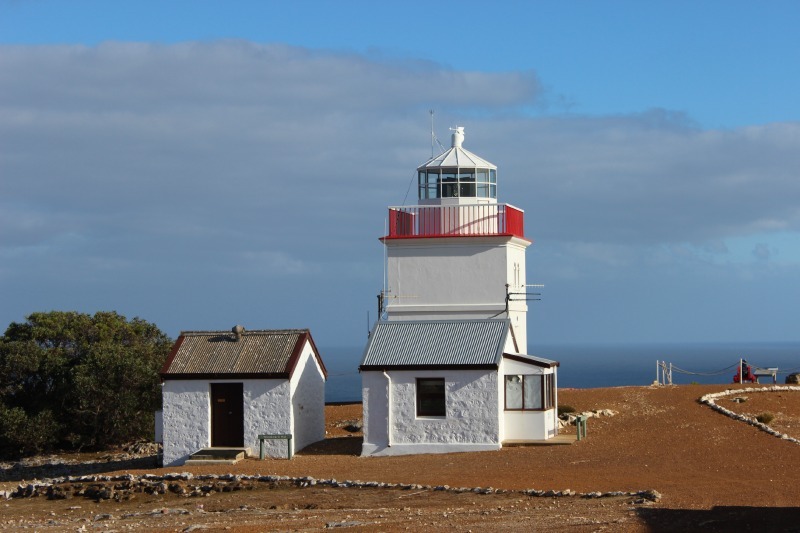 Another amazing lighthouse and the tallest in Oregon, Yaquina Head Light sits at the end of a headland that juts out into the ocean. The lighthouse was made in Paris and shipped to Oregon in 1868 where it has been guarding the rocky coastline ever since.

I walked the spiral staircase to the top where there were fantastic views from beside the massive lens, which was so much bigger than I thought it would be close up.

You may recognise this lighthouse from its appearance in the horror movie ‘The Ring’. That movie terrified me so I am pleased I didn’t know that when I visited! A short walk will take you to a sheltered cove with tidal pools and great views back to the lighthouse. 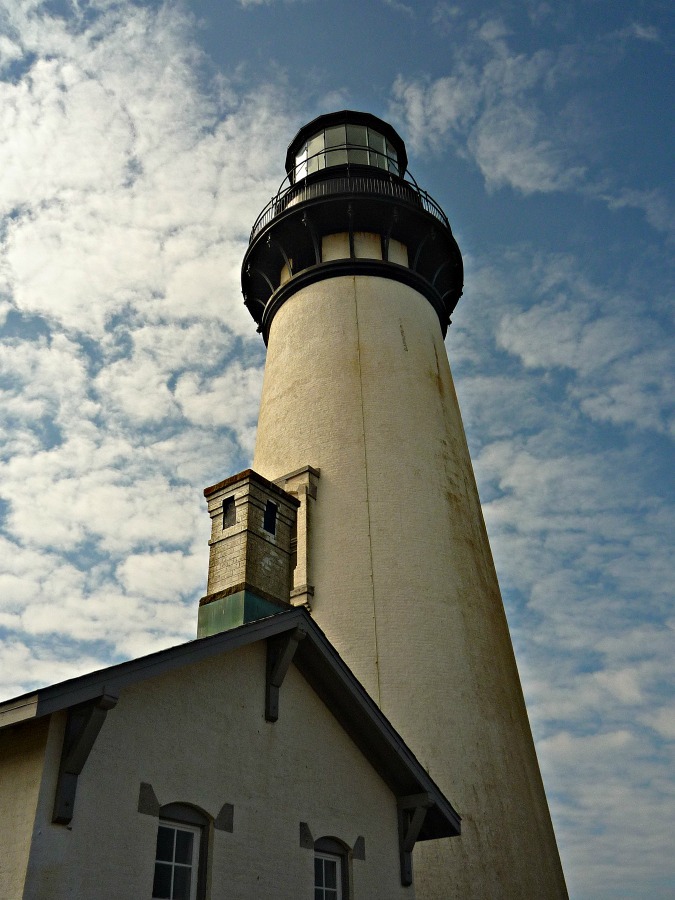 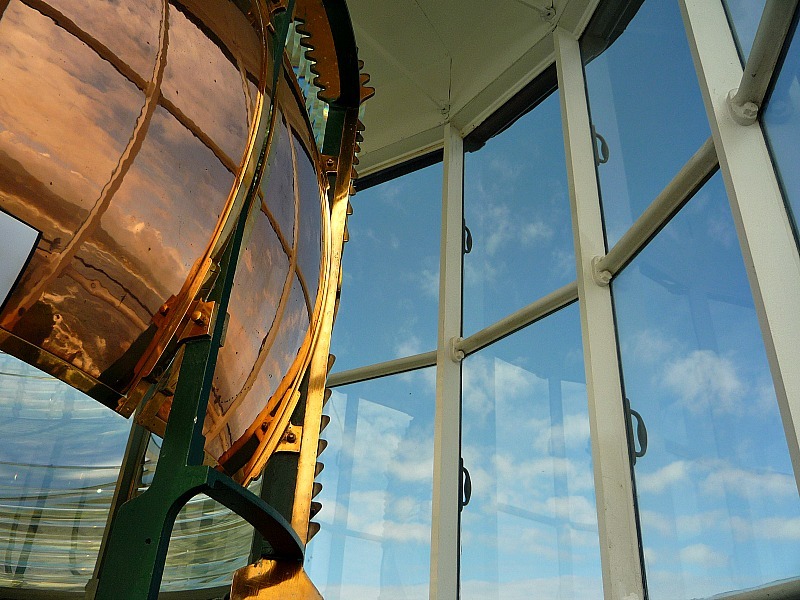 I only visited this lovely lighthouse for the first time last weekend, despite it only being about 20km from my home in Manly. It is a 40 minute return walk up to the lighthouse and is more than worth the hike for the sweeping views over Palm Beach and the Pittwater.

It was built with local sandstone in 1881, which makes it fairly old for this part of the world. The grave of the first lighthouse keeper George Mulhall is nearby and states that he died from being struck by lightning. 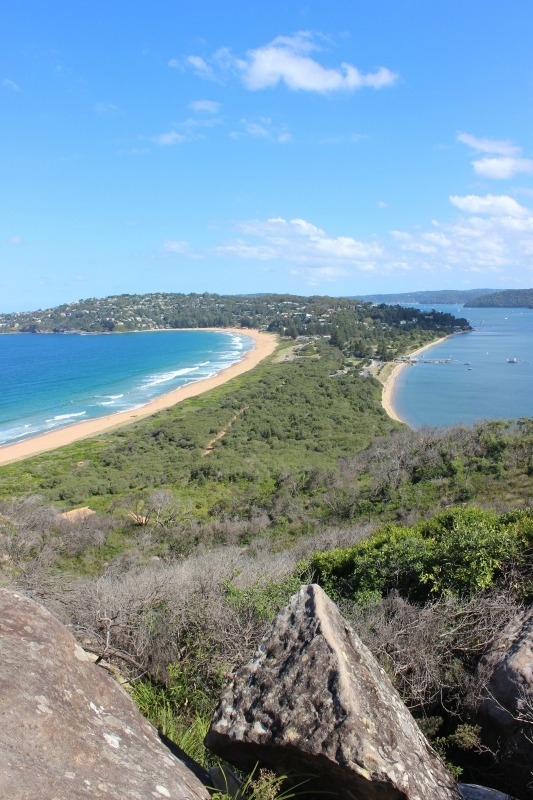 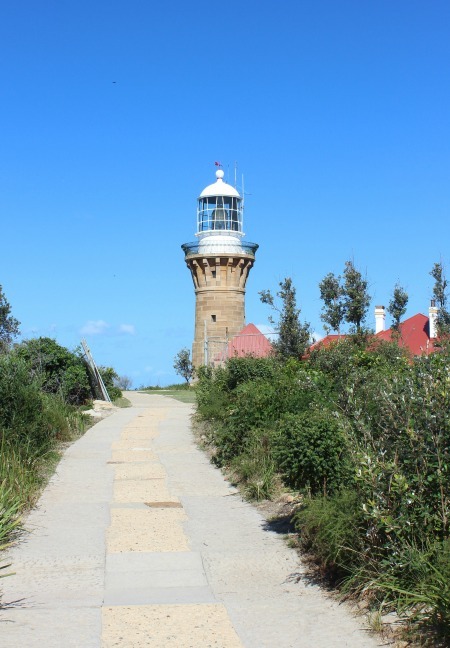 Although you can’t access the lighthouse itself there is a beautiful park (aptly named Lighthouse Park) surrounding it where there are hiking trails through pristine coastal rainforest and a couple of rocky beaches with views over to the city.

This lighthouse casts a solitary figure on a mound of granite boulders fronting Burrard Inlet. It is best seen from the water which I was lucky enough to do when we rented a small boat and cruised around the harbour last time I was in Vancouver. 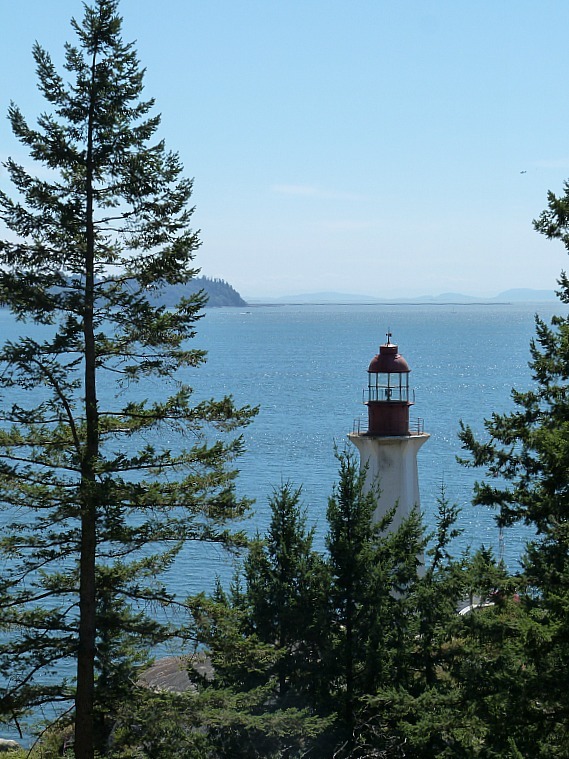 The Big Tub Lighthouse on Canada’s Bruce Peninsula is special because it was the first one I have visited that looks out onto a lake, rather than the ocean. Not that it looks like a lake.

The swimming pool waters of Georgian Bay, part of Lake Huron, would look more at home in the Caribbean rather than a lake in Canada. A white weatherboard lighthouse with jaunty red framed windows, it is definitely one of the more photogenic lighthouses I have visited. 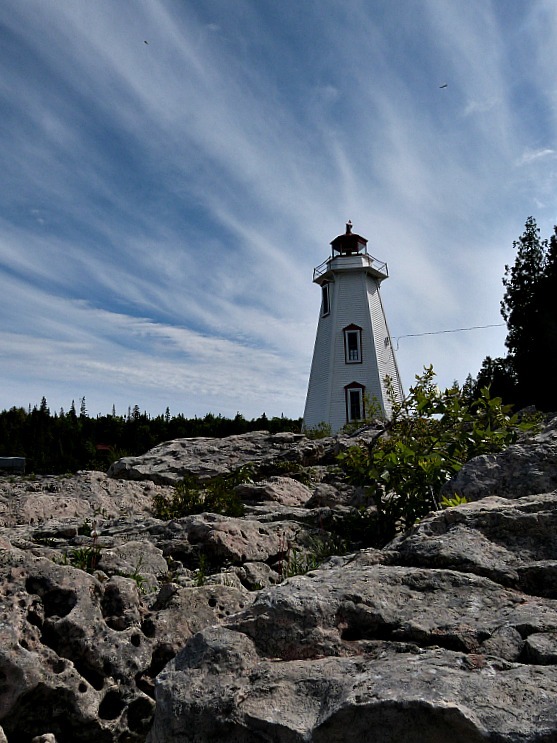 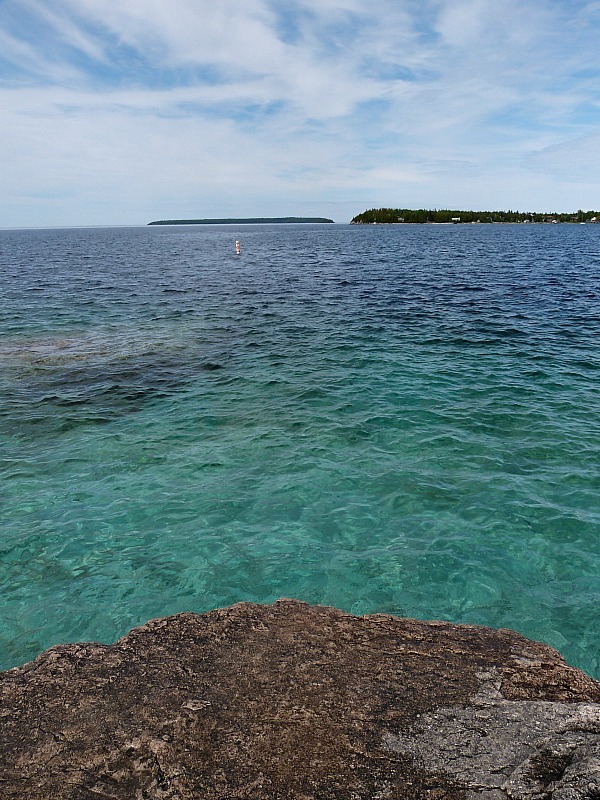 Located on a teeny tiny island off another tiny island, off a big Island off the coast of British Columbia, Chrome Island Lighthouse is pretty remote! The lighthouse is actually manned by a couple who file weather reports every three hours and collect scientific data.

I can’t imagine what life must be like on a rock that is less than two acres in size. The best place to view Chrome Island and its lighthouse is from Boyle Point Provincial Park on Denman Island.

Another lighthouse where I wasn’t super impressed by the lighthouse itself, but more for the history of the area and the commanding views over the turbulent Atlantic Ocean.

The legend of the Flying Dutchman, a ghost ship that when seen is said to be a bad omen, is from the rough waters surrounding the Cape Point lighthouse. I loved the small Museum that told tales of the Dutchman and the many ships that sunk trying to round the Cape over the years.

The short hike up to the lighthouse was congested but offered brilliant views from all points. I also loved the hike below the lighthouse to a second smaller light at the end of a narrow promontory. 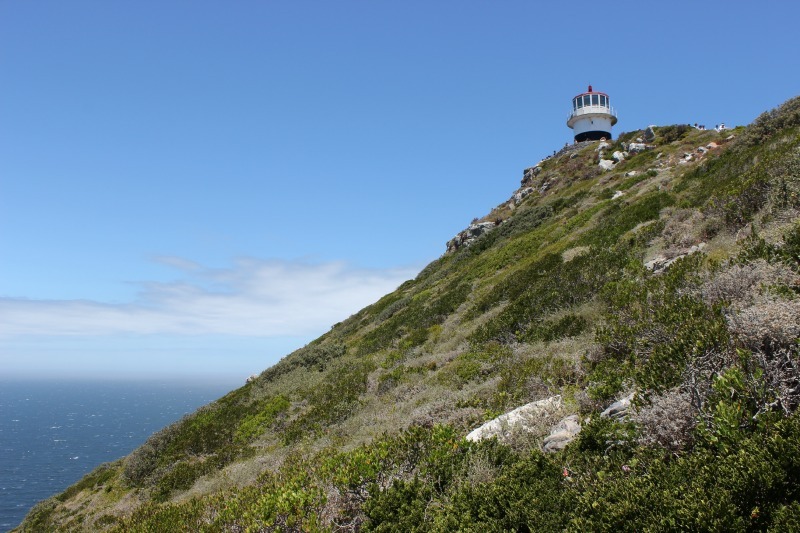 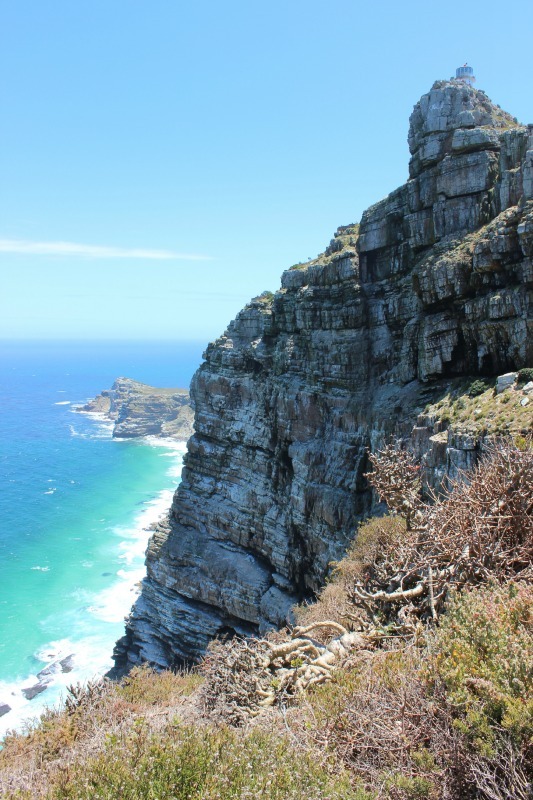 I saved the best till last. My absolute favourite lighthouse in the whole wide world, the gorgeous Swallowtail Lighthouse on Grand Manan Island has everything that makes a lighthouse great. Incredible views, good looks, remote access, and not many people. It even has an awesome name.

Swallowtail Lighthouse is located on a windswept peninsula that looks out upon lobster boats and whales and sits among lush green grass.

We could see the lighthouse from our prime camping spot on the edge of a cliff nearby where we experienced hands down the best sunset we have ever seen. You can’t enter the lighthouse but you can wander around the grounds which we did one sunny afternoon in early summer.

It was a highlight of my five months in Canada. 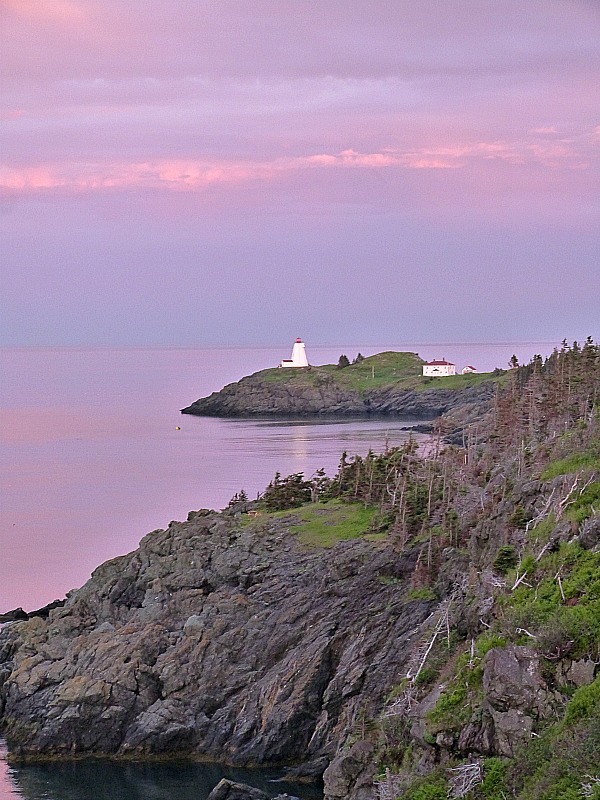 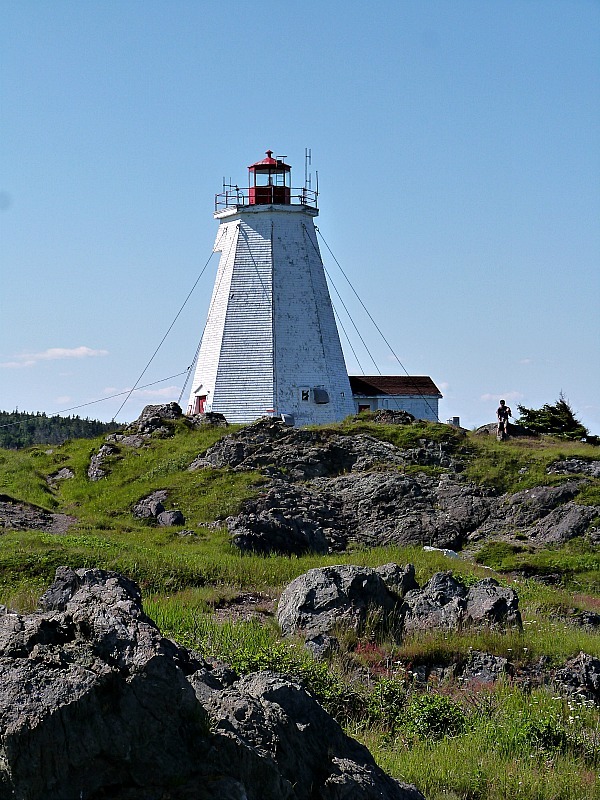 If you liked this post, check out some of my other favorites posts:

28 Comments on The Best Lighthouses Around the World