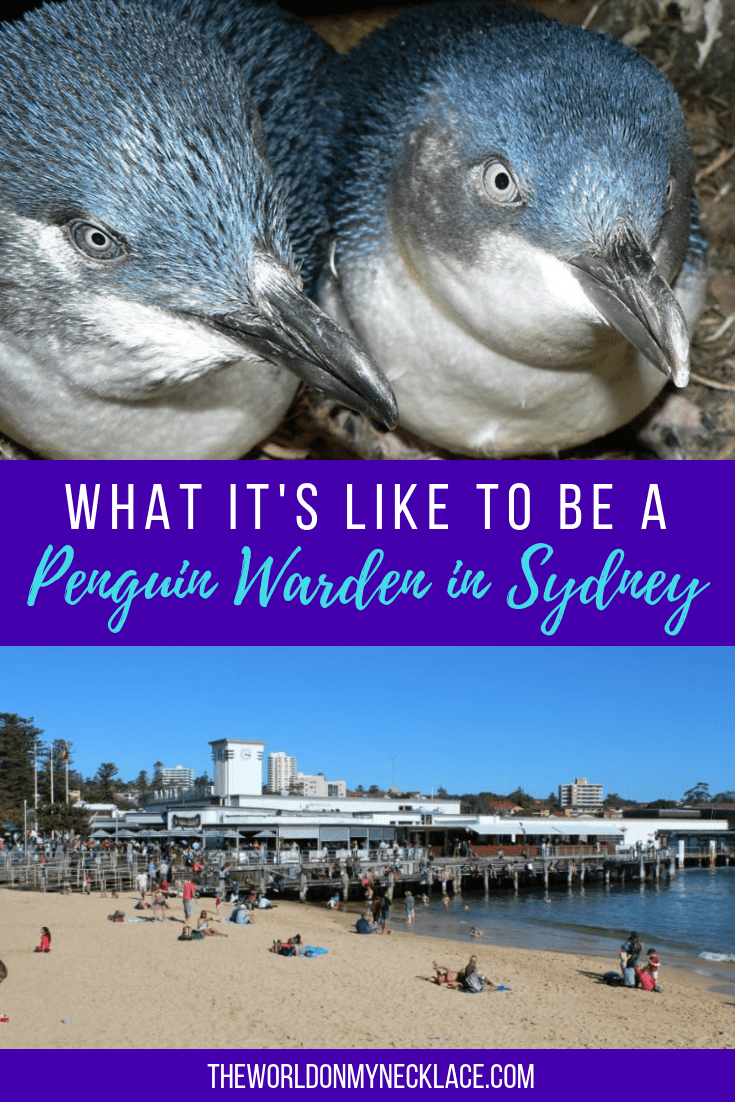 If you are curious about working with penguins or want to visit the Little Penguins at Manly in Sydney, then read on…

I have had some fairly unusual jobs in my life so far.

I have been a Receptionist at a haunted hotel and at an indoor paintball studio. I have been a game day waitress in the Director’s Lounge at Chelsea Football Club, serving celebrities. I have gone business to business selling credit card machine paper rolls. I staffed and did HR for a Halloween event that saw me wearing a spooky costume for a whole month.

I have bartended on a boat, worked at a Yacht Club, and nannied for a wealthy family in London. I was briefly a ring model at a jewelry auction.

But my volunteer job where I looked after penguins may just take the cake. I worked as a Penguin Warden in Manly. This basically means I babysit penguins.

I found out about this amazing volunteer position through friends that used to live in Manly and were wardens themselves. It is just for one shift per week and each shift is generally only a couple of hours, so it was easy to fit in with my regular job.

I started working Saturday nights and then switched to Sundays, which suited me better timing wise and they were generally quieter. 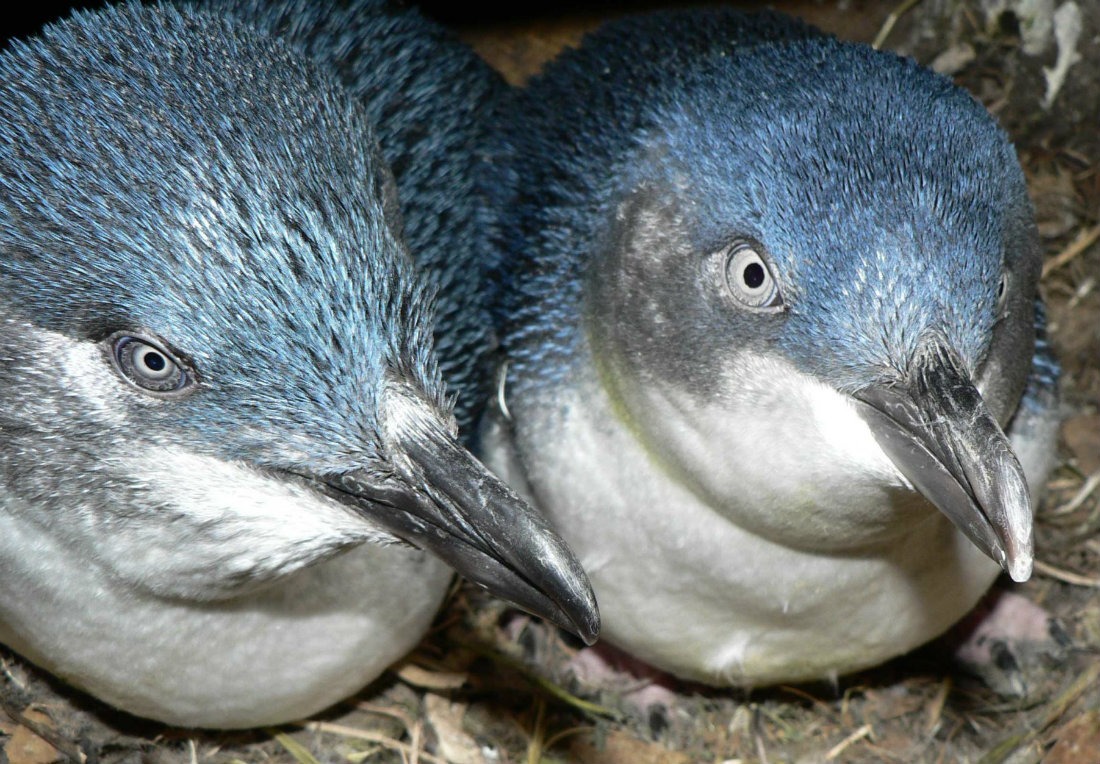 Manly’s Little Penguins, also known as Fairy or Blue Penguins, are the only mainland breeding colony left in New South Wales. They are the world’s smallest penguins at only 30cm tall, weighing on average 1kg.

They are also the nosiest and most vocal species of penguin and communicate using a range of different calls and songs, some of which are quite beautiful.

There are approximately 23 pairs that nest in the National Park’s Spring Cove which has special ‘Critical Habitat’ protection, but they don’t need protection from dogs and people there as they aren’t generally seen when they come ashore each night because the beach is secluded, and their nests are hidden between the rocks.

The penguins at Manly that do need protecting are the small colony that lives under Manly Wharf, right by where the ferry docks and where there is a lot of foot traffic. There was only one couple living under Manly Wharf when I was a Penguin Warden in the 2014/2015 breeding season, Lucky and Bella.

There used to be a lot more, but each year penguins in this built-up area are being killed primarily by dogs and speed boats as well as suffering other casualties. The Penguin Warden Volunteer Program which is operated by the National Parks and Wildlife Service, was originally started in 2005, following the destruction of nests and eggs on a couple of beaches as well as predation of penguins by dogs.

Angelika Treichler, our head warden at the time, was documenting and watching over the penguins long before that.

Angelika was the catalyst for this program and without her intervention and passion for these gorgeous little birds, there would probably be none left in Manly at all.

The main objectives of the Penguin Wardens are to educate the community and to protect the penguins at Manly, so that they can breed safely without interference from humans or dogs.

Once baby penguins grow their waterproof outer layer of feathers, they leave their home for three years, which is spent out at sea. Males start returning to breed in the place where they were born after three years, bringing a partner with them.

During the breeding season that generally runs from June to February, Little Penguins leave their nests at dawn and spend the day fishing out at sea, only coming back within an hour or two of dusk to return to their nests and sleep for the night.

So there is only a small window when the wardens need to watch over them, usually about two hours per day, but if the penguins decide they don’t want to go to bed, then it can turn out to be a lot later.

Generally, Little Penguins mate for life but if one of them dies prematurely, the other will look for another partner.

These birds really are special and they have such distinct personalities. They are a joy to watch.

I love watching them land, so clumsy yet graceful in their way. They waddle like ducks and just look so comical and cute. Lucky and Bella mated in front of us a few times and danced around each other singing and flapping their tiny flippers.

Usually, they would stay under the wharf and just poke their heads out to see what’s happening out on the beach and to get some fresh air, but sometimes they ventured further, especially Lucky.

Lucky has paraded up and down the ramp right below a crowd of people, without a care in the world. One evening he started jumping up the stairs to where we were sitting and watching him, before turning back. They were always doing something amusing. Probably the most exciting thing I saw was when Bella was captured because she was seen hobbling. It took a couple of hours but Silke Stuckenbrock from Australian Seabird Rescue finally got her.

She wasn’t happy about being captured and was squeaking and pecking at Silke’s hands. She had a deep cut on the top of her foot so she was taken to the vet at Taronga Zoo for treatment. She was rehabilitated there and was released once she gained a bit of weight and her cut had healed.

As well as just watching the penguins and laughing at their antics, there are set duties that a Penguin Warden completes each shift. At the beginning of each shift, the gates to the stairs leading down to the beach are locked and signs are put out on the beach letting people know that it is a penguin breeding area and that they cannot enter that section of the beach.

During each shift, wardens ensure that people do not enter that area and that any dog owners walking nearby have their dogs on a leash. They also ensure that no one uses flash photography when taking pictures of the penguins as the harsh light disturbs them.

The Penguin Wardens receive formal training from the National Parks and Wildlife Service every May but as I started in September, I was trained on the job by Angelika herself.

Once training is complete, wardens get snazzy Patagonia jackets with the National Parks and Wildlife Service logos on the back as well as a small Penguin Warden logo on the front. Another big part of the job is answering any questions that the public has about the penguins and we generally got asked a lot! Educating locals and visitors is important as we need all the support we can get.

Most evenings that I worked there was at least one local that didn’t even know there were penguins living at Manly.

You really do see the best of people and worst of people doing this job. There are the curious, supportive, lovely people that give you hope that these penguins can be saved. I loved being asked questions about the penguins and informing people of their plight.

There are a lot of locals that feel lucky to have this colony in Manly and are incredibly supportive of the work of the wardens. There was even a local filmmaker that made a film about the Little Penguins of Manly to raise awareness and he did it completely for free, just because he wanted to help the cause.

You can catch some of Paul’s work here, filmed during Bella’s rescue.

The other volunteers that I worked with were all wonderful people who went above and beyond for the penguins. I worked with a few different people over Saturday and Sunday evenings and I got the chance to meet some of the other wardens at a Penguin picnic where we met up for homemade goodies and a bit of socializing. And then there is the worst kind of people. The people that get aggressive because you have kindly asked them not to climb the fence into the penguin breeding area, or to walk on the small section of the beach that is closed.

There are people who will push over an older lady and kick sand on her because she asked them to put their dog on a leash. Seriously, this happened.

There are the people that will let their dogs roam around unattended, which is what likely happened when the colony of penguins that used to live at Federation Point were killed by a dog a couple of years ago. There are people who think it’s funny to smash penguins’ eggs and put cigarette butts into the broken shells. Bad people.

These penguins will always need our help because of the people like that and I am proud that I was able to do that when I lived in Manly.

Have you seen Little Penguins before? Have you ever volunteered?

33 Comments on What It’s Like To Look After the Little Penguins at Manly, Sydney