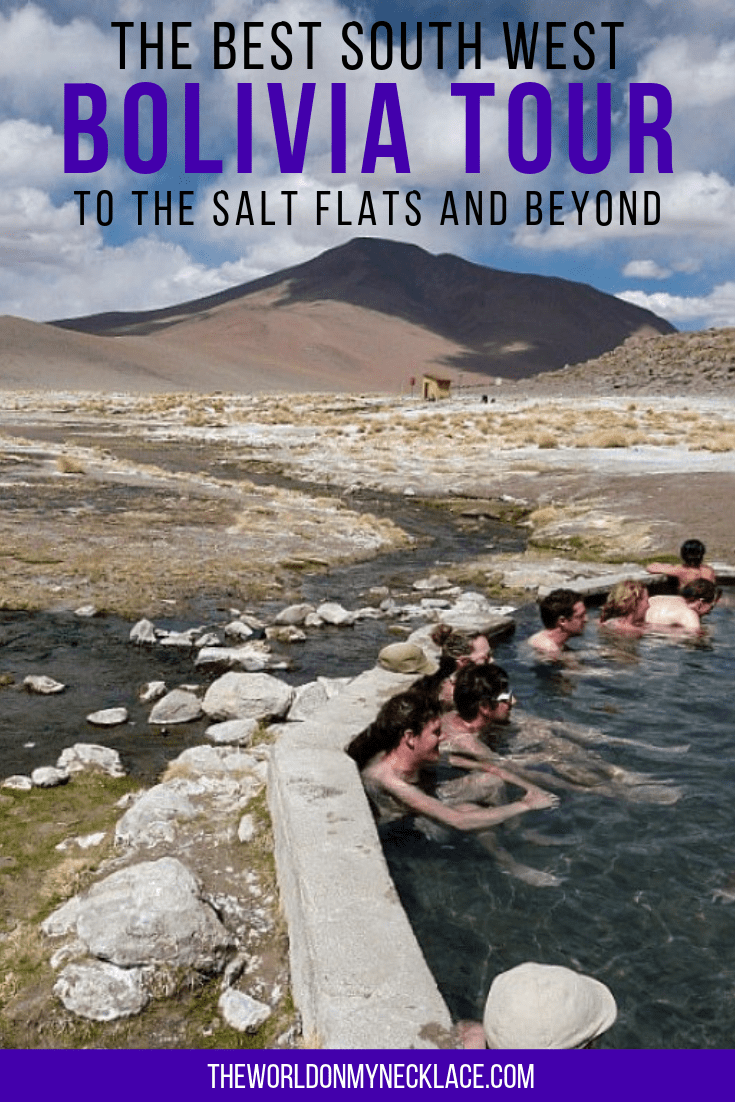 It’s expensive, it’s freezing and the days are long, but despite all of this, our tour to the remote South West corner of Bolivia was spectacular.

The tour began with us meeting our tour guide and cook and the other two people in our group at the Tour Office, then we set out in our jeep, past rock formations and canyons, and up into the mountains.

Day One of our South West Bolivia Tour

We rose up quickly to an altitude of about 4000m, stopping along the way for some scenic views. We had thought the landscape around Tupiza was amazing but things just got better. 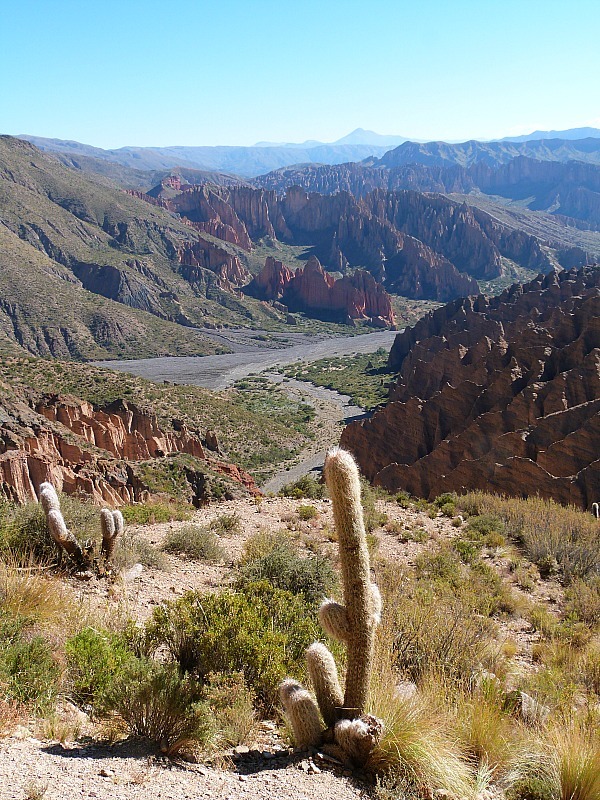 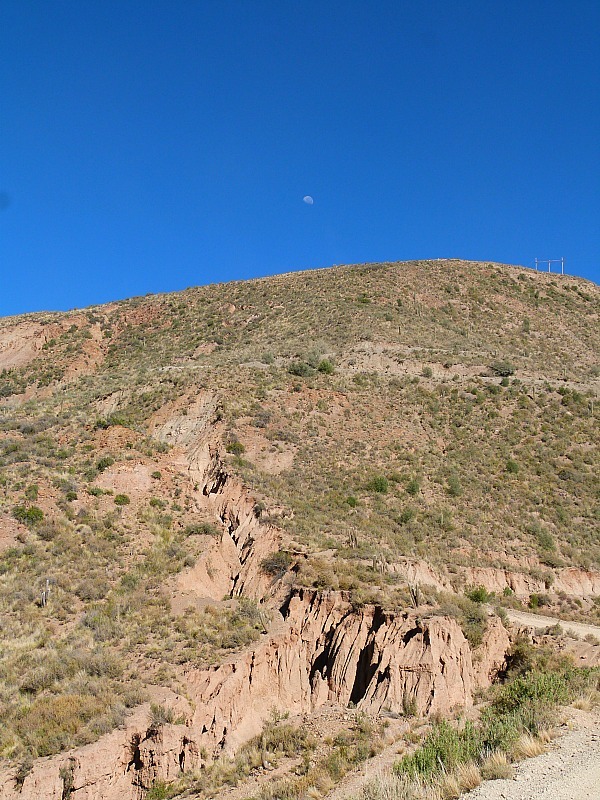 The mountains plateaued and we drove through grassy fields full of llamas and alpacas. We got to visit them in the fields, although they wouldn’t let us get to close.

All of the older Llamas have earrings made of red ribbons, not sure why this is done but it is cute and makes me think of young girls with pigtails. 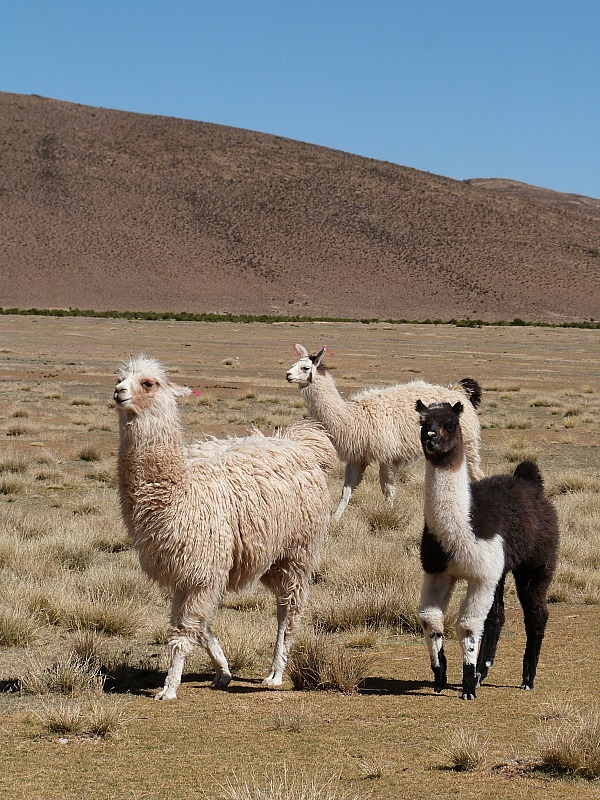 We stopped for lunch in a field with more llamas then drove the rest of the afternoon to the small village where we spent our first night. Our accommodation for the first night was in San Antonio de Lipez, a dusty town with buildings made of mud brick. 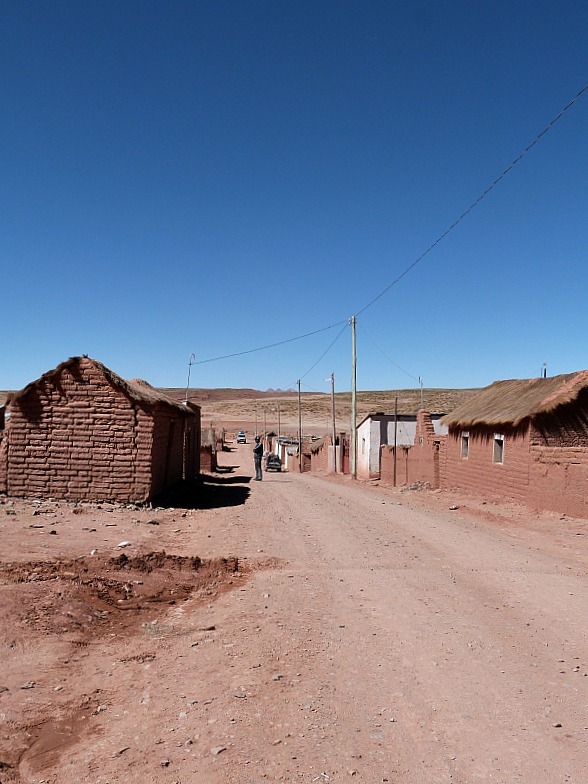 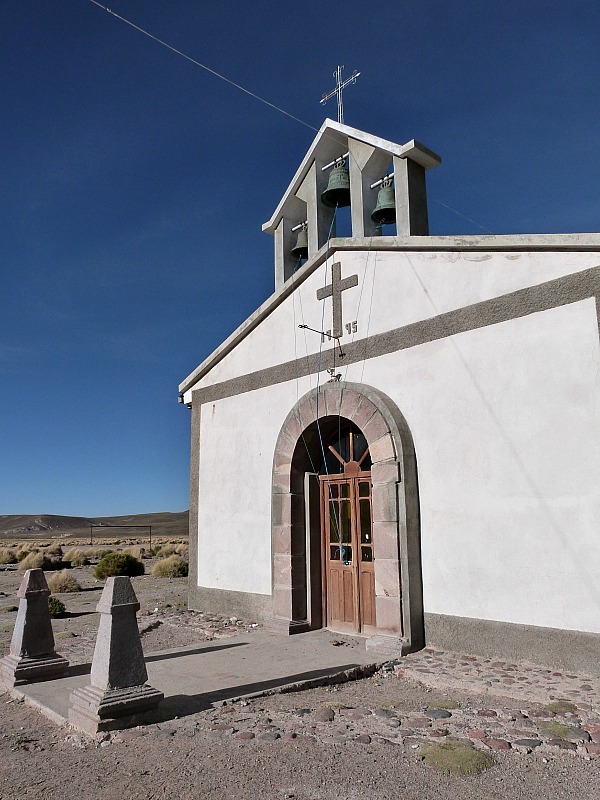 It got pretty cold as soon as the sun went down so we snuggled up in our beds, reading, until dinner was ready. The accommodation was pretty sparse but the beds were comfortable enough and we were given lots of blankets so we had a surprisingly good sleep.

Unfortunately it wasn’t long enough as we were awakened at the ridiculously early time of 5am as Day two is the longest day with the most ground covered.

Our first stop on Day two was at the ruins of an old Spanish town, abandoned a couple of hundred years ago. The sun was just rising and it was very atmospheric.

I saw a large rabbit/chinchilla like creature with a long curly tail called a Viscacha. I love Ghost towns and could have explored for hours but we were on a tight schedule so it was onwards to the next stop. 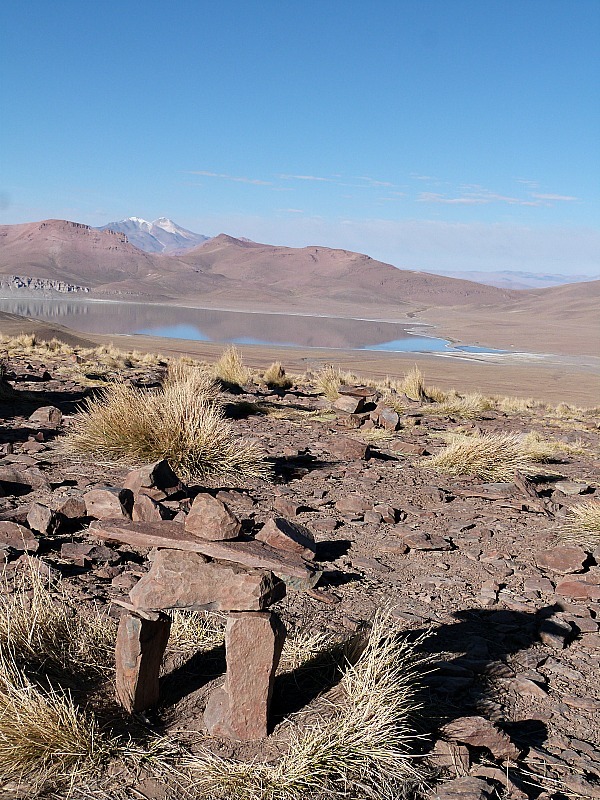 We drove through a few shallow rivers where ice had formed overnight, this confirmed that it was in fact FREEZING cold and that we weren’t all just pussies. We stopped to pay the entry fee to the National Park.

I was happy to stop here as there were three black kittens that were just begging to be picked up and cuddled by me. Not long after entering the park we saw our first flamingos! They were feeding in a stunning mirror lake backed by mountains.

We didn’t stop for long here as our guide said that the next lake had even more flamingos and he wasn’t wrong. 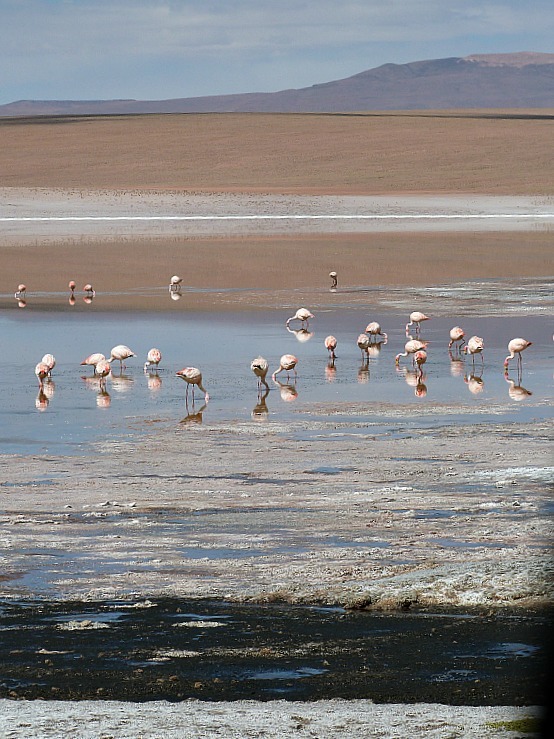 As we crested the hill, a massive lake was revealed with hundreds of brilliant pink flamingos crowded in its waters. Stopping here for longer, we took more flamingo pictures than one would ever need.

They really are photogenic birds and they let us get quite close to them, so busy with extracting whatever they were eating from the mud to notice us. 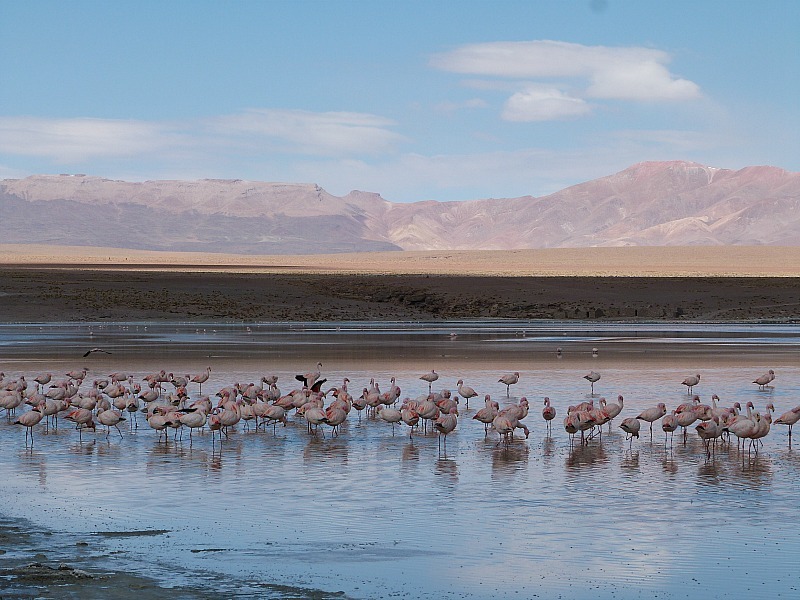 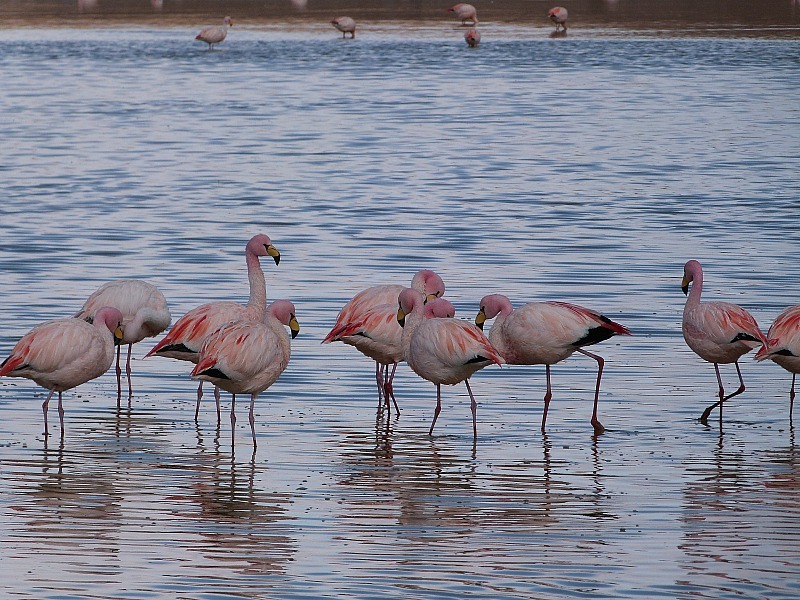 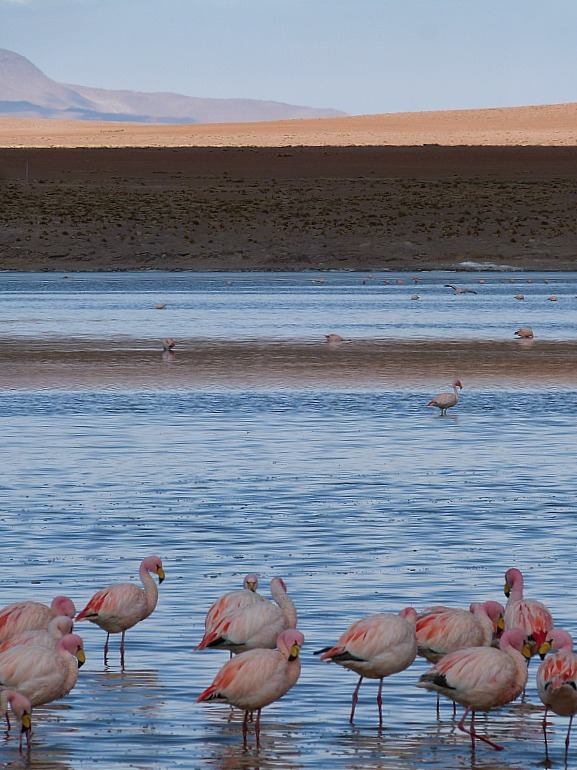 We stopped for lunch by a small natural hot spring pool surrounded by a moonlike landscape. It was shallow with a black sand bottom and a blissful relief from the cold.

After 9 years away from New Zealand, I never take a good hot spring for granted anymore. 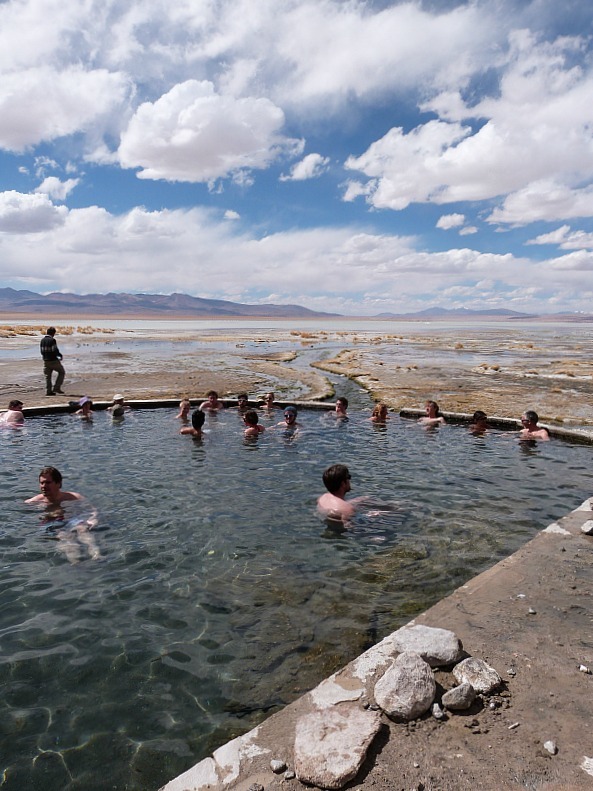 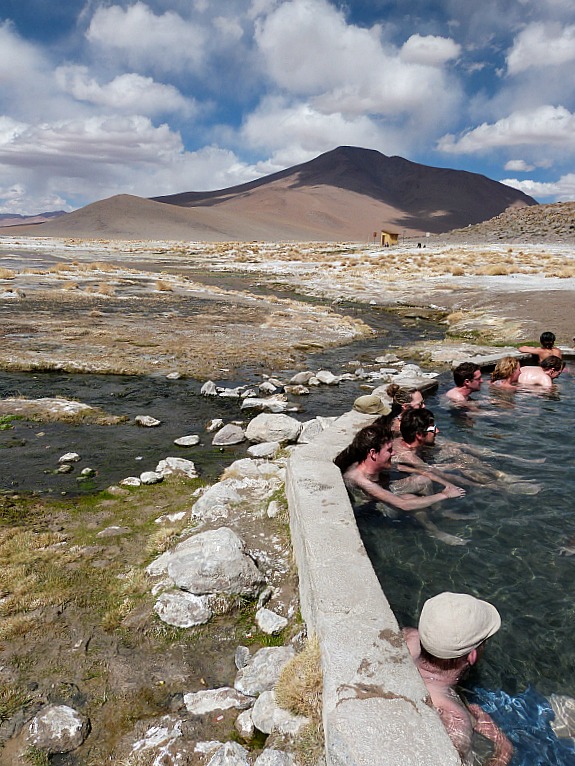 After our refreshing soak, we had lunch then set off to see more amazing lakes. Laguna Blanca, Laguna Verde, Laguna Colorada – they were all beautiful with magical colours against the harsh landscape.

I especially liked Laguna Colorada as the water is bright orange which is such a contrast with the pink of the flamingos; it is a very unusual color combination to see occurring naturally. 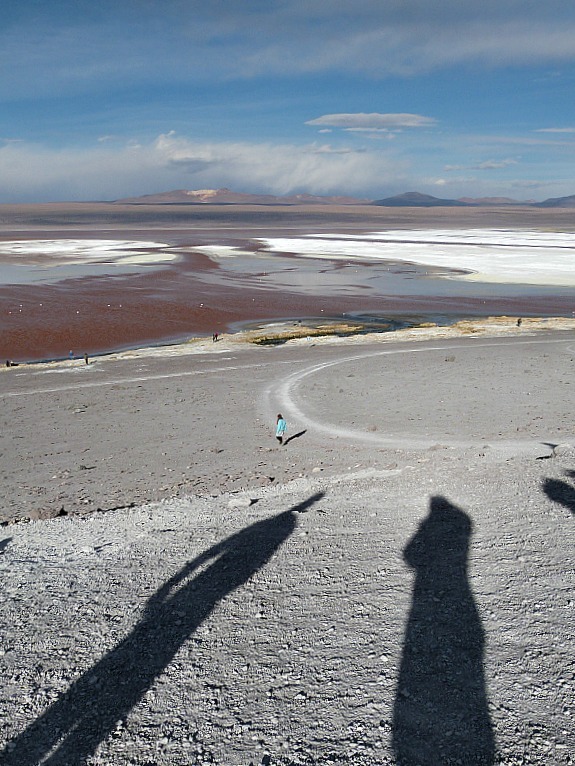 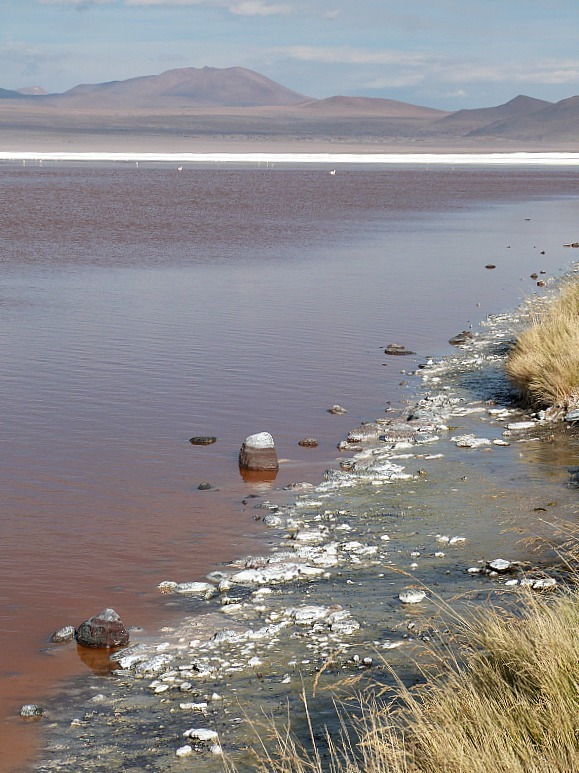 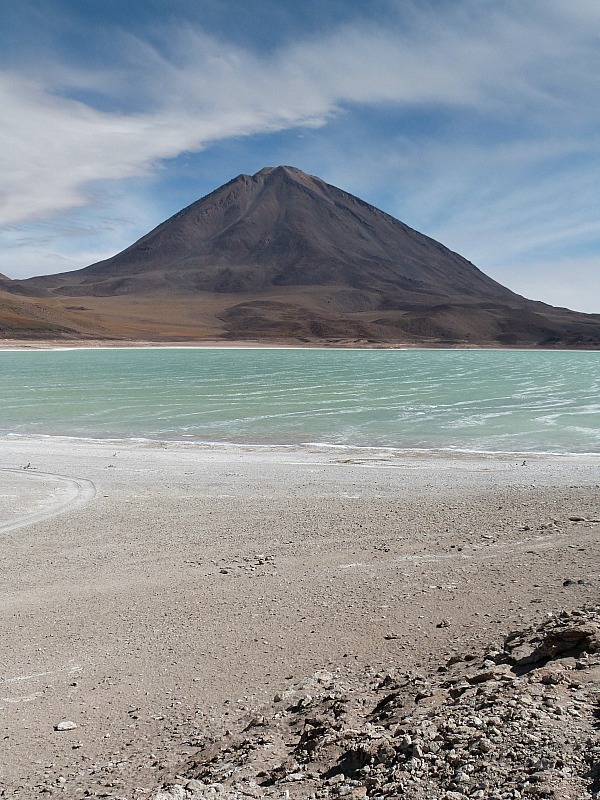 Other stops on the busiest of days included steam vents and Dali’s desert; a sandy nothingness with a few big rocks sticking out at random intervals. This other-worldliness inspired Dali in a lot of his work and I can see why. 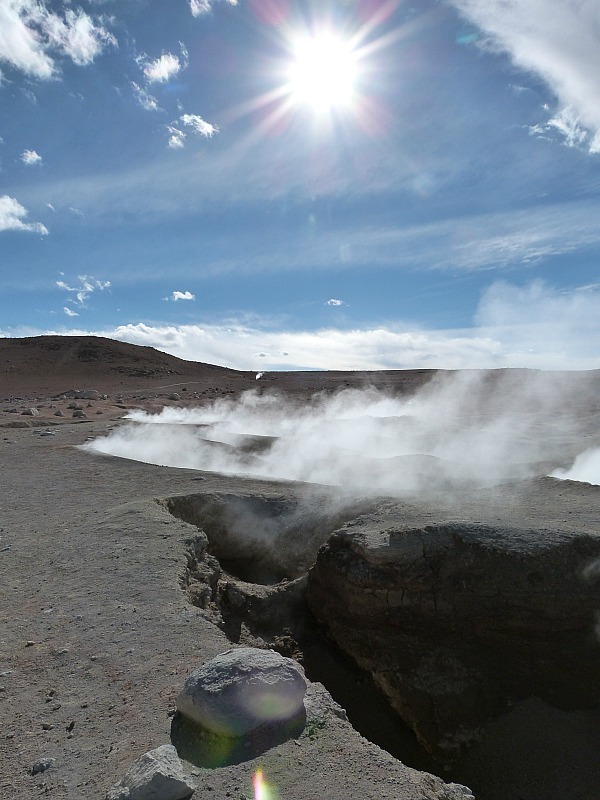 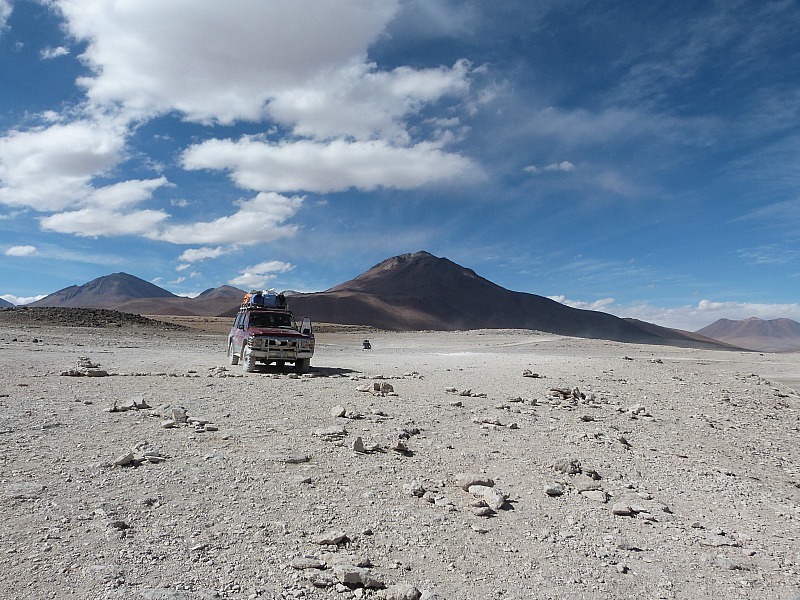 Everyone was completely shattered by the time we got to our lodging for the night. Once it got dark, the temperature rapidly dropped.  I honestly don’t think I have ever been so cold in my life and I lived in the UK for 7 years and spent a winter in Canada.

Despite layers of blankets I was still teeth chatteringly cold, so Trav and I had to share a tiny single bed to share what little warmth we had. It was a very uncomfortable night and I woke up a few times, dangling half out of bed.

Feeling in no way refreshed in the morning but glad to have survived the night without losing a finger or toe to frostbite, we set out for our third day of the tour.

Day three was a lot more relaxed than the hectically busy day two but it was also not as spectacular. We visited some weird rock formations and more beautiful lakes resplendent with flamingos and backed by multi-coloured volcanoes. 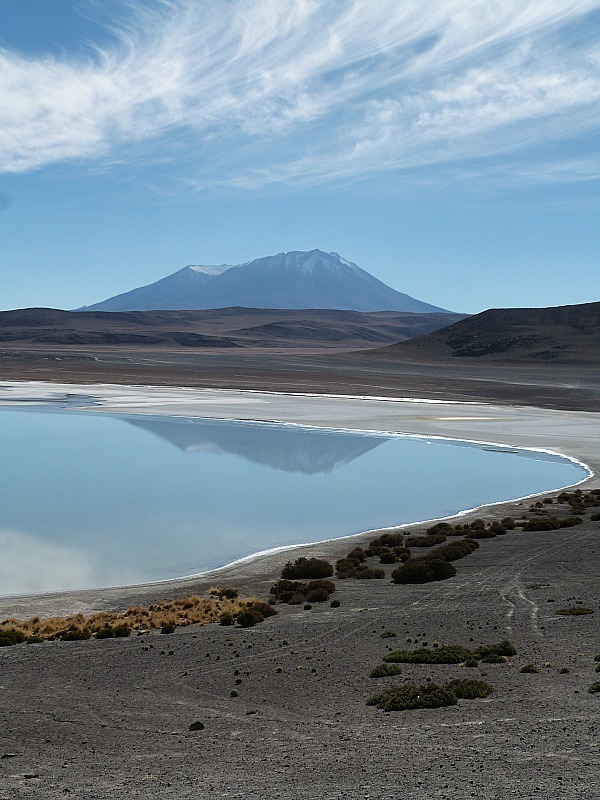 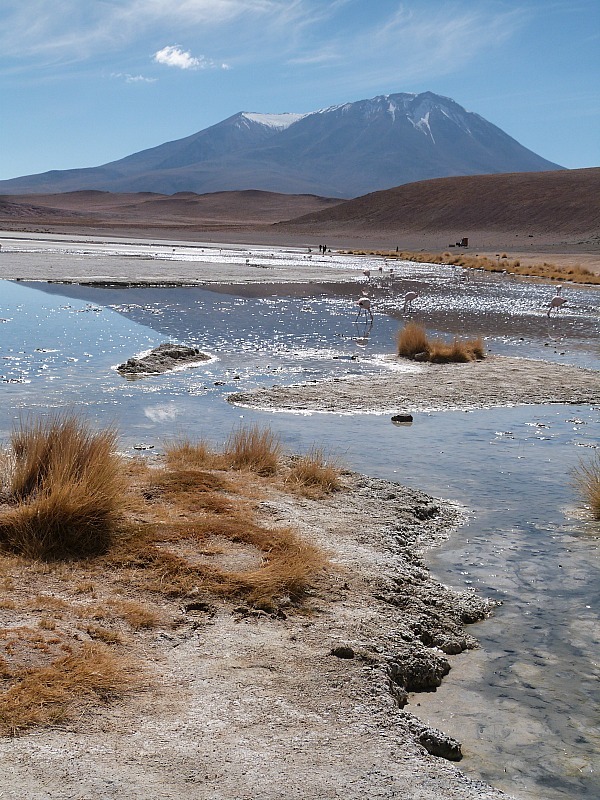 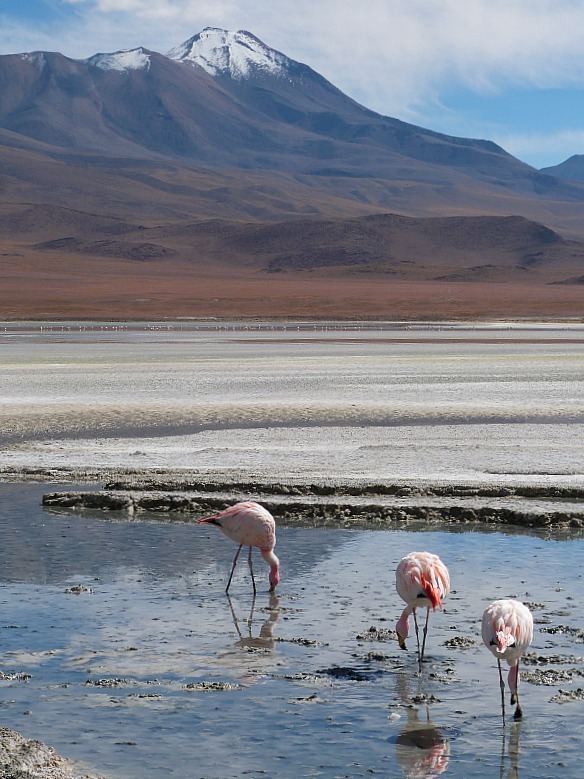 We saw foxes running in the desert (I had previously only seen them rummaging through people’s rubbish in London), enjoyed lunch at some more weird rock formations which were created from hardened lava from a long past volcanic eruption, and drove across a dirty salt flat. 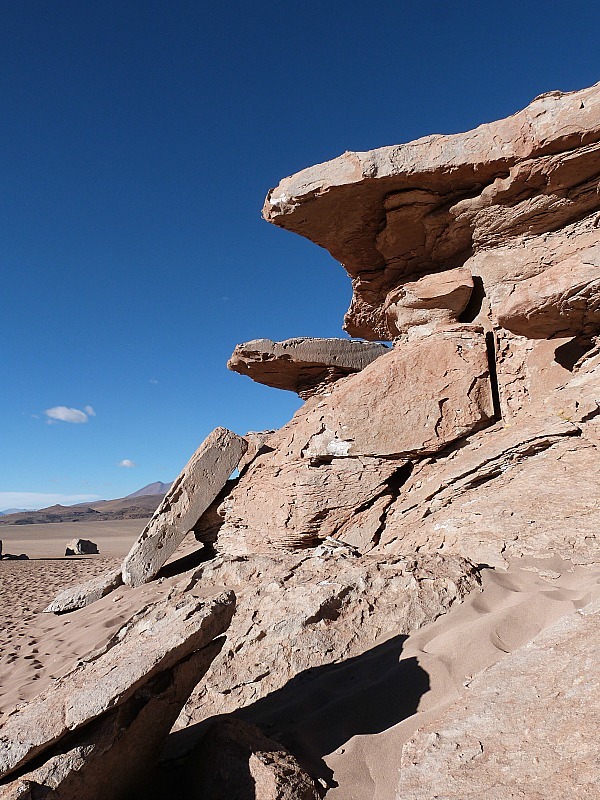 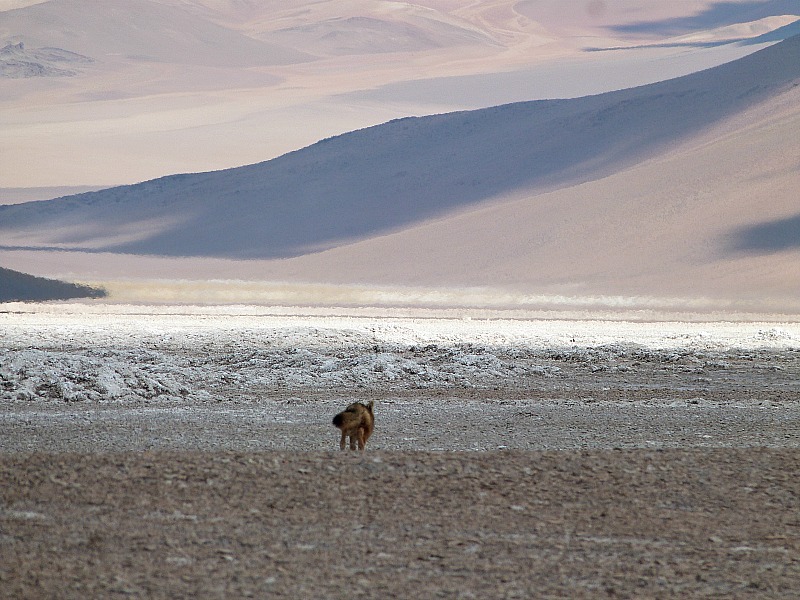 We finally reached our last nights accommodation; a Hotel made of salt, on the edge of the Pièce de résistance of the tour: the Salar de Uyuni.

The Salt Hotel was quite luxurious compared to the places we had stayed the two nights previous and one of the more unique places we have stayed on this trip as a whole.

The walls and beds were made of bricks of salt and the floor was tiny rock salt pebbles. We had a hot shower for the first time in a couple of days which was like a religious experience and then had our last dinner together as a group.

It was so much warmer than the other nights as we had dropped down nearly 1000 metres in altitude and we had a blissful sleep.

We were awoken at 5am to see the sun rise over the salt flats. We drove about halfway across then stopped to wait. It was FREEZING outside so we took a few pictures of the salt flats in the pre-dawn glow then got back into the jeep to wait for the big event.

The sunrise was spectacular with the white expanse of the salt flats changing color as it rose. 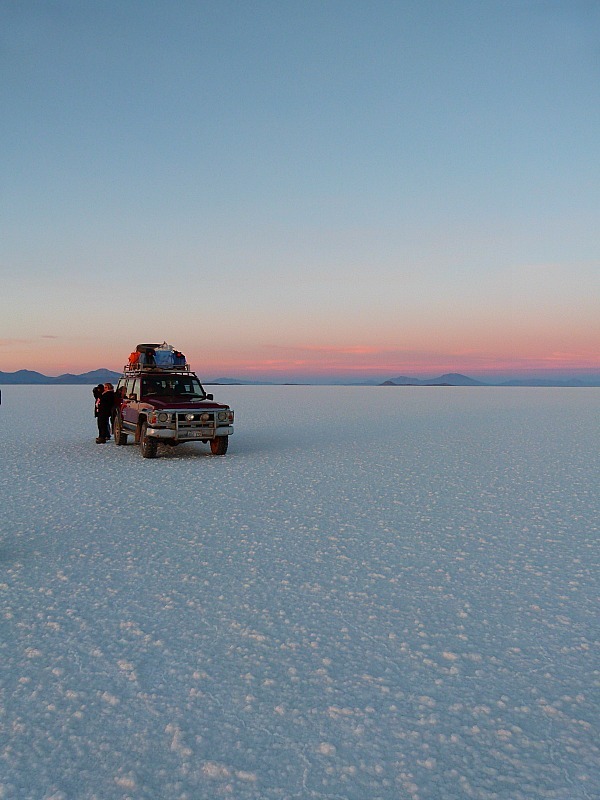 We ate breakfast outside the van, still freezing, then drove further out into the Salt Flats for some of the optical illusion photos that people always take. We noticed a lot of cracks and holes in the salt, it is actually only a thin layer of crystallized salt with water underneath.

There were some amazing salt crystals, perfectly square shaped, that had formed in the water. It was quite fun staging the photos, what wasn’t so fun was my leg breaking through the thin layer of salt and wetting my entire leg with very cold, salty water up to my knee. 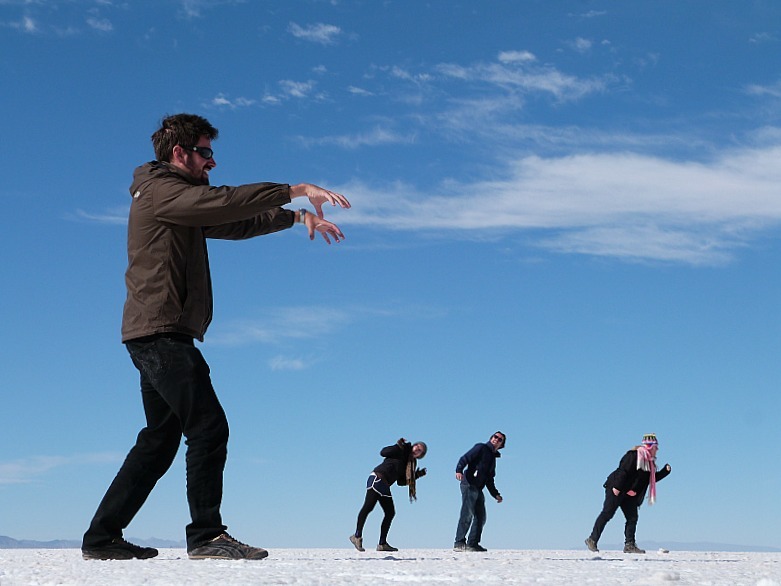 Seriously, I keep thinking my luck might be changing then something like this happens, it was my broken toe foot as well. I have never even heard of this happening to anyone at the Salt Flats before!

We visited a Salt Hotel in the middle of the salt flats briefly. It apparently pollutes the salt flats and was illegally built but there were signs saying that they transport their waste away from the flats so who knows.

We finished our four day tour with a visit to the Train Cemetery in Uyuni. It is what it says it is, a place where old trains go to die. There are some pretty cool old, rusted Steam engines and swings rigged up between a few of them.

It is an oddly interesting place; I always have had a fascination with cemeteries. 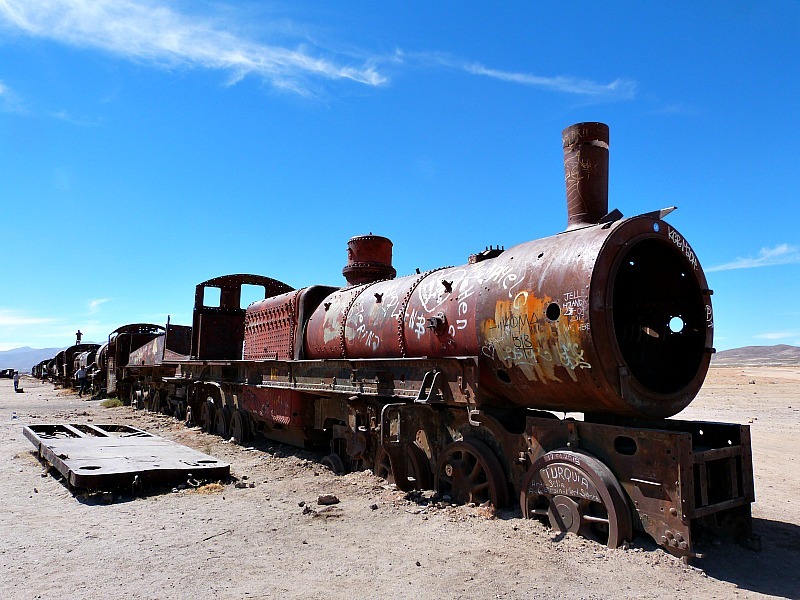 The other two in our group were staying in Uyuni for a night (had to feel sorry for them, it was a real craphole of a place) but we were staying on the jeep back to Tupiza.

The scenery was really stunning on the way back  and we saw more Wild west wilderness that was achingly beautiful. I had my head (with camera) stuck out the window pretty much the entire ride back.

We checked into a cheap hotel and watched Planet of the Apes on TV; it was actually more enjoyable in Spanish.

Our last day in Bolivia was spent relaxing pool side at the Hotel Mitru and hiking to a couple of Canyons outside of town.

I really could stay in Tupiza for a long period of time, exploring the amazing places surrounding town, but we thought it was about time we headed to Argentina.

We had been told that the waits at the border could be quite long but we had no trouble crossing and it actually ended up being the fastest border crossing we have done on this trip. We were so relieved to be out of the stress of Bolivia with its numerous strikes and road blocks.

We arrived into Argentina only to be told that all of the long distance buses in the country were on strike so we couldn’t get to Salta.

And so begins a new chapter of our trip: different country, same old crap.

2 Comments on The Best Tour of South West of Bolivia: Salt Flats and Beyond