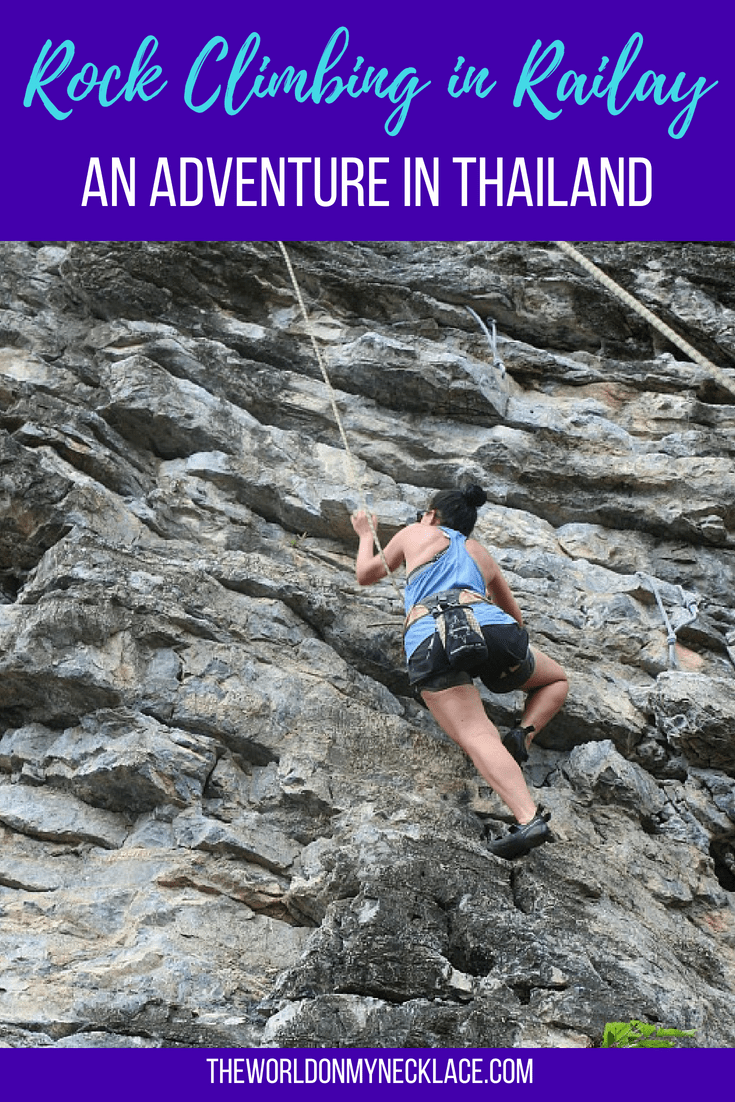 As I stepped off the long tail boat onto the beach in Tonsai, a small bay just around the corner from Railay Beach,  the first thing I noticed was the dirty sand and murky water.

I wasn’t expecting it to be as beautiful as the beaches of Koh Lanta and Ko Phi Phi but I was still expecting something more attractive than what I saw before me. 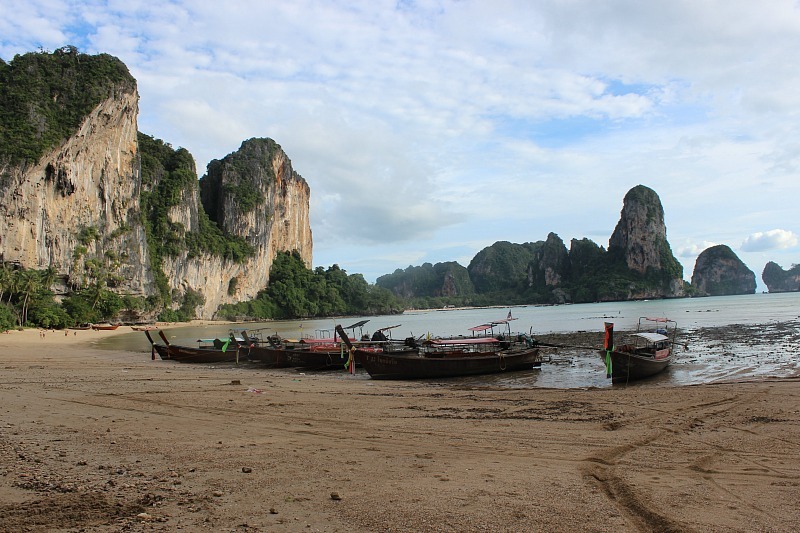 Tonsai was chilled out and unpolished. Rustic cafes offered mushroom shakes on psychedelic lettered signs along the bumpy dirt road that constituted a main street.

Dread-locked pseudo hippies wandered around at a glacial pace under the beating sun. Stray dogs drunk from dirty puddles along the pockmarked trail behind town. 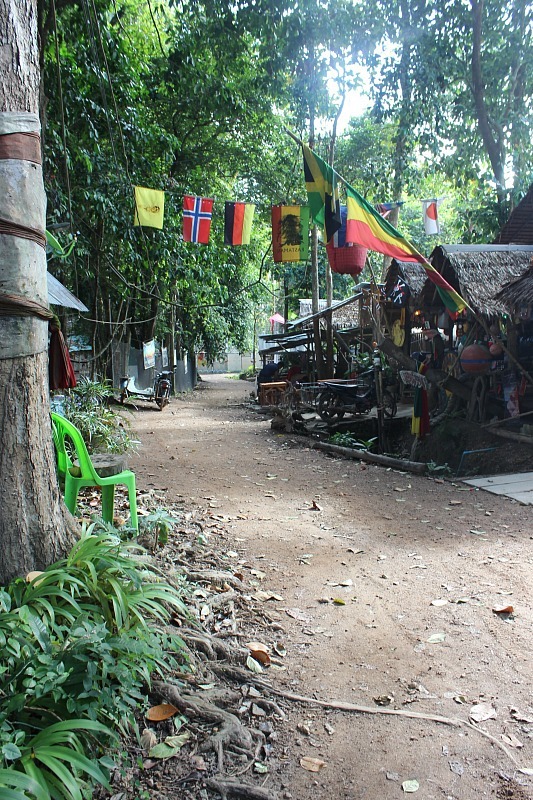 Not really my scene.

So why had I come to this waster ‘paradise’ you may ask? For the rock climbing.

Tonsai and Railay Beach in Thailand’s Krabi Province are known worldwide as premium spots to rock climb. Couple that with super low prices, it was the perfect place to learn the sport and to see if it is something I would like to do, without paying astronomical prices for the pleasure.

I have wanted to try rock climbing for a while as it was an activity that I thought I might like, given my love for abseiling. And what was rock climbing if not abseiling in the opposite direction?

I had heard that accommodation in Railay Beach was expensive and, wanting to save money, I had decided to head to Tonsai instead which also offered cheaper rock climbing courses.

Another option to keep costs down is to stay in nearby Ao Nang and do a day trip by boat from Ao Nang Beach to Railay Beach.

I opted to take a half day introduction course with Basecamp Tonsai, which I signed up for on arrival to begin bright and early the next morning.

After nabbing a cheap bungalow on a steep hill in the jungle behind town, I went out to further explore Tonsai. There wasn’t a lot to explore and unsatisfied with the detritus encrusted beach, I walked twenty minutes through shallow water, around the shoreline to Tonsai’s ritzier sister beach town: Railay Beach. 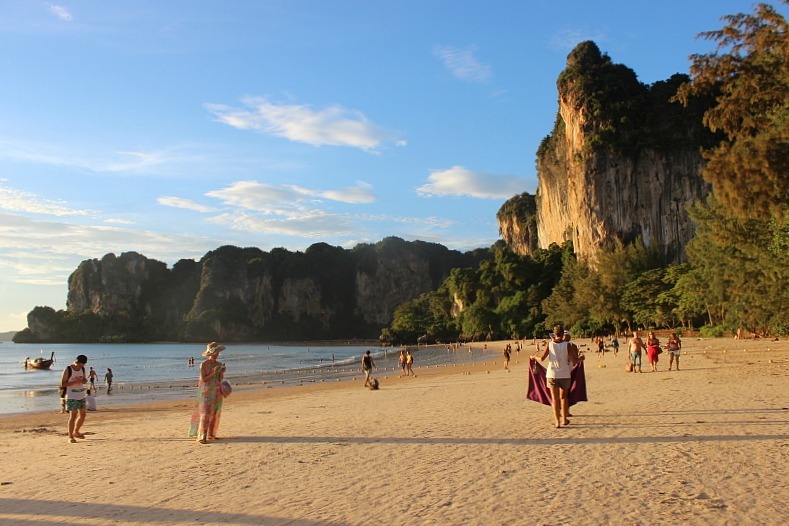 Railay beach was indeed nicer than Tonsai’s unpleasant strip of sand, but not by a lot. The surrounding rock cliffs smothered in thick jungle made for a beautiful setting, but the sand and water looked dirty. Railay beach was nice, but it wasn’t anything to write home about.

I swam for a bit until the tiny jellyfish stinging me got too much, then walked the souvenir shop and tourist restaurant lined main street to the estuary side of town, Railay East. You could definitely tell that Railay Beach was made for tourists. 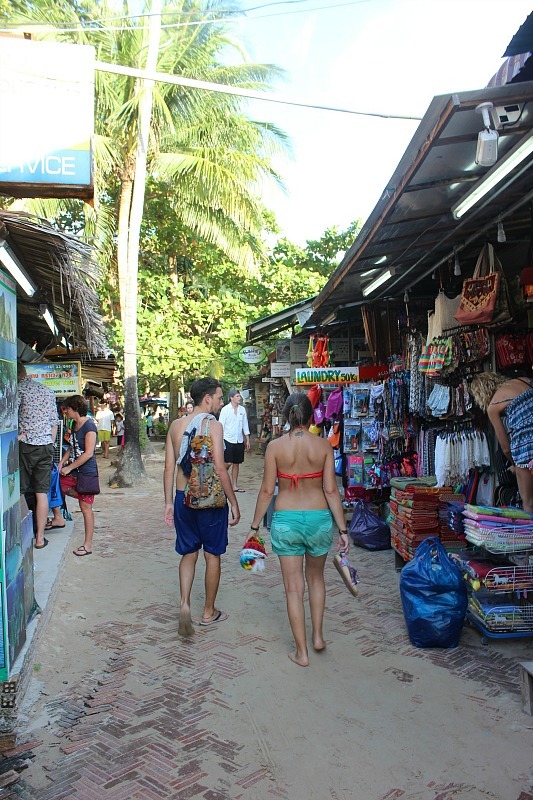 Railay East was quieter than the main beach area, which I liked, but it also stunk of mud due to the low tide exposing the mud flats.

There were lots of monkeys playing on the power lines and chasing each other through the trees along the pathway to Railay East. Very cute but bold after constant exposure to humans. I had been told that they couldn’t be trusted. 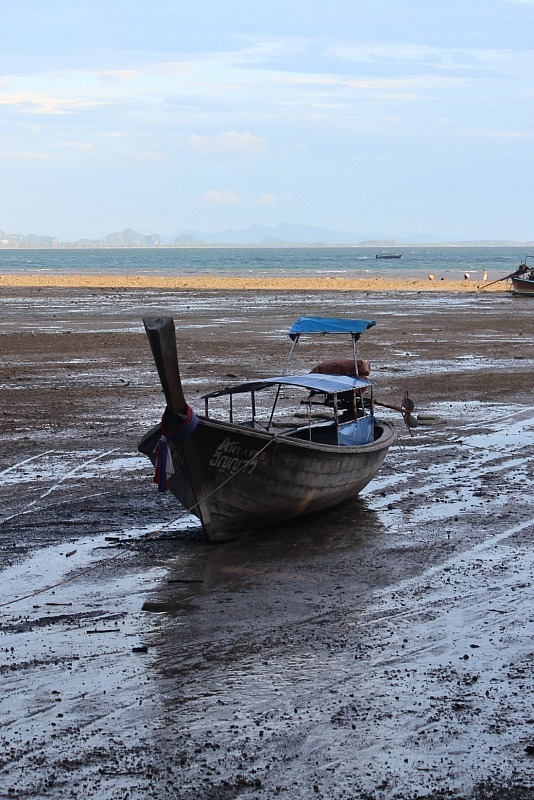 Walking back over to Tonsai I arrived back just in time for sunset, and I will give Tonsai this, it was an INCREDIBLE sunset. A crowd gathered on the steps leading up from the beach. It was one of the best sunsets I have ever seen. 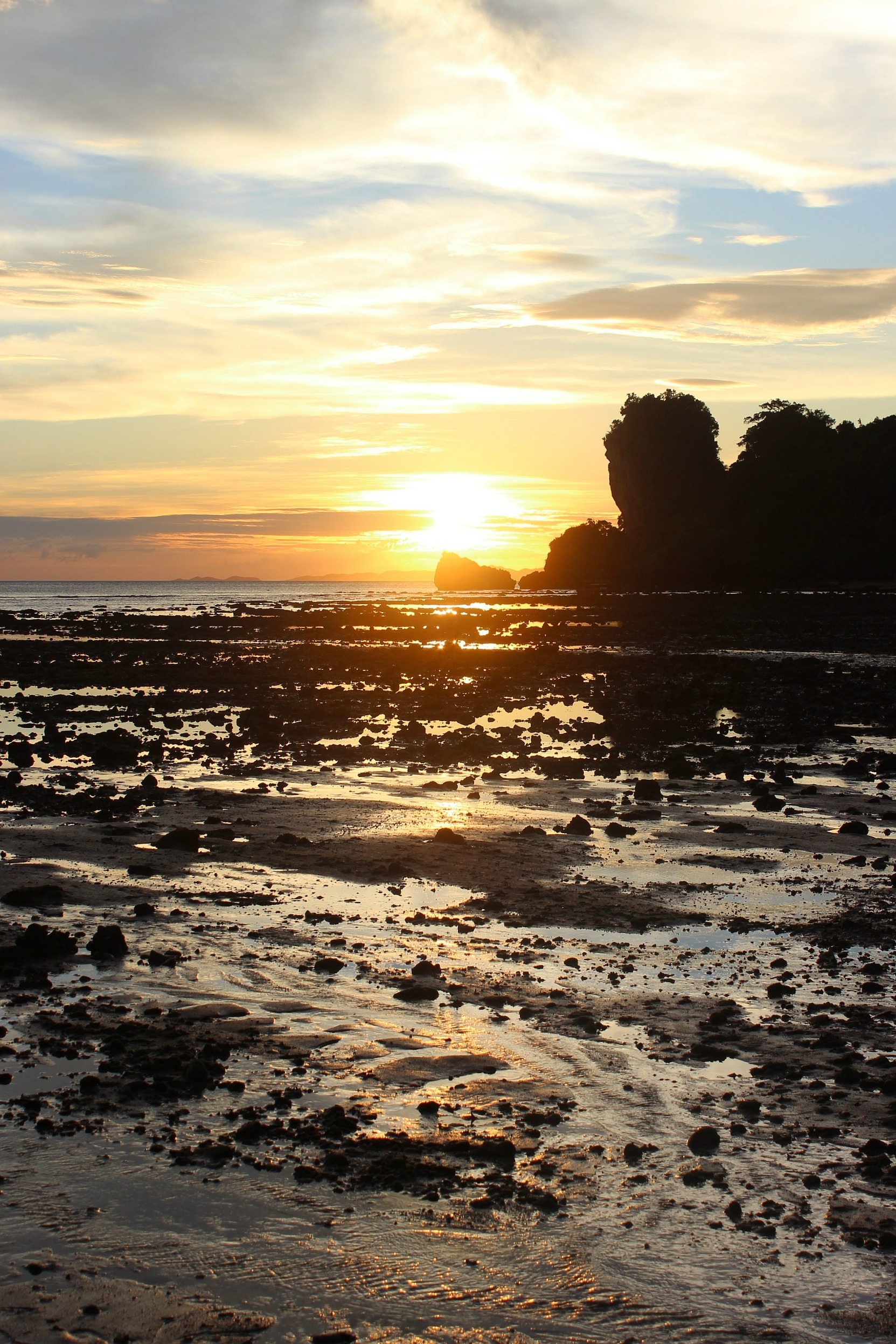 The next morning I checked in to Basecamp where I was given my gear then asked to follow the climbing instructors and other climbers down to the boat where we were to catch long tails around to Railay Beach.

After a long wait, sheltering under the shade of a large tree, we were on our way. On arrival in Railay Beach we were split into groups. My group consisted of me, our instructor, a rail thin Thai guy who had just got back from climbing in the Alps; Anna, a German who grew up climbing with her Dad and brothers; and Natalie, an Austrian girl who, like me, was trying rock climbing for the first time.

We walked down the main street, stopping just short of Railay East where we turned off a side trail that lead us to a large rock cliff.

A couple of groups were already set up to climb there and we squeezed in beside them. Our instructor set up the ropes with the help of Anna, the only experienced climber in our small group.

Then it was time to get started.

It could definitely be said that we were thrown in the deep end. Pretty much just harnessed up and connected to the rope then told to climb the rock wall. This could have definitely been a bad thing but I didn’t mind.

The instructor told us where to reach and where to place our feet and hands when we got stuck, yelling out instructions from below. He told us that if we fell, not to grab onto the rope but use our hands to protect ourselves from slamming into the cliff face. This was enough for me, for a rock climbing introduction at least.

And from the first climb, I was hooked. 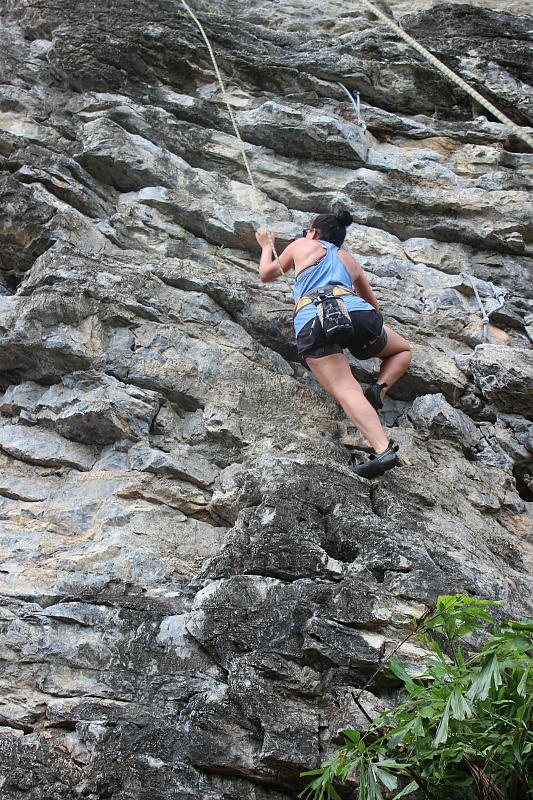 I was fearless. I loved the challenge and calculation involved in climbing. I loved using strength I didn’t know I possessed to cling onto a sheer rock face, high above the ground. I felt powerful and alive.

Damn, it was addictive.

We had turns climbing different routes, doing four in all over a couple of hours.

I fell once, scraping multiple spots on my body, but with adrenaline coursing through me, I barely felt it.  Anna commented on how I was a natural and I took great pride in that. She said I should definitely continue climbing.

On my last climb, after I managed to push past a point that I was stuck on for a while, I made it to the highest point yet, right up to the top of the rope. I was on top of the world, figuratively and literally (well, kinda).

Then as I was rappelling down the cliff, it started to rain. Hard.

We all grabbed our stuff and ran into the small local cafe by the climbing site. The deluge lasted about thirty minutes so we sipped Thai lattes, waiting for it to stop.

By this time the half day was pretty much up anyway, and with the cliff face now dripping wet, there was no more climbing on the cards for us. 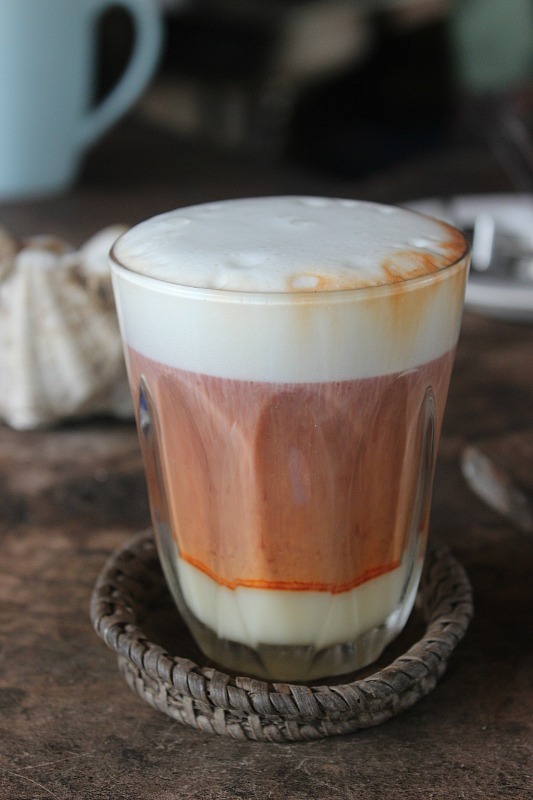 Anna, Natalie and I decided not to get the boat back with our climbing instructor, opting to stay in Railay Beach for the afternoon.

After lunch at a local restaurant, we walked around to Haad Phra Nang beach where there is a cave shrine full of wooden penises (true story) and some very aggressive monkeys terrorising beach goers.

Luckily we didn’t have any food on us or we could have very likely popped up on their radar as well. 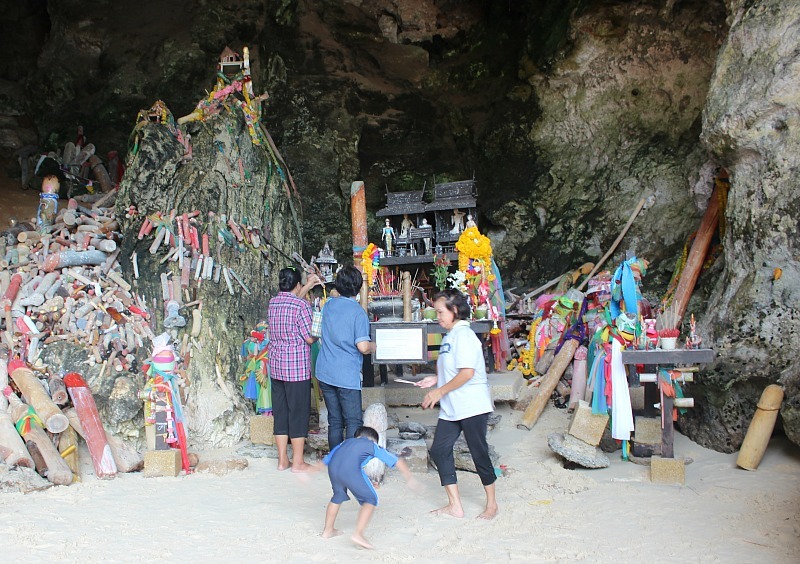 Haad Phra Nang beach was the nicest I saw in the area with the whitest sand and clearest water. It’s a shame the tiny stinging jellyfish were still present when we swam. 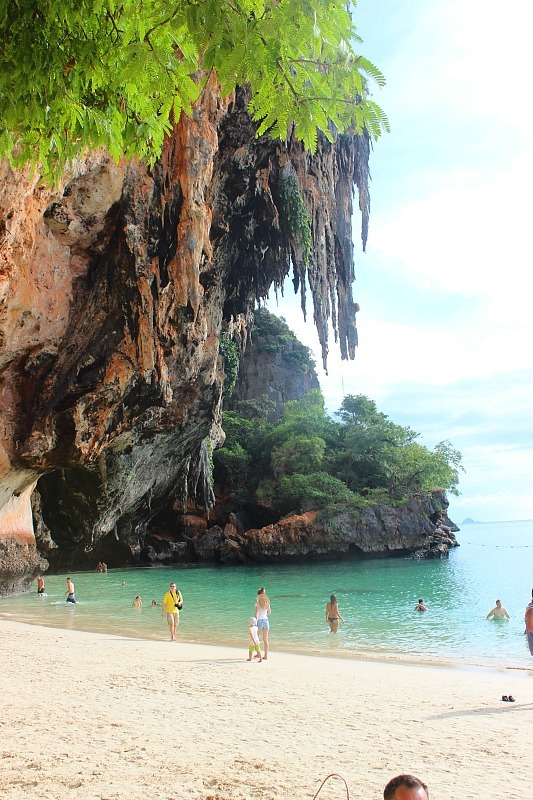 Walking back around the bay to Tonsai, we weren’t ready to part ways yet so after changing clothes back at our respective accommodations, we met up for dinner at a restaurant along the main street of Tonsai.

We tried different Thai desserts including an incredible red beans in coconut milk. After that we parted ways.

The next morning I woke up sore and exhausted. Muscles that had been unused for years ached something crazy, especially my arms and hands. It felt like someone had worked me over with a baseball bat. But I felt pretty damn awesome despite the pain.

As I was leaving Tonsai, I saw a kitten and a baby monkey tumble into the street, rolling around each other in the cutest play fight I have ever seen.

As if the rock climbing hadn’t been reason enough for making the trip to Tonsai, the play fighting monkey and kitten certainly was the figurative cherry on top. 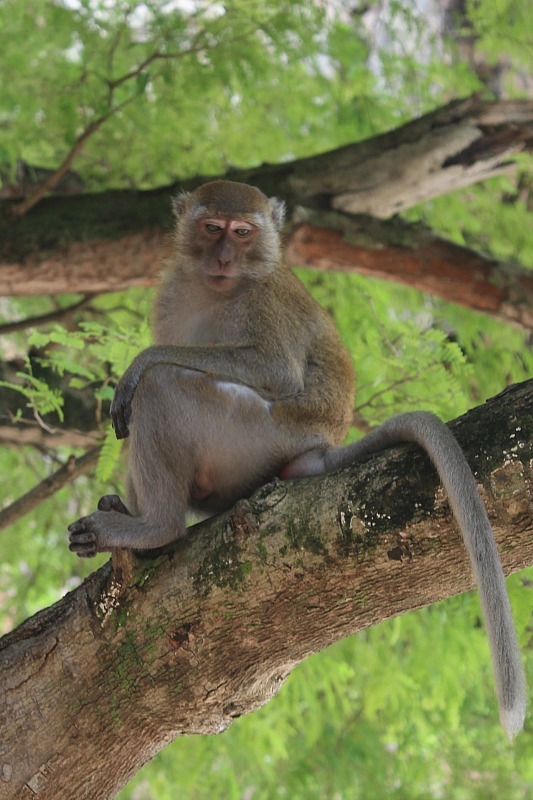 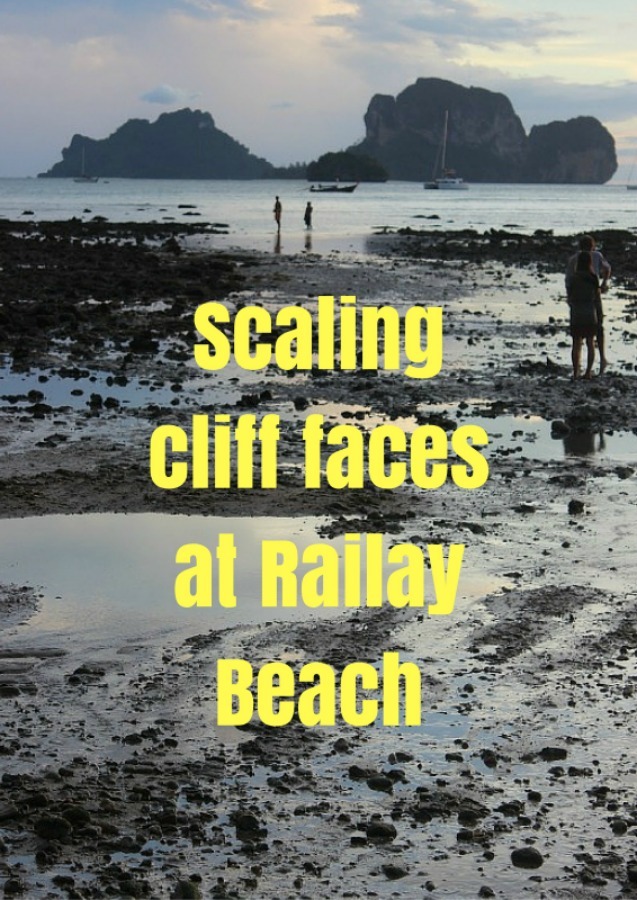