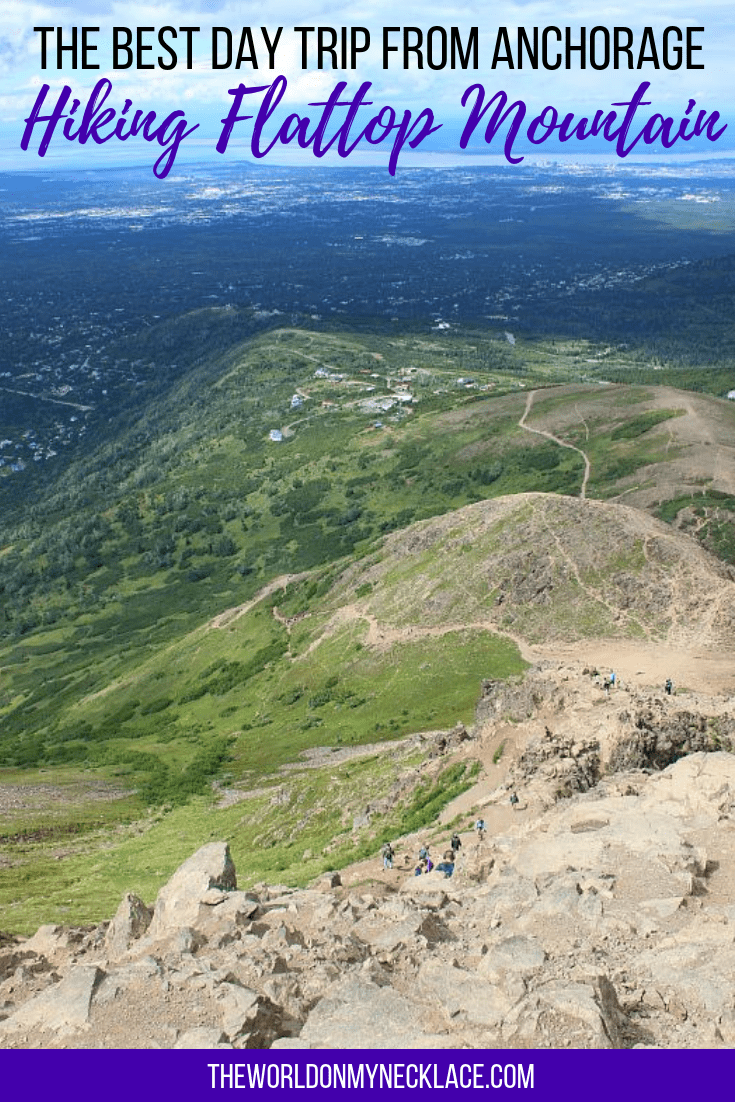 When I first looked into what to do in Anchorage one thing stood out above all others: hiking Flattop Mountain. Oh, and where to eat.

So pretty standard for me. Hiking and good food, is there anything more important in life?

I talk about the food in another post (spoiler alert: it was incredible!). This post is all about the time I summited Flattop Mountain, Alaska’s most frequently climbed mountain.

Located only 24km from the city, Flattop mountain is in the Chugach range, part of Chugach State Park, the third largest in the country at a massive 500,000 acres.

To get to the trailhead I booked with the Flattop Mountain Shuttle which leaves from downtown. Without a car, this was pretty much the only way to get there.

As I was boarding the shuttle I saw a Czech girl, Francesca, that I had met at the hostel. She was also taking the shuttle to Flattop Mountain so we teamed up as hiking buddies.

Francesca is living and working in Anchorage for the summer and is a dancing polar bear at one of the large gift shops downtown. Definitely an interesting job!

It only took 30 minutes to drive to the trailhead, passing strip malls and suburban sprawl along the way until suddenly we were surrounded by mountains.

I was excited to get started on my first hike in Alaska! 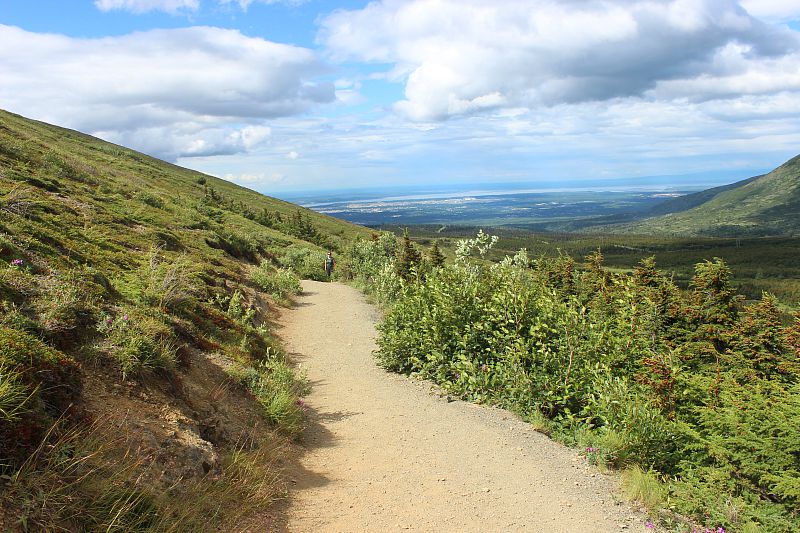 The trail began rising slowly along an exposed trail around the side of a small mountain. We decided that instead of following the trail around the side, that it would be more fun to hike up the mountain instead. We found a steep dirt path and about ten minutes later we were at the top.

The stunning views that the hike is known for were already beginning to unfold. 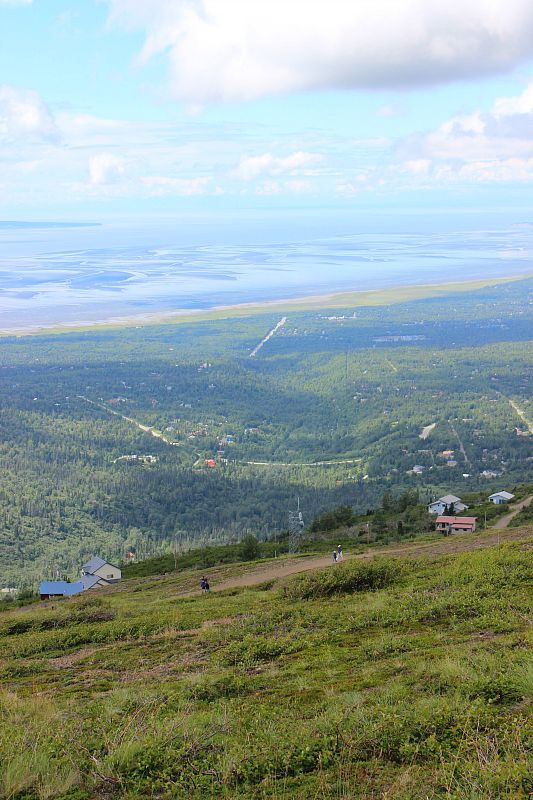 Anchorage sat far below us, the buildings just tiny specks in the distance. The Cook Inlet was marbled with streaky grey silt, large rivers of water coursed through the mud, with numerous smaller arteries radiating outwards.

The verdant Chugach Mountains surrounded us and we got our first glimpse of the summit of Flattop Mountain. It looked steep.

Hiking down the other side of our small mountain detour, we rejoined the throngs of people on the pathway. Then the stairs began. And there were a lot of them.

It was a steady incline, not too difficult if you are hiking fit but we did see quite a few people (mostly older and out of shape) that were struggling.

There was an older lady lying on the side of one of the steps that had fallen and hurt herself. Minutes later a helicopter circled, scouting the best place to land and rescue her.

Despite thousands of people climbing Flattop Mountain every year, it isn’t as easy as you would think. There are lots of rescues here annually, with the main injuries being sprained and broken bones or head injuries.

There have even been some deaths on the mountain. Nature can be cruel and must always be respected.

We reached the end of the stairs and that is when the hard part really begun. 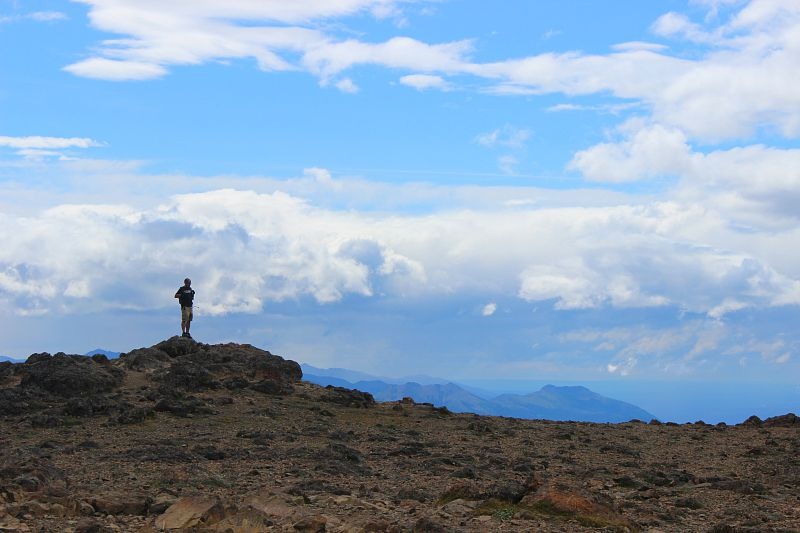 The last section of the hike to Flattop Mountain’s summit was intense. You have to literally scale large rocks and boulders, pulling yourself up each one before finally reaching the summit.

For someone like me with weak arms this was reasonably difficult although it only took about half an hour to reach the summit from that point.

The difficulty to get there made it that much sweeter when we reached the top. 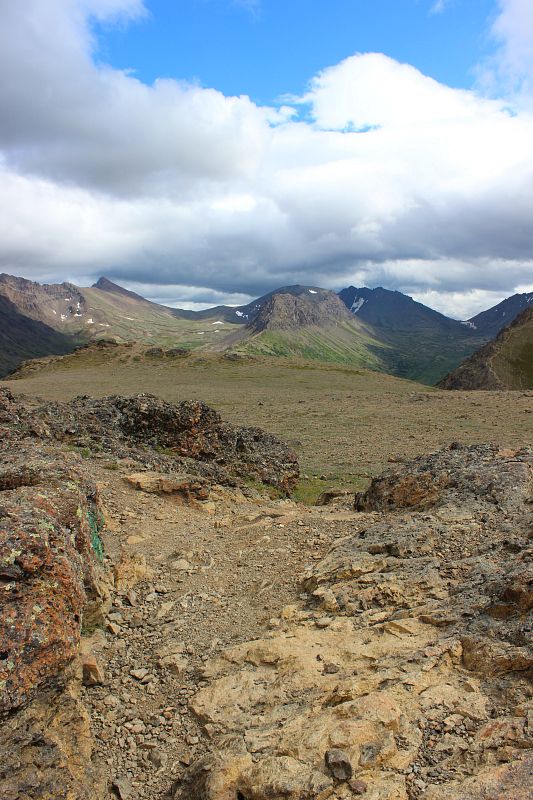 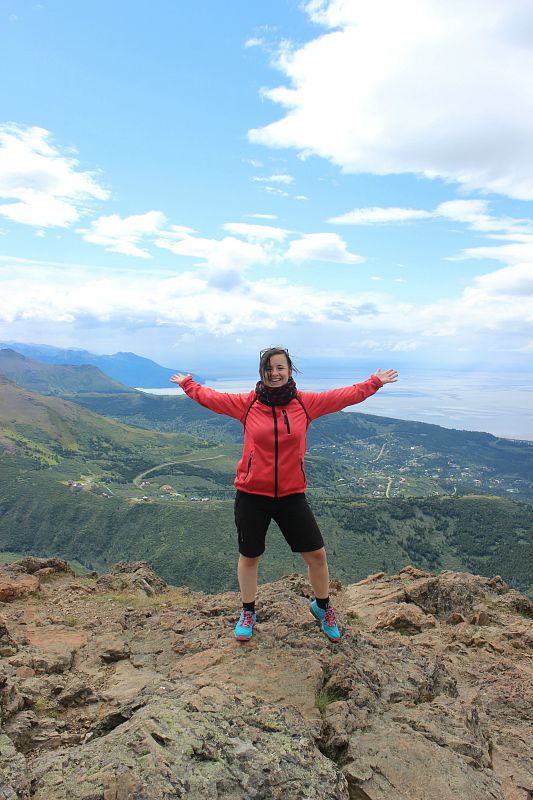 The summit was rocky and desolate. A cold wind wrapped itself around us and we were shivering within minutes.

A tattered American flag marked the highest point and it almost looked like it had been staked on the moon rather than a mountain within 30 minutes drive of a large city. 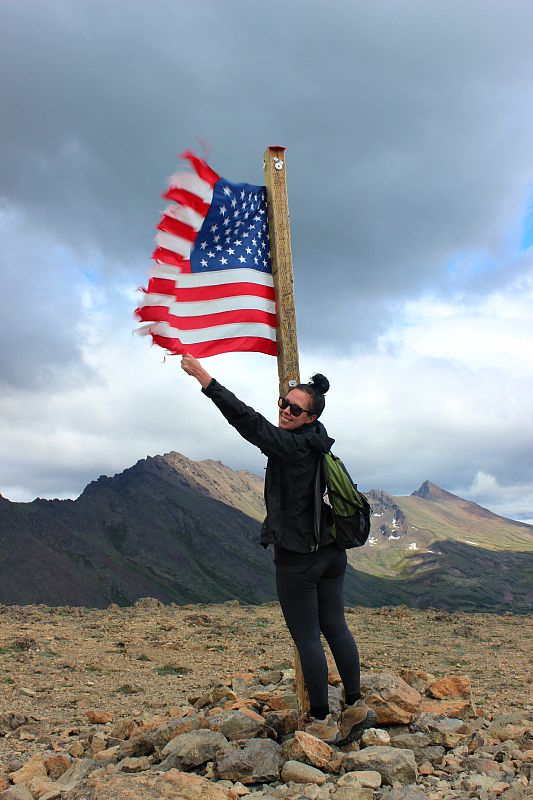 After taking a few photos of the stunning 360 degree views, I found shelter behind some rocks to escape the wind. Without it howling around me I was able to truly appreciate the beautiful landscape, my first taste of the vast ruggedness of Alaska.

Deep emerald green and brown was the colour theme, reminding me of the wild west coast of New Zealand and of Iceland. 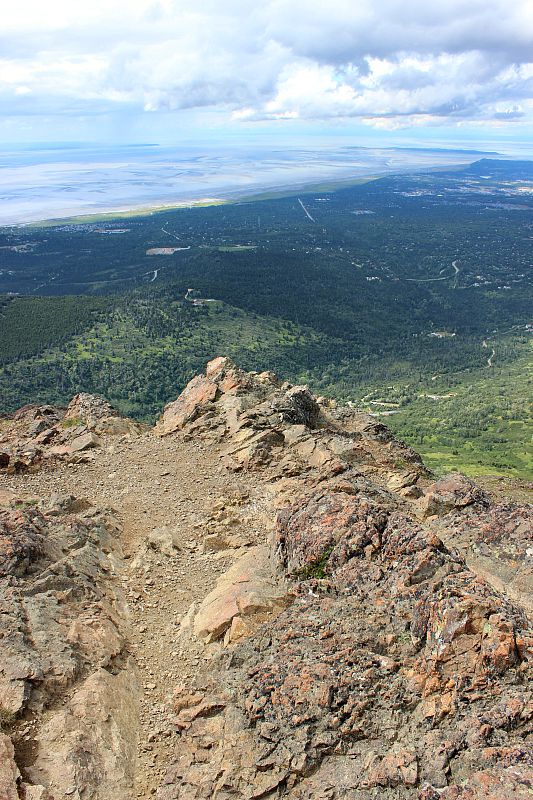 I have always been a fan of the dark colors of the world. They have a richness and primeval quality that speaks to me.

Getting back down Flattop Mountain was much harder than scrambling up had been. Nearly vertical with sharp rocks, one wrong step and we could be tumbling down the mountain in a shower of razor-sharp rubble.

We took our time to ensure we got down in one piece, easing ourselves along on our bums when needed. 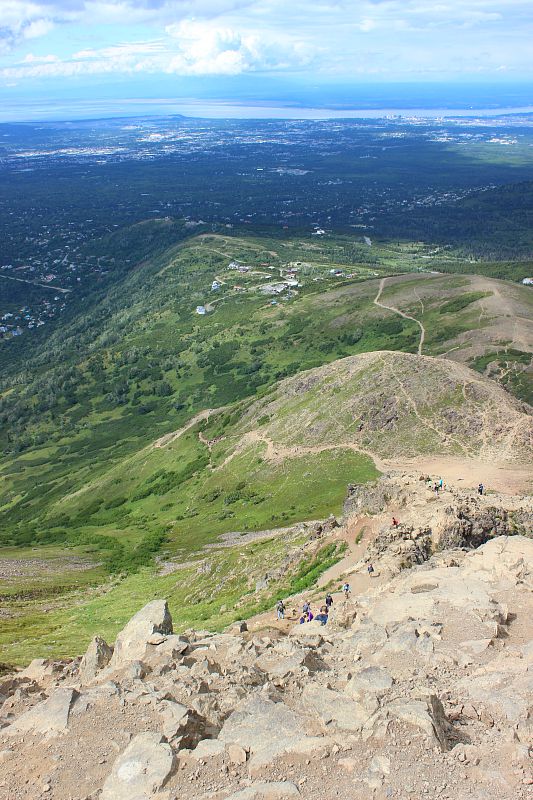 Once we were down past the steep and rocky slope the difficult part of the hike was over. We walked around an alternative path back to the parking lot past wildflowers and views across a mountain valley. The sun was peeking through a patch of blue sky and I was extremely happy with my first encounter with Alaska’s wild nature.

And hiking Flattop Mountain was only the beginning. 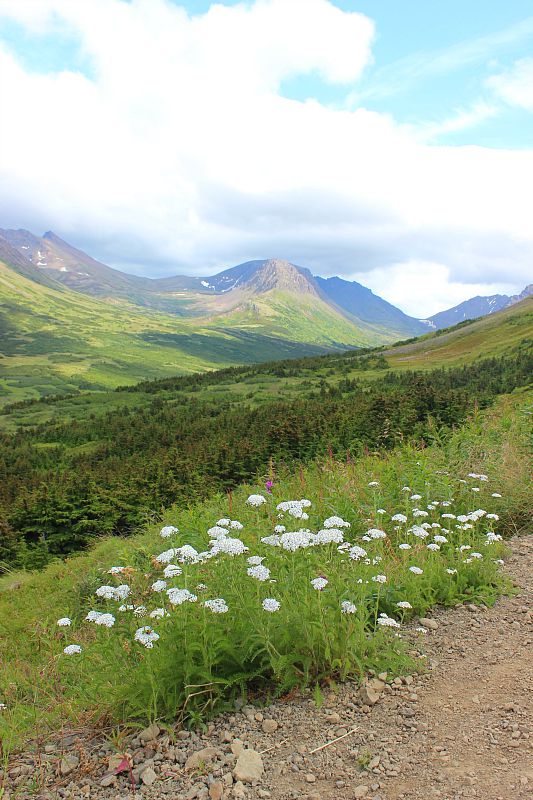 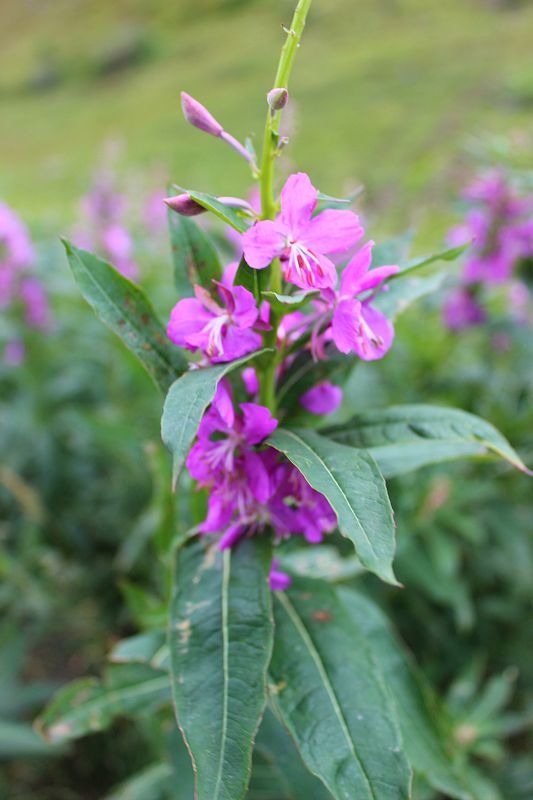 How to Hike Flattop Mountain

Getting to the Flattop Mountain Trailhead

Parking for the Flattop Mountain Trail

Certainly not the hardest hike I have done but more challenging than I thought it would be. Even though it is short, I would rate it as Intermediate to Difficult for inexperienced hikers.

Length of the Flattop Mountain Trail

Would you hike Flattop Mountain?