Hawaii
This post may contain affiliate links. If you make a purchase through an affiliate link, I will earn a commission at no extra cost to you. Thanks for your support. 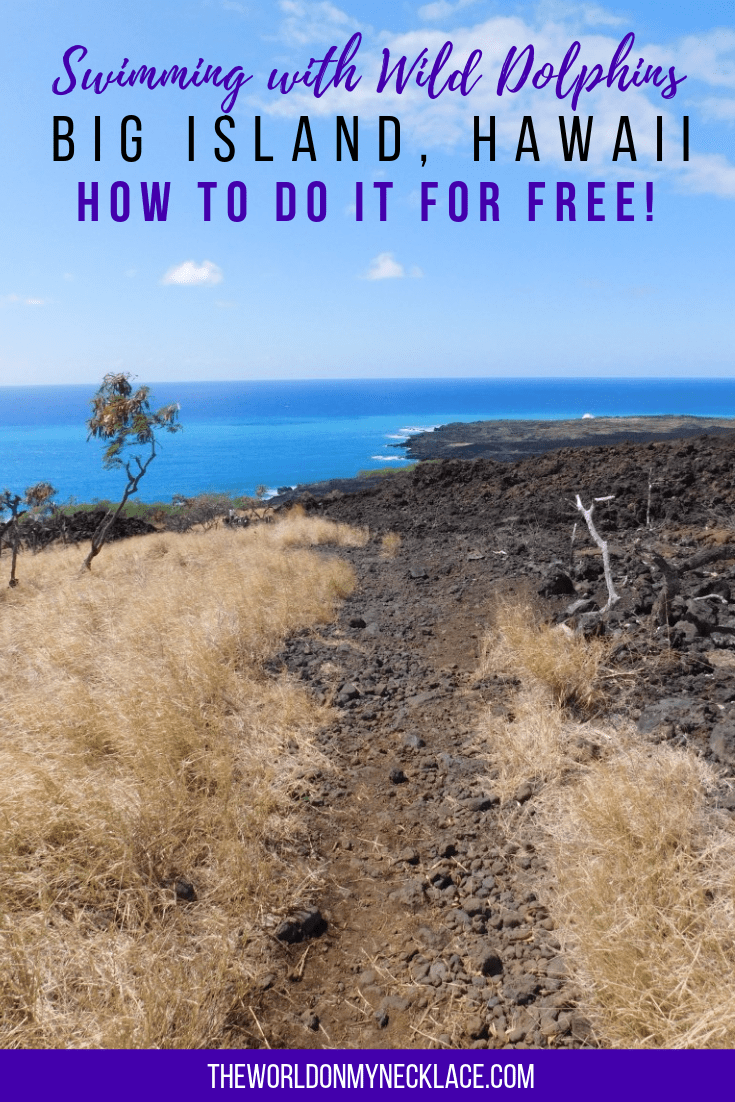 Read on to find out how I went swimming with dolphins on the Big Island of Hawaii – and didn’t spend a dime!

Everyone’s bucket list looks different but there are a few things that seem to pop up regularly, like swimming with dolphins.

So maybe it is a cliche that swimming with wild dolphins has been at the top of my bucket list for longer than I can remember. But it is what it is.

As other bucket list items were crossed off my list over the years, like experiencing the temples of Angkor Wat, hiking in Alaska, and doing a foodie road trip through the American South, I just couldn’t quite get it together to swim with wild dolphins, but not from a lack of trying.

I visited places where you can swim with dolphins in the wild – in Bolivia, Hawaii and New Zealand – and Mum and I even drove 90 minutes each way to find Moko, a bottlenose dolphin that was famous in New Zealand for swimming with locals on the East Coast, but still I had no luck. 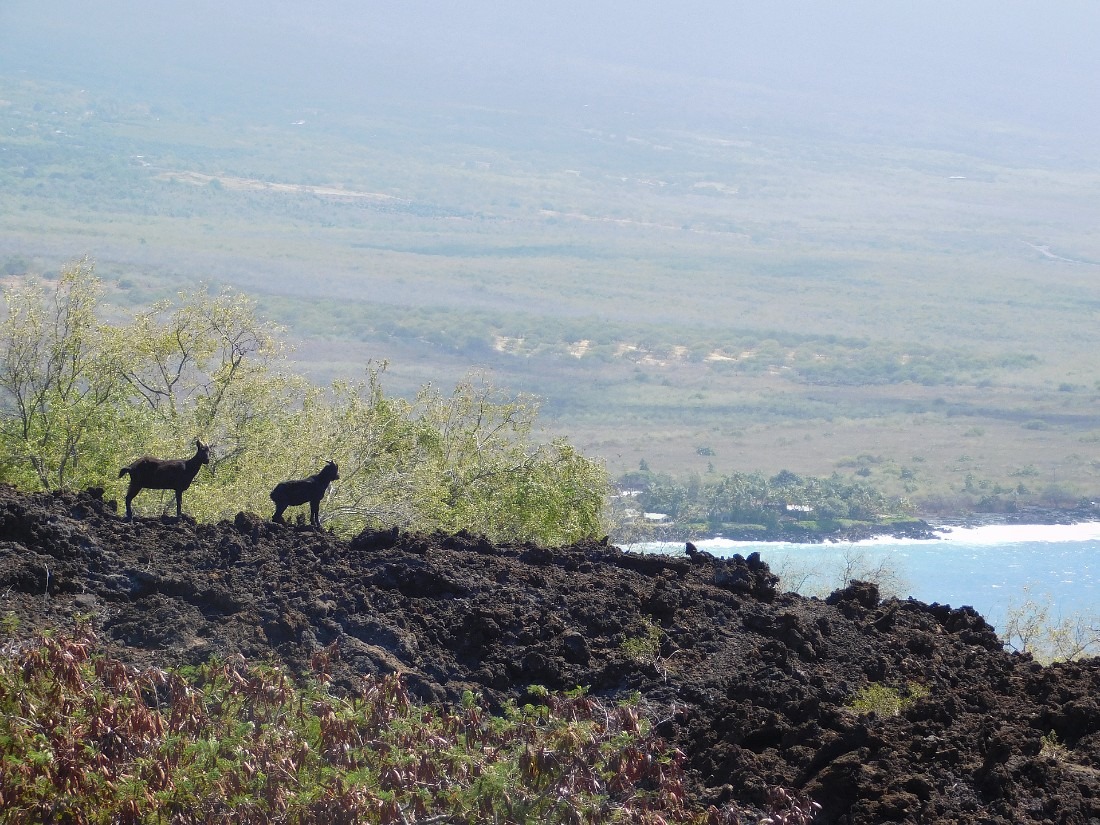 I was starting to think it would never happen for me. But I never gave up. And finally, a month ago my long-held dream came true: I got to swim with dolphins in Hawaii!

And it was even better than I imagined it could be.

Swimming with Wild Dolphins in Hawaii

I had actually been to Kealakekua Bay nine years earlier on my first visit to the Big Island. On that visit, I kayaked across the bay to the Captain Cook Monument in search of dolphins, but I didn’t see any. I was determined to try again on this visit.

Unfortunately, you can’t just hire kayaks and kayak across the bay any more unless you are part of a tour group with a permit, and that was out of our price range.

But there is one other way you can get there – by hiking the only Kealakekua Bay hike, down to the monument on the Ka’Awaloa (Captain Cook Monument) Trail. 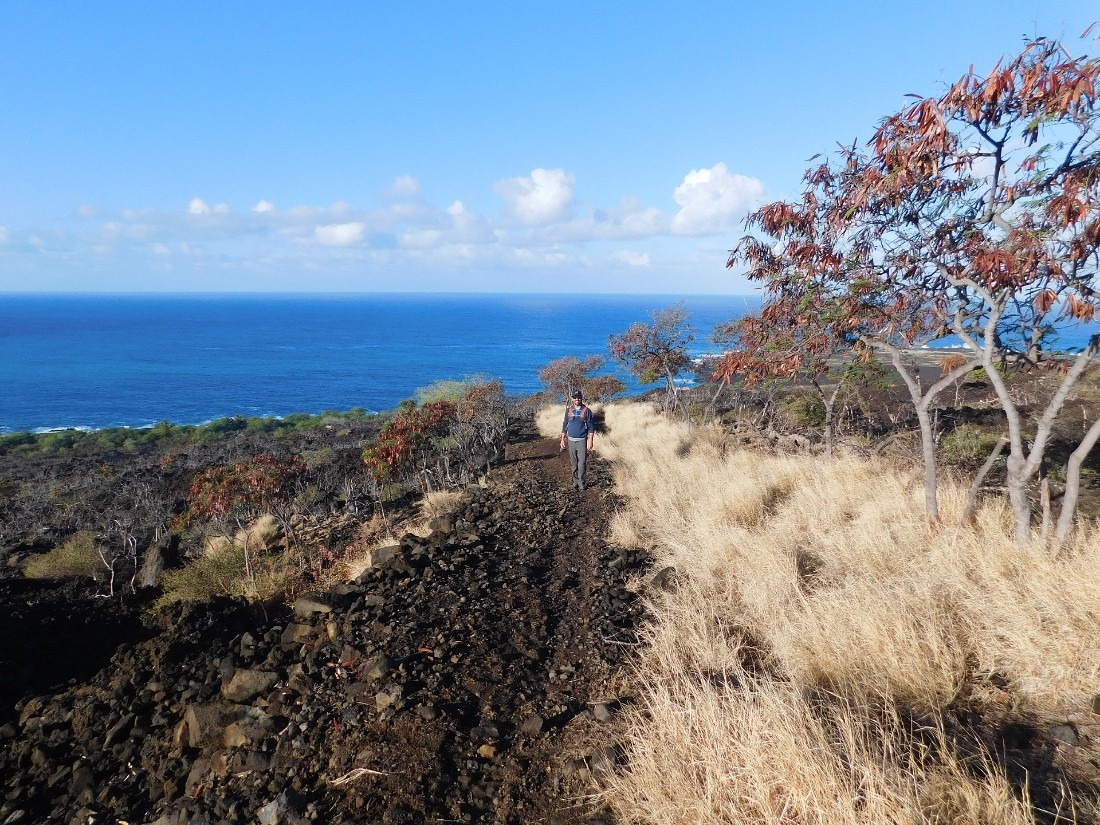 Everything I read online about the Captain Cook Monument trail made it out to be the hardest hike ever, with a brutal descent and no shade on an unmaintained trail. I have to admit, it scared me, and I was nervous about doing it, but the dolphins were calling, and their siren song turned out to be stronger than my fear.

We set off on a clear and sunny morning, a day after many of the beaches on the island were closed due to a high wind warning.

As we hiked down the rocky path, we quickly realized it was nowhere near as bad as it was made out to be. Sure, it was a bit rocky, but with proper footwear, it wasn’t an issue.

It wasn’t even that steep, compared to a lot of the mountain hikes I do in Colorado. My fears had been unfounded. 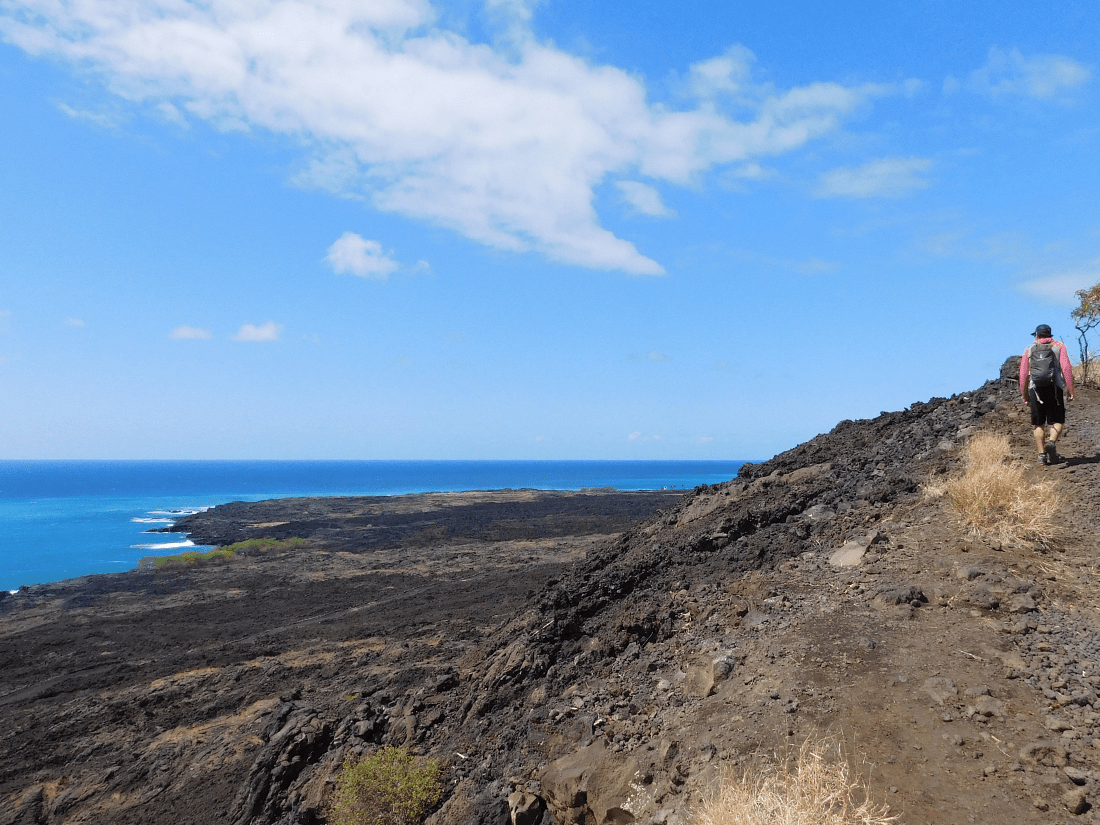 The further down we hiked, the more the views opened up. We pretty much had the path to ourselves and it was glorious. I knew that even if we didn’t get to see dolphins, it would have still been worth it.

Once we got down to the monument, near the spot where Captain Cook was killed, there was no one else around. Despite the still large waves battering the coastline, the water was calm and inviting in the sheltered bay. 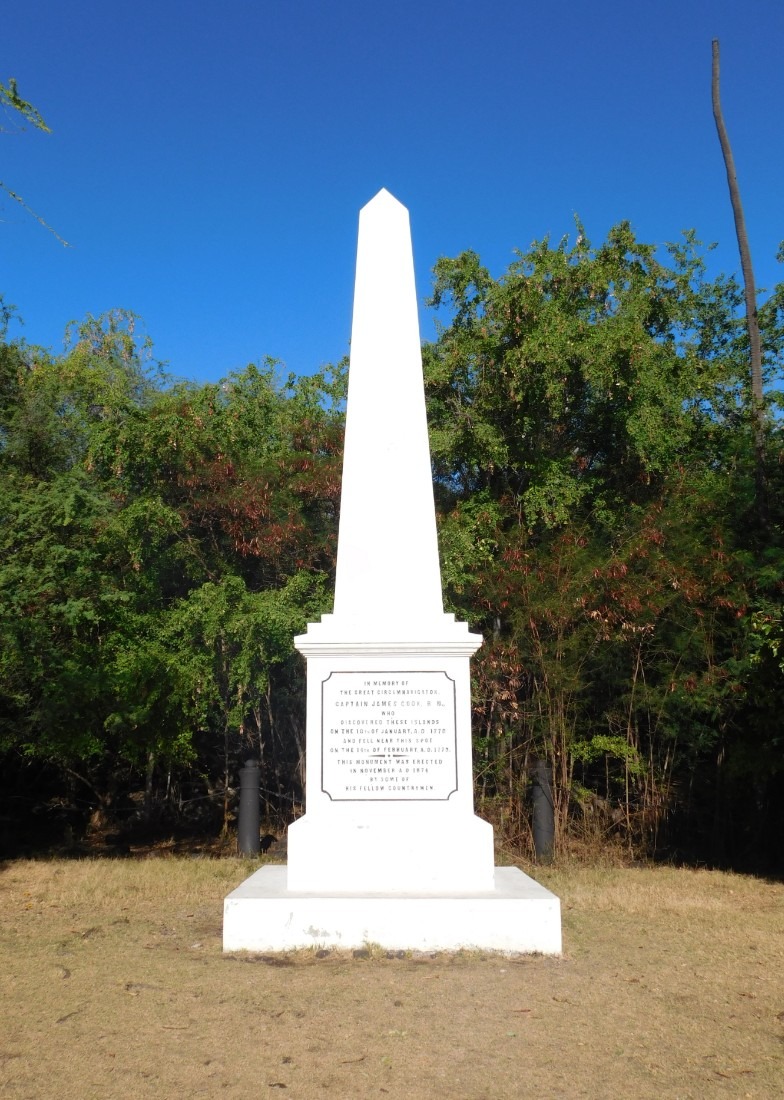 Almost immediately we saw a pod of dolphins slowly making their way towards us. I didn’t know why at the time but I wasn’t quite ready to jump in the water with them yet, although looking back I think I was scared.

Scared that after all the years of build-up and anticipation, that the experience wouldn’t live up to my high expectations.

The dolphins jumped out of the water, spinning and playing in the cool morning air. They circled close to shore and I could hear every breath blown out of their blowholes. After a while they started making their way back to the open ocean, I watched them till I could no longer make them out in the distance.

I promised myself that when they came back around again I would jump in the water and swim out to them. No more excuses. 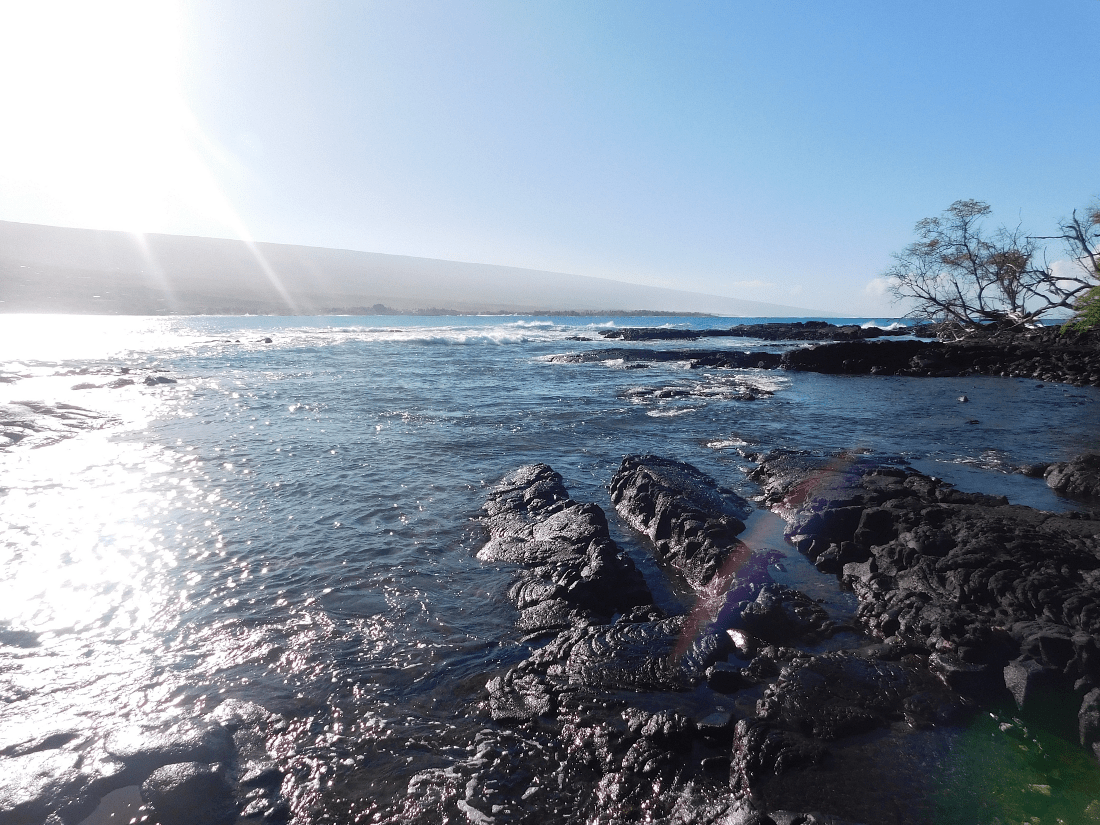 We snorkeled off the jetty, enjoying the colorful fish, and being in the cool water. But there was no sign of the dolphins, and I was kicking myself for not getting in with them when I had the chance. Had I screwed up and missed the chance of a lifetime?

And then they were back. This time I didn’t hesitate. Toby was already in the water, so I grabbed my snorkel and mask and joined him. As soon as I was in, I swam directly out, hoping like hell that they would hang around.

They did. And the next twenty minutes were some of the most magical of my life. 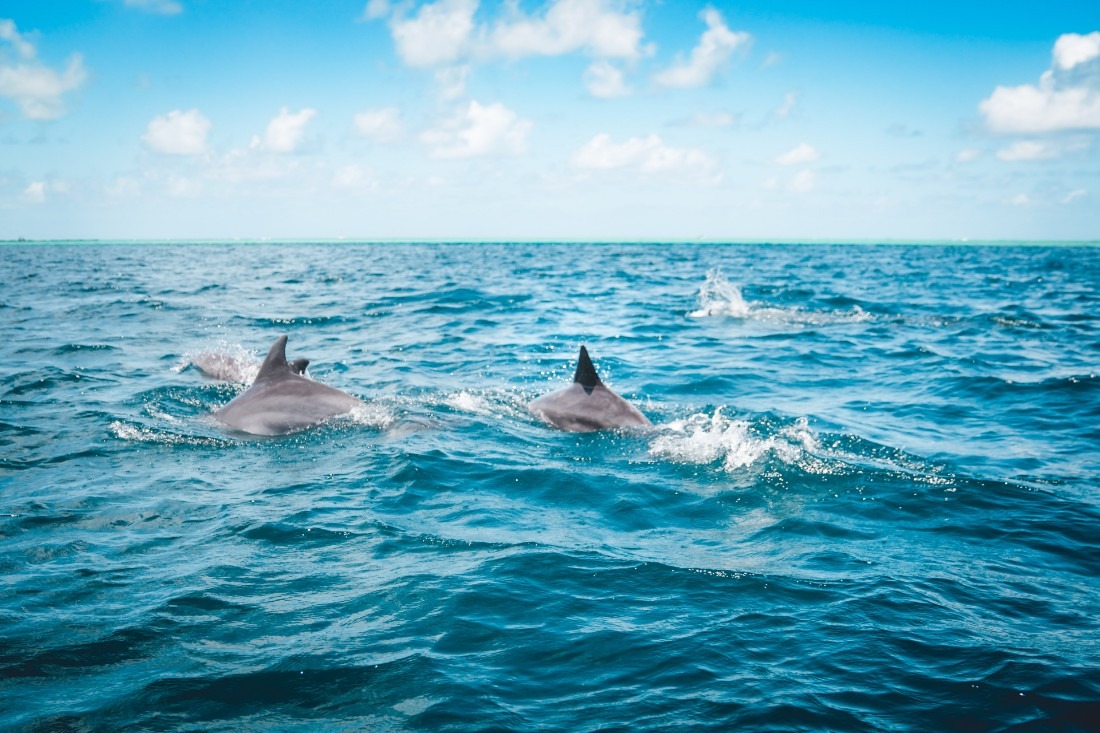 Swimming with Dolphins on the Big Island

I was finally doing it, swimming with dolphins!

The conditions were perfect. Shining sun, clear turquoise water, only a handful of people. It was worth the wait.

The pod was about 15 dolphins large and they seemed as interested in us as we were in them. They circled us lazily on the surface, the only sounds were dolphin blows and human joy. Underwater they played, swimming in perfectly synchronized displays, beside us and under us. All around us.

I couldn’t stop laughing and crying from pure happiness. This is what it felt like to have the biggest dream of my life come true.

After a while, they started heading out of the bay, so I swam back to shore. They came back later but I was content just watching them this time. I had the incredible experience I’d always dreamt about and I was still basking in it. 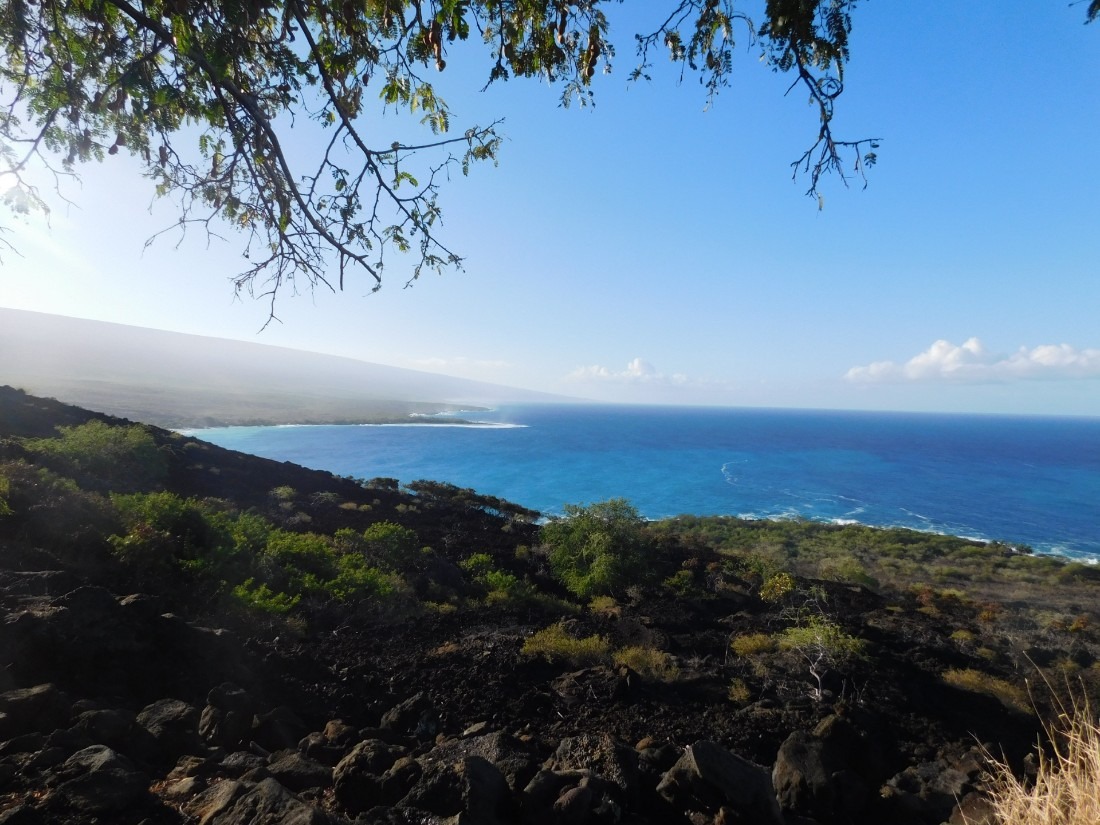 The hike out was certainly harder in the heat and with the relentless uphill, but the dolphins were on my mind the whole time, which made it much easier.

One of my biggest dreams had come true, and it was even better than I could have imagined it to be. I will never forget it.

How to Hike the Captain Cook Monument Trail

Getting to the Captain Cook Monument (Ka’Awaloa) Trail

The Ka’Awaloa Trail starts on Napoopoo Road in the town of Captain Cook. It is just down from the intersection with the Mamalahoa Highway – you can find it on Google Maps.

There is limited parking at the trailhead, or if you don’t have a vehicle, you can catch a bus – check the bus timetables on the Hele-On website.

Another option is to hitchhike, it is very common and safe to do on the Big Island – this is how we got to the trailhead.

Intermediate. It isn’t a difficult hike, apart from the heat on the return leg. Make sure to bring at least two liters of water, if not more, because you will need it! Also, make sure to wear proper footwear – flip flops ain’t going to cut it.

Tips for Swimming with Dolphins in Kona

What to Pack for the Captain Cook Monument Trail

For day hikes, the Cotopaxi Luzon is an awesome backpack choice and is lightweight and will pack down easily when you’re not using it.

I highly recommend taking a CamelBak with at least 3 liters capacity because there are no water sources on the trail and you will need to drink ALOT of water on the hot hike back out – believe me, take more than you think you will need. Take some trekking poles to help with the downhill – your knees will thank you!

Also, pack a raincoat in case it rains, and if you are hiking in winter and are starting early, take a lightweight but cozy thermal underlayer top.

Where to Stay Near the Captain Cook Monument Trail

For the largest range of accommodation options, the town of Kailua-Kona is going to be your best and closest option to the Captain Cook Monument trail. It is about a twenty-minute drive from Kailua to the beginning of the trail.

In Captain Cook itself, a good option is the historic Manago Hotel, which offers simple rooms and has a restaurant on site that serves up Hawaiian classics like garlic shrimp and Teri chicken.

For budget options in Kailua-Kona, Kona Beach Hostel is a good option with dorm rooms and private rooms, and it’s right by the beach south of town.

I have heard that My Hawaii Hostel is a great budget choice too, with friendly staff and a great location next to the beach south of Kailua-Kona, which is closer to Captain Cook.

There are also a number of apartments and rooms to rent through Airbnb in and around Kailua-Kona and Captain Cook/Honaunau.

Here are my top picks for the Kailua-Kona area:

Ocean View Cottage on a Coffee Farm: A beautiful little one-bedroom cottage on a working coffee farm. Located between Kailua-Kona town and the best beaches on the island in South Kohala.

Paradise Cove at Ali’i Cove: This beautiful two-bedroom apartment is walking distance to Kailua-Kona town and across the road from the beach. It has a balcony with a gas BBQ and a partial sea view.

Kona Makai Apartment: A one-bedroom condo in a quiet complex close to the beach and Kailua-Kona town. The complex has a pool, spa, tennis courts, and gym.

KJ’s Creative Cottage: This studio cottage is a relaxing mountain retreat surrounded by nature, but is only 15 minutes from Kailua-Kona.

If you haven’t used Airbnb before – use my link to sign up and get $50 off your first stay!

There are so many choices for great hotels in Kailua Kona, from super luxurious through to more basic offerings. Check out Agoda to see what is available for stay.

The Best Insurance for Your Big Island Trip

Make sure you get travel and health insurance before your trip. Safety Wing is my go-to and they are cheap and easy to claim with – it auto-renews every month unless you turn it off so you don’t have to think about it on longer trips. 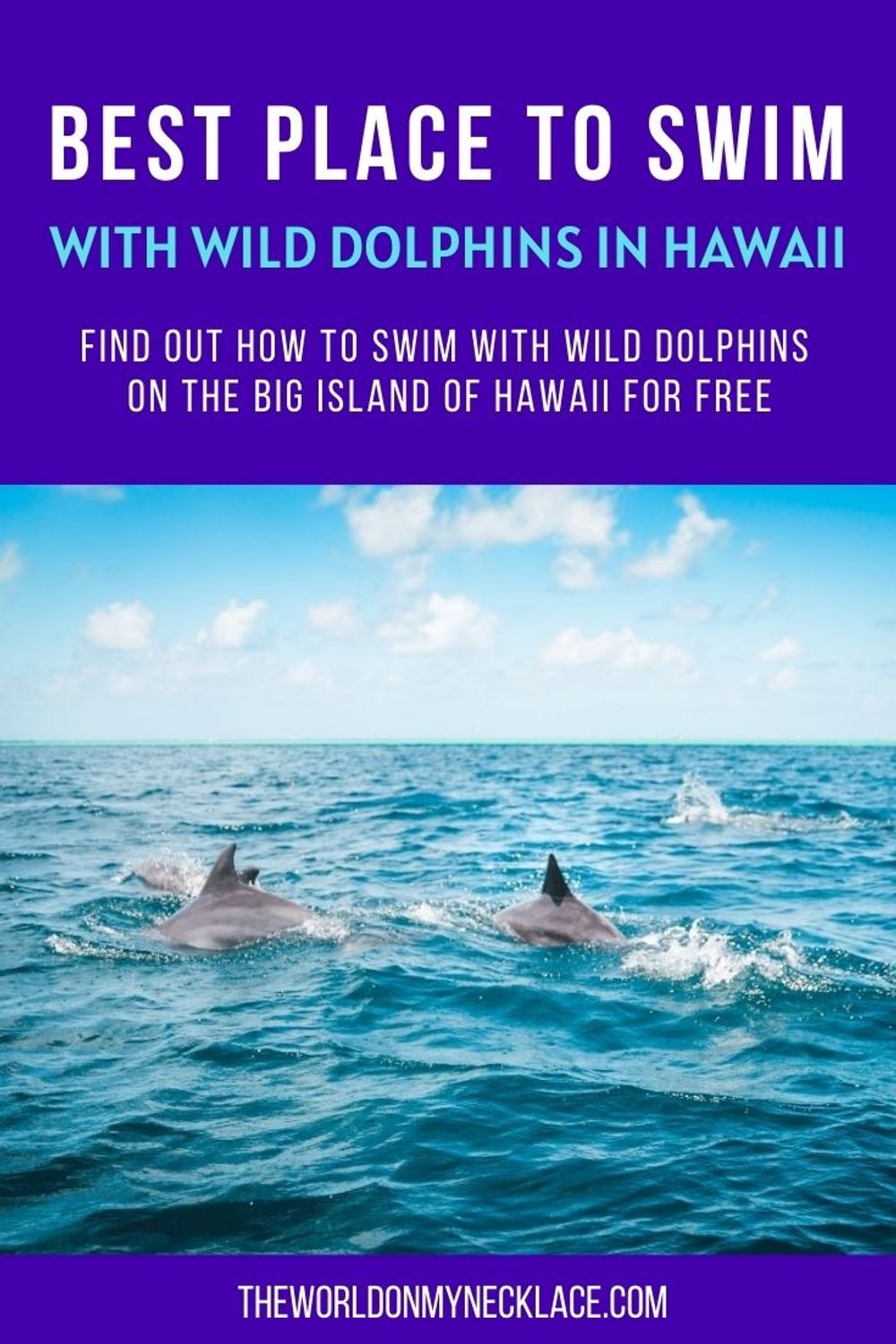 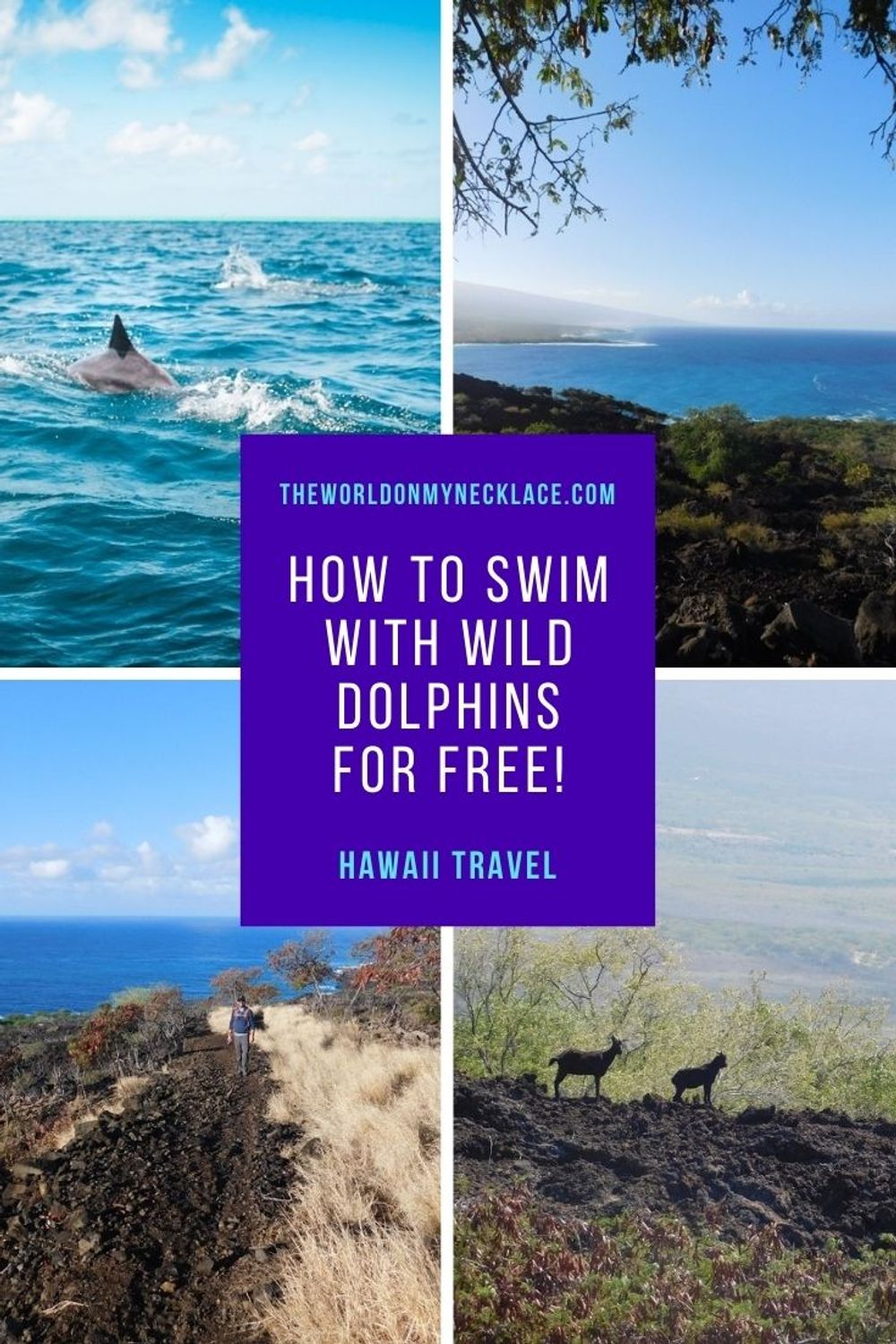 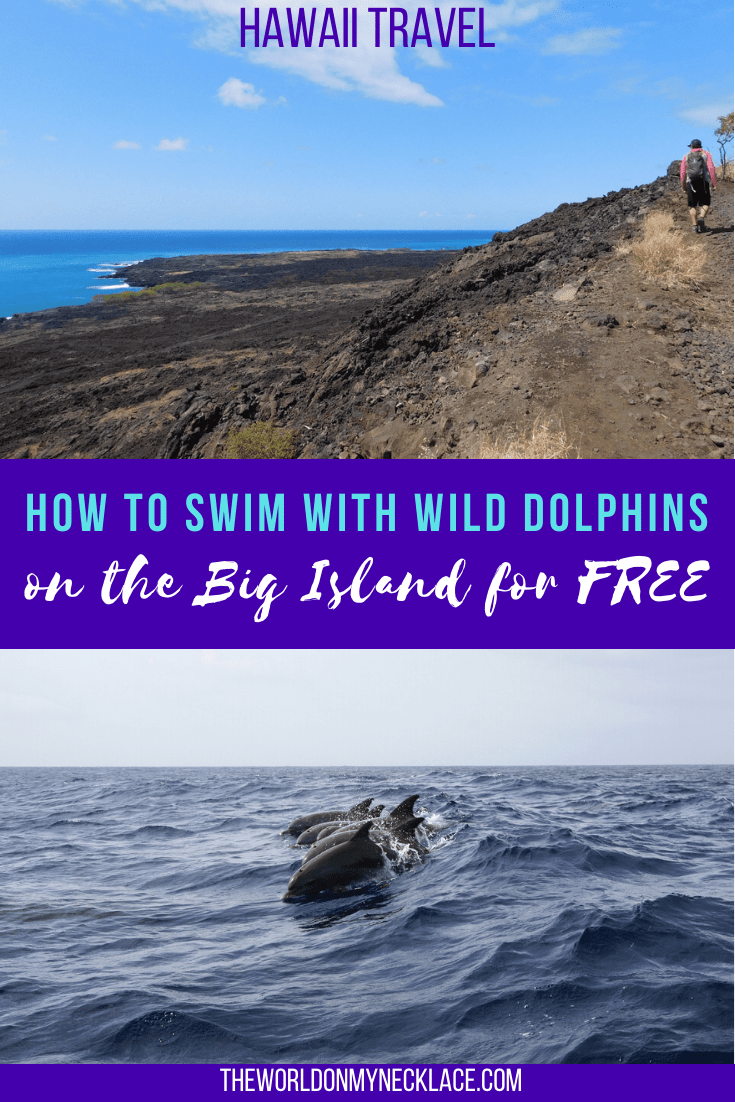