Australia, Hikes & Walks
This post may contain affiliate links. If you make a purchase through an affiliate link, I will earn a commission at no extra cost to you. Thanks for your support. 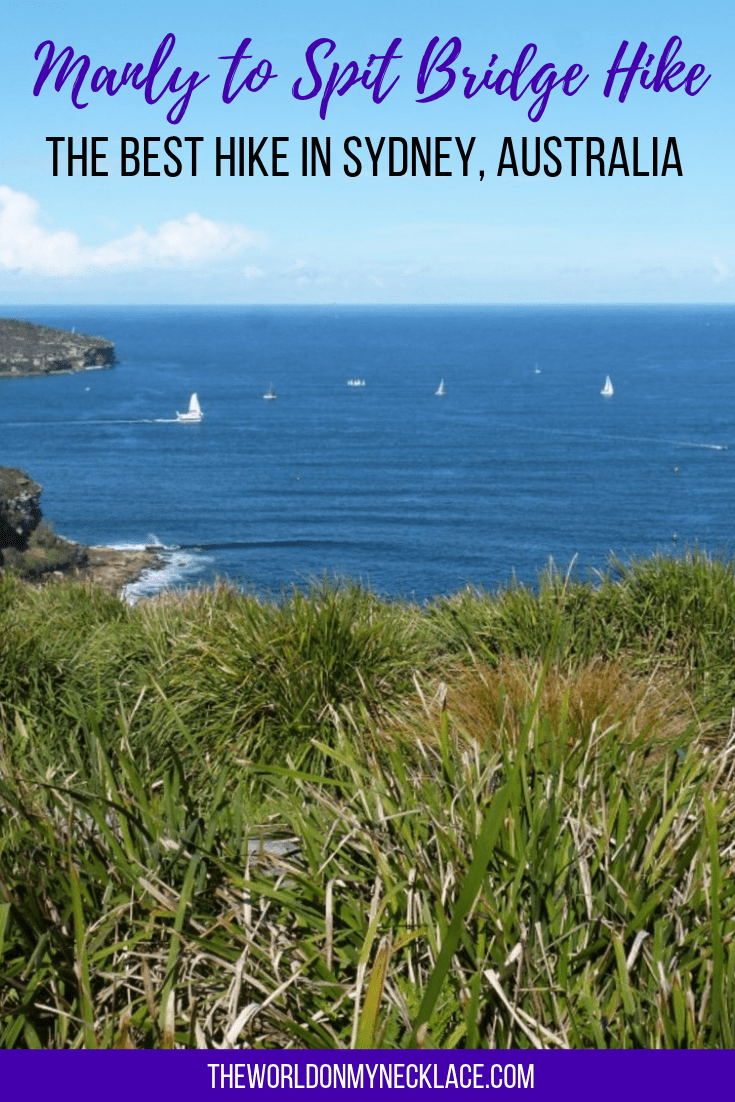 Sydney may not be mountainous but there is still some really good hiking to be had here. In particular, coastal hiking. And what better way to really experience Sydney’s world famous coastline than by walking it. It’s an essential part of any Sydney Itinerary in my opinion.

Probably the most famous of Sydney’s coastal walks is the iconic Bondi to Coogee walk on Sydney’s eastern beaches. We were lucky enough to live right by the beach in Coogee for two months of last summer and walked at least short sections of this gem of a hike nearly every day.

But because of its popularity, it is heinously busy most of the time.

Friends told me about another beautiful Sydney coastal walk, the Manly to Spit walk, this time following a 10km section of Sydney’s gorgeous harbour from the seaside suburb of Manly, through to the Spit Bridge which connects North Sydney and the Northern beaches. 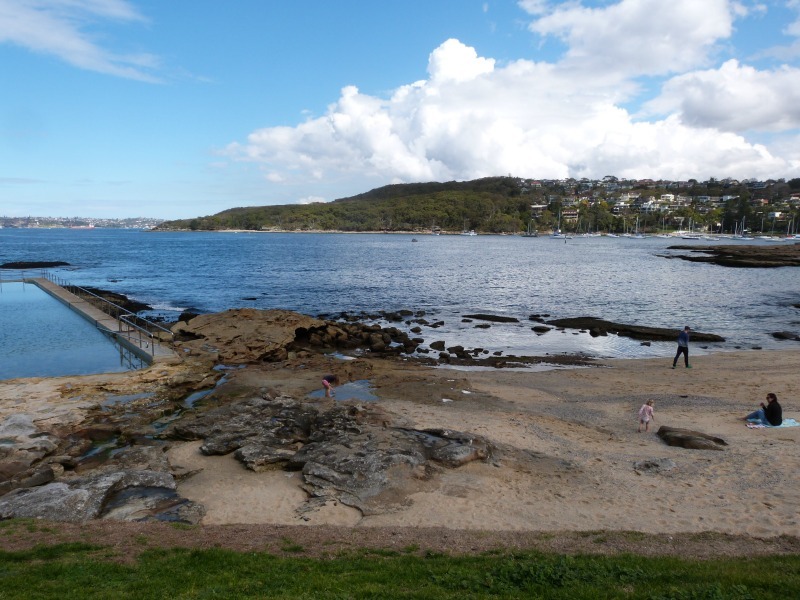 I hadn’t even heard of this walk before, which I figured is a good thing, because hopefully that would mean that other people hadn’t heard of it either.

Now that I have moved to the Manly area, I finally experienced this spectacular trail for myself last month, on a beautifully sunny day in late winter. 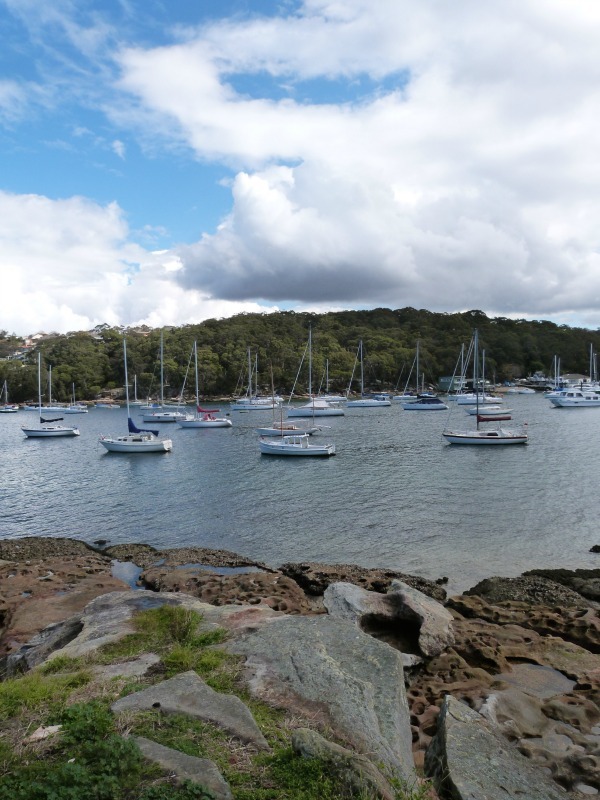 Hiking the Manly to Spit Walk

The walk begins at the Manly ferry terminal. Walking west along the path above a small beach and around the Manly Sealife Aquarium I reached Federation Point.

There used to be a small colony of Little Penguins living here, until a dog wiped them out a few years ago. Very sad. This is why the Penguin Wardens are so important here, a position I was lucky enough to hold for a season. 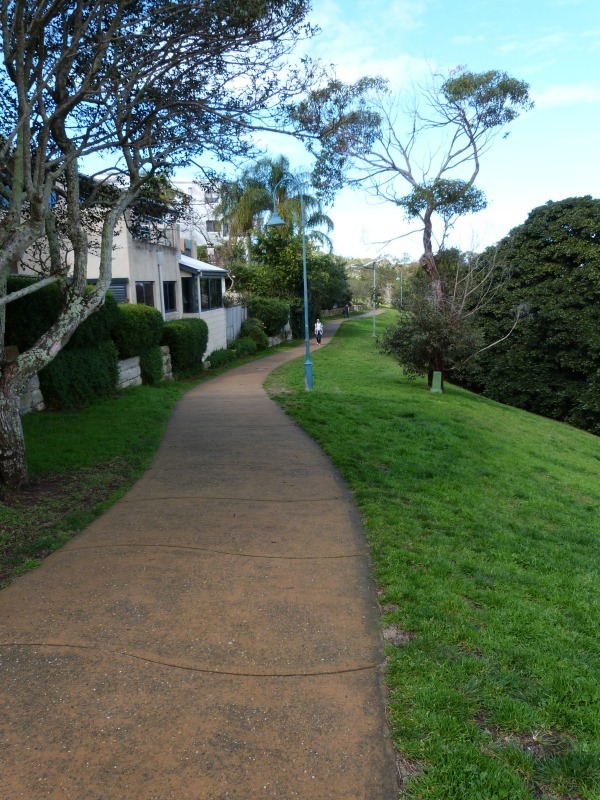 Continuing along the coastal path, spectacular views unfold of the harbour entrance and its magnificent cliffs. Past the small rocky Delwood beach and the Fairlight Tidal pool, the path meanders for about another 500 metres above the ocean before entering a cool section of the path shaded by large trees and ferns. 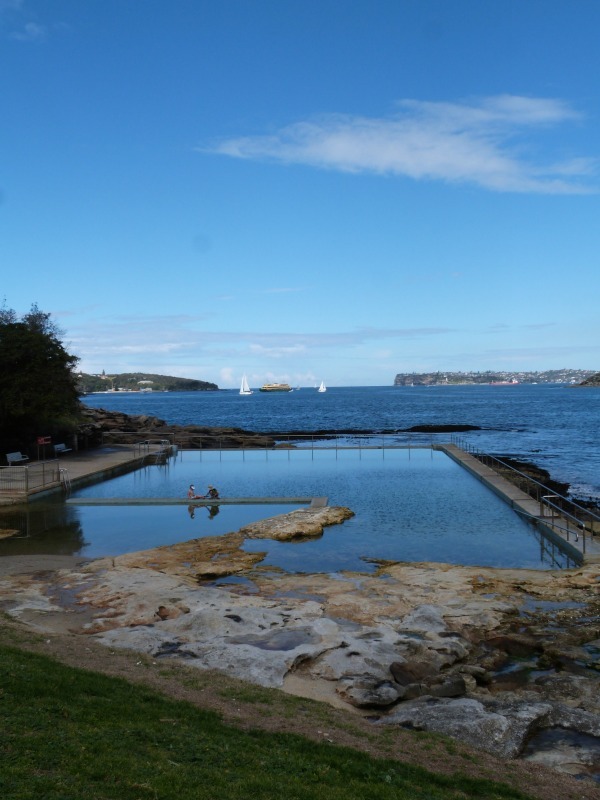 There are glimpses of the harbour through the dense vegetation. Boats bob in the sheltered waters. Kookaburras laugh loudly in the trees above. 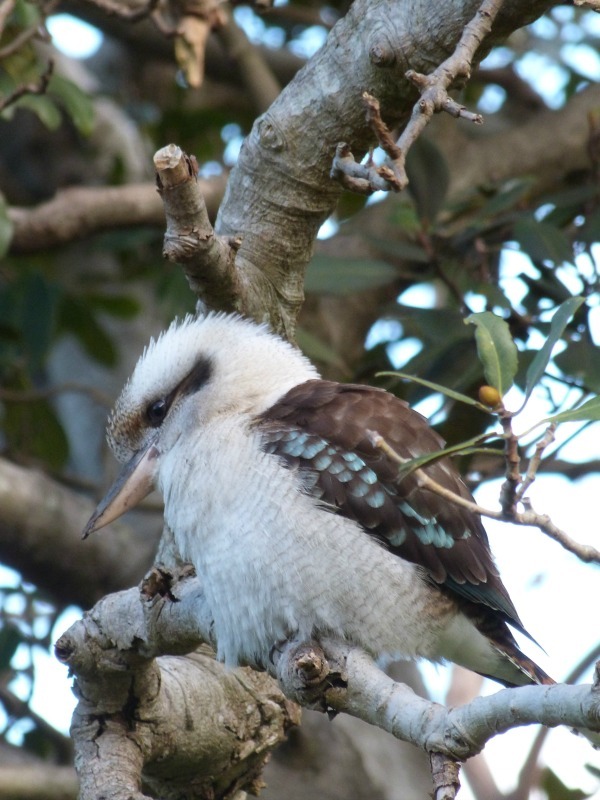 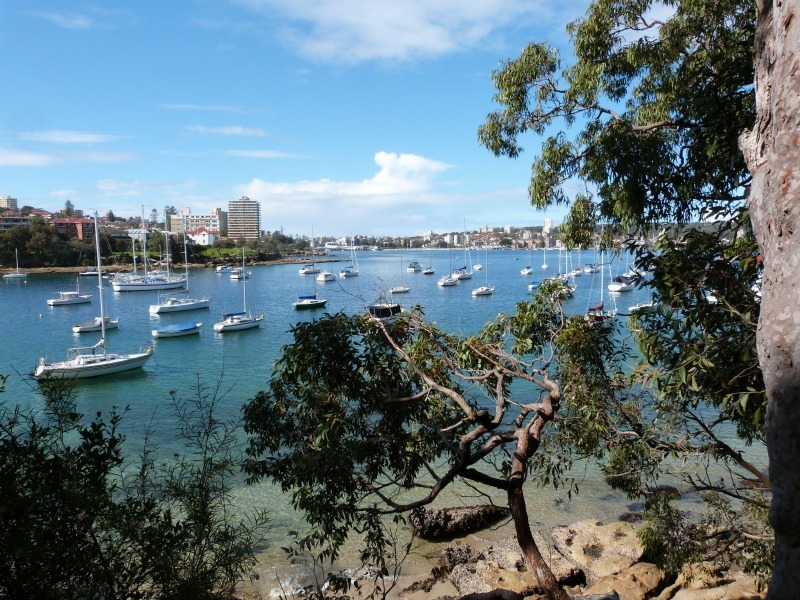 Emerging from the shade of the trees, I reached the grassy expanse of the North Harbour Reserve, a large park where there were kids running around while their parents BBQ’d.

Picnic blankets were spread on the grass. Frisbees sailed through the sky. A popular family spot. 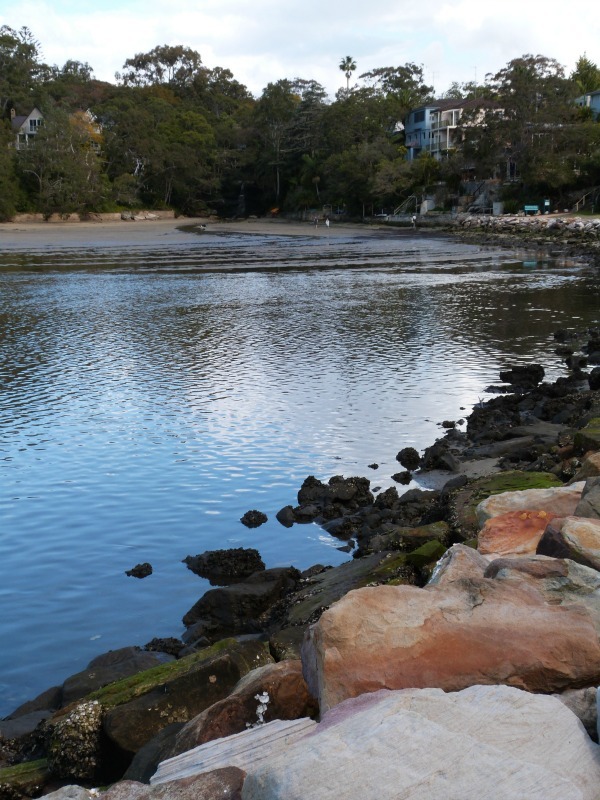 Rounding this small harbour, I crossed over the sluggish grey sands of the estuary at low tide, and past a waterfall flowing into the harbour basin. 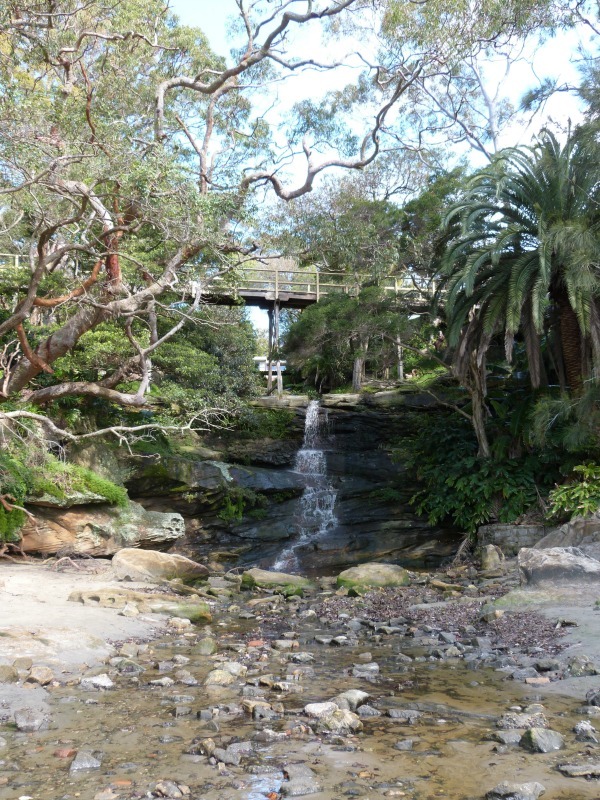 Walking along the rocks, I passed the Davis Marina before continuing on the path through the native bush of the Wellings Reserve, before emerging at the ocean pool and rocky sands of Forty Baskets beach. 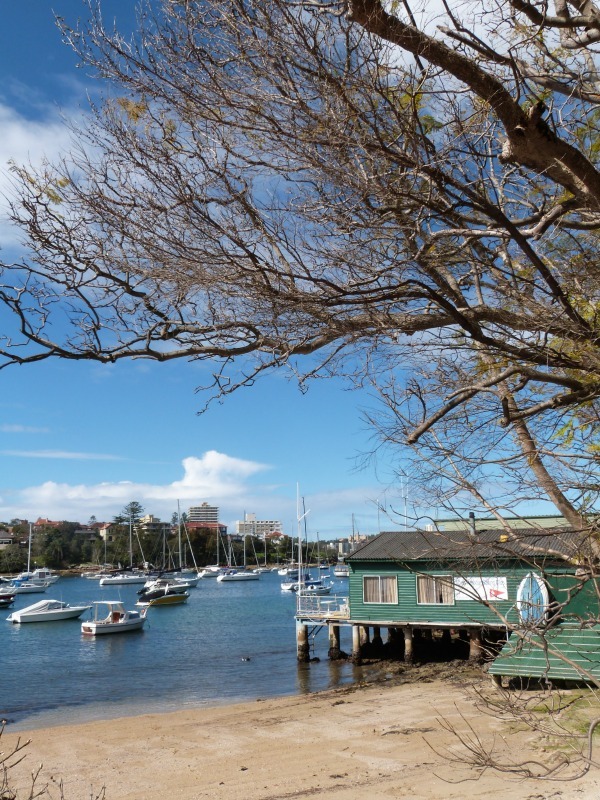 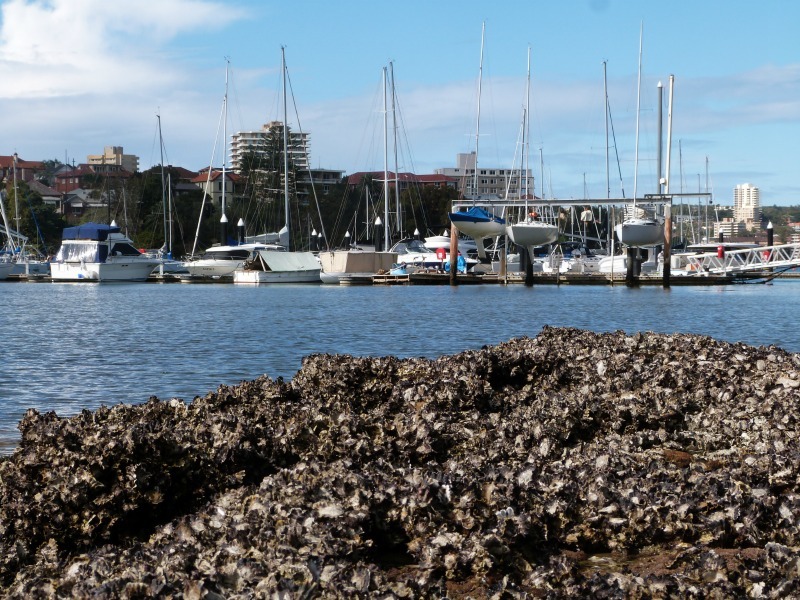 After walking along the beach and around the rocks, I re-joined the path and entering the grounds of Sydney Harbour National Park. Another beautiful beach, Reef Beach, came into view after a couple of minutes. 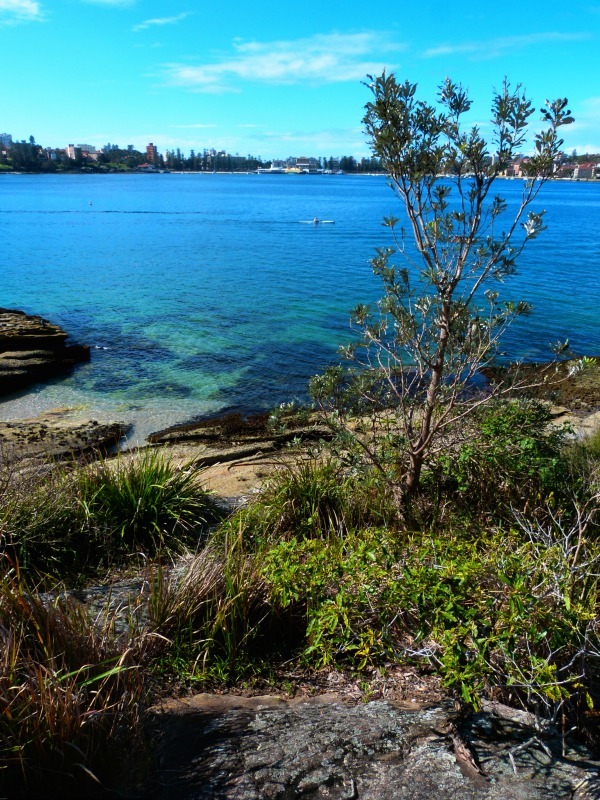 I sat for a while on the soft yellow sand, enjoying the warm sun on my face and watching people paddle boarding and fishing off the rocks.

There were ships sailing in the harbor and it felt like summer. I resisted the urge to stay there all day. 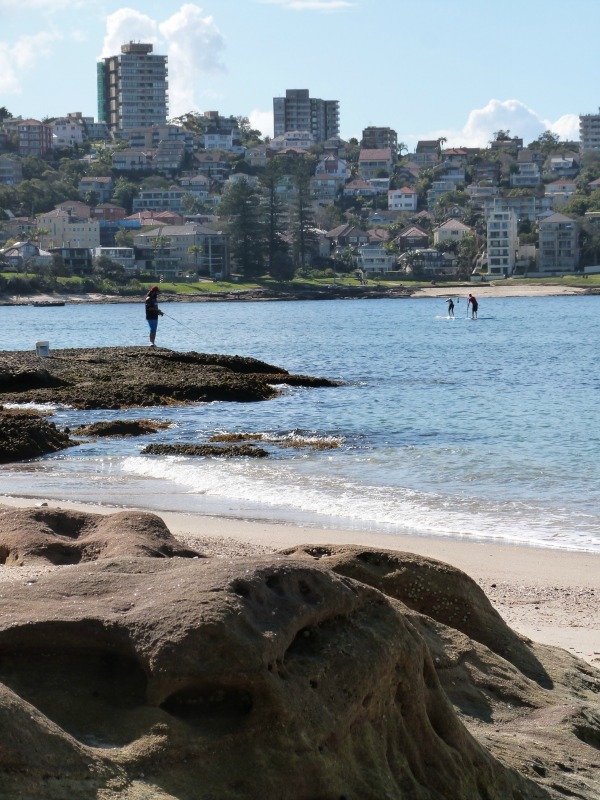 After my rest I continued on, the trail started winding its way to the top of the rugged headland, affording incredible views over the harbour entrance and the sparkling sea. 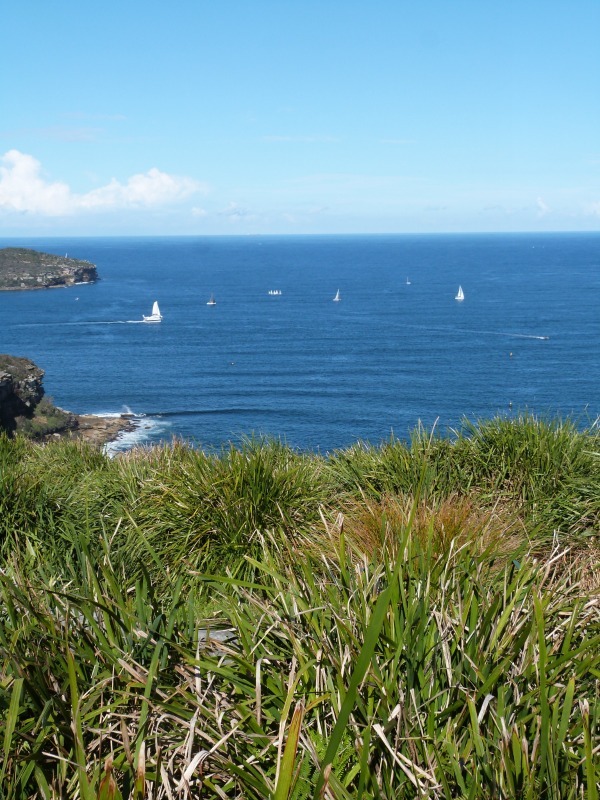 The trail was harder going than I thought it would be. I reached a lookout where I stopped to recharge and admire the commanding harbour views.

Fishermen cast their lines off the rocky coastline below. I wondered how they had gotten down there.

Back on the path, it continued its slow ascent up the headland, twisting and turning. Finally I reached the top and sat at the Crater Cove lookout, exhausted. I noticed some old wooden buildings sitting on the edge of the cliffs, far below.

There was no path down to them that I could see but I saw a couple of people sitting down there. It looked like a small abandoned village and when I looked online later, I found out that there was a small community living there up until the 1980’s when they were evicted by the National Parks Service.

There is a hidden path to get there and now I know about it, I will certainly be visiting these old fishing huts soon. 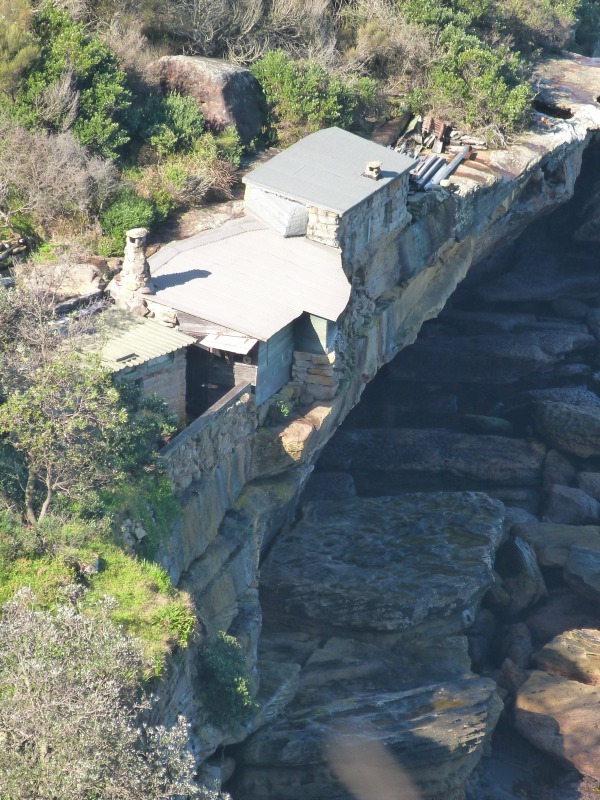 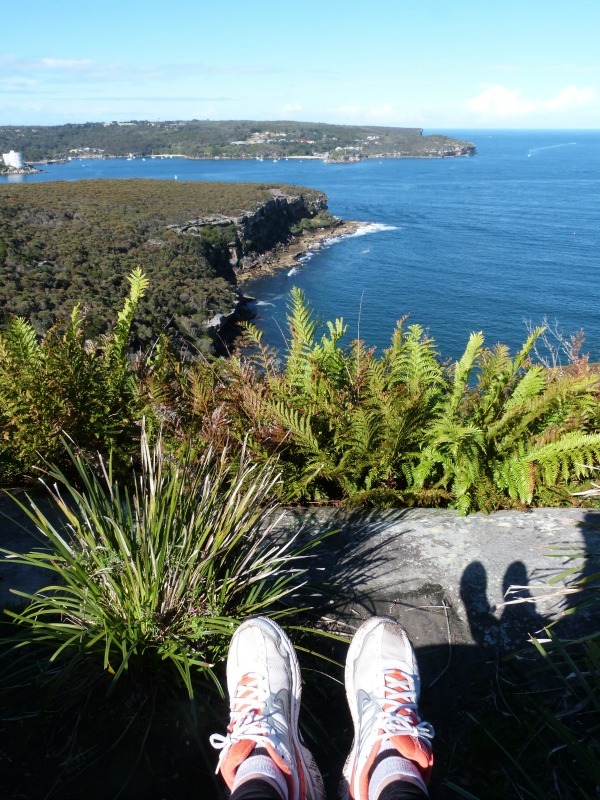 The trail flattened out as it headed back into the cover of the bush. The path was lined with bushes sprouting small and colourful wildflowers. A wild turkey ran in front of me. 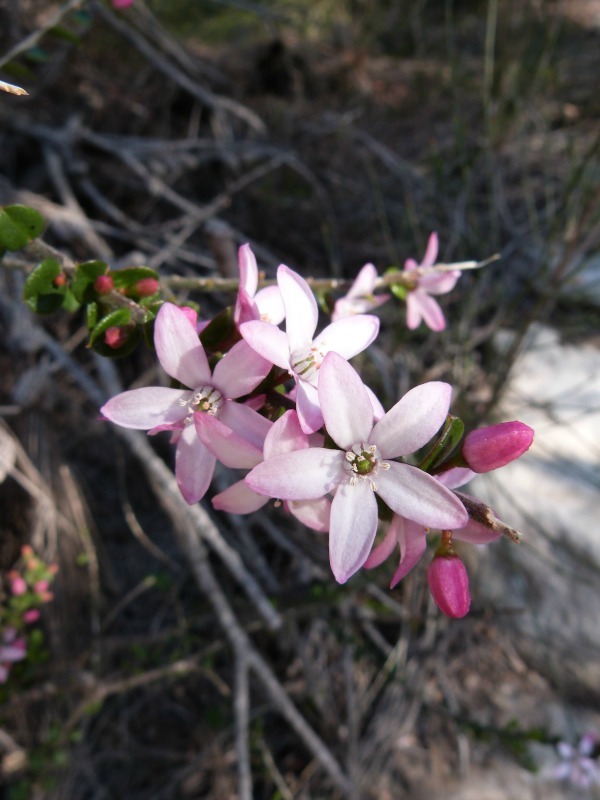 The path began its long, slow descent. I took a short side path to a small beach. Rivulets of water from a small creek trickled over the flat rocks and into the sea. 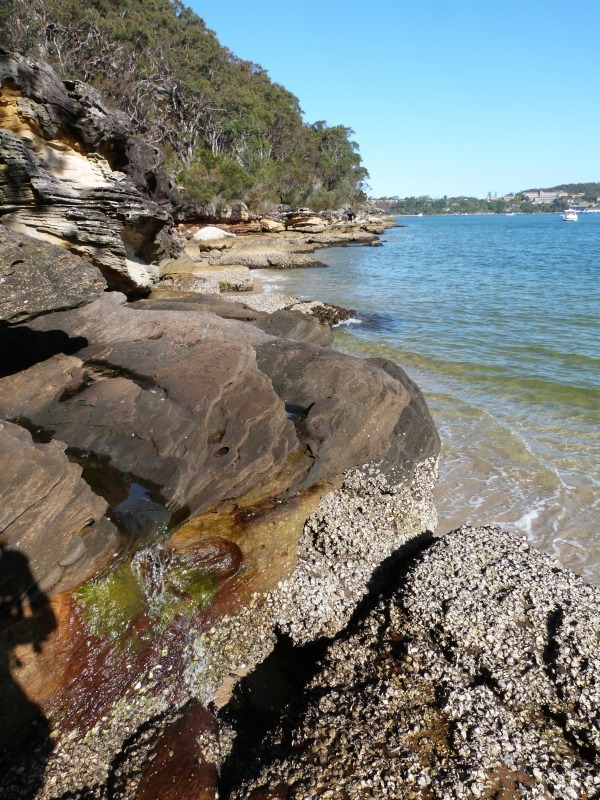 Stone stairs lead up from the beach beside a sheer cliff face. Thin streams of water trickled down the rock wall. Thick vegetation made the air cool and damp and made me shiver. 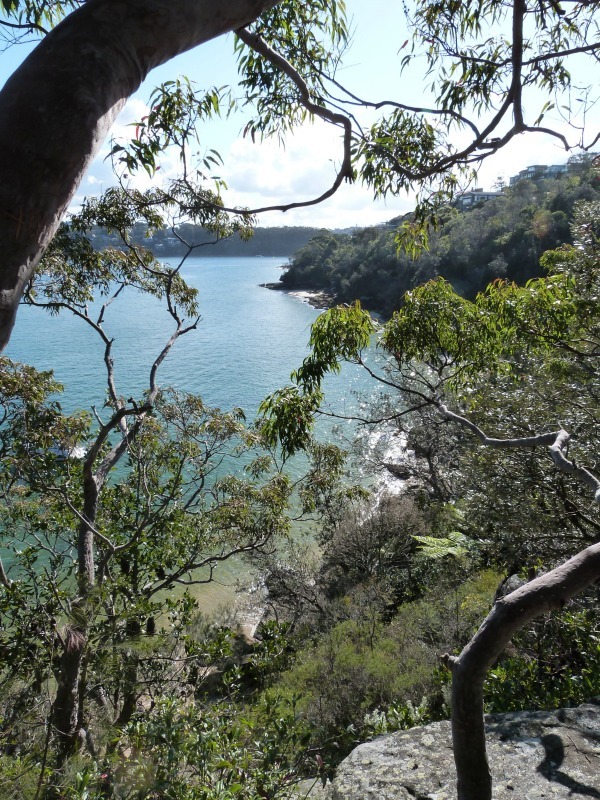 Further along there was another beautiful beach, this one larger and with a gushing waterfall falling to the sands below. A large group of kids shattered the peace with their hollering. I didn’t linger long. 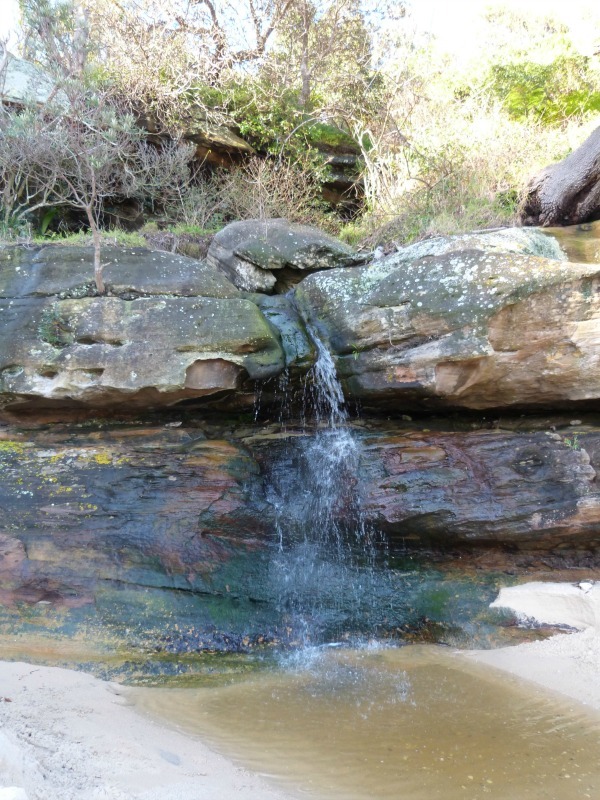 I stopped at the cliff top Grotto Point Aborigine engravings. Outlines of animals and humans are carved into the sandstone, some were too worn for me to make out what they were but I did see a couple of shapes that I think were fish. 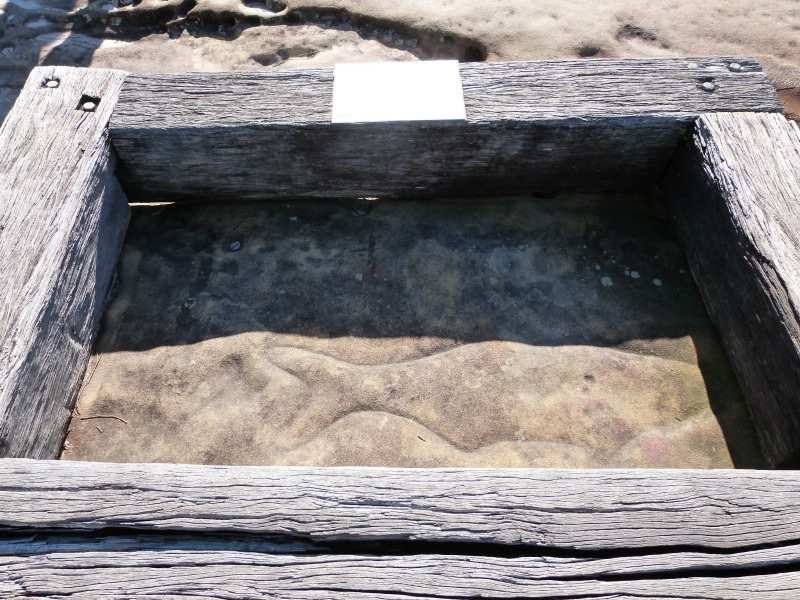 Steps led me down the last descent to sea level, where I exited the sun choked shade of the forest and onto the shimmering sands of Clontarf beach, a long narrow strip of sand with houses lining it.

Walking along the beach with the sun in my eyes, it felt good to be back in the sunshine. 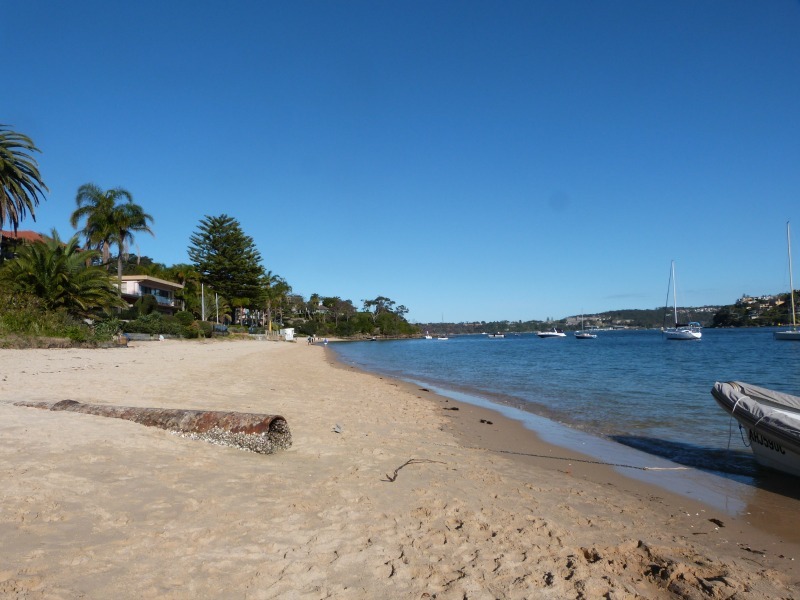 At the end of Clontarf beach, it opens up into Sandy Bay where there is a large park and a playground. I walked along the grassy fringe of the beach between kids building sandcastles and families picnicking on the grass. 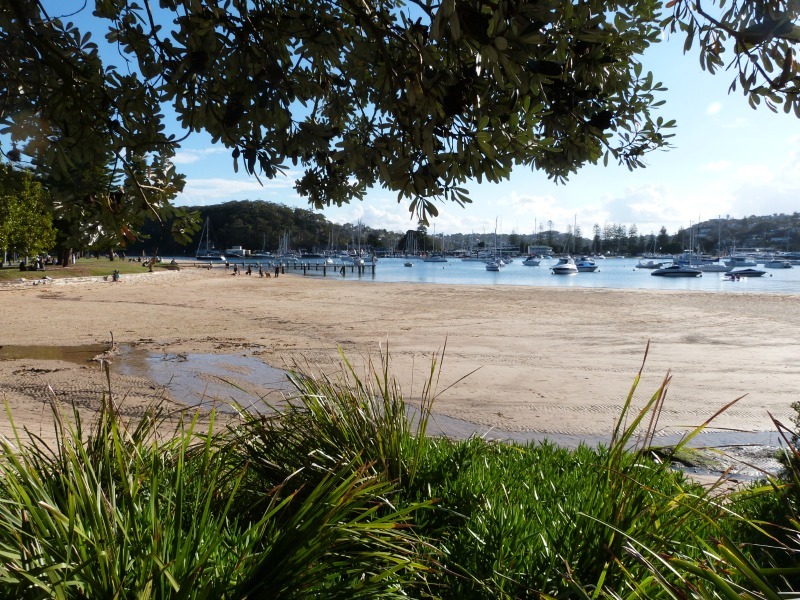 The path leaves the park and loops around the bay then back into the bush and along a sheltered pathway. I crossed over a wooden bridge and passed a small waterfall and then I was at the Spit Bridge. 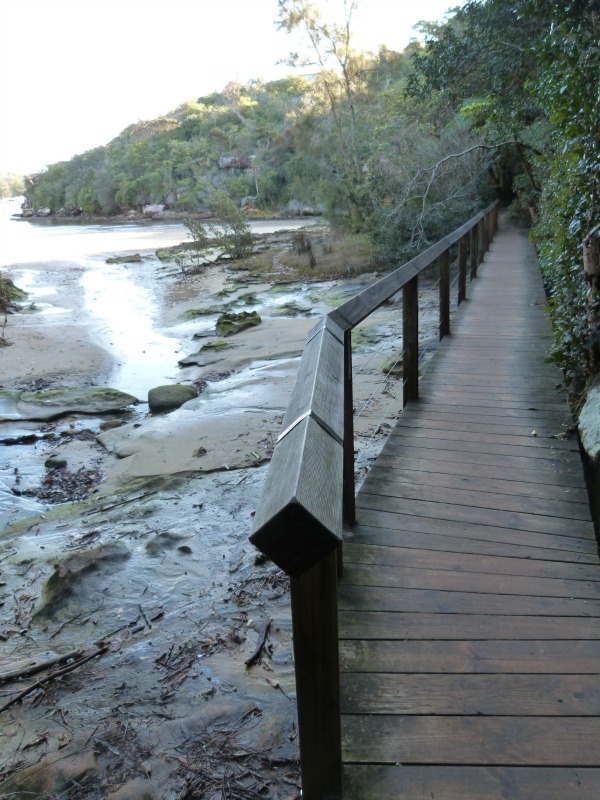 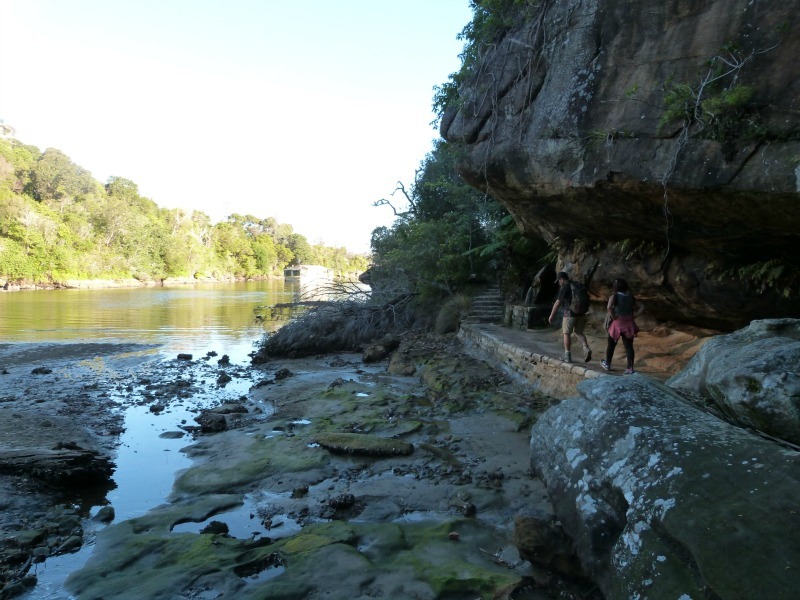 I had finally reached the end, 10km and 3 hours after I had started hiking back in Manly.

The Verdict: How was the Manly to Spit Walk?

It was a spectacular hike and although not as crowded as the Bondi to Coogee walk, it was still popular. For almost the entire hike there were spectacular water views and I loved the hidden beaches of the National Park. The Manly to Spit walk is definitely one of the best walks in Sydney.

It may not be my beloved alpine hiking, but the Manly to Spit walk sure was beautiful.

How to Hike the Manly to Spit Walk

Getting to the Manly to Spit Walk

You can start at either end of the Manly to Spit Walk. The best way to get to the Spit Bridge if you don’t have a car is by bus, you can use the Transport NSW Trip Planner to find out which bus to take.

To get to Manly, I highly recommend taking the ferry. It is the fastest way to get back to the city and it is definitely the most scenic. If you do the hike on a Sunday, the ferry is drastically reduced in price if you have an Opal card – all Sunday travel is $2.70 per trip!

Difficulty of the Manly to Spit Walk

Easy/Intermediate. The hike does have a couple of uphill slogs but they aren’t bad – especially if you walk and hike a lot.

Length of the Manly to Spit Walk 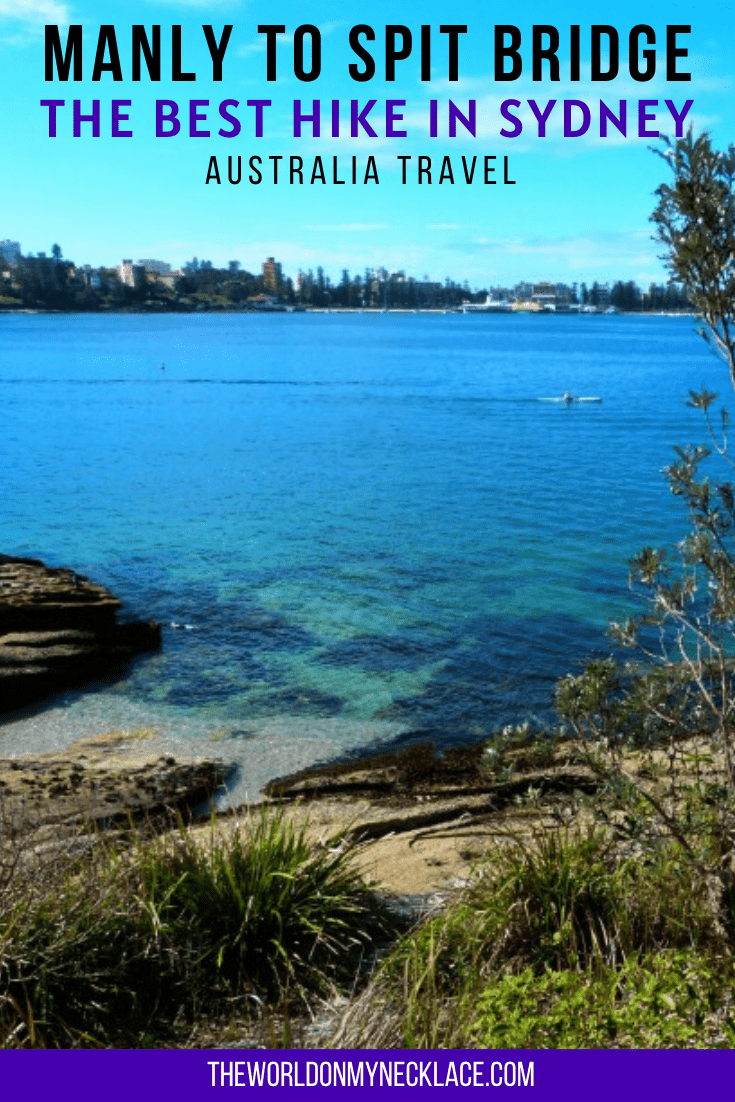 10 Comments on Manly to Spit Walk: The Best Hike in Sydney