Thailand
This post may contain affiliate links. If you make a purchase through an affiliate link, I will earn a commission at no extra cost to you. Thanks for your support. 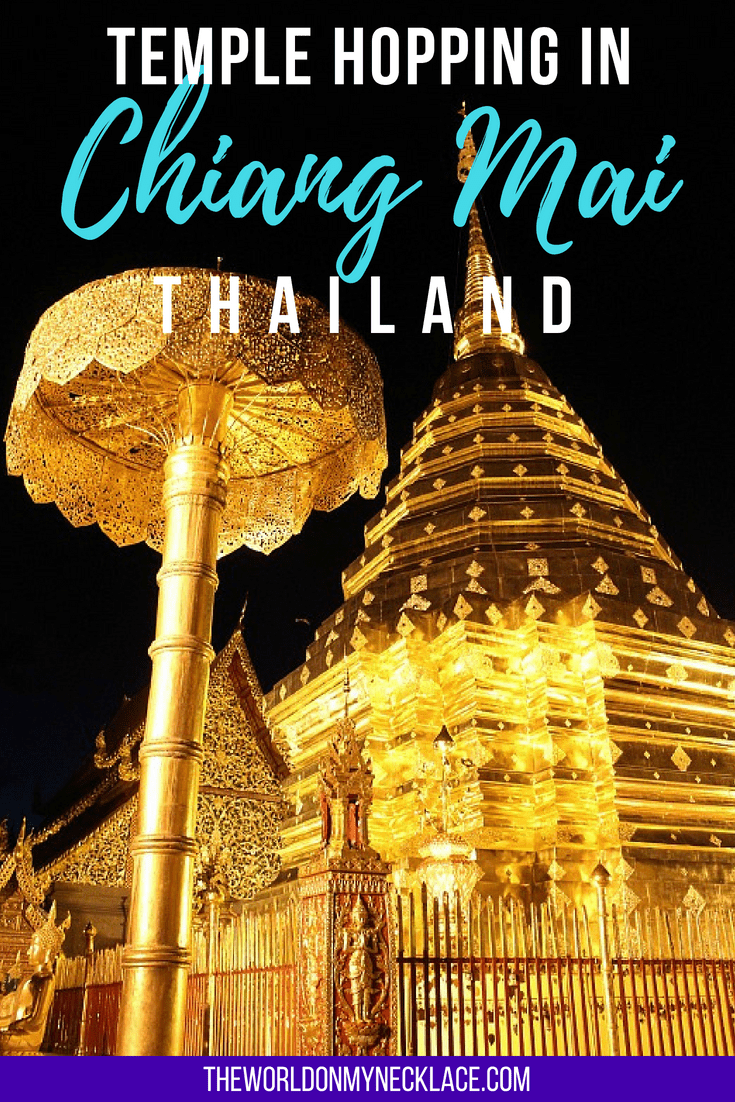 Chiang Mai, Thailand. My first foray into the land of smiles. The land of Pad Thai and drunken Brit backpackers on Gap years. Lady boys and thatched roof bungalows on tropical island beaches. Of Buddhist temples and thick green jungle.

A land I had been yearning to visit for a long time but at the relatively ripe old age of 33, was yet to do so. Chiang Mai was going to be my introduction.

It felt like everyone I knew had been there except me. Considering how much I travel, people assumed I had visited Thailand and were always shocked to find out that I hadn’t.

The fact that I hadn’t been there yet almost made me feel like I was failing as a traveler, so it was the first country on my list for my three month South East Asia trip.

I was finally making it there and man was I excited! 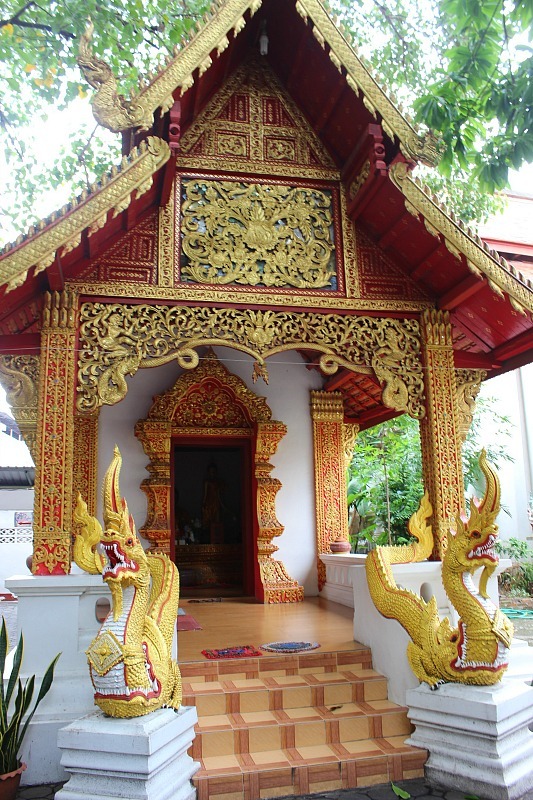 After a short one night stopover in Singapore, my third visit, and a couple of hours at the airport in Bangkok, my friend Kerry and I arrived jet lagged and bleary eyed in the northern capital of the country, Chiang Mai.

Chiang Mai is both the largest and most culturally significant city in Northern Thailand. Founded in 1296, Chiang Mai was the capital of the Lan Na Kingdom for almost 500 years.

The city is a cultural melting pot with over 300 Buddhist temples – some of the most beautiful temples in Thailand, numerous festivals and a thriving food scene.

And with it’s cheap prices it is no wonder that it attracts such a large number of creatives and digital nomads from around the world. In particular, a large amount of travel bloggers base themselves here.

The fact that it is a beautiful and photogenic city helps too. 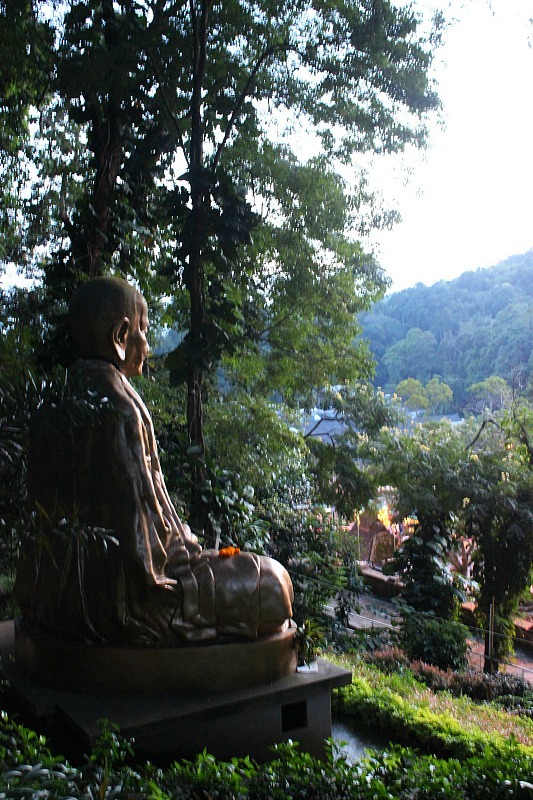 The beginning of my month in Thailand began with extreme tiredness and a stressful hour of driving around in the middle of the night, while our taxi driver tried to find our guesthouse in the maze of alleyways that make up the old city of Chiang Mai.

After asking numerous people for directions, the sign for our guesthouse finally came into view and we sighed with relief that a comfy bed and blessed sleep were close to hand.

Waking up refreshed on our first morning in the city, a delicious breakfast of sticky rice with custard, tropical fruits, juices, coffee and cereal was laid out for us in the quiet guesthouse garden. This was the introduction to a beautiful couple of days of eating very well.

Because I didn’t, I missed out on trying a lot of very tasty sounding food. But I ate very well anyway.

From the street stalls serving the best mango sticky rice I have ever tasted and skewers of juicy marinated chicken, the small restaurants tucked away around the old city with zesty soups and incredible pad thai, to the mind-blowing fruit smoothies that are found all over the city, Chiang Mai consistently offered incredible eats.

On my last night in Chiang Mai, Kerry and I headed to the big weekly Chiang Mai Night Market located within the old city walls. I had arranged to meet an online blogger friend, Karyn from The Lost Lemurian, there.

After arriving at our meeting point a half hour late due to our taxi driver dropping us at the wrong end of the market and then having to push through the crowds to reach the correct end, the rest of the evening was a lot less stressful as we wandered the busy market packed with myriad delicious and cheap food options and local crafts.

Karyn made a video of the night if you want to take a look. I love markets and this was a great one.

Along with the outstanding food, Chiang Mai charmed me with it’s quiet sois (alleyways) that hid numerous delights such as leafy gardens, small parks, peaceful guesthouses and cafes, and crumbling temples. 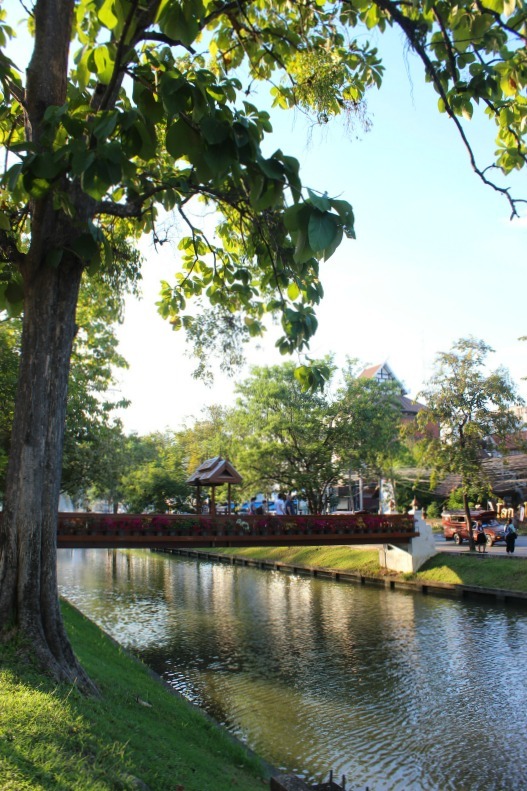 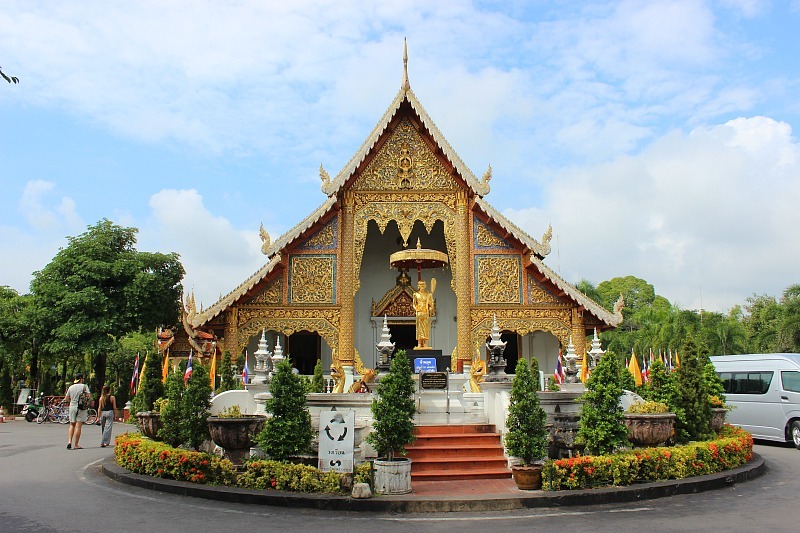 The old town is surrounded by a moat and the remains of a red brick city wall that was built 700 years ago. Most of our short time in Chiang Mai was focused in the Old town and it was the perfect place to just wander aimlessly.

I had never had a Thai massage before, preferring to wait until my arrival in Thailand rather than have a possibly inauthentic experience outside the country.

After a busy morning walking around the numerous temples in the sweltering heat, Chiang Mai seemed the perfect place to finally indulge.

We picked an unassuming place on one of the quiet sois with a calming white interior. The ever smiling masseuse started by washing my feet before leading me into a room to change into a robe.

The next hour was a mixture of ecstasy and agony as my whole body was twisted, kneaded and pounded. At times it was almost unbearable and by the end of the hour I was feeling exhausted but incredibly relaxed. Overall it was a great first Thai massage experience. 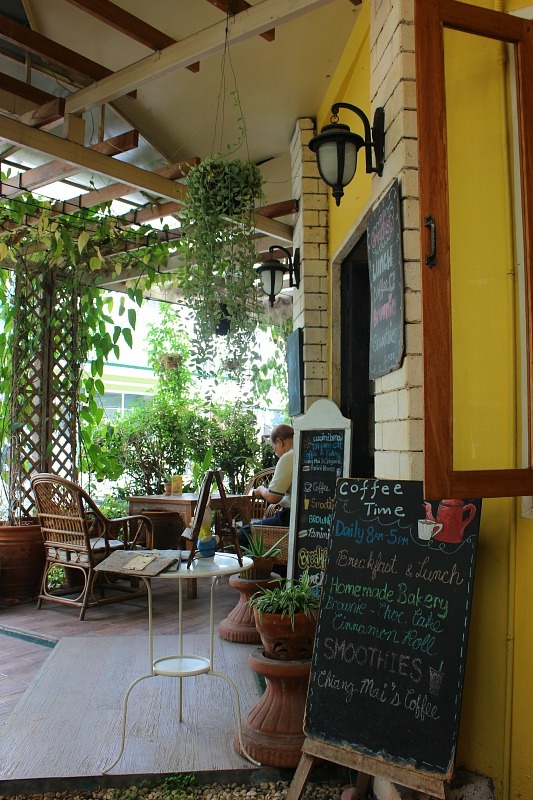 I was very pleased to meet so many friendly locals that gave us so much useful information about what temples to visit and where to get great food.

A Professor from Chiang Mai University informed us that it was a Buddhist holiday and that there would be ceremonies in the evening at some of the temples around town, so we were able to change around some of our plans to attend.

Visiting the Temples in Chiang Mai

A large part of our only full day in Chiang Mai was dedicated to visiting the many temples, known as Wats in Thailand. I enjoyed all of them because this was my first taste of Buddhist temples, but there were definitely some that stood out more than others. 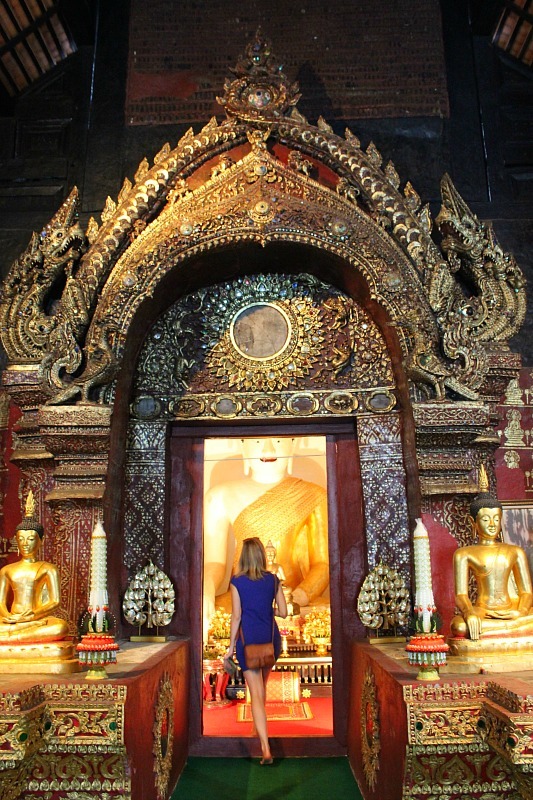 Wat Phra Singh, Chiang Mai’s principal Monastery, is one of the most famous in the city. It was a beautiful temple complex but what interested me about it the most was the incredibly lifelike monk statues.

These eerie statues are made of wax and resin and were created to honour highly respected monks. I kept expecting them to move and have never seen anything quite like it. 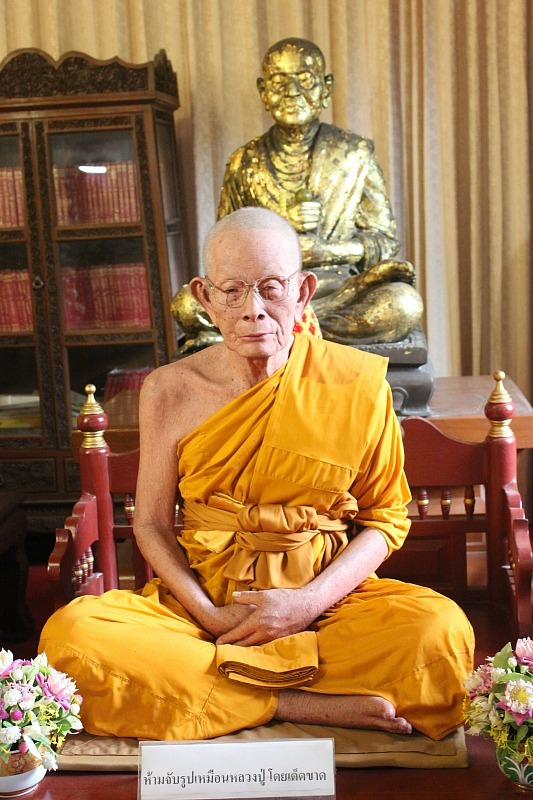 Wat Sri Suphan is a stunning silver temple located just outside of the old town walls. This temple is covered in intricate silver panels that showcase traditional Lanna silversmith skills.

It shone and sparkled in the bright sunlight and was truly a unique sight to behold. There are also other beautiful temples onsite that are more traditional, i.e. not covered in silver. 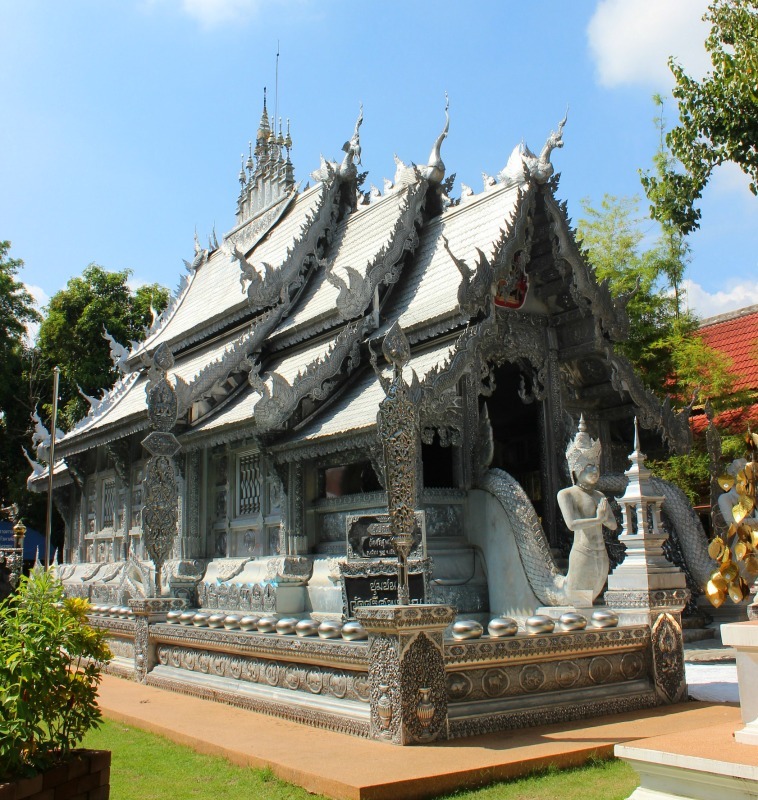 Wat Phra That Doi Suthep is probably the best known temple in Chiang Mai and is reached by taking a shared taxi 16km out of town, along a windy road into the mountains. It definitely turned out to be my favourite and I am so pleased we waited to visit at sunset.

We arrived just as the sun was setting, walking up the long tiled staircase to the temple complex overlooking the lights of Chiang Mai in the distance. 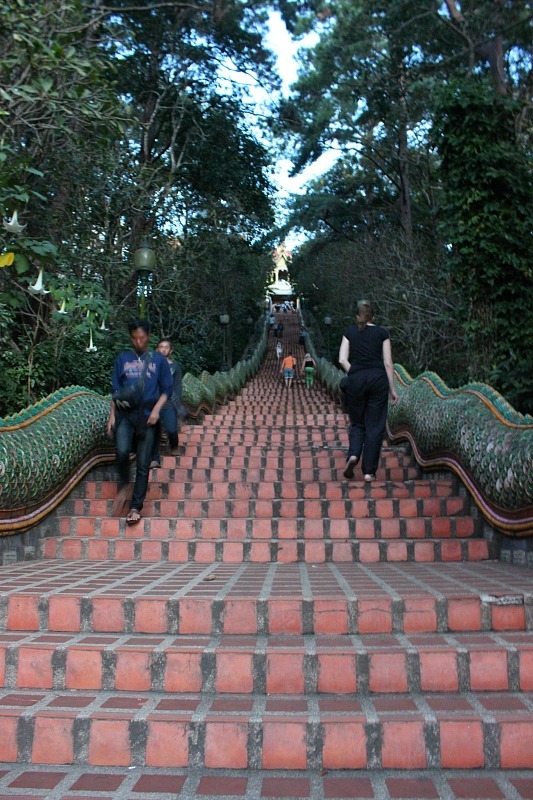 There were people sitting around waiting for a ceremony to begin so we sat and waited too. Before long a procession of monks in their distinctive maroon robes came out of the small temple in front of us and lit candles as the sky darkened into night.

Once the candles were lit the monk’s retreated back into the temple and we followed. Kneeled before the shrine, they chanted in unison. It was rhythmic and soothing, and a trancelike feeling of peace vibrated through me. I could have sat there all night.

As we left the small temple shrine, the golden stupa outside was lit up by spotlights. It was arrestingly beautiful and I gazed at it for a long time. I was so happy to be there in that moment and to witness such a thing of beauty. I realised how very lucky I was. 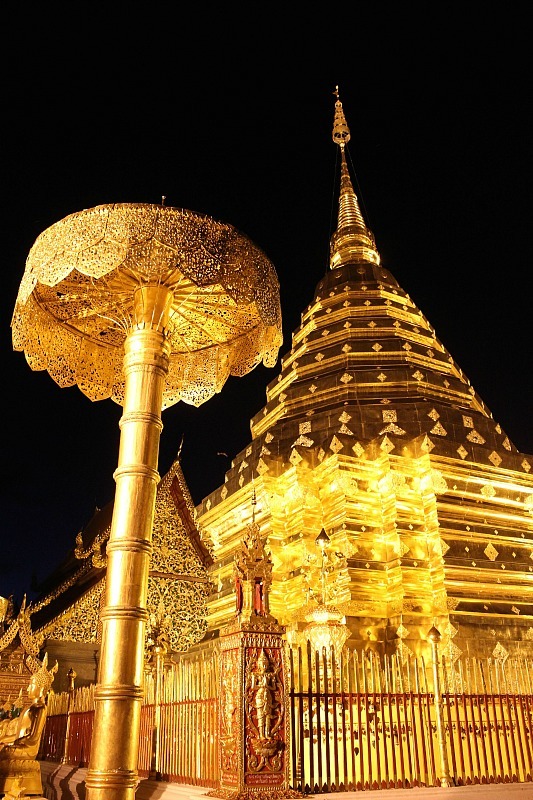 My Lasting Impressions of Chiang Mai

Looking back now, the city itself wasn’t one of the most spectacular I have been to but adding up all the little things I liked about it – the peaceful Wats, the delicious food, the friendly people and the charming old town streets – it turns out that Chiang Mai is quite a special city and I really enjoyed my short time in Northern Thailand’s cultural capital.

I really couldn’t have asked for a better introduction to Thailand. 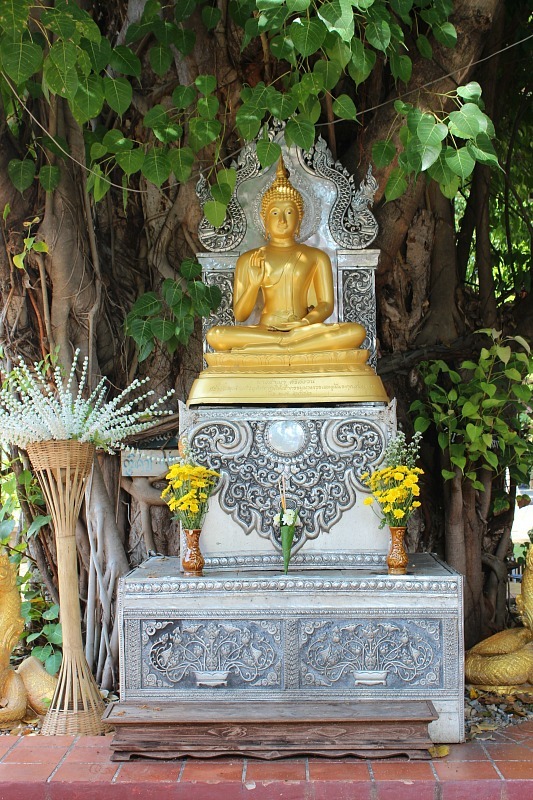