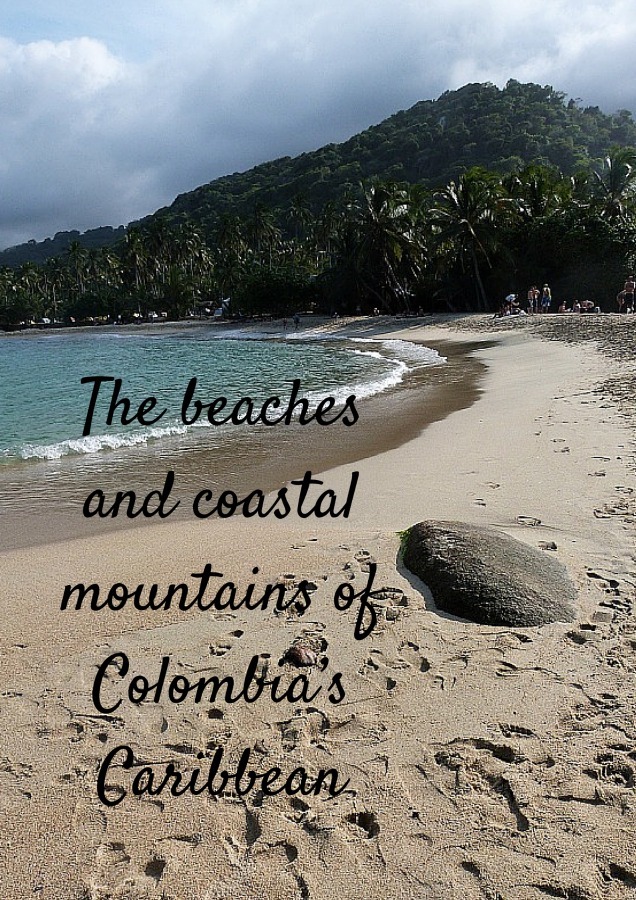 Cartagena is a beautiful and vibrant city with colourful baroque and modernist architecture.

The street food in Cartagena is ever present and we had fun trying different varieties such as the Colombian staple arepas, which are like thick tortillas made with corn. You can eat them plain or stuffed with egg or meat. 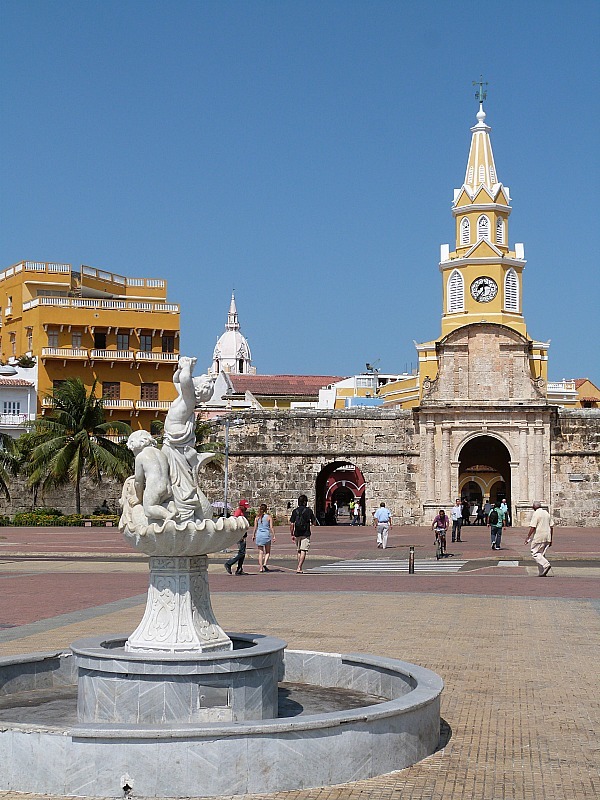 My favourite food in Cartagena were the empanadas, the Colombians sure like their deep fried foods but if you can find baked empanadas, they are heavenly.

There is also a mind-boggling selection of tropical fruits and juices in Cartagena with the neighbourhood juice peddler is a familiar sight, pushing his cart along the busy streets of the old town. My new addiction is freshly squeezed limonada.

We met up with friends from our disastrous boat trip from Panama and had a fun night out. The city is really magical at night, with the cobbled streets and numerous horse and carriages, it feels as if you have gone back in time. 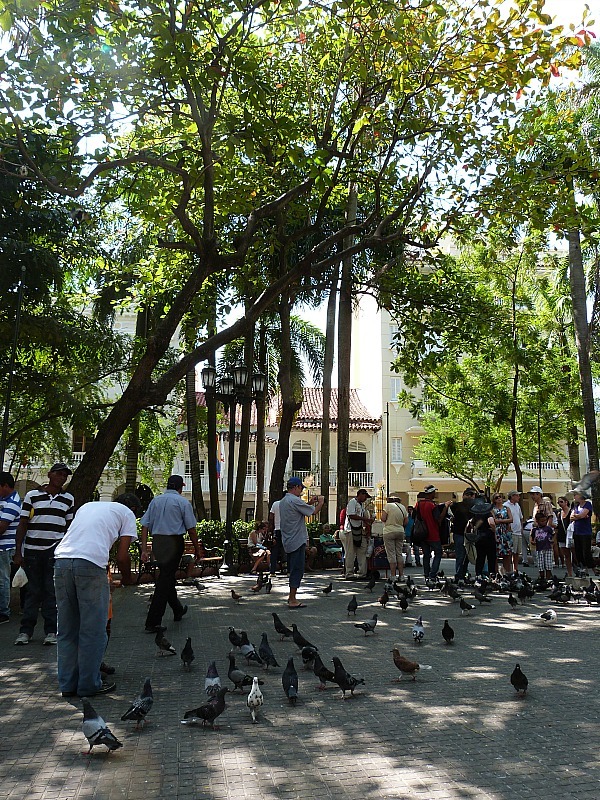 We took a day trip to the nearby Volcán de Lodo El Totum. It is a tiny (15 metres above ground, but apparently hundreds of metres deep) volcano that spews mud rather than lava. Being submerged in the warm, thick, creamy mud is a very weird feeling and I felt slightly claustrophobic at first.

The mud is so thick that you can’t move very fast in it and it is hard to submerge yourself more than shoulder deep. When you are done you wash off in a nearby lagoon which is pretty muddy itself.

Little old ladies aggressively try to help wash you off for money. We had to firmly say no numerous times. We saw them washing a girl and they appeared to be roughly massaging her nether regions. Not my kind of happy ending. It was a very unique day out! 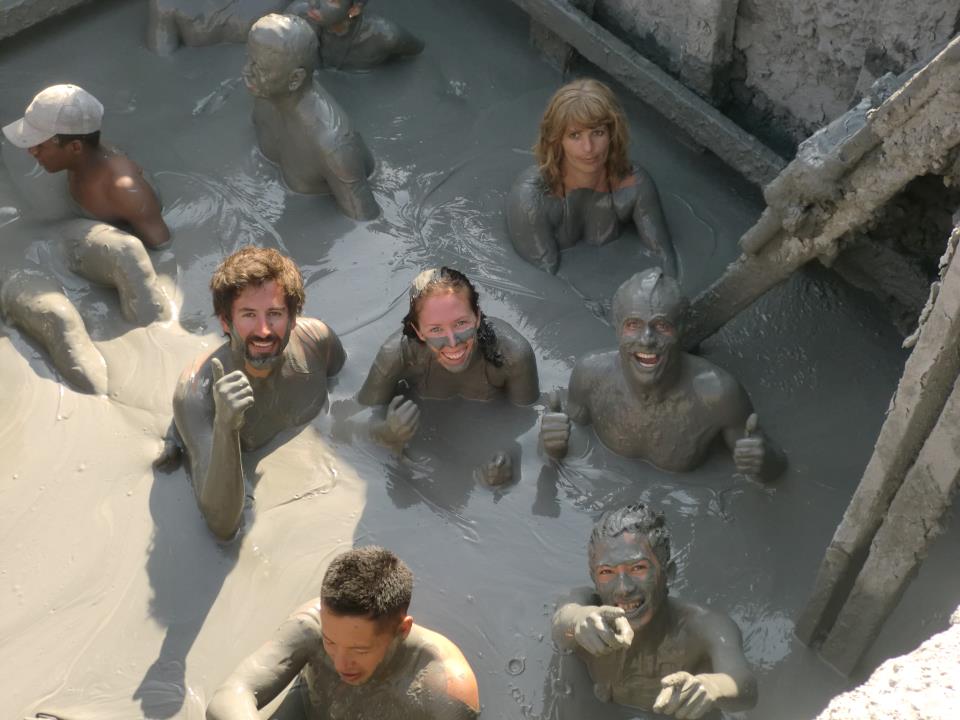 Our next stop after Cartagena was meant to be Minca, in the Santa Marta mountains, but unfortunately, it took so long to get to Santa Marta itself that we had to stay there a night.

I only really saw Santa Marta when we went for something to eat that evening but I wasn’t impressed.

The streets by the beach were reasonably nice and well maintained but the further away from the beach you went, the more dirty and chaotic. The smell was the worst thing – rotten food, dirty water and god knows what else. We left early the next morning for Minca.

I had really high hopes for Minca and I was worried that they were not going to be fulfilled but Minca was incredible, even better than I expected and my favourite place in Colombia.

It is only 45 minutes drive from the sultry heat (and stench) of Santa Marta but is lush and green and, although hot in the day, it isn’t the unrelenting claustrophobic heat of the coast.

We stayed at Casa Loma, a strenuous 15 minutes hike from the small town centre. The view from the top was definitely worth it. Casa Loma added to my love of Minca. It is a beautiful, rustic hostel with views over Santa Marta and the sea in the distance. 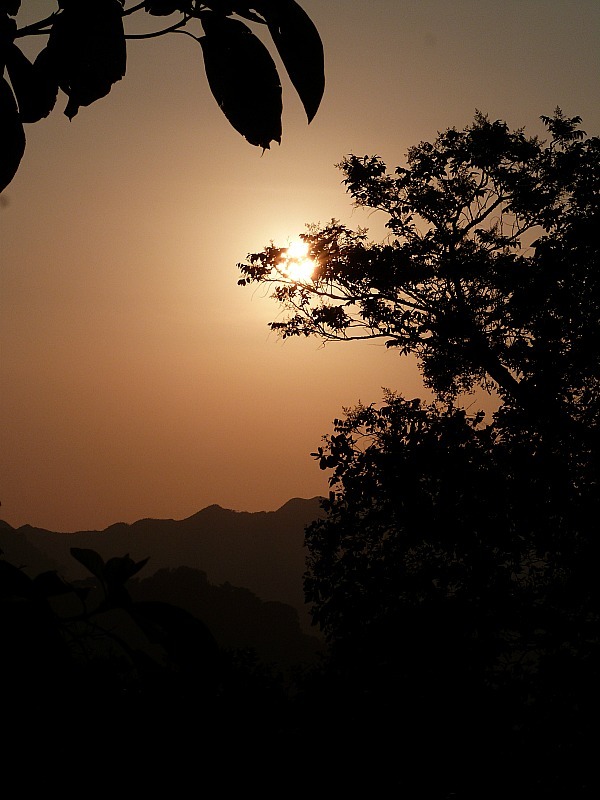 The first afternoon we had an amazing Menu del Dia at a tiny local Restaurant then had a refreshing swim in the stream near town. Had a gorgeous caramel latte at a great café and watched the hummingbirds fight each other. Turns out they are scrappy little things. 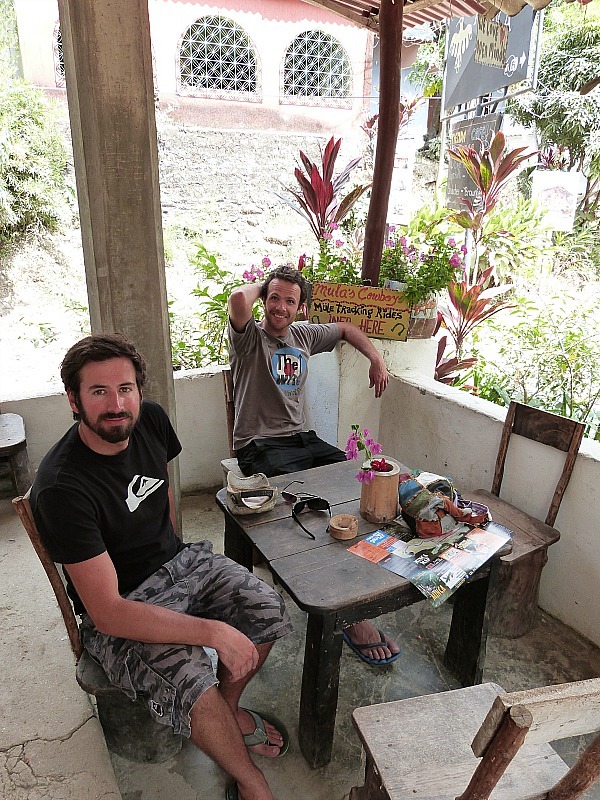 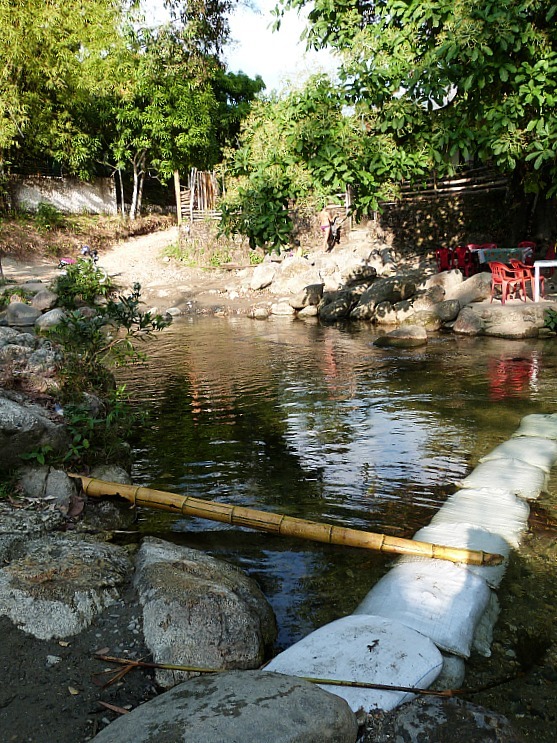 Our second day we went tubing. It was a crazy day, tumbling down waterfalls and slipping over rocks when the water level was too low.

We got back to the hostel exhausted and bruised to a nice surprise: our friends from our disastrous boat trip, Molly, Kate and Lauren, had checked in. We caught up and then all went down for dinner in town.

Our last full day we did part of the Los Pinos hike along a gravel road into the mountains to a small coffee farm. The farm has a breathtaking setting in a green valley with a stream running through it.

It was started 120 years ago and still uses the original equipment to prepare the coffee beans to export. We got to try some of the delicious coffee before we were taken on a tour of the facilities. 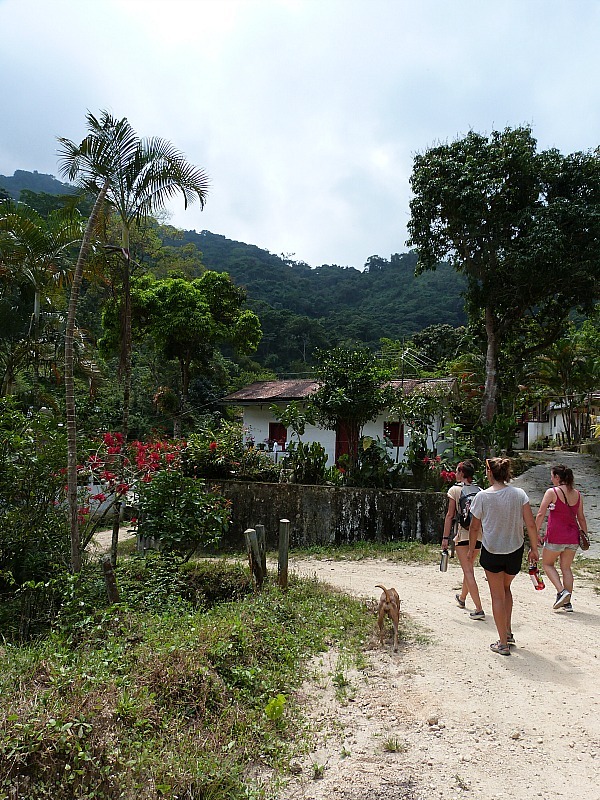 On the way back to town we stopped at Pozo Azul, two waterfalls with crystal clear swimming holes, for a quick dip. I really wanted to stay in Minca longer but the boys were keen to move on so off we set for Tayrona, a national park further up the coast from Santa Marta. 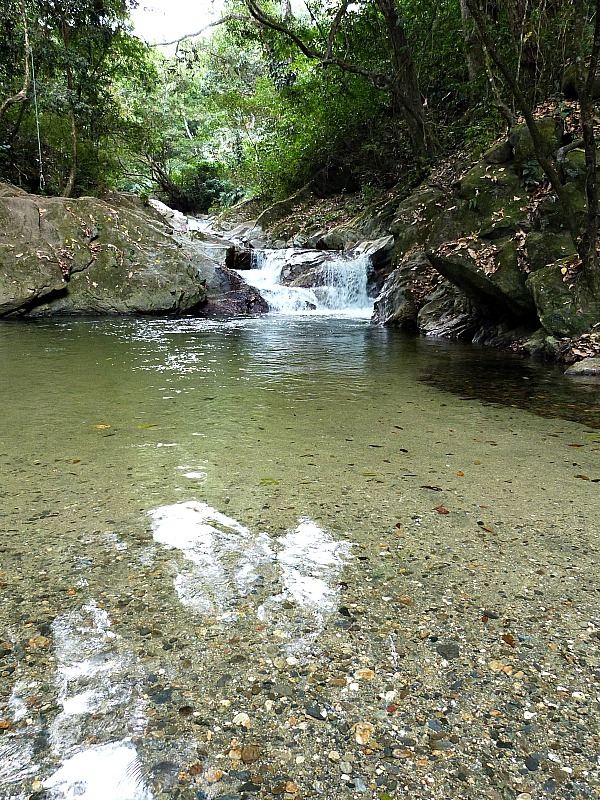 Tayrona is known for its beautiful beaches which you have to hike in to, it is also known as being an overcrowded nightmare in tourist season. As we were arriving there one week after official tourist season ended, we had our fingers crossed.

It turned out to be pretty quiet and apart from the two most famous beaches – La Piscina and Cabo San Juan – it was practically deserted. 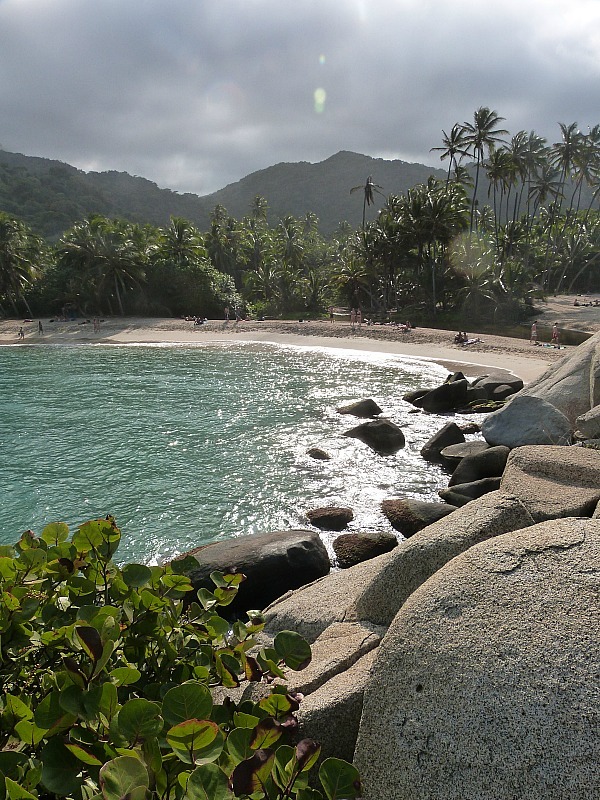 We roughed it in hammocks amongst the bugs and cooked our meals in the outdoor ‘kitchen’ which was actually a grill over an open fire. I did a bit of hunting and gathering, knocking some bananas out of a tree. It felt good.

The boys also got some coconuts and bashed them open with a rock. Living off the land. Oh yeah. 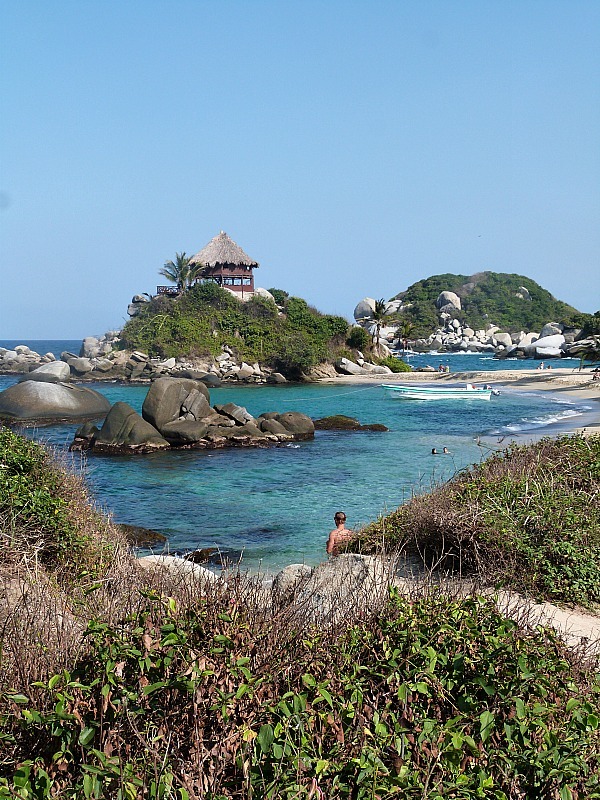 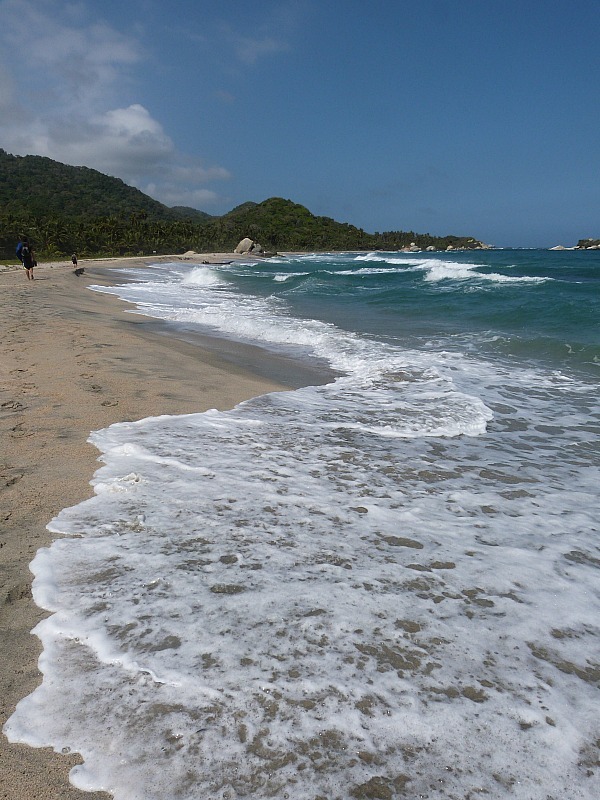 We were going to head to Palomino further up the coast after Tayrona but at the last minute decided we had had our fill of beaches for a bit (spoilt brats, I know) and to head into the mountains to San Gil, the adventure capital of Colombia, instead.

I do kind of regret not going to Palomino now, as it is a great place to learn how to surf and that is something that I am interested in doing in the future. Surf Hungry has some great surfing tips I would love to try!

A fantastic time was had by all exploring the Caribe coast and mountains of Colombia. Fascinating, wild and beautiful.