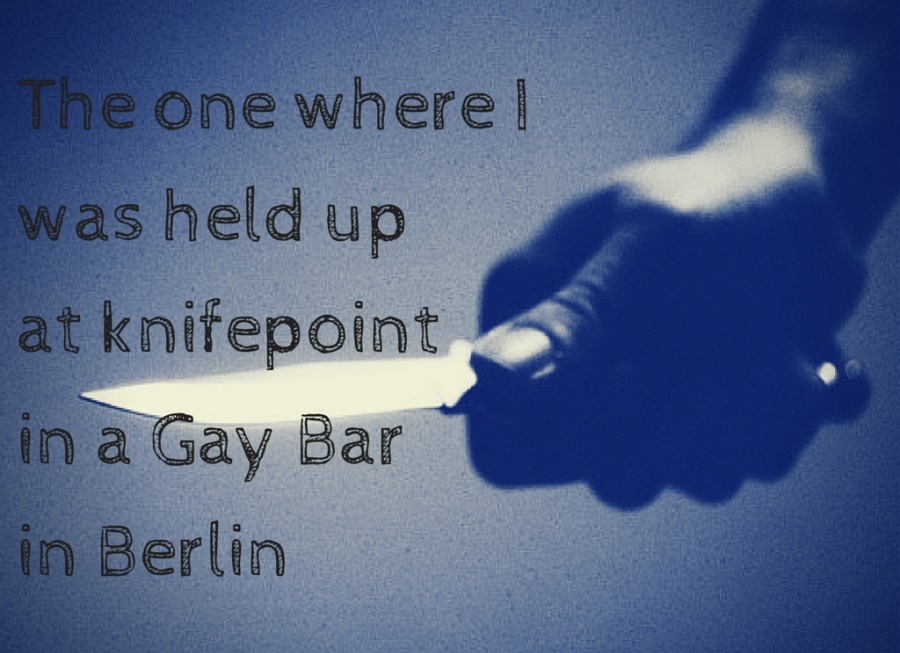 Unless you are abnormally lucky, you will come across some frustrating, annoying and sometimes downright scary situations during your travels.

Sometimes I feel like I have more bad luck when I am travelling than most, generally in regards to travel delays and stuff being stolen. I have been lucky in the fact that I haven’t had many violent altercations. None at all, in fact.

Well, except this one. And it was a doozy.

It was back in 2007, when I was backpacking through Europe with one of my best friends Kurt. This trip quickly turned into a series of misfortunate events – from various thefts, missing a flight unknowingly by 2 days, train delays, overspending my budget and having to sleep in a park where all of my bags were then stolen while I was sleeping.

I thought nothing could top that last one, but less than a week later something did.

Berlin marked the half way point of our two month trip so my boyfriend Trav, and Kurt’s friend Eddie flew out to meet us for 4 nights of fun in Germany’s capital.

On our first night together, we headed out for a drink and ended up at a quiet gay bar. Sitting down the side of the bar in a nook with couches, we had a couple of drinks and were enjoying catching up.

On the way back from the bathrooms, an English guy in his thirties asked Eddie what the time was. Eddie told him and he took that as an invitation to sit with us, plonking himself down without asking if he could join us.

Usually I love meeting new people and even though we thought it a bit unusual that this guy would just sit with us without asking, we joined him in on our conversation.

He started making snarky comments and ridiculing us. Riled up, we asked him why he was sitting with us when he obviously didn’t like us. Things escalated pretty fast from there.

He kept being nasty, we asked him to leave, he asked me for a cigarette when I lit one up, I said no, he went to grab it, Trav physically held him back from me.

Things get blurry around this point but from what I remember there was a bit of a tussle then suddenly he was waving a serrated hunting knife at us.

We were trapped in a corner, with a glass coffee table between us and this crazy knife-wielding man. We couldn’t make a run for it. He was blocking our only escape and as the bar tenders were around the corner, they couldn’t see what was happening. There were no other people in our section of the bar.

He was acting very erratically and was so angry and charged with energy that he was shaking. He would thrust the knife towards all of us over the table in jerky stabs, laughing maniacally and yelling ‘Who’s the joke now?!’

Somehow we managed to stay calm and spoke to him clearly and concisely, telling him that we didn’t think that he was a joke and to put down the knife so we could talk about it.

It’s funny, you never know how you are going to react in a situation like that. I thought that I would be one of those people that scream hysterically, pounding my fists on the assailant’s chest and crying . Turns out that I was very calm in the face of danger, we all were.

Looking back now, I am really impressed and proud of how we dealt with the situation. None of us lost our cool despite being terrified.

Unfortunately speaking to him calmly didn’t help and his crazy rant continued. Then he grabbed his bag and showed us the contents.

It was completely full of knives.

He started pulling different ones out, of different shapes and sizes, waving each one at us across the table.

Now we were really scared and started wondering if we were going to get out of this unharmed. Was this going to turn out to be our worst nightmare come to life?

The maniac started to take a particular interest in Trav and I quickly stopped fearing for my own life, and started fearing for Trav’s.

He put the tip of one of the knives against Trav’s stomach and was shaking with rage, yelling within centimetres of his face.

I tried to get his attention, I think I asked him to leave Trav alone as he hadn’t done anything. I was so scared I was going to see my boyfriend killed in front of me that I don’t remember what I said but I think it involved some desperate pleading. I vaguely remember him calling Trav homophobic and saying he hated him.

I’m not sure how long he held us captive for. It seems unbelievable that no one else could see what was happening so it must not have been for long. Maybe only a few minutes but it felt so much longer.

He started saying how he wanted to take Trav outside to fight him. We went along with it because we knew we would have to pass the bar and then finally someone would see what was happening to us. I tried to stay between him and Trav as we were walking out, I was scared if I walked ahead like he wanted me to that he would stab Trav.

He pressed the knife to Trav’s stomach and pulled it across. Luckily the knife was blunt and it didn’t cut him.

It is unclear in my memory what happened exactly as we walked past the bar. There was some shoving and shouting, the bar tenders got involved and the crazy guy was taken outside while we stayed in the bar.

He stood outside the door taunting us, with a triumphant smile on his face. He saw how much he had scared us and he was feeding off it.

Trav was so angry, he actually wanted to go out and fight him. I dragged him to the toilets with me so we would be away from the nutter and to stop Trav from going outside. The knife may have been blunt but I am sure with enough force he could still do some damage.

The bartenders said that they called the Police but seemed quite calm about the whole situation. The crazy man continued to stand outside the door, watching us and laughing. One of the bartenders went outside to talk to him.

We waited and waited. The crazy man left. The police never showed up. The bartenders were unfazed.

Something was wrong with this picture.

Was this guy a local lunatic who had done this before? It seemed like one of the bartenders knew him and they didn’t seem worried that he was a threat. We started wondering if they had even called the police at all.

We were very shaken and stayed for another drink to calm our nerves. I was terrified that he might be lurking around somewhere outside so when we did finally leave, I took an empty beer bottle with me as a weapon.

Luckily we didn’t see him again.

This incident definitely marred my time in Berlin. I know that this could happen anywhere and I didn’t feel unsafe in Berlin other than that night but it is hard for me to separate this event from my memories of Berlin. Everyone always raves about what a great city it is but whenever I hear it mentioned, I instantly think back to that crazy man waving a knife at us.

And the bartenders that didn’t give a damn.

Have you ever been held up at knife or gun point? Do you think if this happened to you that it would affect your experience in the place it happened? 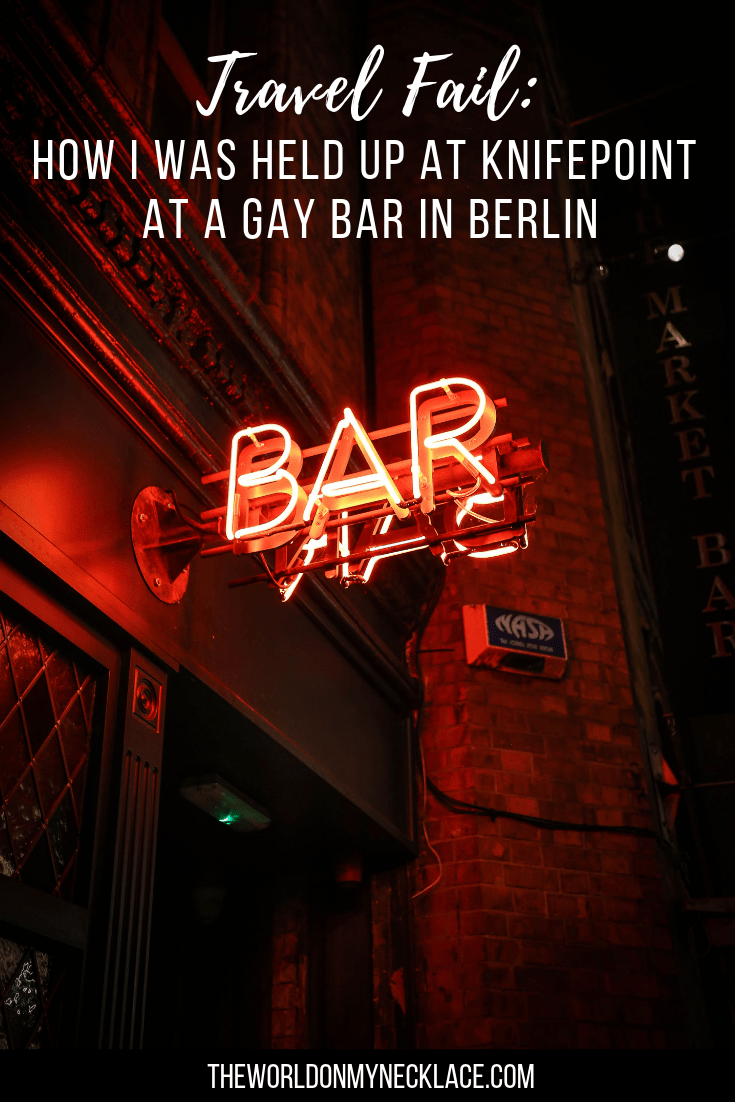