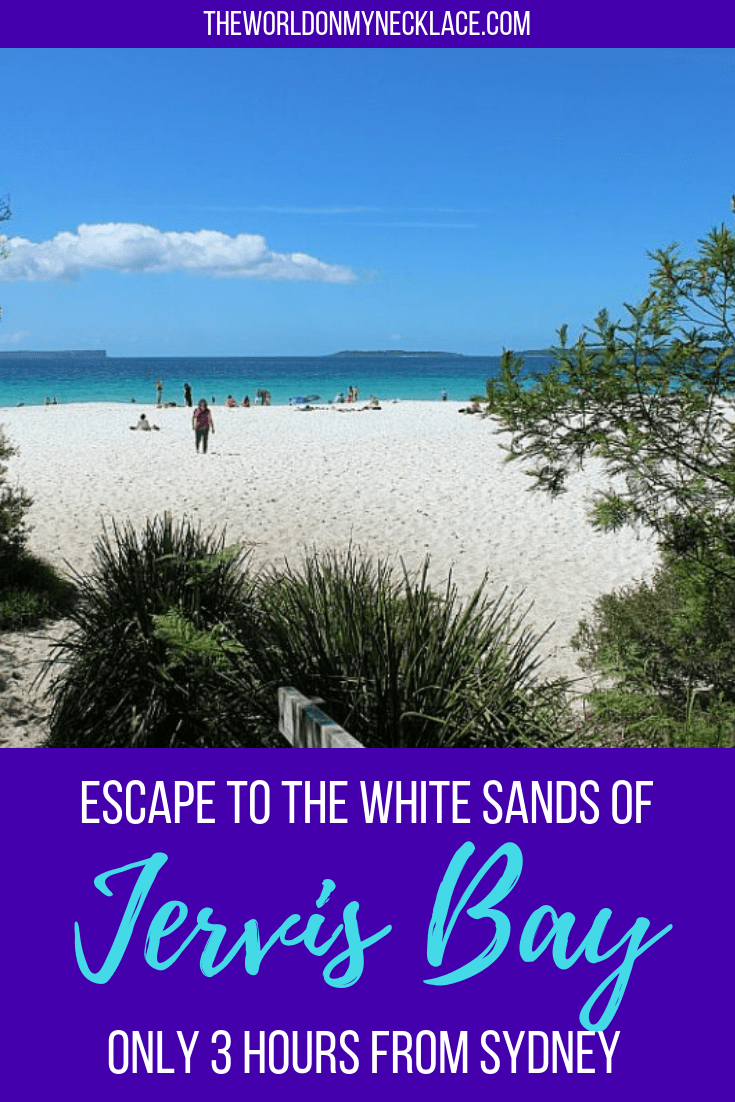 Jervis Bay is a great choice for a weekend getaway from Sydney, and there are lots of fun things to do in Jervis Bay and the surrounding area to keep you busy.

I had been wanting to get down to Jervis Bay on the South Coast of New South Wales since I first heard that Hyams Beach has the whitest sand in the world (this has since been debunked – but at the time I thought it was), then subsequently seeing a picture of the beach.

There was no going back from there. Just look at this place. 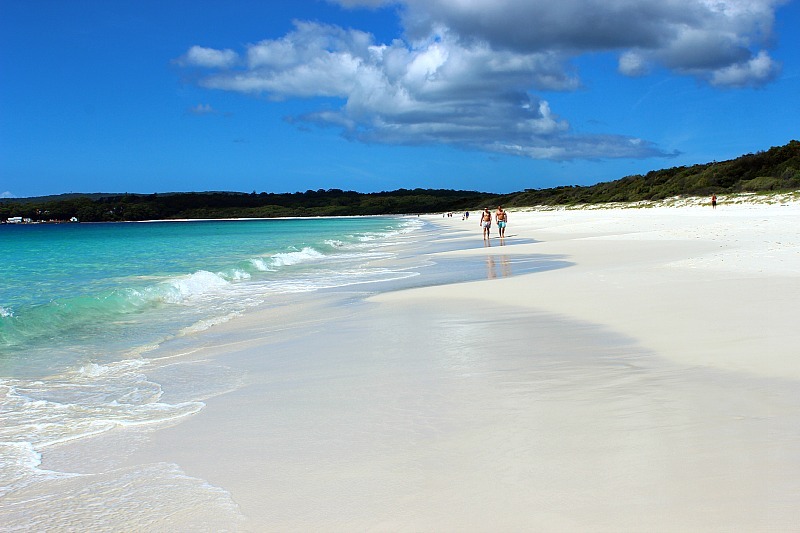 Ridiculously good-looking or what?!

And Jervis Bay is just one of the magnificent beaches in NSW.

Jervis Bay is a large bay located on the South Coast of NSW, only 2.5 hours drive south of Sydney, and it is the perfect stop off on an East Coast Australia Road Trip.

The bay is made up of protected National Park, gorgeous beaches, and small towns with Huskisson, where we stayed, being the largest. Unbelievably, the bay is at least six times larger in volume and four times bigger in area than Sydney Harbour. And Sydney Harbour is BIG. 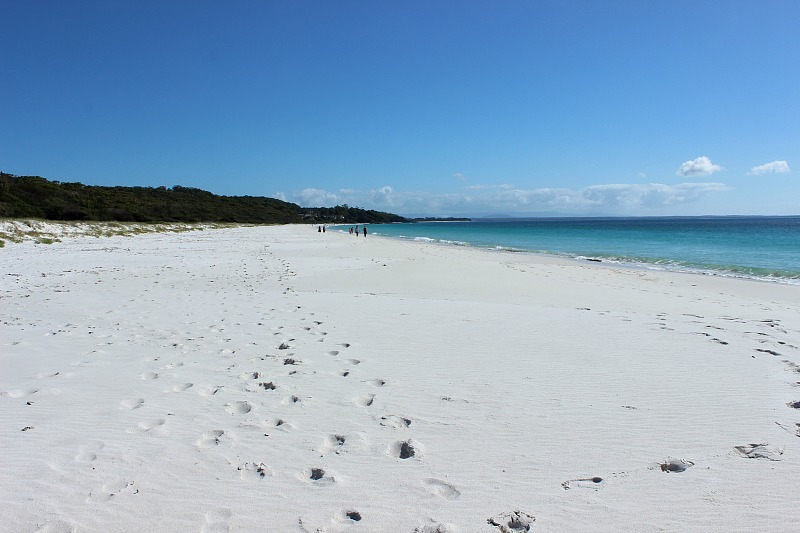 We convinced a couple of friends to make the trip with us which admittedly wasn’t hard. I found a cute apartment to stay in and we arrived after dinner on Friday. After a good night’s sleep, it was time to explore!

We only had two days to explore but we managed to pack in so many of the fun things to do in Jervis Bay. Here’s what we got up to.

The Best Things To Do in Jervis Bay and Surrounds

Go Out For Brunch

Brunch is always a good idea, especially in this part of the world. The best brunch spots in Huskisson are Nutmeg, Salty Joe’s, and 5 Little Pigs, so head to one of these for a delicious brunch to start your weekend. 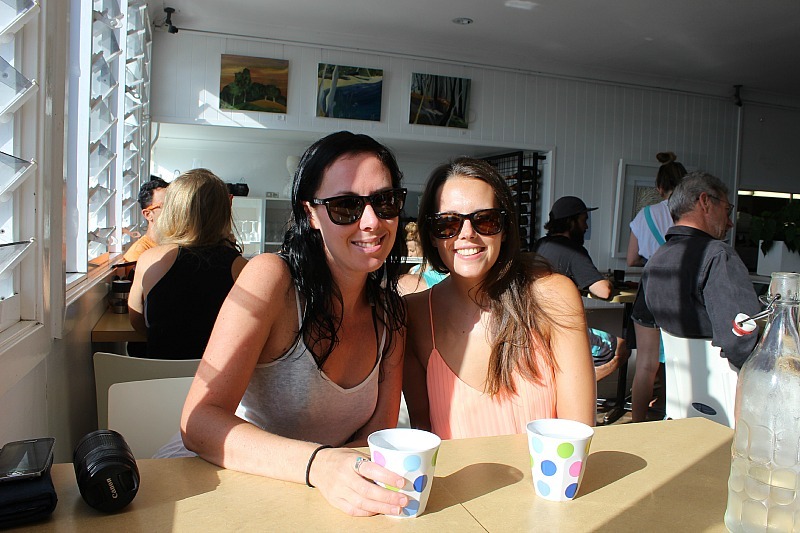 Our first glimpse of Hyams Beach in the flesh was awe-inspiring. It was even more stunning than the pictures. It seemed to stretch for miles before gently curving around the bay.

There were a lot of people at the main swimming area but as soon as we walked further along, the number of people dwindled until we had the beach to ourselves.

The water was iridescent with shades of sparkling blue and the sand was as white as we imagined it to be with a sugary quality to it. It was one of those perfect days with scattered puffy clouds and not too much humidity. 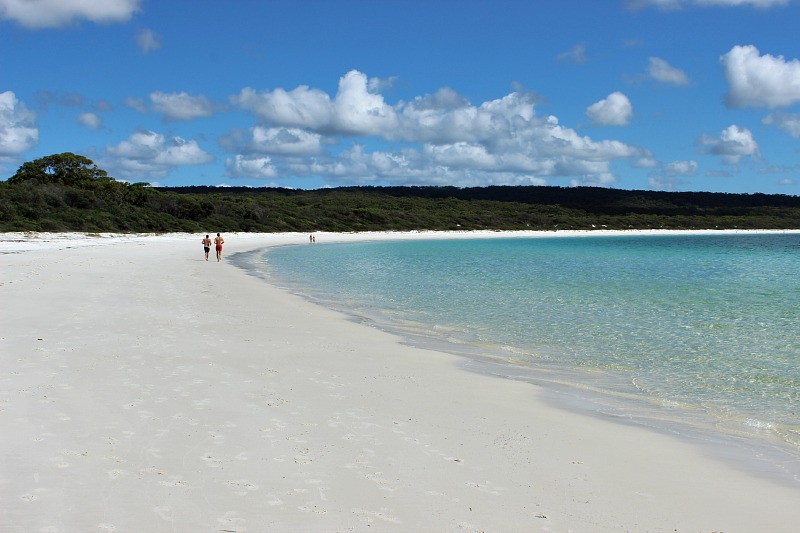 We walked along the shore, dipping our feet into the cool ocean. Planes flew low overhead before dropping boxes above the army base further around the bay; cascading on tiny parachutes to the water below.

I was dying for a swim but we made ourselves walk to the end of the beach and most of the way back before we rewarded ourselves with a cooling dip. 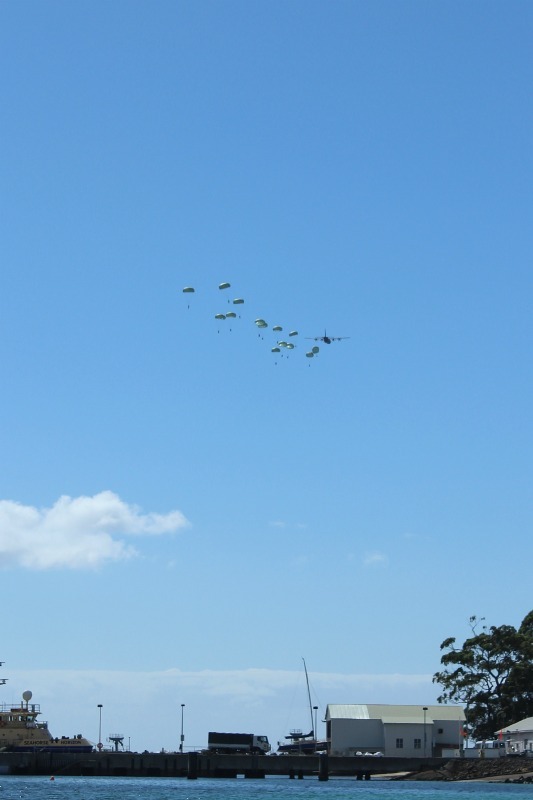 It was worth the wait. I don’t like swimming in water that is as warm as a bath or on the other hand, water that feels like there should be icebergs floating in it. The temperate at Hyams Beach was perfect: refreshing but comfortable.

Lying on the sand and letting the large crystal-like grains run through my fingers while the sun warmed my back was a blissful way to spend an hour. 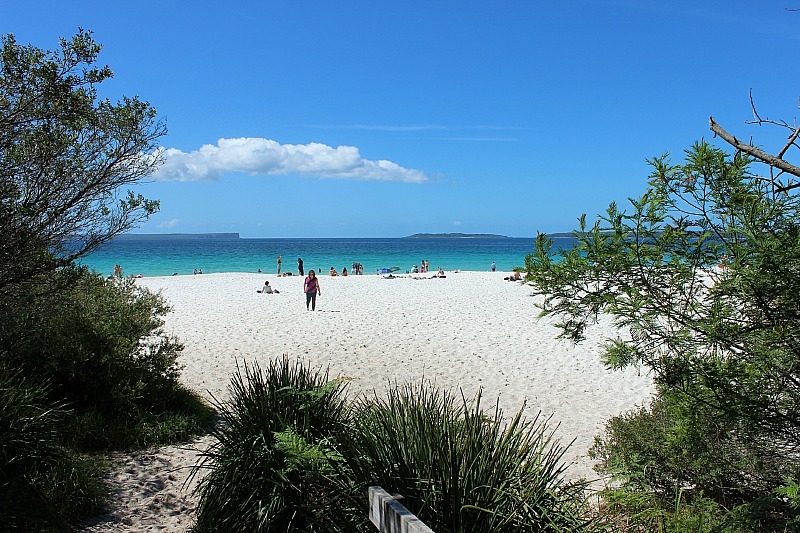 Murrays Beach, at the eastern point of the National Park was our first stop. I had been told by a couple of people that Murrays was even more beautiful than Hyams which after going to Hyams seemed impossible.

Murrays Beach was indeed beautiful but I did prefer Hyams where the water seemed clearer and the sand whiter. It was also a bit windy away from the sheltered inner bay which made the water choppy. 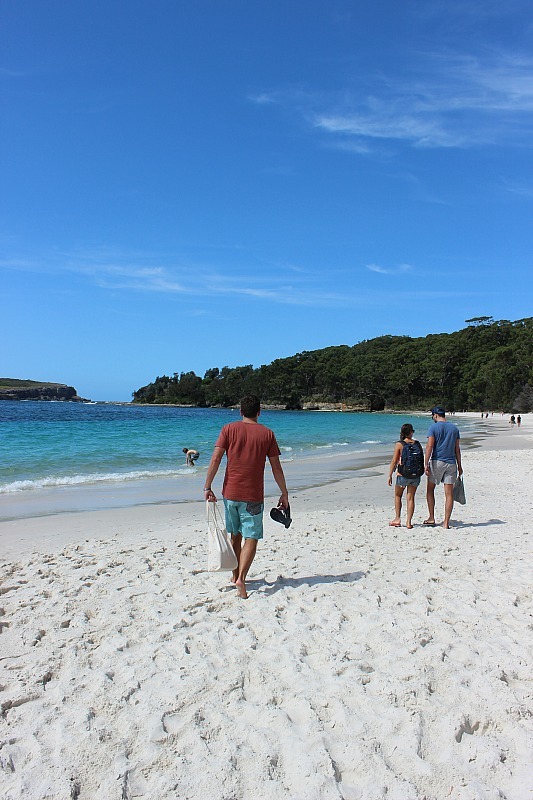 The cool wind coming off the water deterred me from having another swim but we lay on the beach for a while and even saw a kangaroo poking its head out of the bushland behind the beach.

I can only lie around relaxing for so long before the ants in my pants become too much and I have to get up and do something. I decided to undertake the short hike to the lookout over Bowen Island.

It was an easy hike that only took about 30 minutes return. Hiking through a eucalyptus forest the air was still and refreshingly cool.

I emerged at the cliff edge with views out to sea and over to Bowen Island, only 250 meters offshore. The island is home to 5000 breeding pairs of my little friends, the little penguins. 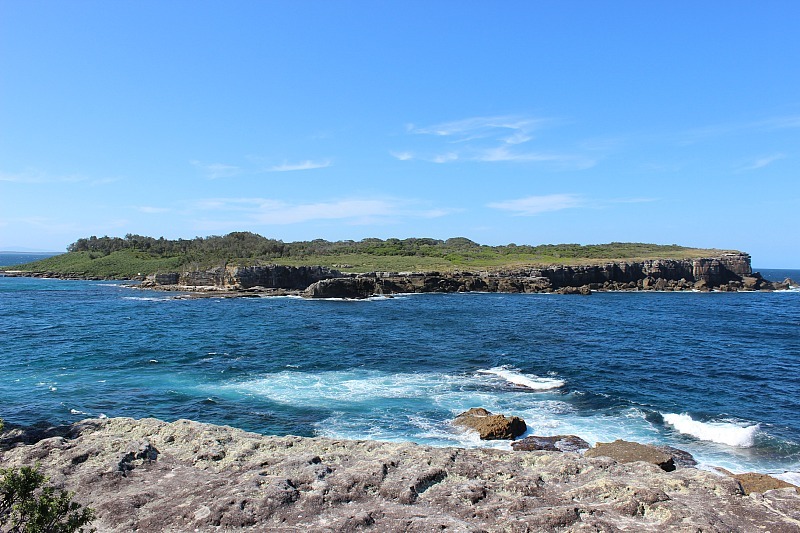 After working with the tiny population of little penguins that live under Manly Wharf, it warms my heart to see they are being protected in such large numbers in other parts of the country.

Parking in the car park we crossed a bridge that spanned a small river with a trickling waterfall further upstream. A small kangaroo was greedily eating grass on a clearing by the beach. 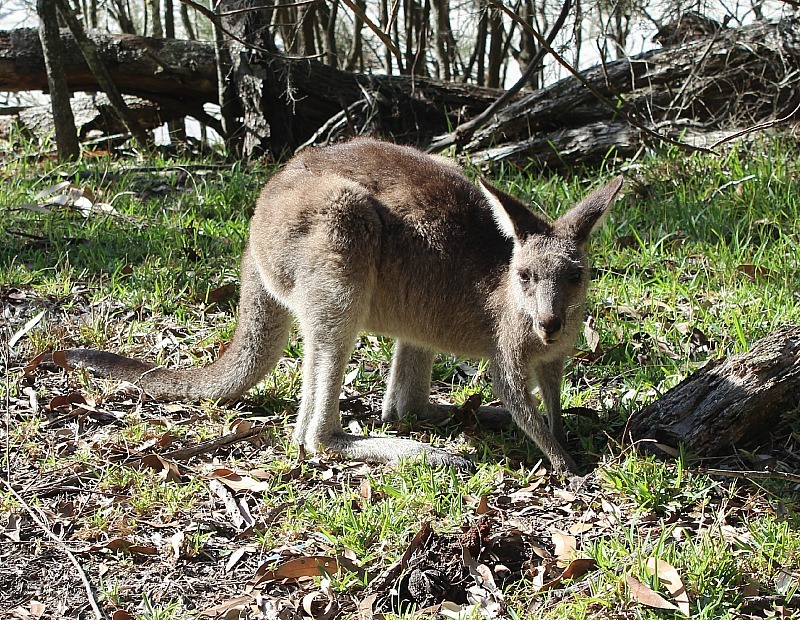 Green Patch was another stunner but Hyams was still number one for me, although the kangaroo definitely gave Green Patch extra points. If you love beaches, why not visit as many beautiful ones as possible, and Green Patch is definitely worth a visit. 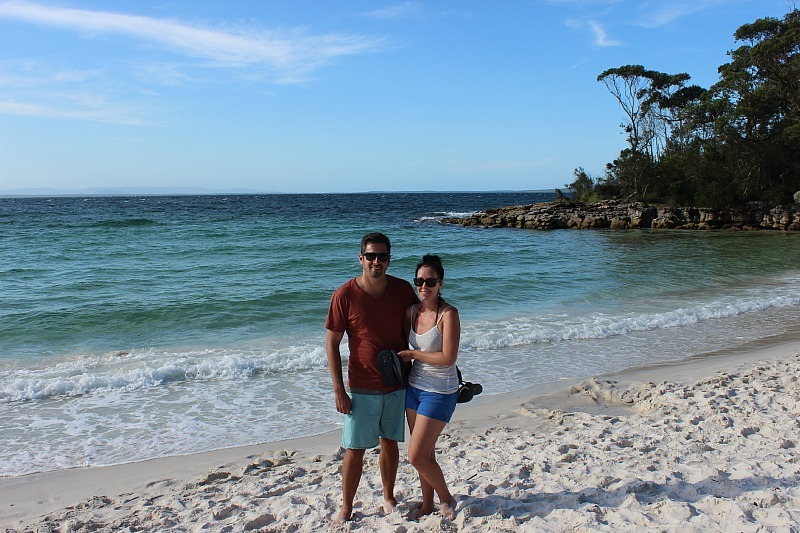 Have a Night Out in Huskisson

Huskisson really comes alive on a Saturday night and there is a festive atmosphere with the pubs overflowing with people. I had heard good things about the Huskisson (Husky) Hotel so we grabbed dinner there.

The temperate had cooled as the sun went down so unfortunately it was too cold to sit on the balcony to enjoy the water view that the Husky is famous for but we got a glimpse of it from our table inside.

They have a pretty extensive menu with general pub food like burgers and pizzas, as well as seafood and steaks. We had a couple of drinks after dinner then called it a night.

Since my visit, Jervis Bay Brewing Co. has opened, and if (when) I return to Jervis Bay, I will definitely be visiting to sample their beer.

On our last morning, we stretched our legs on the White Sands walk from Nelsons Beach to Hyams Beach. It was a weird day weather-wise, with the sky a dull, slate grey, and threatening to rain. 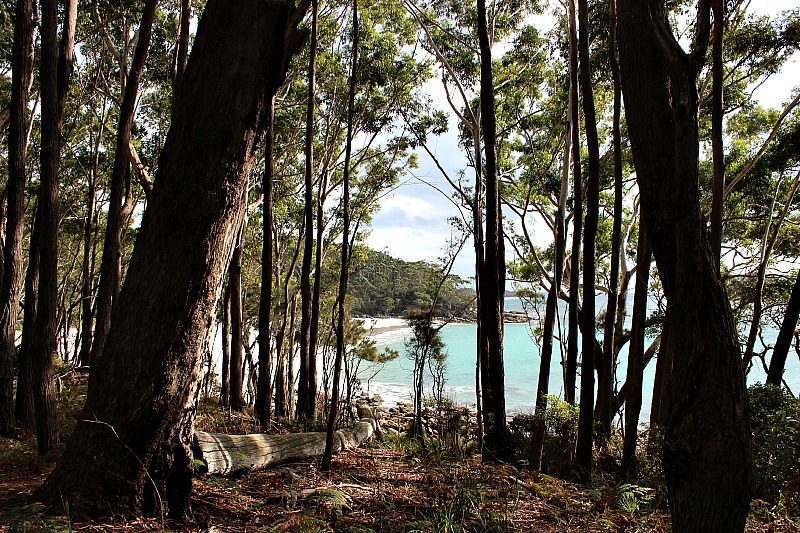 The walk was an easy meander along a forested trail and past the beautiful Greenfields and Chinamans beaches. It is one of the more well-known things to do in Jervis Bay and on a sunny day I imagine it would have been even prettier.

It was our last taste of Jervis Bay with its small-town charm and spectacular scenery. 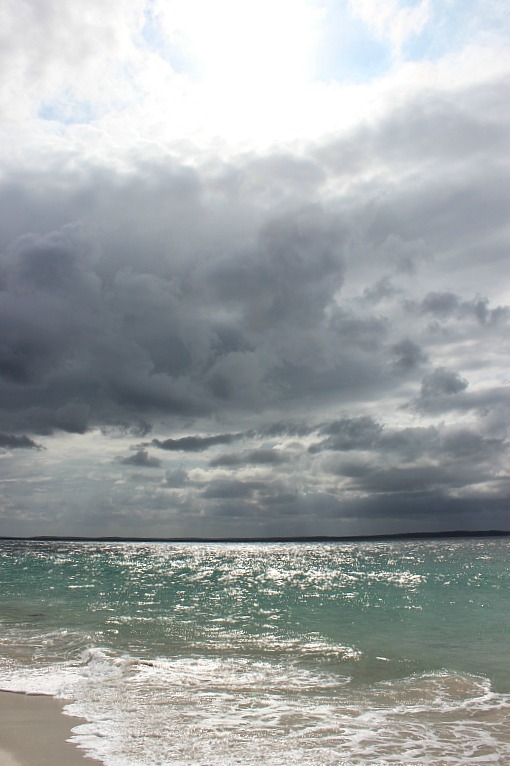 Stop For Donuts and Shopping in Berry

I was told about the small town of Berry a while back and I then promptly forgot about it, then when we were driving down to Jervis Bay on Friday evening we went right through it.

It looked like a cute little town with lots of historic buildings that was worth a visit, then I saw a donut food truck and I knew that we must return. So we did.

The Famous Berry Donut Van was the first place we headed when we rolled into town on our return journey. There was a large line but it moved fast and the donuts were worth the wait. 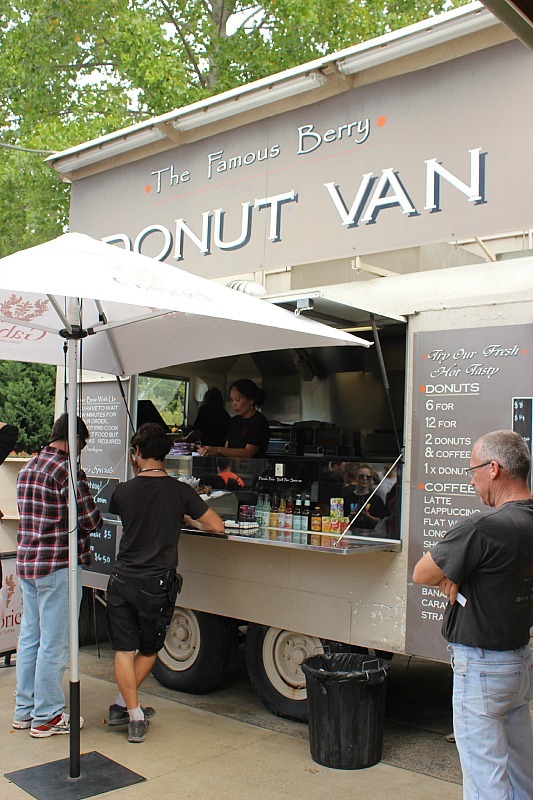 Freshly made, piping hot, and covered in cinnamon sugar – I can see why they are famous. The donuts put me in a great mood despite the less than stellar weather and when I found pez in the incredible sweet shop on the main street – my mood got even better.

I could say that I didn’t eat all eight rolls of pez on the car ride back to Sydney but I would be lying.

Berry is such a sweet little town and it was a joy to wander the tidy main street and explore the eclectic shops. I wanted to buy all the crystals at Shambalaa and there were a large number of stores selling chic homewares, gifts, and fashion. 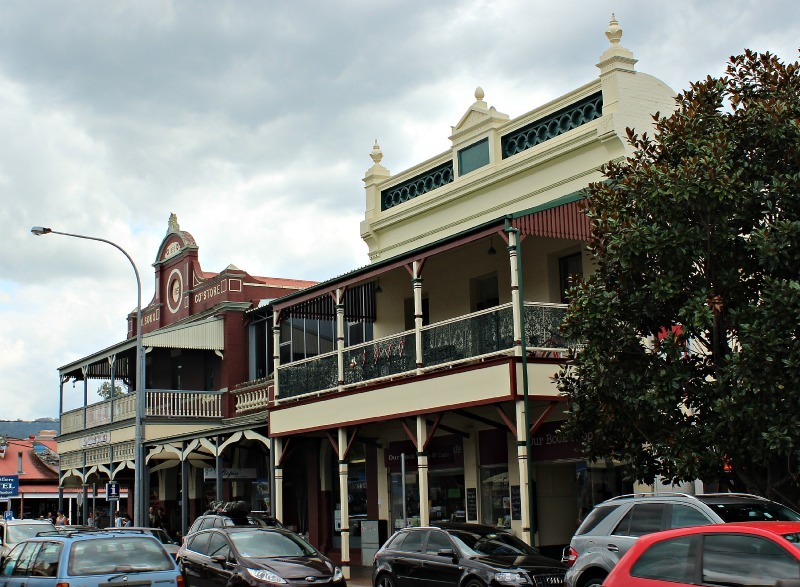 The historic buildings were well-maintained and regal, with some having the intricately designed cast iron terraces that are distinctive to Australia. A small local museum staffed by volunteers was worth a look for old photographs of the town and a varied collection of bric-a-brac.

I love poking around in small-town museums; there is always so much random stuff.

Check Out the Blowholes in Kiama

Our second stop on the way back to Sydney was in the holiday town of Kiama which is famous for its blowholes. I like a good blowhole but am usually left unimpressed when they fail to deliver. Kiama’s were actually quite impressive. 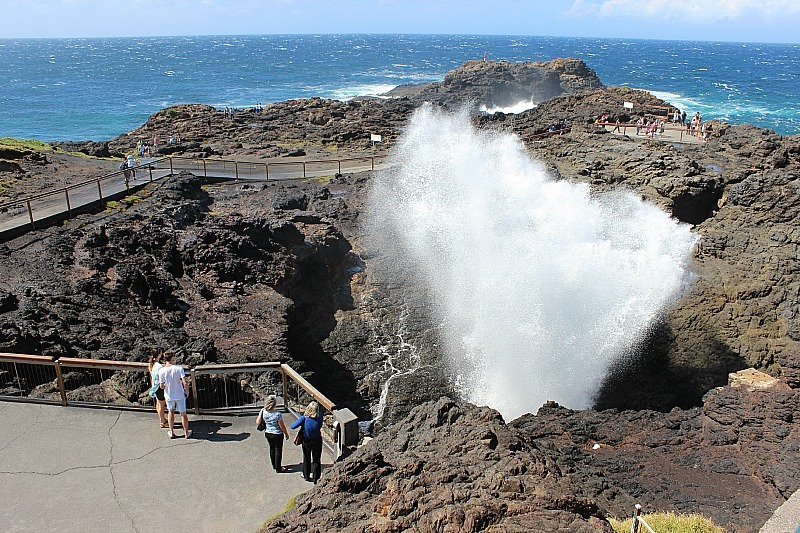 It is incredible how high the water can shoot up when there is a particularly powerful surge, and as we visited on a day when the oceans were rough, that was quite often.

Down from the crowds of people watching the blowhole explode water into the air, there was a beautiful rock pool that looked like a peaceful place to spend the day. On a less windy day I would have been in there too. 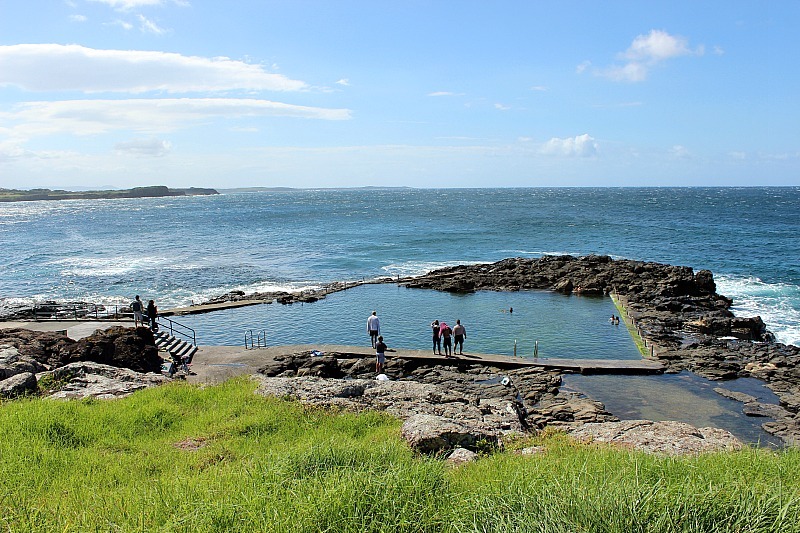 I do love the small towns in New South Wales, almost as much as I love donuts. And the NSW South Coast was such a fun weekend trip, and we loved all the things to do in Jervis Bay.

Where To Stay in Jervis Bay

There are lots of options for places to stay in Jervis Bay, whether you want to camp, stay in a hotel, or rent a vacation home.

The best hotels in the area are The Huskisson, the Jervis Bay Motel, and Huskisson Holiday Motel Cabins.

For vacation rentals, stay at one of these highly-rated, affordable, centrally-located options: 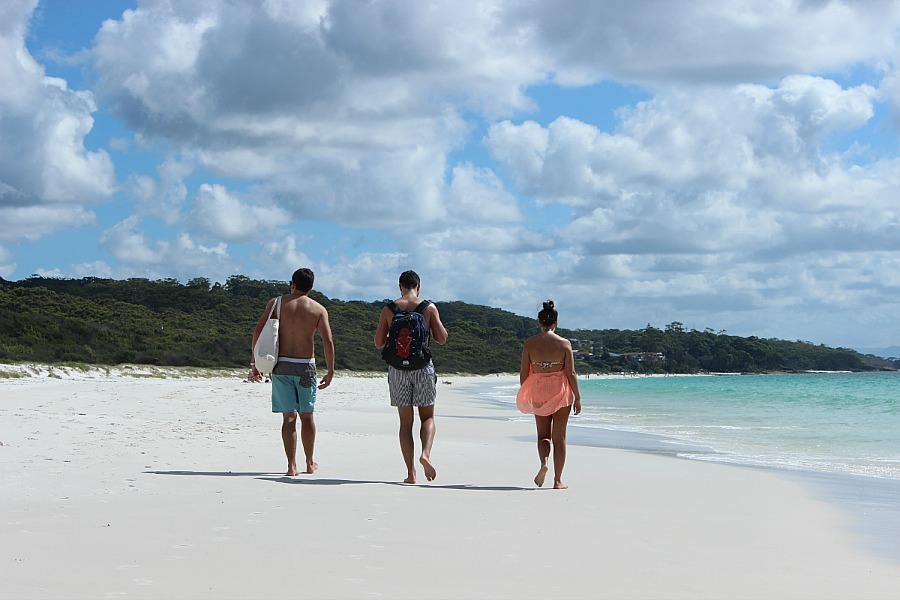 The Best Insurance For Your Jervis Bay Trip

Make sure you get travel and health insurance before your trip. Safety Wing is my go-to and they are cheap and easy to claim with – it auto-renews every month unless you turn it off so you don’t have to think about it for longer trips 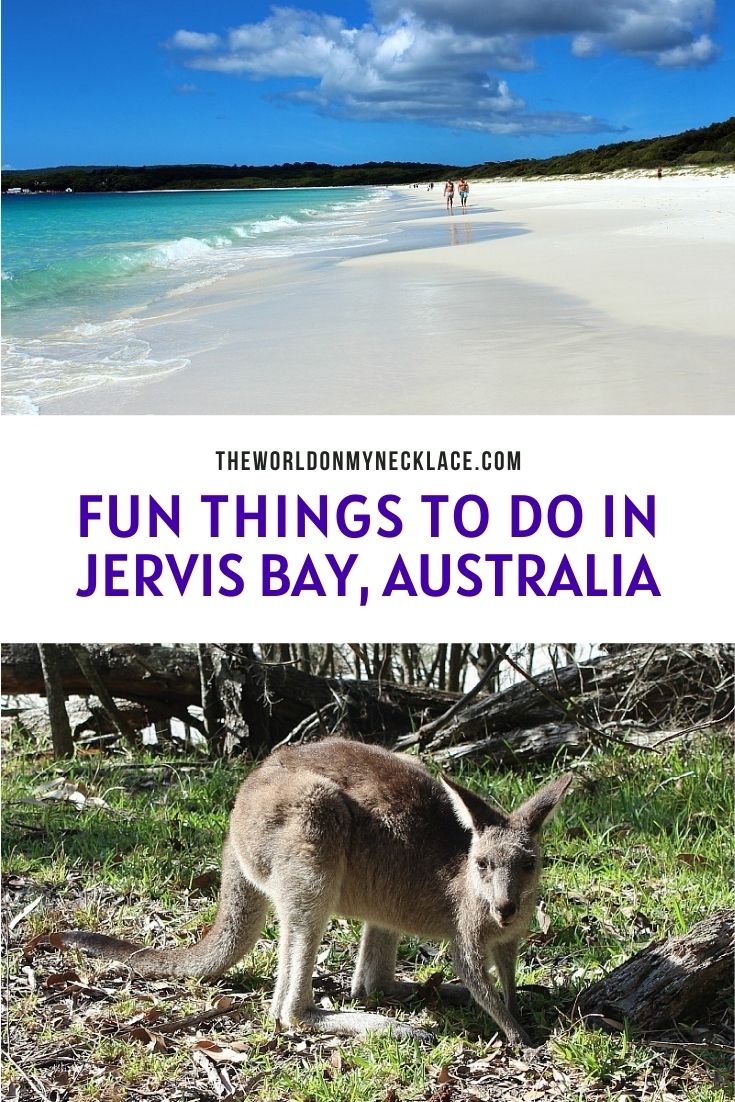 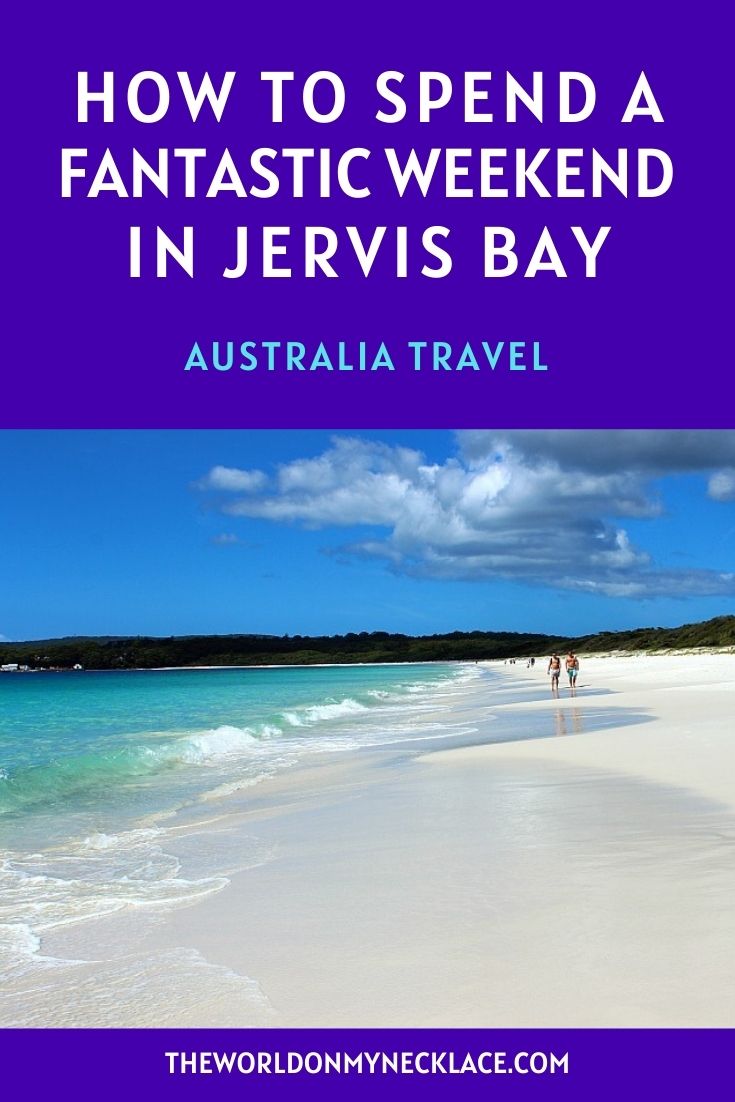 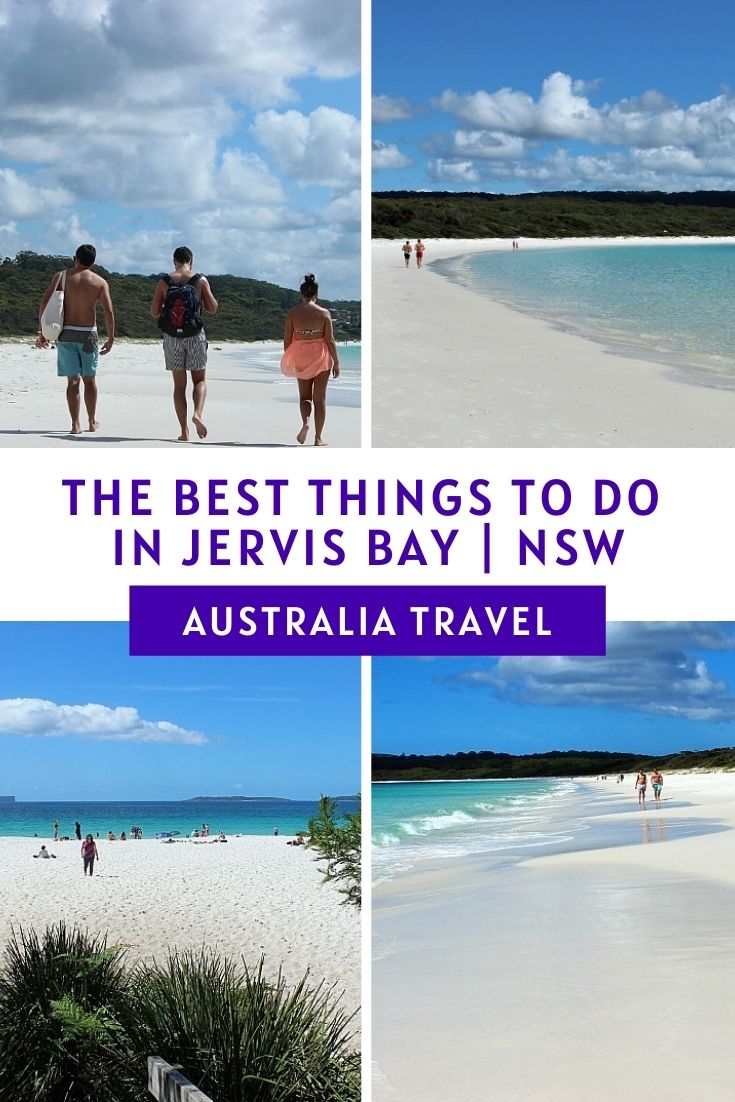 6 Comments on Fun Things To Do in Jervis Bay, New South Wales