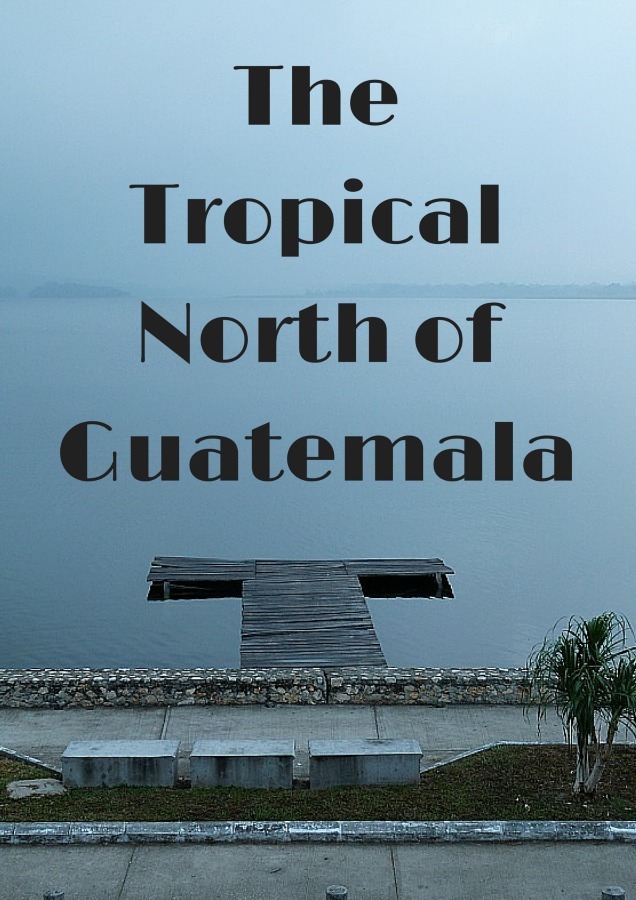 A land of giant Ceiba trees, tiered waterfalls and jungle covered ruins: this is the North of Guatemala.

We arrived from Belize on a minibus to Flores. Flores is a cute little town on an island in the middle of Lake Peten. Although touristy it has a certain charm to it and was very peaceful when we were there.

We only had two nights in Flores as we had to catch up on time due to the extra week spent in Mexico. We did a day trip to Tikal while we were there – one of the top places to visit in Guatemala. 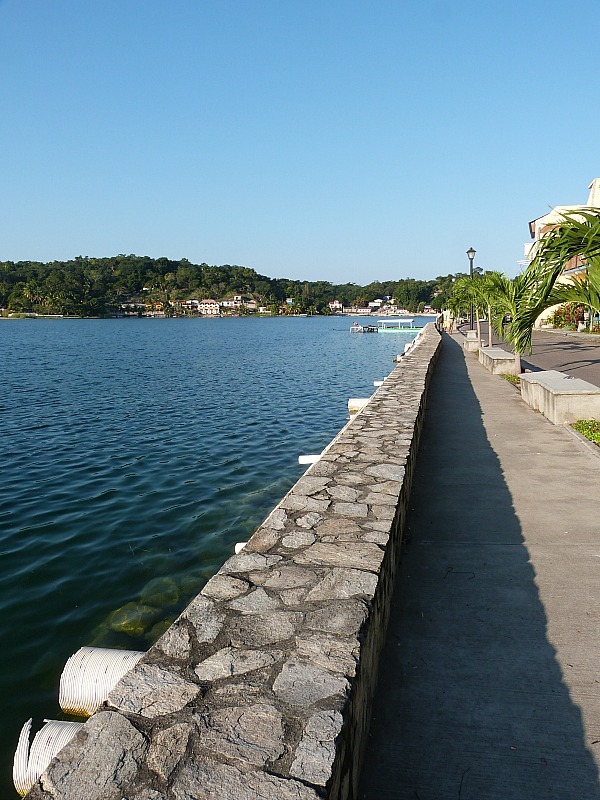 Tikal is similar to Palenque but it is a far larger site and not as much of the jungle has been cleared around it so you are walking through the jungle to get from one temple complex to another. 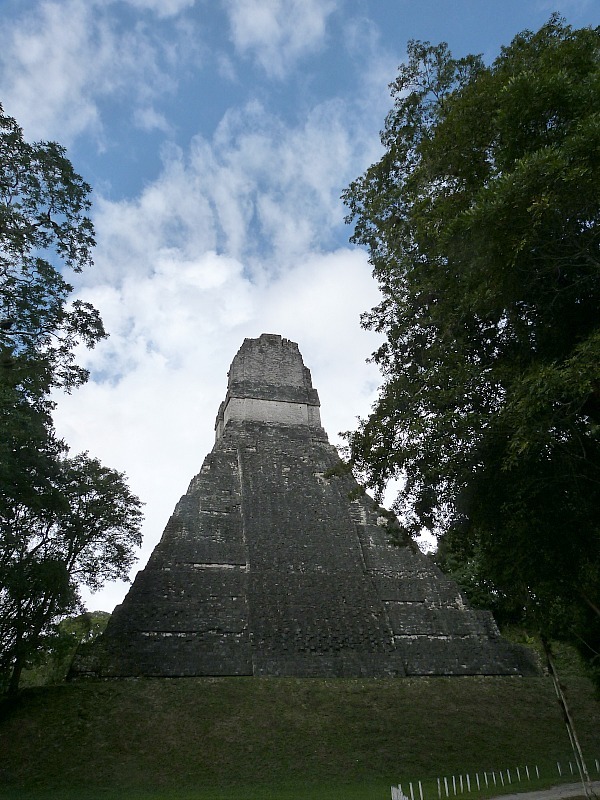 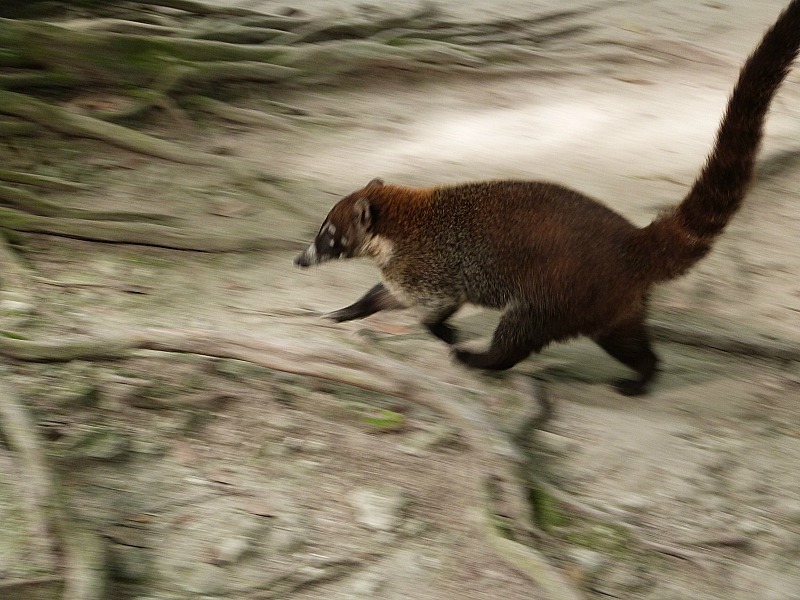 One ritual we came across included the local Mayan people singing and dancing around a fire while pouring something that looked like Tequila into it.

We sat and watched this for a while, the music was haunting in this setting, surrounded by two massive temples and an acropolis of smaller ruins. 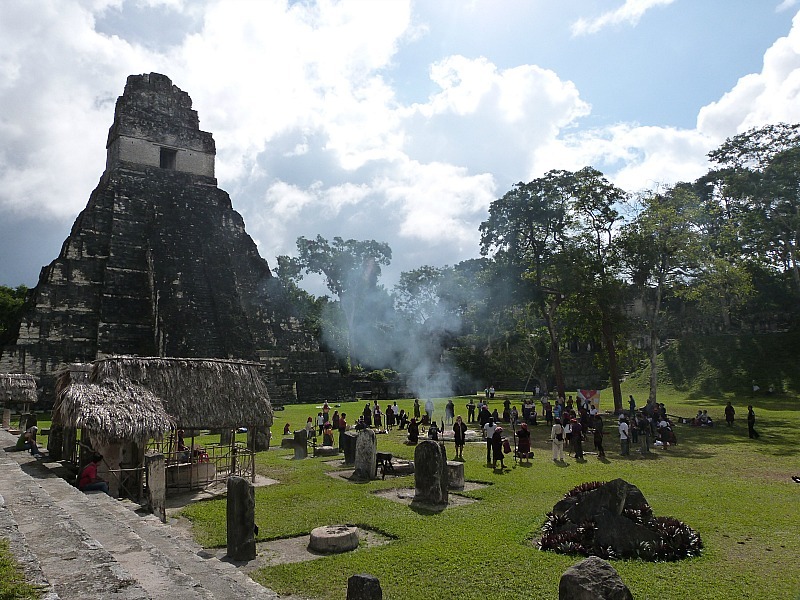 By Temple V we encountered a large group of gringos all wearing white, standing in a circle. All was quiet except for their ‘Leader’ who was reciting something in Spanish (a Cult maybe?). I heard one of the guides watching with us tell his clients that they were praying for rain. 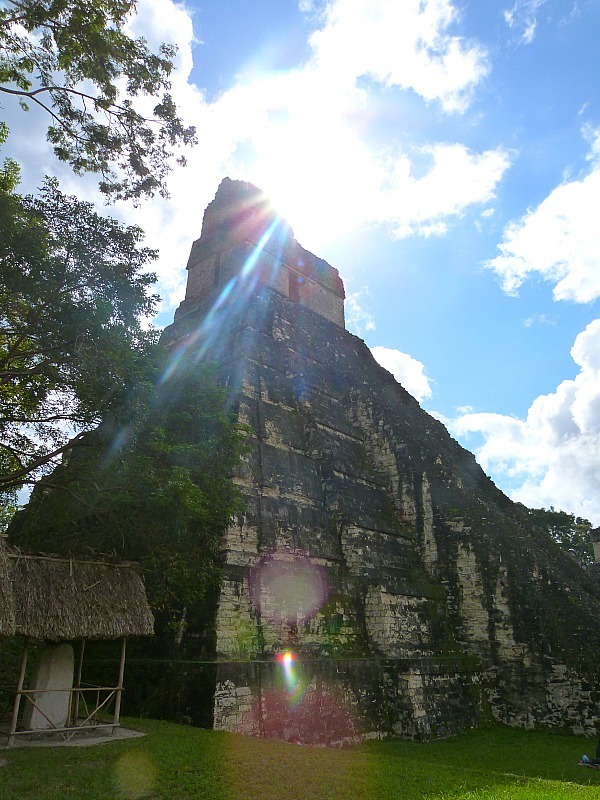 Well they got what they wanted.

About 20 minutes later the heavens opened with some of the heaviest rain I have ever seen in my life! We ran for the only shelter we could see, a small overhang amidst the ruins.

There was already a small Guatemalan worker in there and we were joined later by young Canadian/US friends and another couple from California. 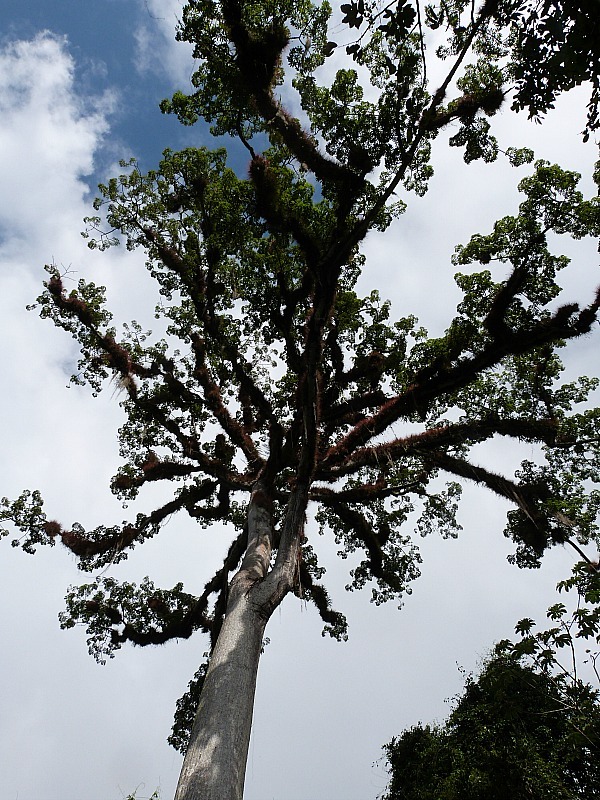 We crammed ourselves into the small space and had an hours worth of energised conversation while the rain raged around us.

The Californian couple announced that they were marrying themselves at 12.12pm and after leaving our hidey hole, they rushed off to get ready and find a private shelter.

We gave up waiting for the rain to stop and decided to brave it, visit the tallest temple in the complex, Temple IV, then leave. We ran into the couple again just after they had ‘got married’ and I took their wedding photos.

The top of Temple IV was deserted and the view over the jungle with the tops of other temples poking out was an indescribable and poignant sight in the pouring rain.

The next day after a very long, bumpy and expensive van ride including a short vehicle ferry across an un-bridged river, we arrived at Semuc Champey, a series of clear blue waterfalls which is lauded as the ‘most beautiful place in Guatemala’. 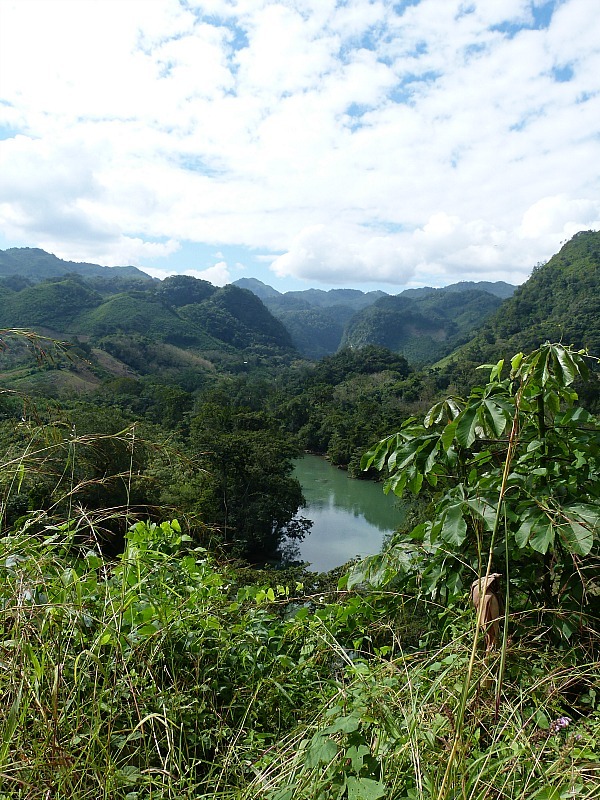 We decided to travel to Semuc Champey without a tour and we stayed at Casa el Zapote. We were promised a free night accommodation through our rip off shuttle company but it turned out to be for dorm beds only so we paid the difference to stay in a private room.

Very basic accommodation; rickety building that swayed when anyone moved, massive gaps in the walls to let in mosquitoes and cold showers.

Despite this the people were nice and we were within walking distance to the waterfall and pools so we didn’t have to pay for an expensive tour to get there. When it got dark there were hundreds of fireflies out the front, pretty magical. 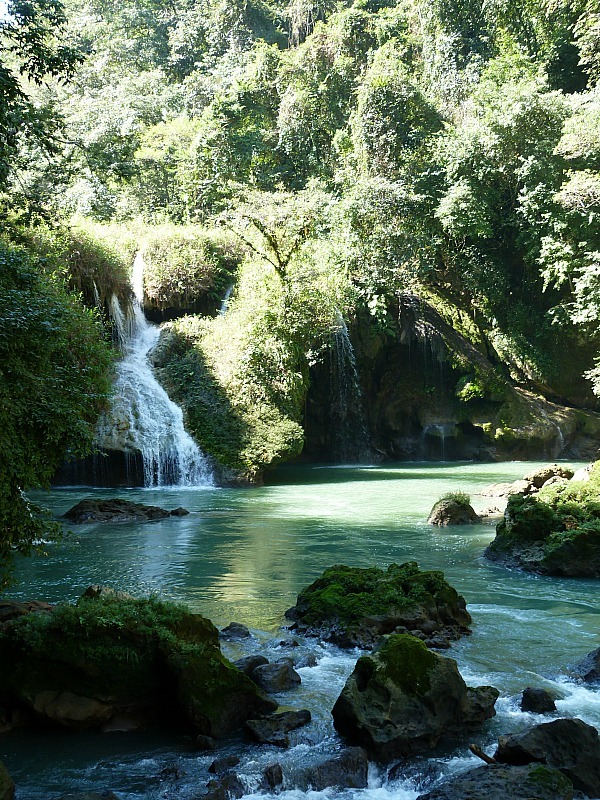 We spent the next day at Semuc Champey, it took us about 45 minutes to walk the 2.5km and it was a beautiful walk although quite hilly. It is indeed a very beautiful place.

Cascading waterfalls and clear pools to swim in, very similar to Agua Azul in Chiapas, Mexico but you can swim anywhere you want.

We had a lovely day swimming and also walked up to a view point over the falls where we bumped into our friends Simon and Jakub whom we met at Lake Bacalar. 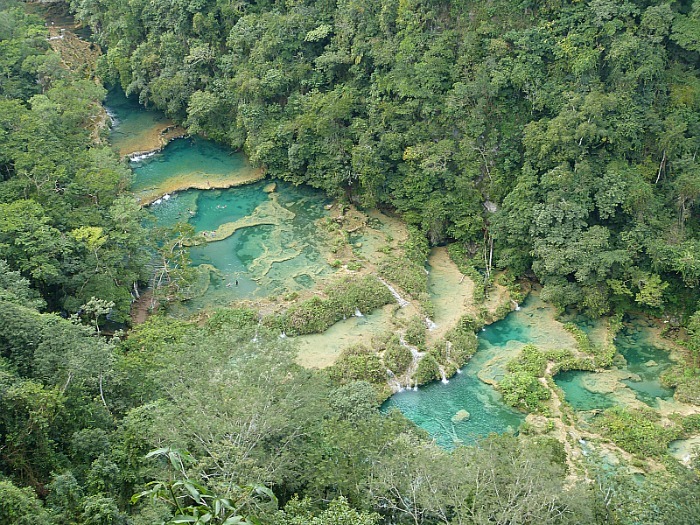 On the way walking back some small children approached us and wanted money or sweets. When we didn’t have anything to give them they threw stones at us – little shits. We had a very early departure the next day to Antigua.

We enjoyed our short time in the Peten province of Guatemala but it would have been nice to have had longer as there was too much time spent on long, uncomfortable bus journeys.