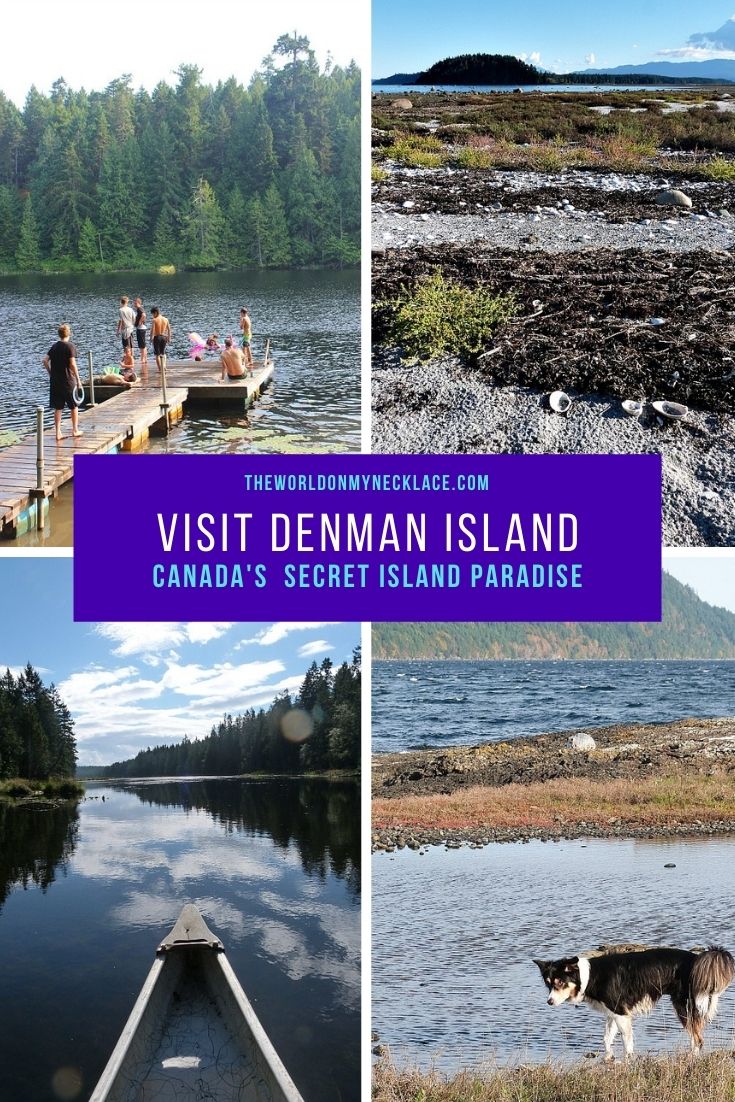 Planning a trip to beautiful and peaceful Denman Island this summer? Then read on to find out the best things to do on Denman Island and much more…

The first time I visited Denman Island I knew within days that it was special.

Like with people, some places you just click with straight away, and Denman Island was one of those places for me. It is one of my favorite places in the world, along with nearby Vancouver, and somewhere that I left a piece of my heart.

I spent 2.5 weeks volunteering on a hobby farm on Denman Island through Help X in 2013 and loved my experience, my host, and the island. I knew that I had to return to Denman Island on this trip through Canada.

Denman Island is a small island located in British Columbia’s Northern Gulf Islands. Home to a small and close-knit community, Denman Island is abundant in natural beauty with stands of temperate rainforest and a rocky shoreline teeming with life. 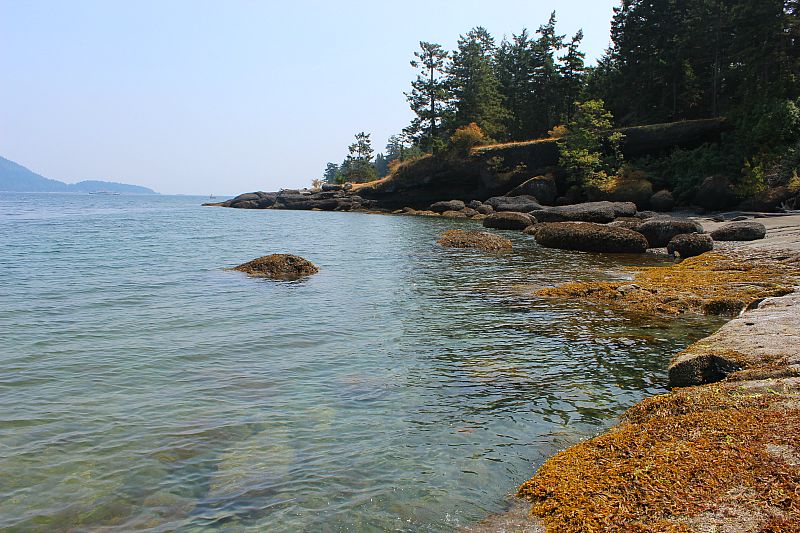 Denman Island is largely overlooked by tourists who prefer to head to the white sand beaches of Hornby Island, one island over, only briefly driving over Denman Island to catch their onward ferry.

I think this is such a shame, they are missing out on so much by not giving this little island any time.

After a fairly disastrous time on Hornby Island, I headed back to my happy place a day early – Denman Island. Being back on the island was very familiar and comforting; a safety blanket enveloping me in its folds.

Denman Island had a different feel to it compared to when I had spent time there in autumn a couple of years ago; there was a freshness in the air.

Nature was flourishing, at its peak, when last time it felt like things were shutting down for winter. The light was different, the air was different. Everything felt lighter.

As I had arrived a day early, I hadn’t been able to get hold of my friend David so I decided to spend a night at the Denman Island Guesthouse and Hostel. I had my own little cabin in the backyard of the main house. 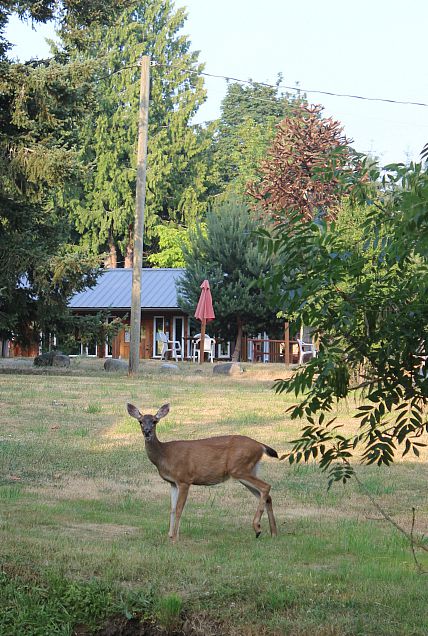 I felt a great weight ease off me as I took off my bags and placed them on the dusty wooden floor. Leaving Hornby Island early had been the best decision I could have made.

The guesthouse was rustic and peaceful, perfectly in sync with the Denman Island vibe. I went for a walk through the tiny town center which is made up of a cafe, a general store, a hardware store, a church, an art gallery, and the school. Everything you need.

A lone deer watched me from a grassy front lawn as I passed by. Denman Island has a massive deer population. They are a nuisance here but I still get a kick out of seeing them wandering the streets.

Everything was closed up and quiet. The wooden buildings were beautiful, bathed in the light of the magic hour before sunset. 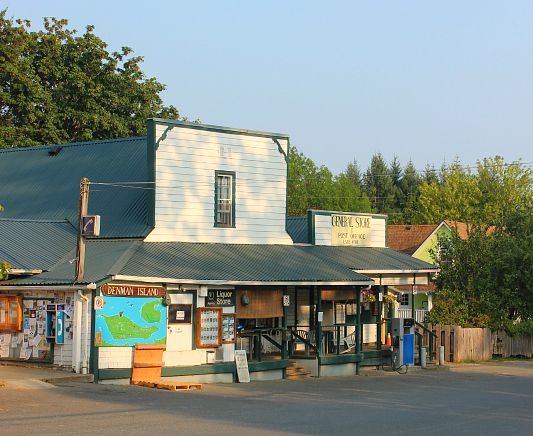 I was in such a rush to catch the last Denman Island ferry from Hornby to Denman, I hadn’t had time to get anything for dinner and on these small islands, everyone shuts up shop early.

Luckily I had some rice crackers and peanut butter in my bag. A meager dinner but it was better than nothing.

I ate out on my front deck, a local cat winding its way around my legs and trying to eat the peanut butter from the open jar. 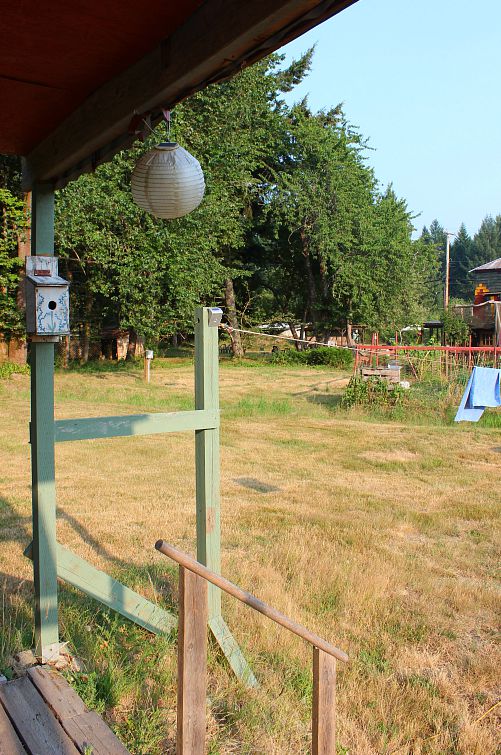 After a sleepless night the evening before, I slept the sleep of the dead in the quiet of the cabin.

I spent the next morning online and people-watching in the bistro. Sun was streaming through the windows and everyone had a smile on their faces. After feeling so alone and invisible on Hornby, I felt like I was part of the world again. I didn’t speak to anyone except the waitress but I felt included.

Nearly everyone that came into the bistro while I sat there was local and pretty much everyone knew each other. I even saw a couple of familiar faces from when I was last on Denman Island.

Hornby Island has so many visitors that descend there en masse in summer that you don’t get that local flavor at all.

I finally got hold of David on Skype, grabbed my bags then stuck my thumb out for a ride to his place, on the other side of the island. I got a ride almost immediately with a lovely local lady who is the caretaker for the Fillongley Provincial Park camping ground.

We stopped off at Fillongley on the way so she could check the sites. I walked down to the long pebbled beach while I waited. The water was as still and clear as glass. I paddled in the cool ocean, wishing I had worn my swimsuit. 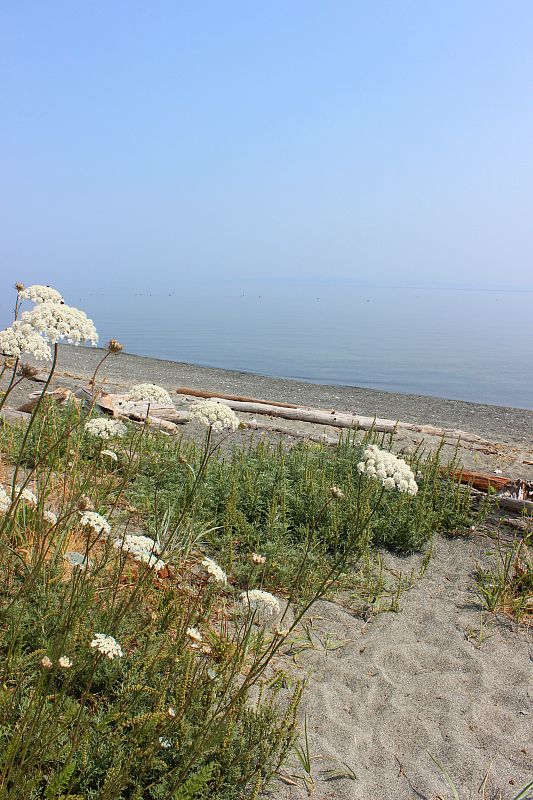 Waves of familiarity washed over me as I walked up David’s driveway to the house and saw his dogs, Tippy and Skipper. Skipper wasn’t fazed but Tippy stared up at me for a while then got really excited and ran over. I swear I saw recognition in his eyes.

David came out with a couple of beers and we caught up, overlooking the marsh at the back of his property. It was so good to be back! 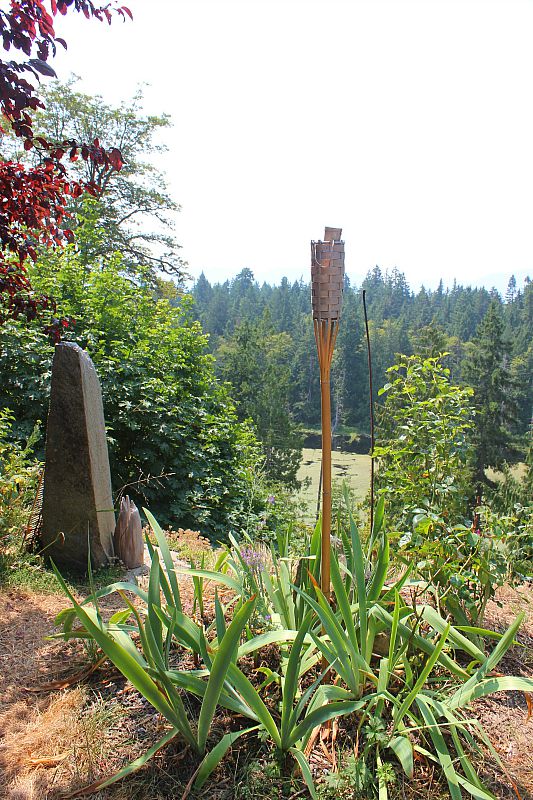 While David finished fixing his kitchen sink, I took the dogs down to the beach, a few minutes walk from the house. It bought back great memories of all of the time me and Trav spent down there, going for long walks, playing fetch with Tippy and collecting shellfish off the rocks.

I saw a bald eagle soaring above the rocky coastline, the first of this trip. It felt like a sign that I was where I was meant to be.

David and I drove into town and I treated him to lunch back at the Bistro, washed down with homemade berry lemonade. Sitting outside in the shady back garden, we joined a couple of David’s friends, one who I had met when playing volleyball the last time I was back. Another familiar face.

One of the reasons Denman Island is so special is because of the people. And the community spirit that brings them all together.

Back at the house, we picked up Max, David’s quiet Help Exchange volunteer from France, then headed for Graham Lake for a dip. There are two large swimming lakes on the island, Graham and Chickadee.

I visited the three Provincial Parks on Denman Island during my last visit but I still hadn’t made it to either of the lakes.

A short hiking trail through a second-growth forest led down to the inviting waters of Graham Lake. A wooden dock jutted out into the water, built and maintained by the local community and a popular meeting spot in summer. 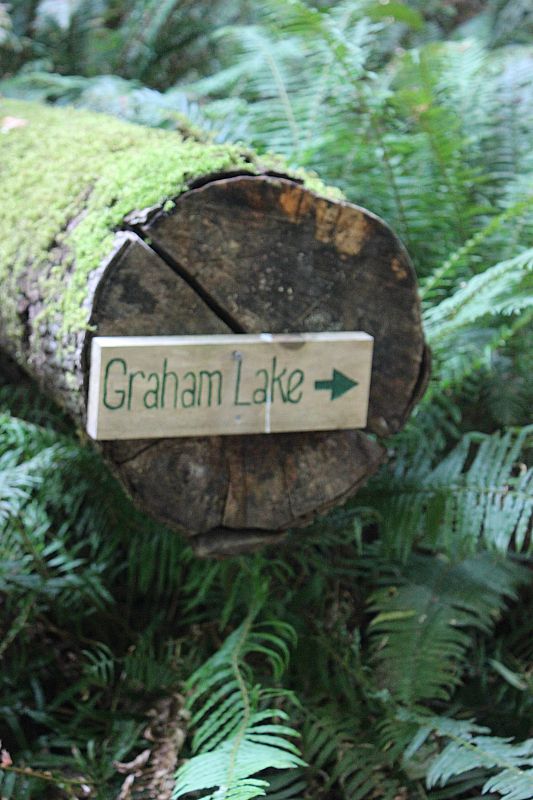 The water was cool but refreshing, the perfect temperature on a hot summer’s day. I spent a couple of hours alternating between floating in the lake or drying off on the dock, talking to friendly locals who had congregated at the lake for a lazy afternoon in the sun. It was bliss.

The dogs were loving it too, especially Tippy who fetched a stick constantly, swimming out into the lake over and over again. It was harder to get Skipper interested but he did end up going for a dip a couple of times. I love how different the dogs are despite being father and son. 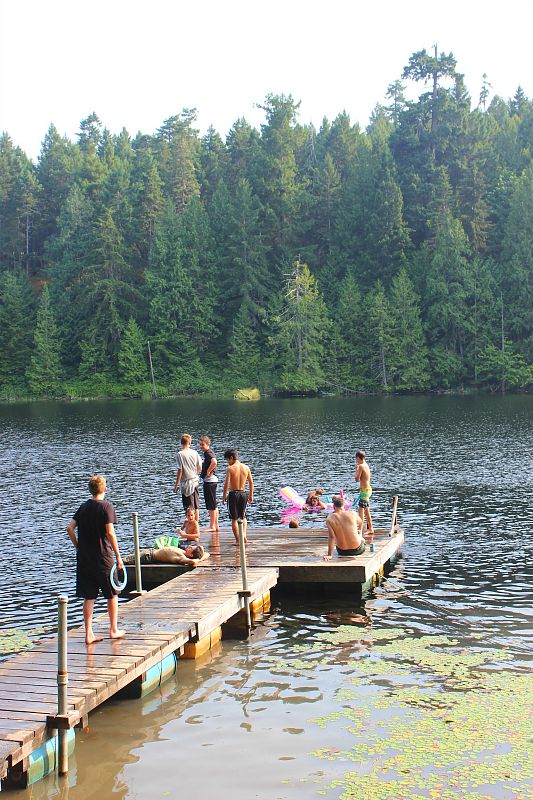 My perfect island summer day ended with a home-cooked meal eaten outside overlooking the marsh as the day cooled into night.

David and I watched a movie then I retired to the upstairs room, usually David’s daughter’s but she had relocated to the cooler ground-level room for summer. A smart move. It was roasting up there but you can’t beat the views. 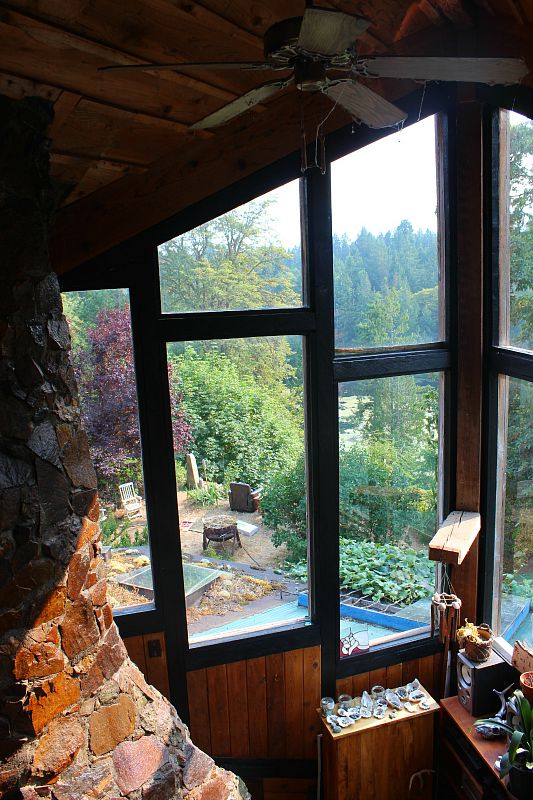 Tippy decided to join me and although I am not a fan of having dogs in bed with me, he was persistent and as I couldn’t physically move him, he stayed. Despite having an unhealthy cat obsession, I truly love that dog.

After coffee on the sunny front balcony in the morning, overlooking the sea and Hornby Island, it was the end to my short visit. Too short. 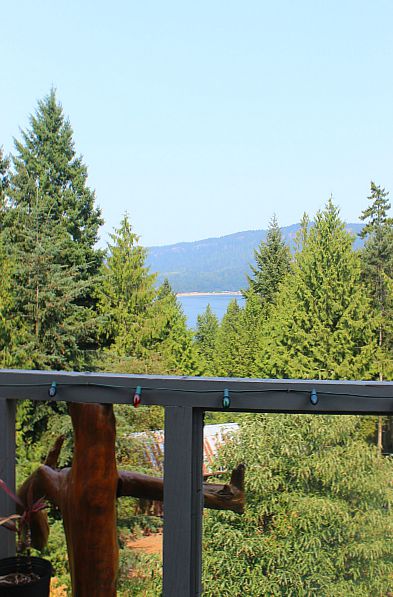 David’s friends were driving me to Courtenay where I was catching the bus down to Victoria in the afternoon. But I wanted to stay.

I hugged David and the dogs goodbye with tears in my eyes. It felt wrong to be leaving so soon but I had already organized my Victoria couch surf and as I was flying to Alaska in a couple of days, I was short on time.

I know I will return to Denman Island again one day. How could I not?

It is one of my homes after all.

Plan Your Trip to Denman Island

Best Things to Do on Denman Island

Denman Island has lots of fun outdoor activities to partake in during summer: 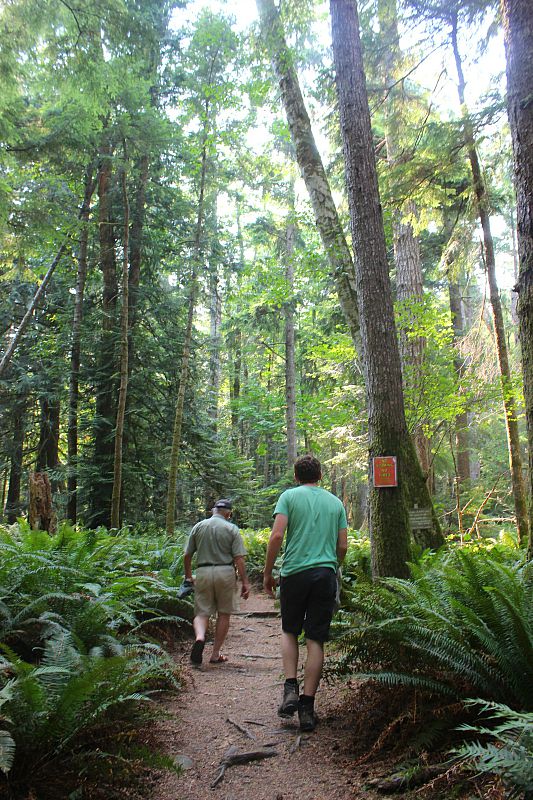 Where to Stay on Denman Island

If you are traveling on a budget, your best bet is to stay at the excellent Denman Island Guesthouse and Hostel which has affordable private rooms and dorms, or camp at beautiful Fillongley Provincial Park. Book in advance if you can because there are only ten sites.

For something a bit more luxurious, stay at one of the self-contained units at oceanfront Manna House or this oceanfront one-bedroom cottage on a peaceful beach.

If you have more time than money and are open to trying something new, you should consider doing a help exchange/volunteering through Work Away, Help X, or WWOOF.

This is a great way to experience life on the island by staying with a local. You are expected to work for around 5-6 hours per day for 4-5 days per week, and you usually get room and board for this. It’s a great way to “live” on Denman for really cheap. 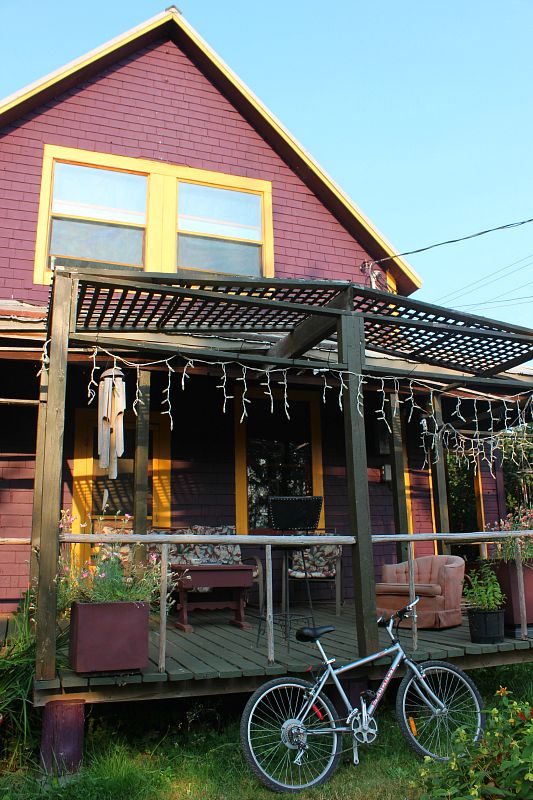 How to Get to Denman Island

If you don’t have a car, you can catch a train to the city from the airport, then catch the bus to Horseshoe Bay. From there, catch a regular ferry to Nanaimo and then catch the Island Link bus (make sure to book online in advance) to Buckley Bay, and catch the ferry to Denman from there.

Once you are on Denman, the best way to get around if you don’t have a car is to hitch – it is very common here and it’s likely you won’t wait long for a ride.

The Best Travel Insurance for Your Trip

If you are traveling from outside of Canada, make sure you get travel and health insurance before your Denman Island trip, just to be on the safe side. Safety Wing is my go-to and they are cheap and easy to claim with.

Have you ever been somewhere that feels like home to you? Do you think Denman Island could be a home away from home for you too? 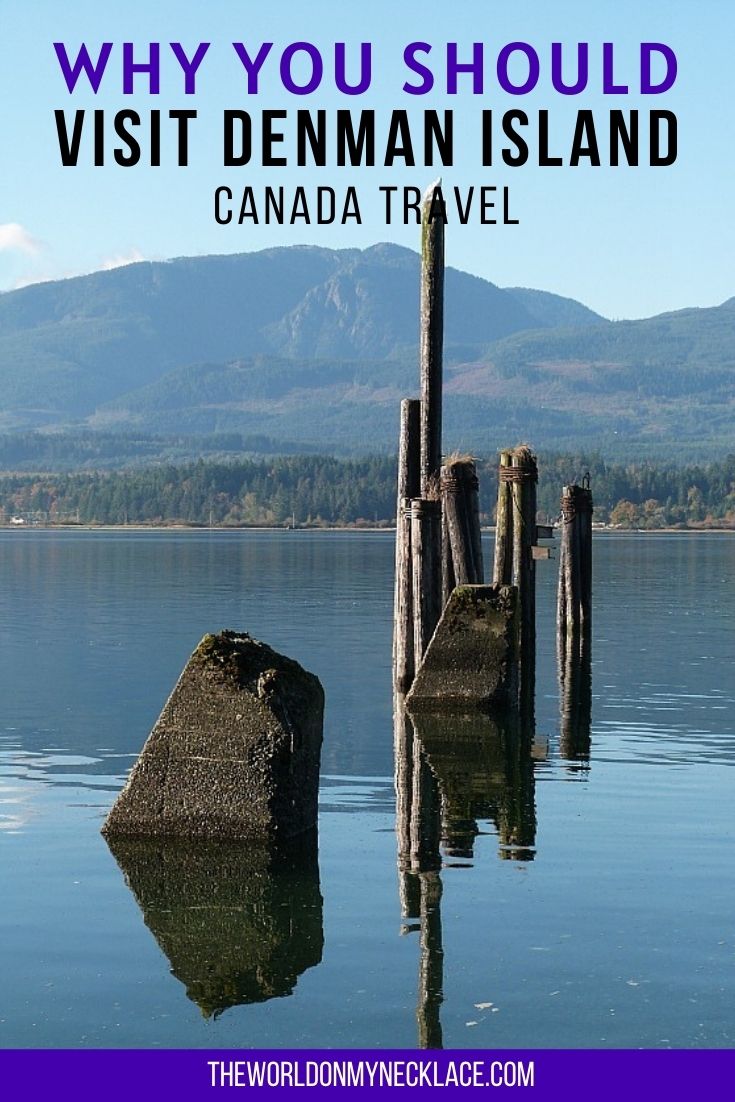 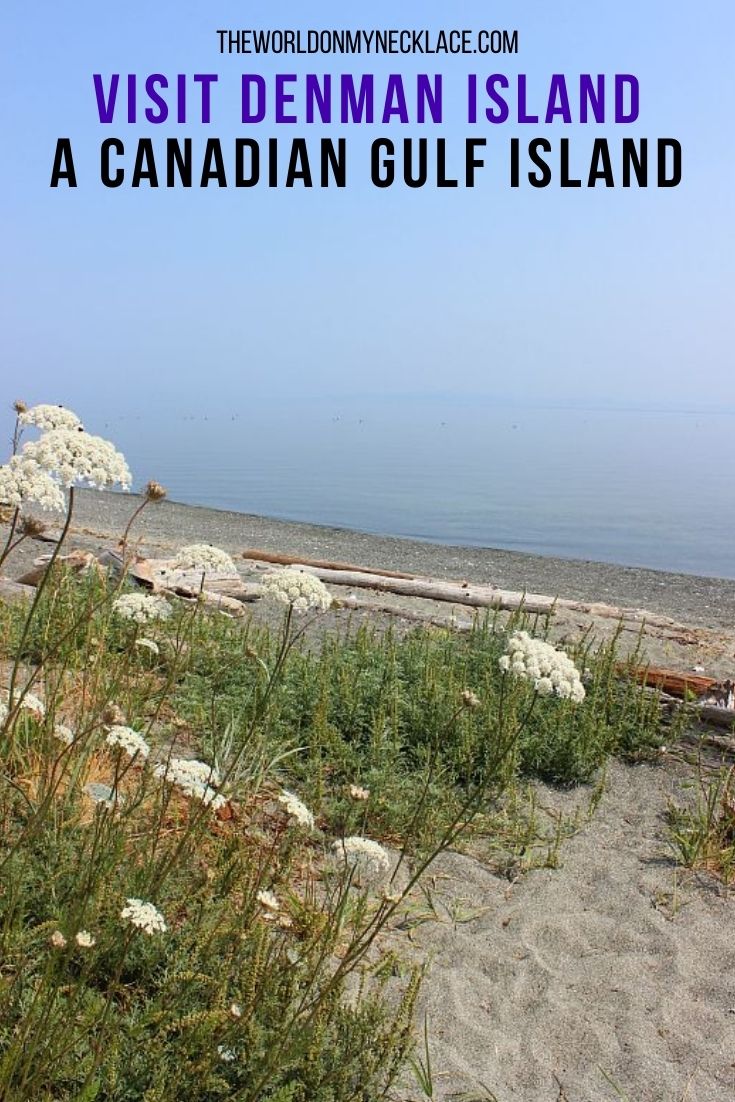 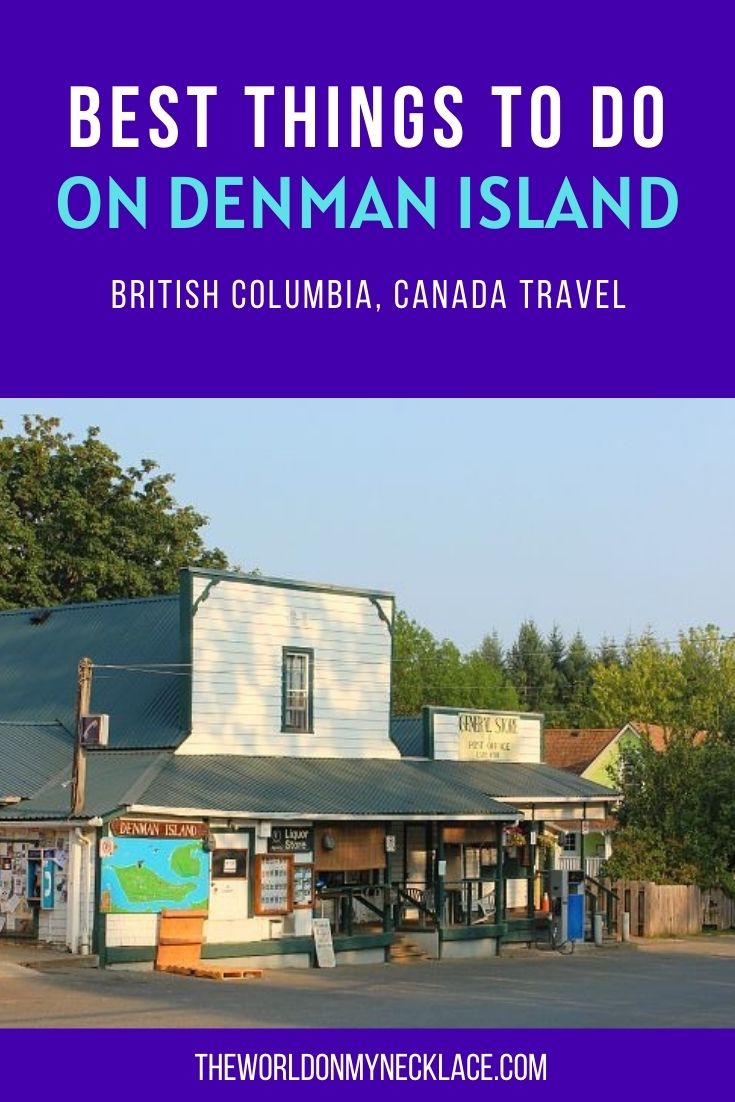