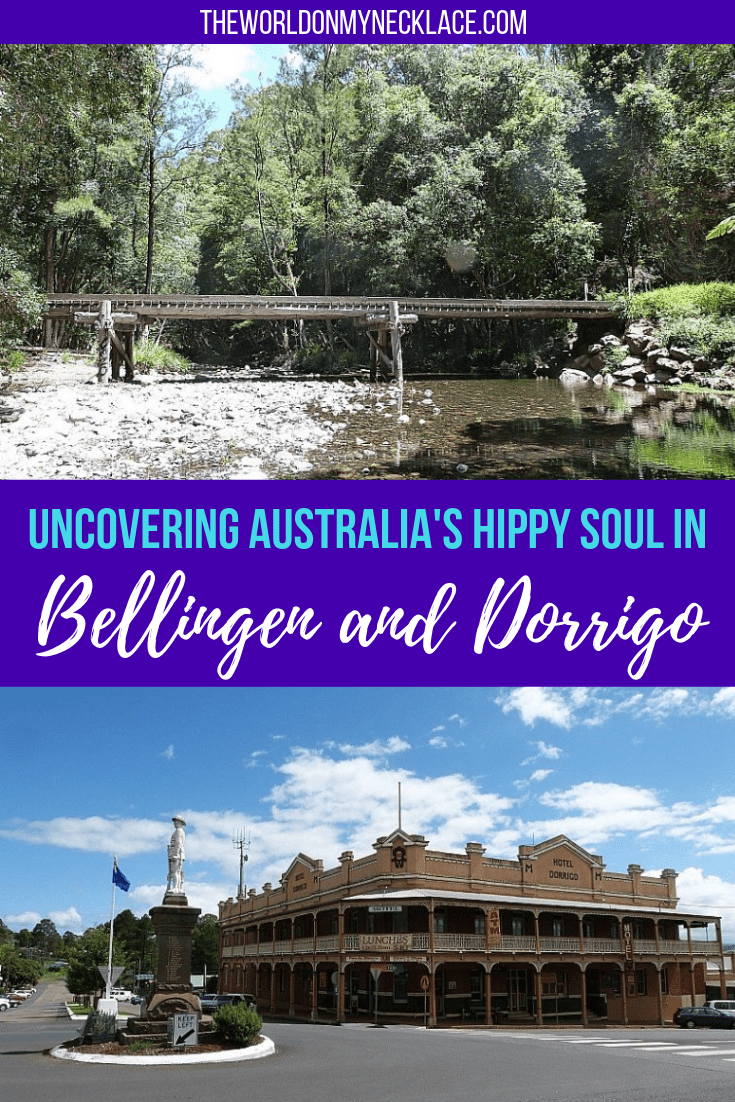 Moving to Sydney mid-January this year, I knew that it wasn’t a great time to be starting the job hunt. Still being school holidays and only a couple of weeks out from Christmas, there were still a lot of people on holiday.

I’m lucky to have a lot of friends living in Australia, specifically New South Wales, so with the ridiculously cheap mid-week Tiger flights,  I decided to spend a few days with a couple of good friends of mine, Michael and Garry, who live inland from Coffs Harbour, on 40 acres of land near the small town of Bellingen.

I met Michael back in London in 2006 when we worked together at a venue as Event Wait Staff. We stayed in touch and when we both happened to be living in Vancouver in 2009, Trav and I got to meet his partner Garry too.

We hung out in Vancouver with these guys a lot and even attended their beautiful wedding overlooking Third Beach in Stanley Park.

They moved to Australia in January 2010, just before we also left Canada, to return to London. I hadn’t seen them since then so I was so excited for this long awaited catch up!

They picked me up from the bus station at Urunga, just south of Coffs Harbour, after a long bus ride from Coolangatta where I had been visiting another good friend of mine for a few days.

There is nothing better than catching up with good friends after years apart and I got to finally meet their gorgeous dog Comet, who is possibly one of the best natured dogs in the world. 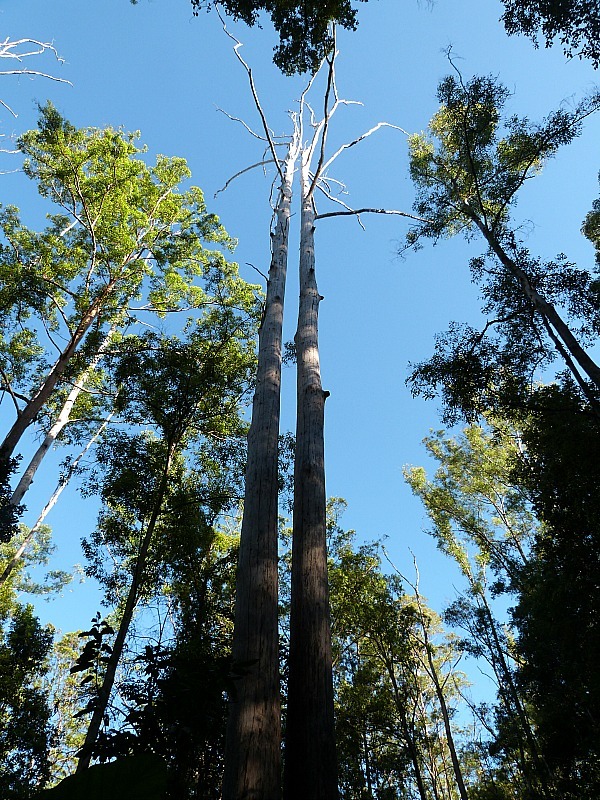 As we made our way inland, the surroundings becoming greener and denser as we drove. There were so many trees. Driving the windy country roads, there were hardly any other cars around.

We passed little creatures on the side of the road called pademelons – similar to wallabies. I had never even heard of them before. The amount of indigenous wildlife in Australia is mind-boggling. 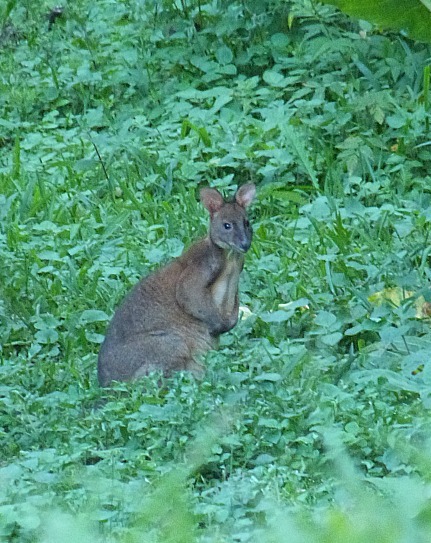 Their house, known as ‘Treetops’, is an architecturally designed mud brick masterpiece, with exposed wooden beams, open plan living, split levels and a gorgeous kitchen. They even have a composting toilet!

Surprisingly, it didn’t smell at all (a very pleasant surprise). It was weird not flushing but I can imagine that is something you would get used to.  Composting toilets are such a great idea and an environmentally responsible way forward. 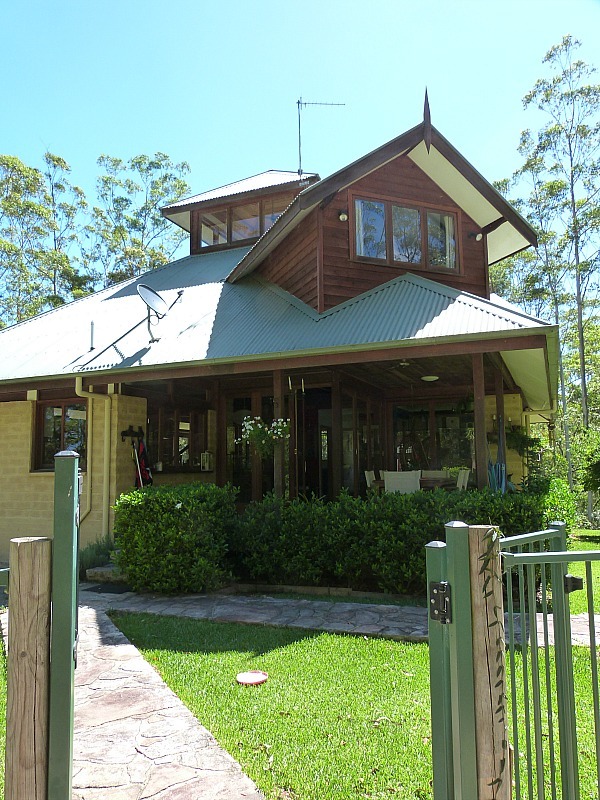 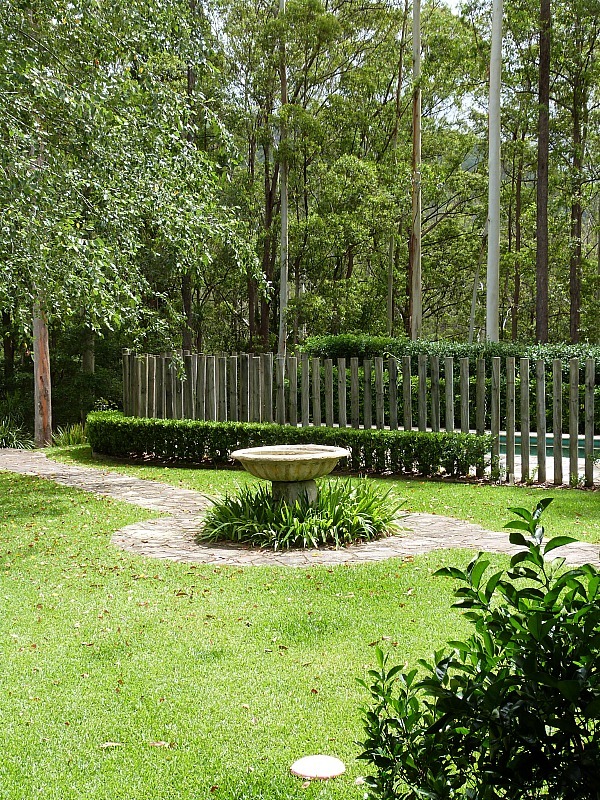 Michael and Garry showed me around the property. They have a very inviting pool as well as a tropical fruit orchard, elaborate vegetable garden and even a round house studio next to the main house. 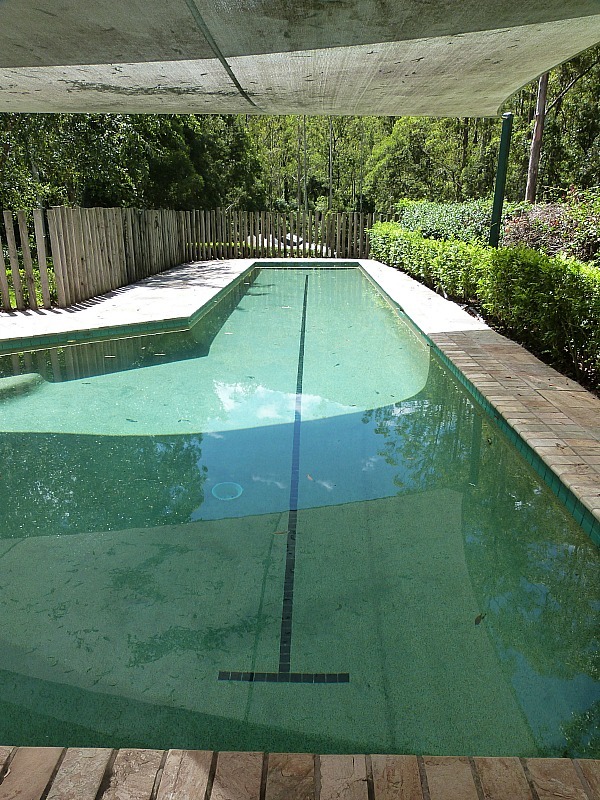 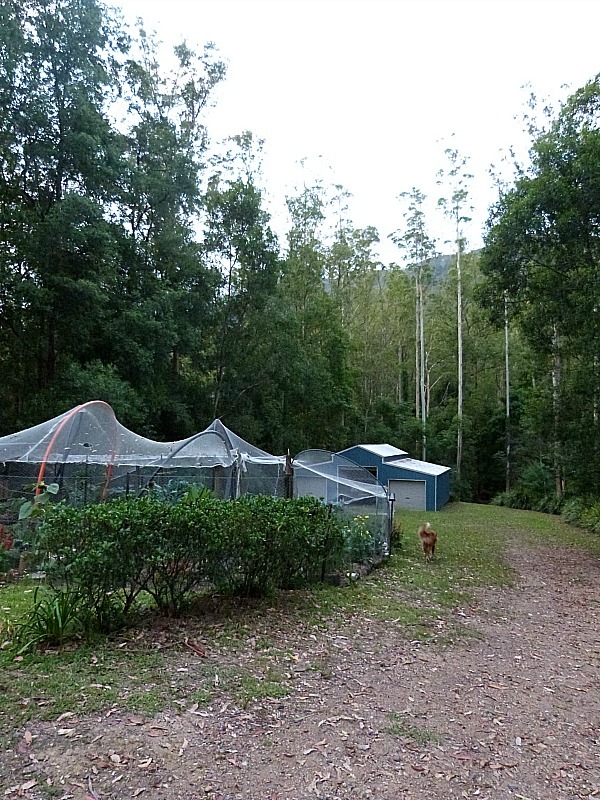 Michael is an incredible cook and he prepared us a gorgeous vegetable lasagne with ingredients fresh from the garden that we enjoyed on the candle lit deck as the sun went down on my first night.

We ate on the deck for every meal that I had at Treetops and it became my favourite place in the house. The stars were bright and numerous and I was enthralled by the sounds of the rainforest at night. There were so many different bird calls and animal sounds. The night was alive with their chattering. 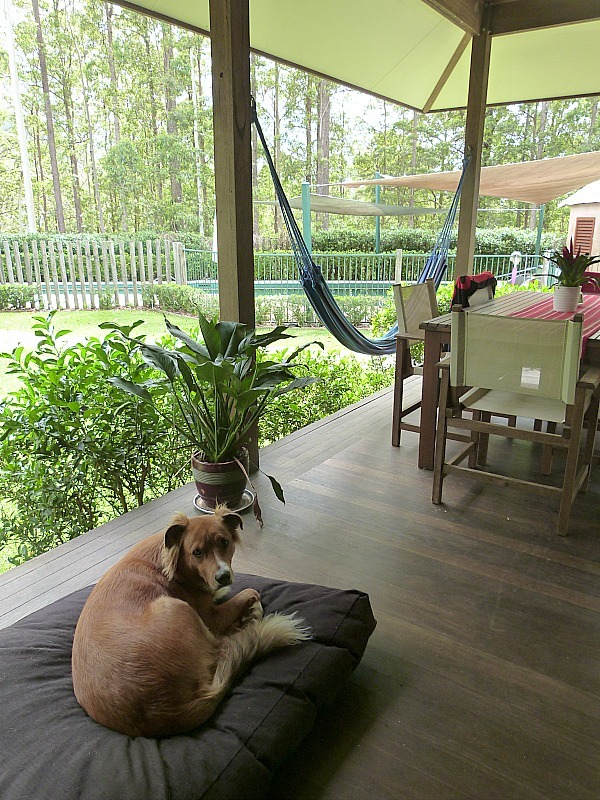 There is so much nature here. 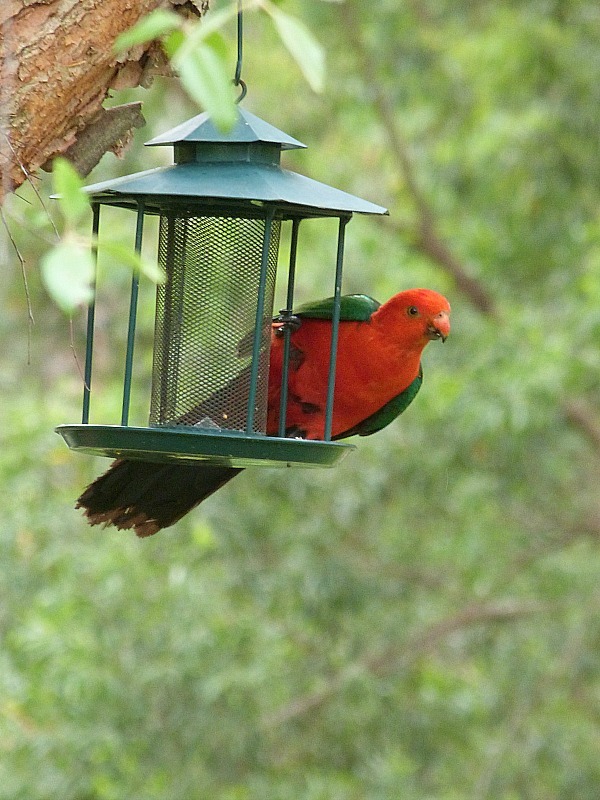 During my three day stay I saw so many different types of colourful birds, crazy insects, lizards, a giant toad that had found its way into the bathroom, cute little pademelons and even a bandicoot, albeit a dead one. It drowned in the pool despite Michael trying to save it.

Thankfully I didn’t see any snakes and spiders but apparently I only just missed seeing a gigantic Huntsman in the bathroom one morning, with Michael and Garry managing to herd it outside before I came downstairs. 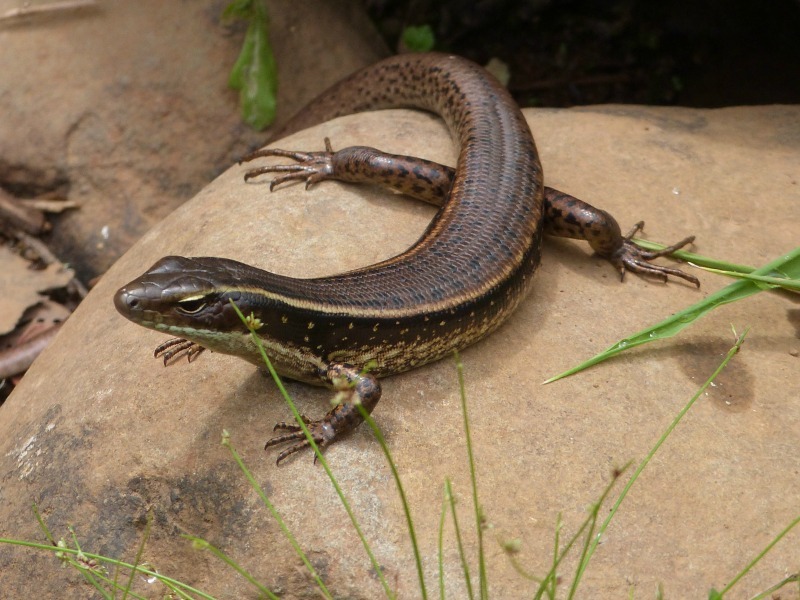 Treetops was positively one of the most relaxing places I have ever been. I spent a morning reading my book on the deck. I swam in the lap pool with Comet chasing me around the side. I sunned myself poolside and felt the worries of my job search drift away. 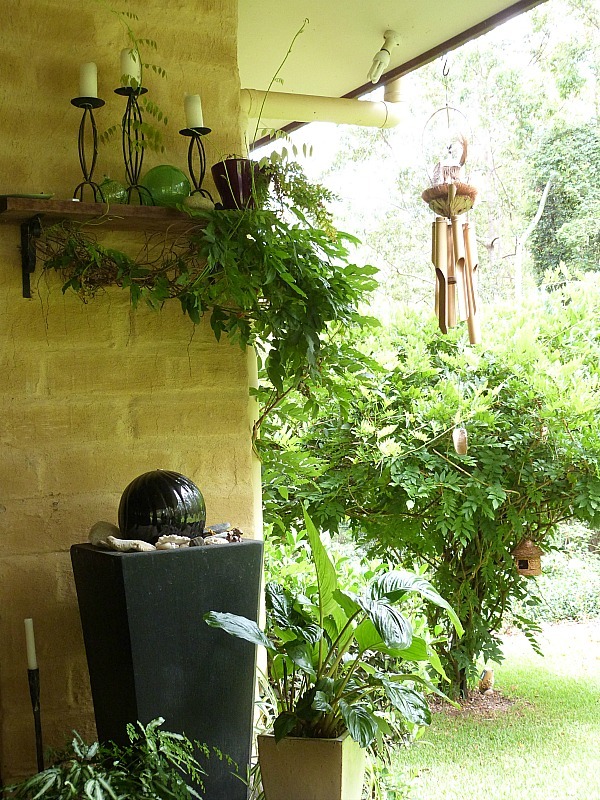 But I didn’t just laze around all day. I managed to fit in a fair bit of exploring too.

Garry took me to Dorrigo National Park, an abundant wonderland of World Heritage listed subtropical and temperate rainforest that is home to an enormous array of protected species.

The rainforest here is part of the protected Gondwana Rainforests of Australia, which includes the most extensive areas of subtropical rainforest in the world. This incredible place is relatively unchanged from when Australia was separated from Gondwana between 40 – 80 million years ago. 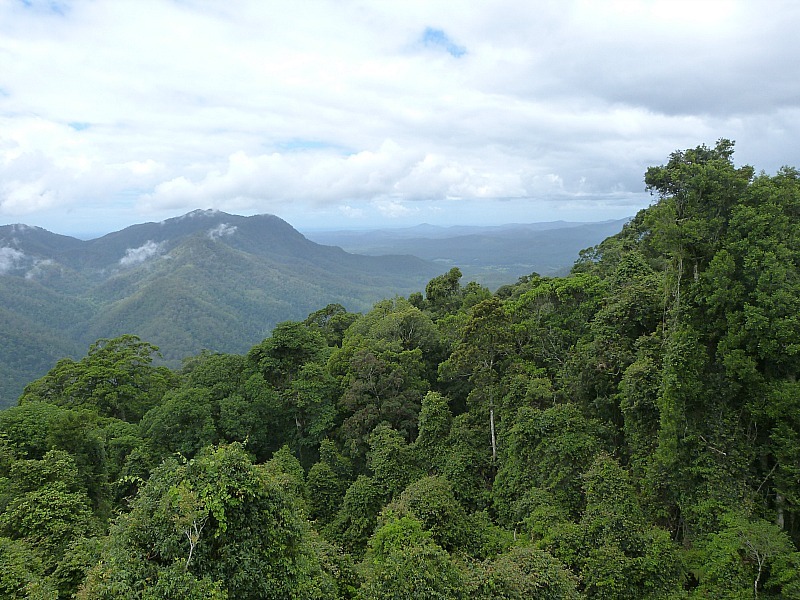 After checking out the small museum in the Information Centre, I walked to the end of the Skywalk, a platform extended over the valley and forest, for a stunning view over the dense, green hills. 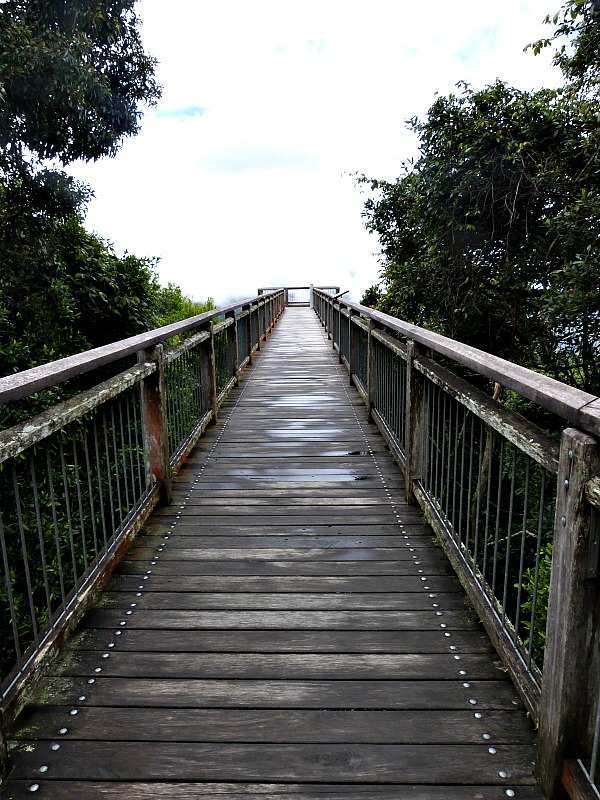 It is a spectacularly lush, green place. Australia’s varied landscapes continually surprise me and they attest to the massive size of the country that you can find practically every type of environment within it.

There are a lot of waterfalls around Bellingen and Dorrigo and the road that links them to Coffs Harbour to the east and Armidale to the west is known as the Waterfall Way. We visited one of the famous waterfalls located within Dorrigo National Park – Dangar Falls.

Dangar Falls is a gushing wall of water that drops 30 metres over a basalt cliff to the olive coloured waters below. We walked the short path down to the pool. I imagine it would be a pleasant place for a swim on a hot day.

Comet entertained himself by playing his favourite game, rocky rock, in the shallow waters. This involves him trying to dig large rocks out of the water. Gotta love dogs and their crazy antics. 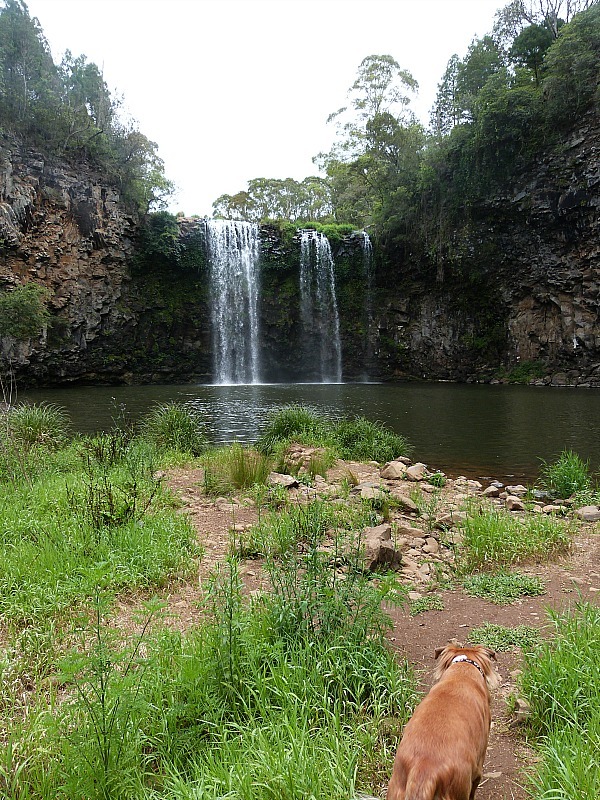 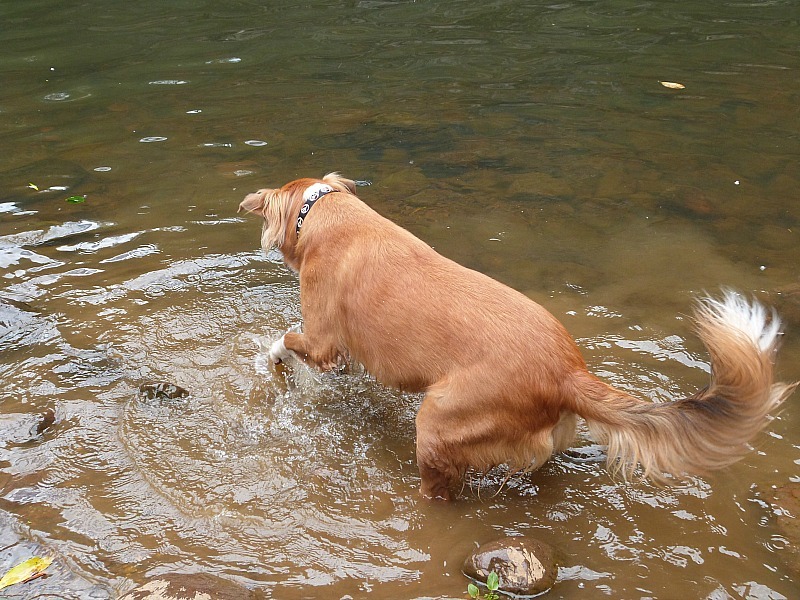 Dorrigo town is a mixture of the old and the new – beautifully preserved historic buildings alongside trendy but unpretentious cafes, serving up incredible coffee and delicious meals. After a coffee break at one of the al fresco cafes which also doubled as a bookshop, I visited the local Museum. 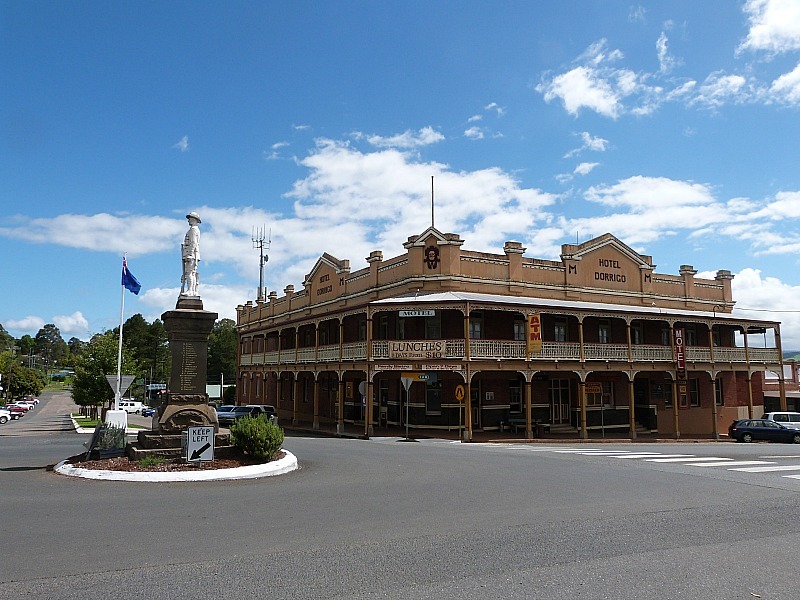 The exhibits were a higgledy-piggledy assortment of old photographs, farming equipment and everything in between. I chatted to the curator who is a very friendly local with a passion for local history.

I wandered the trail down by the chocolate coloured river, I browsed in the shops and I sat on a bench lost in thought. I was going slow and it felt good, although not entirely natural to this fast mover and talker. 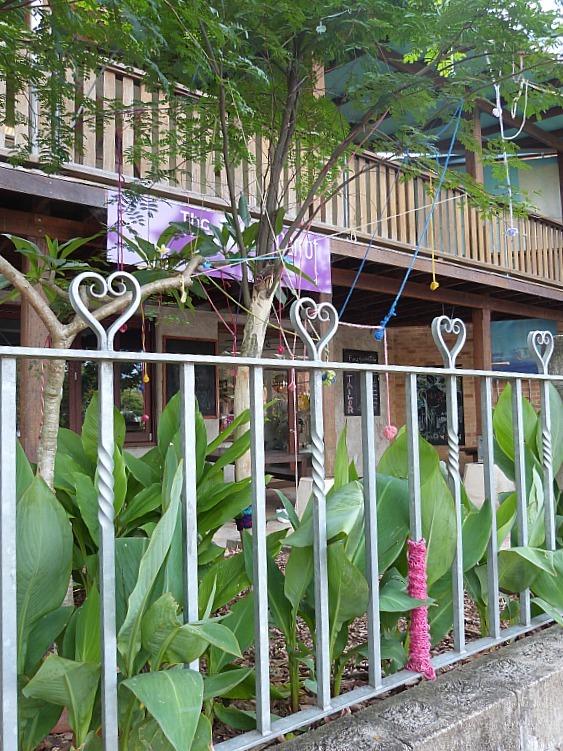 In the Aussie naming tradition of shortening names and adding an ‘o’ to the end, Bellingen is affectionately dubbed Bello for short. It has an almost Deep South USA feel to it; The dark olive green of the jungle like vegetation, vines hanging from large trees with twisted roots snaking above the ground.

A hint of darkness from the lack of sunlight filtering through the dense trees. Despite this, it has a surprisingly vibrant energy. 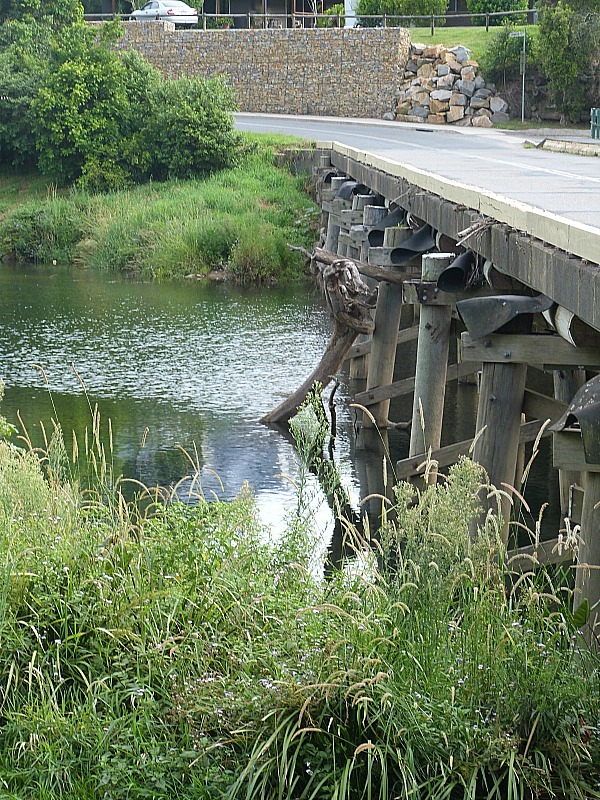 There is definitely more of a hippy flavour to Bello compared to Dorrigo. It could just be another sleepy, historic town – beautiful but perhaps not so exciting – if it wasn’t for the colourful residents. People watching here is at its best. Grab a window seat at one of the majestic pubs or a trendy cafe, and you will be spellbound for hours. 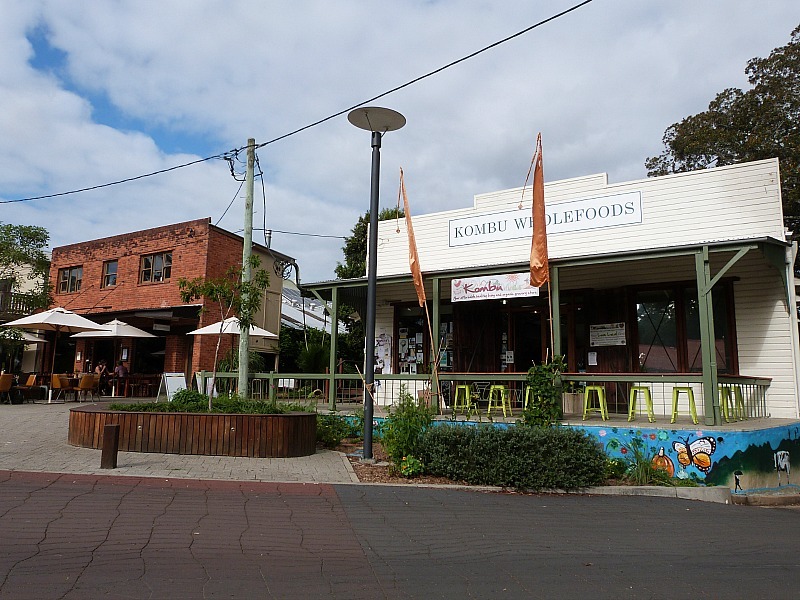 One afternoon we drove out to the Promised Land: An area of pastureland located in the Glennifer Valley north-west of Bellingen. This land truly would have been the promised land to farmers who were enticed here. The fields are so luxuriantly plush and green that it reminded me more of Canada and New Zealand than Australia. 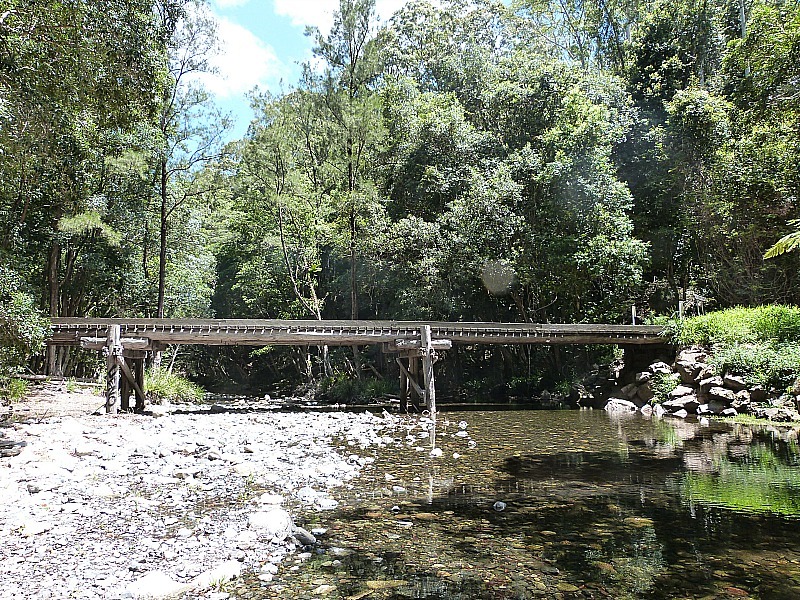 We walked the bridge over the crystal clear Never Never creek. The only sound was the gurgling water and the wind in the trees. 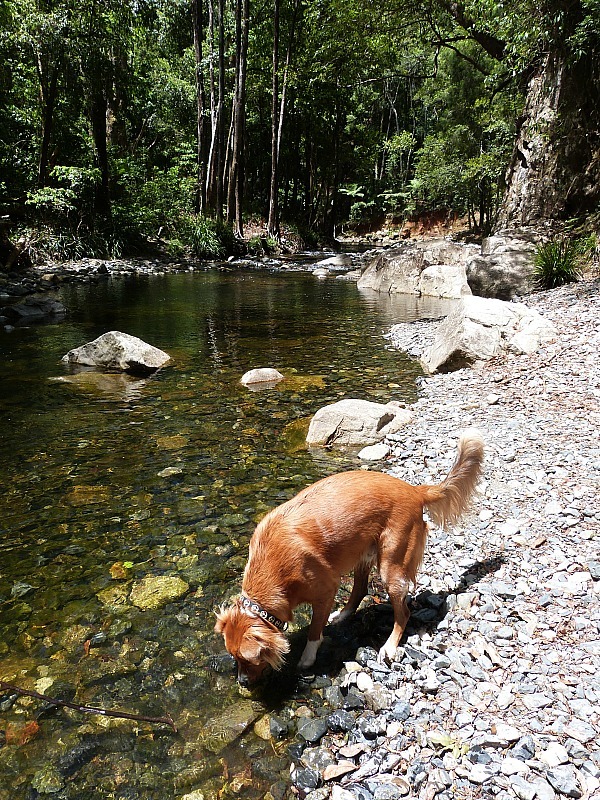 Back at Treetops, we hiked some of the trails around the property. Micheal and Garry are keen environmentalists and know so much about the flora and fauna of the area so I learnt a lot about the many ferns and plants that we saw.

Some shy pademelons watched us from a distance. They told me their plans to create a meditation area amidst the rainforest and in the long term to have small dwellings for visitors throughout the forest. It all sounds so wonderful. It is what I dream for myself – one day. 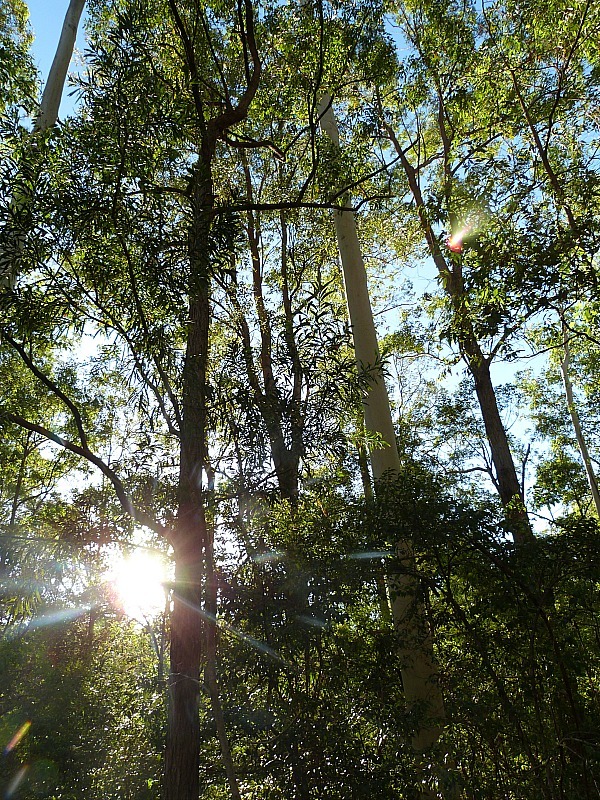 On my last day, Garry took me into Coffs Harbour for a look around before my flight out in the afternoon. We walked along the quiet beach with Comet. We saw a manta ray and a turtle swimming in the harbour and walked out to Mutton-bird Island through the Marina. 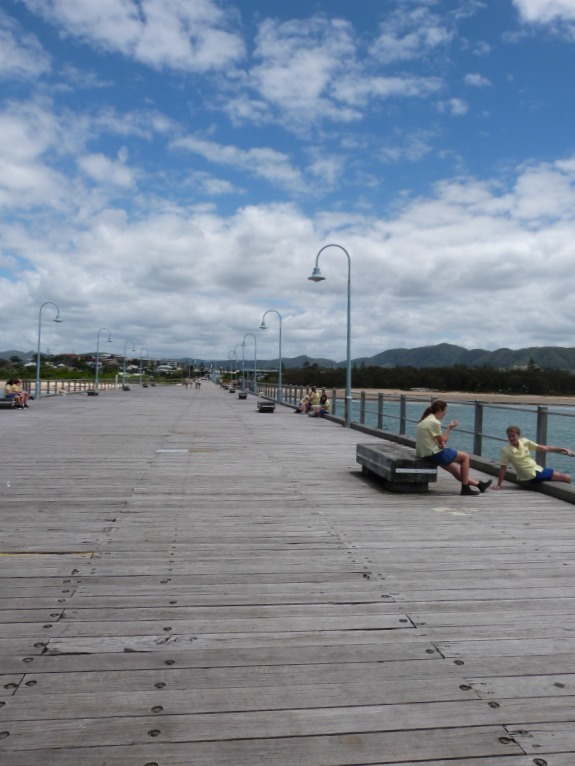 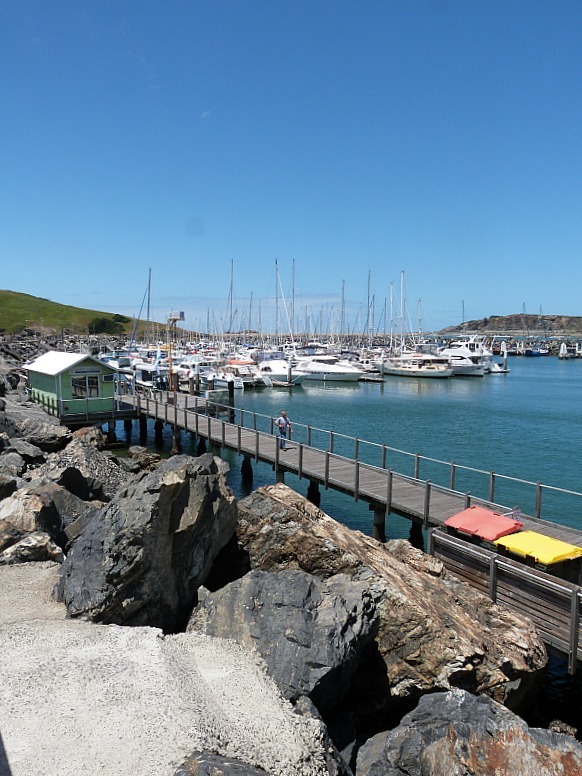 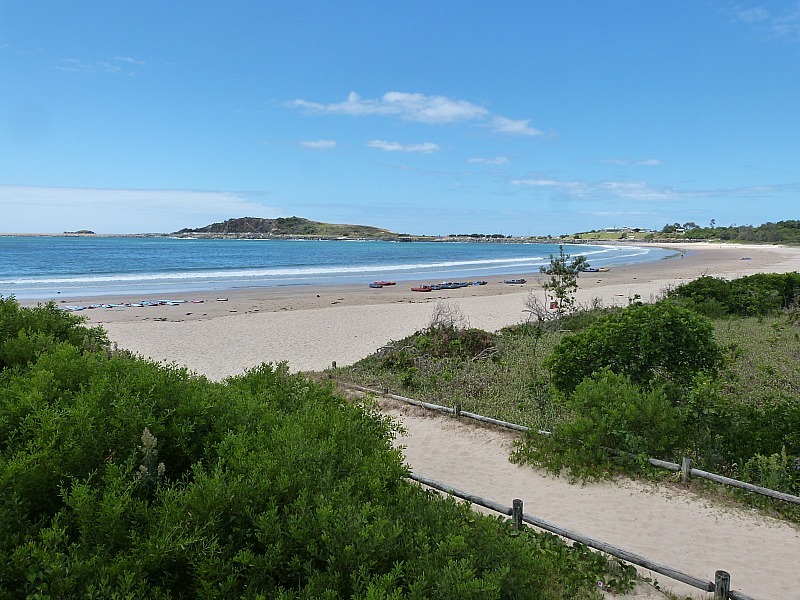 I only saw the watery attractions of Coffs Harbour but I really liked what I did see. 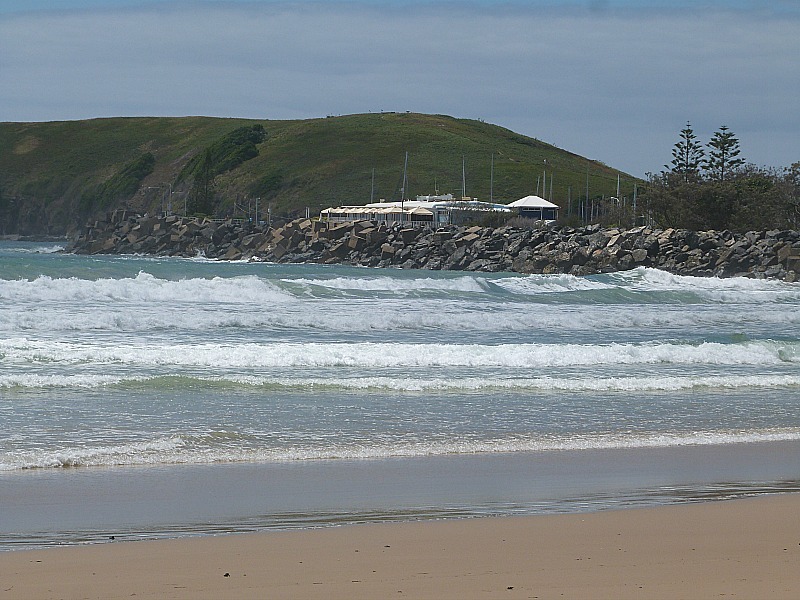 It was a short but sweet visit to the Coffs Region but I came away feeling revitalised and inspired. Good food, great company and nature at its prehistoric best made my time there remarkable.

As did all of the green. It is one of my favourite colours after all. 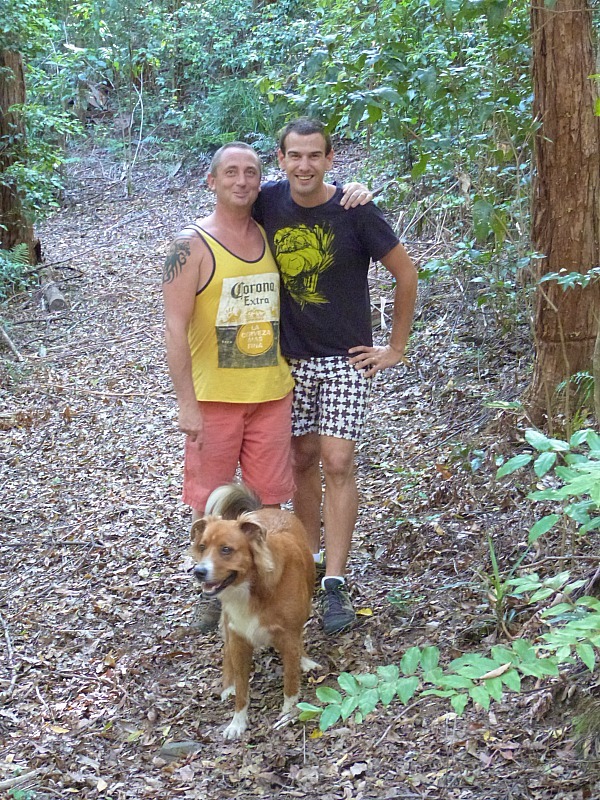