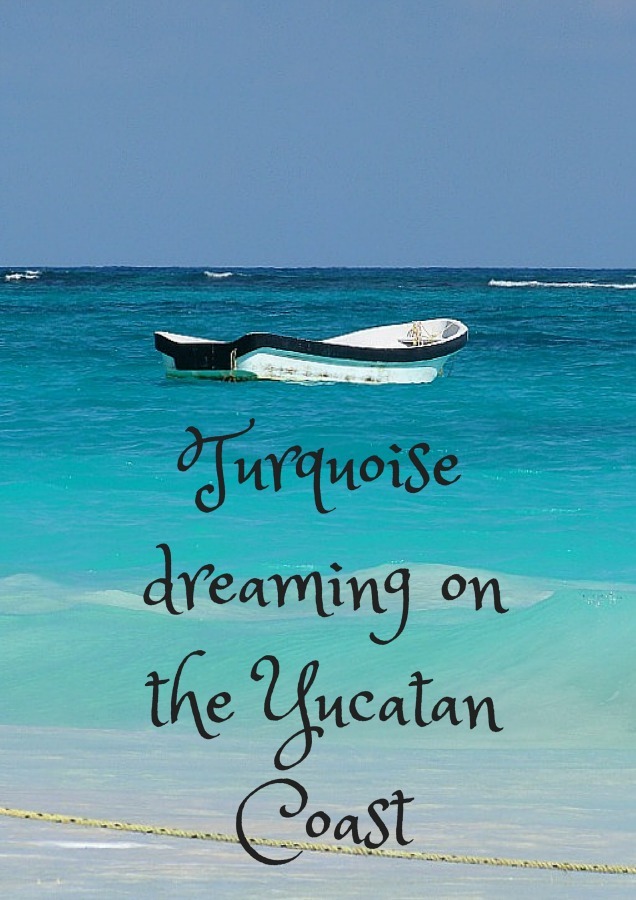 After our second overnight bus of the trip, which was as freezing and uncomfortable as the first one, we arrived in Cancun – our first stop on the Yucatan Peninsula.

As much as I would like to judge Cancun, I really can’t as we only spent about half an hour there getting breakfast before catching a collectivo to Punta Sam; Isla Mujeres bound.

Ferries to Isla leave more regularly and are faster from Puerto Morales but as we are budget travellers we thought we would go for the cheaper option.

Unfortunately upon arriving in Punta Sam at 11am we were told that the next ferry is at 2.45pm. With time to kill, I spotted a 5 star resort next to the port (not much else) so we had lunch there among the rich Americans and swam at the beach pretending we weren’t dirty backpackers, though unfortunately I think that carrying around said dirty backpacks gave us away. 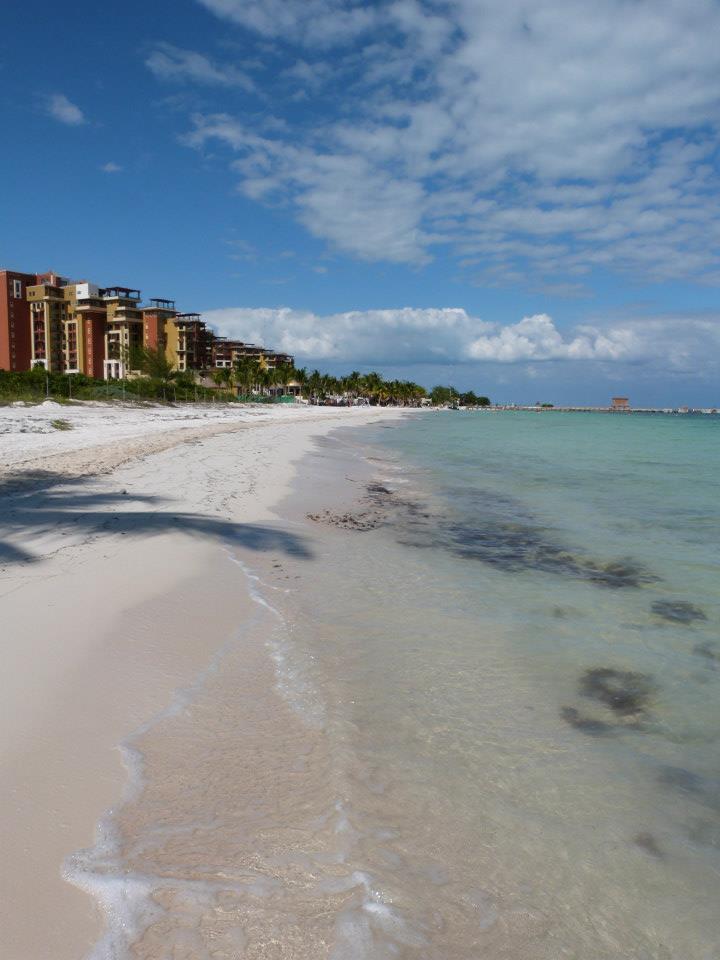 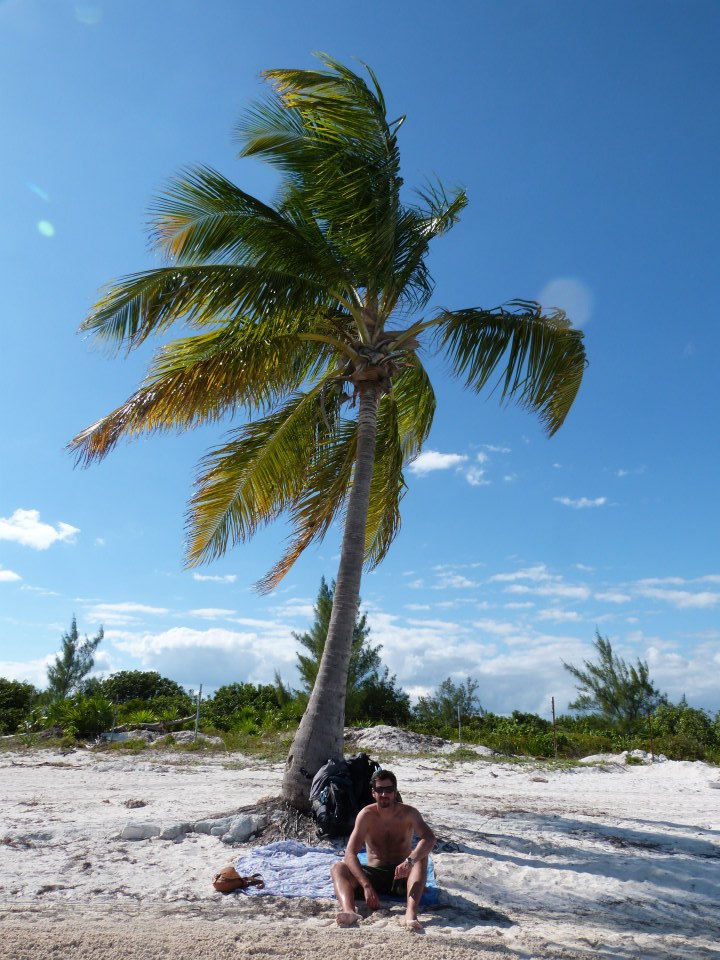 On arriving at Isla I was surprised how developed and Americanised it was, I expected it to be more sleepy with dirt roads and cabanas by the beach.

People mainly drive around in golf carts or scooters but it was quite busy and everything was priced in US dollars, a lot more expensive than the Mexico we had been travelling in up until now.

Despite the initial shock, we had three very agreeable days swimming at the stunning Playa Norte, snorkeling with and feeding tame fish and scootering around the island. 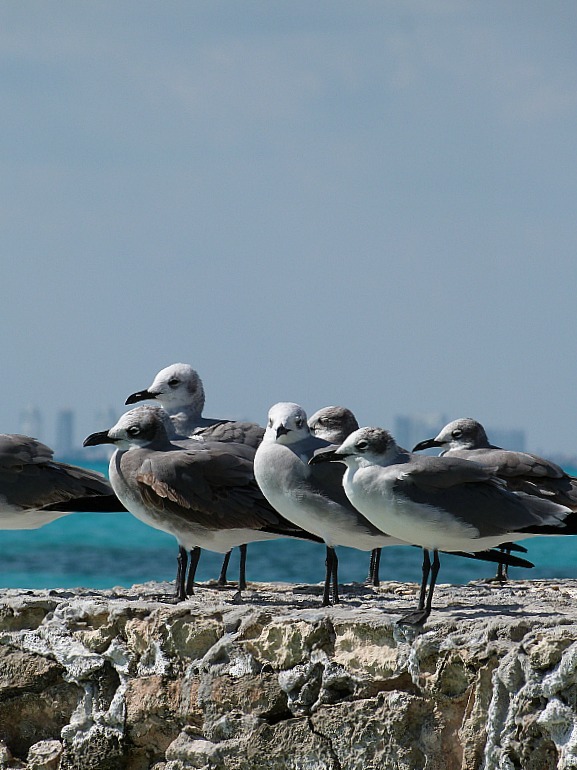 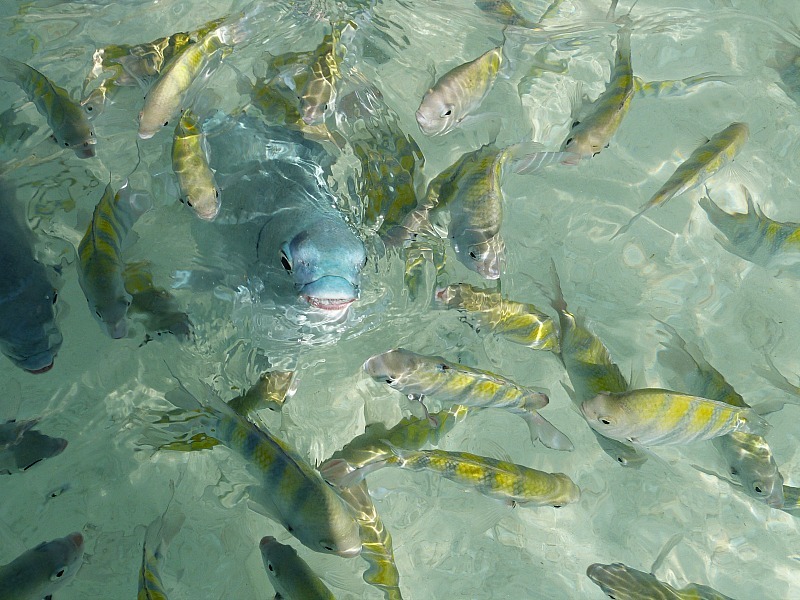 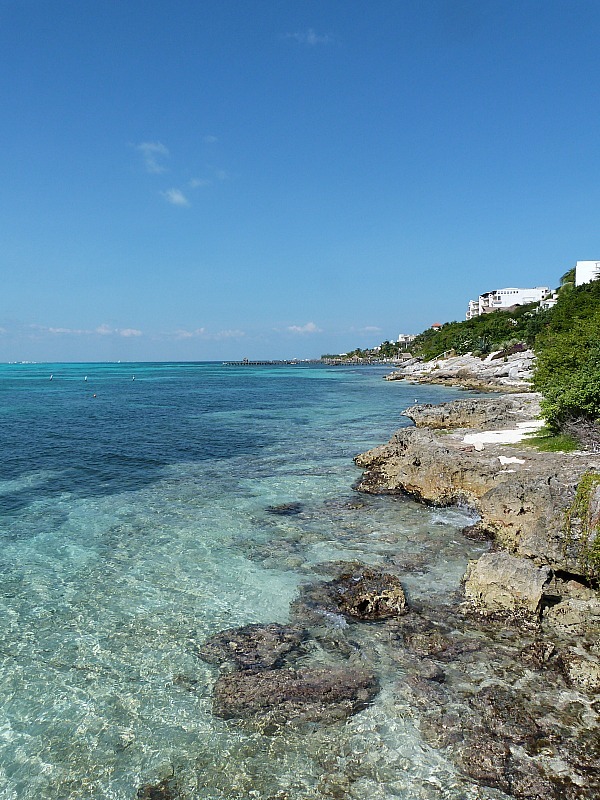 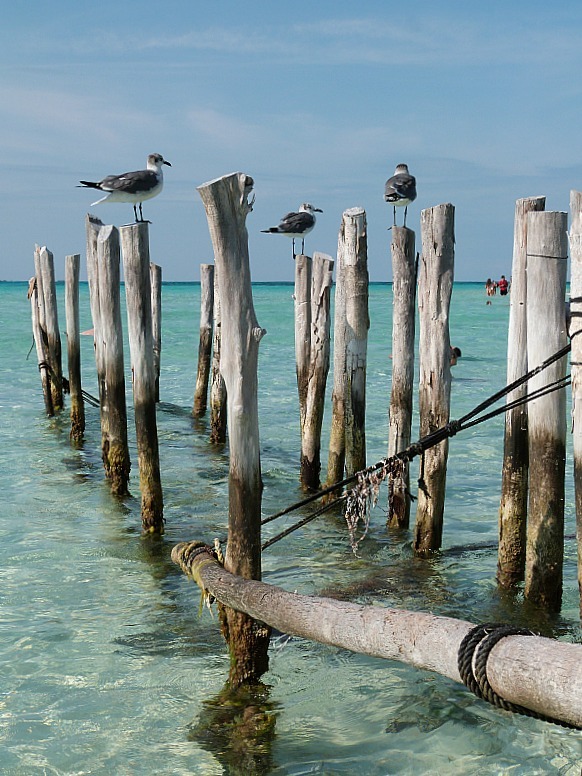 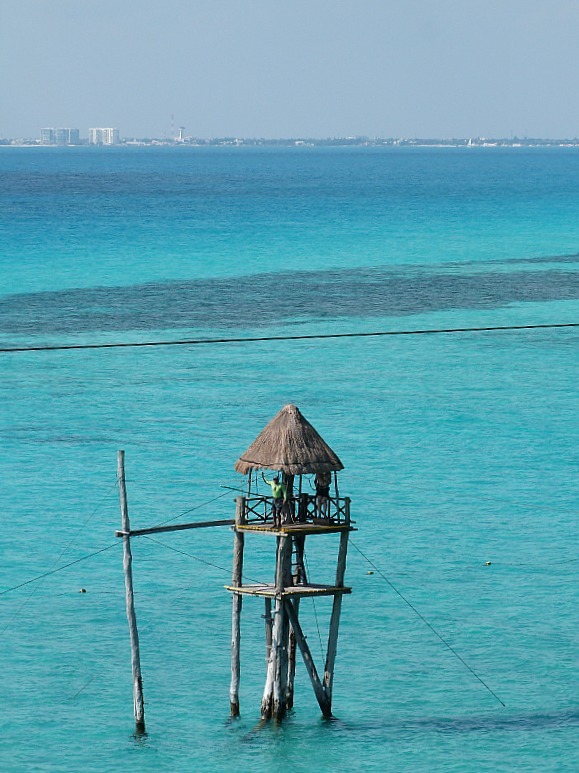 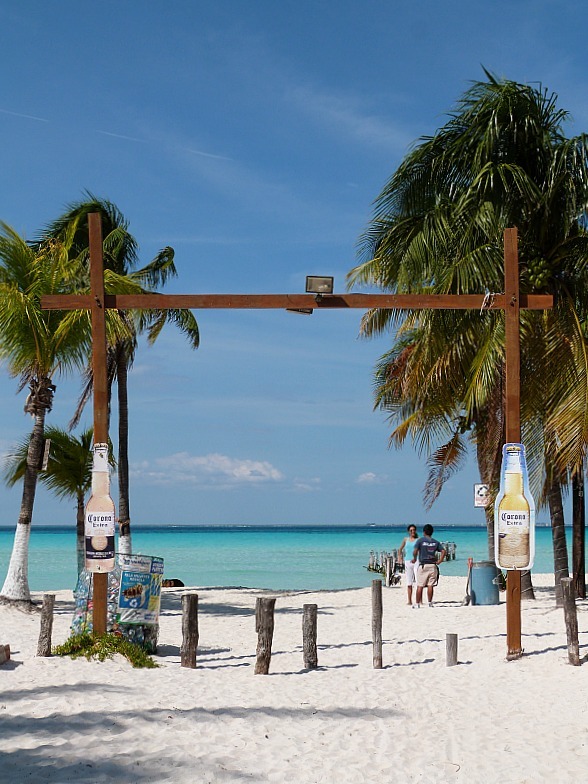 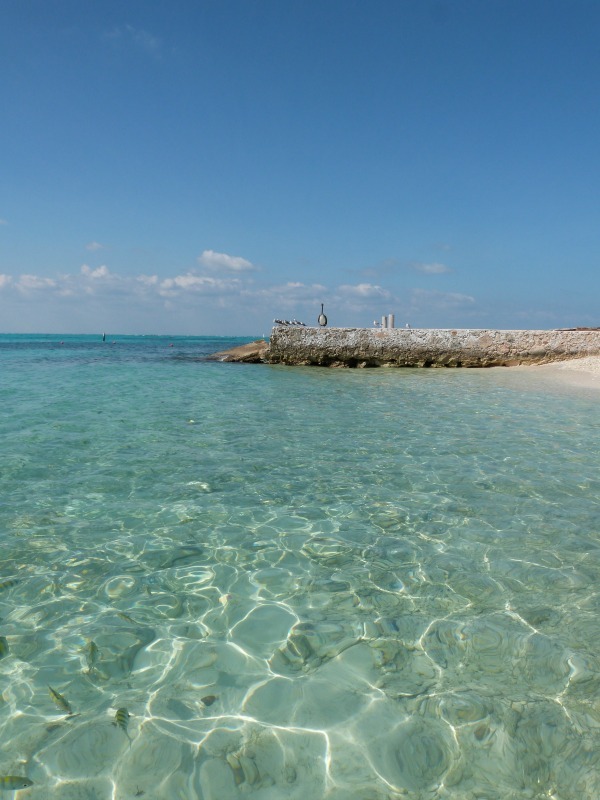 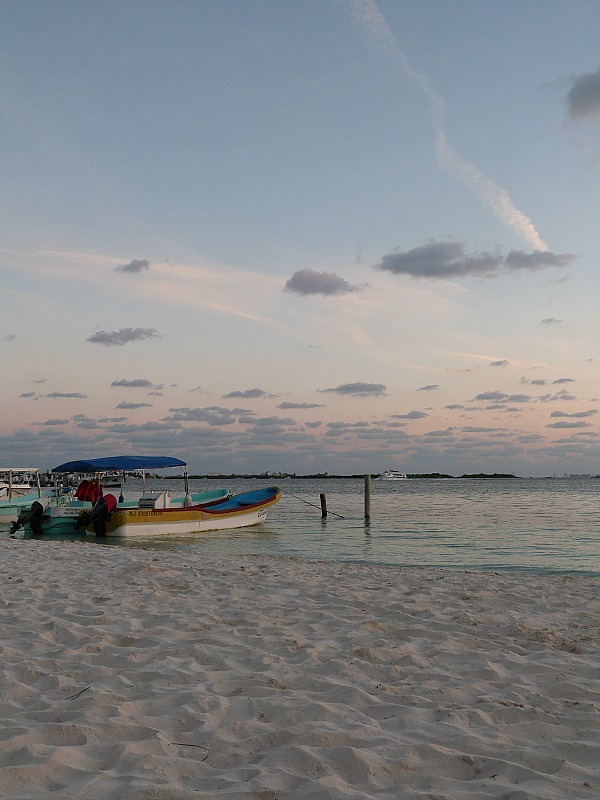 The day we left Isla it was overcast and once we got back over to Cancun to get the bus to Playa del Carmen, it started raining.

I think that to an extent the bad weather and our horrible dingy hostel did affect our view of Playa, but even on our last day when the sun came out, we were still not overly impressed. 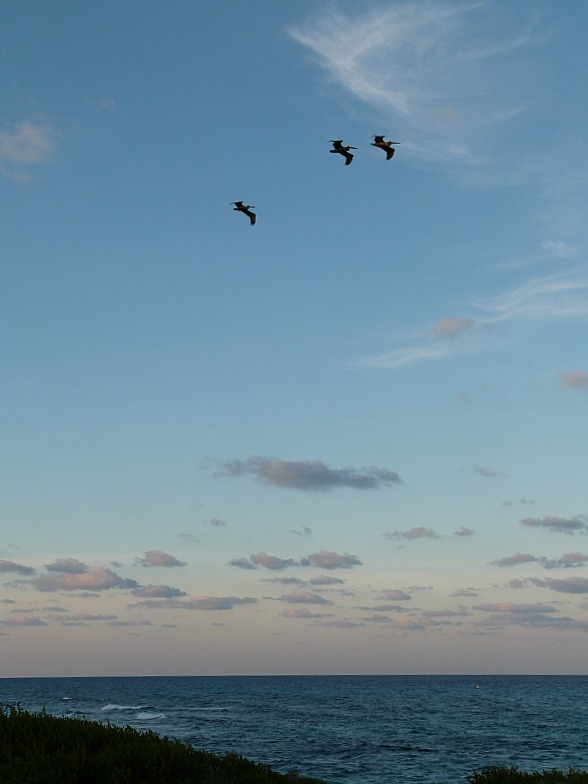 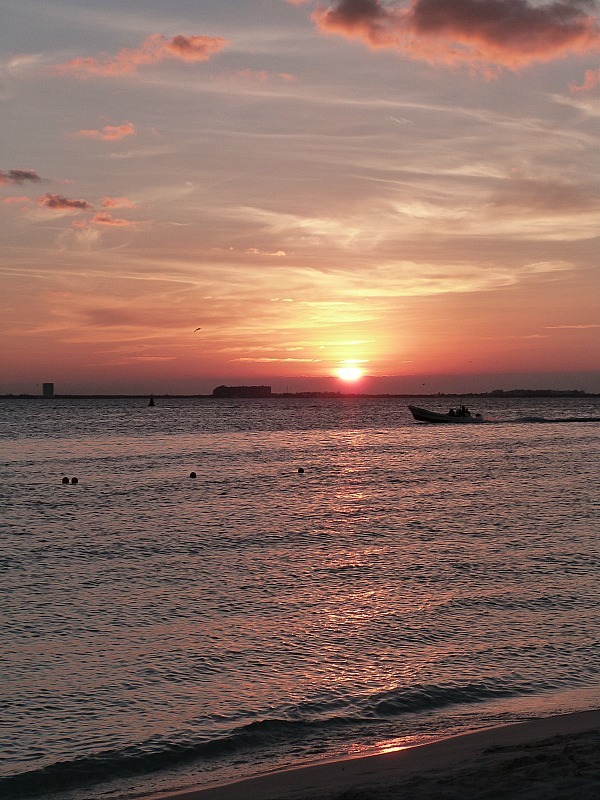 Playa is overpriced and over-touristed – like a Disneyland for adults with no Mexican culture left there what so ever. I think if we had come straight from a cold and dreary London maybe we would have liked it as the beach is nice and generally the weather is good there, but we came from Isla and before that, beautiful Chiapas, so it didn’t stand a chance.

There was a really nice Thai noodle place there though so at least that was something. Oh, and I bought a cool sarong. 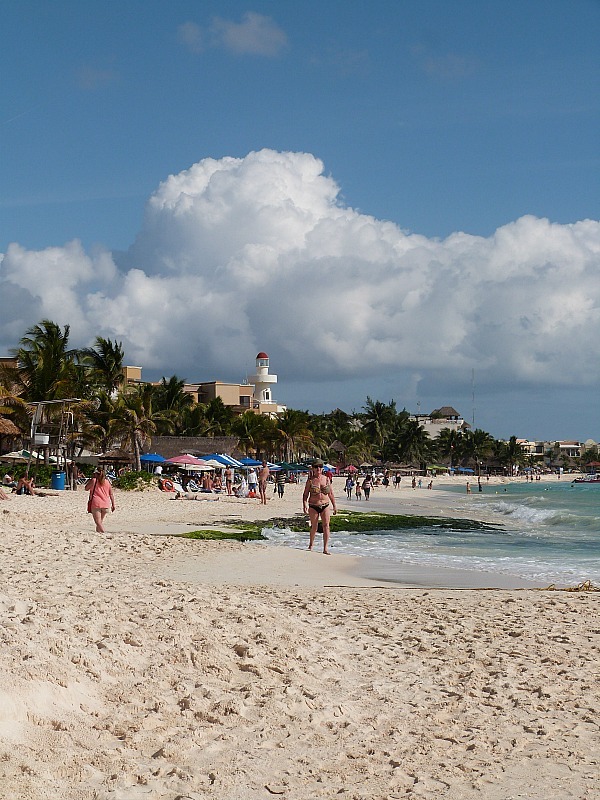 On the way from Playa to Tulum we stopped at the Cristalino Cenote that I heard was one of the nicest in the area. A cenote is a sinkhole filled with very clear freshwater, sometimes in a cavern. There are loads of cenotes around Tulum and in other parts of the Yucatan and next time I would love to do a Yucatan road trip so we can visit more of them.

Cristalino is remarkably clear with emerald coloured water and part of it is in a cave. We had a great couple of hours exploring the cave and swimming before getting another bus onward to Tulum. 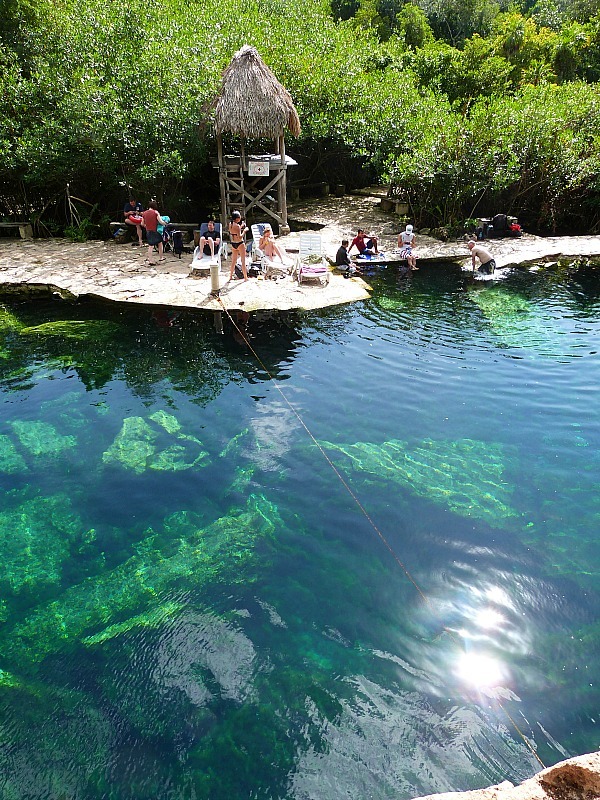 Tulum has a weird setup, it is made up of three separate areas; the ruins, town centre and the beach. Unfortunately these three areas are 3-4kms apart.

We stayed on the highway by the ruins road for the first couple of nights in a grubby but cheap hostel that provided us with a free bike to use and a cooked breakfast in the morning, we even got cable TV in our room (and also unwanted aspects such as no window and a backing up toilet).

The highway runs straight through town and it isn’t much to look at but it does offer a selection of very affordable and delicious Restaurants. I recommend the fish tacos at the Natty Dread. 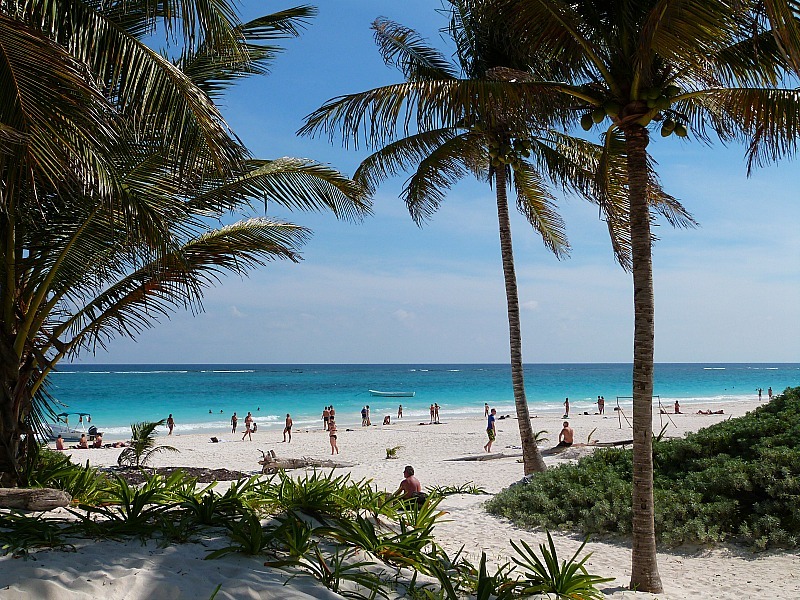 We visited the ruins which are the most visited ruins in Mexico, I could definitely believe that. The ruins were largely unimpressive, especially next to Palenque and Teotihuacan, but the setting is spectacular.

Nestled on the cliffs overlooking the crashing surf and icing sugar beaches of the Caribbean coast, I can see why they are so popular.

We swam at the ruins beach (along with EVERYONE else) then got our bikes and headed down to quieter beaches. The beaches in Tulum are simply stunning. Big sand dunes, powder fine sand and dreamy pale blue ocean.

The water was clearer in Isla Mujeres but you had to walk out for miles to get even waist deep, not a problem in Tulum. 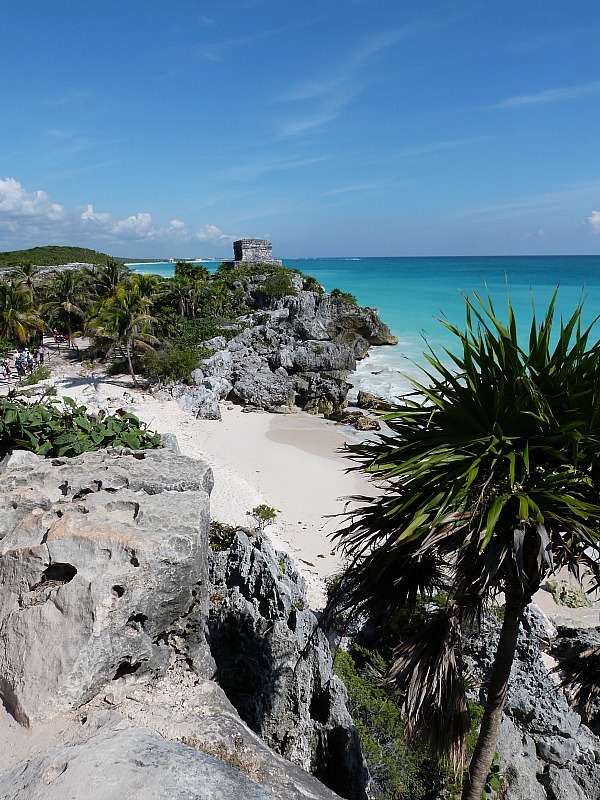 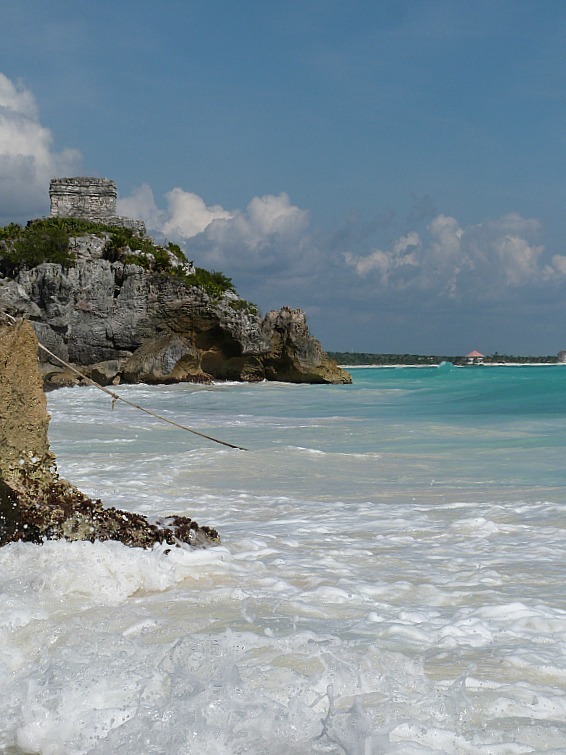 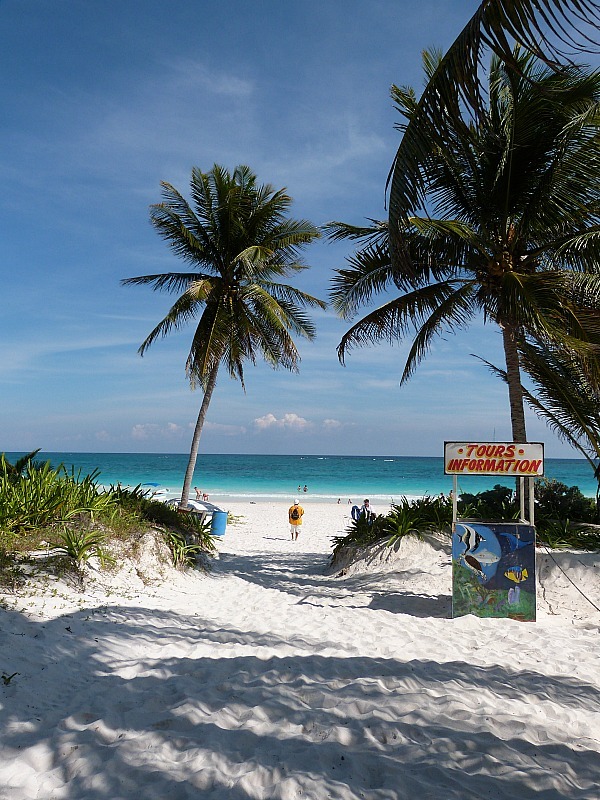 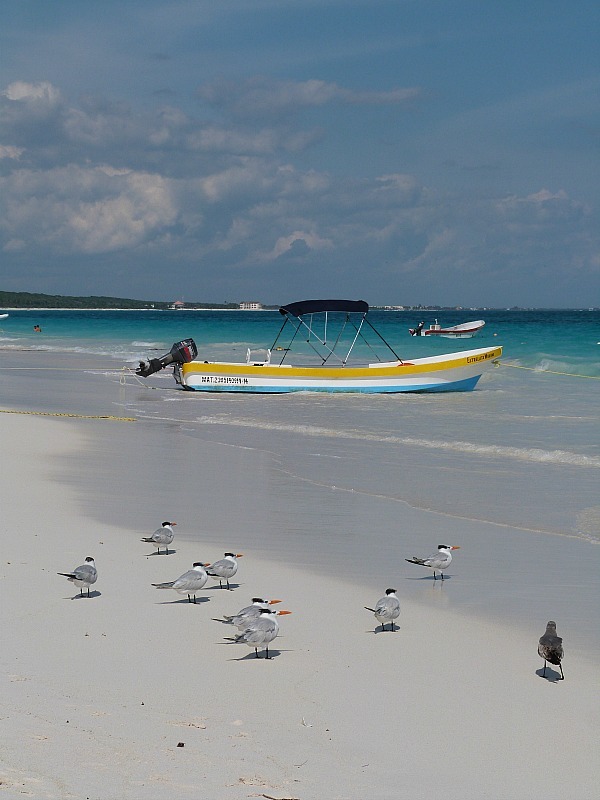 After spending the rest of the day at the beach we decided to move to a beachfront cabana for our last two nights.

It was very rustic and the food at the beach restaurants is ridiculously expensive, but we stocked up at the supermarket and had a mellow two days swimming and relaxing. We loved falling asleep to the sound of the waves. 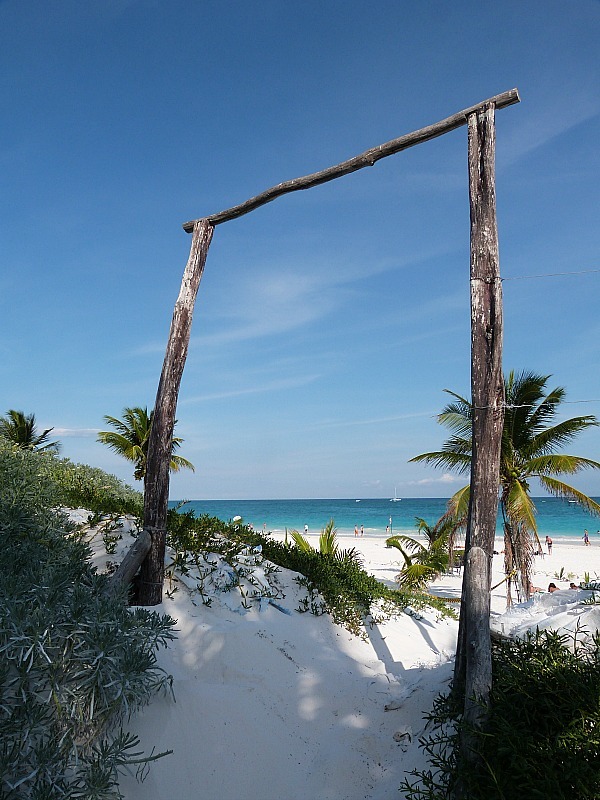 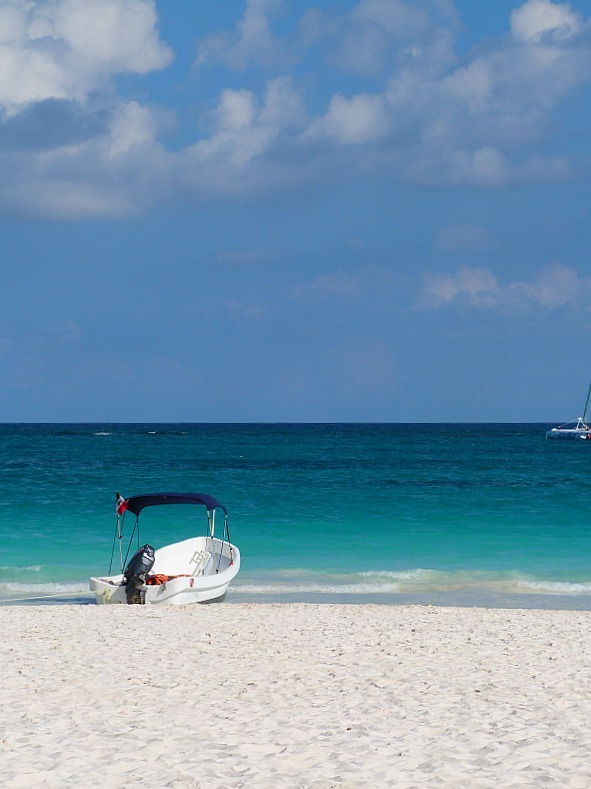 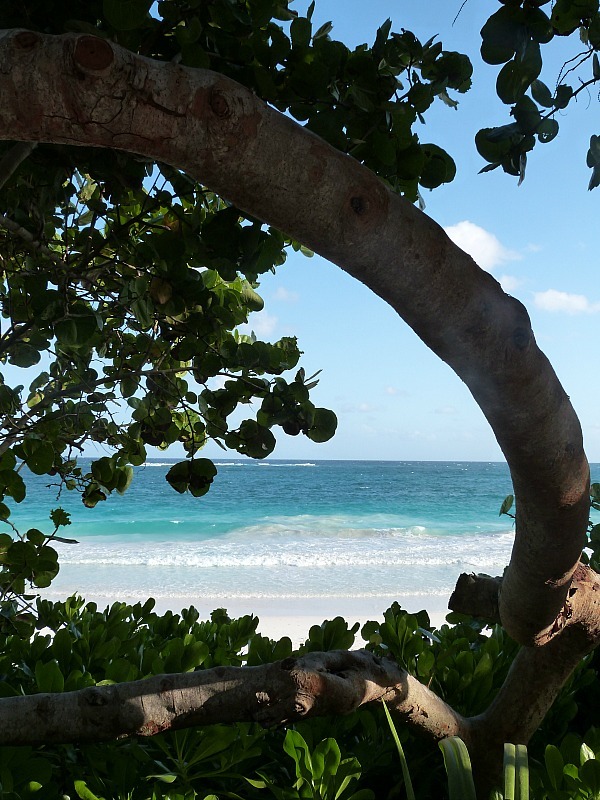 Refreshed and recharged we decided to venture a bit off the well beaten Gringo trail to Laguna Bacalar, a freshwater lake that has a white sand bottom and is several shades of blue.

Bacalar is great, not much tourist infrastructure but a fantastic hostel right on the lake with its own private jetty to swim off. We met a guy from Italy and two Germans when we got off the bus so we managed to find it together.

We were joined later that night by our now good friends, Pete and Lynn from England, and had an enjoyable three nights getting to know everyone. 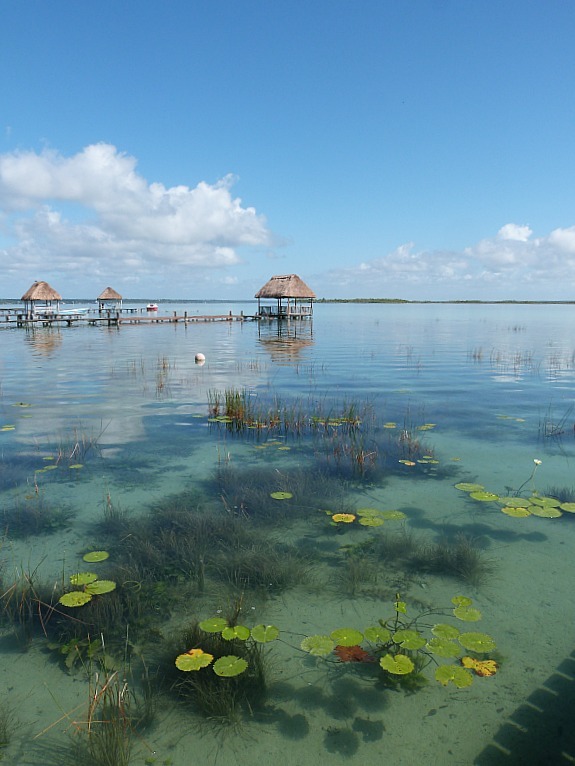 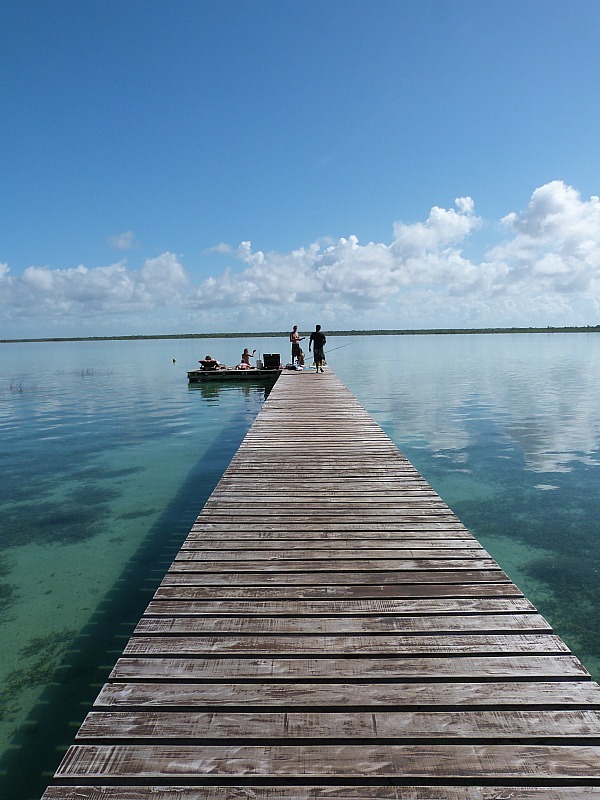 We rented bikes and biked to Cenote Azul one day (not as impressive as Cenote Cristalino) and swam and kayaked in the lake on another. The lake is truly breathtaking and I can’t believe it’s not more touristy, I am sure that within a couple of years it will be. 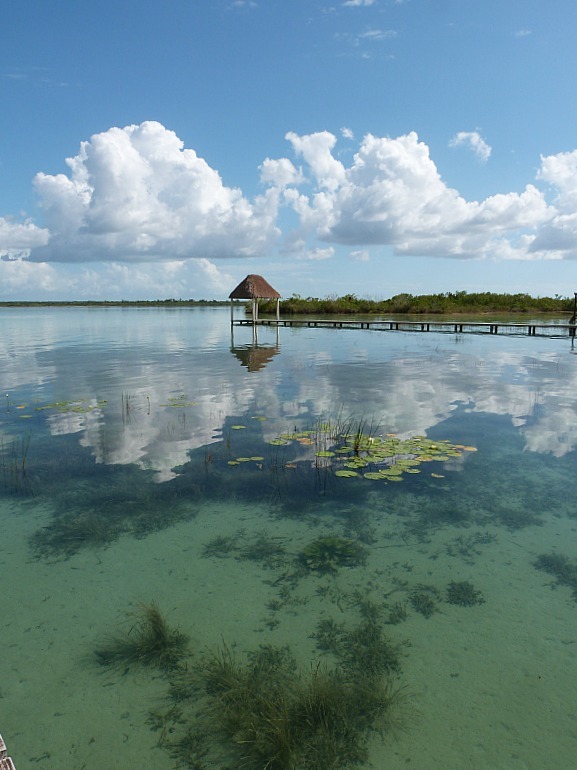 Our last stop in Mexico was in Chetumal for a couple of hours, waiting for our expensive boat to Caye Caulker in Belize, and new adventures.

Mexico – we will be back!

3 Comments on Turquoise Dreaming on the Yucatan Coast of Mexico