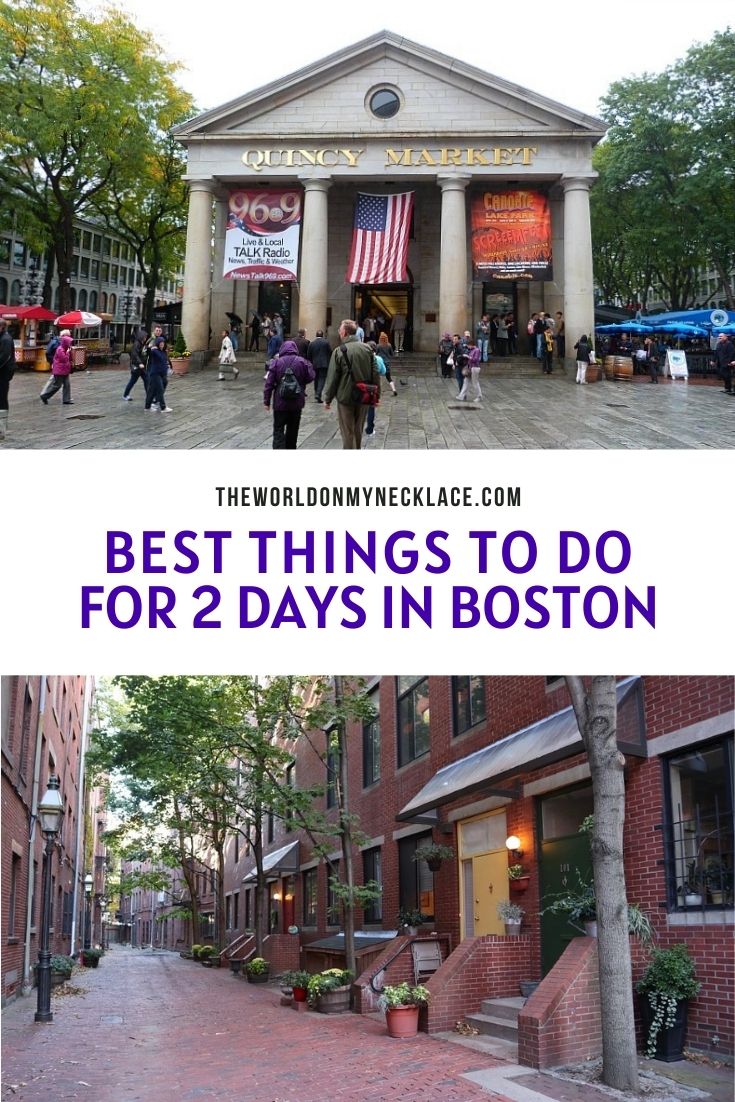 Want to find out how to see the best of Boston in 2 days? Then read my 2 days in Boston Itinerary which covers the best things to do in the city.

If you asked me before I started my East Coast Fall Road Trip what city I was most looking forward to visiting I would have definitely answered New York. Poor old Boston wouldn’t have even been considered.

Despite knowing it was one of the oldest cities in the US which would usually appeal massively to the history lover in me, I just didn’t think Boston would be any competition to New York. 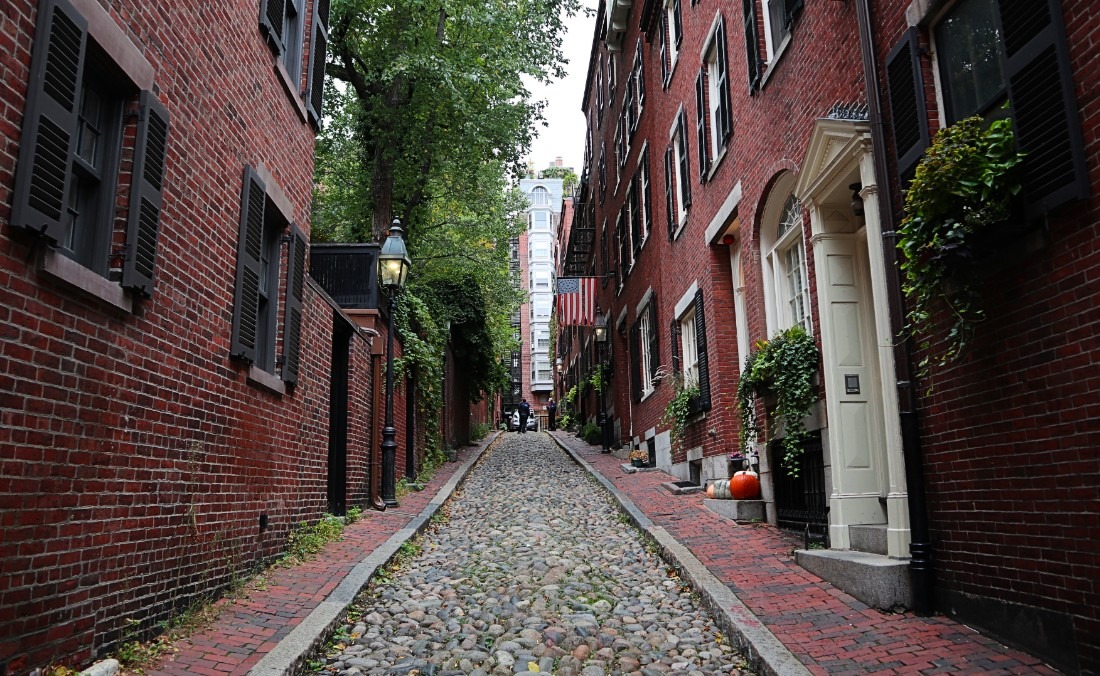 Turns out that I couldn’t have been more wrong. Over our 2 days in Boston, I very quickly fell in love, in fact, Boston is now one of my favorite cities in the United States.

And I am so glad that I got to experience fall in Boston. In fact – I loved it so much that I returned again for another three days during fall 2019.

Massachusetts turned out to be my favorite state on the East Coast too, and I wrote a separate piece about all the small towns in Massachusetts I loved as much as Boston. 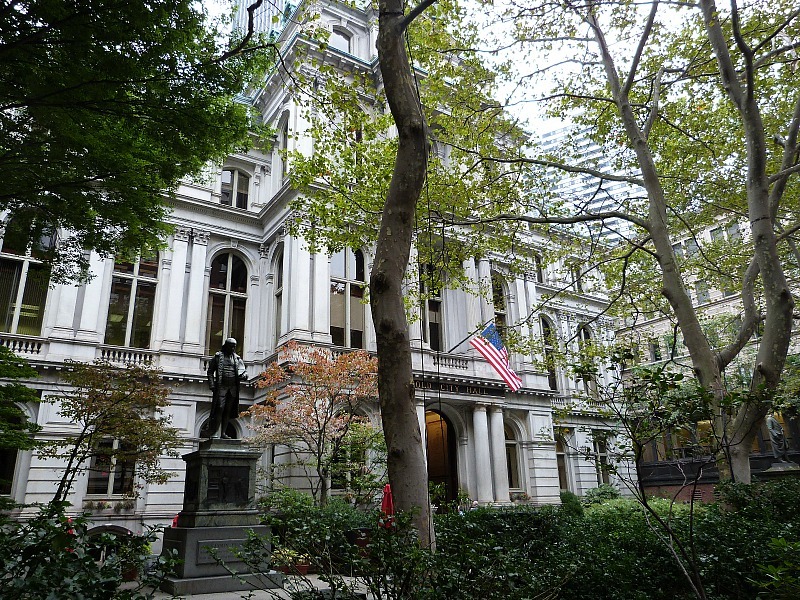 We only spent three nights/two days in Boston so we barely scratched the surface of what the city has to offer – you can’t really see everything in Boston in 2 days, but we absolutely loved what we did get a chance to experience.

But for us, there wasn’t one thing in particular that made our 2 days in Boston during fall so enjoyable, but rather a coming together of a lot of different things.

Here are the things I think you should do to have the perfect Boston Itinerary.

My 2 Days in Boston Itinerary

Eat Your Way Through the Boston Food Scene

Oh the food! Boston is well-known for its fabulous food scene and rightly so. From incredible pho in Chinatown and pizza by the slice in the city, through to the best ice cream and authentic cannoli, we didn’t have a bad meal during our time there. 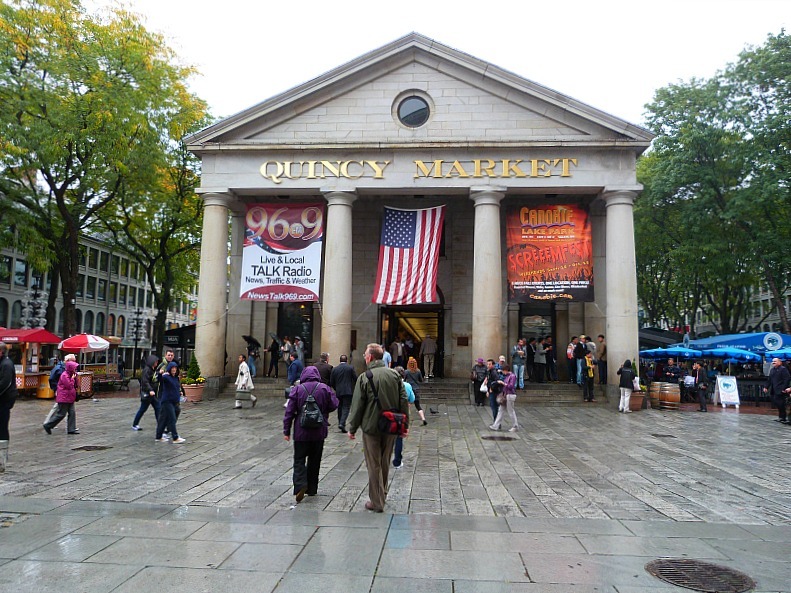 I’m kicking myself now for not trying two of Boston’s iconic dishes: Boston cream pie and Boston baked beans, but I did have clam chowder under the beautiful dome of Quincy Market, it was fantastic.

I followed up the chowder with a creamy scallop pie then had to go back to the hostel for a nap to sleep off my food coma (totally worth it). 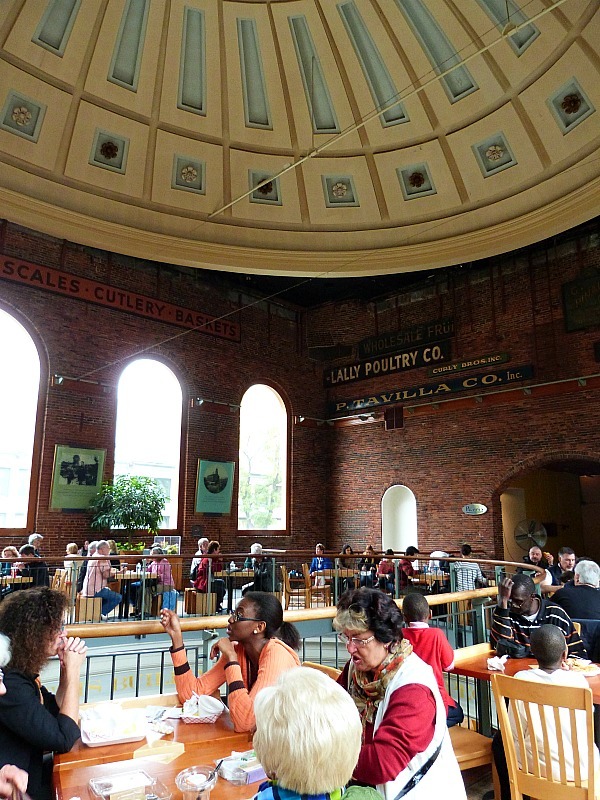 Because it was fall in Boston when we were there, I overindulged in Pumpkin Spice Lattes (no regrets) as well as all the pumpkin beer at the English-style pubs tucked away around the city.

Much to our delight, Boston has the most English pubs I have seen anywhere outside of the UK and the UK does pubs better than anywhere else in my opinion. 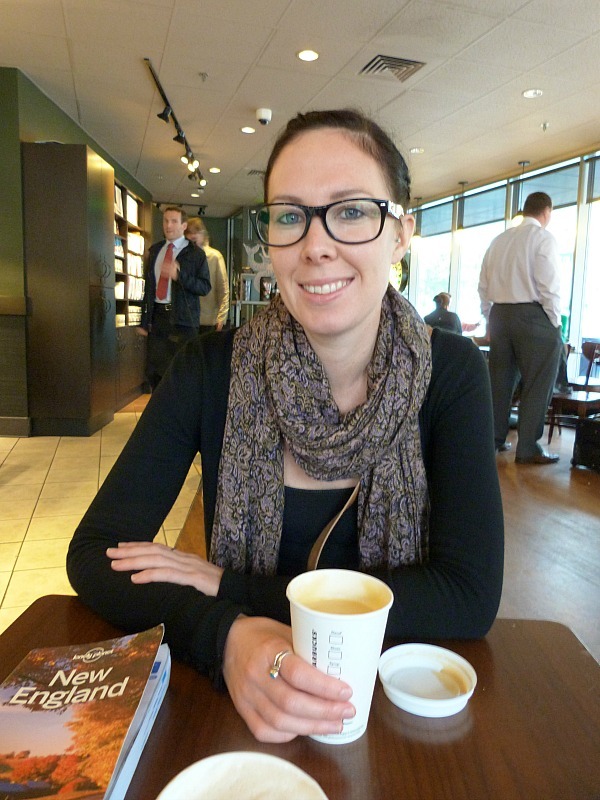 When we visited nearby Cambridge, I enjoyed wandering Harvard where there was some beautiful fall foliage, but my highlight was eating at the burger joint Mr Bartley’s Burger Cottage down the road, with its outlandish burger names and buzzing atmosphere. 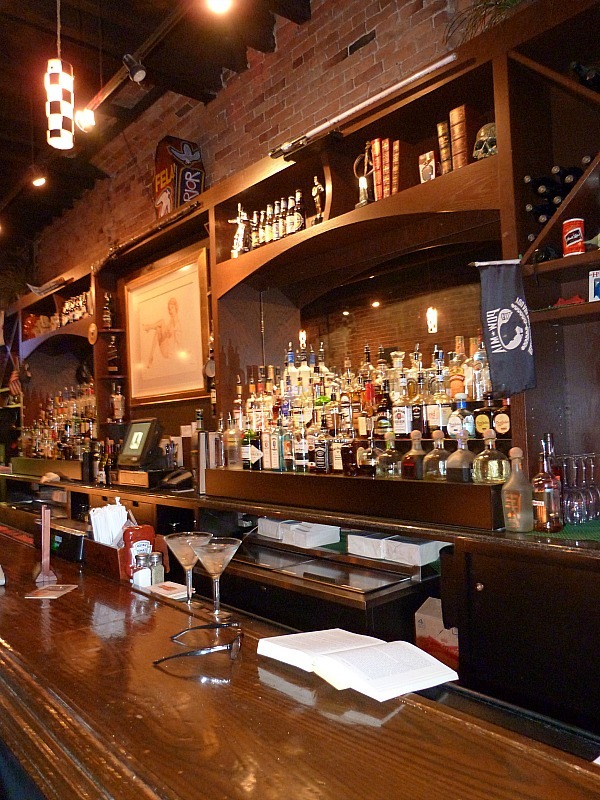 For a seafood fix, we went to the Barking Crab Restaurant. It may be touristy but as we were tourists in the city we embraced it and stuffed ourselves with Dungeness crab legs, peel and eat shrimp, and sweet potato wedges while listening to live music.

On my second visit, I also ate famous in Boston brick oven pizza from Regina Pizzeria in the Italian North End of the city, and awesome pho from Phở Pasteur in Chinatown. So good!

I didn’t get a chance to try out any of the food trucks that operate around Boston, and there are a lot, just one of the many reasons I need to get back there!

For more amazing places to visit in New England, check out this New England Bucket List

Founded in 1630 by Puritan settlers from England, Boston’s historic past is tangible in its preserved historic buildings. Unsurprisingly it has a very English feel to it and after six years of living in London, it made me feel right at home. 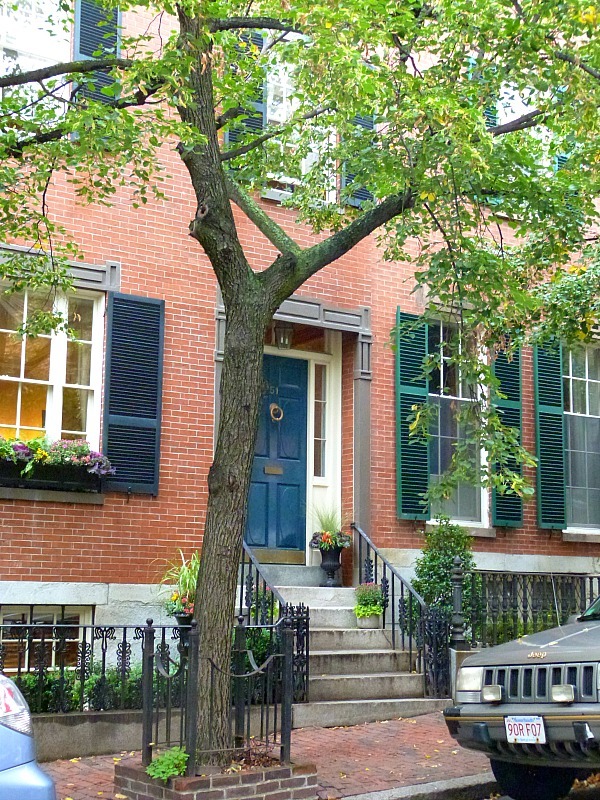 Boston was the scene of several key events during the American Revolution with the most well-known being the Boston Tea party, where a shipload of tea was ruined by political protesters who dumped it in the harbor to protest the Tea Act.

We spent a morning walking the Freedom Trail which is a self-guided walk that takes visitors between historically significant points around the city. 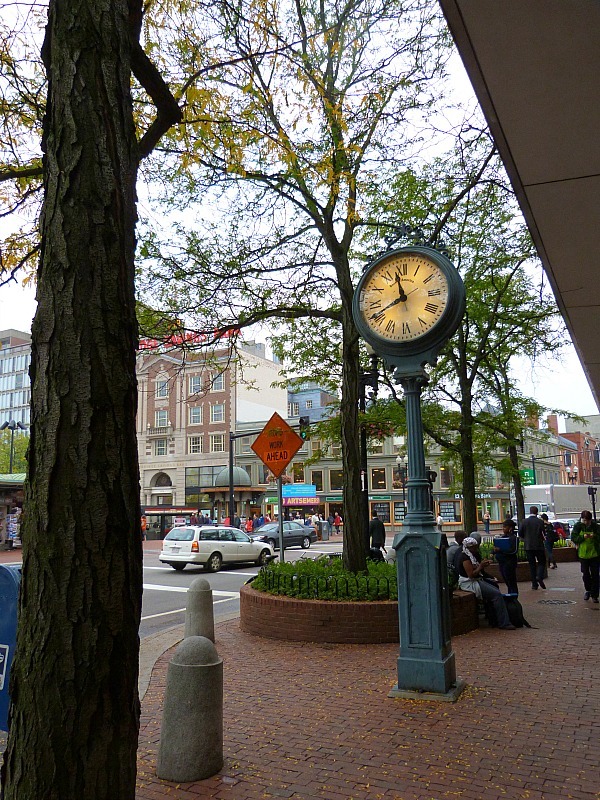 One of my favorite spots on the Freedom Trail was the Granary Burial Ground on the edge of Boston Common, where Benjamin Franklin’s family and Paul Revere are buried.

A lot of the hand-carved stone gravestones are detailed with winged skulls and are dated back to the founding of the burial ground in 1660. 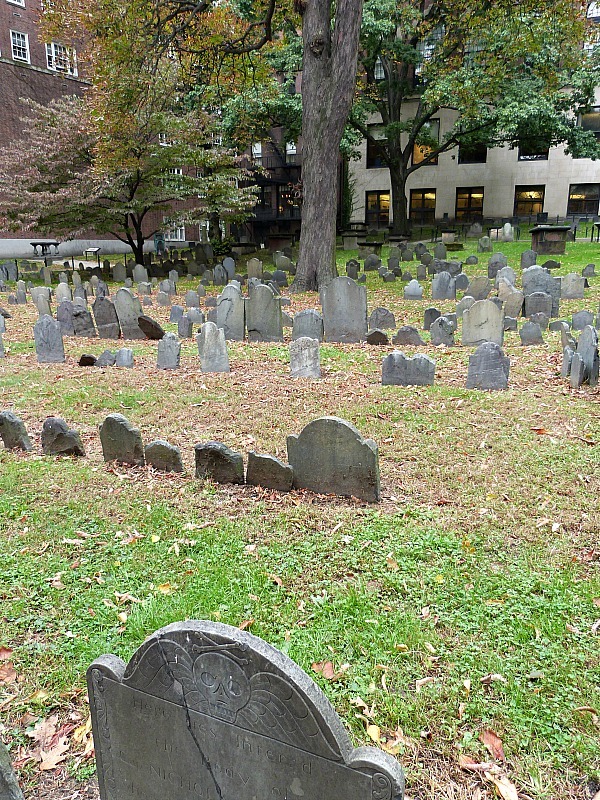 The trail continued through the Financial District past Faneuil Hall and Quincy Market to the Italian North End where Paul Revere lived (his house is still standing) and on to the expansive Copp’s Hill Burial Ground.

The last stops were over the bridge in Charlestown where we joined a free Ranger-led tour up to Bunker Hill to learn about the Battle that took place in 1775 between the Americans and the English during the Revolutionary War. 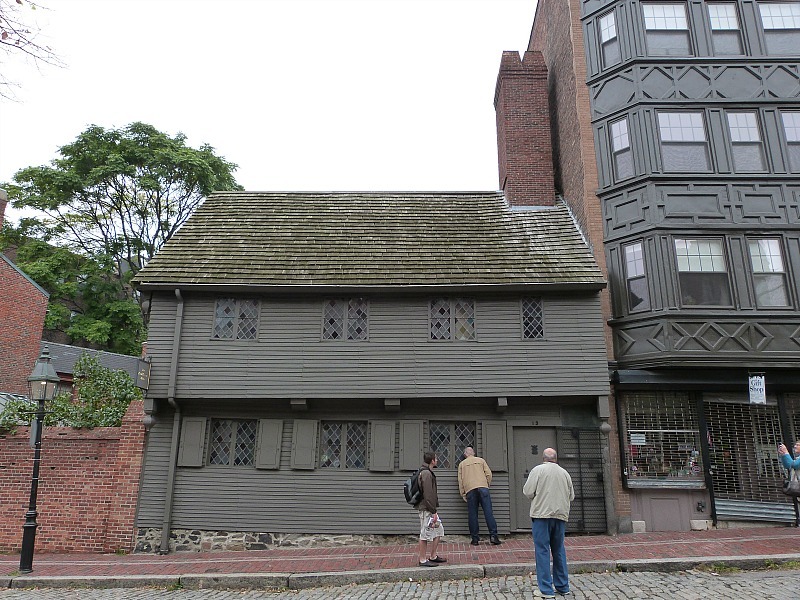 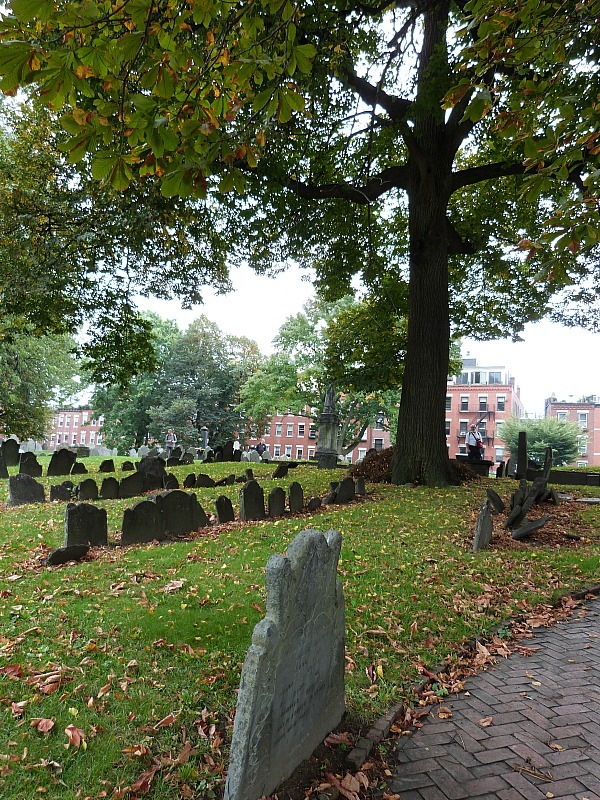 Check Out Some Boston Neighborhoods

My favorite neighborhood to explore in Boston is historic and affluent Beacon Hill. It is a leafy suburb with regal terraced apartments, cobbled streets, and exclusive English pubs.

Old-fashioned gas lamps switched on as night set in and with the rain-slicked streets it made me think of London, but an idealized version from the turn of the twentieth century. 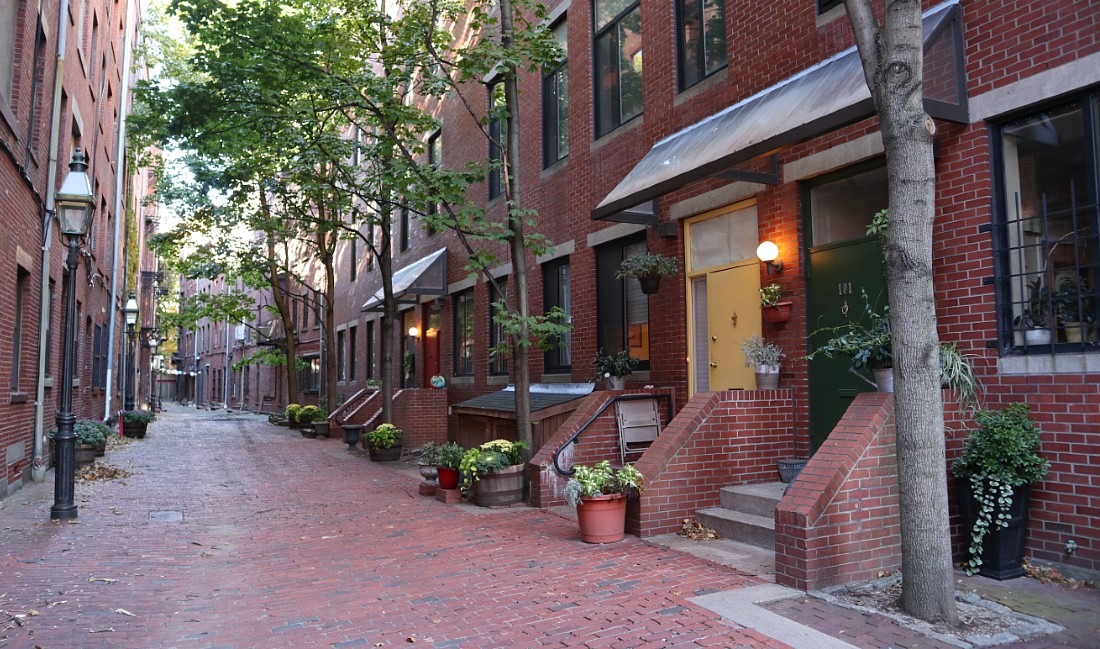 In contrast to the genteel historic streets of Beacon Hill was the edgier neighborhood of South End Boston.

Although there are lots of beautiful Victorian row houses, there is also a vibrancy born of the young urbanites that call the South End home, and this is reflected in the funky stores, eclectic eateries, art spaces, and street art.

Back Bay is another Boston neighborhood that you should definitely visit, and the best way to get there is to walk from Boston Common along the green space that runs parallel to Commonwealth Avenue. I loved the big brownstone houses and trees wrapped in fairy lights. 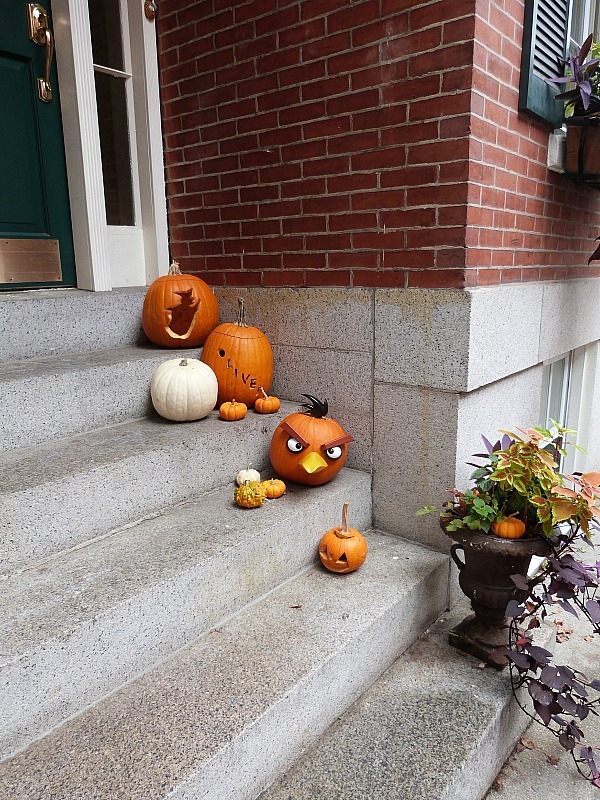 Newbury Street is the main destination in Back Bay and is full of big brand shops that are interspersed with smaller design boutiques, restaurants, cafes, and bars.

Despite it being three weeks before Halloween, there were decorations in shop windows and jack-o-lanterns on front stoops which lent a festive air to the area.

The most iconic green space in the city is the centrally located Boston Common. The Common is the oldest city park in the USA and encompasses a sprawling 50 acres of land that includes walking paths, a duck pond, memorial statues, a bandstand, and baseball fields. 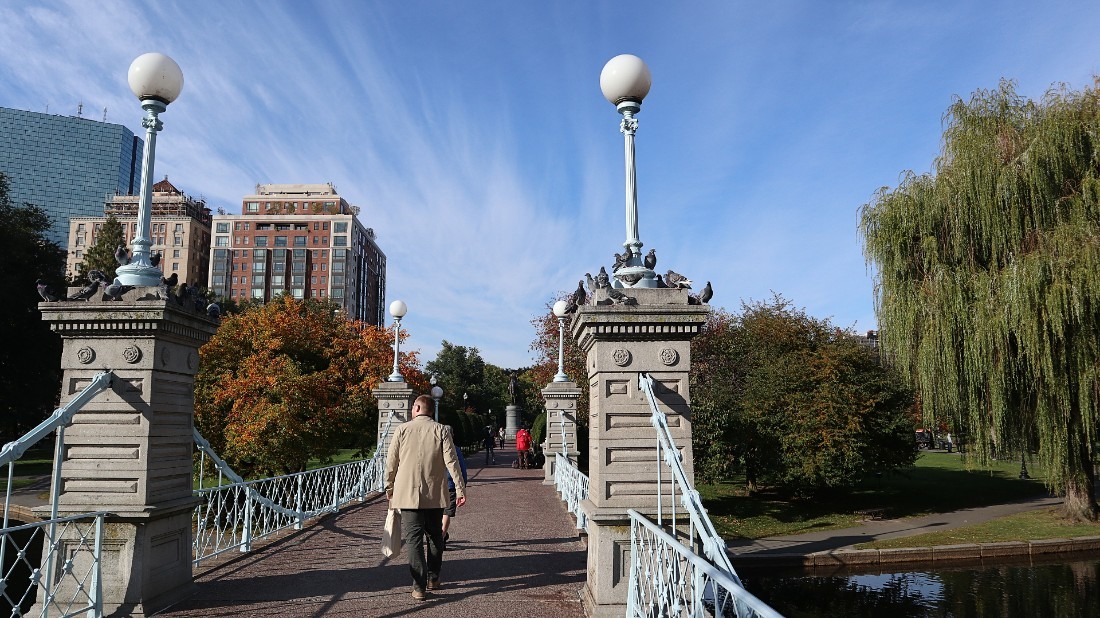 It’s a beautiful spot to have a picnic or go for a relaxing walk to escape the hustle and bustle of the city. 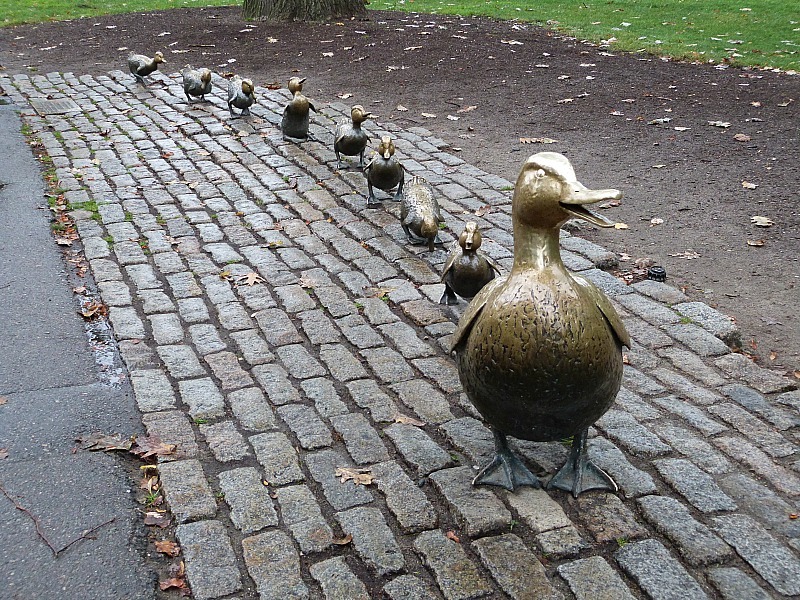 We had really wanted to hire bikes and bike the riverside path to Harvard University in nearby Cambridge but with the weather being so rubbish, we took the subway out there instead. 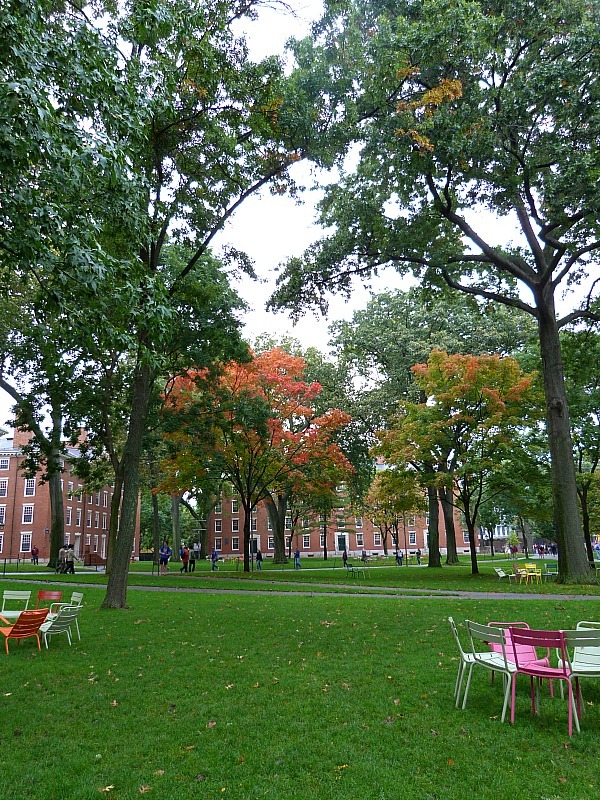 Once there we walked around the wooded grounds and saw some students with a pet baby squirrel that was running over their shoulders.

With the fall foliage and with the background of handsome stone buildings it was quite beautiful. I definitely think the best time to visit Boston is fall – the fall foliage everywhere is so stunning.

Another great spot for a wander was the harbor walking path. On a foggy morning, everything was still and we felt like the only people in the world as we walked past wharf buildings and boats docked in the harbor.

When I returned in fall 2019, the sun was shining and it was even more beautiful. 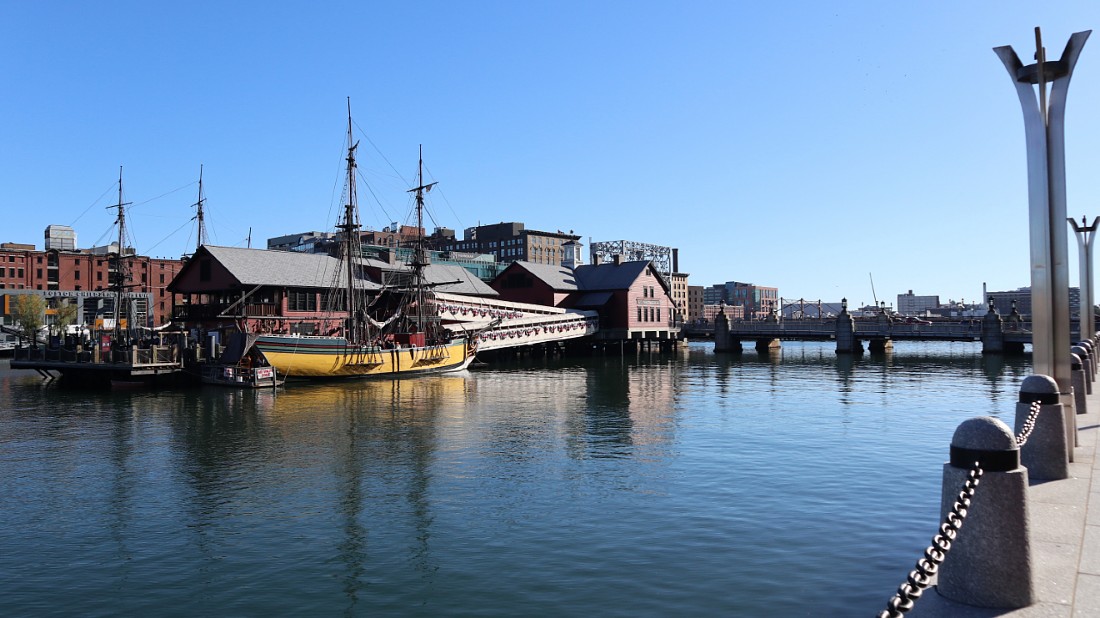 I have always found fog to have a mysterious quality that I love and it gave the setting an ethereal quality.

The fog was thick when we walked over the Fort Point Channel bridge one evening, with the city lit up and hazy through the soupy mist. 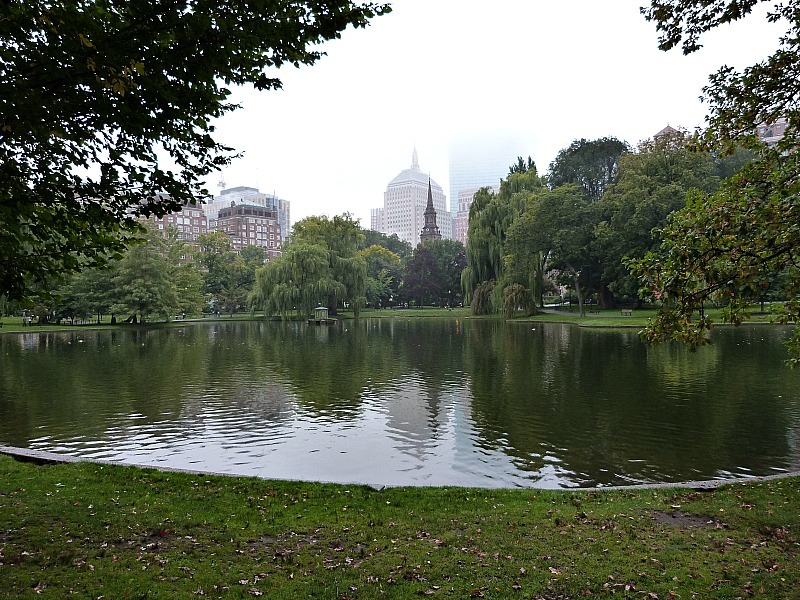 Along with Boston’s numerous historic buildings, tons of eating options, great shopping, and accessible harbor, I think it was the feel of the city that really captured me. It is such an exciting mix of the old and the new and a city that I will definitely return to.

And you should definitely visit Boston in the fall – I hope this Boston Itinerary helps you plan your own fall trip there. 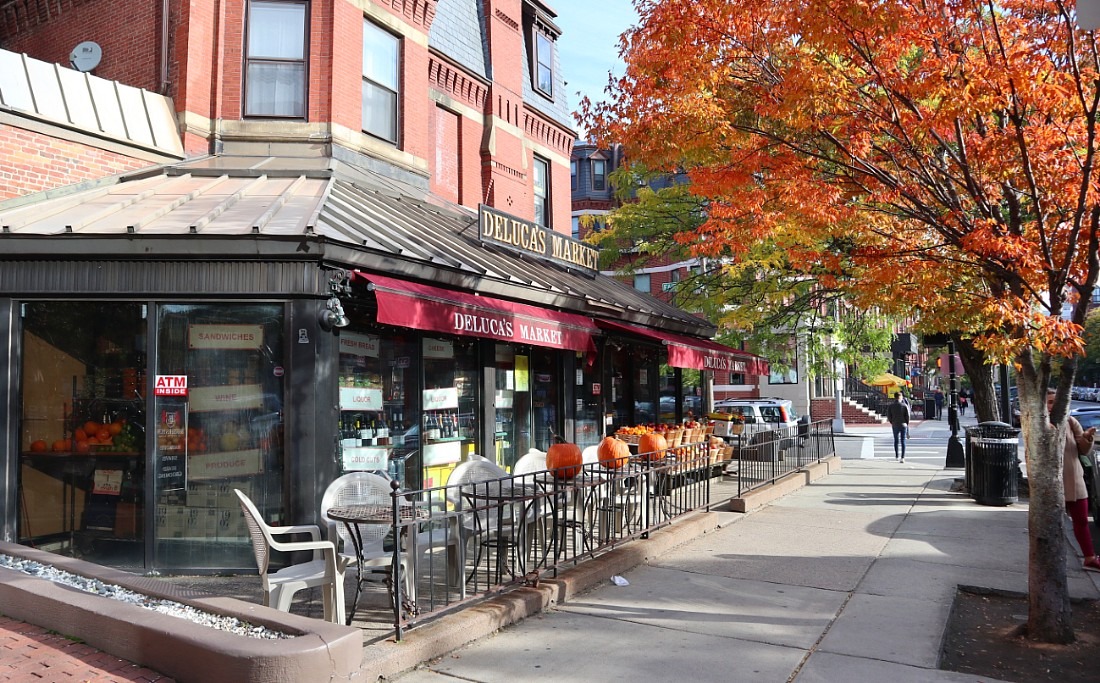 How to Plan Your Own Trip to Boston

We stayed at the excellent Chinatown HI Hostel and we loved it. They offer private rooms and dorms, and during two separate trips to Boston, I have stayed in both. It has a central location in Chinatown and has free breakfast.

Boston has a large number of beautiful hotels. The best-rated hotels are The Godfrey Hotel, Revere Hotel, The Revolution, citizenM Boston, The Colonnade Hotel, and The Eliot Suite Hotel.

There are lots of options for vacation rentals in Boston, and I would recommend staying in or near Beacon Hill, Back Bay, Waterfront, or downtown to be close to the main sights. 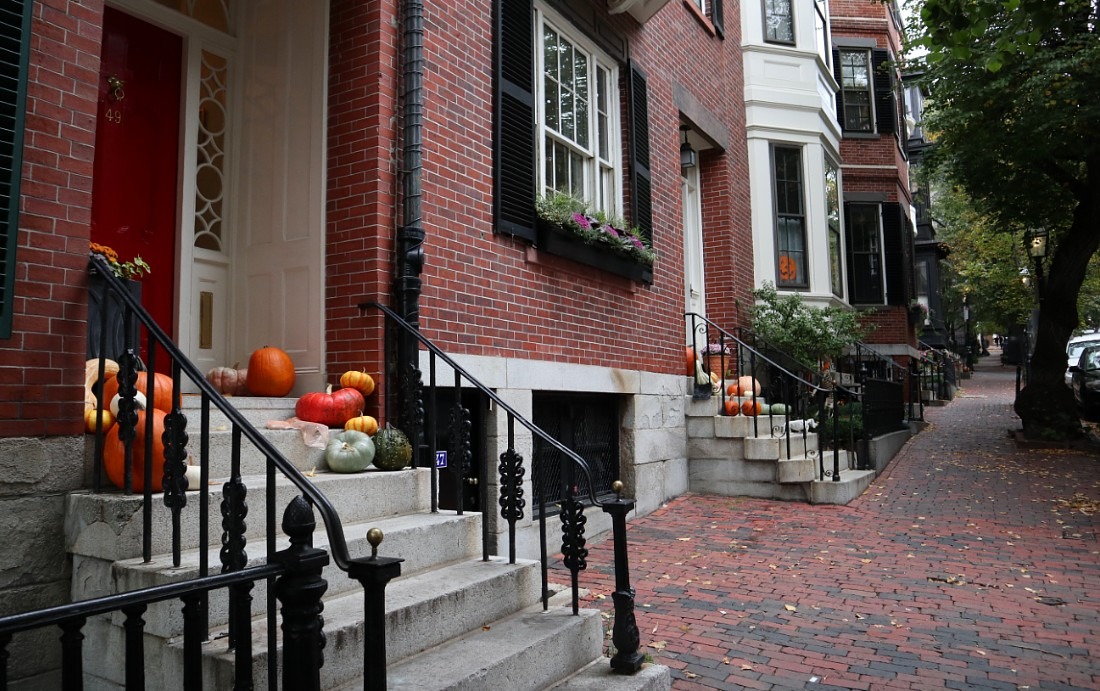 Here are my top picks for affordable and centrally located vacation rentals:

Getting Around in Boston

If you are staying close to downtown, you can get to a lot of the places of interest by walking. Otherwise, Ubers are cheap and plentiful.

If you want to visit somewhere further away like Cambridge, the best way to get there is by using the subway, known as the “T”. 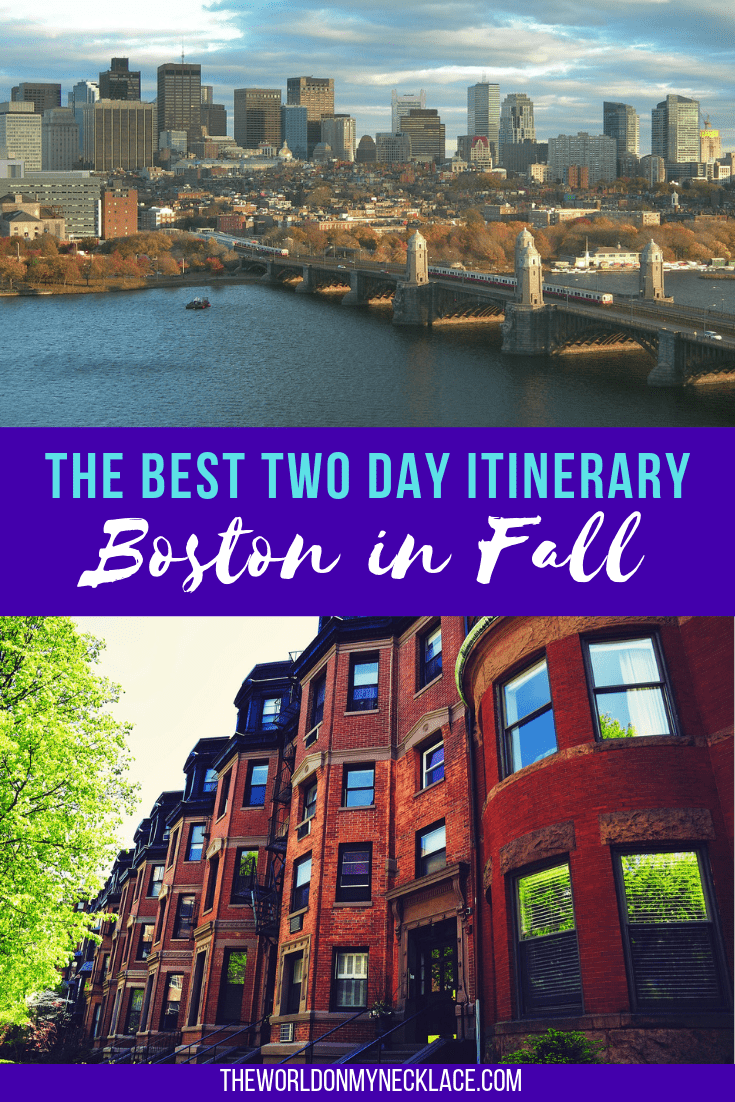 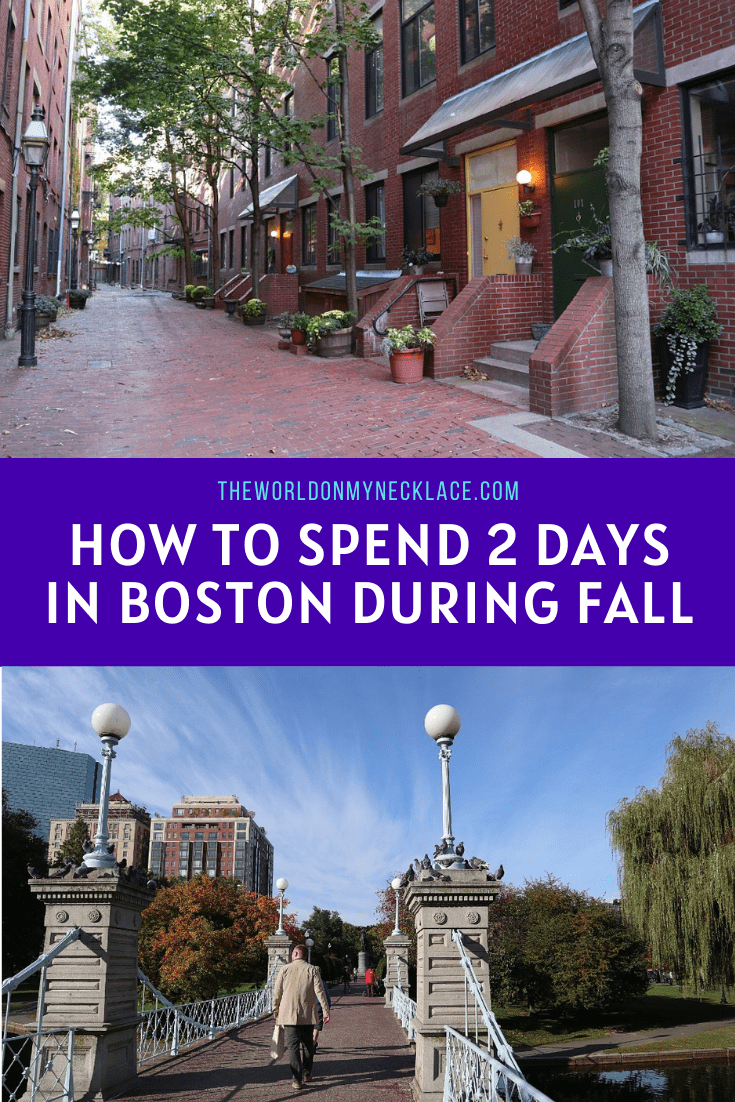 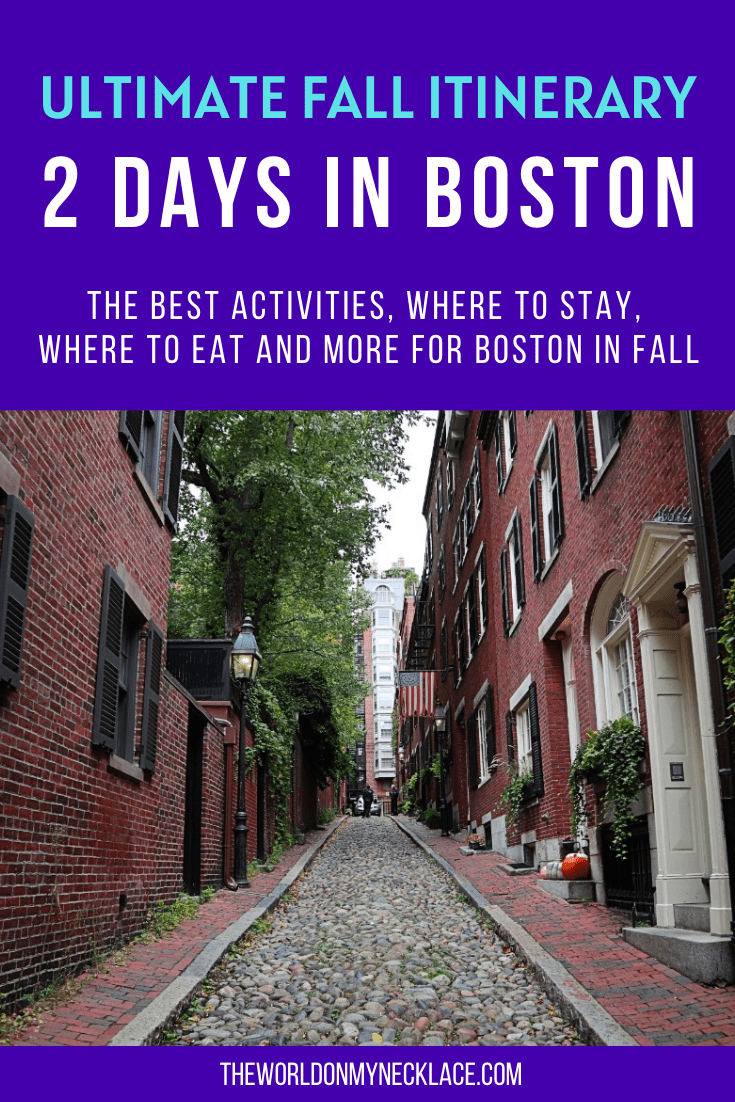