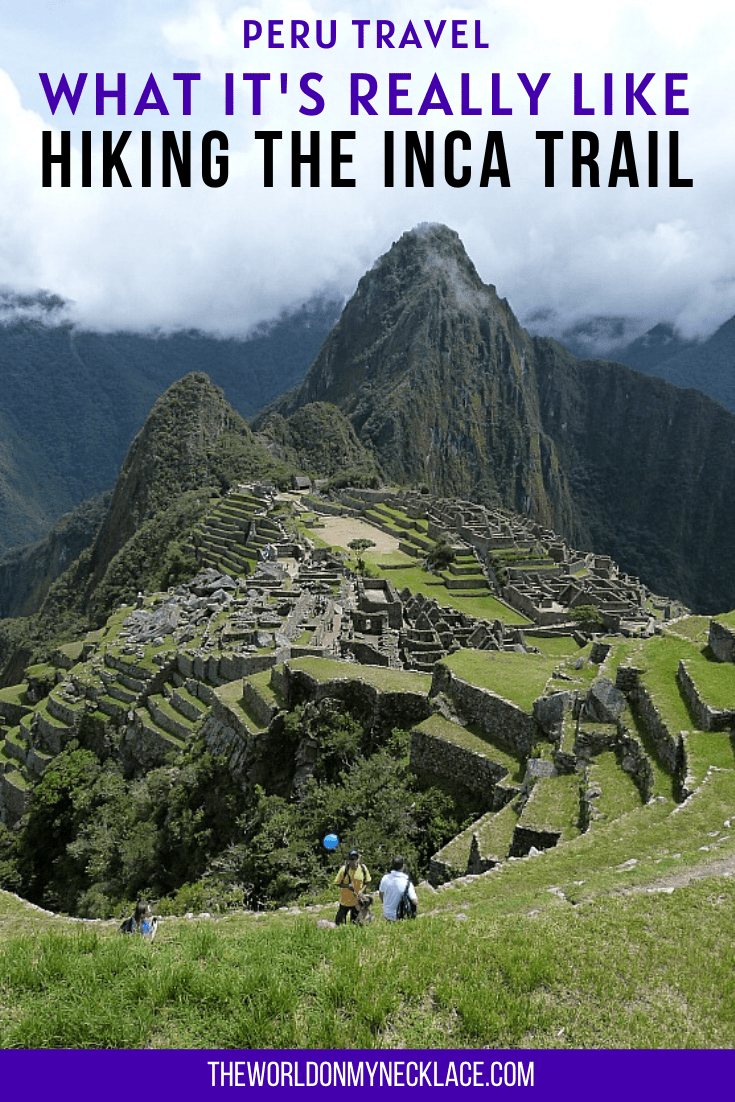 Our epic journey to Machu Picchu began with us getting picked up at 5.30am from our hostel in Cusco by Peru Treks, and driven to Km 82 via a breakfast stop near Ollantaytambo.

This is the start of the Inca Trail and where you sort out your bags, your paperwork is checked and your passport is stamped (special Inca Trail stamp!). 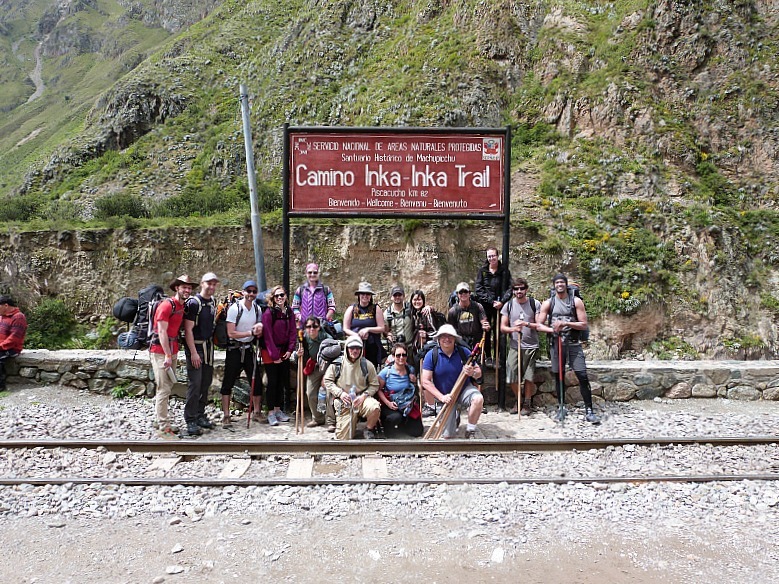 Trav and I paid extra to hire the services of a third of a Porter which meant we only needed to carry small day packs with the Porter carrying our sleeping bags, sleeping mats and some of our other belongings. It was definitely worth it!

We met the other 14 people on our tour and our guides David and Angel. Randomly, there was a disproportionate amount of Teachers from New York and everyone was from the states except us.

We were told that we had to agree on a name for our group and one of the guys was inspired by Robbie’s T-Shirt so we unanimously agreed on ‘The Goonies’. 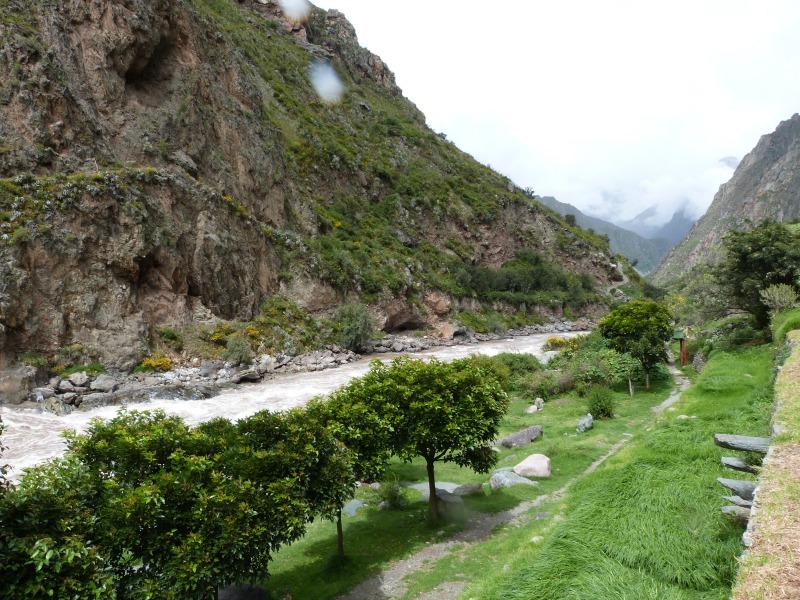 We got started after getting our group photo taken in front of the Inca Trail sign. The first day was definitely the easiest and we had a mixture of rain and sun. We stopped a lot along the way and the 12km felt like a dawdle. 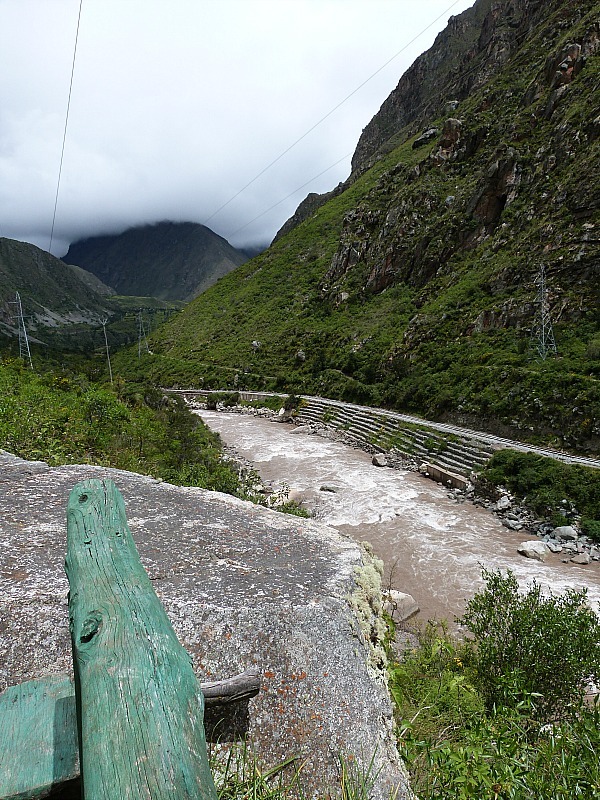 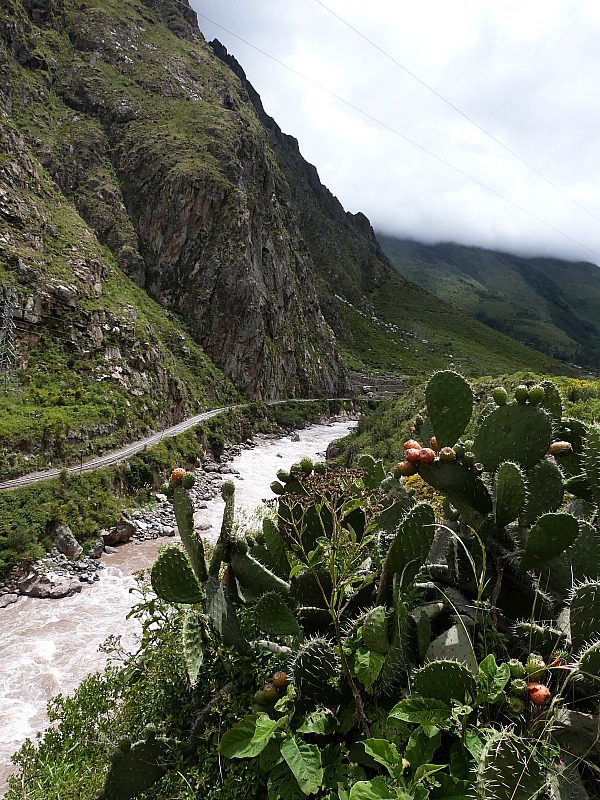 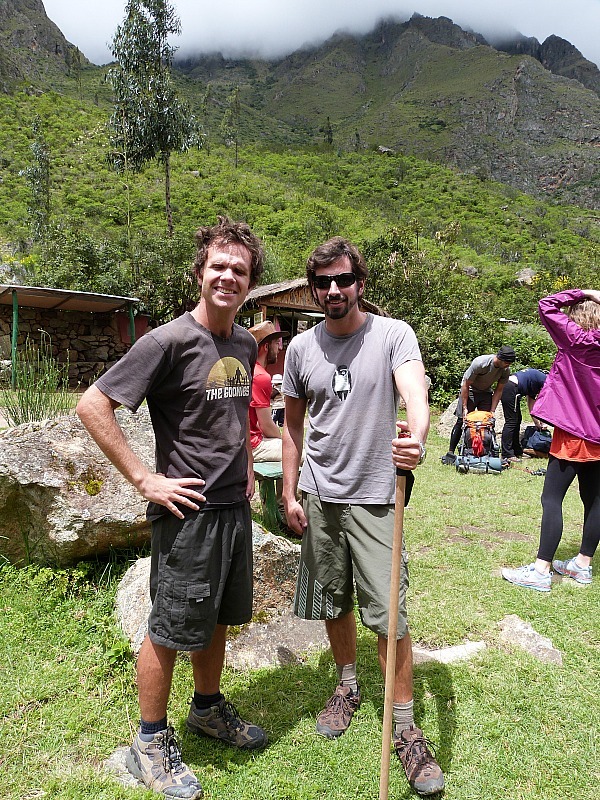 Everyone was very impressed by the quality of the food; we had a three course lunch and everything was delicious. It’s amazing what the chef can do with so little equipment.

We saw a couple of Inca ruins on the first day and some beautiful mountains. It started raining by the time we got into camp so we bedded down until dinner, which was equally as amazing as lunch, then had an early night. 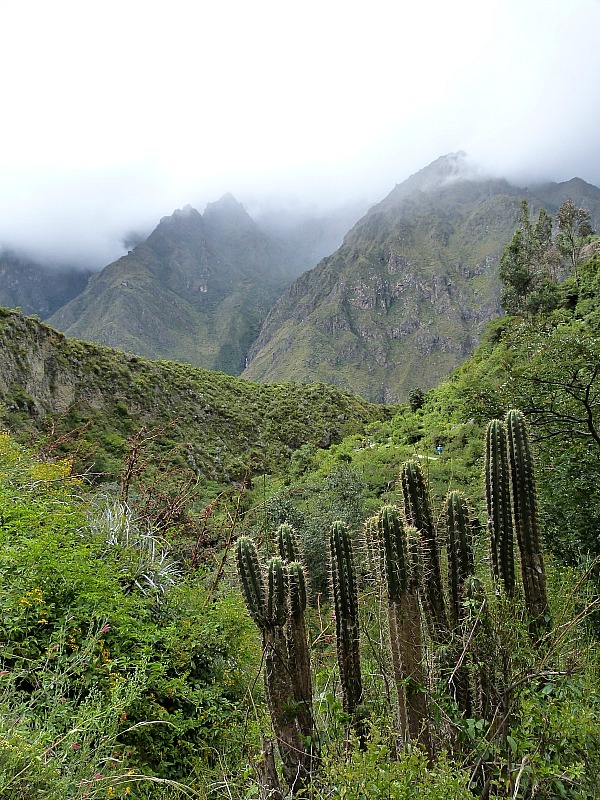 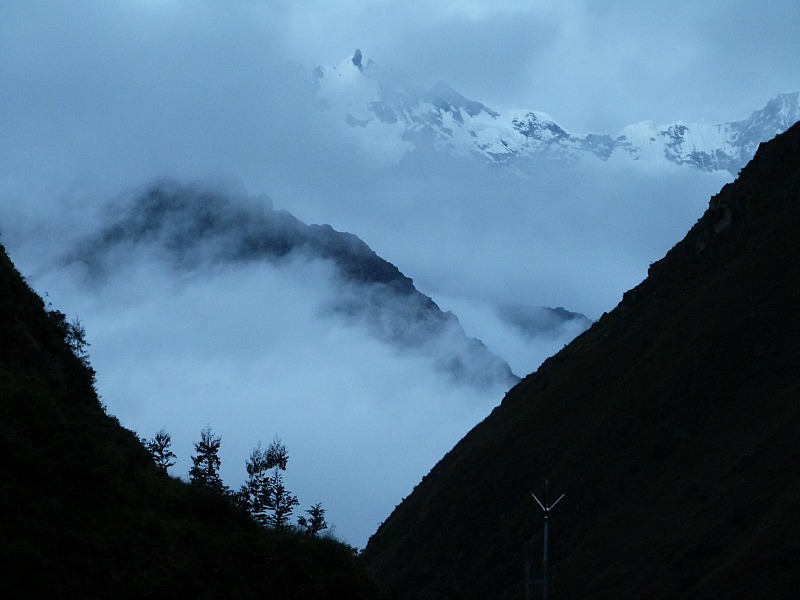 I woke up early on Day two feeling nauseas with a queasy stomach, it was either something I ate or a bad reaction to the altitude (I think it was both), whatever it was, it lingered for the rest of the four day Trek.

Day two is considered by most people to be the hardest as most of the day is hiking uphill. I definitely found it hard due to my lack of energy (as I couldn’t eat much), the nausea and the constant rain which froze me to the bone. 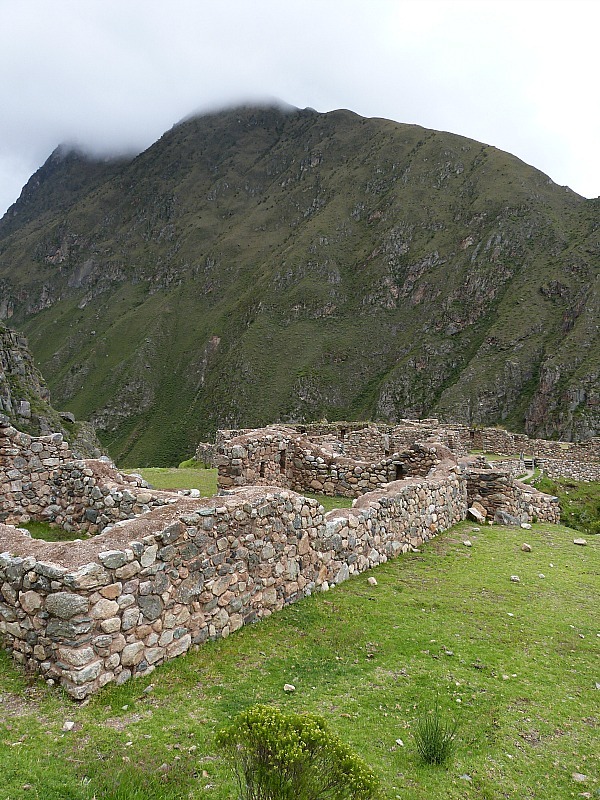 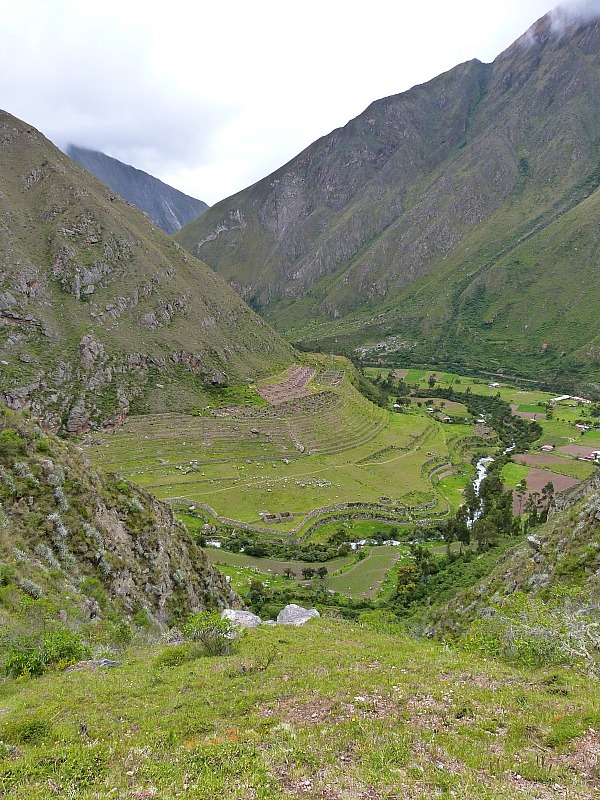 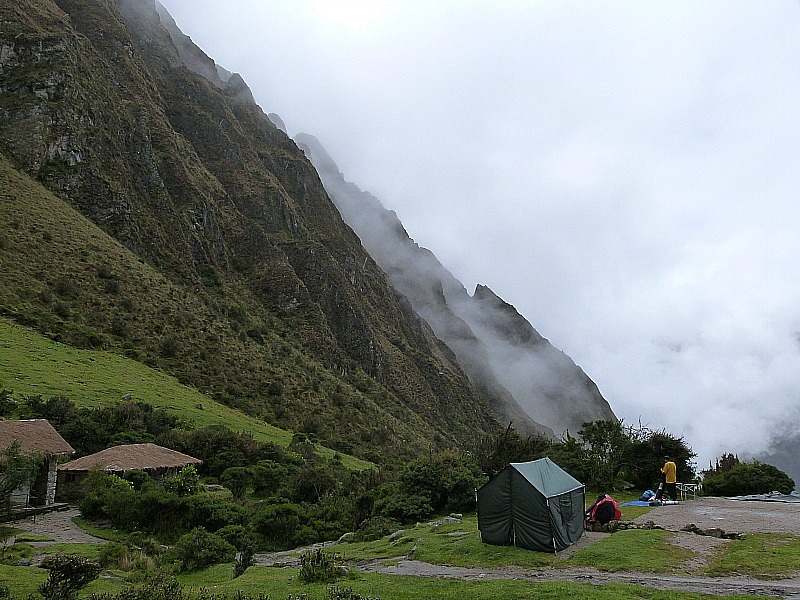 The culmination of the relentless uphill slog is Dead Woman’s Pass which rises to 4200m above sea level.

I really struggled the last hour with the high altitude making me feel even more nauseas and light headed and I don’t know how I physically did it in the end – it is one of the hardest things I have ever done. Goonies never say die! 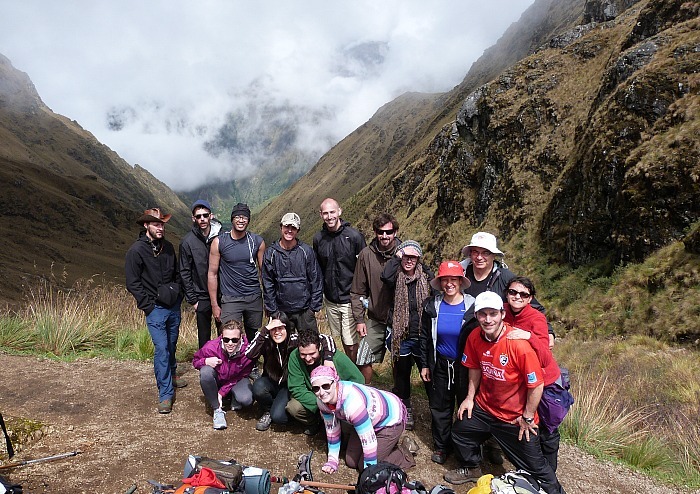 After a long rest at the top we had another few kilometres down the other side of the pass to our campsite past some beautiful waterfalls, the sun even came out for a bit. 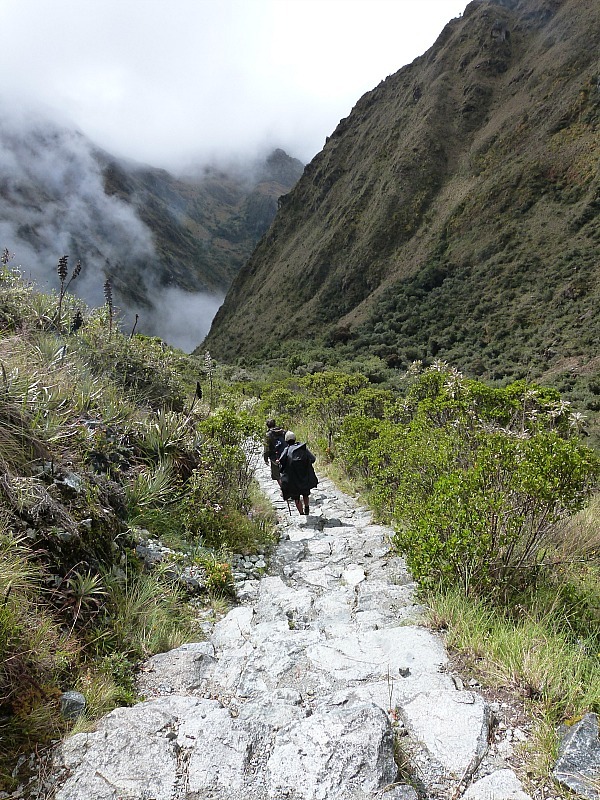 Once we finally got to our camp I collapsed in our tent and didn’t re-emerge for the rest of the day. Ibuprofen had been helping keep the nausea at bay but I had a rough few hours from 3am when it stopped working and I had to brave the freezing temperatures to spew outside the tent a couple of times.

At this stage I honestly didn’t know how I could go on with the Trek feeling so sick, but luckily once I got up the next morning I found that being upright was much more agreeable than lying down and I managed to push on.

Day 3 was a looong day, it was 15km and we were on the go from 7am until we got to our camp in the late afternoon. The first section was uphill for about an hour and a half and was miserable with the ever present rain and low cloud.

After that we had a lot of downhill to our lunch spot. Passing a few llamas very closely on the way down caused a bit of a traffic jam as everyone was stopping to take pictures.

I was feeling a lot better by lunchtime and thought it would be OK to eat something, unfortunately this made me feel really sick again and I had a tough couple of hours before I felt marginally OK.

In the afternoon we saw a great Inca site, Phuyupatamark, which looked like ruins of a Scottish Castle perched on a cliff side and surrounded by mist. 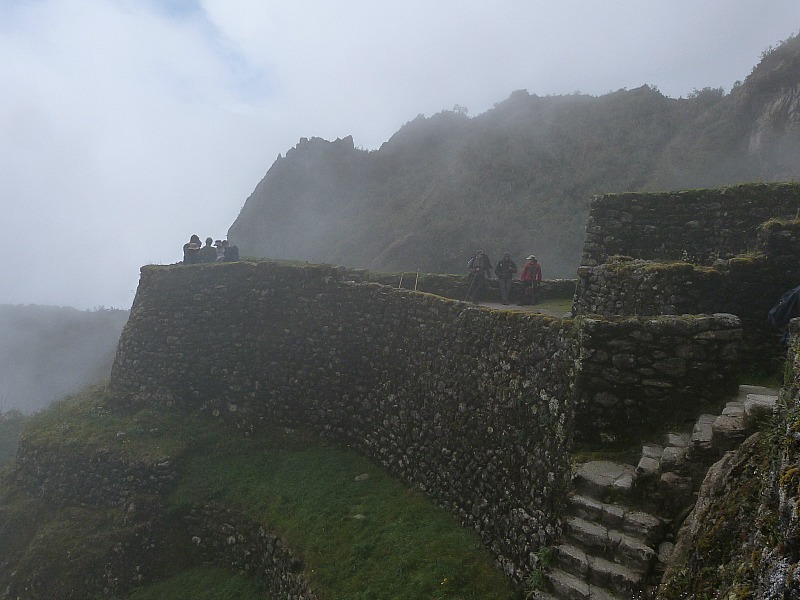 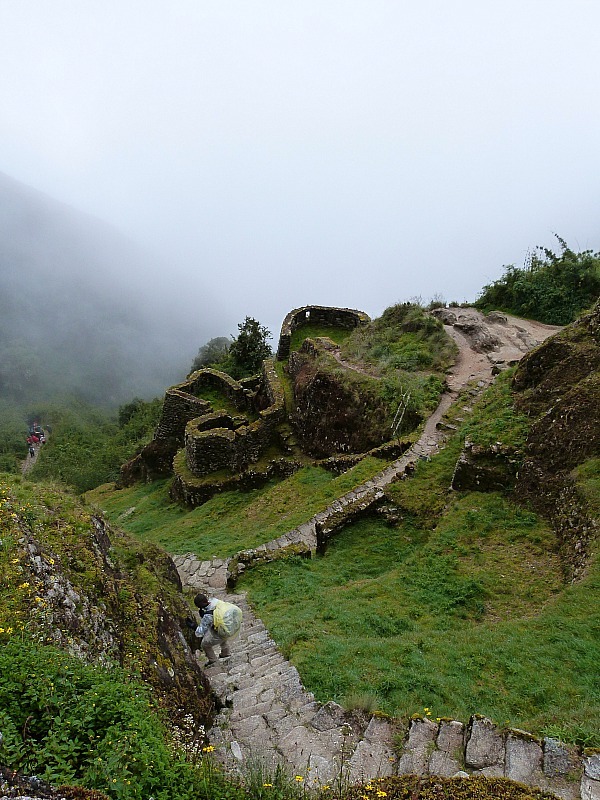 There was a lot more downhill after that until we got to Winay Wayna which is a tiered Inca ruins with stunning valley views, just above our campsite of the same name. I was feeling a lot better at this point and the clouds cleared so we could actually see the surrounding view for once. 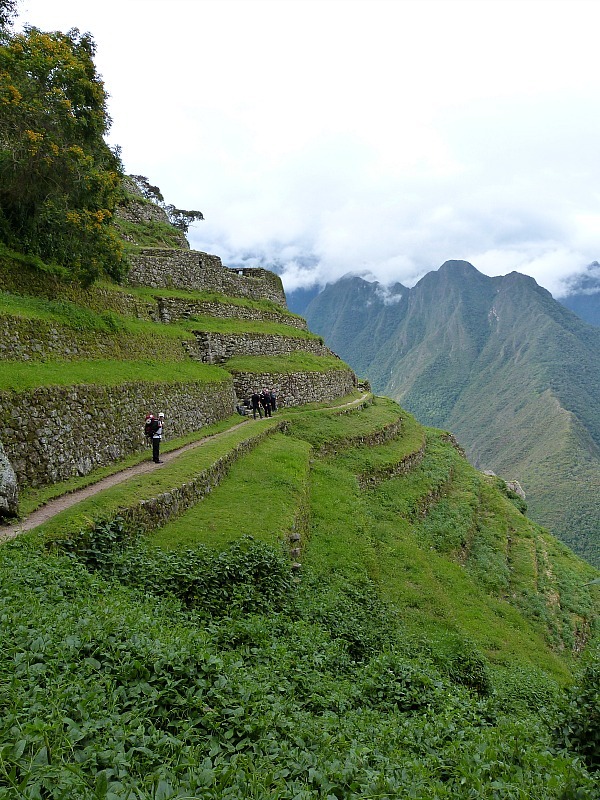 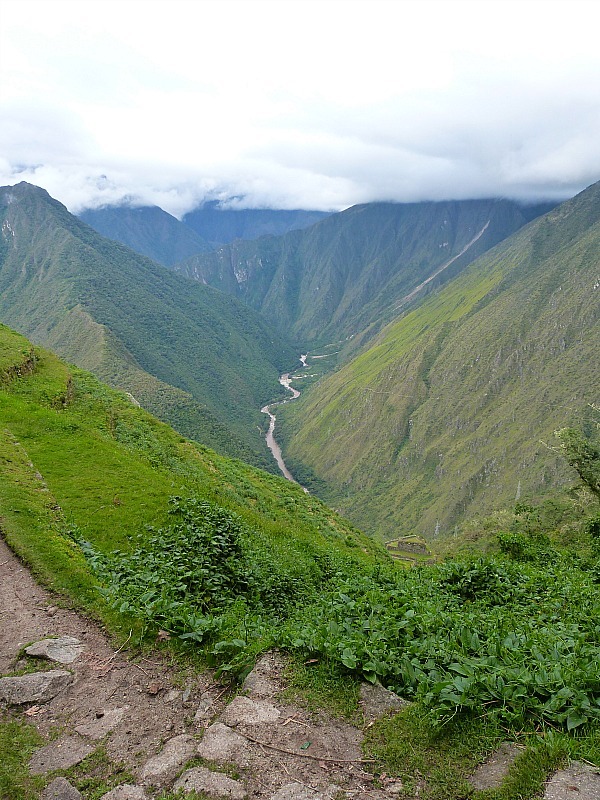 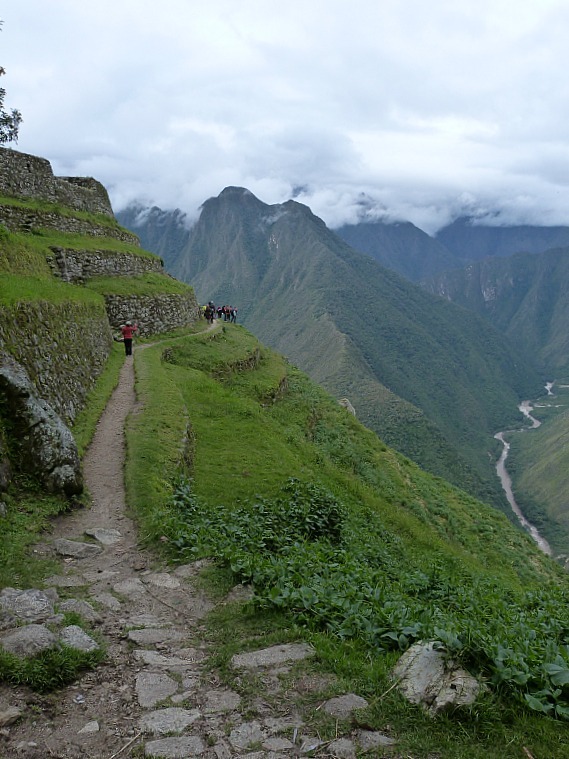 I had an early night with no dinner to make sure I would be OK for the early 3.30am wake up call in the morning for the final push to Machu Picchu.

It was such a nice feeling to wake up and actually feel well, despite the earliness of the hour. We had a quick breakfast then headed to the entrance gate to wait for it to open at 5.30am. It was an hour’s walk from there to the Sun Gate where you can get your first glimpse of Machu Picchu.

Of course WE didn’t get a glimpse as it was completely covered in cloud so after waiting a while with no change in the cloud situation, we hiked the last hour to get down to the site. 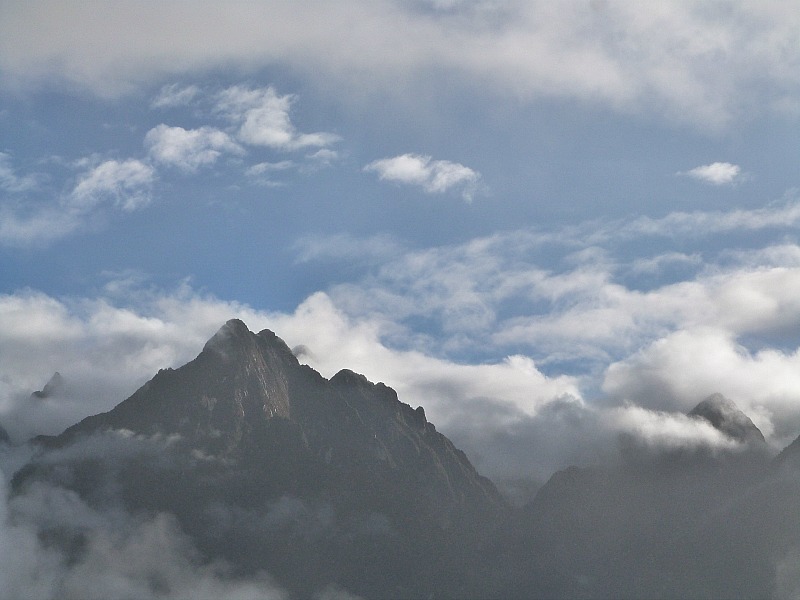 Despite it only being about 7.45am there were already quite a few people there which surprised me. David gave us an interesting guided tour around the site for 2 hours before we had free time. 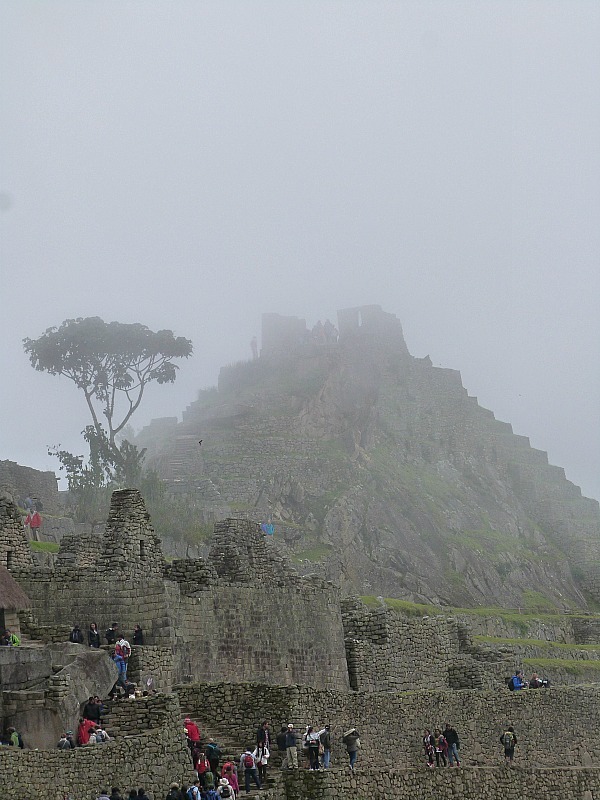 Slowly the mist lifted to reveal the reason why Machu Picchu is so damned famous. Once we could see the iconic mountains backing the site it was truly remarkable.

I can honestly say that Machu Picchu is one of the most amazing places I have ever seen and we soaked it up for the next few hours, wandering the site and taking hundreds of pictures. 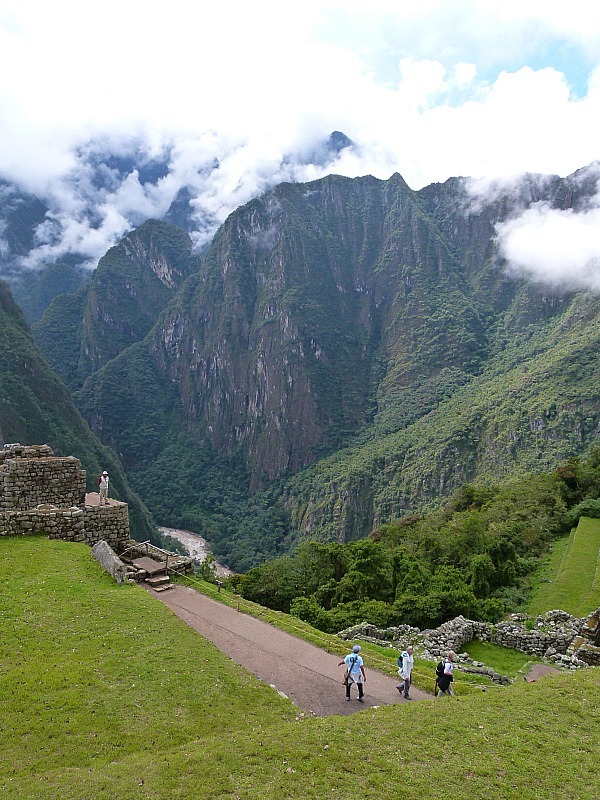 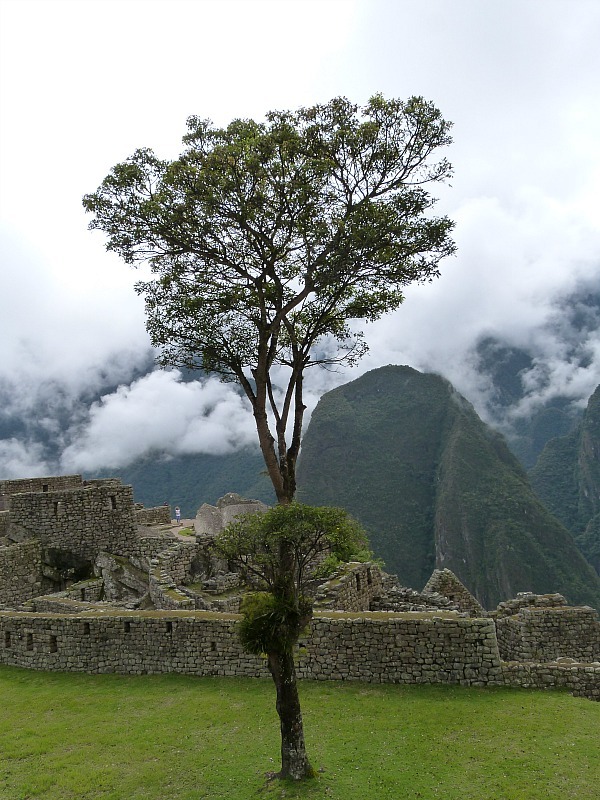 We sat in the long awaited for sun with the famous postcard view of the site laid out beneath us – it was priceless and almost worth my suffering through the previous couple of days. 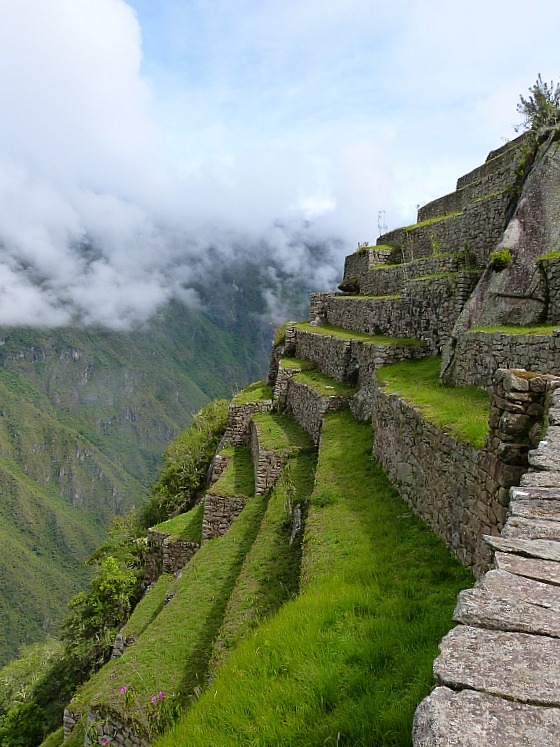 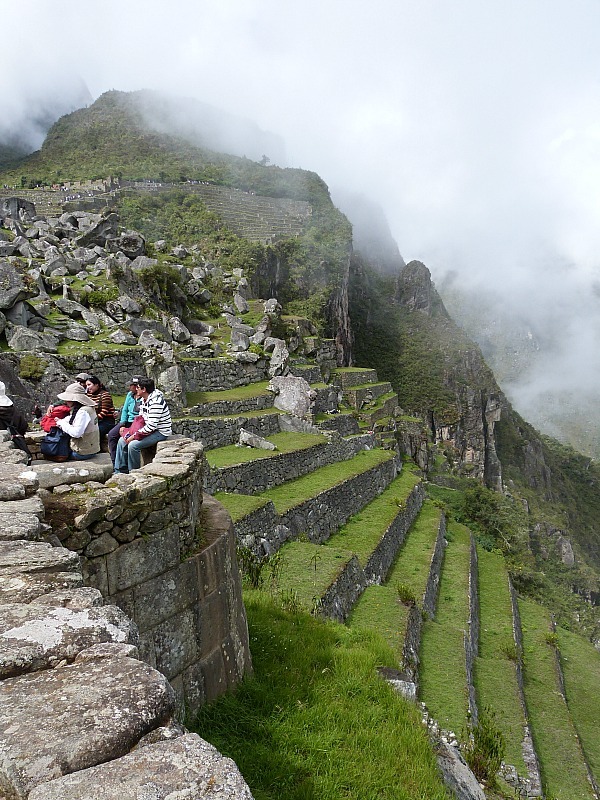 After getting our fill of Machu Picchu we headed down to Aguas Calientes, the tourist town nearest to the site. We had some overpriced and soggy pizza then I watched while the others got drunk which was actually quite fun.

We played some cards then we started the long schlep back to Cusco by train and bus.

We arrived back exhausted at 10.30pm, said goodbye to the others on our tour, had a much needed shower then crashed. It was a novel experience to be warm and in a dry bed! 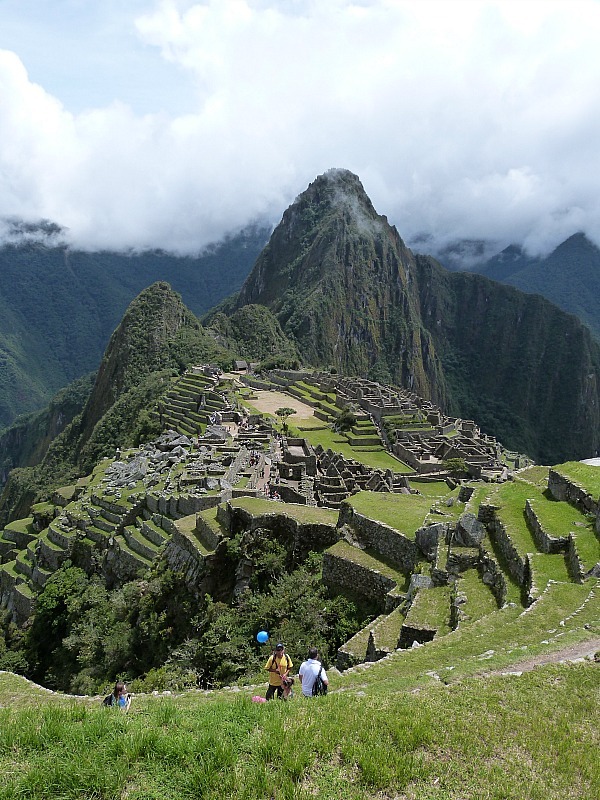 To sum up my experience, the best things about the Inca trail was meeting some awesome people, the food (unfortunately I couldn’t eat much of it because I was sick, but what I did eat was great) and the splendor of Machu Picchu itself.

The bad was the weather (I wouldn’t recommend doing it in the rainy season), being sick, the insane amount of people also doing the Inca Trail, smelly squat toilets and the mattresses not being thick enough.

I definitely feel like I accomplished something, it is amazing what you can do when you don’t have a choice.

If you enjoyed this post, check out my other multi-day hiking posts: