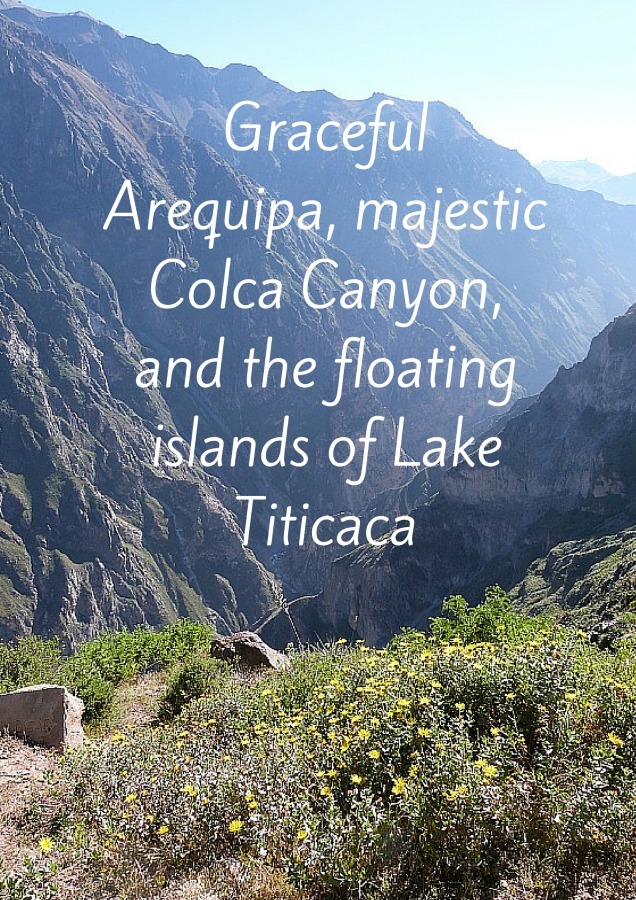 We arrived in Arequipa after possibly the worst night bus yet, replete with seats that hardly reclined and no leg room.

As it was only 6am, it was too early to check into the hostel so we waited in the TV room watching movies before our room was ready. I was feeling pretty terrible but managed to have a bit of a look around town and enjoyed a vanilla latte in the splendid Plaza de Armas. 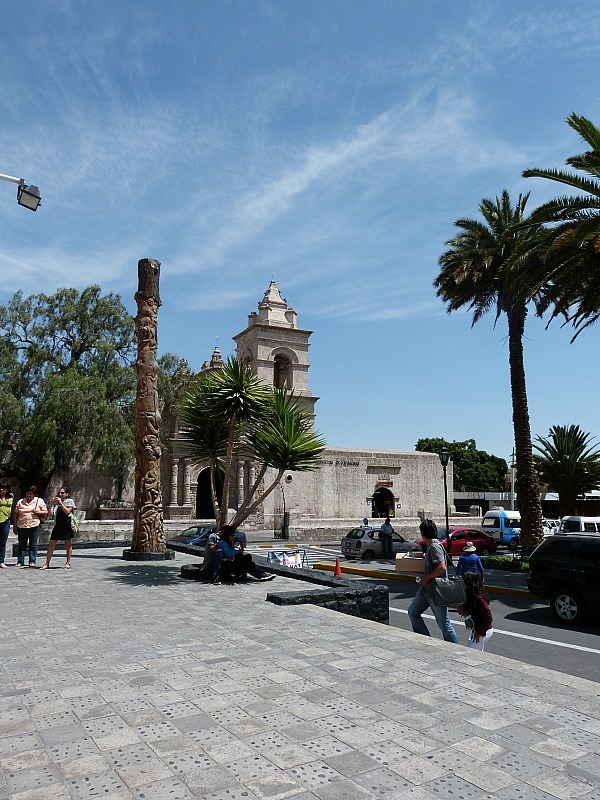 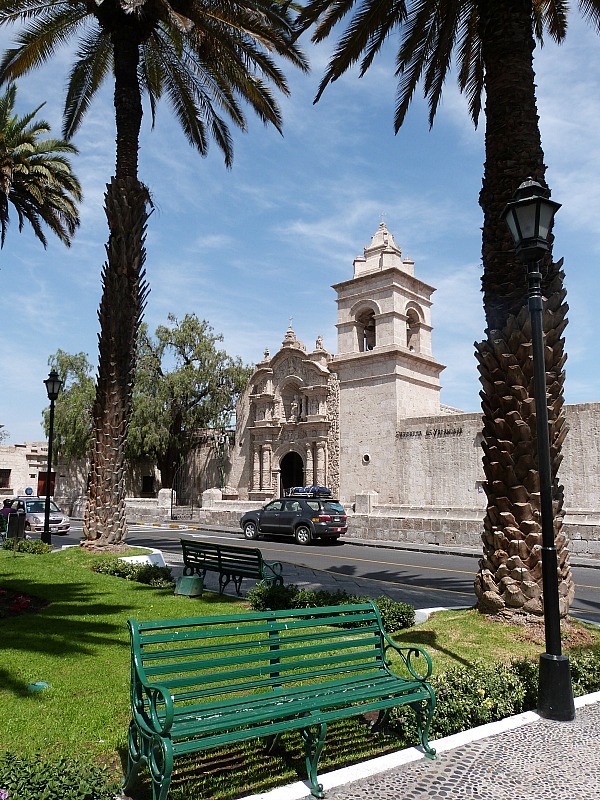 We got out and about more on our second day, visiting the Yanahuara suburb with fantastic views of the surrounding volcanoes, the fantastic Museo Santuarios Andinos where we had an English speaking guide who told us about Juanita, a well preserved mummy who was an Inca sacrifice to the gods. 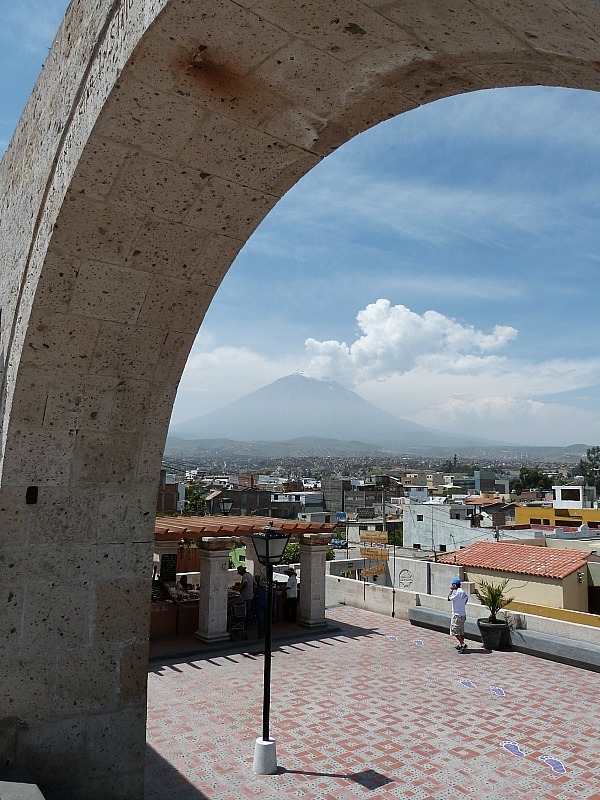 Unfortunately she was in the lab so we didn’t get to see her but there was another less well preserved mummy there and all of Juanita’s clothing she was found in.

Arequipa was a great place to relax at a lower altitude after the Inca Trail and I finally felt like myself again after a week of feeling unwell. 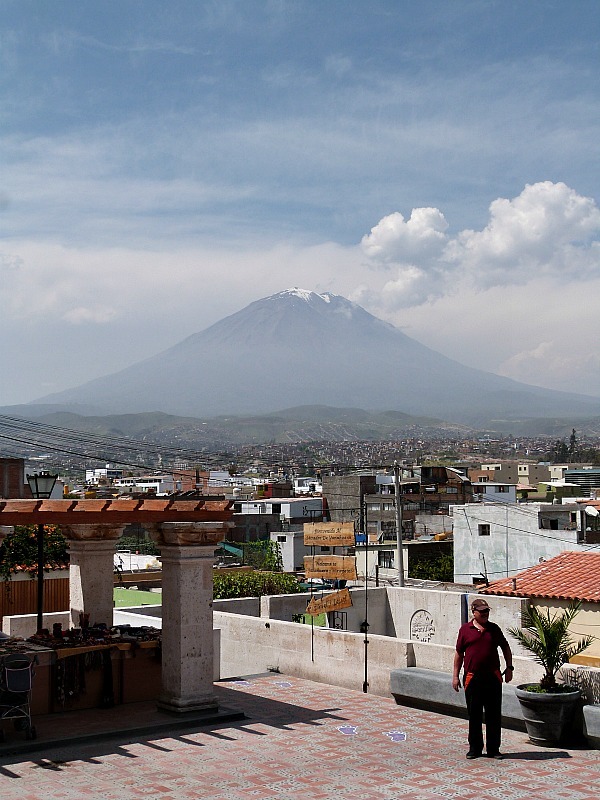 Sitting in the colourful courtyard of our hostel one afternoon I felt my first earthquake! Being from New Zealand, people might be surprised to hear this as there are mini quakes on a regular basis but I have never felt one until now.

It didn’t last long but it gave me a fright. It is kind of a scary feeling as you have no control. Luckily, although clearly felt, there was no damage to the hostel or anywhere else that we noticed.

From shaky Arequipa, we ventured back into altitude to Colca Canyon.

The bus ride was very scenic and I saw lots of Llamas, Alpacas and their shy, deer-like cousin the Vicuna. We stayed in a small village called Cabanaconde which is the starting point for hikes into the canyon.

The hostel owner was really helpful and offered to take a group of us to see the Andean Condor in the morning. He drove us about 20 minutes from the hostel to a viewpoint called Cruz del Condor which is known to be the best place to see the gigantic birds.

The views into the Canyon were spectacular, I wasn’t prepared for how beautiful it would be.

Colca Canyon is thought to be the deepest canyon in the world and is twice as deep as the Grand Canyon. We saw a couple of condors straight away but they didn’t come that close to us.

I would have been content with that but then two of them started flying back and forth right in front of us. They are beautiful birds with black and white feathers and are absolutely massive with a wingspan of three metres. 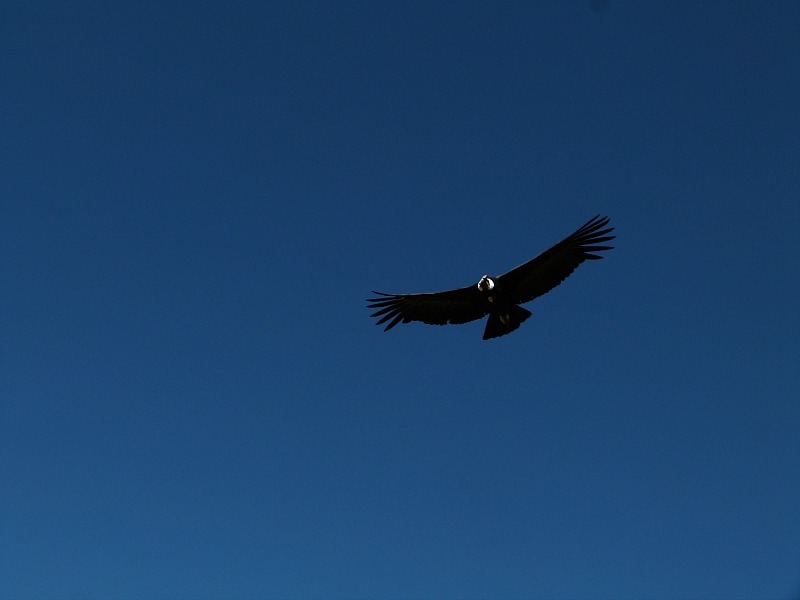 After getting dropped back at the hostel we left our big bags there and set off for three days of trekking in the canyon.

We undertook the trek by ourselves, but you can also join a Colca Canyon tour if you are traveling by yourself or would prefer to be guided. 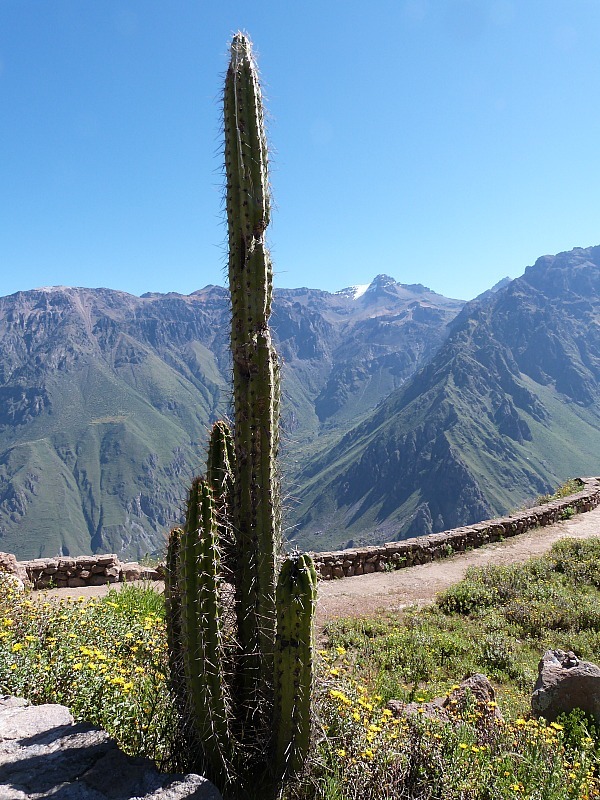 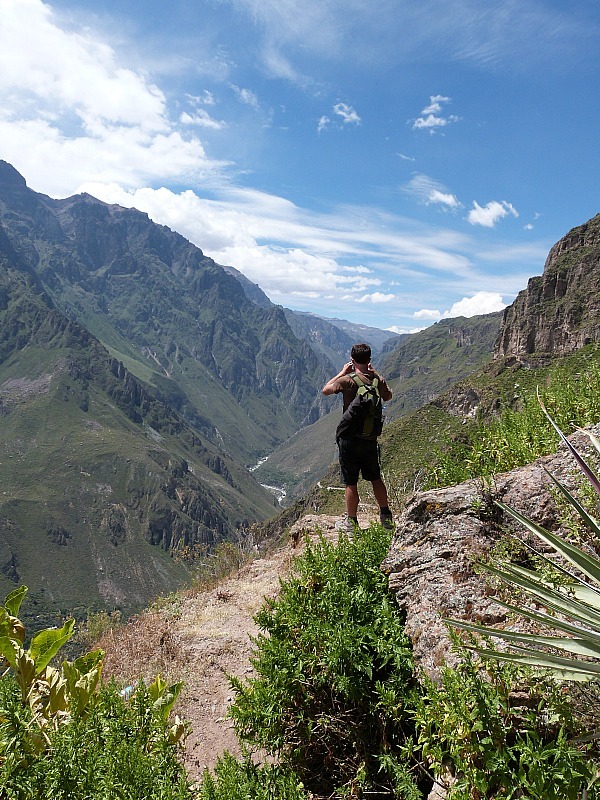 The first day we walked down into the canyon to a village on the other side of the river at the bottom called San Juan de Chucho. The hike was amazing but the closer we got to the bottom, the more intense the heat got. 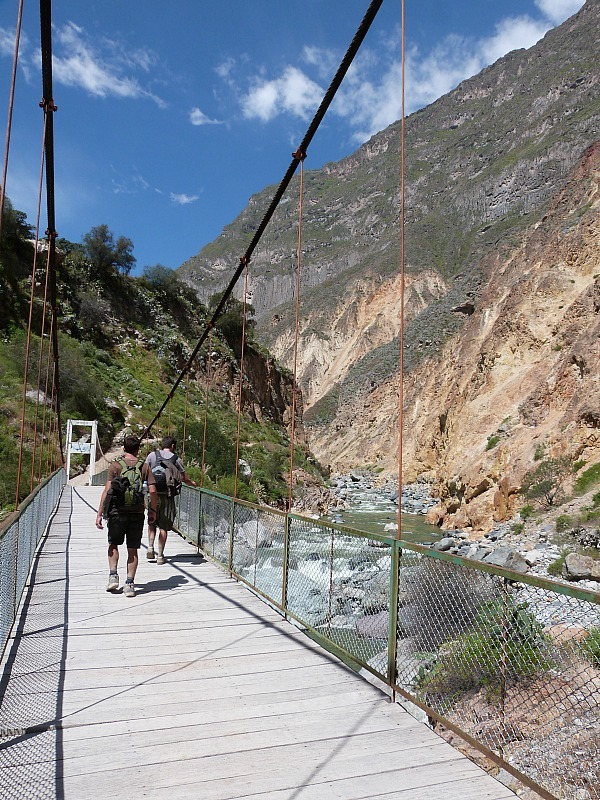 We started at about 3300m above sea level and dropped down to 2300m. The landscape was quite dry but rather green with lots of cacti and wildflowers. We stayed at a simple place with no electricity or hot water, but comfortable beds. It was run by a little old lady who we found ploughing her own fields with a hoe, they build ‘em tough over here. It was so peaceful and the sky was so clear we saw hundreds of stars as we ate our dinner by candlelight. 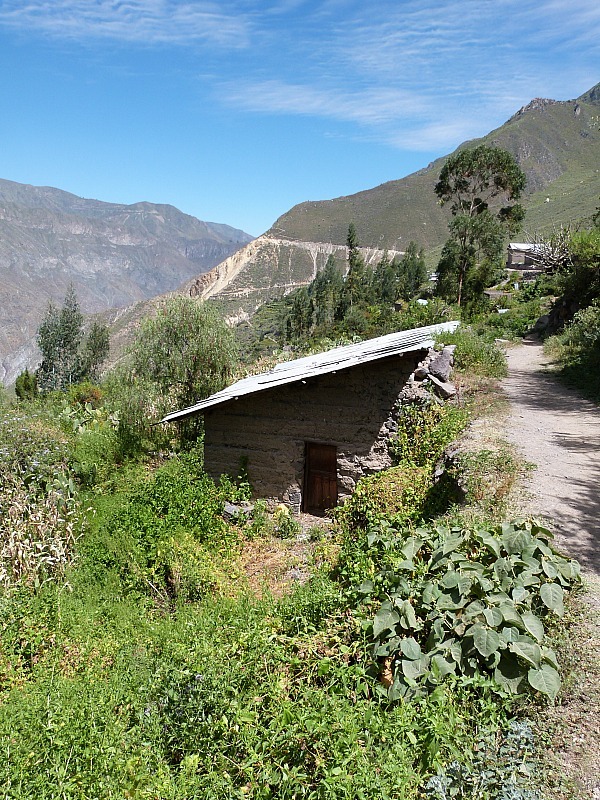 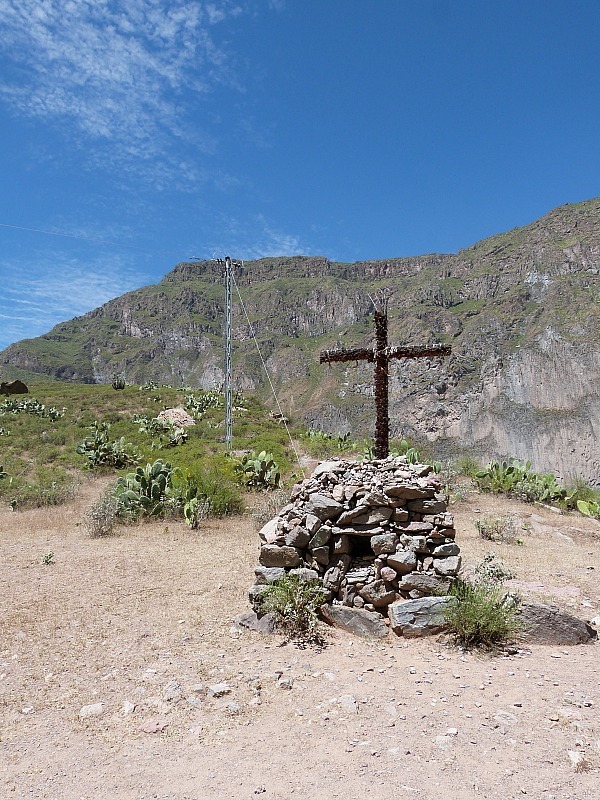 We awoke to another stunning day and hiked to Sangalle which is an oasis further along the canyon.

We had to do a bit of uphill hiking which was tough in the heat, but most of the day was hiking straight along a level path through some more small idyllic villages, then descending for the last couple of kilometres to the bottom of the canyon. 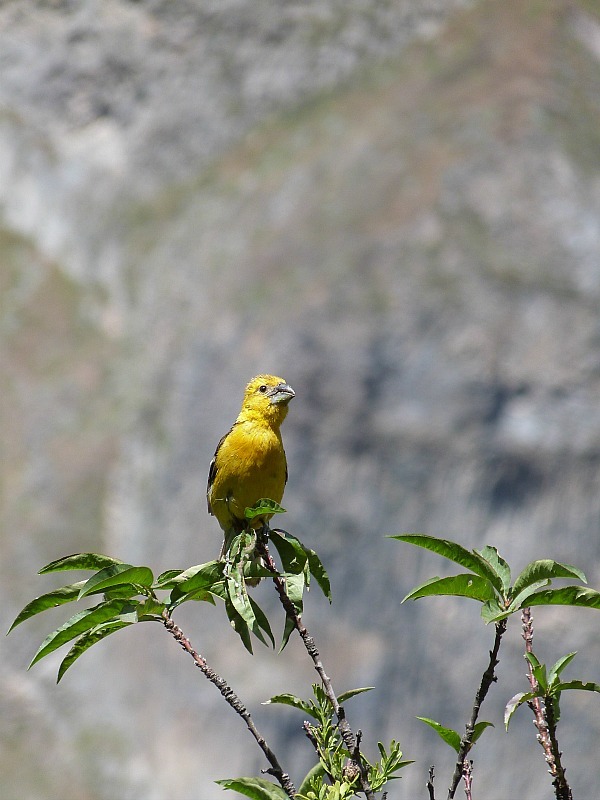 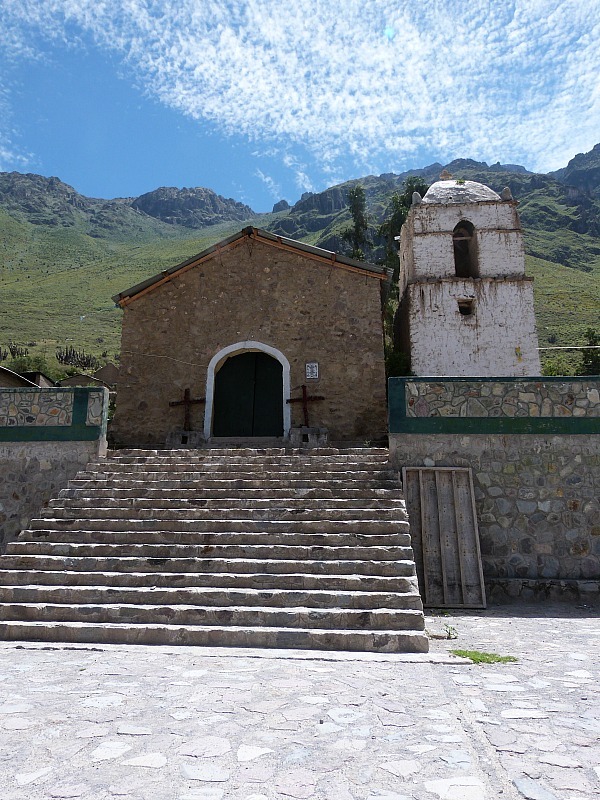 Sangalle consisted of three simple accommodations with swimming pools and restaurants. There were a lot of palm trees and banana palms so it did indeed feel very oasis-y.

It was so hot at the bottom of the canyon so we went swimming and sunbathed the rest of the afternoon. 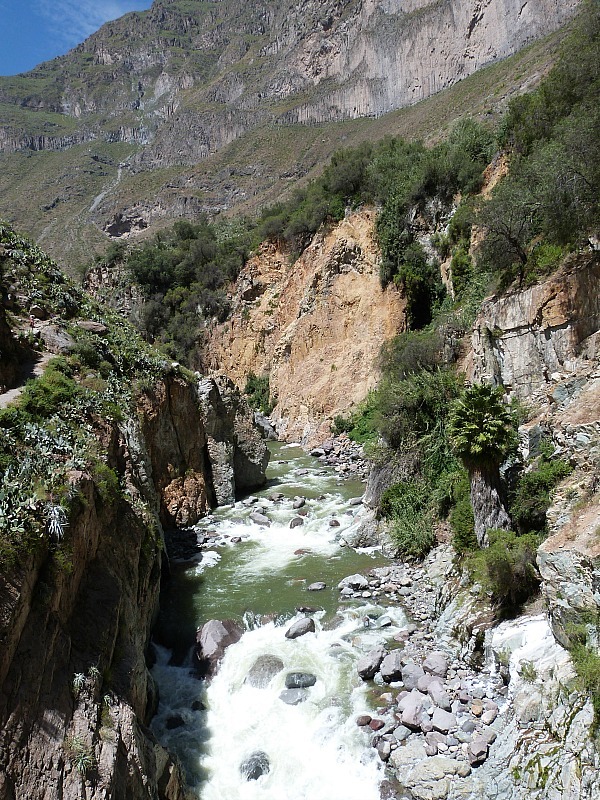 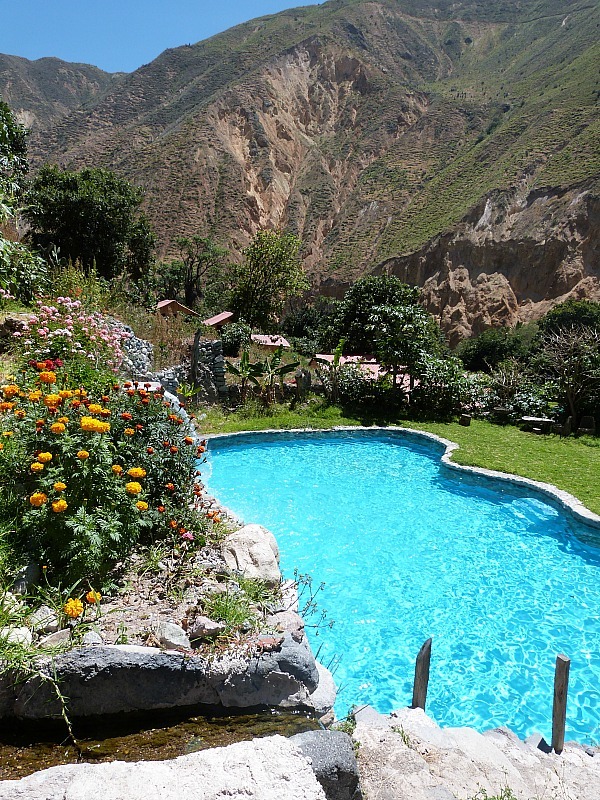 We were up early on the last day to hike out of the canyon before it got too hot. It took about 2 hours and 40 minutes to hike out and was hard going. 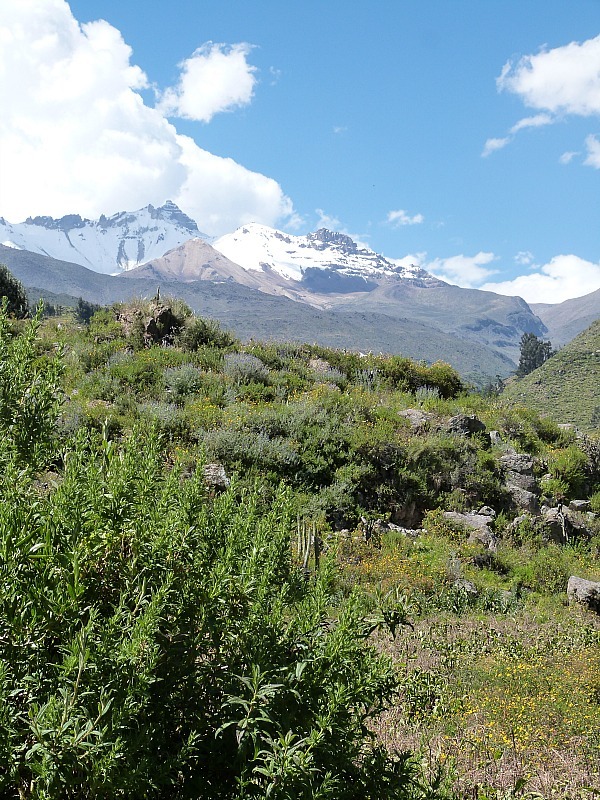 We grabbed the rest of our stuff then bussed back to Arequipa for another night before heading to Puno on Lake Titicaca. On the bus we saw a couple of guys, Austin and Bozo, that we had met in the Canyon and we ended up travelling together for the next week.

There was more spectacular high altitude scenery on the bus to Puno, lots of Llama herds and beautiful lakes.

Puno isn’t the nicest looking town but it wasn’t as bad as I was expecting. It has a pedestrian street with some good restaurants and bars and we met two of Robbie’s friends and some of their tour group at a small bar and pizzeria for some high altitude drinking.

It was a fun evening and the two beers I had went a long way. 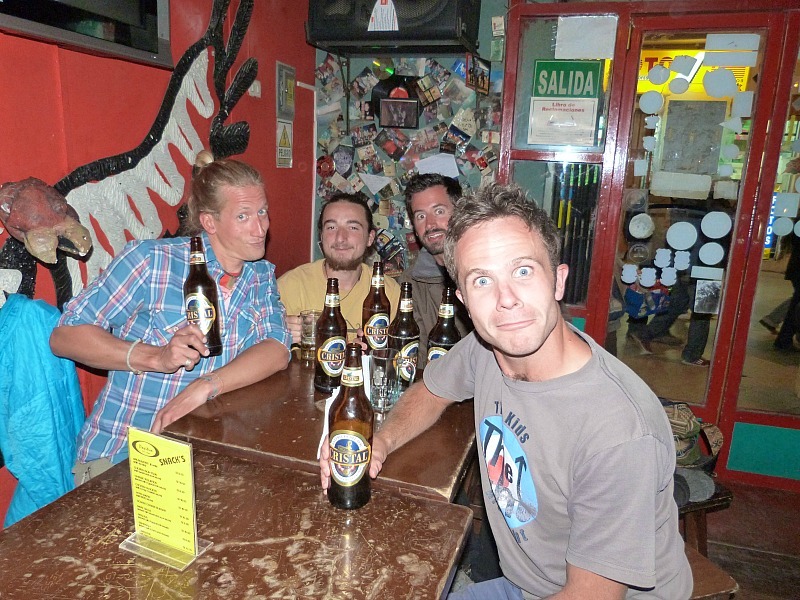 Trav got his Bolivian visa the next day and we did a boat trip to the Floating (Uros) Islands. It was great being out on the lake. I found the colours of everything to be brighter and clearer than usual, probably because of the thin air.

The islands are very unique. They are made of layered reeds that are constantly replenished and the people have been living on them for hundreds of years. It is thought that they first created the islands to escape the Incas or the Spanish. 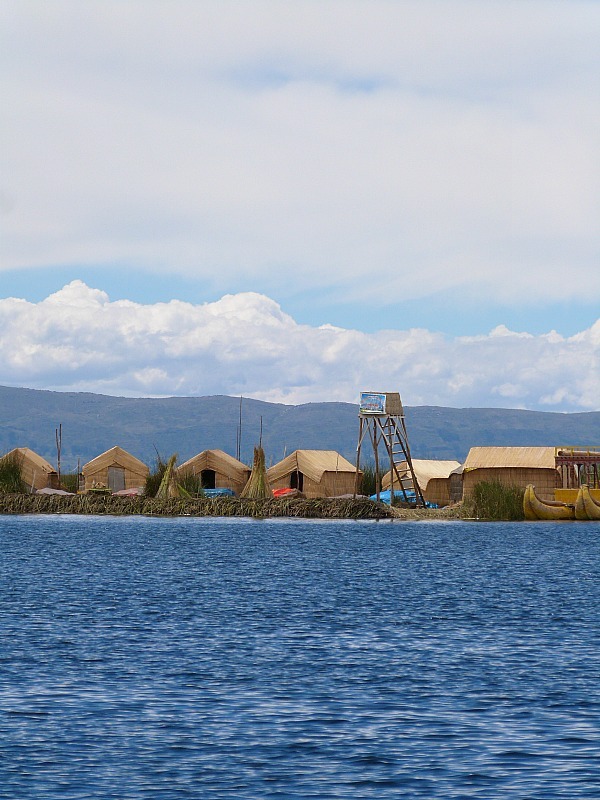 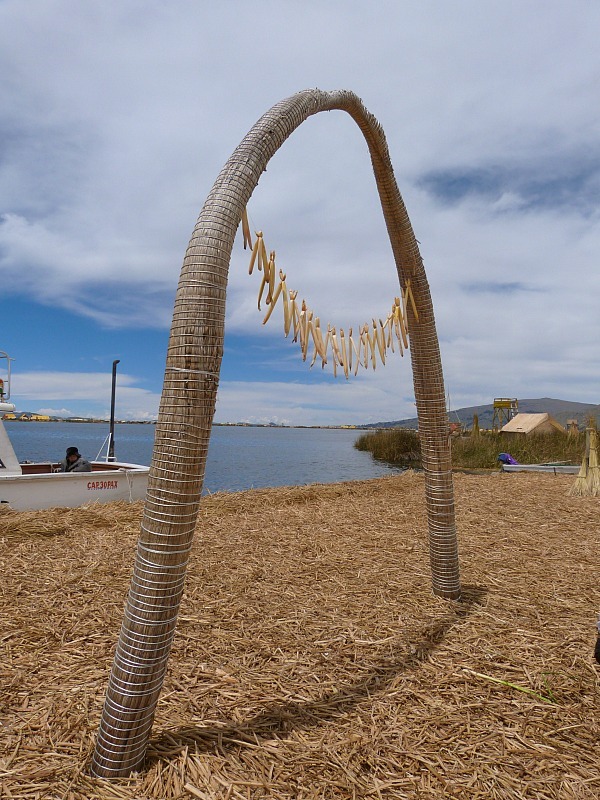 We got taken to a couple of different small islands and got lots of great photos as the contrasting colours and light quality was magical. A lot of people don’t enjoy the tours because they are touristy and they think that the islanders are being exploited. 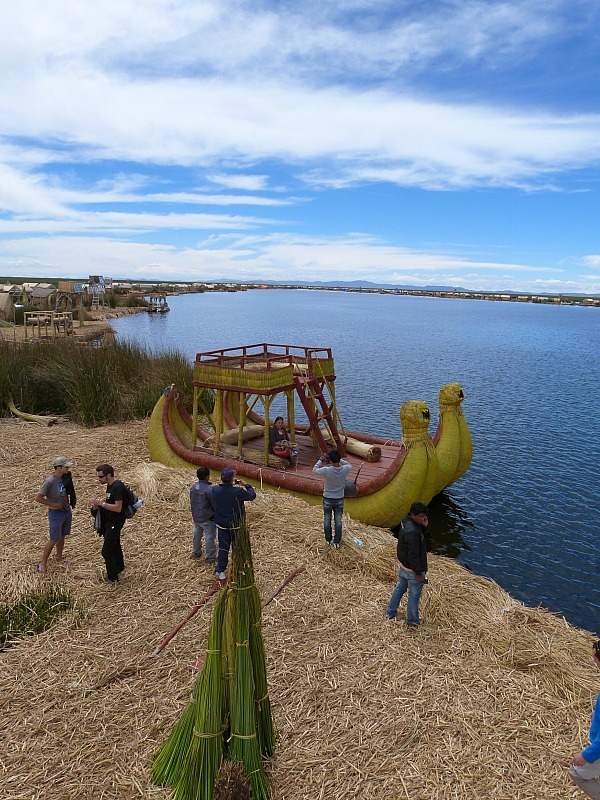 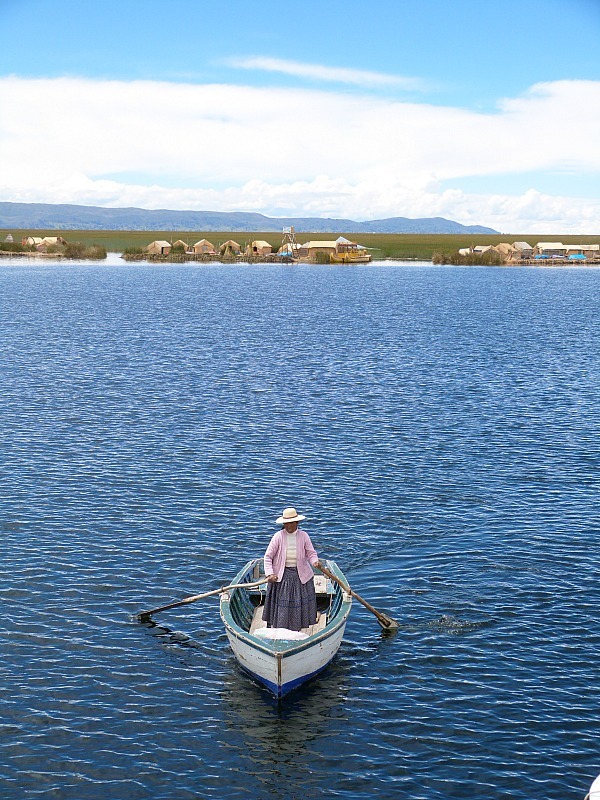 We were told by a few Peruvians that as long as you do the tours with a reputable Agency or independently like us, the money helps the locals and is beneficial to them.

It WAS touristy but not as much as I thought it would be and it was beautiful. I loved their little houses and the painted reed dragon boats that they use to get between islands. 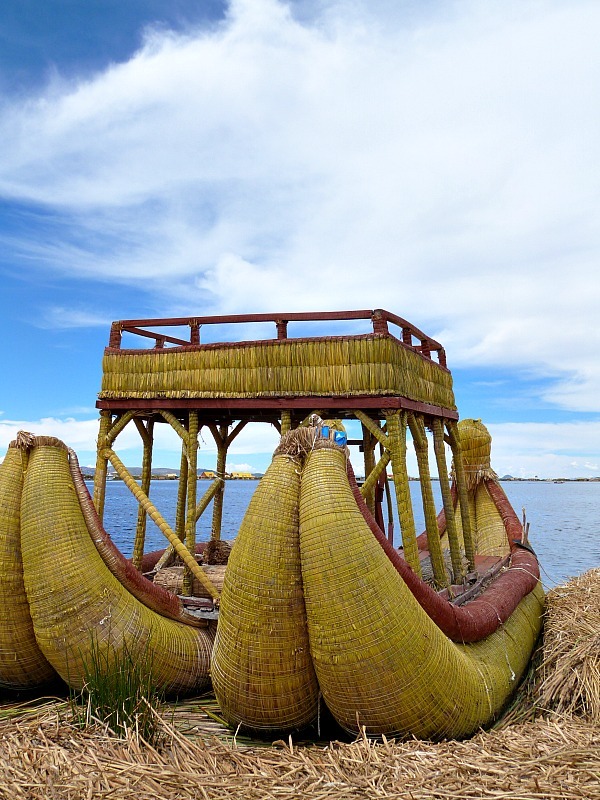 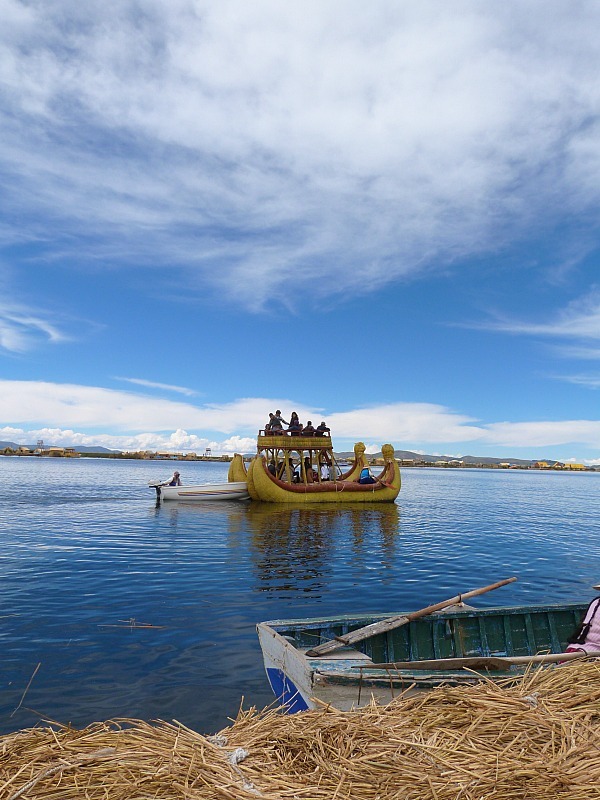 Our next stop was going to be Copacabana on the Bolivian side of Lake Titicaca but there was a strike due to the price of a ferry going up and the roads there were being blocked, so we headed to La Paz instead. 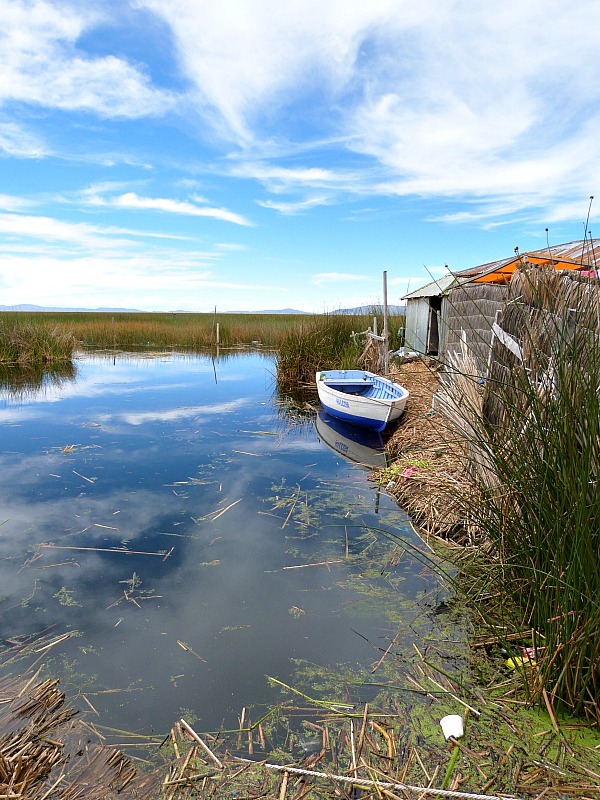 Our last eight days in Peru were fantastic and truly awe inspiring.

Peru really is a land of extremes and well worth exploring.