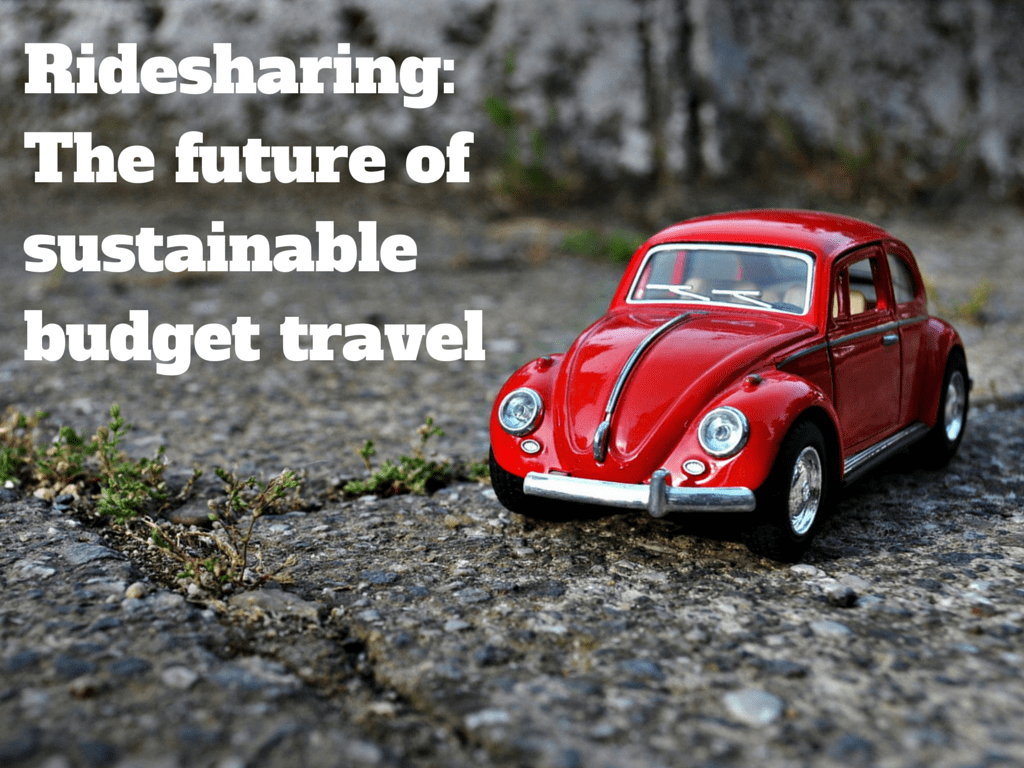 When I was travelling in Canada last year on a very meager budget, I spent hours researching ways to travel on the cheap and during this research I came across ride sharing.

I thought it sounded interesting, kind of like a transport version of Air BnB.

Essentially ridesharing is a form of carpooling, where people advertise their journey on a ridesharing or community website, whether it is a regular commute or a one off trip, and name the price for a seat in their vehicle.

Sometimes the driver will take people for free or to split gas costs, sometimes they want to split the actual driving as well. There are short trips within a city, long trips across the country and everything in between.

I saw a few that were from one side of Canada to the other and as it is the second biggest country in the world, that is a long way!

We ended up using ridesharing a lot to get around Eastern Canada, as buses could be very expensive. There were a wide range of people of different ages and walks of life that were participating, and we met some great people.

On our first rideshare trip between Montreal and Quebec City, we caught a lift with a lovely Moroccan lady who had been living in Quebec City for years. She also took another two passengers, two Buddhist Monks, who were immensely interesting to talk to and were happy to answer questions about their religion.

A free lesson on a religion I am very interested in was just an added bonus of getting from A to B on the cheap.

Saving money was definitely our main motivator behind using ridesharing and we did in fact save a lot, on average we were paying a quarter of the price of a bus and were getting to our destination faster.

We used Maritime Rideshare in the Maritime Provinces, Kangaride for Quebec and also checked Craigslist and Gumtree and found a couple of rides on there.

We were lucky to find matching rides most of the time and saved hundreds on transport. To give you an example of the difference between advertised bus prices and what we paid for a rideshare instead, here are some of the trips we took:

So as you can see, the price differences were massive! Safety could be an issue that may put some people off the concept, especially when booking on community websites such as Craigslist or Gumtree, where the user doesn’t have a profile and therefore no accountability.

A lot of ridesharing sites have put measures in place to create a safer service such as verifying drivers and members.

App driven ‘Dynamic’ or ‘Real time’ ridesharing companies such as Uber and Lyft are very stringent with their security measures and even have special liability insurance for their drivers.

The difference with dynamic ridesharing is that it is a lot more flexible. It is more for one-time rides booked close (within minutes) of your departure time. Also, the drivers are driving people solely to make some extra money, rather than just taking people on a route that they would be driving anyway.

Some ridesharing websites are also branching out into other endeavours. Jayride, a popular ridesharing website based in Australia, New Zealand and the United Kingdom, also offers airport transfers and they are some of the cheapest you will find.

I don’t even live that far from the airport in Sydney but it is still 30% cheaper for me to use one of Jayride’s shuttles than catching a cab.

Ridesharing is not a new idea although it has definitely gained in popularity over the last couple of years with the Global Financial Crisis most likely playing a big part in that. Ridesharing began in San Francisco around 1914 when the US had fallen into depression, right about the time that cars were becoming affordable for the middle class. It quickly gained in popularity across the country.

After street car operators voiced their outrage at the competition, the Government implemented new liability regulations which reduced ridesharing by 90%. Since then the popularity of ridesharing has lived and died at the mercy of government policy.

Unfortunately there are a lot of governments out there now that are following suit. In the US, multiple State Governments are cracking down on ridesharing and it has been banned in many States.

After complaints from a coach company in Ontario, paid ridesharing was made illegal in the Province and it has also recently been outlawed in the State of Victoria, Australia where they are issuing $1700 fines to rideshare drivers who are caught.

I really hope that local Governments can work towards supporting ridesharing in the future, because with more people using these services, the less cars there will be on the road and that can only be a good thing.

If used on a wide scale it would drastically reduce carbon emissions as well as reducing traffic congestion and the need for more parking spaces.

It is an environmentally responsible step forward for transport and should be supported widely.

Overall, I embrace ridesharing as the future of budget and eco-conscious travel. The more widespread and popular it becomes, the better the service will be, with more chance the ride you want will be available.

Will you give it a go?

3 Comments on Ridesharing: The Future of Sustainable Budget Travel