Ecuador
This post may contain affiliate links. If you make a purchase through an affiliate link, I will earn a commission at no extra cost to you. Thanks for your support. 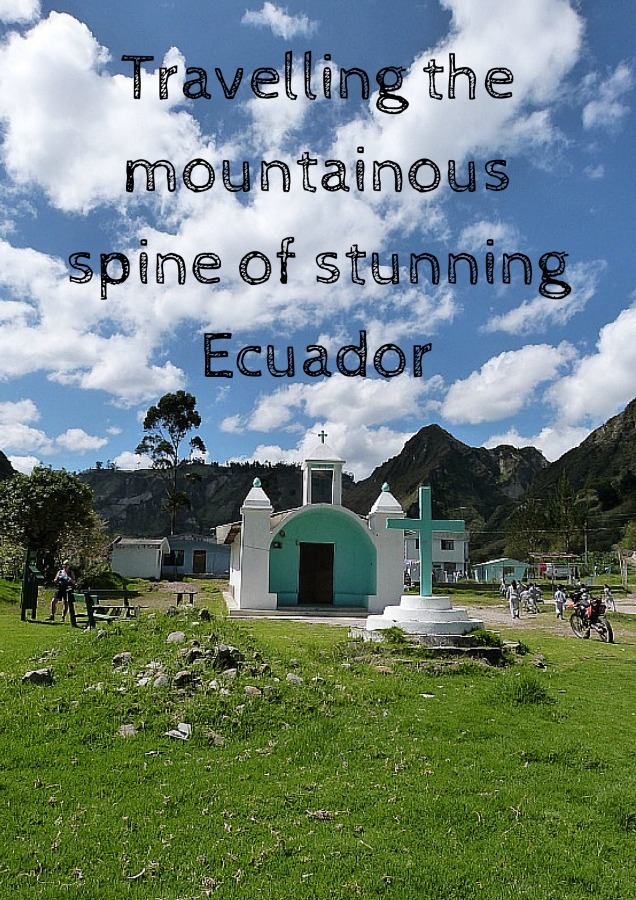 Our last stop in Colombia before crossing into Ecuador was a quick detour to Santuario de Las Lajas, a minor basilica church, built spanning a beautiful canyon.

The church was built against the wall of the canyon where a local girl saw the Virgin Mary appear to her. There is a lot of tourist tat lining the pedestrian street down to the church but it was certainly worth the detour. It was a nice ending to our time in Colombia. 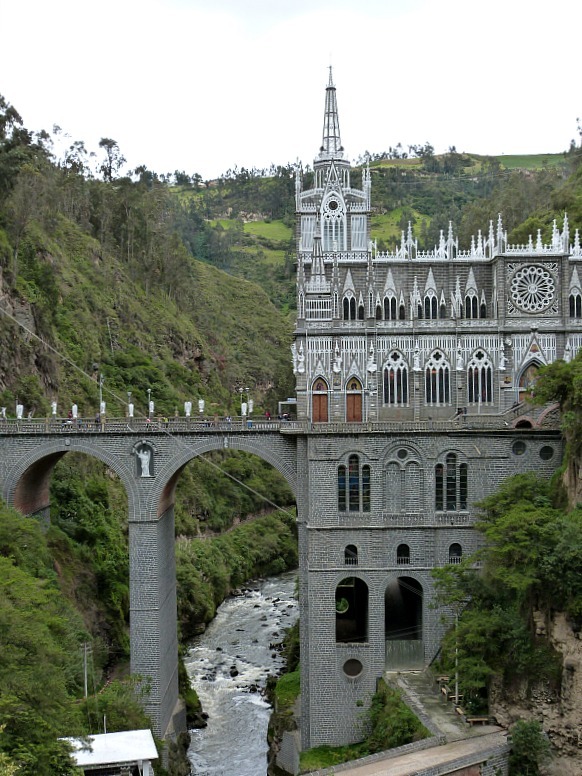 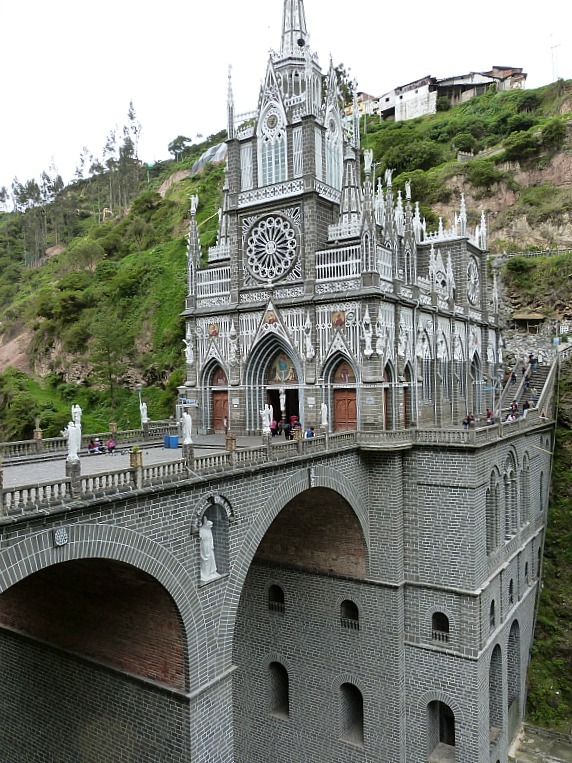 In the end we only had nine nights in Ecuador before we had to start heading down into Peru to make the Inca Trail on time. I had never really thought much about going to Ecuador, I didn’t think there was much there to see apart from the Galapagos Islands which are out of our budget on this trip.

It turned out I was wrong.

Ecuador was a very pleasant surprise. Granted we only had a minimal amount of time there and didn’t even make it to the Coast but what we did manage to see was spectacular.

A lot of Ecuador is in the Andes mountains at quite high elevations. We started in Quito which sits at 2800m above sea level.

Approaching Quito we had a view down from the mountains and it didn’t look like much from above, just a sprawl of dirty looking buildings. We decided to stay in La Mariscal, aka Gringolandia, where there are a lot of hostels, bars and international restaurants.

I was very excited about eating something different than Menu del Dias and the basic dishes we had been cooking.

We arrived in Quito on a Saturday night and La Mariscal was pumping. We went to an Indian Restaurant we had read about in the Lonely Planet and had one of the best chicken kormas and garlic naans that I have ever had at the miniscule price of $3.50. Very good start to our Ecuador journey! 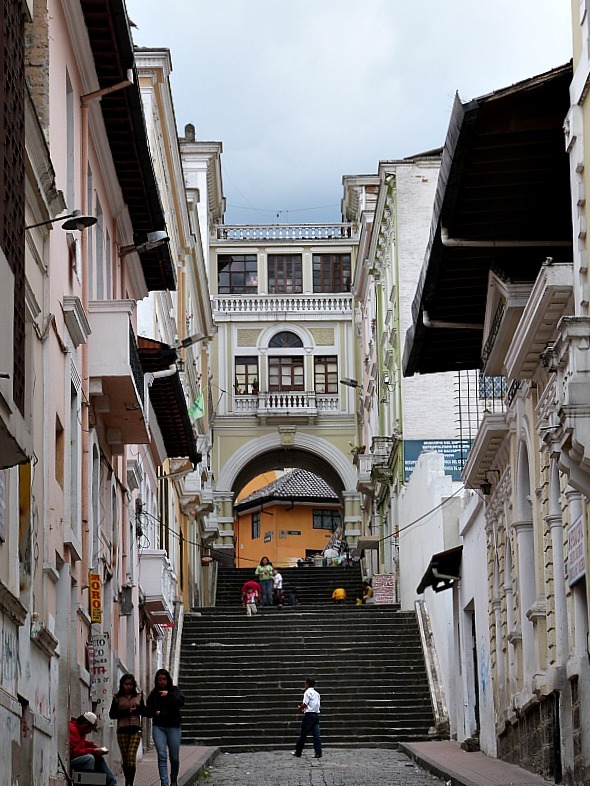 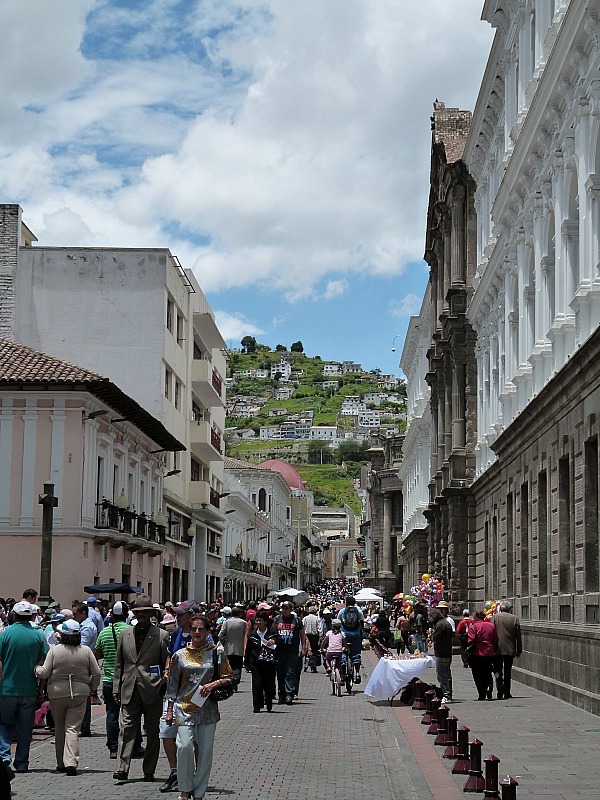 Quito’s Old Town completely blew me away. It is the most beautiful Old Town in Latin America that I have seen. We visited on a Sunday so the Parks and Squares were full of people, markets, street vendors, live music and dancing. There was such an infectious and festive atmosphere and everything was so clean.

Quito has some spectacular churches and colonial buildings and we just wandered around blissfully, admiring everything while the sun streamed down on us. 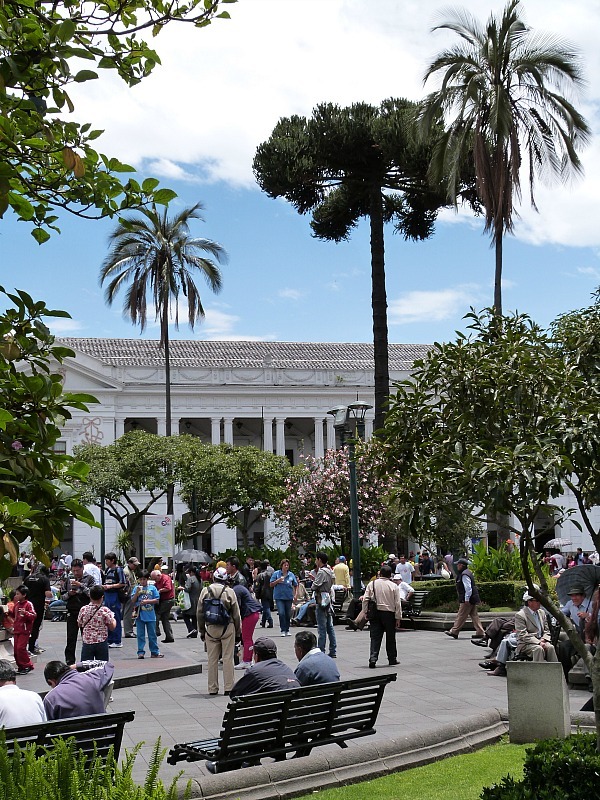 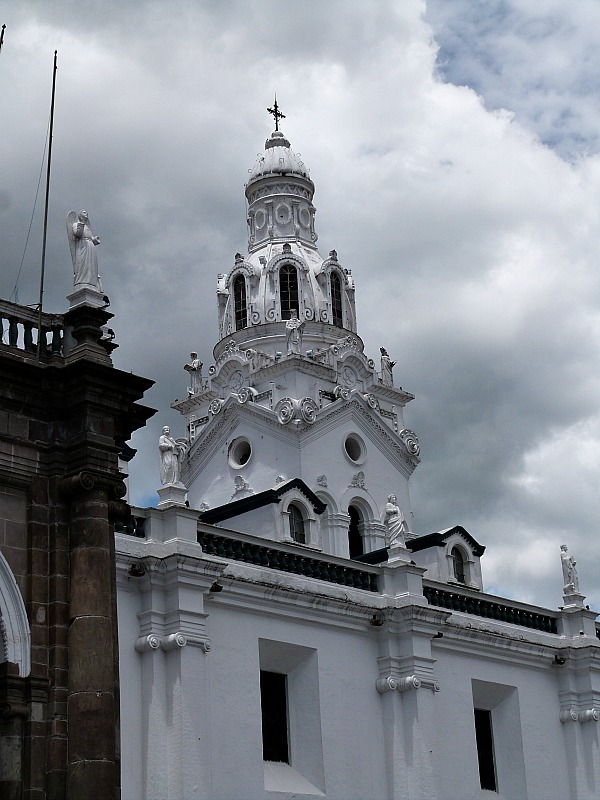 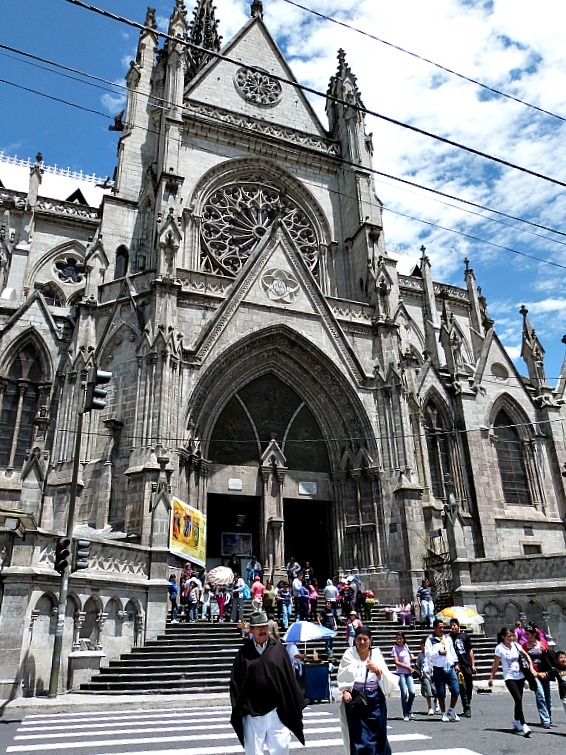 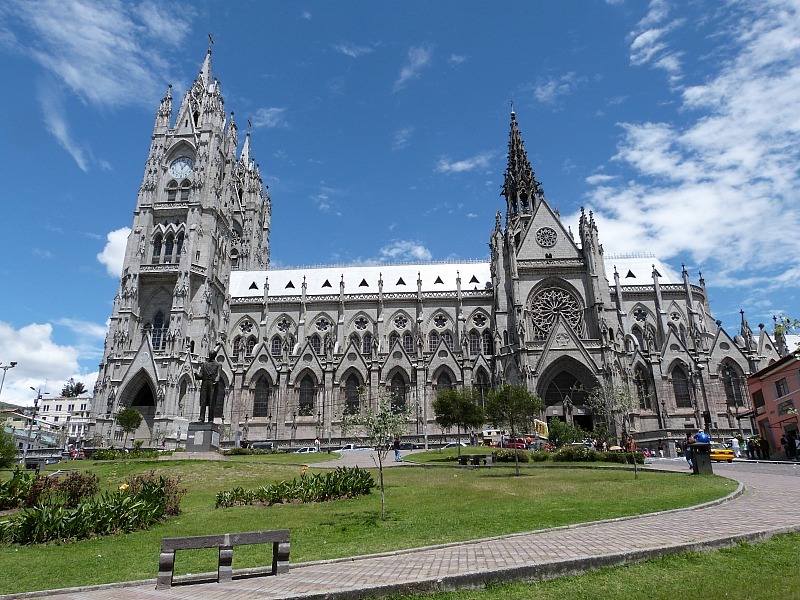 We did a day trip to the Equator line which involved lots of walking and 2 buses, it wasn’t really worth it but we can now say we have straddled the Northern and Southern Hemispheres so I guess that is something. 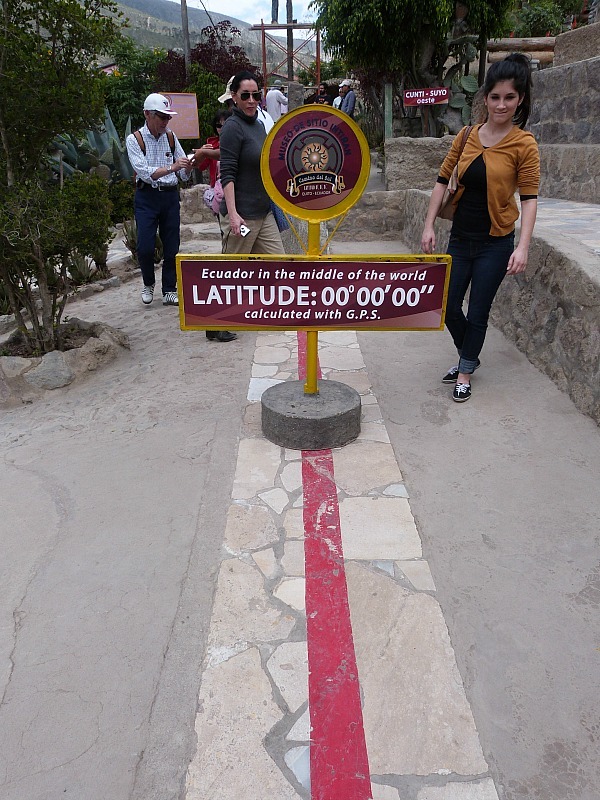 Short on time we hopped on a bus in the afternoon to Latacunga, a town in the mountains south of Quito which is the starting point for the famous Quilotoa Loop. It was me and Trav’s six year Anniversary so we treated ourselves to a lovely meal at a local pizzeria then tucked up in bed early.

The next morning we were up early to get the bus to Zumbahua. There were a few other people from our hostel doing it also so we got talking on the bus.

Once we got to Zumbahua after some delays due to road works, we got in the back of a ute for a quick ride to Quilotoa and the beautiful crater lake where we were starting the Trek. 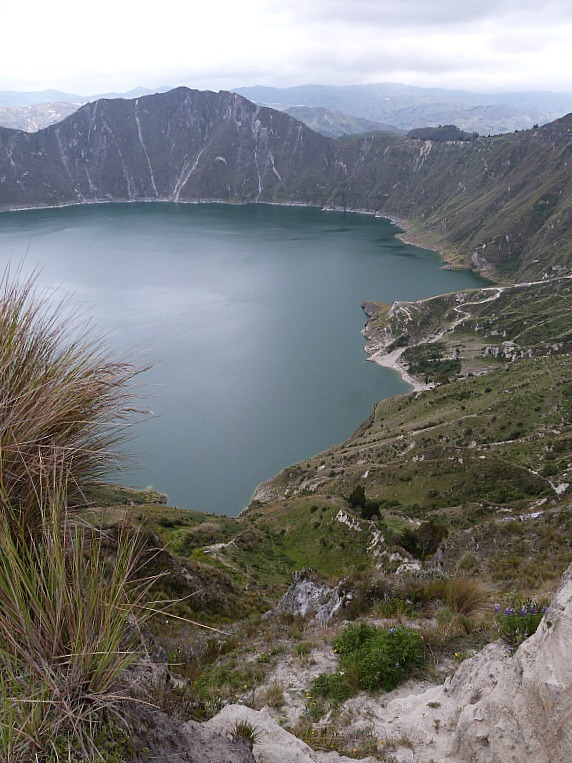 The first day was fairly easy, firstly hiking alongside the crater rim then down a trail to a small village and into a canyon. The weather started out cloudy but by the time we got to the canyon it was clearing up.

The hardest part of the day was hiking up the otherside to the village where we were overnighting – Chugchilan. 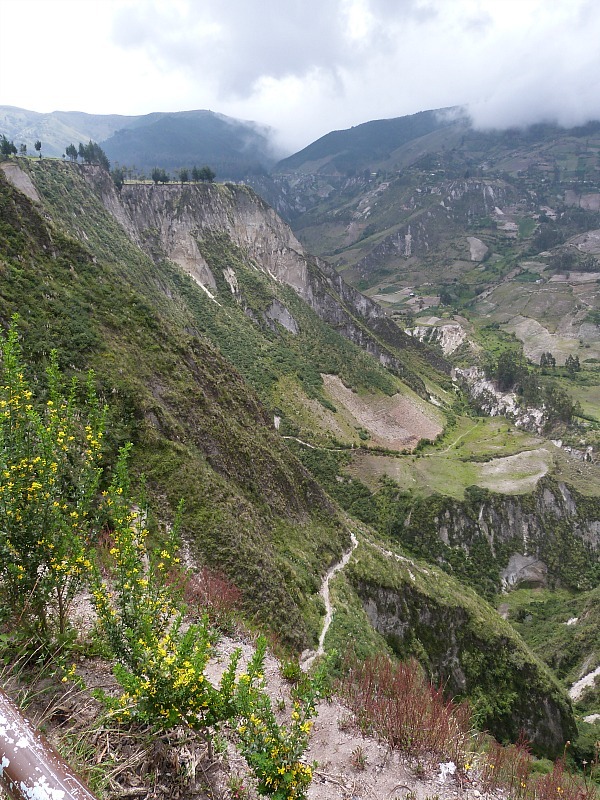 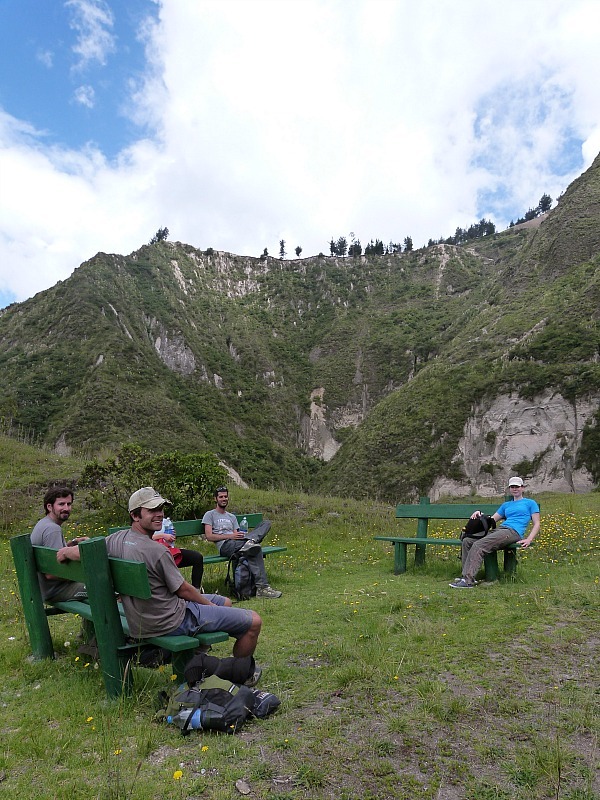 We had some well deserved beers and I was given a quick lesson in Salsa from our Peruvian friend Pedro. After a group dinner most of us had an early night, ready for the next days hiking.

Day Two was even more spectacular than the first day, hiking along a canyon, through another small village and along a river before ascending into the mountains to our stop for the second night, Isinlivi.

The directions we were given by the hostel in Latacunga weren’t the best and we managed to get lost which added about 3km to our hike. 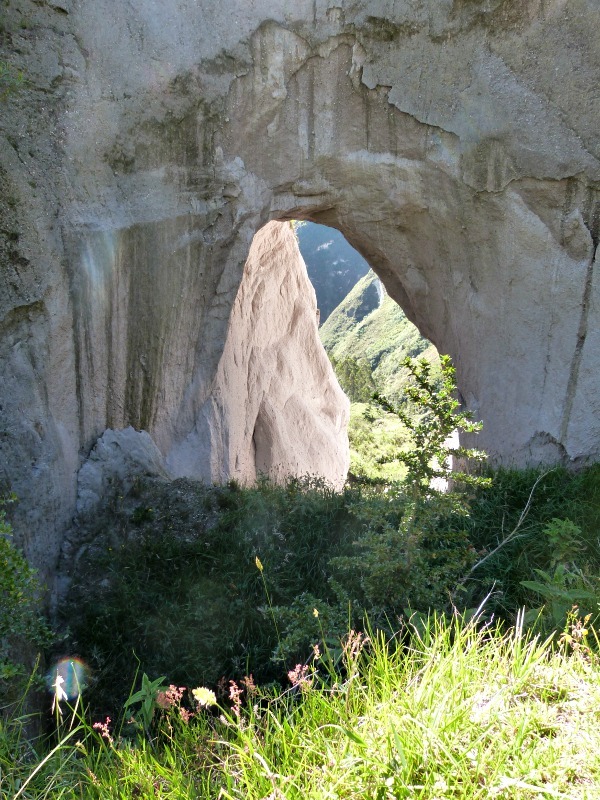 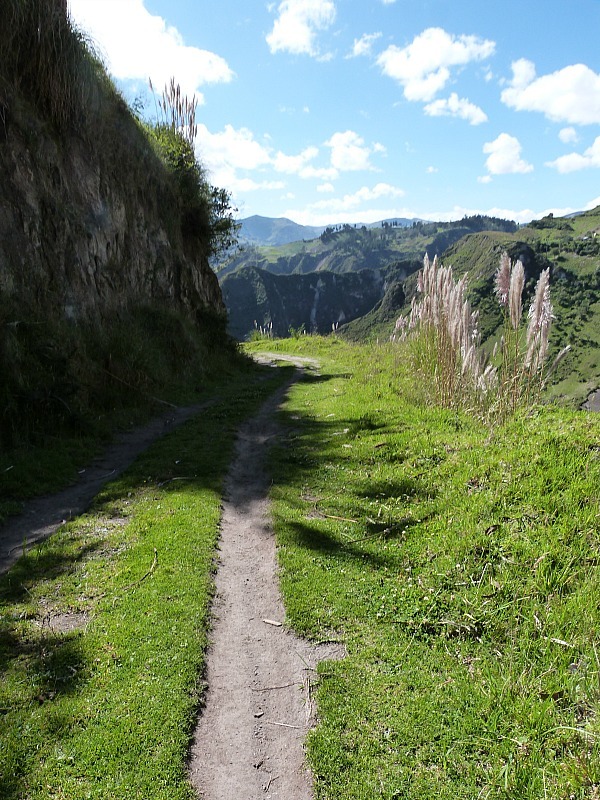 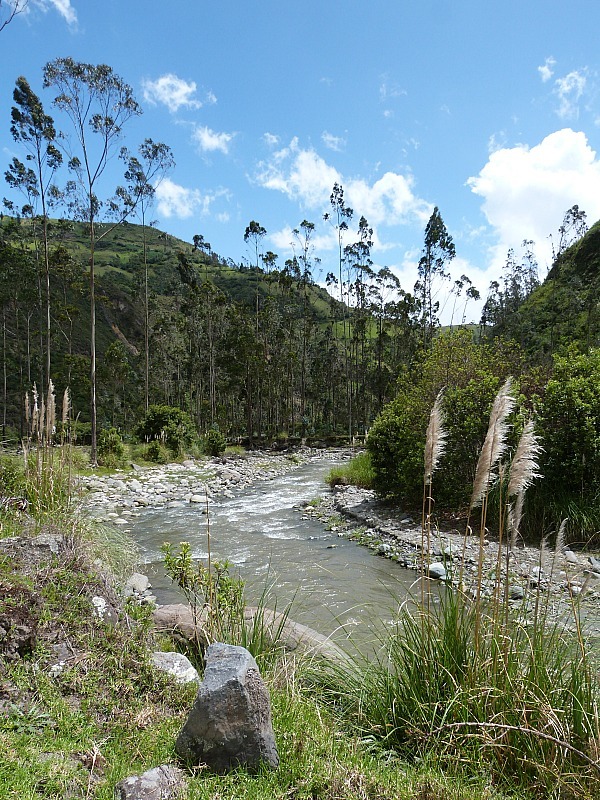 The second day was definitely the hardest with a lot of uphill at the end of the trek. Everyone was exhausted when we finally got there and starving.

Unfortunately there were no restaurants in the town (except in our hotel but it wasn’t open yet) so we all bought lots of bread, chips and chocolate from the local store and stuffed ourselves silly sitting outside on the curb.

The locals thought we were a bit of a novelty and kept staring and waving at us. We felt like celebrities. 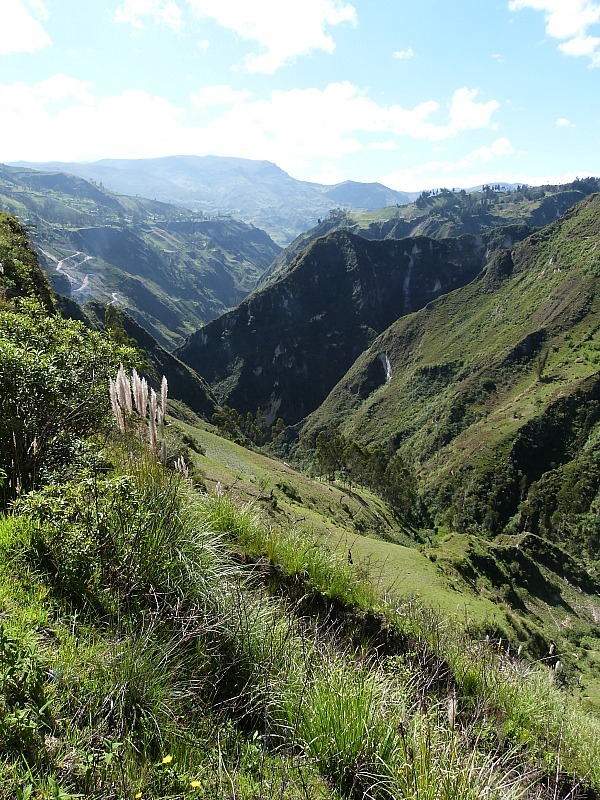 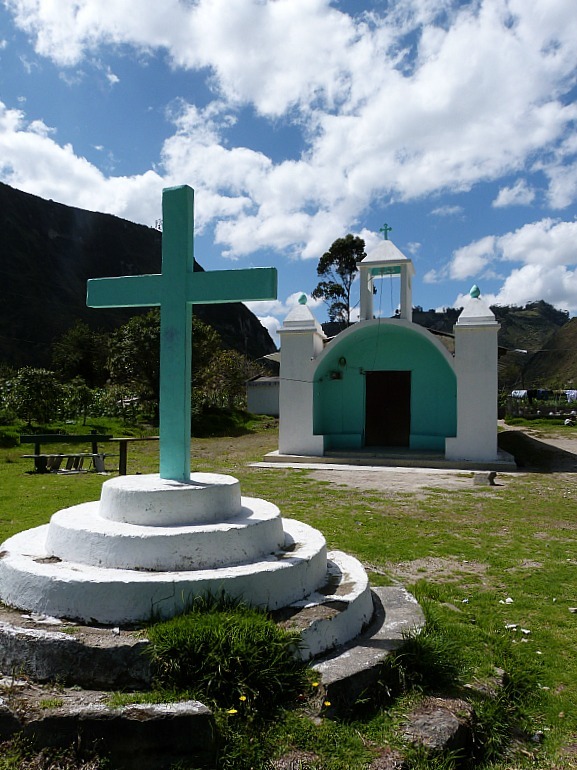 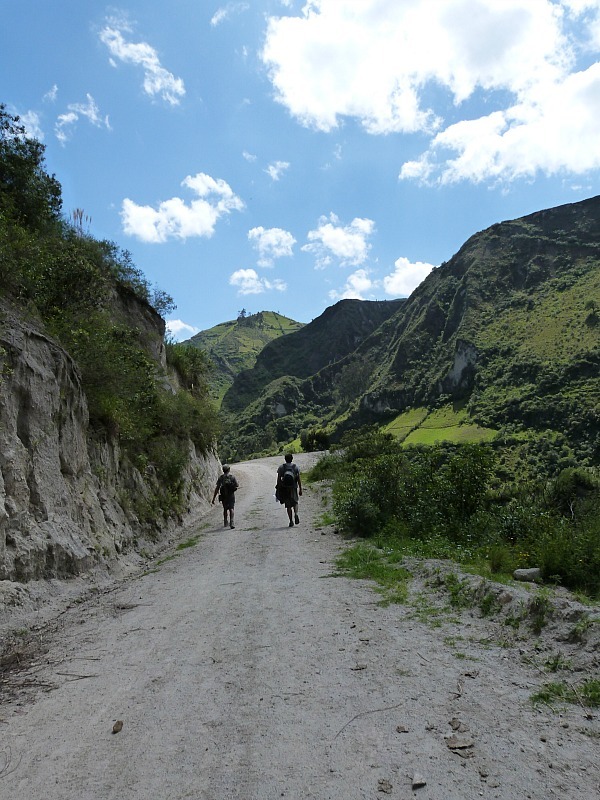 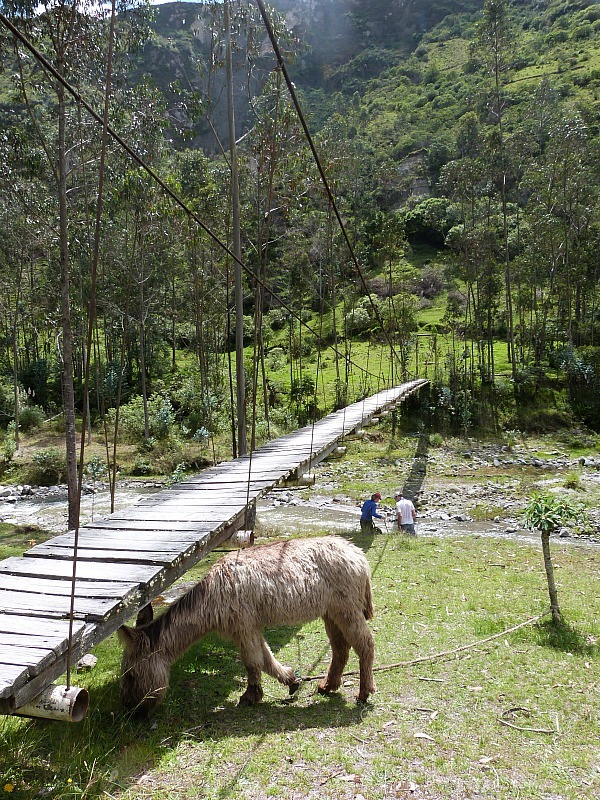 It started raining and got quite chilly after that so we all retired to the Hostel Common area, warming up with hot chocolate and an amazing lemony tea made from the leaves of a plant growing outside the hostel. 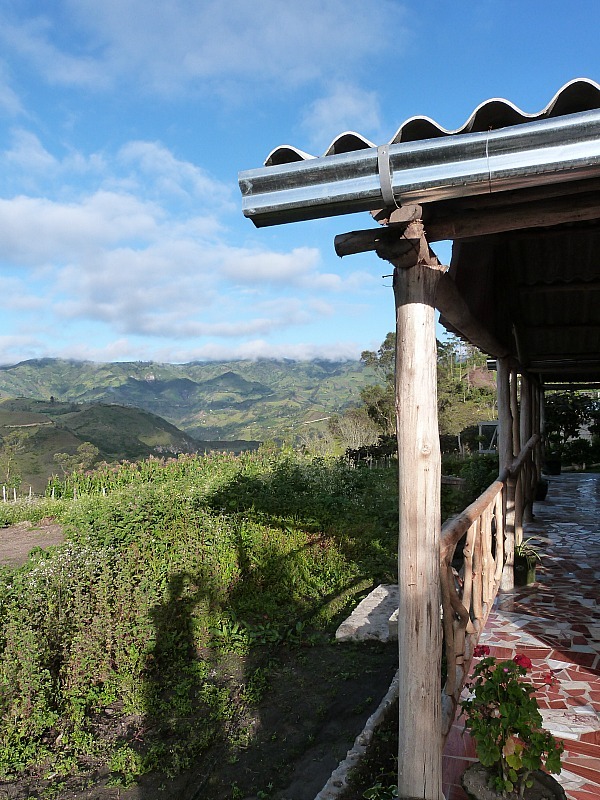 Everyone played cards and ate dinner together while everything outside was shrouded in an eerie mist. I sat by the potbelly stove to keep warm and watched the wispy fog drift around outside, revealing then hiding the mountains.

The next morning we got the Milk Truck as the only bus leaves at 4am and no one wanted to get up that early! The Milk Truck ride was a very memorable experience, we all stood on the back of the ‘Truck’ (really a Ute) along with the two big barrels for milk.

The driver stopped along the way picking up milk from local farms and pouring it into the barrels. We picked up locals along the way also and it got very full, very fast.

We rose to just under 4000m and had some beautiful mountain views while we wound around the bends. After 2 hours crammed in the back along bumpy gravel roads we were ready to get the proper bus!

Two buses and a short stop at a local market later and we were back in Latacunga. After picking up our bags we hit the road again with a couple of extra friends and headed to Banos – Ecuador’s Adventure Tourism Capital. 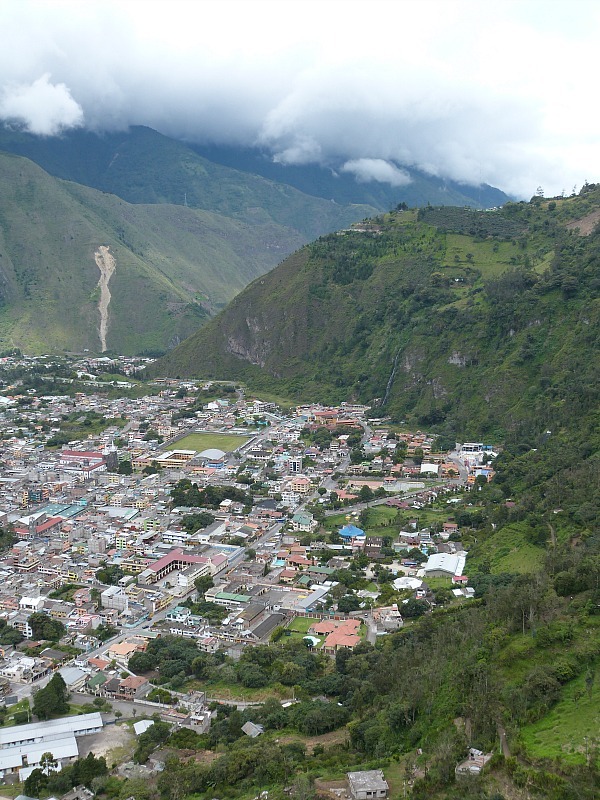 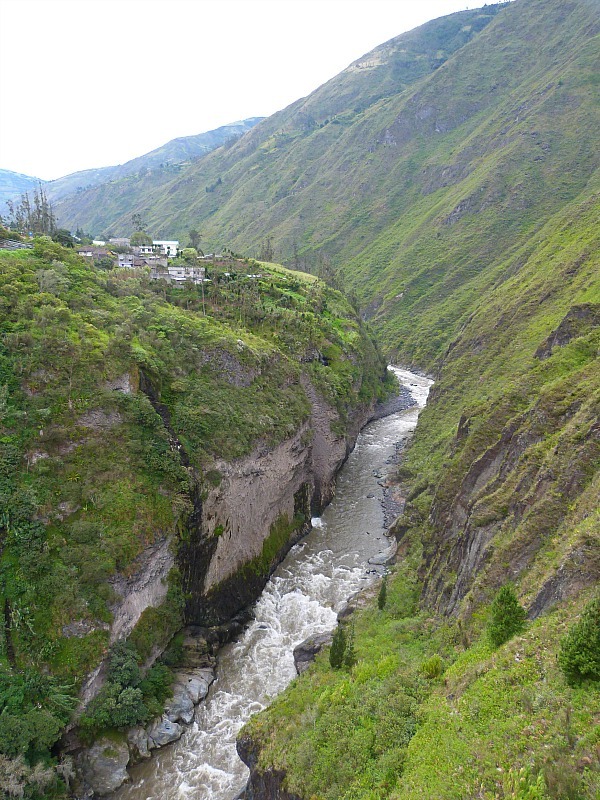 Unfortunately the weather in Banos was pretty terrible as it is low season in the mountains. It is a cool little town none the less, surrounded by peaks and waterfalls with a natural hot springs complex which we took advantage of.

There are some great international restaurants there so our three days in Banos consisted of sampling lots of delicious food, playing drinking games at the Hostel, mini hike along a ridge above town to a giant Virgin Mary statue, and lots of relaxing. 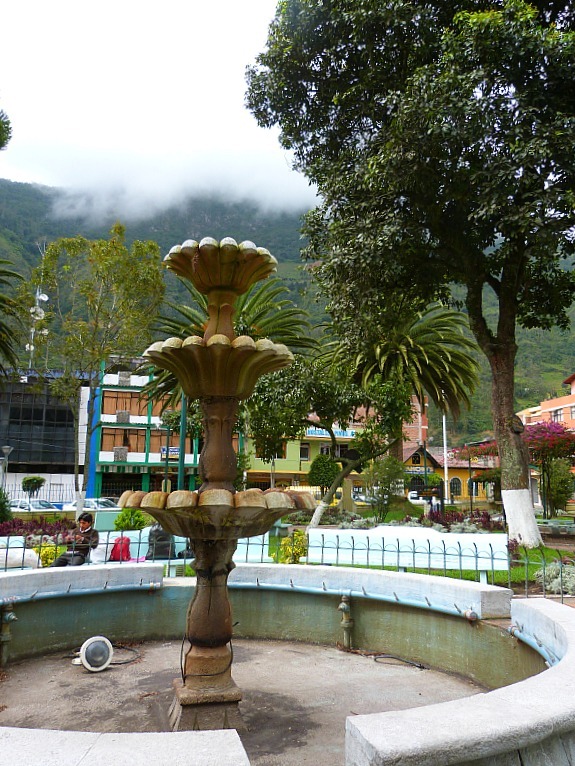 We probably should have done at least one adventure activity but I wasn’t too keen to immerse myself in cold water, canyoning or white water rafting, when the temperature outside was only pushing 15C.

We really wanted to see the active Volcano behind town but the weather didn’t clear up while we were there so it was impossible. We were going to do some downhill bike riding to a waterfall but we were all hungover that day so that didn’t happen either.

We had a great time anyway. After leaving Banos we spent a day on a bus to Cuenca, our last stop in Ecuador. 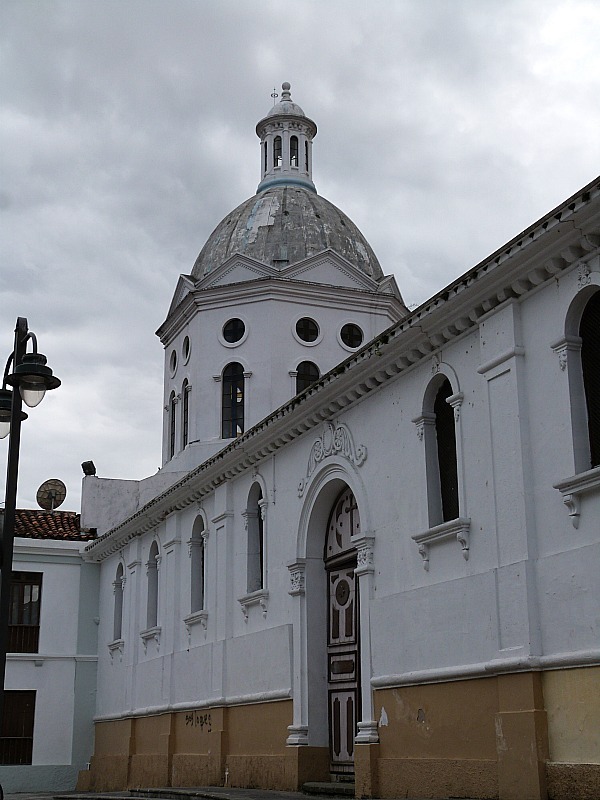 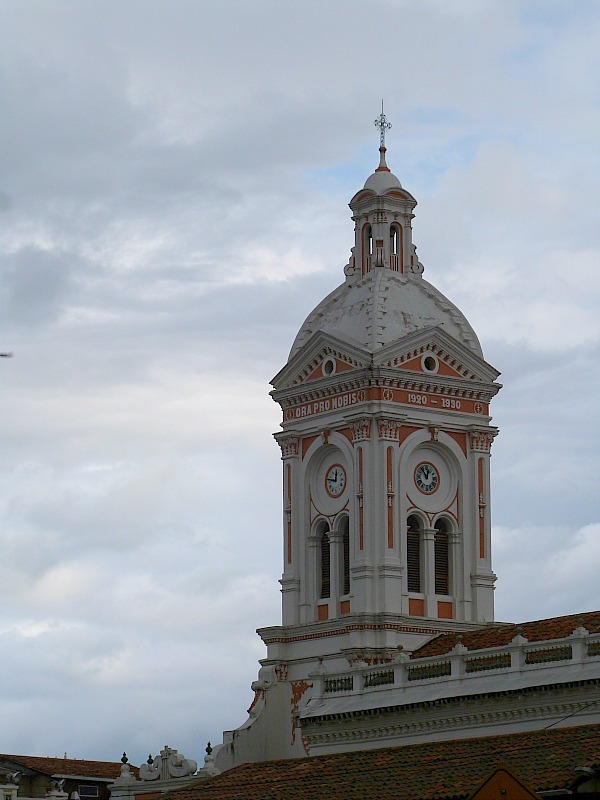 We only had an afternoon and evening to look around Cuenca which turned out to be fine as it isn’t that large. I really liked the vibe there and enjoyed strolling the streets and checking out the churches, squares, flower market and the raging river running below town.

It would be a nice place to stay awhile and just relax and recuperate. There was no time for that though, thanks to the Coffee Farmers Strike in Colombia. 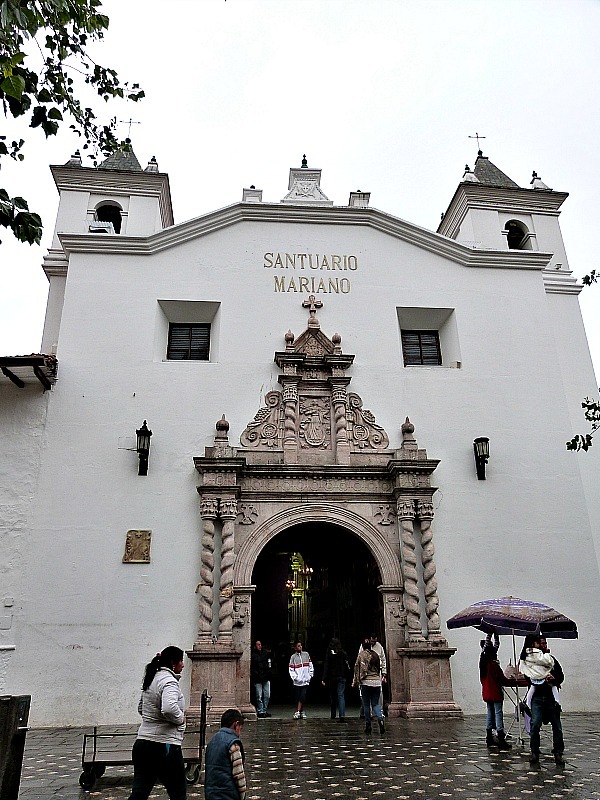 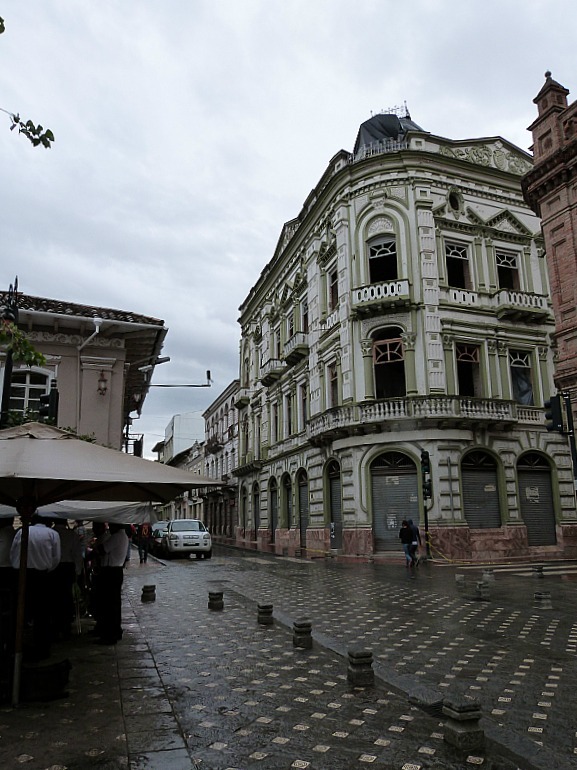 The things I liked about Ecuador the most were the cool gangster style hats the indigenous women in the small villages wore, the randomness of the Chinese Restaurants (Chifas) EVERYWHERE and the Clown/Mickey Mouse/Donald Duck rubbish bins – helping to make rubbish disposal fun.

Ecuador definitely deserves more than nine days and I will certainly be giving it more time in the future when I visit the Galapagos Islands and more of the beautiful mainland.