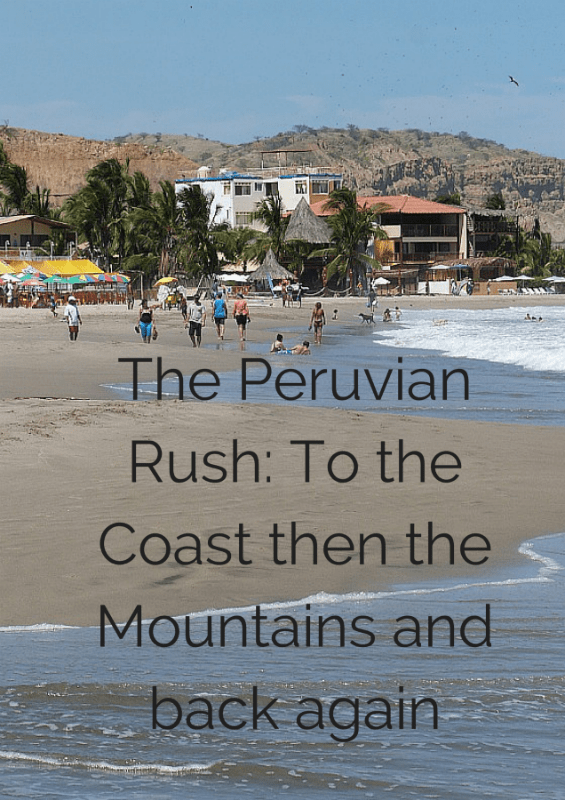 So as I mentioned in my last post, because of the damned Paro in Colombia, we were going to have to hurry to get down to Cusco on time to do the Inca Trail on the 27th March.

We were missing the beach (and the sun) as the last time we had been by the Coast was way back in early February, so we decided to visit Mancora, a popular beach resort on the Gringo Trail and just a couple of hours over the Ecuadorian Border, with one of the best beaches in Peru.

Mancora consists of a dusty main street filled with surf shops and Restaurants catering to the many Peruvian and International tourists, and another small street fronting the surprisingly nice beach.

We arrived in the early evening and checked into Loki Hostel which I had read about in Lonely Planet. It was beautiful and so luxurious.

Greek style white washed buildings, a gorgeous pool and poolside bar and restaurant made it feel more like a Hotel than a Hostel and it was just what we needed after 3 weeks in the cold and grey. 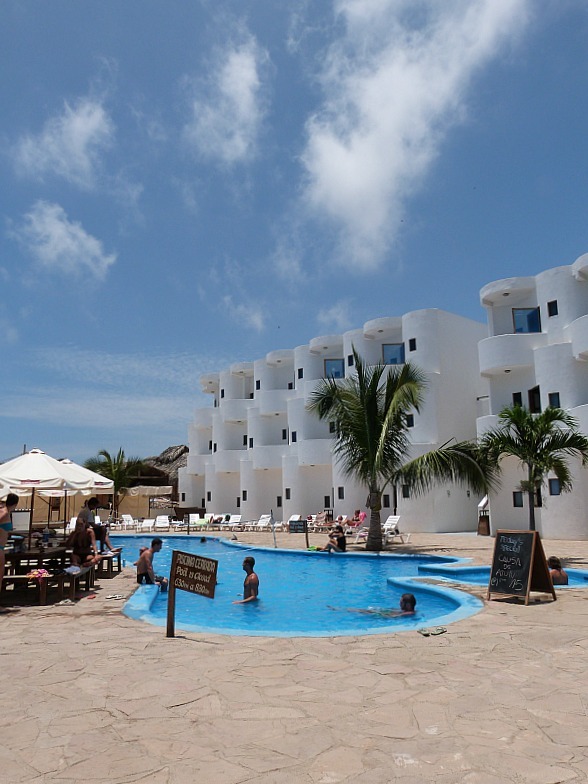 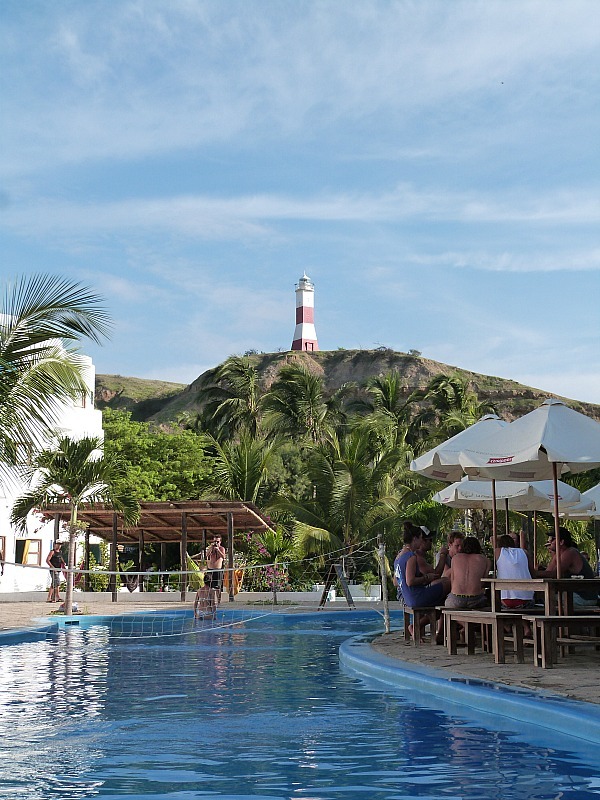 We spent two nights in Mancora checking out the shops, sunbathing (read: burning), swimming and walking along the beach. The boys rented long boards and my brother Robbie managed to snap his in half within 10 minutes.

Feeling crispy but relaxed, we got the night bus to Chimbote and connected there for a bus into the Cordillera Blanca Mountains in Central Peru, the second highest Mountain Range in the World after the Himalayas and some say the most beautiful. 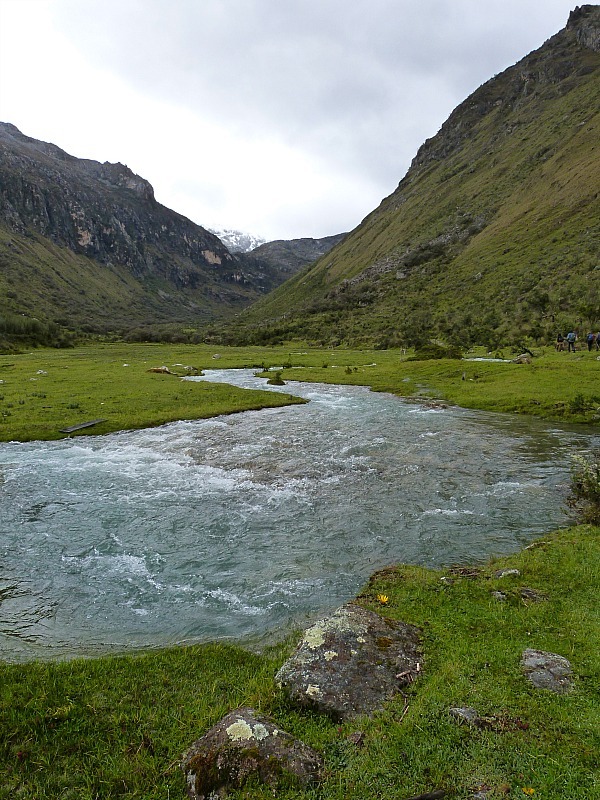 Our base in the Cordillera Blanca was Huaraz, a popular base for hikes into the surrounding mountains. Huaraz sits at 3090 metres above sea level and I definitely felt a lethargy and shortness of breath the closer we got to our destination.

Unfortunately it is the rainy season at the moment and we were greeted by grey clouds, drizzle and the coldest weather since our time in San Cristobal de las Casas way back in November.

I had expected Huaraz to be a lovely little mountain town but it certainly isn’t that. What we found instead was a chaotic, unattractive and dirty city.

Trav was not feeling well, a mixture of the altitude and eating something dodgy in Mancora, so me and Rob went exploring around town and to the pungent smelling local market.

We saw a lot of mesh sacks full of guinea pigs cowering together on the side of the road, being sold for dinner. I was tempted to buy them all and set them free but I don’t know how long they would survive in the harsh environment of the Cordillera Blanca.

We arranged through our hostel to do the most popular day trek in the area to a beautiful lake known as Laguna 69.

It was going to be an early start with a 6am pick up, and a long day including a total of 6 hours of driving, there and back, and 6 hours of hiking up to 4600m above sea level. 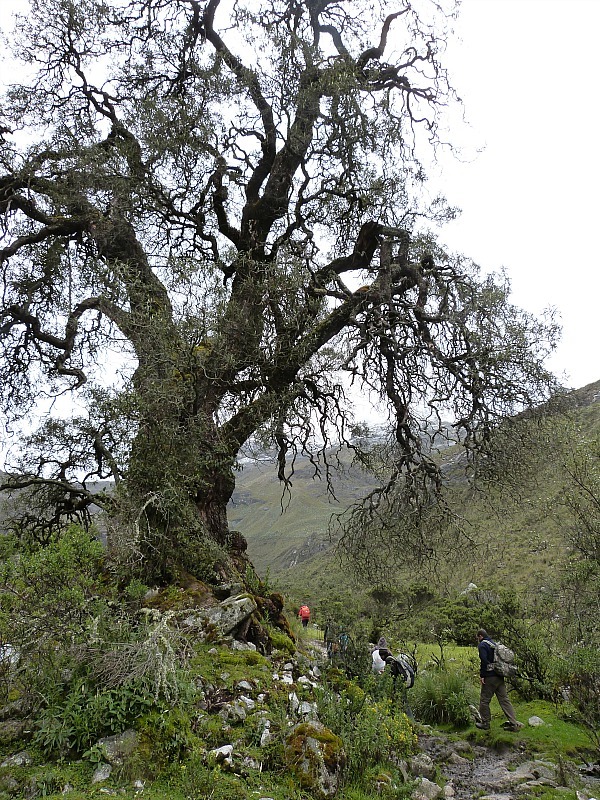 I was nervous and got even more nervous when the morning of the hike, Rob pulled out when he came down with the same food poisoning that Trav had, as well as a sore back. I decided to go anyway as it was with a tour so I wouldn’t be by myself. 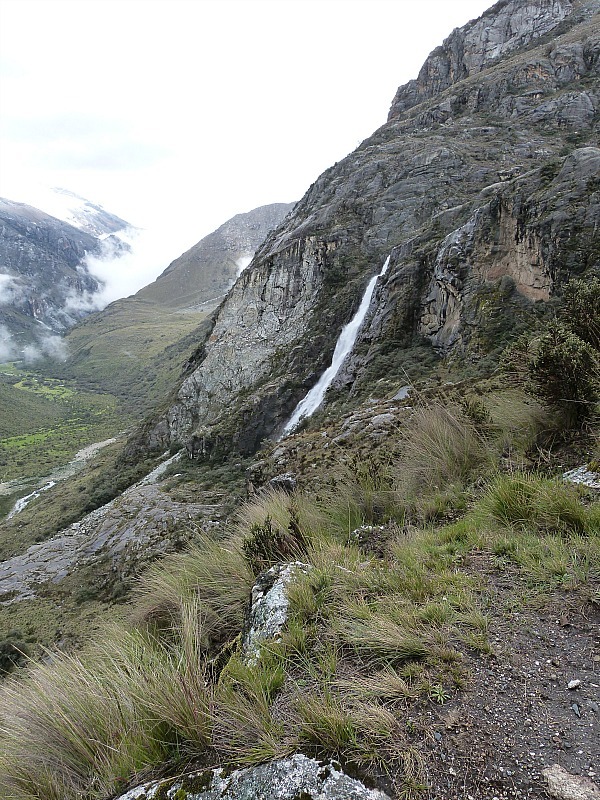 The hike was definitely tough but it turned out to be probably the best day hike I have ever done in my life. The scenery was gobsmacking, despite the cloud cover; a valley framed by giant mountains, cascading waterfalls and glaciers. 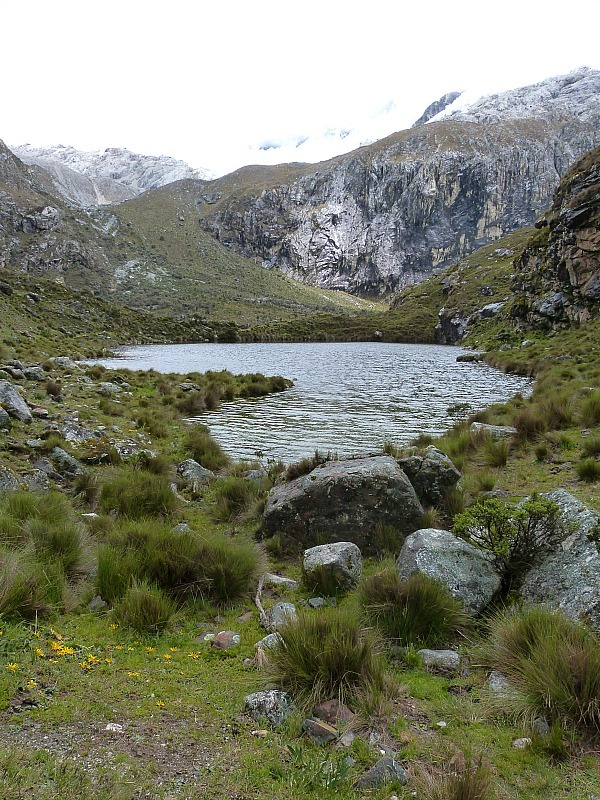 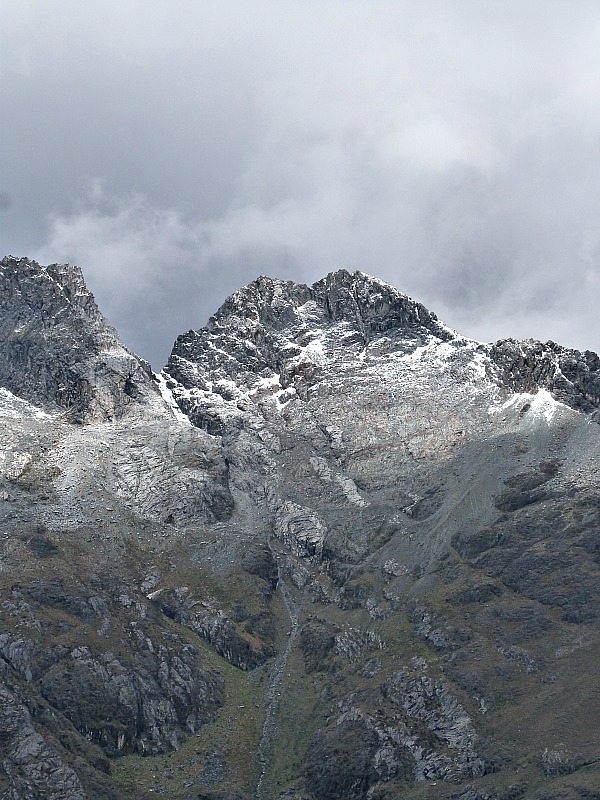 Wild purple and yellow flowers sprouting everywhere and no one else on the trail, other than our group of 15. I hiked by myself most of the way which is how I prefer it, that way I can take in the scenery better with no distractions. 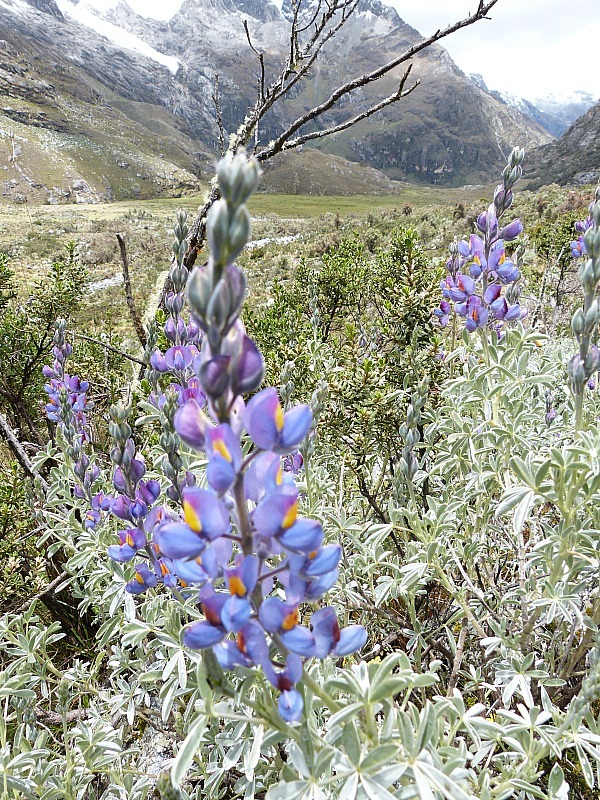 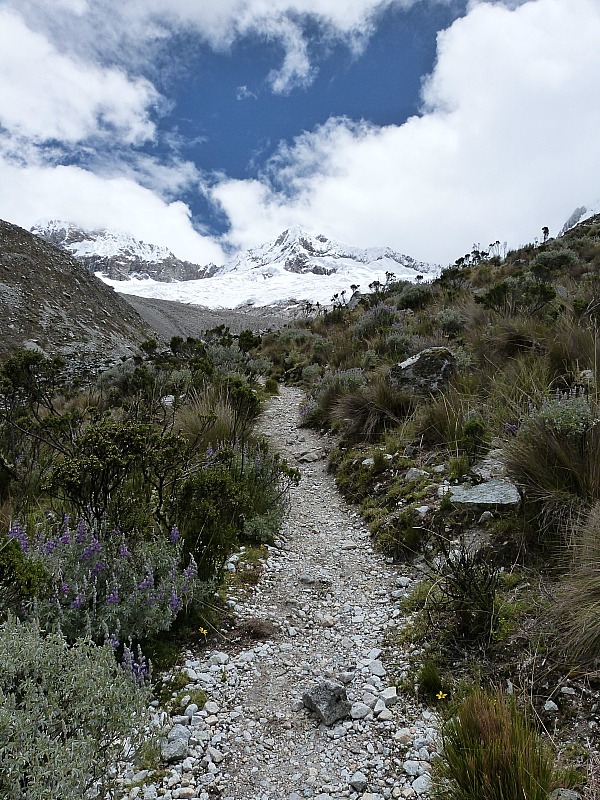 I had a massive smile on my face the whole time.

The last hour of the hike was steep switchbacks that lead up to the lake. The altitude really got to me there and my heart was pounding.

Thankfully I didn’t have any of the other symptoms such as nausea or fainting and when I got my first glimpse of the perfect blue lake, it was all worth it. 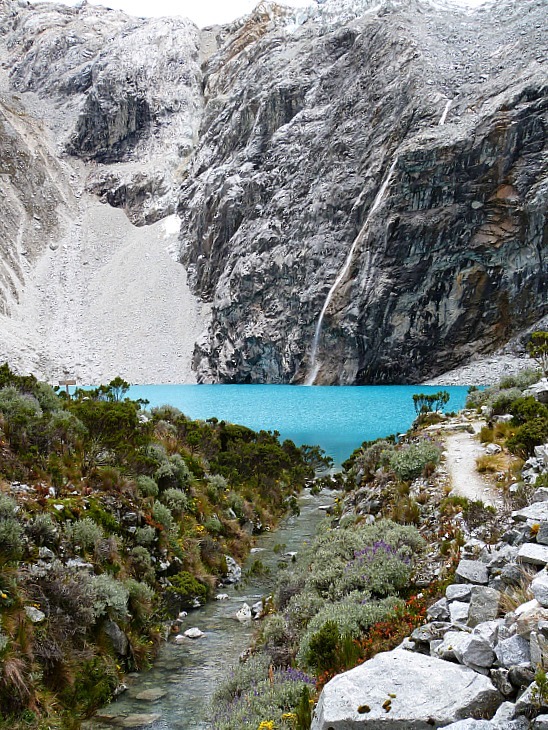 The sun even came out for a couple of hours while we were up there. We all had lunch at the lake then hiked back down together.  It got cold and wet but we warmed up in the van on the way back to Huaraz.

The boys were both feeling a lot better after resting all day so we decided to get out of miserable, guinea pig hating Huaraz and head to the hot sand dunes of Huacachina, an oasis lake 5 hours South of Lima.

After a delicious wood fired oven pizza for dinner (the one thing Huaraz had going for it in my opinion!) we caught a night bus to Lima, a connecting bus to Ica, and a short taxi ride to Huacachina. 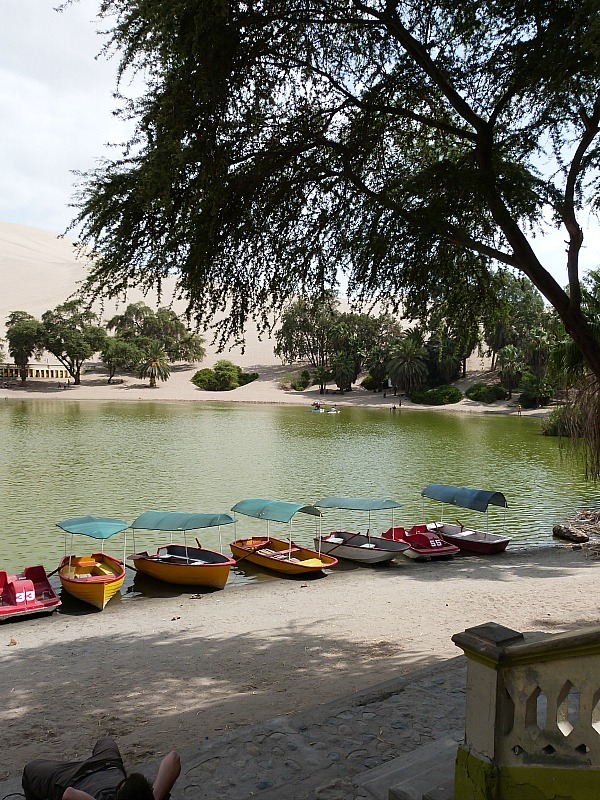 We felt exhausted from our long bus journeys and the heat but we managed to take a look around Huacachina. Luckily it is only a tiny tourist town so it took about 10 minutes. It is very touristy but I can’t think of anywhere else I have been in the world like it.

A small, tree shrouded lake surrounded by a basic sandy beach on one side and a handful of Souvenir shops, restaurants and hotels on the other. It is completely surrounded by massive sand dunes and looks like it would be less conspicuous in the Middle East rather than Peru. 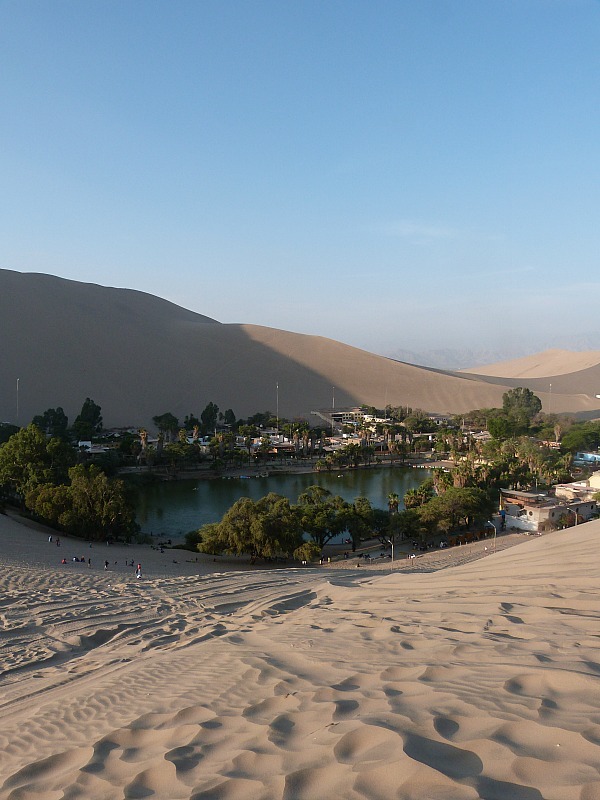 We had lunch and rested for a while before our 4pm Dune Buggy and Sand boarding trip. I had been on a Dune Buggy before with my Dad on the Oregon Sand dunes and had a blast.

This time is was quite different.

The dunes behind Huacachina are a lot larger and steeper and the dune buggy trip very closely resembled a roller coaster ride at times and was quite scary! The boys were absolutely loving it. I was going back and forth between exhilaration and extreme terror. 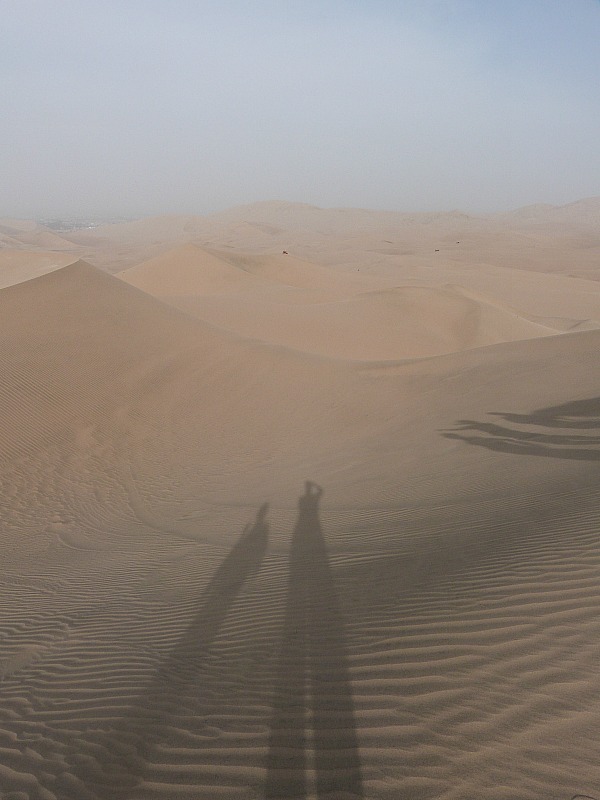 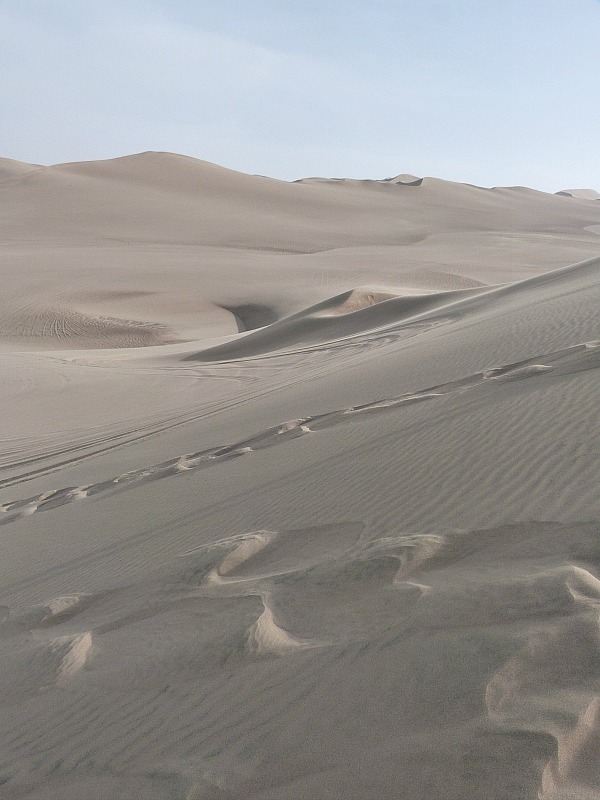 We stopped along the way to try our hand at sand boarding. The dunes were very steep but I managed to do 3 out of 6 rides on my stomach with my feet stuck fast in the sand behind me to slow me down. The last 3 I ran down instead.

It really was beautiful out there and when I wasn’t almost crapping my pants with fear, I enjoyed the peacefulness of the endless golden dunes and I really enjoyed watching the sun set over them. 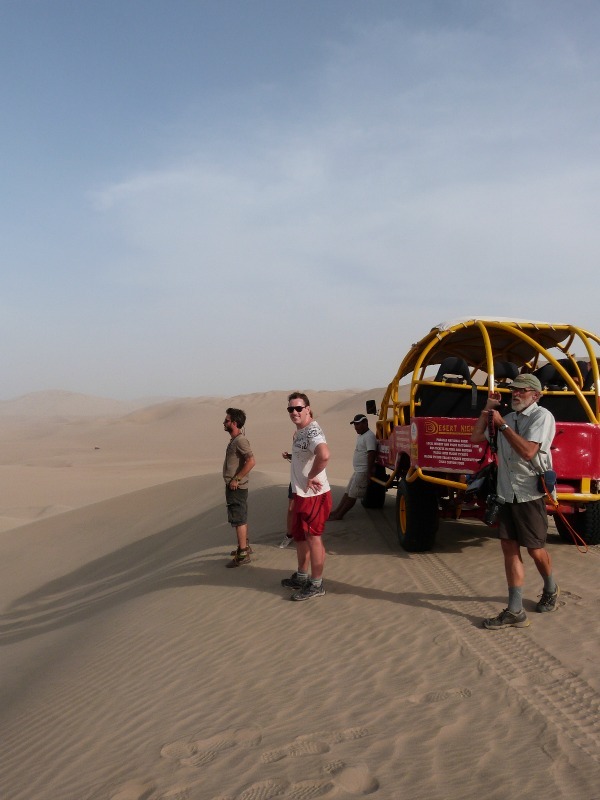 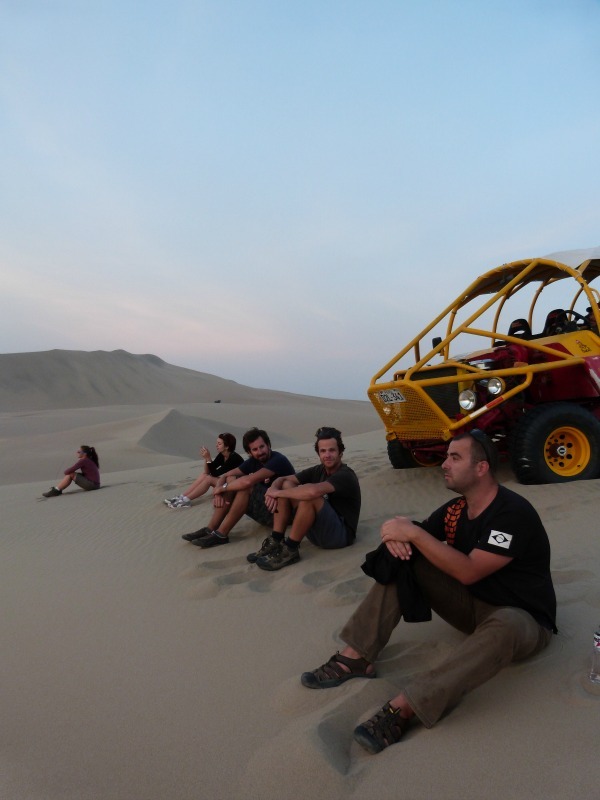 The day where we had to settle up the balance for the Inca Trail in Cusco was almost upon us, so after spending the next day staying out of the heat and relaxing at the hostel, we took an 18 hour night bus from Ica to Cusco on the most comfortable bus we could find.

We had giant reclining leather arm chairs to sleep in, a blanket and pillow, dinner and breakfast service and our own private movie screens. Fanciest bus I have ever been on but by the time we got to Cusco 18 hours later we were all feeling pretty rough.

So after a hectic week we managed to make it on time to Cusco, the City of the Incas.

Don’t miss the next instalment which includes really bad weather, food poisoning and the amazingness that is Machu Picchu.