Alaska, Hikes & Walks
This post may contain affiliate links. If you make a purchase through an affiliate link, I will earn a commission at no extra cost to you. Thanks for your support. 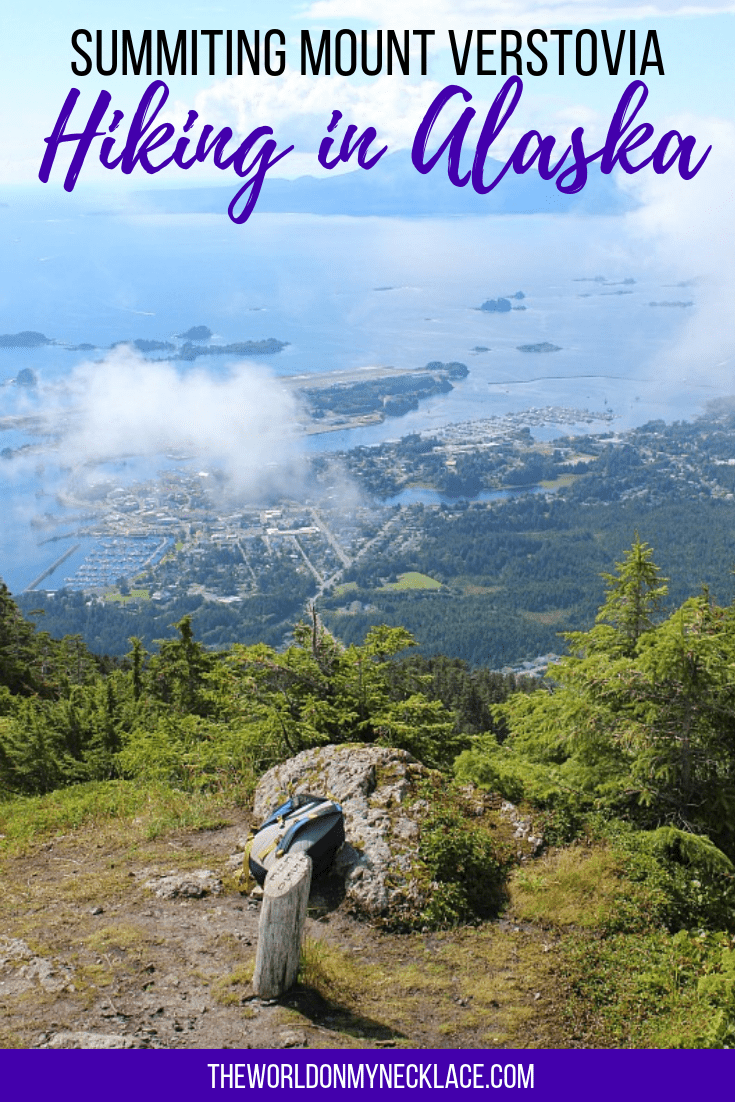 I should have known better. When it comes to hiking in Alaska, what is rated as easy to an Alaskan can be the most gruelling endurance test to anyone else. They build ‘em tough up there.

The hike up Sitka’s Mount Verstovia – one of the most popular Sitka hiking trails – wasn’t the most challenging hike I have ever done but I certainly wouldn’t describe it as easy.

It was my new friends Michael and Russell’s idea to hike the mountain and my room mate Sarah and I decided to tag along. I love hiking alone but I love it even more having like-minded people to share the experience with. This was going to be a great day.

As the bus doesn’t run on Sundays, we had to tack on the extra two mile hike along the coast then the highway to the beginning of the Mount Verstovia trail, not that I was complaining.

It was a scenic walk firstly through the forested Totem Park and then along the rugged coastline and past a couple of small islands. Some of the islands were connected to the mainland by causeways and had houses on them. Oh, what I wouldn’t do to live on my own little private island. 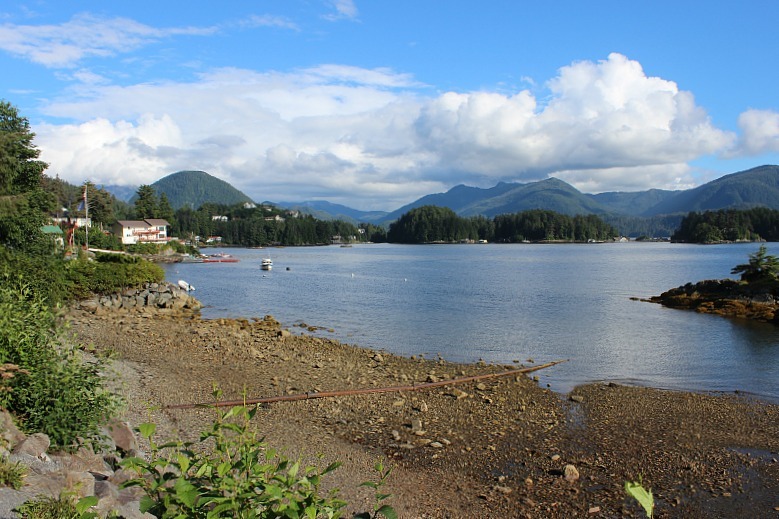 After about 45 minutes we reached the beginning of the trail and realised pretty quickly that maybe it wouldn’t be as easy as we had been led to believe. It was steep. Really steep.

Beginning the Hike up Mount Verstovia

As I have mentioned previously, it rains a lot of the time in South East Alaska and although we were lucky with the weather in Sitka, we quickly realised that the trail hadn’t dried from the previous rains. Par for the course when hiking in Alaska.

It was slippery and dark for the first mile or so with only short glimpses of the spectacular views that were to come. We scrambled over exposed roots and through muddy puddles while climbing the steep and rugged log stairs leading us up Mount Verstovia. 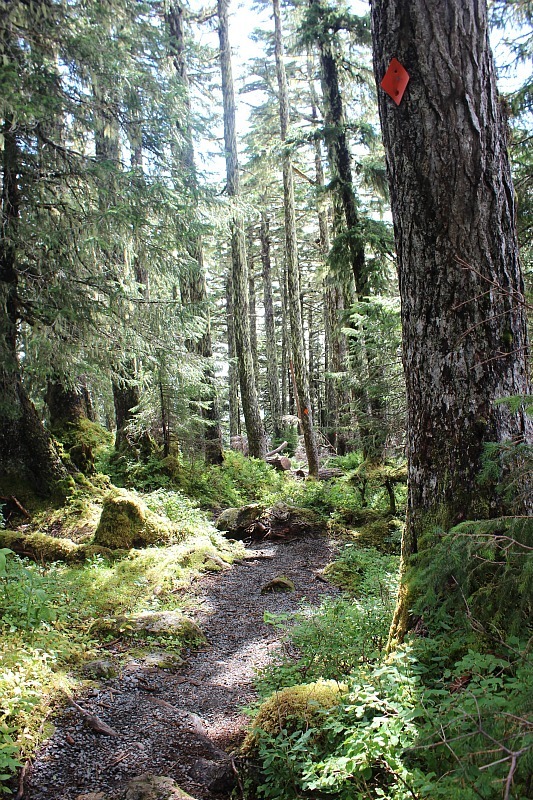 A thick layer of moss coated everything on the forest floor. Rotting branches that had probably been ripped from trees during a storm were now sprouting new life, in the form of toadstools and ferns. 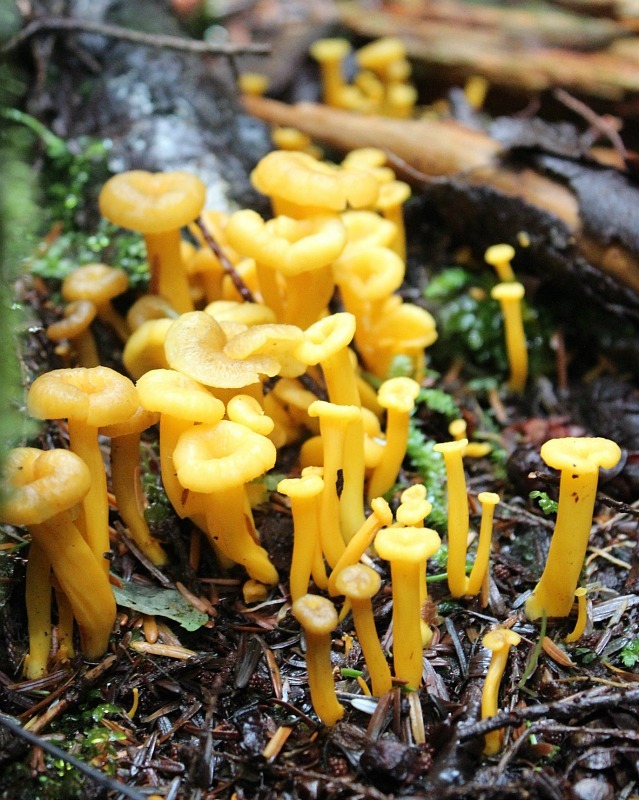 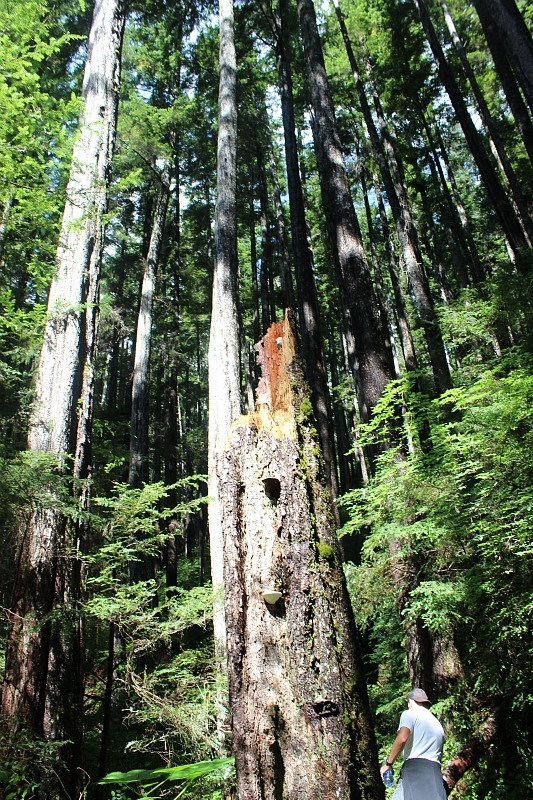 We stopped at a small clearing for a break then pushed on till we got to our first viewpoint. I realised that we were a lot higher up than I thought we were and the views over the forested mountain slopes and the coastline below were already impressive. 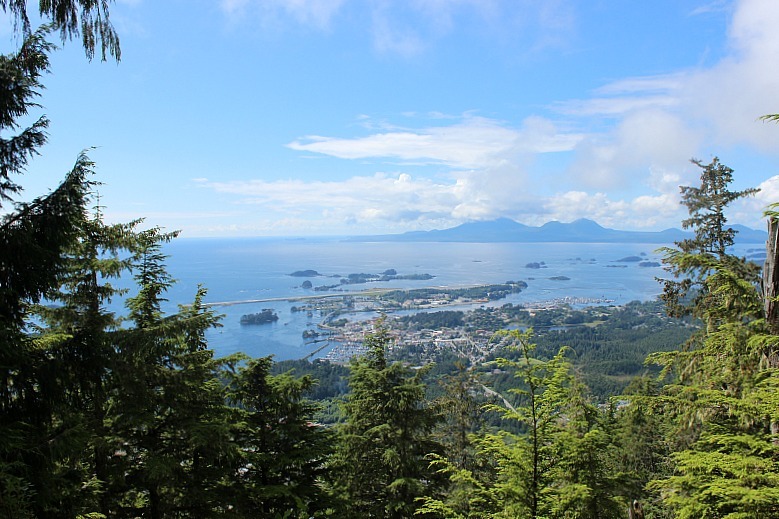 After a further uphill slog the trail finally started to flatten out a bit in the last forested stretch. Now that we were out of the deep forest, the world around us was becoming light once again.

An ethereal mist enveloped the forest and the sun shone through it, illuminating the trees around us. I almost expected to see some fairies dancing in the mystical light. 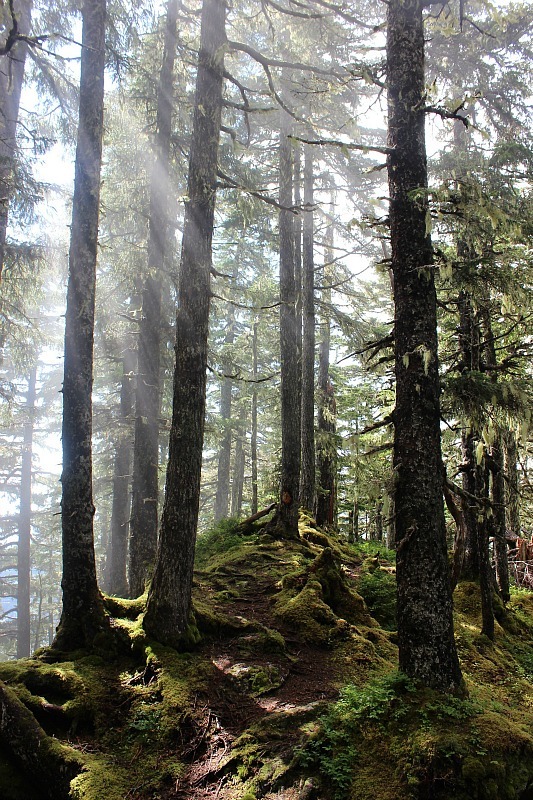 Emerging out of the enchanted forest, the last section of the Mount Verstovia trail was through burgeoning sub-alpine meadows of wild blueberries and vivid wild flowers. 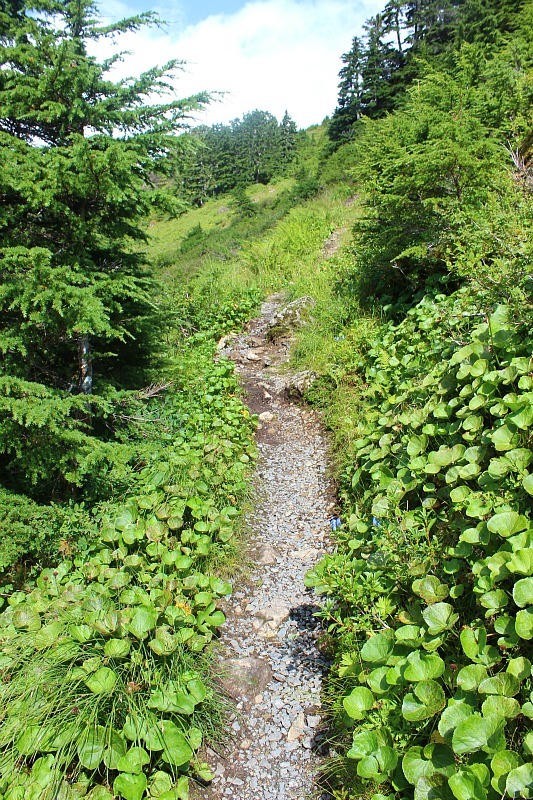 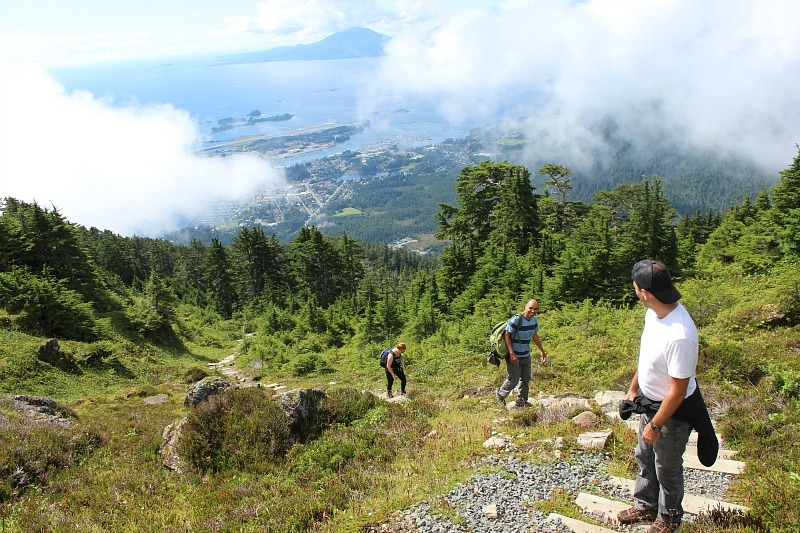 Reaching the Summit of Mount Verstovia

And then we were at our destination, the shoulder of Mount Verstovia. Suddenly the world below us came into view in a spectacular way. It made the hard slog all worth it.

Hiking in Alaska sure ruins you for pretty much everywhere else.

Misty clouds swirled around us in a slow and lazy arc, revealing then hiding the landscape far below us. We sat for an hour taking it all in. A deep blue fjord surrounded by dense Alaskan bush.

The sparkling waters of Sitka Sound with its many islets. The tidy city centre perched at the water’s edge. The jagged summit of the impenetrable looking Mount Arrowhead, directly across from us. 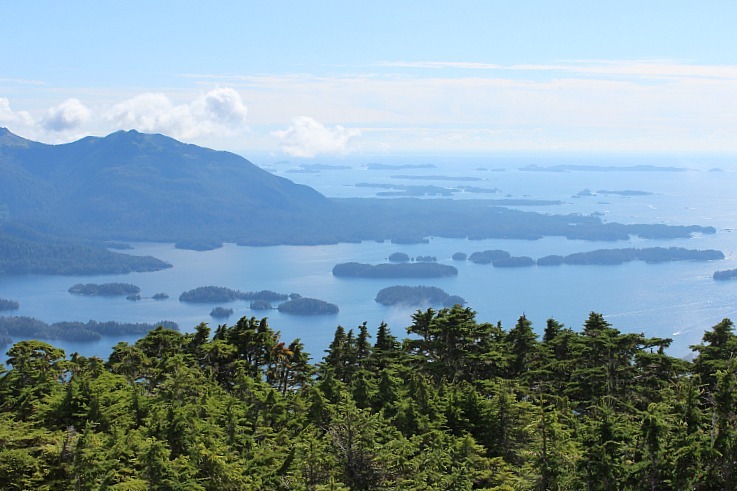 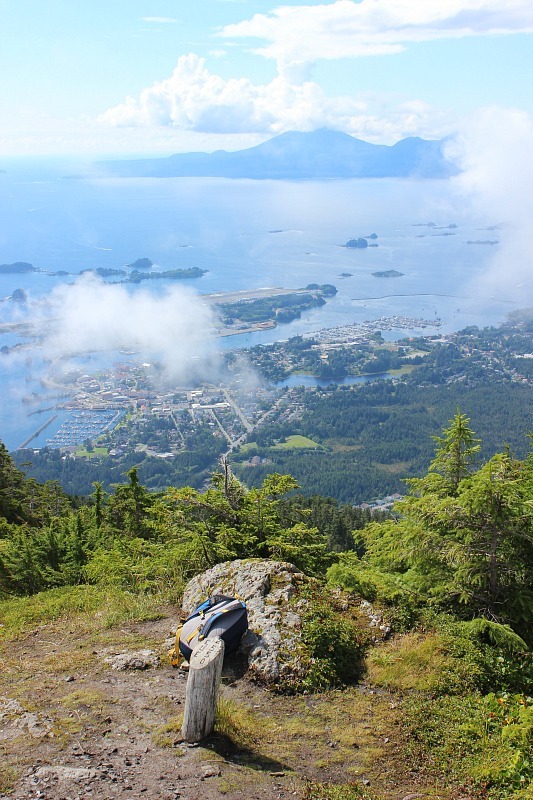 Bald eagles circled, soaring on the thermals, scanning for prey.

A few people continued on to the summit of Mount Arrowhead which is connected to Mount Verstovia by a ridge. We watched them from afar, like little ants as they edged further towards the perilous summit, content where we were.

It already felt like we were on the top of the world. 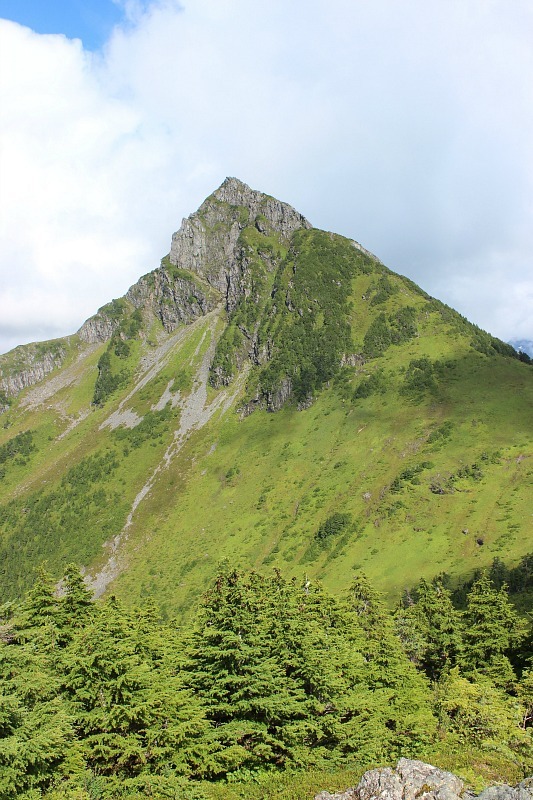 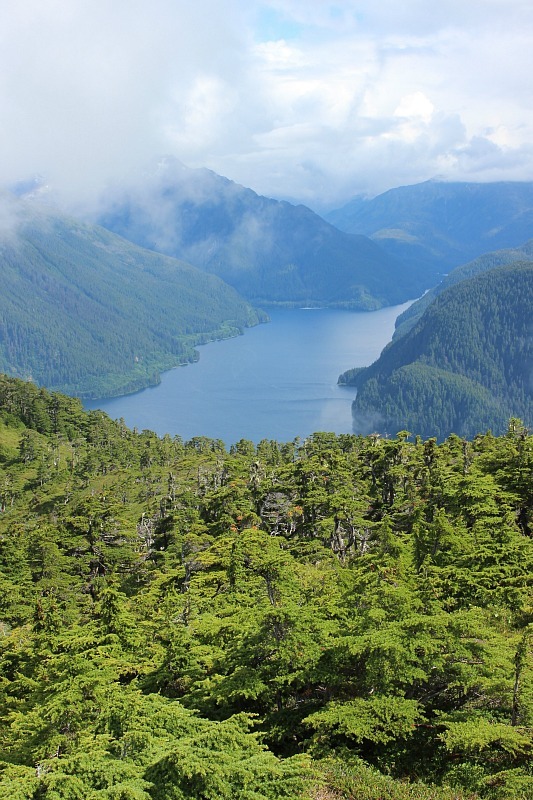 How to Hike Mount Verstovia

Getting to Mount Verstovia Trail

Located two miles east of Sitka on Sawmill Creek Road, you can either reach the Mount Verstovia trail by walking or there is a small car park at trailhead.

You can also catch the blue line local bus which runs approximately every hour and is $2 one way. The bus only runs from Monday to Friday.

It may be short but the steep incline and slippery conditions make the Mount Verstovia hike quite difficult. I would rate it Intermediate/Difficult if you aren’t an avid hiker.

The hike back down was harder in some ways as every step had to be taken with extreme caution as it was so easy to slip in the mud or on a soggy root. I went over once, hard on my side, and had a number of near misses.

5 miles/8 km return to the shoulder and back. Add an extra 4 miles/6.5 km if you are walking to and from town as well. If you really want a challenge then you can also tackle the summit of Mount Arrowhead.

Have you done any hiking in Alaska? Would you hike Mount Verstovia? 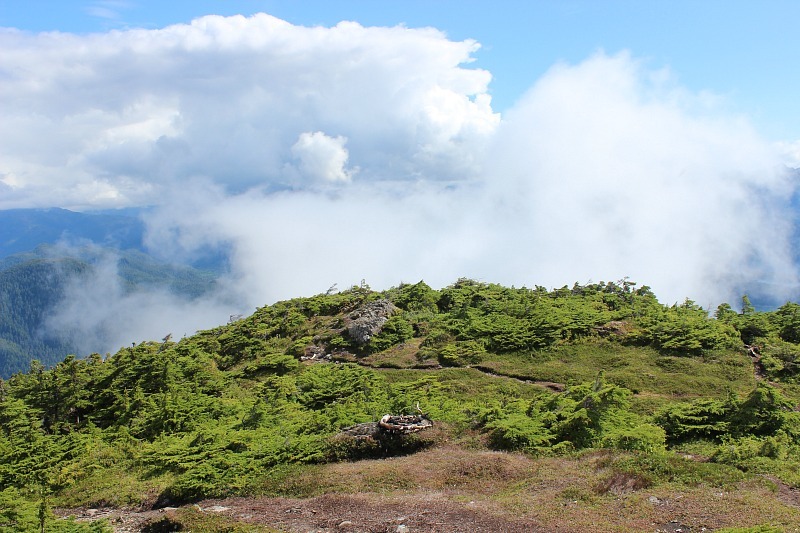 4 Comments on Hiking in Alaska: Scrambling to the Summit of Sitka’s Mount Verstovia