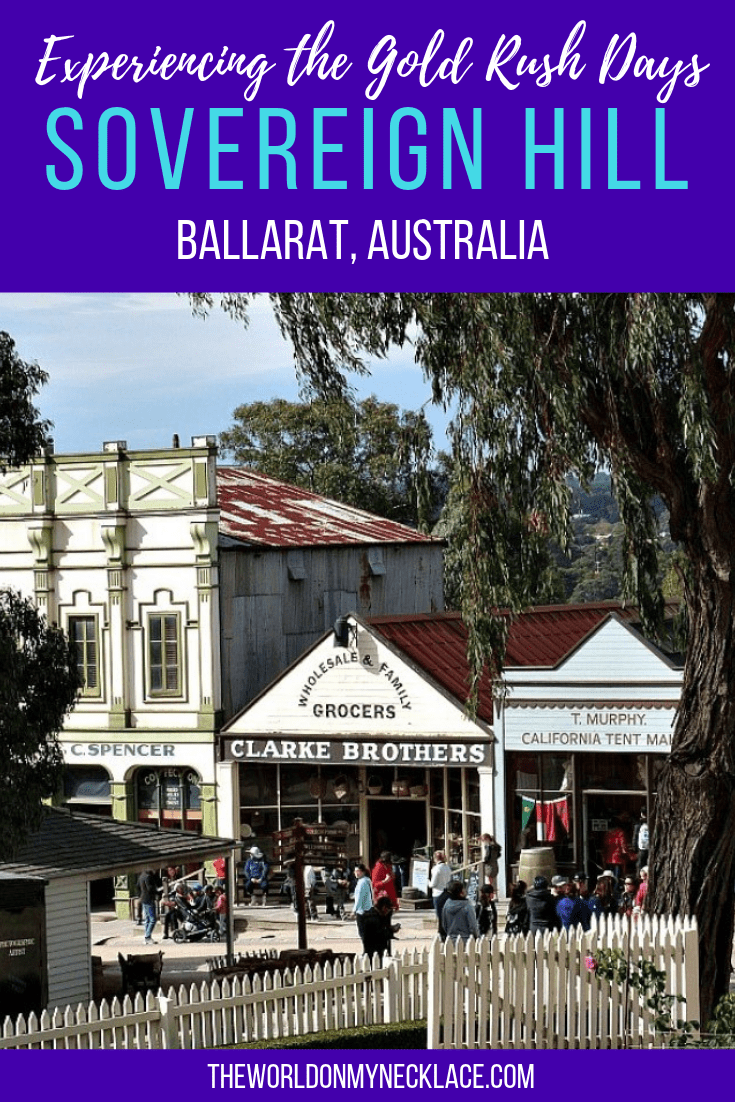 Back in Easter this year we headed to the Grampians National Park for a hiking and camping getaway with friends from Melbourne.

After a big night on the tiles in some of Melbourne’s trendy bars, we were feeling a tad (VERY) rough when we loaded up the car and set off on the 3 ½ hour drive to get to the Grampians.

We decided to stop for a breather in the small city of Ballarat. We didn’t expect much from Ballarat but we were pleasantly surprised at how pretty it is with its restored historic buildings along the Main Street and wide grassy areas running down the middle of the road punctuated with majestic memorial statues. 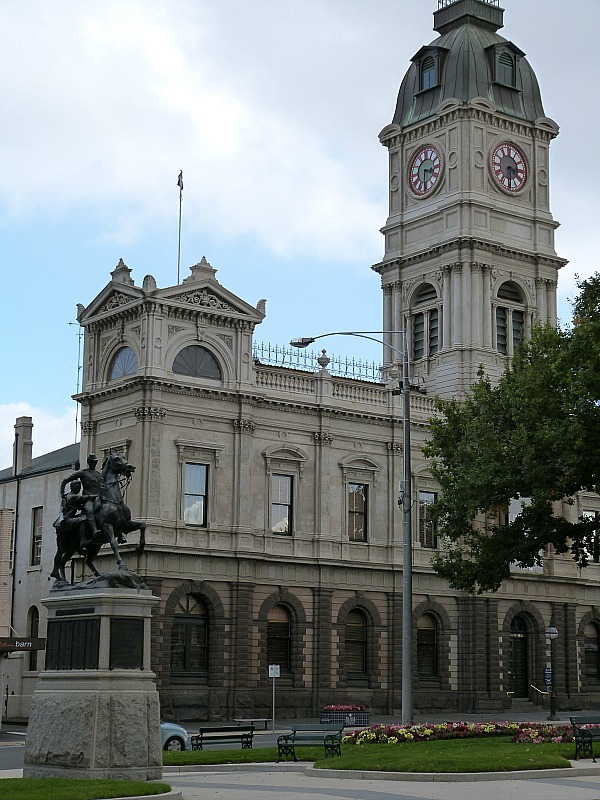 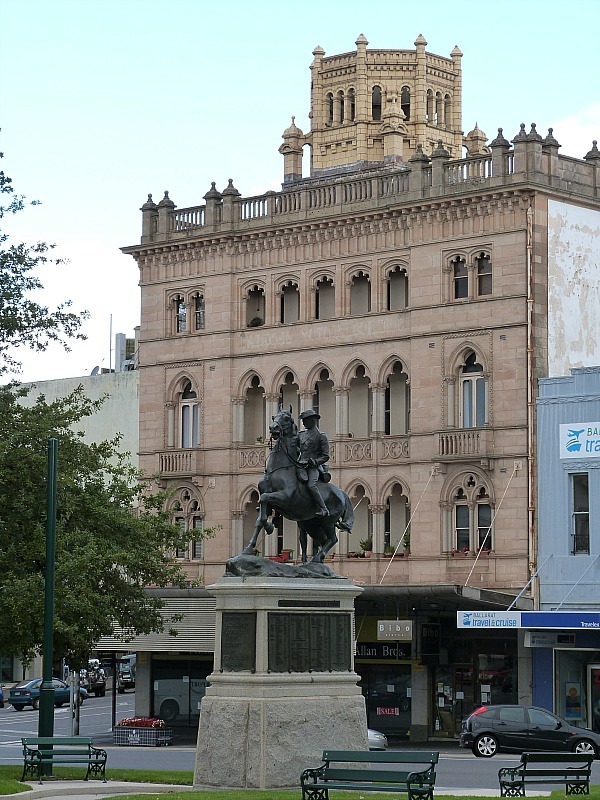 We found a pub to have lunch at and were surprised again at how amazing the food was (my risotto was to die for, TO DIE). 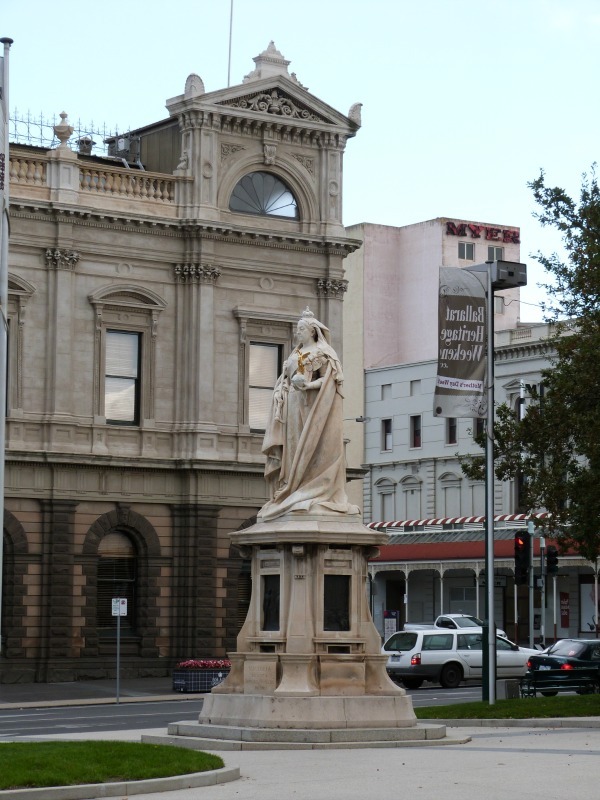 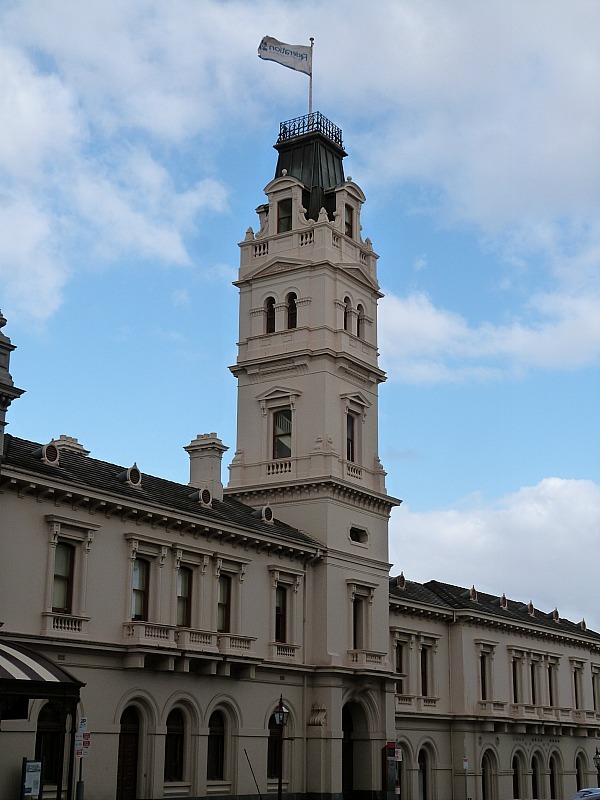 Who knew that Ballarat was such a cool little city? Hopefully next time we will have more time there, as there seems to be a lot of things to do in Ballarat. 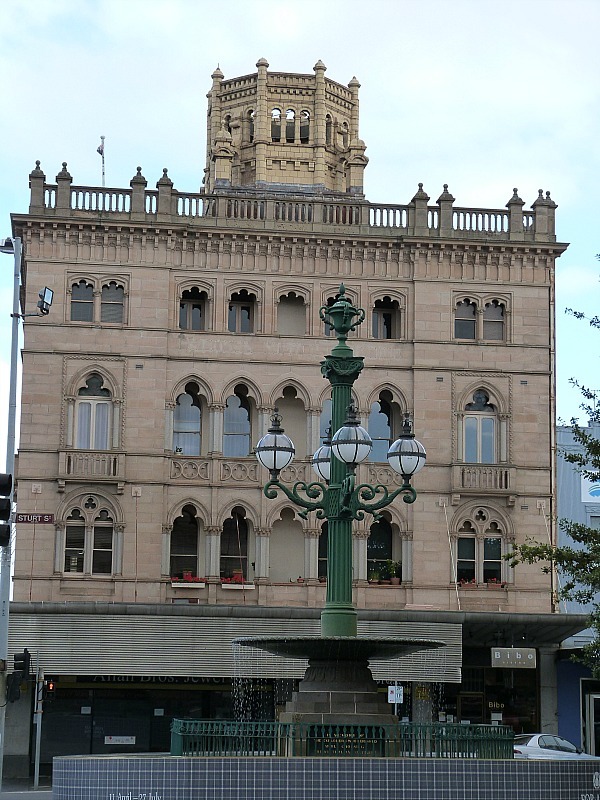 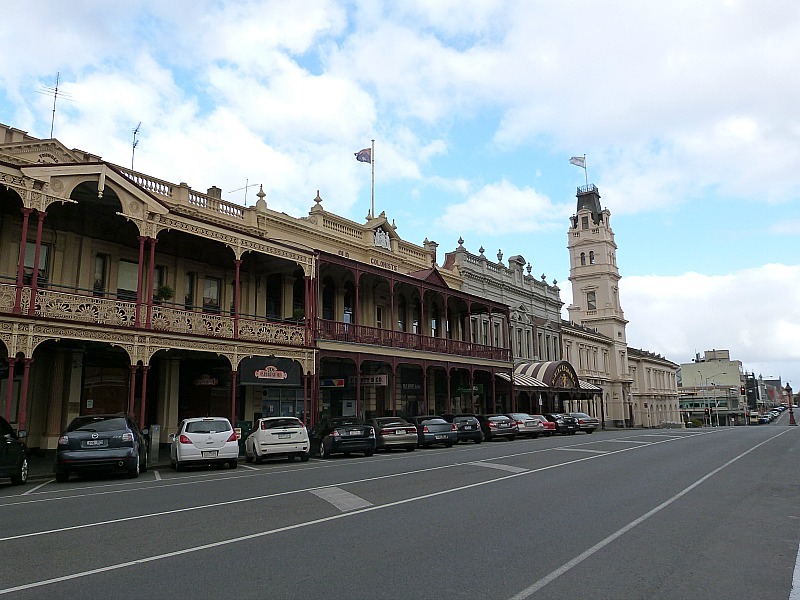 Our waitress was super friendly and chatted to us while taking our order. She asked if we were going to Sovereign Hill during our time in Ballarat. None of us had heard of it.

Turns out it is one of the biggest tourist attractions in Victoria.

A recreated Victorian Gold Rush town, Sovereign Hill is exceedingly popular and from what our waitress was saying, it sounded pretty awesome.

I love discovering the history of the places that I travel to and I have a special interest in Nineteenth Century Gold Rush history. One of my own ancestors came out from England to New Zealand during the Otago Gold rush in the 1860s; maybe that is why I am so fascinated by this period in time.

So it was decided. We would leave the Grampians early on our last day to spend a few hours at Sovereign Hill on the way back to Melbourne.

During the Victorian Gold Rush, which ran from approximately 1851 to the late 1860s, the population of Australia nearly tripled when gold prospectors, known in Australia as ‘Diggers’, poured into Victoria from Britain, America, China, France, Italy, Germany, Poland and Hungary.

The State of Victoria contributed more than one third of the world’s gold output in the 1850s and in just two years the State’s population had grown from 77,000 to 540,00.

As soon as I walked in the gates to Sovereign Hill, I felt as if I had entered a time warp to a nineteenth century frontier town. 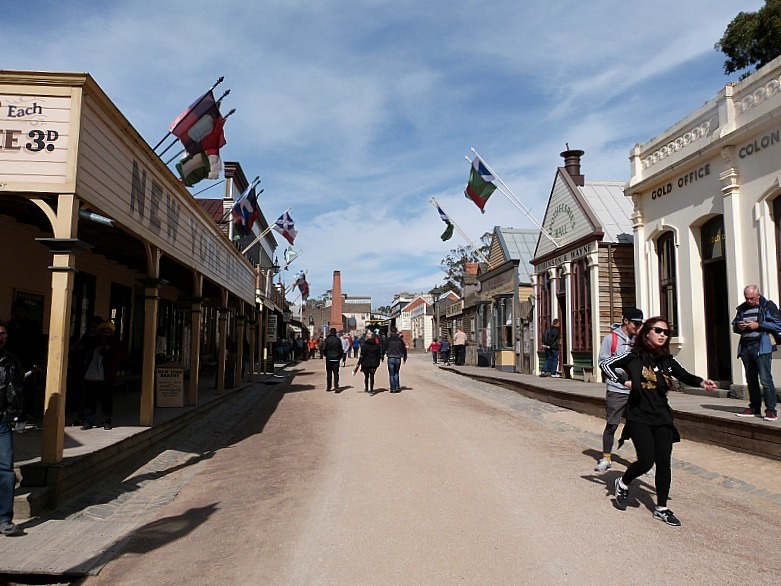 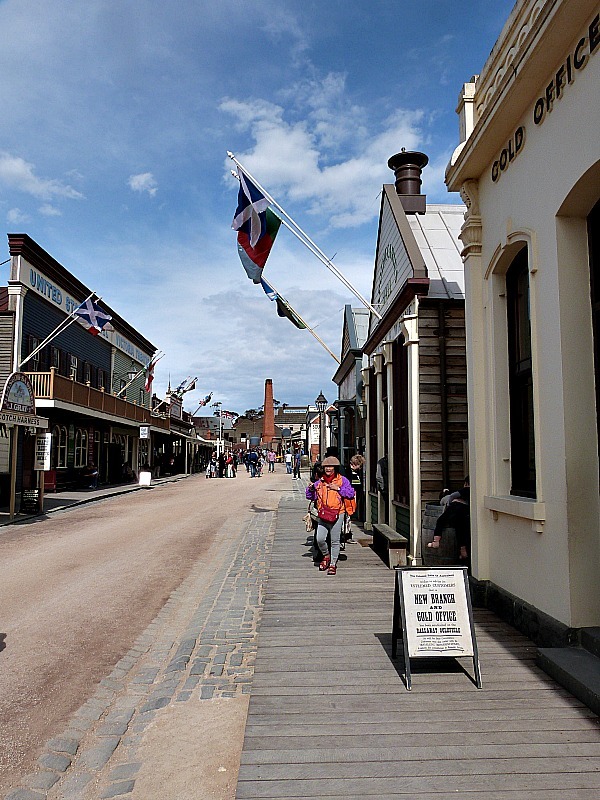 We walked up the dusty main street, flanked with Victorian wooden buildings and traversed by heavy horse-drawn wagons; encountering actors dressed in period clothing along the way.

A ‘policeman’ patrolled the streets, looking for trouble makers. Ladies in full skirts and bonnets were strolling the footpath. Men in britches and hats sauntered across the road. 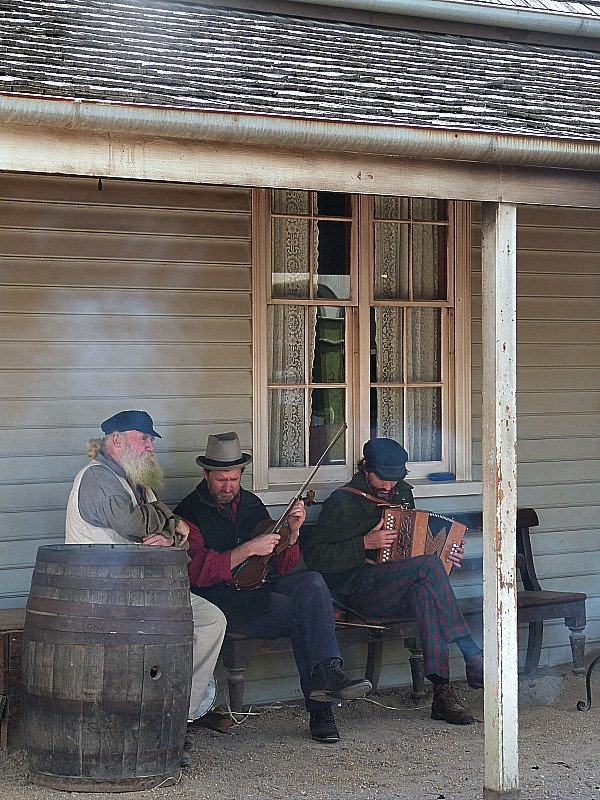 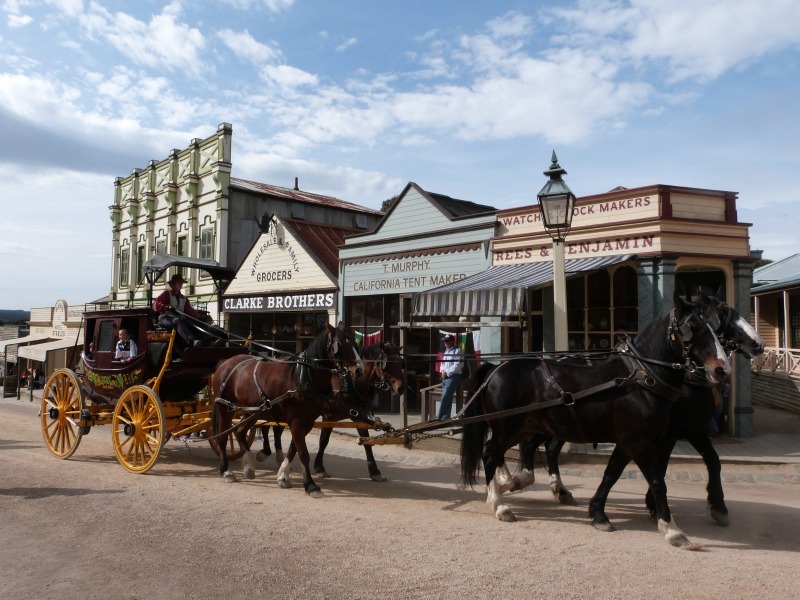 It could have felt cheesy but it had a feeling of authenticity, mainly due to the attention to detail. 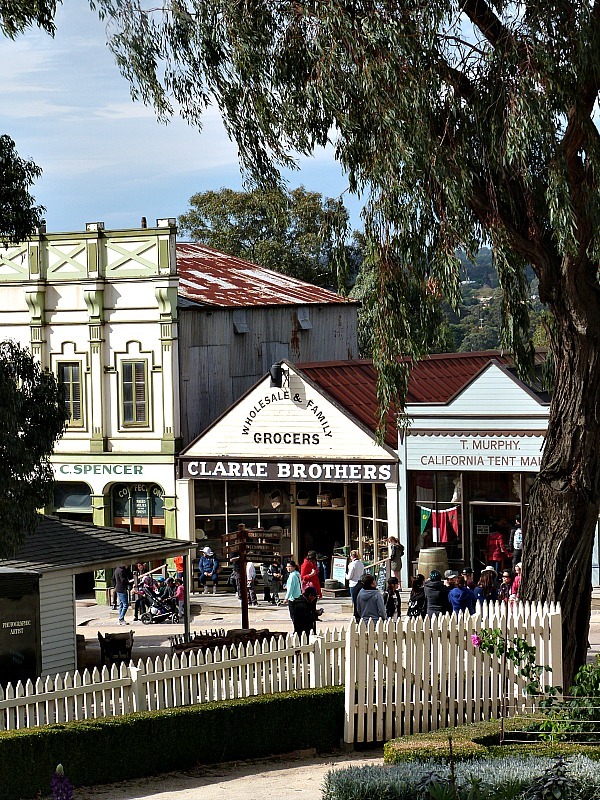 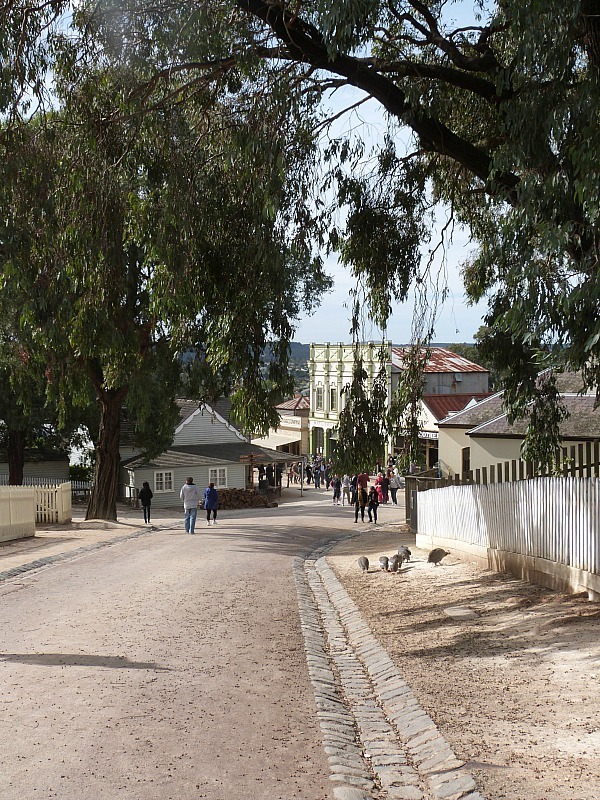 Shops lined the streets, all with windows full of period-relevant merchandise. You could enter all of the shops along Main Street and actually buy the merchandise at several of them. All of the sales people were also in period costume, playing their parts to perfection. 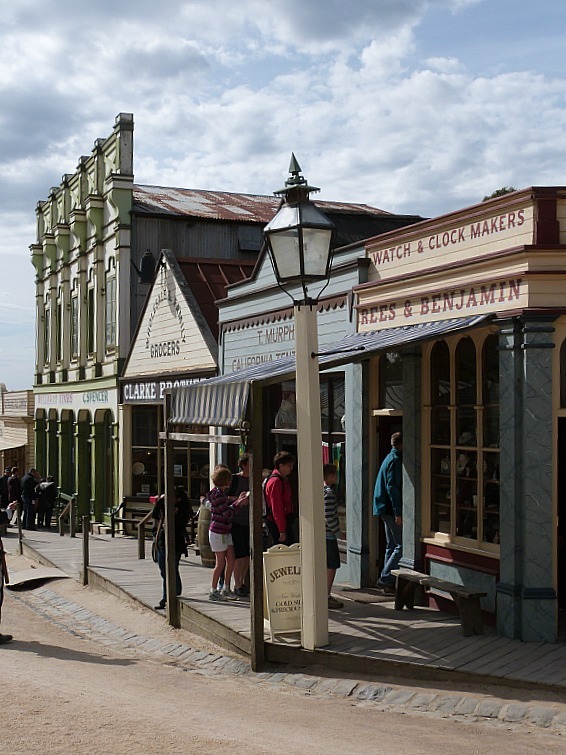 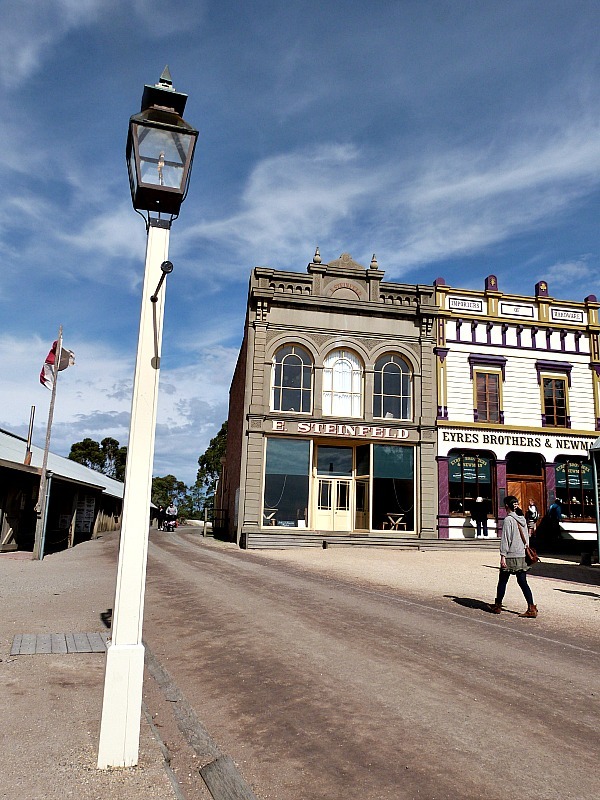 We watched candles being dipped, wagon wheels being hammered together, posters being printed and horseshoes being shaped.

I love how interactive the Sovereign Hill experience is and that the people working there had a chance to learn trades that are no longer practiced in everyday life. 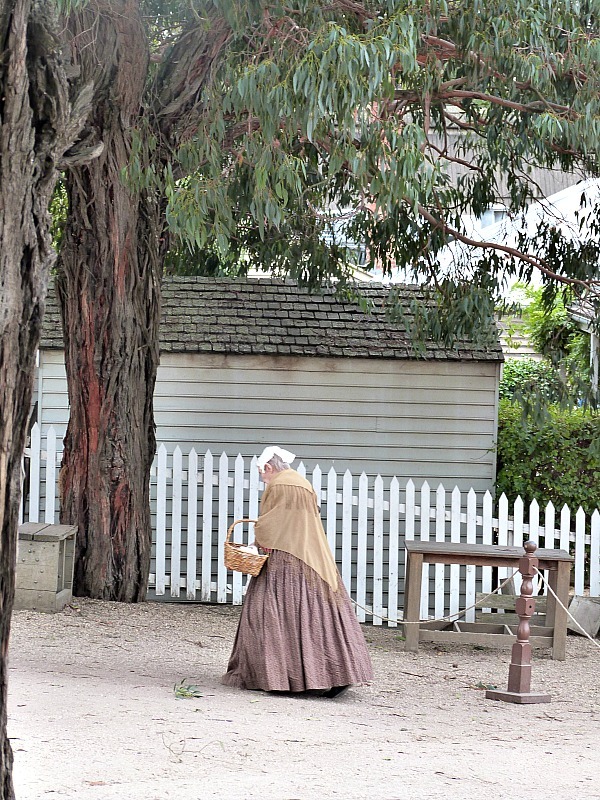 There is certainly a romanticism about the simpler times of past although I bet it was a hard life, where everyday things that we take for granted now, like doing a load of washing, took hours and a lot of elbow grease.

Along with the authentic shops, there were also a few authentic places to eat including a couple of Bakeries and Hotels. We had soup and bread for lunch in the New York Bakery which was set up like a tea room with the waitresses in hoop skirts and frilly aprons. Homemade cookies sat in delicate glass jars on the counter. 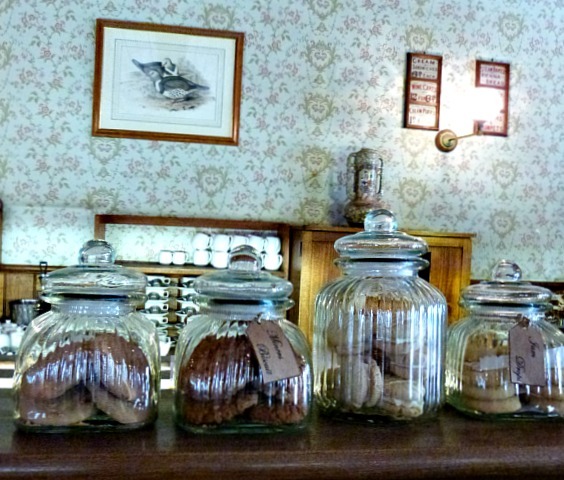 I love the busyness and clashing patterns of the wallpaper and carpets that was commonplace in the Victorian era. No washed out Ikea décor here.

We caught the end of a song and dance number at the ornately decorated Theatre and were tempted to grab a drink at the bar of the United States Hotel. 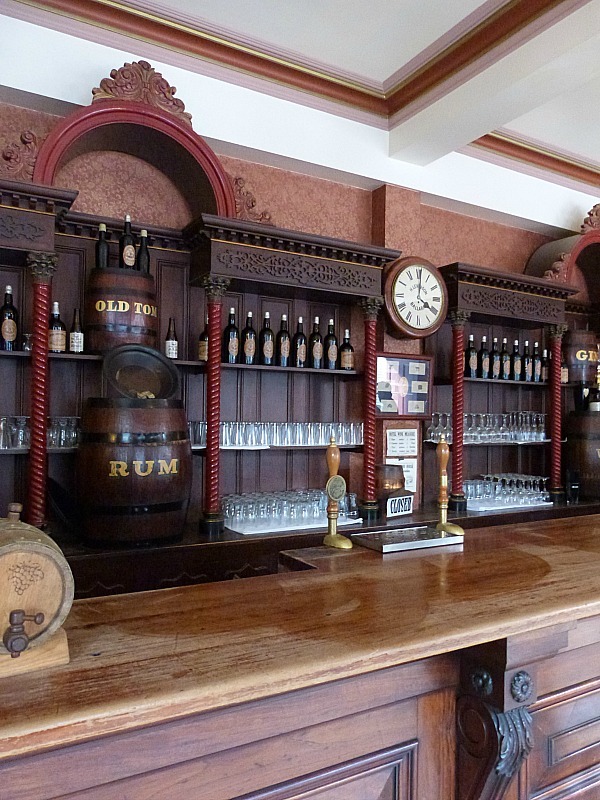 I wish we had longer to sit back and relax a little more, with more time to soak it all in. I was running around like a kid, excited and trying to see everything at once. I didn’t want to miss anything.

Up on a hill above Main Street there were small cottages with lumpy, quilt-covered beds and a schoolhouse with cute little desks, cursive sentences were written in chalk on the blackboard at the front of the room. 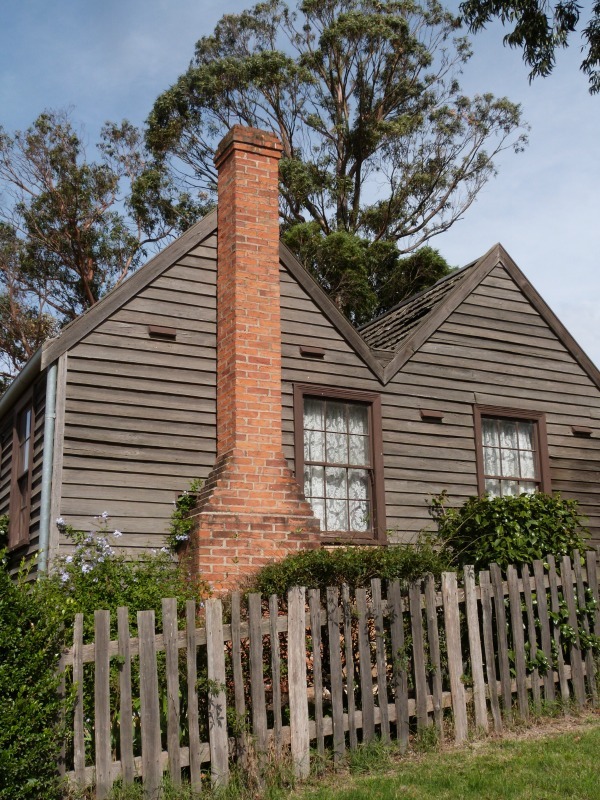 Red Coat Soldiers marched along the street below and stopped in lines to display their prowess at musket firing for the crowd to see. Smoke billowed from their barrels after loud pops sounded out, blanks of course. 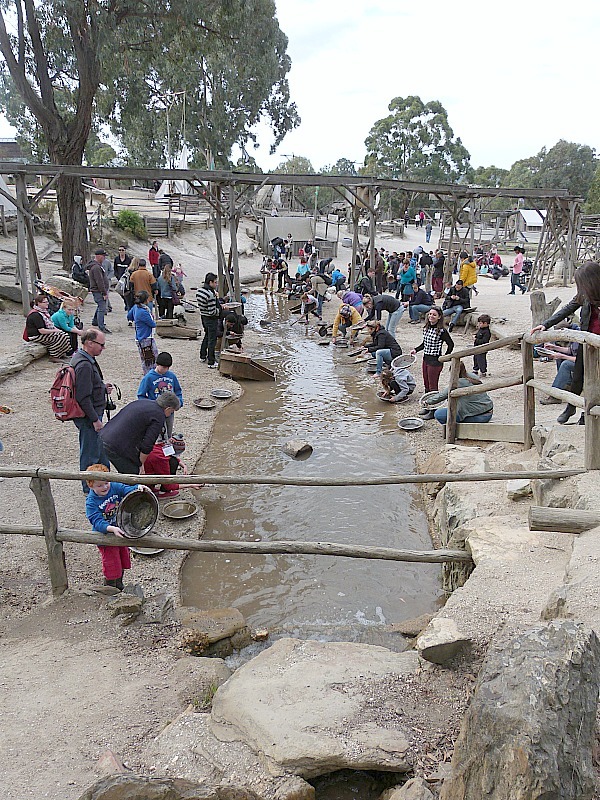 In the Diggings Creek, we panned for ‘gold’ before checking out the Chinese Miners camp. We visited the consecrated Chinese temple, the store and the herbalist’s huts, but what struck me the most was the spartan nature of the tents that they lived in.

With flimsy canvas walls and small beds made of hessian sacks and straw, the Chinese miners lived rougher than most on the Goldfields. 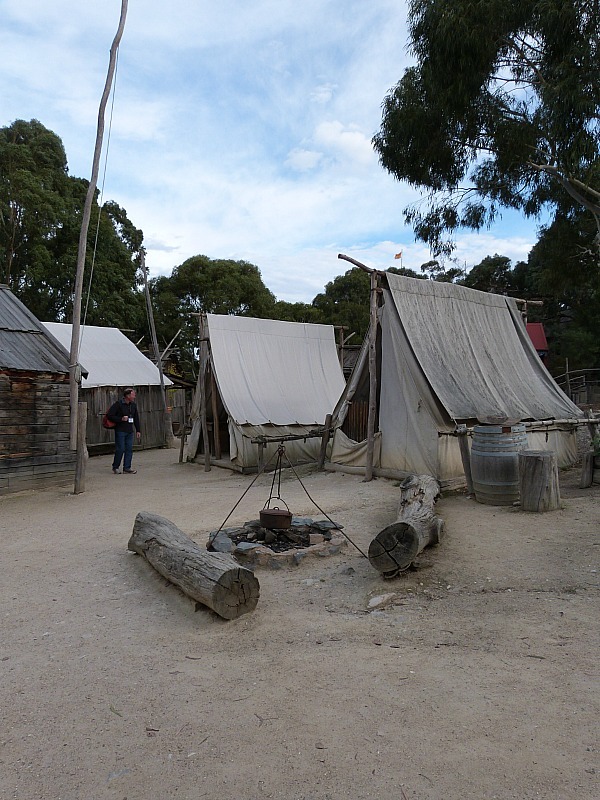 They were also subjected to extreme racism.

Unfortunately this wasn’t unique to Australia’s gold fields with Chinese miners in New Zealand, Canada and USA suffering the same prejudices. The European miners were worried that cheap Chinese labour would take European jobs and that the Chinese were taking the gold out of Australia.

This combined with the fear of a people that were culturally and religiously so different to them; it sparked a deep hatred of the Chinese Miners which often erupted into violence. It even led to legislation being put in place to restrict Chinese immigration to Australia.

There were no costumed actors here, just disembodied voices and sounds on a loop recording, coming out of some of the tents and huts. 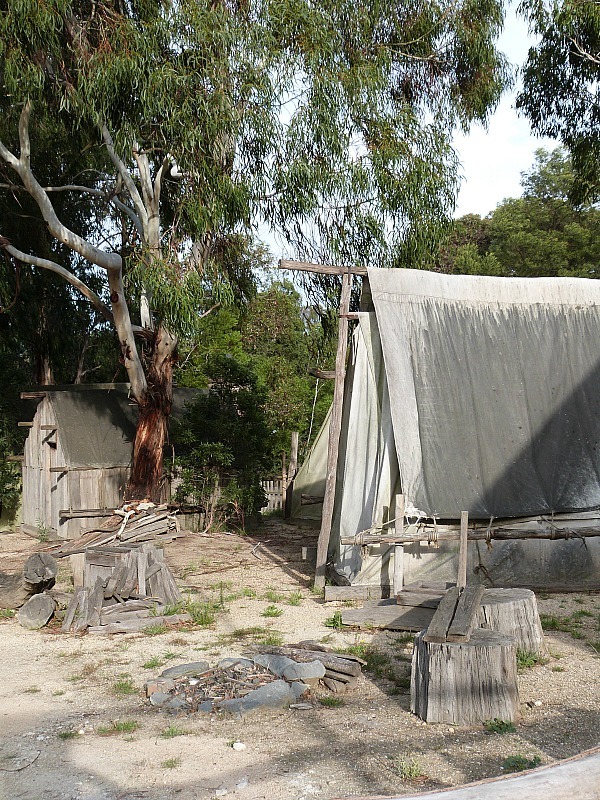 Away from the quiet of the under-visited Chinese Miner’s Camp, one very unique experience we had was watching a gold smelting demonstration. $100,000 worth of gold was melted and poured into a mould where, after being submerged in freezing water, it was cool to the touch when only moments earlier it would have burnt through your hand.

It was pretty amazing how bright it glowed when it was in liquid form; it almost hurt my eyes to look at it.

There was a lot of heavy machinery which was used in various stages during the mining of gold. I chatted to an ‘Engineer’ who was operating a piece of heavy duty steam powered machinery and patted his cat who was curled up on a bench where the warm air from the fires were warming its fur.

It was a warm retreat from the cold outside and we lingered for a while. I didn’t find out exactly what the machine did, I was too preoccupied with the cat.

Despite feeling rushed, overall I really enjoyed our time at Sovereign Hill and was impressed by the level of dedication put into recreating an authentic Victorian Gold Mining town.

If I had any gripes it would have to be the cost. At $49.50 per person it was expensive, and didn’t even include all of the activities once inside such as the coach rides, gold mine tour and the evening Sound and Light Show which were all an additional charge.

It would have been nice to see even more actors wandering around as we mainly saw them doing the demonstrations or selling things in the shops along the main street, and we didn’t see any in the Chinese Miners Camp.

There is something very special about experiencing history for yourself, rather than just reading about it in books or seeing it in movies.

Sovereign Hill is about as close as you can come to experiencing what life was like during the Gold Rush, and that in itself makes it worth the entry fee.