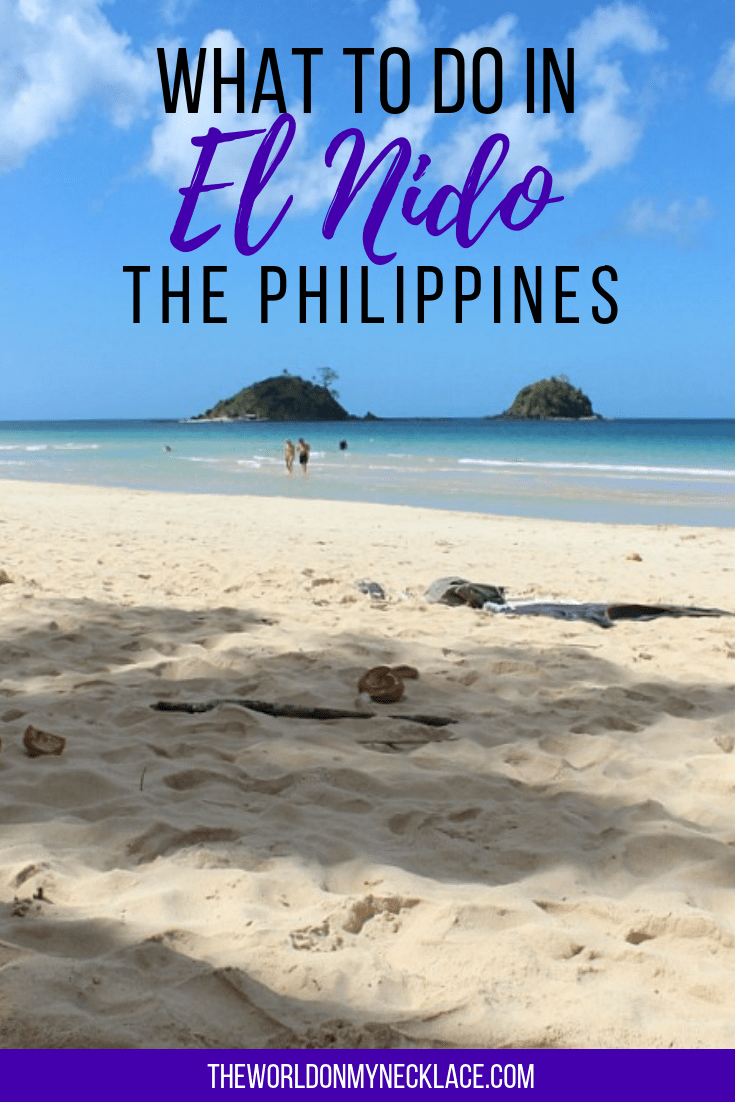 After spending New Years in rough and ready Coron, the first thing that struck me as we were pulling into El Nido, Palawan after seven hours on a ferry, was how much more developed it felt in comparison.

But also – how much prettier it is.

Emerald green water, towering limestone cliffs and lush green jungle abounded. Avatar popped into my head and that is exactly what this magical place looked like – Pandora, the Na’vi people’s home in the movie Avatar.

I was impressed. I had heard how beautiful El Nido, Palawan and its surrounding islands were and already the beauty was smacking me in the face before I had even officially arrived into port.

El Nido is a town and municipality on Palawan island in the Philippines. It is fast becoming one of the hot spots for backpacker tourism in the Philippines, and it’s obvious why. Seriously, this place is drop-dead gorgeous.

El Nido is the gateway to the Bacuit Archipelago and these islands are home to the epic scenery that Palawan is famous for. Further south in Palawan is Puerto Princesa and the underground river, one of the New 7 Wonders of the World and a UNESCO World Heritage Site. 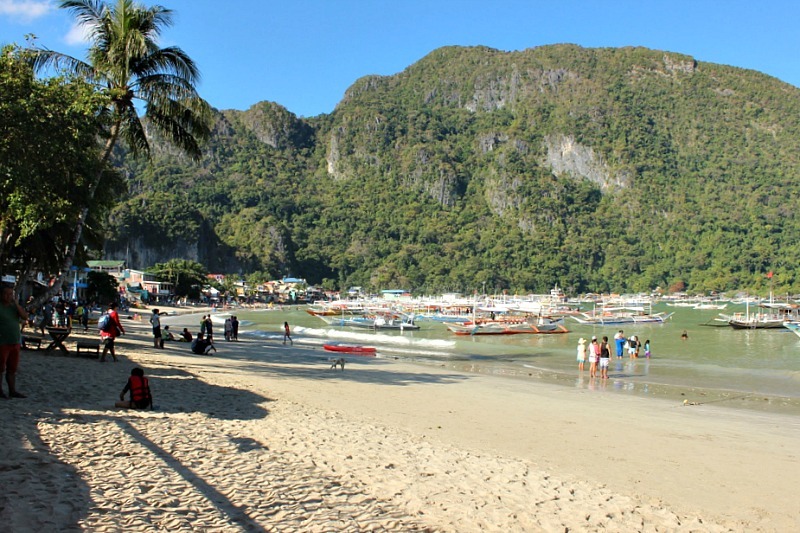 El Nido itself is an attractive town surrounded by tall, jungled cliffs with a pretty beach fringed by palms. Unlike in Boracay which has been taken over by chain restaurants and commercialisation, El Nido is still relatively under the radar, at least in comparison to many other destinations in Southeast Asia.

The main streets are bustling with people and are lined with restaurants and hotels, but it still retains a laid-back beach town vibe.

It is most definitely discovered but I still found it charming. I don’t know how much longer it will stay that way though.

The first order of business on arrival was to find somewhere to stay. It proved difficult to find somewhere affordable (read: dirt cheap), but after walking around town for about an hour, we managed to find a random little bungalow behind some shops that was going for only $10 a night.

It was pretty basic and the drainage in the bathroom was virtually non-existent, but it did the trick.

Want to find out more about Palawan Accommodation? Read this detailed guide to Palawan Hotels 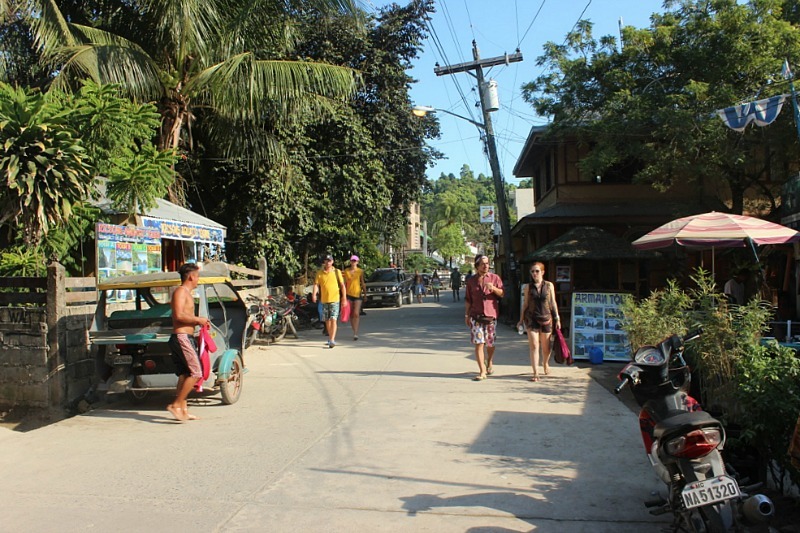 There was a lot of things I really liked about El Nido, Palawan. A big part of why I enjoyed my time there so much was because of the awesome people we met.

During the five days we were there, we were meeting people constantly. We were reunited with Toby, Johnny and Anush for a couple of nights and days of fun.

We met loads of people through Anush’s super social hostel, Our Melting Pot. We met people through the day trip boat tours we did, on the street buying empanadas, and we even bumped into a work mate of Trav’s and some friends of friends from London just walking down the street.

Sometimes it can be hard to meet people when you are travelling as a couple but in El Nido – the opposite was true. We found it impossible not to meet people.

And it was awesome. 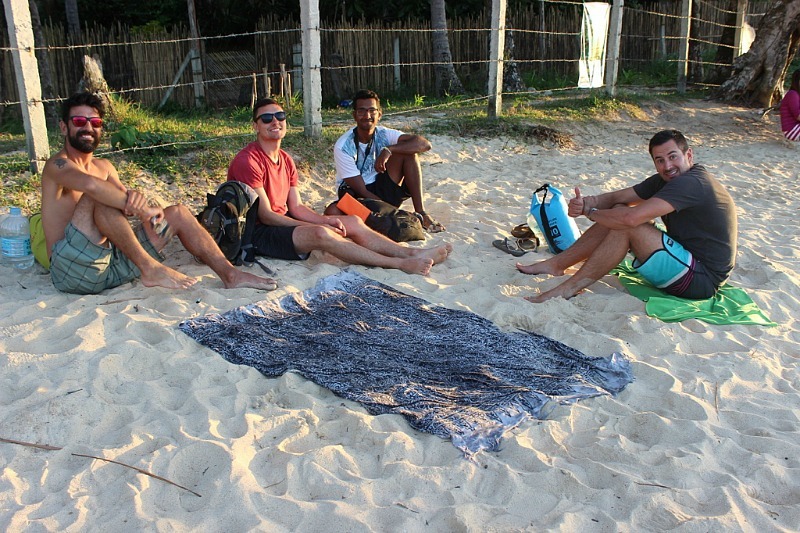 One evening about 15 of us ate curry and pizza at Little India on Real Street, washed down with delicious margaritas. Another evening it was Karaoke where our boat guide Filipino John blew everyone away with his singing skills. There were drinks at the Reggae Bar on the beach, and burrito group dinners at LC’s.

Every night we went out to eat and for a few drinks, the group members differing each evening, but it was always fun and always lively.

One of my favourite moments from our time in El Nido was when a group of us were sitting outside Our Melting Pot waiting for a few friends to get ready. The hostel started playing music and a few local boys were dancing across the street, really getting into it. One of the guys with us, American John, decided to go and join them.

Seeing this tall white guy dancing ridiculously with a group of super skinny little Filipino boys, all dancing like their lives depended on it, was one of the funniest things I had seen in ages.

And then there was the food. 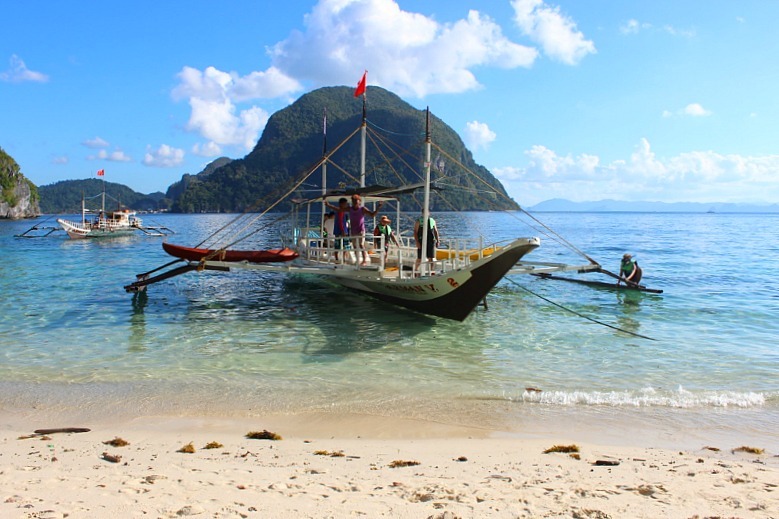 The best mission style burritos I have ever eaten at LC’s Burrito Bar, fried fish at the restaurants on the beach, amazing sugar donuts from Midtown Bakery, French crepes and chilean empanada from food stands along Calle Hama, sweet fruit smoothies, wood-fired pizza, creamy daal curry and the best french bread I ate during my time in Asia.

The dining scene is diverse in El Nido, with restaurants representing at least twenty countries around the world.

After largely finding the food in the Philippines disappointing, my experience with the food in El Nido was a very pleasant surprise.

But we had’t come to El Nido to just hang out with new friends and stuff our faces (although I won’t lie, doing those things was A LOT of fun). We came for the island-hopping tours, and I am going to write about my experience on these tours very soon.

What we found was that there are also some pretty beautiful spots around El Nido that didn’t require a tour to reach.

One day a bunch of us hired motorbikes and scooters for a day of exploring. First stop: Nacpan Beach. 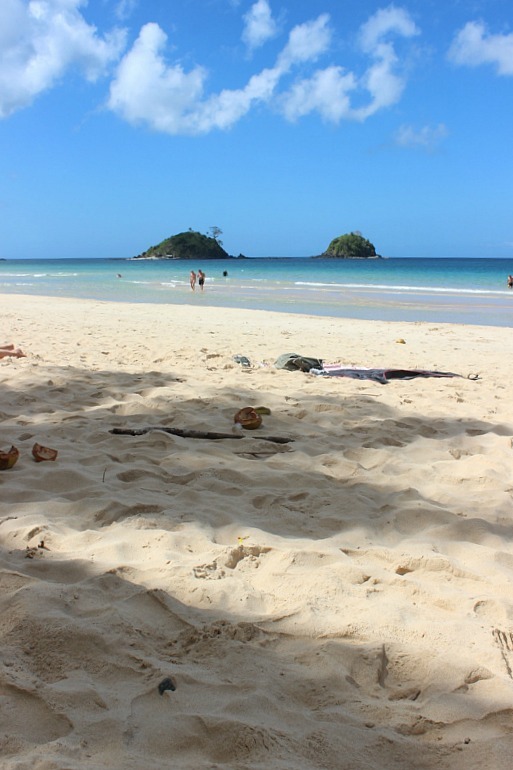 The drive itself to Nacpan Beach was pretty spectacular. Lush scenery surrounded us as we drove along quiet country roads. We passed long grass swaying in the wind, rice paddies of fluorescent green, palm trees were everywhere and thick vines grew like weeds on giant trees that shaded the road.

Nacpan beach was so beautiful, and it reminded me so much of the beaches in Northland, New Zealand. Small offshore islands dotted the horizon and the beach was a long stretch of clean white sand backed by palm trees. The bright blue water looked super inviting. Tiny waves lapped the shore.

It was a sight to behold.

We spent a couple of hours lounging on the beach and swimming in the perfect water. Lunch was at the only beach restaurant, just a simple meal of fries and salad.

Back towards El Nido town, over some rounded hills with incredible coastal views, is Las Cabanas beach – a thin crescent of golden sand with still, emerald water. This is where you come for the sunset in El Nido, Palawan. 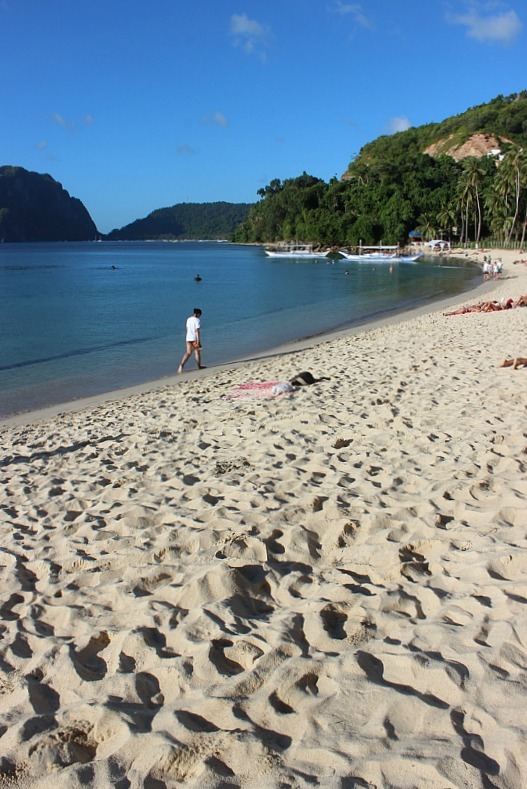 Accessed via steep stairs from a hilltop, Las Cabanas was a lot more crowded than Nacpan with a pumping beach bar, and people sitting on the sand, waiting for the sunset.

As the sky lit up orange, we began the return journey to El Nido. We didn’t want to get stuck driving those crazy hills in the dark.

Another day a few of us hired a boat to take us out to Paradise beach on Cadlao Island, the closest island to El Nido. The beach was beautiful but I wouldn’t say it was paradise, my paradise wouldn’t have so much seaweed and jellyfish.

I preferred Nacpan but it was still a nice, quiet spot to while away a few hours. 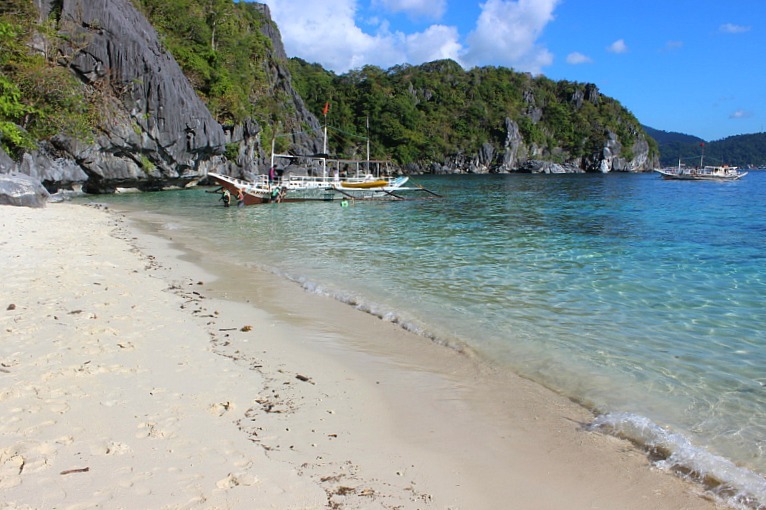 After the boat picked us up, we got the captain to take us to a remote beach around a couple of bays from El Nido town, inaccessible except by boat.

The clear waters off the beach were free of jellyfish and seaweed, and we all floated in the warm water, watching the sun sink lower in the sky until everything was lit up and glowing.

It was my favourite sunset in the Philippines. 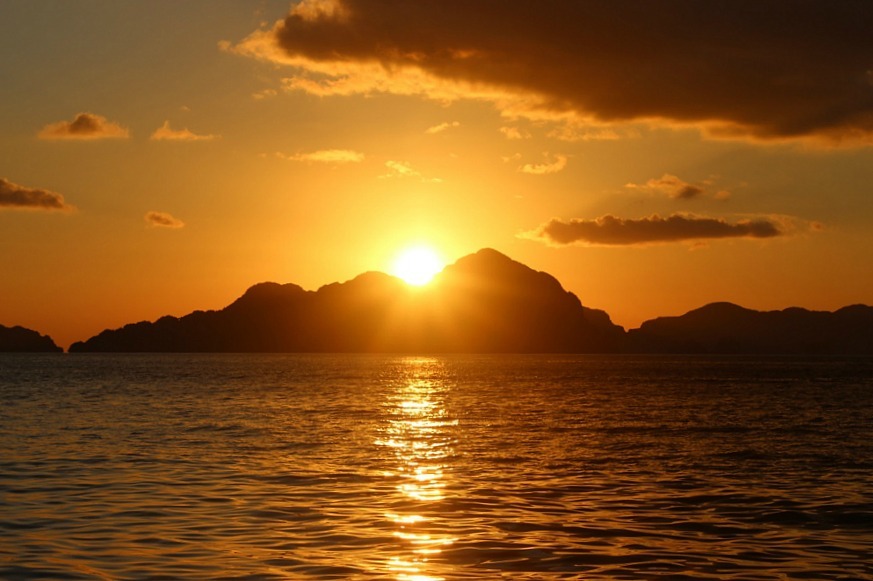 A visit to El Nido, Palawan shouldn’t be just about the island-hopping tours. Make sure you get out there and explore some of the things you can do independently in El Nido – go beach hopping, cruise around the island on scooters, kayak or hire a boat to one of the nearby islands or a remote beach.

And eat all the good food while you can.

Have you been to El Nido, Palawan? What did you think? 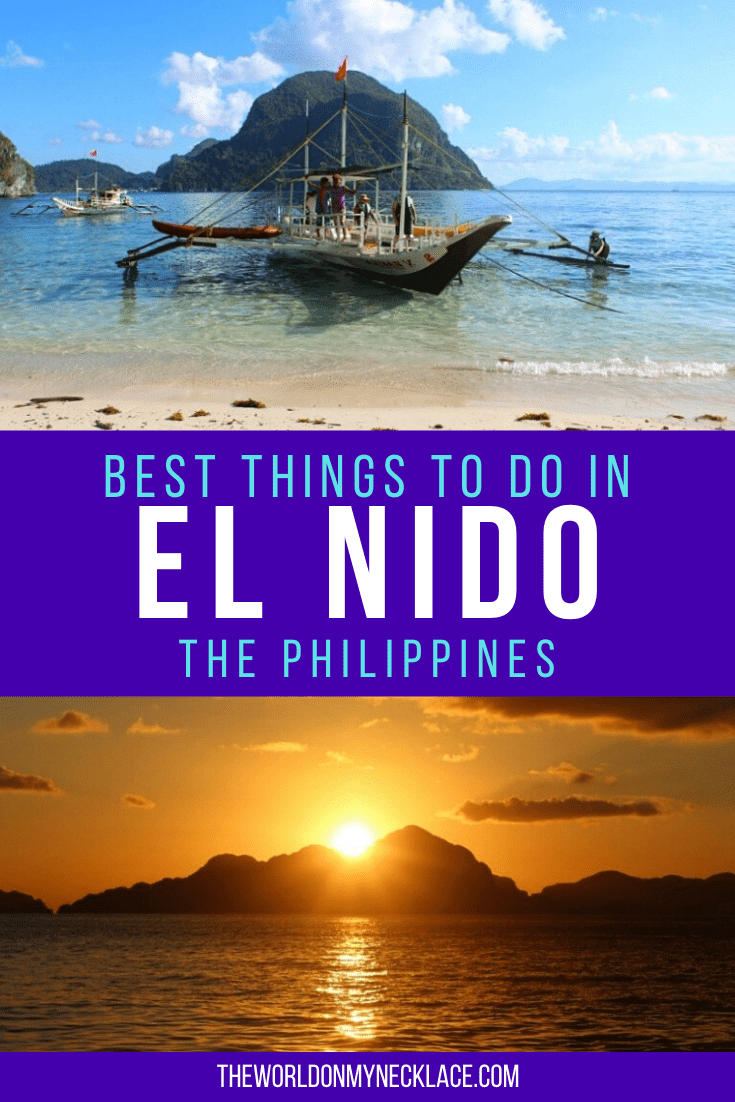